Racing has been an integral part of Yamaha’s DNA from the day that the factory was incorporated on July 1st, 1955. At the time, the company proved its products on the racetrack just days after Yamaha Motor Company was founded, when the YA-1 won the Mount Fuji Ascent Race at its very first attempt on July 10th. 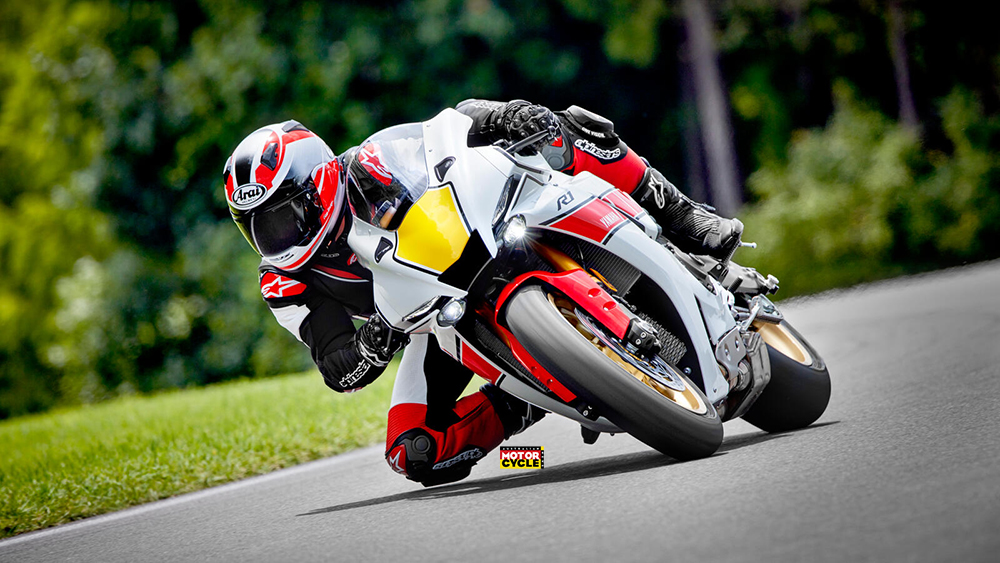 Spurred on by this success, Yamaha entered its first international race at Catalina, USA in 1958. By now the company was developing some of the most competitive 2-stroke machines, and the decision was made to experience the ultimate test of rider and machine by entering the 250cc RD48 race bike in the World Championship Grand Prix round in France in May 1961. Competing at the highest level put the company firmly on the map and marked the beginning of the brand’s transformation into one of the world’s most successful and innovative motorcycle manufacturers. 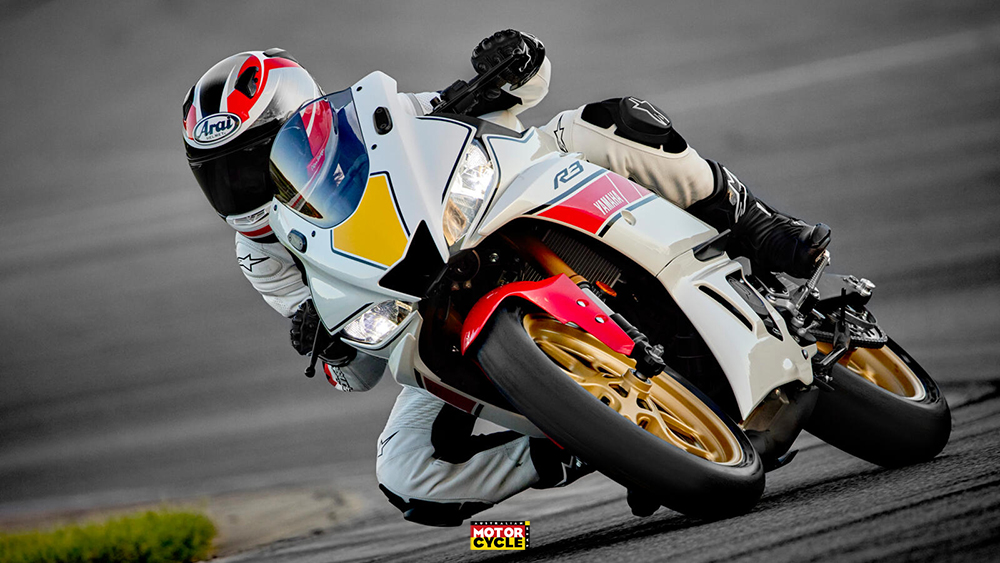 Just two years after Yamaha’s debut GP, Fumio Ito took the brand’s first ever GP win on the RD56 at the Belgian Grand Prix, and the company has never looked back since that day. 1964 saw Yamaha win its first World Championship as well as its first Constructor’s title with Phil Read in the 250cc class, the first of many victories in that decade. It was the beginning an incredible journey for everyone involved in the company’s race programme, and during the past 60 years Yamaha has established itself as one of the most successful manufacturers with over 500 Grand Prix race wins, along with 38 rider titles, 37 constructor titles and 7 team titles. 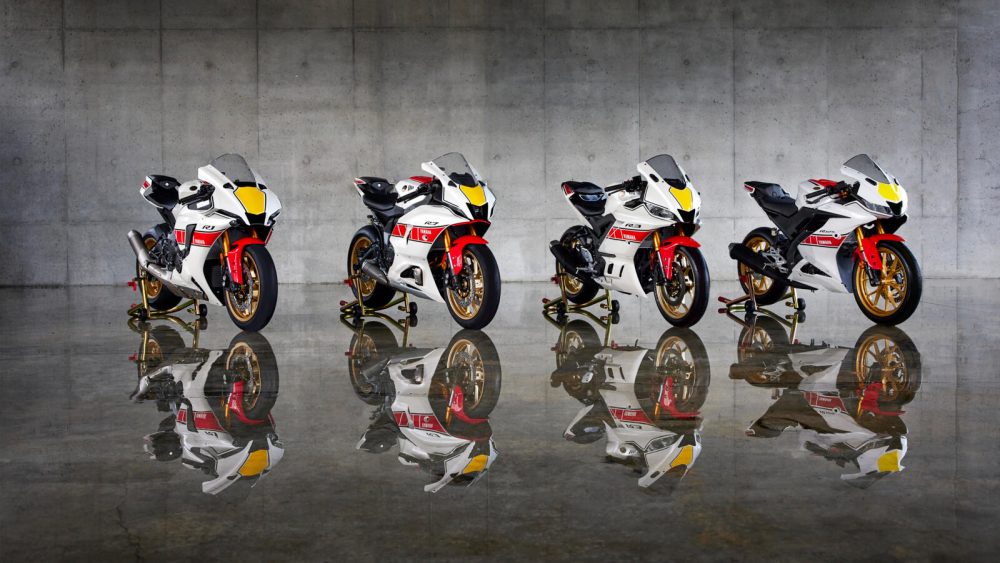 In 1964 the competition department debuted their 250cc Grand Prix racer with a new white fairing with a solid red stripe and red front fender. It proved to be a good omen, and factory rider Phil Read went on to win Yamaha’s first ever world title.

This bold, simple and dynamic red/white colour scheme soon established itself as the instantly-recognisable Yamaha look in Grand Prix road racing, and was the forerunner to Yamaha speed block: arguably the most famous and best loved colour scheme ever featured on a racing motorcycle. 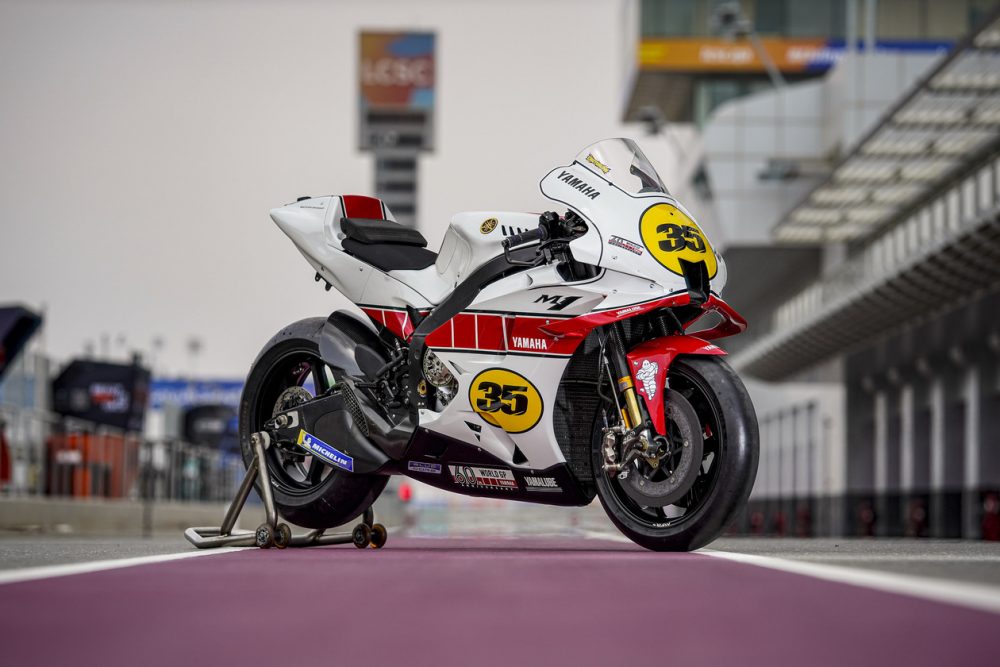 A white fairing with red speed block rapidly established itself as the definitive Yamaha racing colour scheme in Europe for the next two decades right through to the Rainey and Lawson era. The incredible public reaction to the recent unveiling of the factory M1 with its special 60th Anniversary speed block colours demonstrates that it is one of the company’s most evocative colour schemes that is popular with riders and fans of all ages. Simple, dynamic, timeless and instantly recognizable, speed block will forever be associated with Yamaha and its highly successful GP campaigns from a very special era in the company’s history. 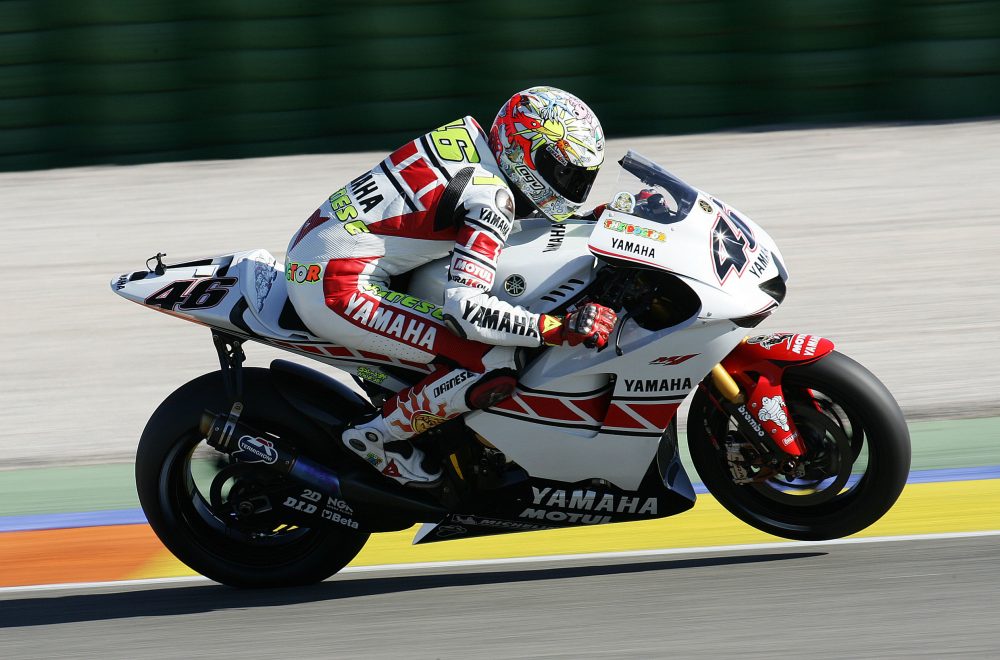 Since Yamaha made its GP debut in 1961, the company has achieved over 500 Grand Prix race wins with legendary riders including Read, Ivy, Saarinen, Agostini, Roberts, Lawson, Rainey, Lorenzo and Rossi, and more recently Quartararo – and these historic racing colours highlight the connection between Yamaha’s race bikes and every R-Series model. 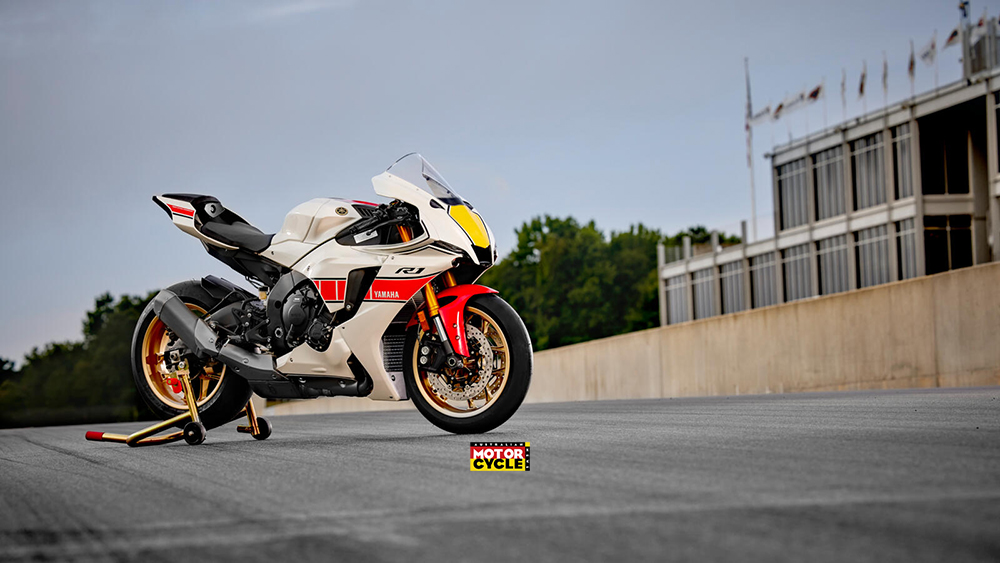 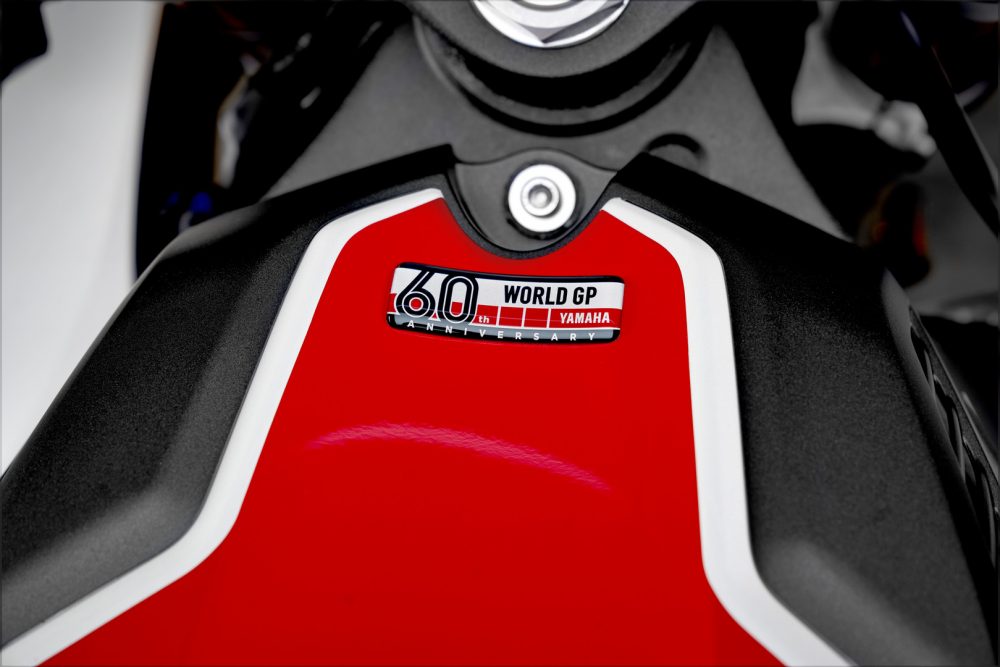 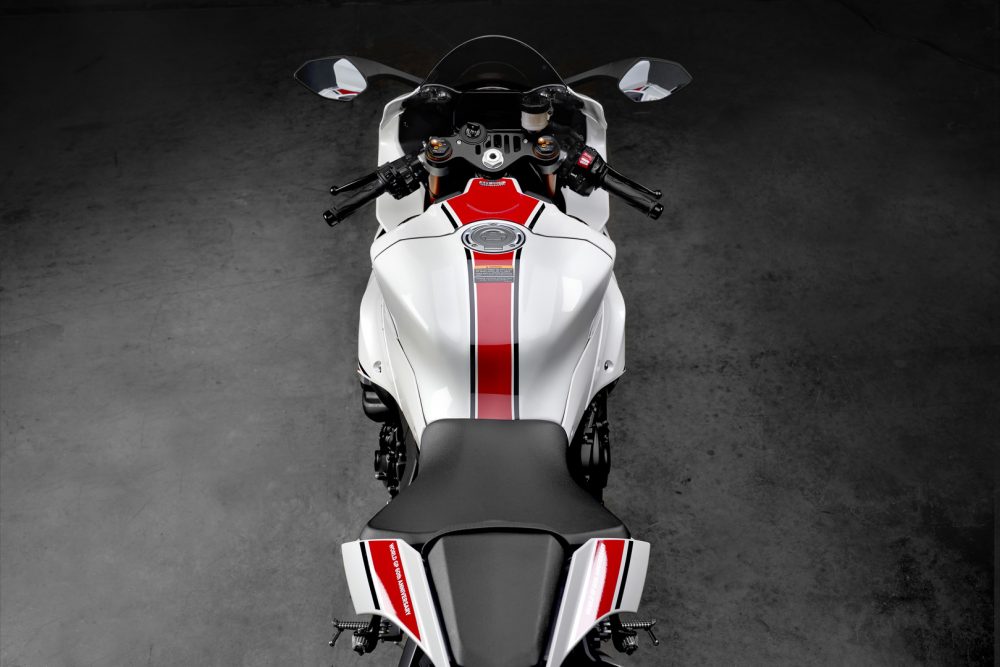 Red stripe along top of tank and tail 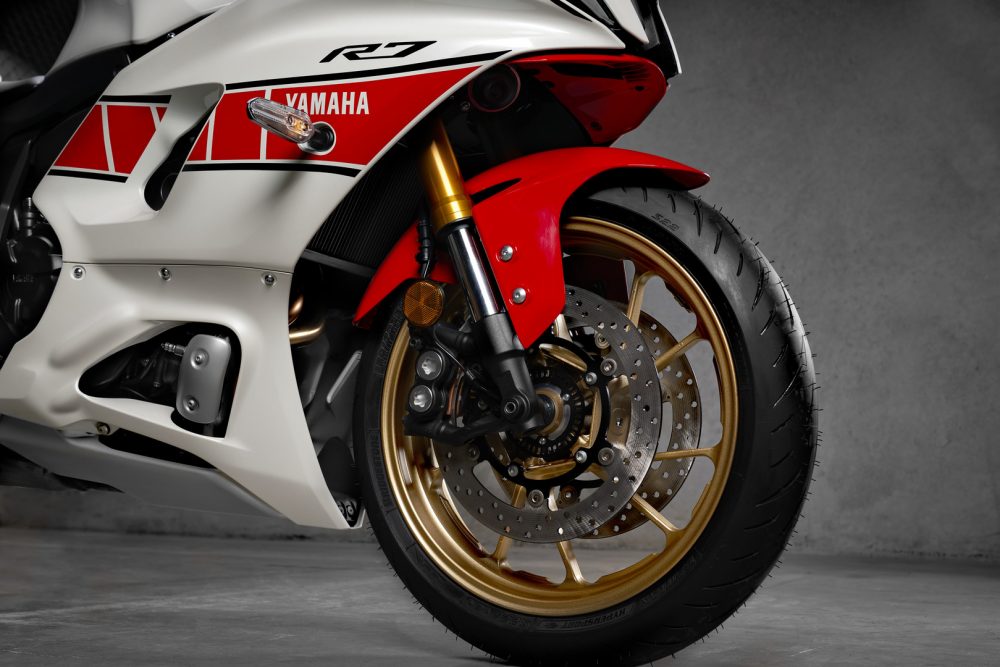 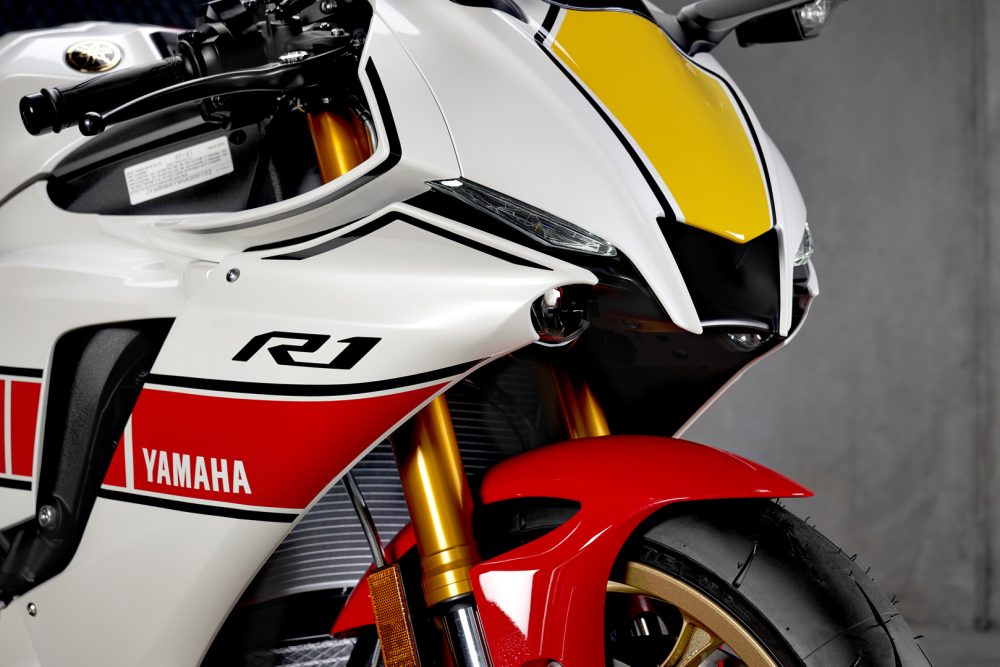 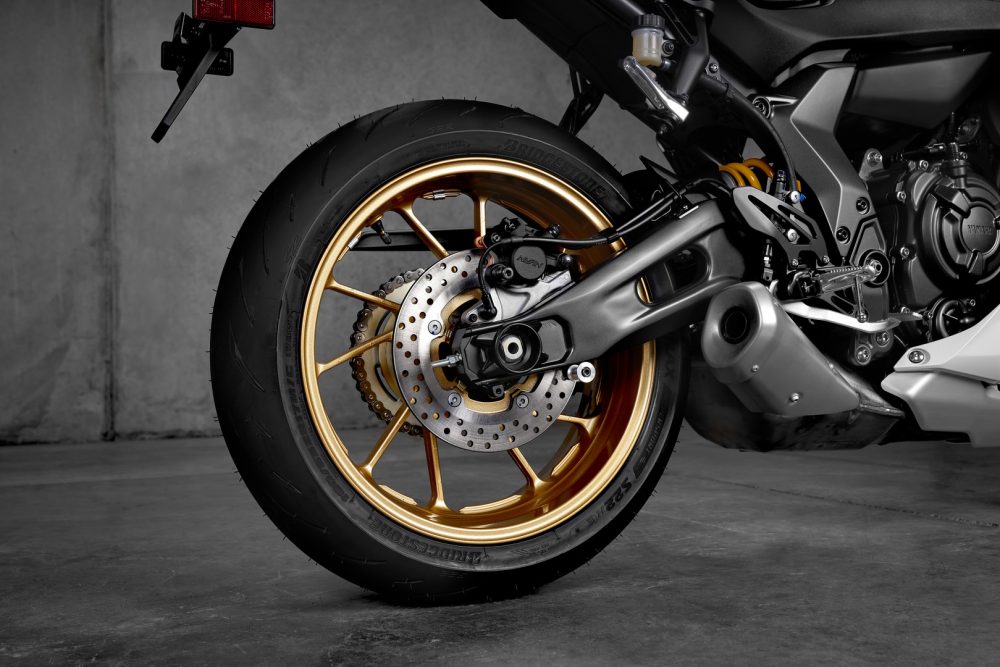 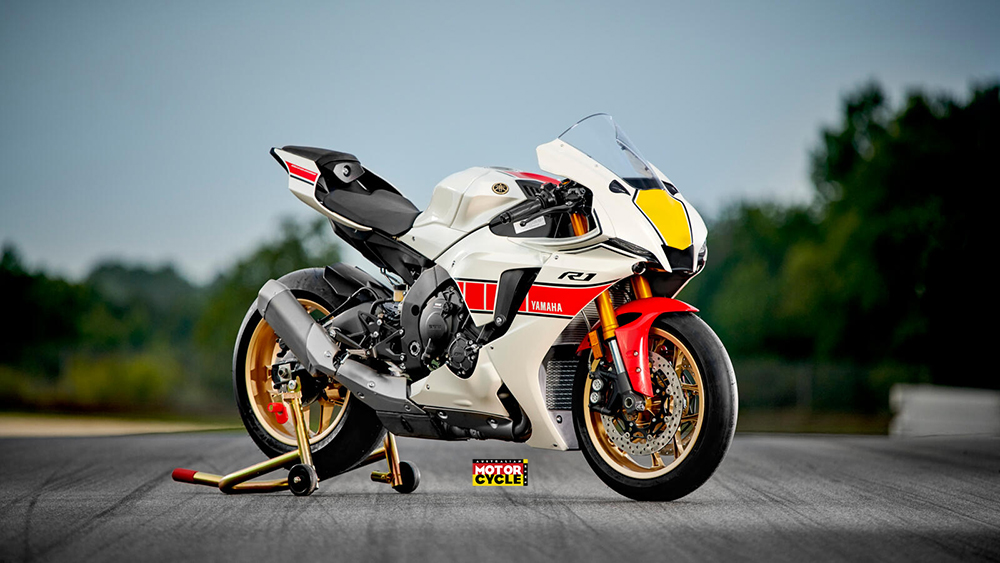 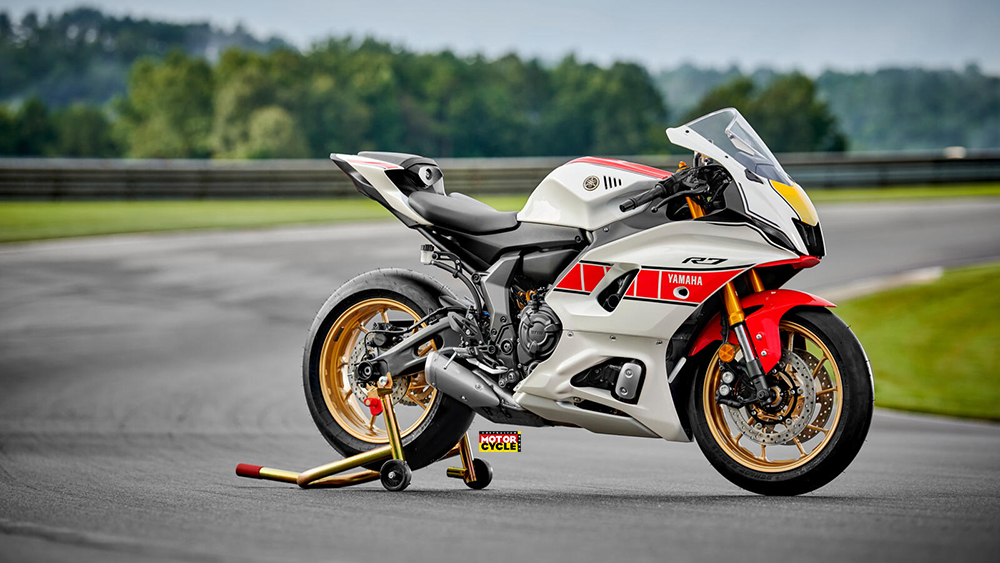 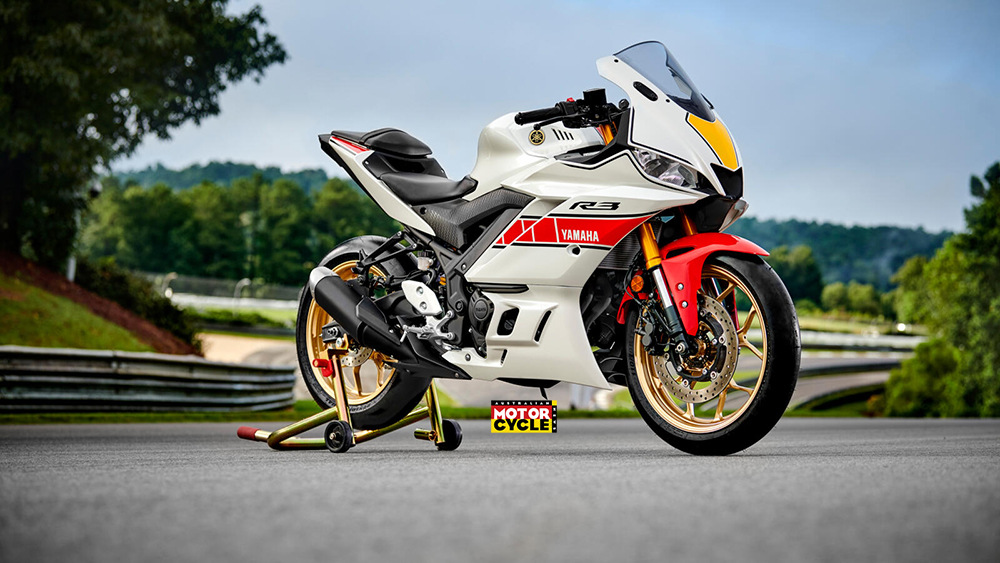 The R-Series offers a wide choice of supersport models each one of them designed and built with Yamaha’s sharply focused ‘no-compromise’ philosophy that makes this race-bred line up the most exciting of all. Click here for information on the Yamaha R-series.

Equipped with Öhlins Electronic Racing Suspension (ERS) and featuring an impressive specification that includes the most advanced electronic control technology as well as lightweight carbon bodywork, the R1M is Yamaha’s definitive track bike. For 2022 this iconic high performance supersport motorcycle will be available in a new Icon Performance colour. 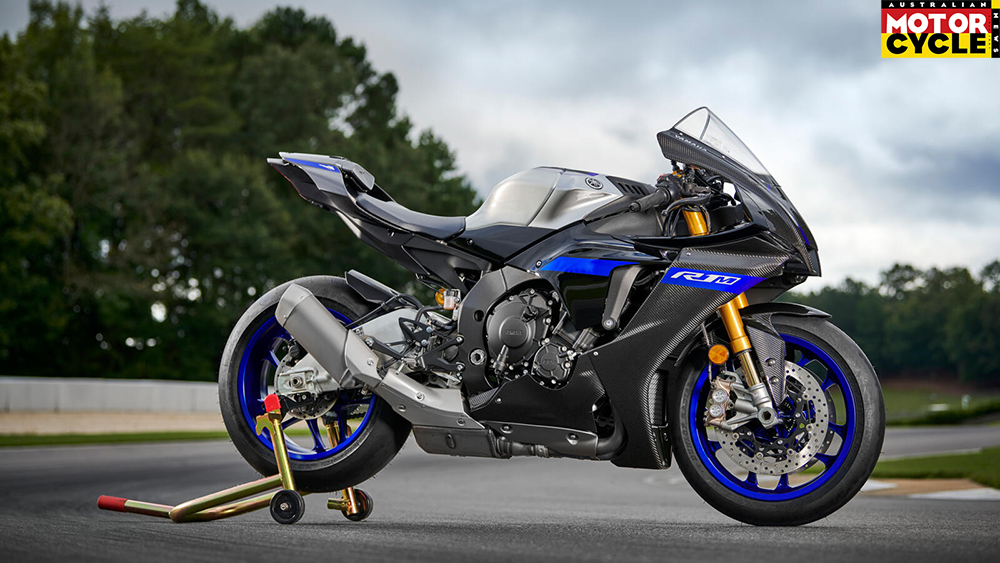 With super-aggressive M1-inspired styling combined with a lightweight chassis, high tech electronics and a 998cc EU5 crossplane engine, the R1 is always ready to get the adrenaline flowing. Available in a new duo-tone Icon Blue with dark matt blue colour option. 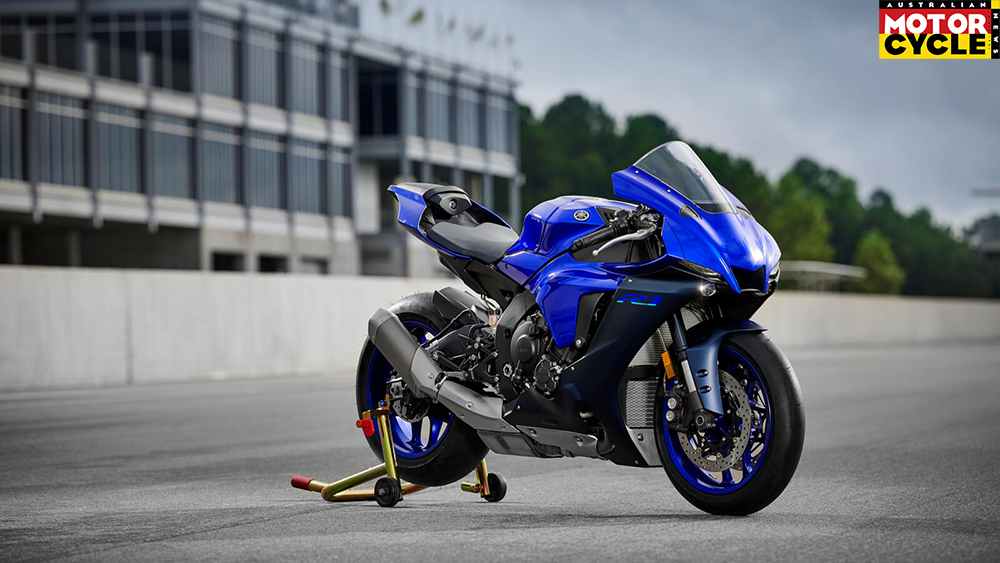 This high-revving 321cc A2-license motorcycle is the ideal step up for those riders graduating from the R15, and is the perfect preparation for the next move on up to the R7.

For 2022 the R3 engine is fully EU5 compliant, and the shape of the fairing’s lower cowl has been adapted to accommodate the new catalyser. The R3 will be available in a new Icon Blue colour which features a duo-tone finish consisting of a mixture of Icon Blue and dark matte blue for an even more sporty appearance, that reinforces the R-Series family look. The second colour for the R3 is Yamaha Black, giving the bike a stylish and dynamic look. 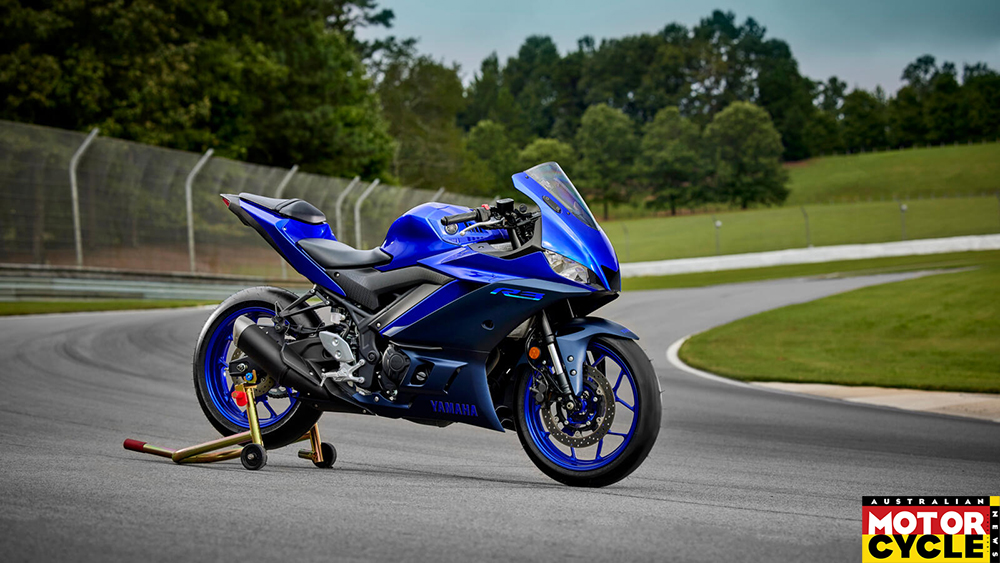 Built to the same high standards as every R-Series, the R15 gives every rider the chance to become a part of R/World. Equipped with R1-inspired bodywork and a compact Deltabox frame – as well as a high-efficiency EU5 engine and high-specification suspension and brakes, the R15 is the ultimate lightweight supersport. Available in a new duo-tone Icon Blue with dark matt blue colour option. 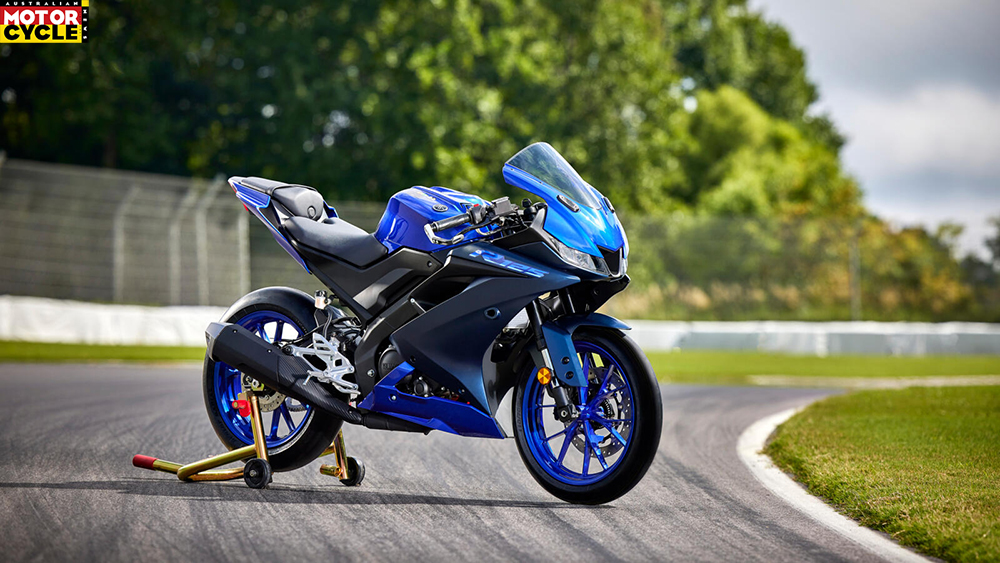 Pricing and availability for the 60th-anniversary models 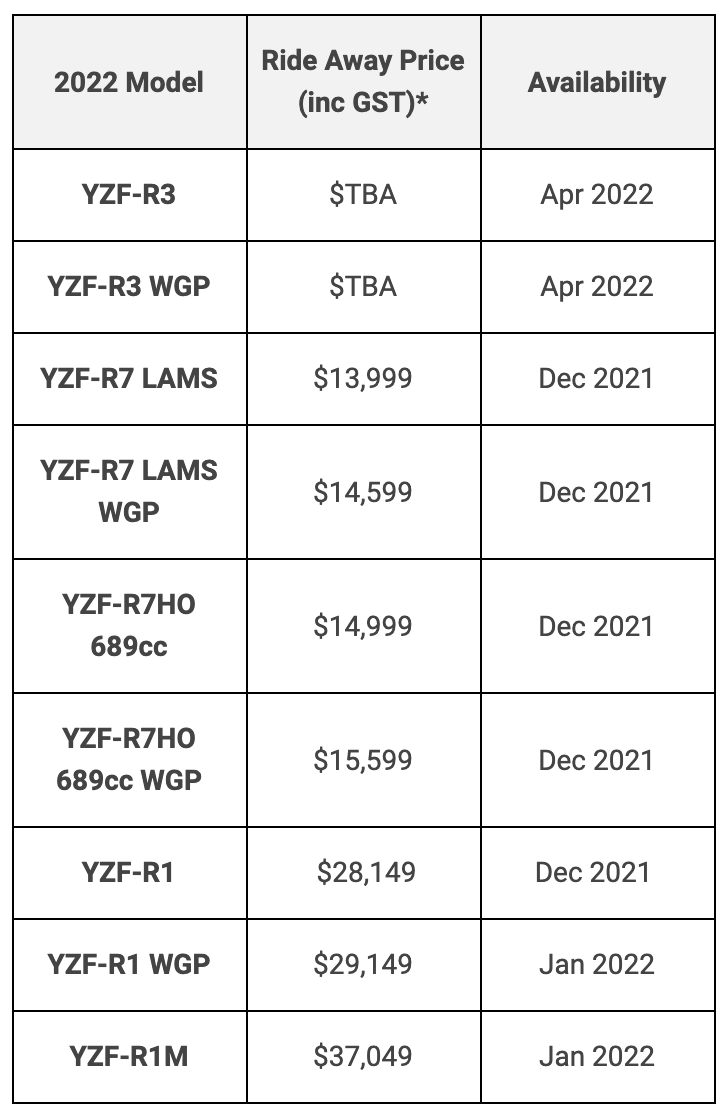