CFMoto has shrugged off any pressures of the pandemic and is launching a three-bike assault on the lucrative middleweight market. Meet the 700CL-X Heritage

I was only a couple of kays from home when I realised I forgot my damned mask. I checked my mirrors, dabbed the rear brake and chucked a U-ey. And it was halfway through this U-turn when I realised CFMoto’s all-new 700CL-X Heritage isn’t your average sub-$10k motorcycle.

Because while there’s plenty of things that you can see that tells you this bike is punching well above its weight, it’s the things you can’t see that really seal the deal. Like the balance of chassis, the excellent ergonomics and the ride quality of the suspension. For CFMoto’s first-ever midsized machine in what’s motorcycling’s fastest-growing segment, it’s seriously impressive and, importantly, a serious contender.

The Heritage is the first of a three-model 700CL-X platform, with the Sport and Adventure models set to join it in Aussie showrooms later this year. All three are based around the same impressive chassis and suspension package, and all with thoroughly convincing styling out of the Kiska design house, it’s another warning shot over the bow signalling this 32-year-old brand means business.

Before you even fire the bike into life, you can tell there’s been plenty of thought put into where it needs to slot into the market and what machines it’s going to be taking on. To my eye, the Heritage is aimed squarely at Ducati’s Scrambler Icon with its aluminium tank panels, retro styling and 18-inch front wheel, and the Heritage puts forward a very compelling argument (see sidebar). 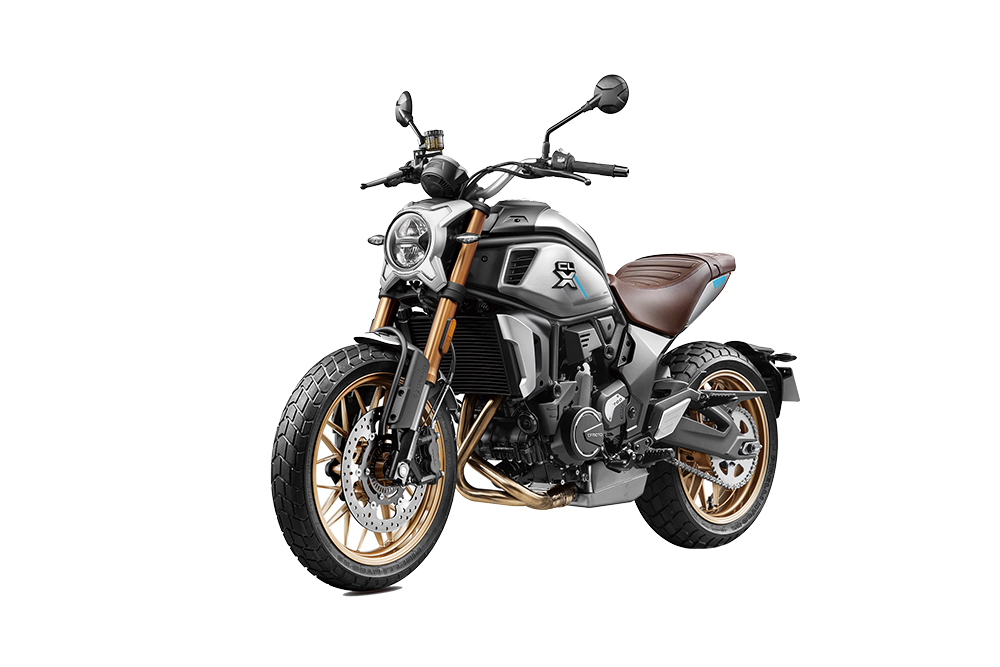 The quality of the switchblocks is another step again over the firm’s 300SR whose high quality of finish I was praising just last issue (AMCN Vol 71 No 05). Both the brake and clutch levers are span adjustable, there’s braided steel brake lines, even the ignition key looks well made. Which means nothing in terms of the bike’s ability, of course, but when you’re looking for where the corners were cut for CFMoto to be able to offer a full-powered street scrambler for a rideaway price of $9490, it’s these little details that really stand out.

Turn that key and the single, circular LCD dash comes alive before the 693cc parallel-twin engine fires into life. As it settles to idle, I note that I would prefer a deeper tone to be emitted from the stubby end can; it sounds a bit tinny to my ear, but it’s also louder than I’d prefer, so I suspect it’s a sound many others will probably like. 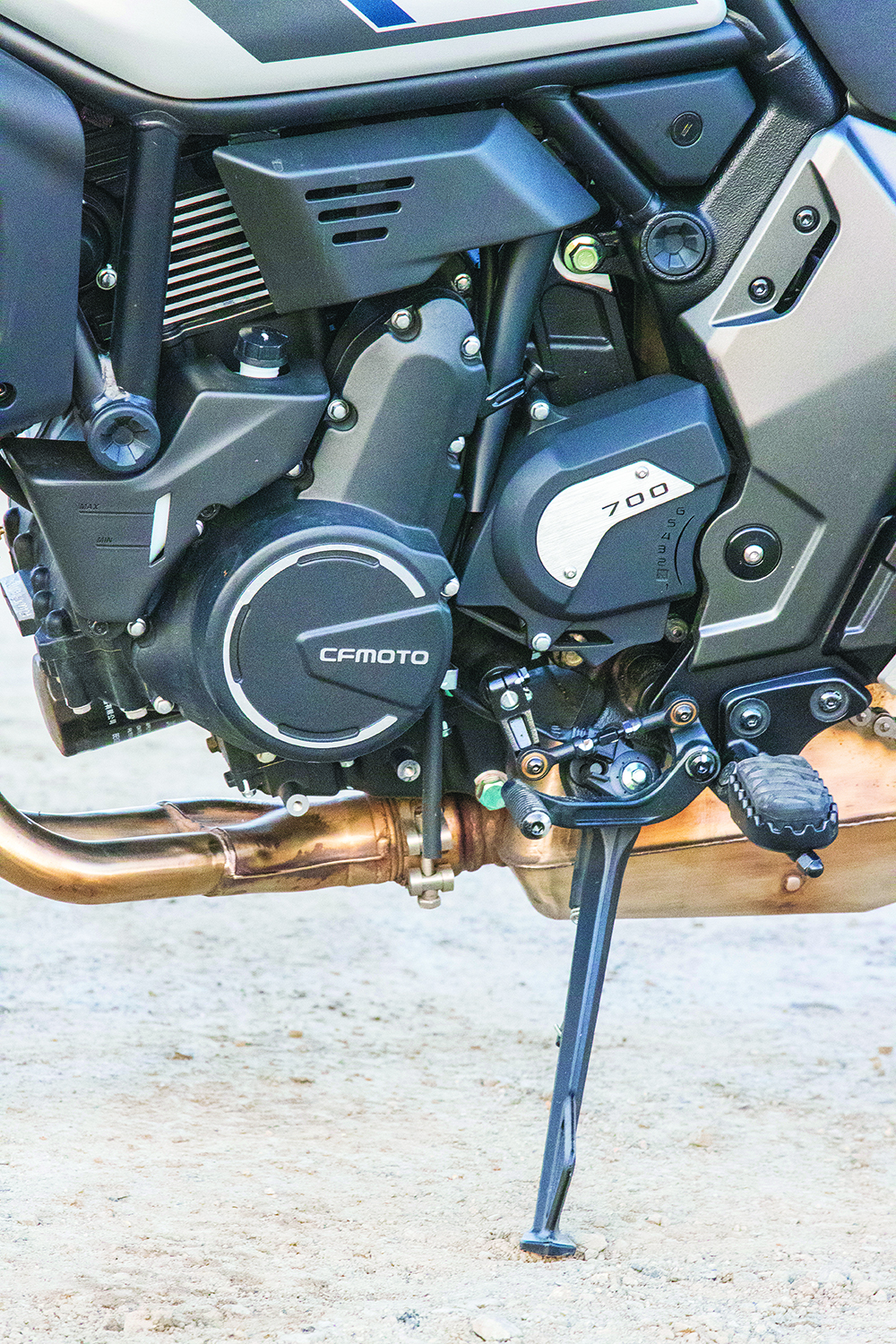 Pull in the light-action clutch, snick first gear and pull away, and it’s these first few rolling metres that can tell you a lot about a bike. In this case, it’s how well balanced the Heritage is, a feeling that was confirmed a minute or two later when that tight, feet-up U-turn happened like I’d known the bike for years.

It’s quite an engaging ride, you sit within the bike, rather than atop it, on a really accessible 800mm-high seat mounted towards a rear bias along the bike’s long-ish 1435mm wheelbase. You have a really clear sense of where you are on the bike and what it’s doing underneath you and that comes down to a cleverly designed tubular-steel chassis, weighing 16.5kg, matched to a lightweight aluminium alloy swingarm. 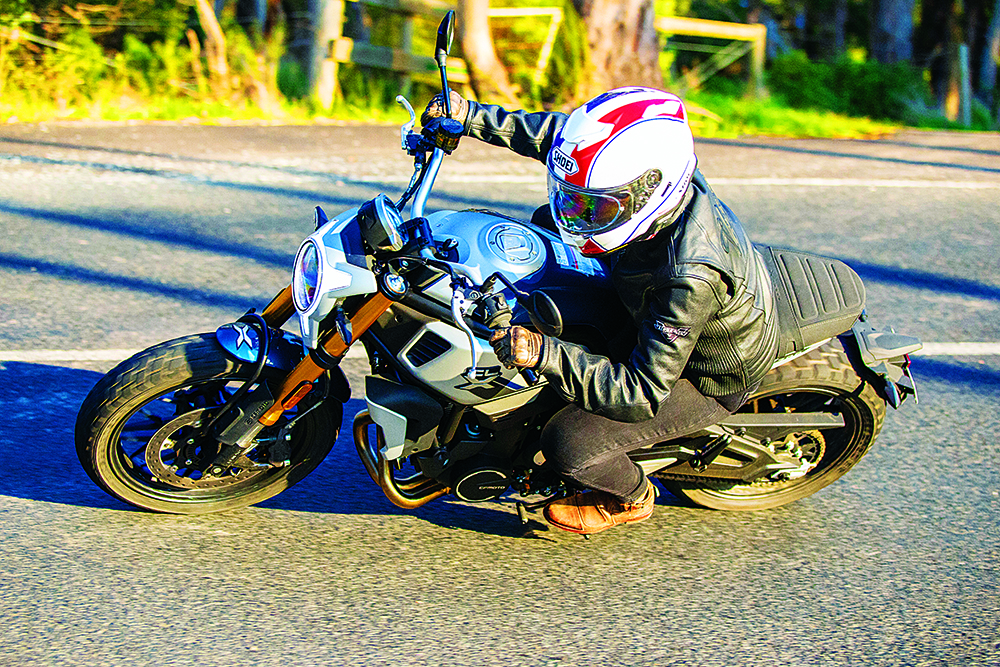 There’s a really comfortable reach to the wide, one-piece handlebar while your feet are naturally placed below your bum. It all adds up to ergonomics that are particularly comfortable for my 164cm frame and the well-padded seat becomes wider at the rear and offers really good support. Taller riders may feel slightly cramped, but there’s a couple of optional taller seats in the accessories catalogue (see sidebar) which raises the seat height by 25mm to appease those lanky types.

As well as balance, the thing that’s immediately noticeable is the ride quality afforded by the fully adjustable KYB 41mm upside-down fork – preload and compression is adjusted via the left fork leg, and preload and rebound via the right. At this price point, you wouldn’t bat an eyelid if a non-adjustable fork suspended the front-end, and it’s another feather in the new platform’s well-equipped cap. It means there’s far more feel than you’d expect from the block-pattern Pirelli front tyre encasing the 18-inch front wheel, too. 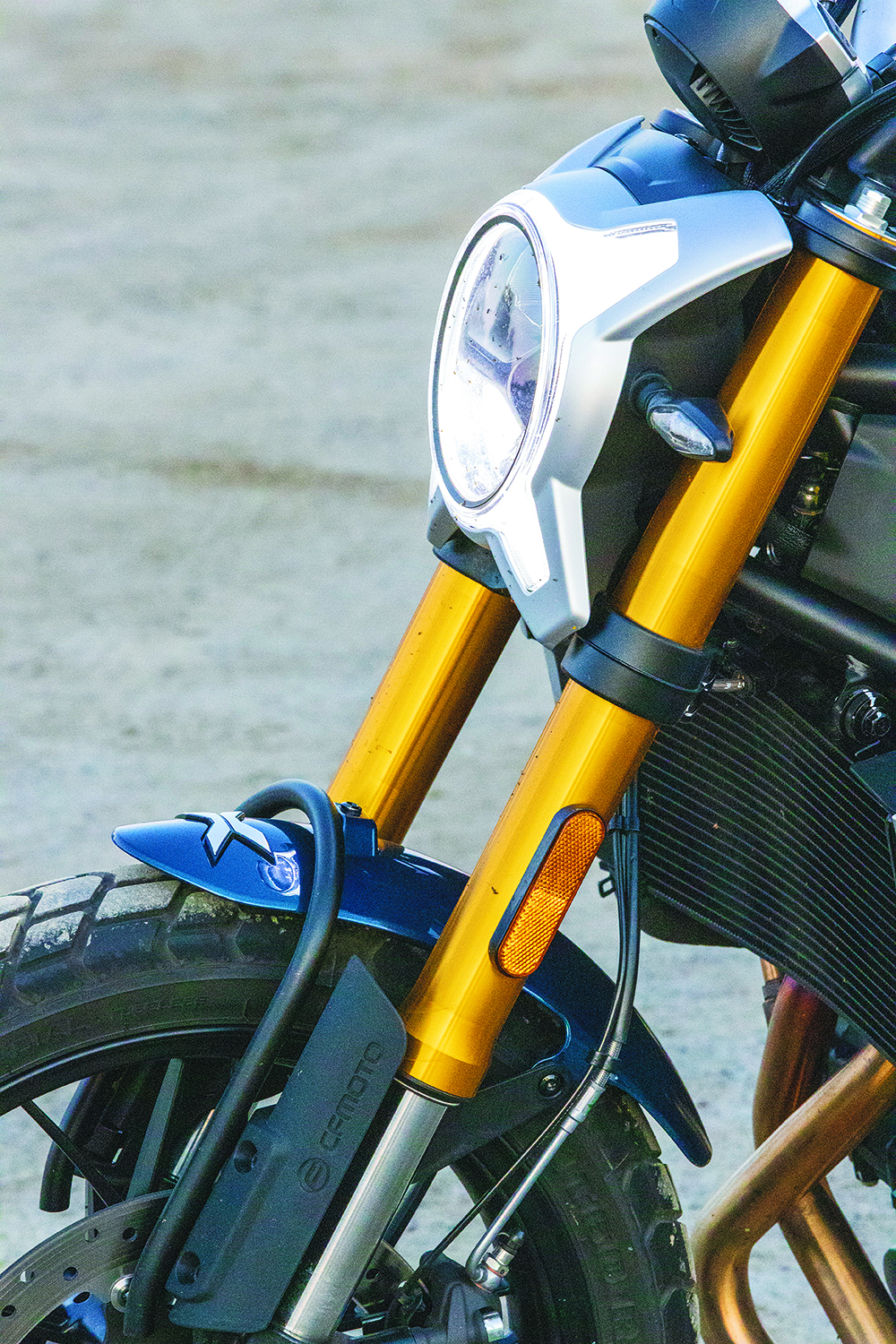 There’s plenty of confidence being fed to you through the big, wide ’bar which offers loads of leverage to hustle it through the tight stuff, which it’s pretty adept at doing. The front of the seat narrows where it meets the tank, which allows you to easily shift your weight from side to side when the pace quickens. And there’s heaps of feel and stopping power from the lone but beefy radial-mounted J.Juan four-piston front caliper grabbing hold of the 320mm disc.

That really capable fork is matched to a KYB monoshock which lets you adjust preload and compression, handy if you opt to make use of the well-padded pillion seat for either a human or some luggage. There are no grab handles to speak of, but the pillion ’pegs and their mounts would provide some usable tie-down points. 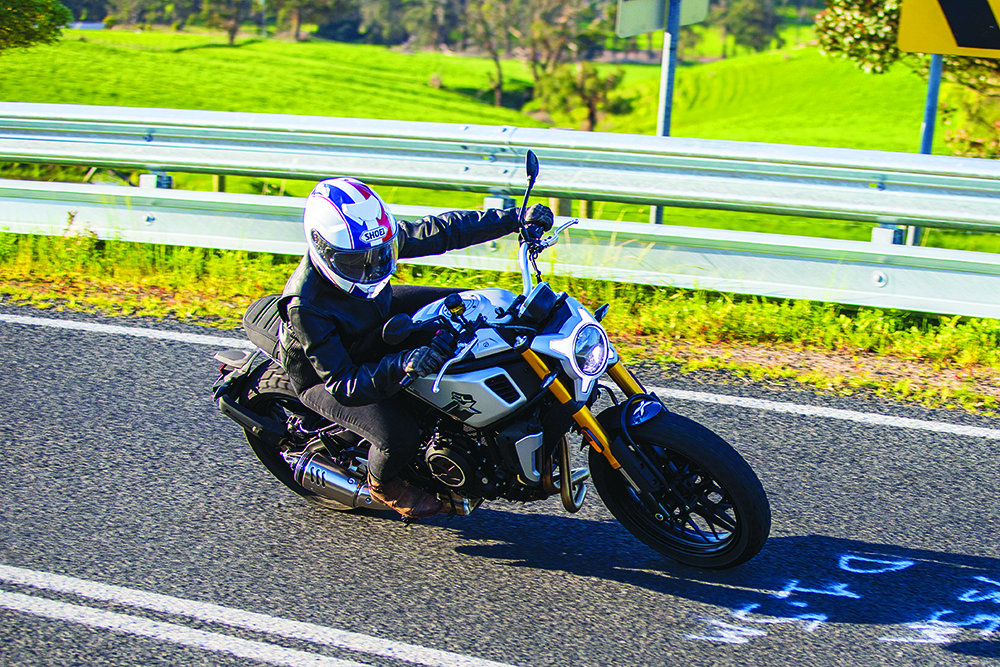 The rear brake offers heaps of feel and throws some decent power into the mix when used in combination with the front. Again, a J.Juan caliper, this time a twin-piston, but gripping a relatively large 260mm rear disc.

With 55kW (74hp) and 68Nm of torque, the 693cc parallel twin’s performance is predictably usable in the bottom-end of the rev range where acceleration is pretty sprightly. But the engine’s flexibility comes into play higher in the range where the peak power (8500rpm) and torque (6500rpm) both chime in – red line is indicated at 8000rpm. While it’s instinctive to short shift at around the 4-5000rpm mark, it’s actually pretty happy to rev and there’s plenty of performance to play with up in the red zone. Likewise, you can take off in third gear without any problem at all – it’s a hugely flexible engine and one that the brand is backing-up with a three-year warranty. 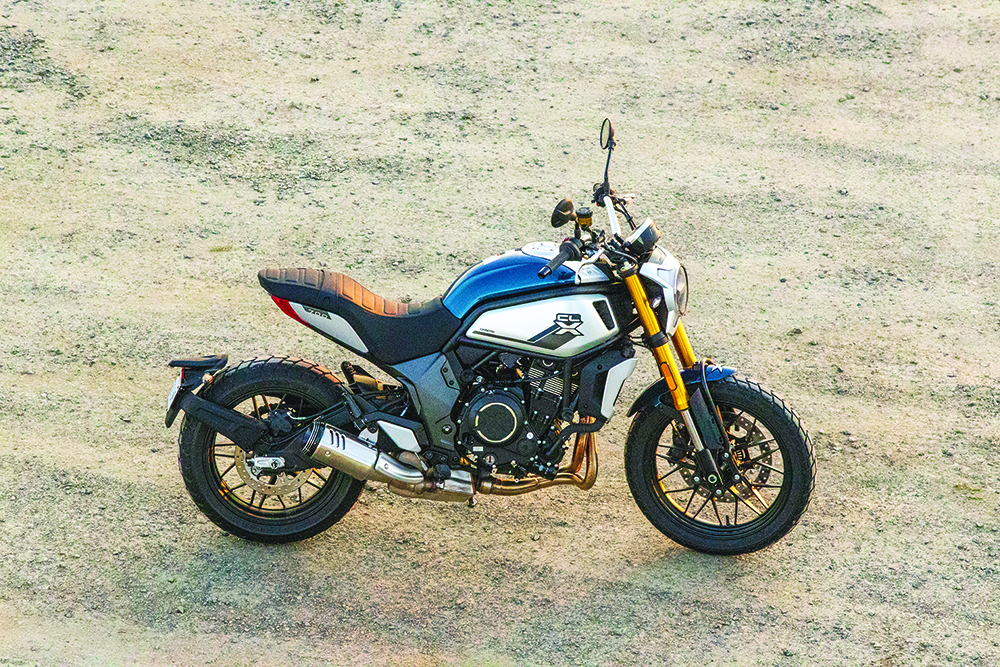 The digital throttle allows for two switchable maps, Sport and Eco, and, unlike the firm’s 300SR, makes a noticeable and considerable difference to throttle response. You can switch it on the fly without closing the throttle, too, where you can feel and hear the difference as soon as you hit the button located on the left side of the dash.

I spent the majority of my ride in Sport mode and while I didn’t encounter any rain during my test period, without any traction control to speak of, the softer Eco map would offer some peace of mind in wet and slippery conditions. 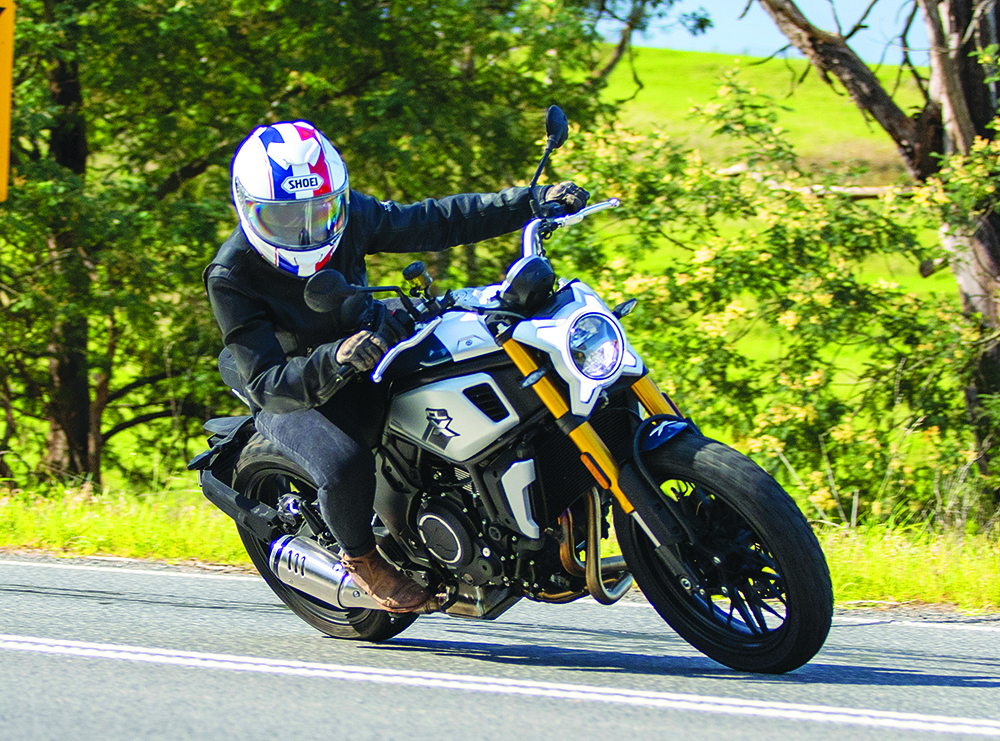 There is Continental ABS, however, though there’s no IMU – not that you’d expect one on a bike of this price point – so the system is not lean-angle sensitive. You probably wouldn’t expect cruise control, either, but it’s got it. And while the cruise control’s dash lights are slightly confusing – it stays green when you’ve deactivated it, the graphic only turns orange if you touch the brake or clutch lever, as opposed to other machines whose light turns green to indicate it’s on and orange to indicate it’s off, but ready for activation – and while it’s not as refined as systems found on bikes two and three times the Heritage’s price, it does exactly what it’s meant to do.

The headlight, the design of which mimics the X in the model name (as does the LED taillight, clutch cover and emblems on the tank and front guard), automatically switches between its daytime running light and headlight modes depending on the ambient light, which is a neat feature. And while some modern machines’ instruments will do the same, the CL-X’s dash offers five levels of brightness, albeit via manual adjustment. 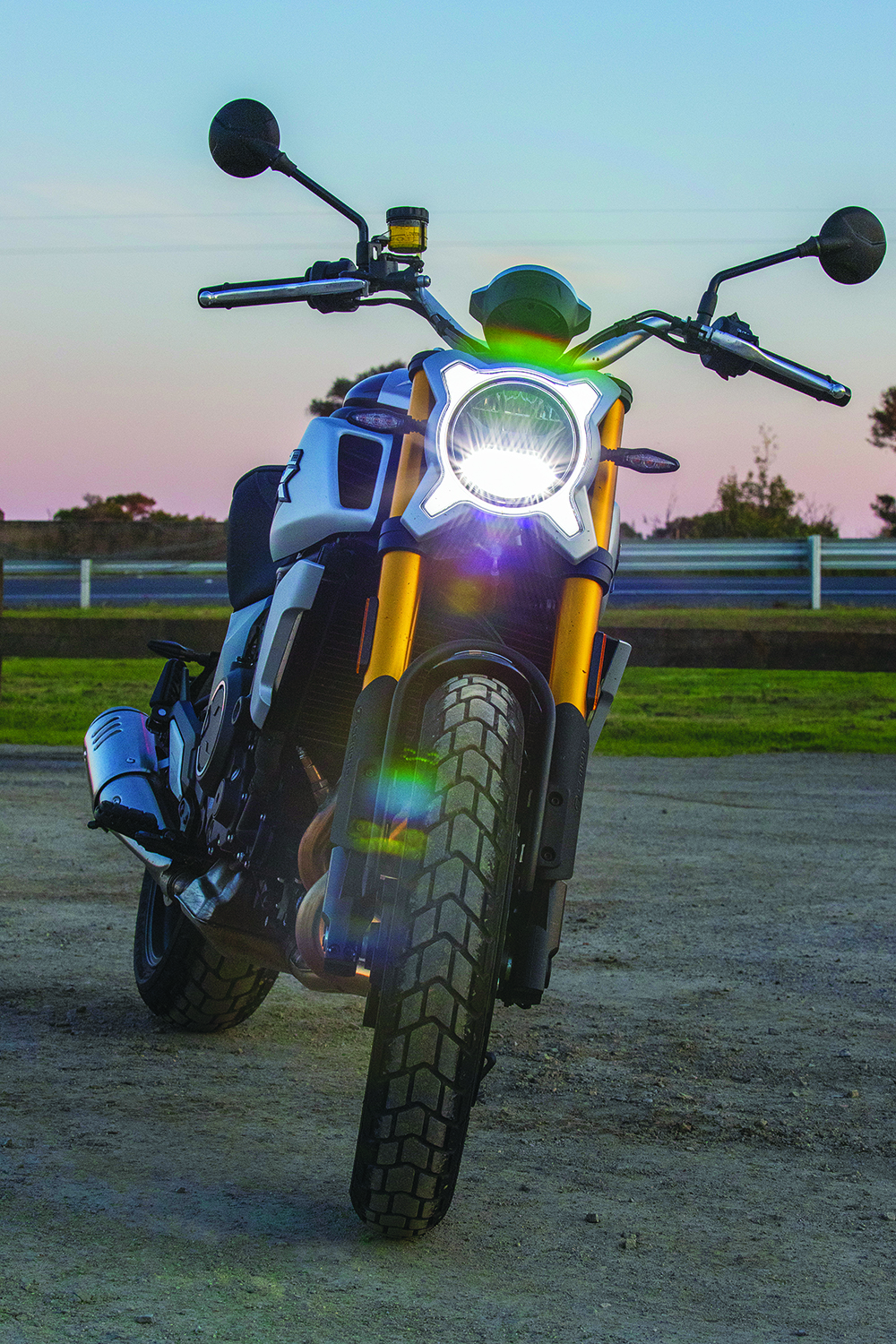 The LED indicators are self cancelling, however, the off switch is tripped when you initially lean into the corner, rather than when you’re coming out of it. This is okay for normal corners, but if you’re chucking a U-ey at a roundabout, for example, the car at the third exit will probably think you’re going straight ahead and pull out in front of you. So you need to reapply the indicator to avoid a potentially dangerous situation.

Low beam throws a nice, wide pool of light across both lanes of a standard road and while I didn’t notice a significant improvement switching to high beam, a couple of oncoming cars flashed me while on low beam, indicating it’s plenty bright enough. 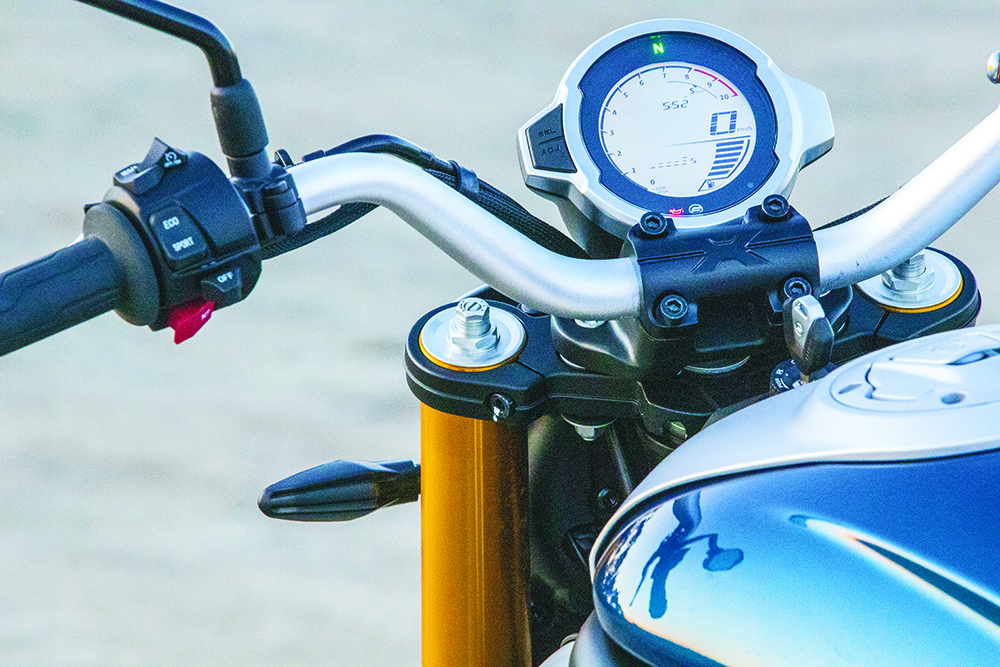 Despite visually forming a large proportion of the CL-X Heritage’s styling, the tank is a small 13-litre affair, which has you looking for fuel well before you’re ready to stretch your legs. I’d travelled 180-odd kays when I hit the final bar of the fuel gauge which started flashing just 20 or so kays later, making me particularly nervous and desperate to find a service station. 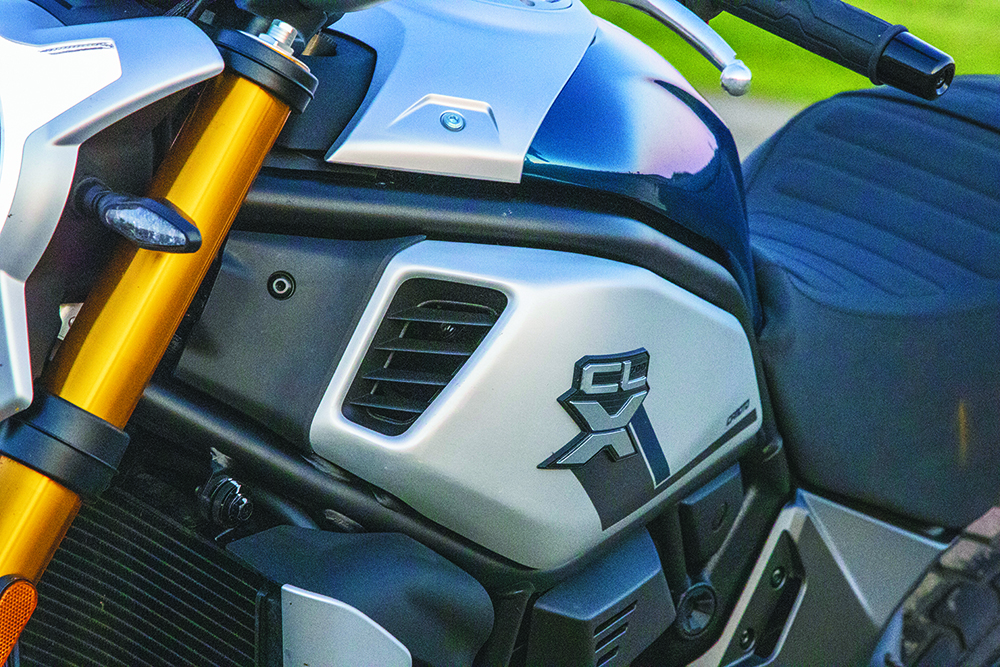 Though when I did, and fuelled up, I could only get just under nine litres into the tank, meaning theoretically I had another 80 or so kays left before things got really dire. It also means I returned a very respectable consumption figure of 4.54L/100km, which was reflected on the average consumption readout on the dash, too.

But if I did run out of fuel, the 700CL-X Heritage has hazard lights to draw attention to it if it left me stranded in an awkward spot. And I could charge my phone while I waited for help to arrive, via the USB port located under the seat. 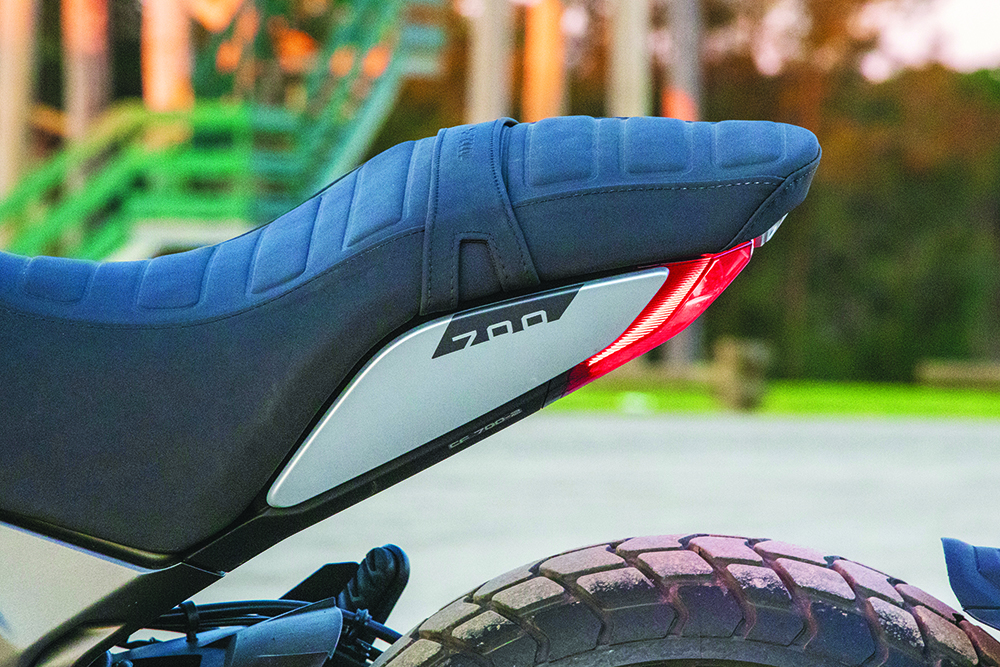 Again, small but really relevant details that add up to a well-equipped motorcycle that is very well priced in a crowded midsized marketplace. As CFMoto’s first foray into the non-LAMS segment, this first of three 700CL-X machines is very impressive. Of course the partnership between CFMoto and KTM is behind the implementation of such a high-quality product, and it bodes very well for the incoming 800MT Adventure platform, too.

When you consider the 693cc Heritage produces more power and torque than Ducati’s 803cc Scrambler Icon with which it shares many specs and features, and that the CFMoto is more than $6000 cheaper than the Ducati – and comes with a 12-month longer warranty period – it puts forward a pretty strong argument. 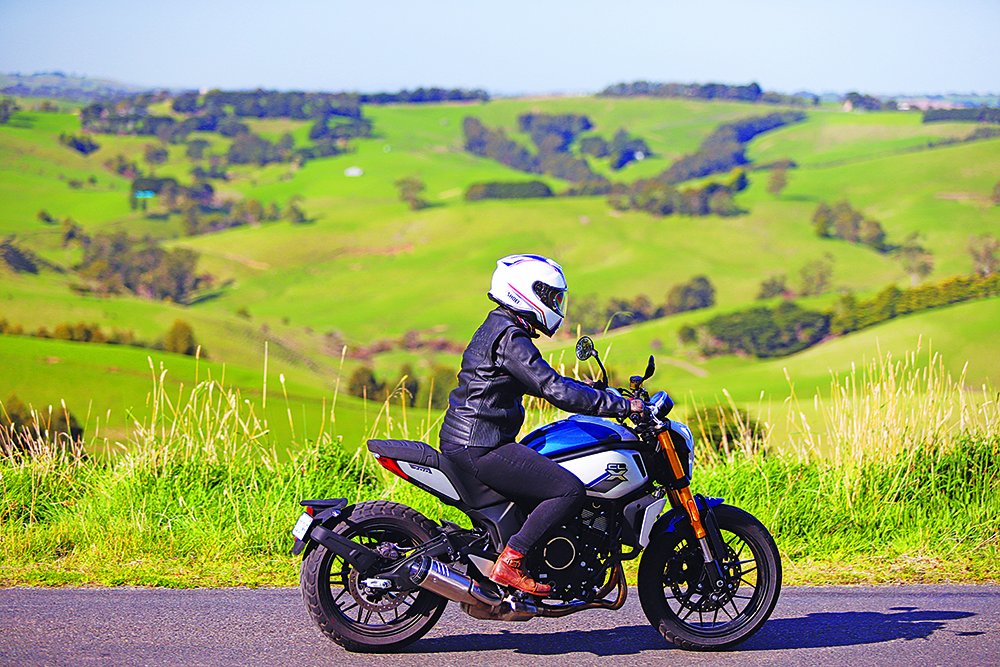 By the time its two stablemates join it on showroom floors and the 800MT barges, it’s way into the equally crowded Adventure bike segment, something tells me the brand might take on a very different meaning in the minds of Aussie riders. 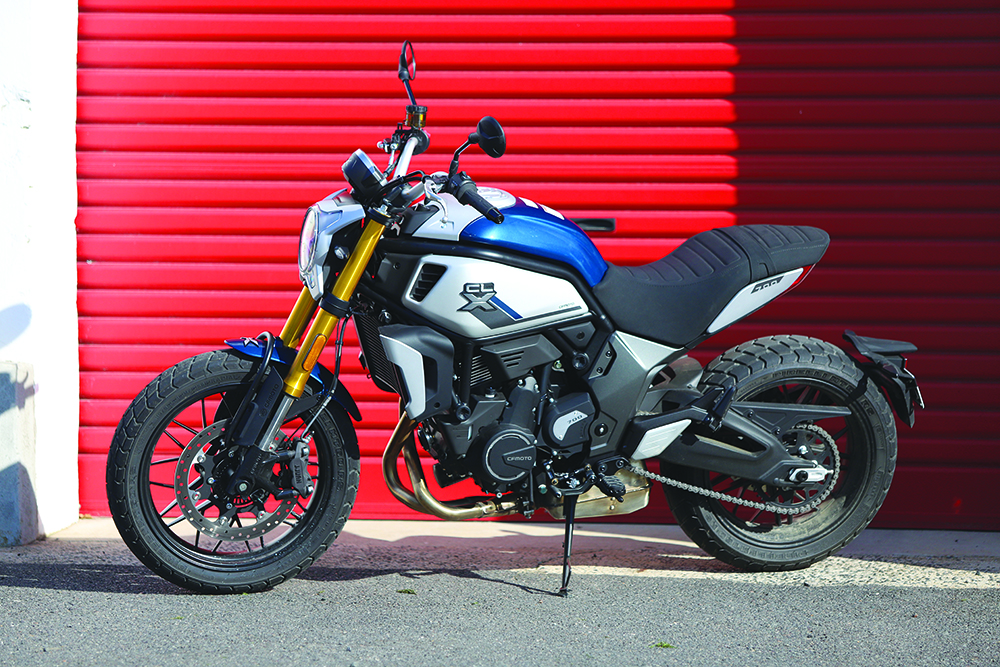