You don’t need an adventure bike to have fun and memorable adventures, all you need is clever practicality. And the Tuono 660 has that in spades

These days, most people do it on something slightly more appropriate. An adventure-style bike with a luggage rack, a long, wide seat and a bevy of tie-down points. But it wasn’t all that long ago that that luxury didn’t really exist. Adventure bikes for many were the bikes we owned – sportsbikes, tourers, cruisers and nakedbikes – we’d pile them up and head off down a muddy dirt road with mates and the memories and adventures were priceless. 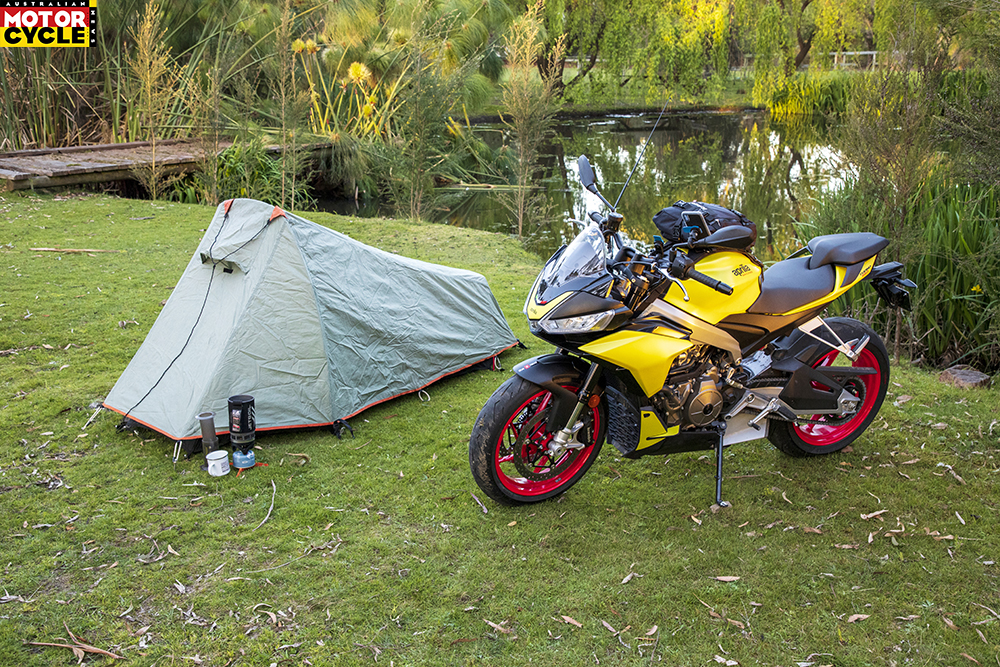 If a good proportion of your riding involves getting to faraway places via roads less travelled, then an adventure-style bike is definitely for you. But you absolutely don’t need an adventure bike to have memorable adventures and the Tuono 660 – and plenty of other non-adventure-identifying machines on the market – is the perfect illustration why.

Because while the only thing to tie to are the brackets for the pillion ’pegs which are mounted too far forward to convincingly secure gear using them alone, the Tuono boasts plenty of other practicalities that make it thoroughly capable in far more environments than twisty urban fringes. 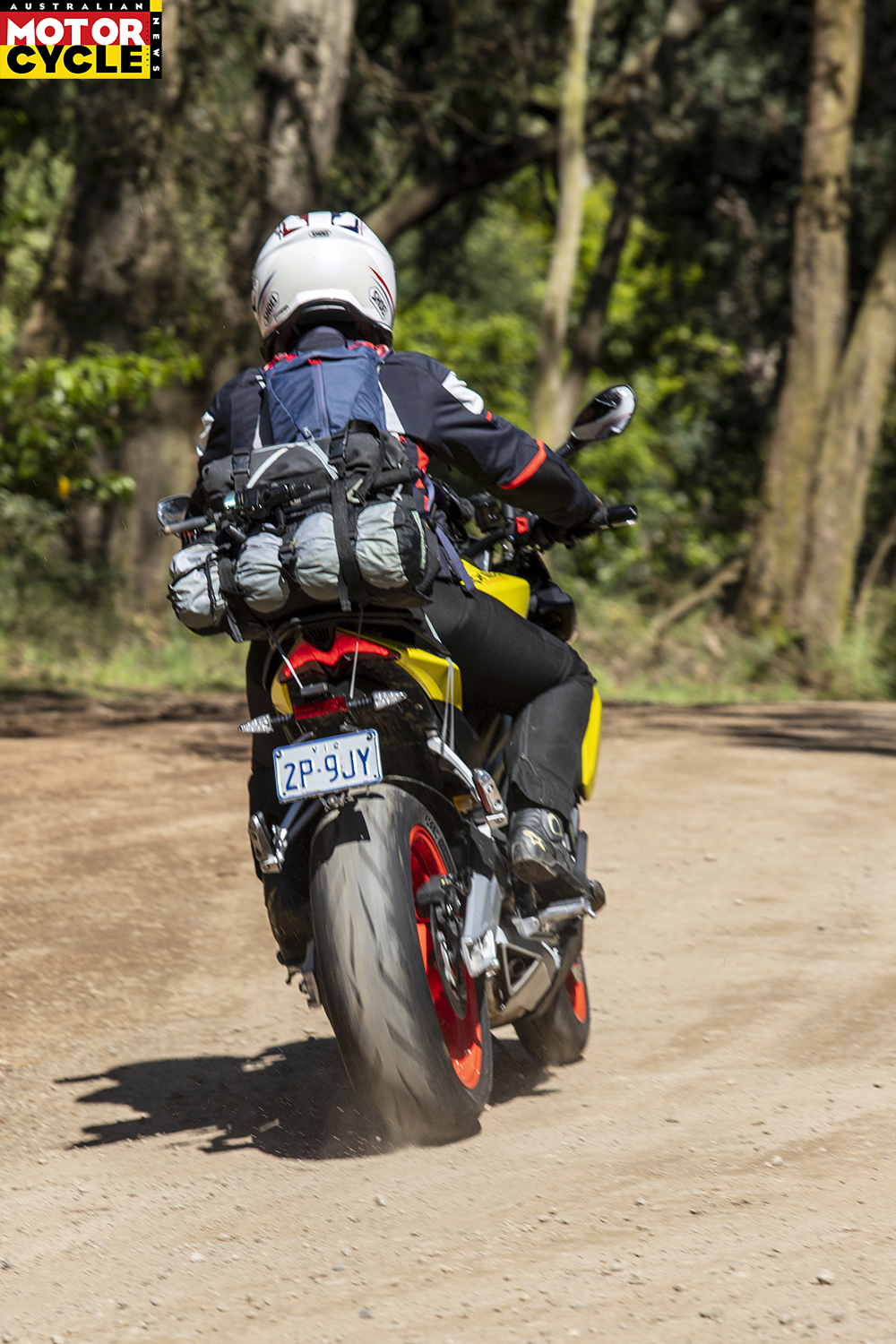 The 17-inch cast wheels aside, most of the things that make the Tuono 660 such a great roadbike actually translate to making it a pretty versatile machine in all sorts of conditions.

Starting with its physical size, it’s lightweight and compact, which makes it a heap of fun in the twisties. Especially since its 659cc engine is mounted in one of the most well-balanced chassis in the mid-capacity segment. Add to this a really torquey and engaging engine and a wide, once-piece handlebar and hustling the thing from one end of a twisty section of road to the other is as fun as it is precise. 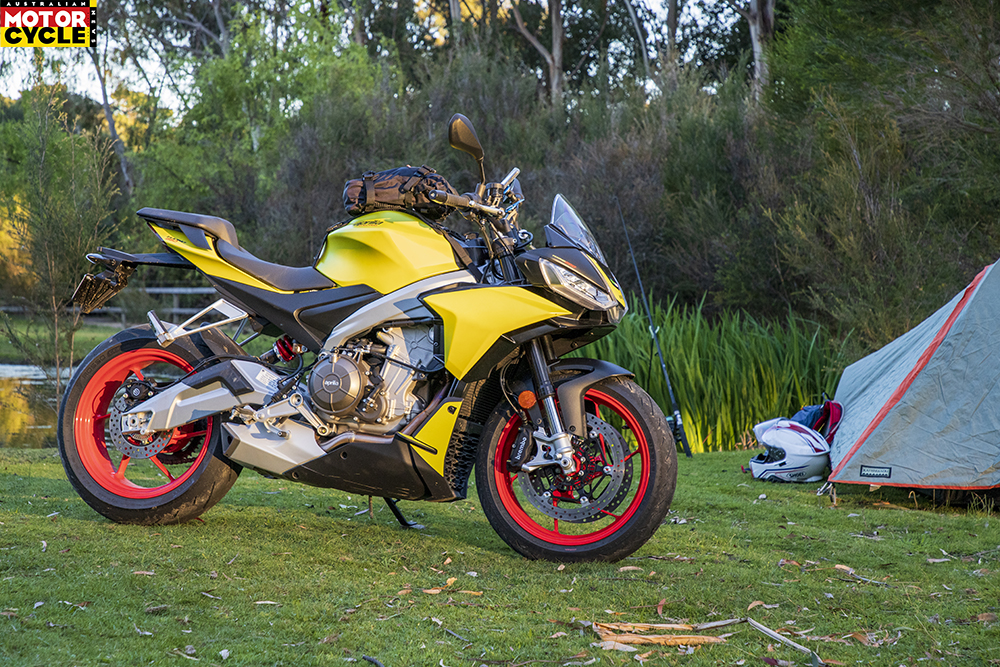 And it’s those qualities which make threading between tree roots and deep puddles really easy because the bike is so well balanced. Even with gear piled up behind me, that tricky low-speed slippery stuff didn’t so much as raise my heart rate. It’s helped by a really spacious riding position; compared to the RS660 sportsbike, the ’bar is mounted in 50mm risers and the ’pegs sit quite a bit lower, though not to the point where they’ll ground out on your favourite road.

The RS is equipped with the same high-tech suite of electronics as the firm’s flagship RSV4 superbike, complete with a six-axis IMU so the whole shebang is lean-angle sensitive, it means that you can trim the bike’s performance and electronic intervention to suit the conditions you’re riding in. 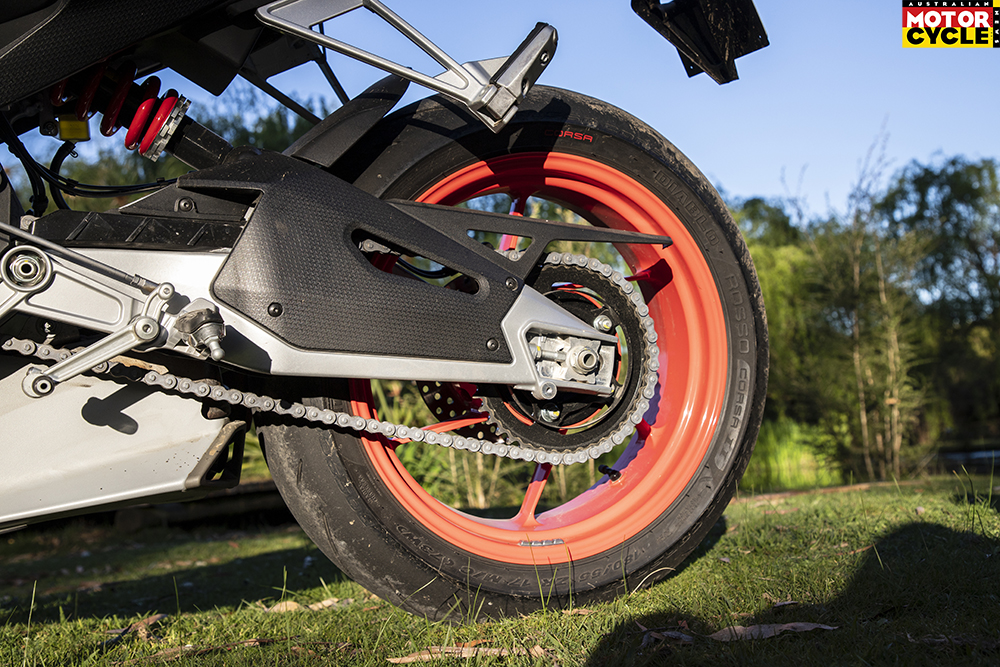 And while the IMU (and, annoyingly, the two-way quickshifter) is an optional accessory on the naked Tuono version, there’s still a swathe of configurable rider aids ready to help you along whatever road – or racetrack – you choose to point it down. 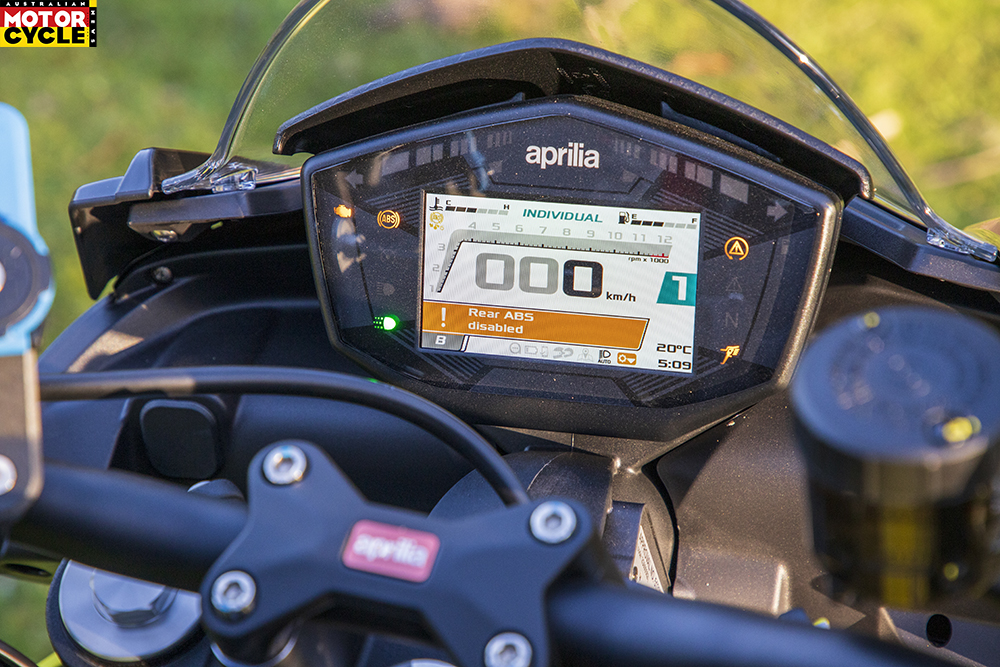 Of the five riding modes – three road modes (Dynamic, Commute and Individual) and two dedicated to the track (Challenge and Time Attack) – I’d immediately soften the throttle response when I hit gravel roads by thumbing a button on the right-hand switchblock just once on the fly. Still with the same amount of power on offer, as well as softening the throttle response, it offers maximum engine braking and ABS intervention while turning the traction control to level six (out of eight levels) of intrusion. Of course if things get particularly gnarly, you can flick over to Individual mode where you can customise things even further, like switching off the rear ABS altogether. 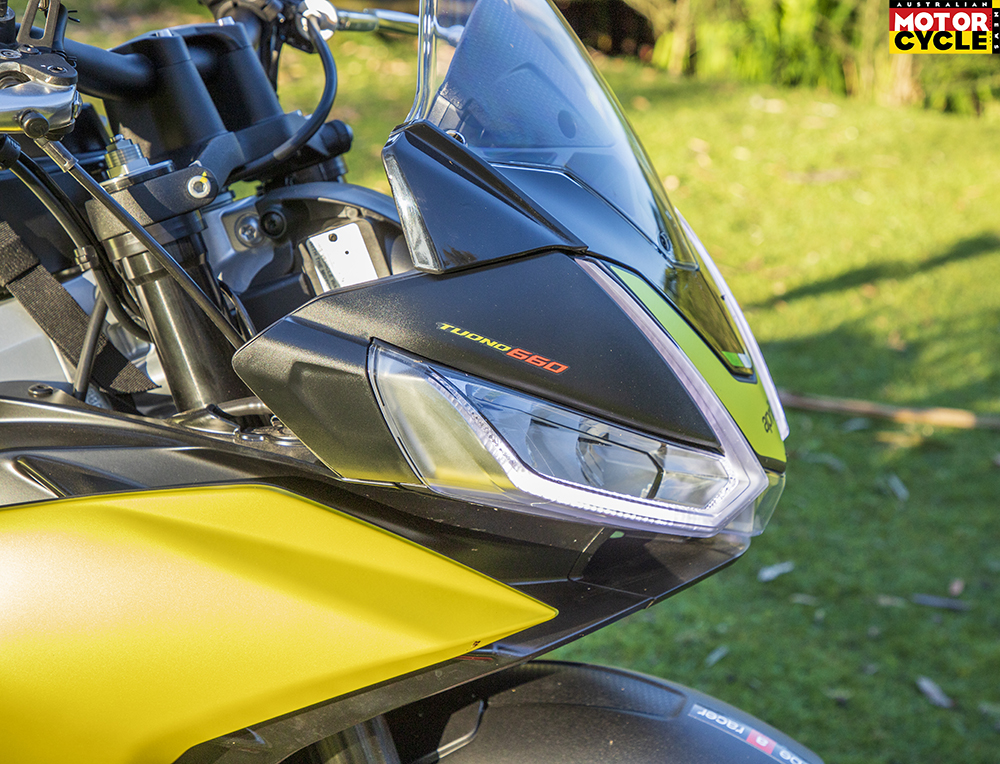 The 4.3-inch TFT dash is clear and colourful, not only is it really easy to navigate around – and there’s plenty to navigate – but it adjusts to the ambient light as day turns to night or vice versa. The level of gadgetry means the Tuono outclasses anything else in the midsized nakedbike sector (see sidebar) and the other thing I found surprisingly useful was the perfectly dialled in two-way quickshifter complete with auto-blipper. In sketchy conditions, it means weight transfer front to back between gearshifts is kept to a minimum and revs can remain constant, two small but important things when sticky road tyres meet slippery mud. 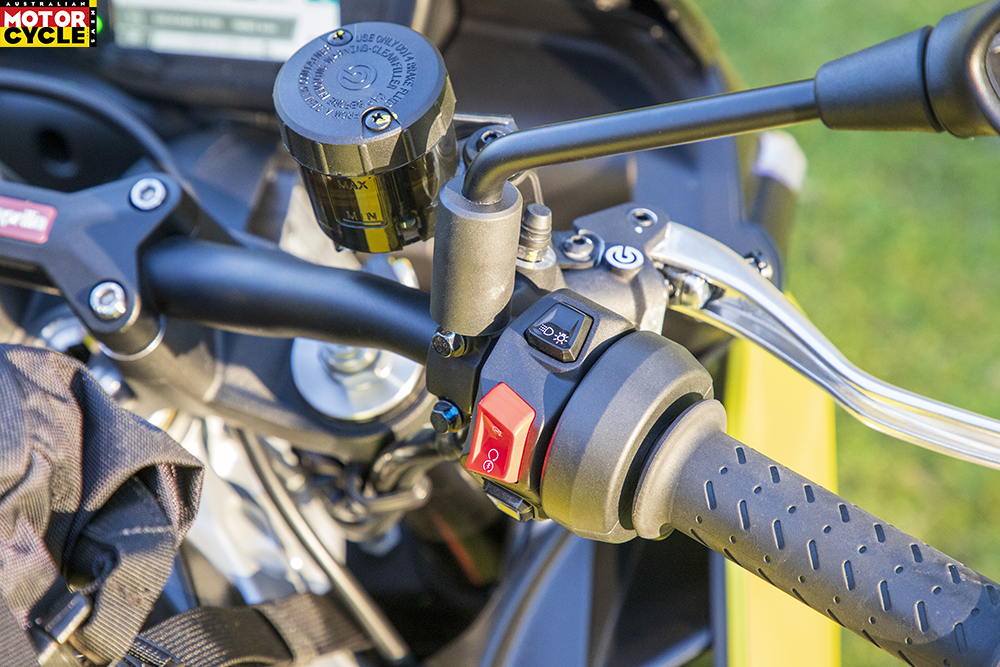 But if you need to use the clutch when things get particularly steep or slow, it’s a nice light lever action and predictable in its actuation. The 820mm seat height adds to the Tuono’s agreeable ways and it narrows at the front which means it’s easy to paddle around your campsite with little chance of you entertaining the people with their 21-inch front wheels who arrived earlier than you.

The 64-degree turning circle is handy whether you’re threading the bike between guy ropes or stationary traffic, the underbelly twin-exhaust keeping the weight nice and low, and that spacious riding position means you can have a fully loaded tank bag fitted and not be hindered by it at slow speeds. Or quick speeds, for that matter. 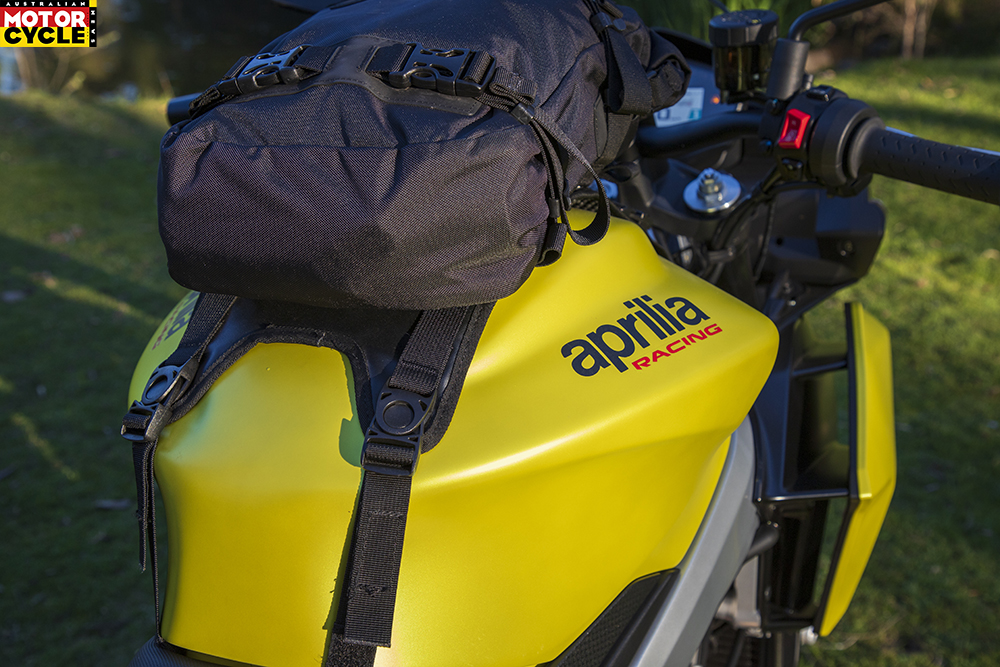 And for those times you do want to up the pace, the Tuono will happily oblige. There’s heaps of feel down to the front contact patch, despite those high ’bar mounts, and the grip afforded by the Pirelli Diablo Rosso Corsa II tyres is excellent. Helped no doubt by the 41mm KYB USD fork, which is adjustable for both rebound and preload but whose standard settings felt great either fast and at full lean or picking my way along a dodgy back road. The rear shock, for my size and weight, likewise, even with a tent, bed roll, sleeping bag, stove, coffee maker, towel, water, food, booze and fishing gear for company.

The brakes are everything you’d expect from a bike with superbike pedigree. The radial-mounted Brembos offer all the power and feel you need from a 183kg ready-to-ride bike and the braided steel hoses will ensure fade wouldn’t be an issue if you unloaded the camping gear and headed out on track – which I suspect plenty of owners will actually do. At a tight circuit and in the right hands, the midsized Tuono would happily round up the odd 1000cc superbike, no question. 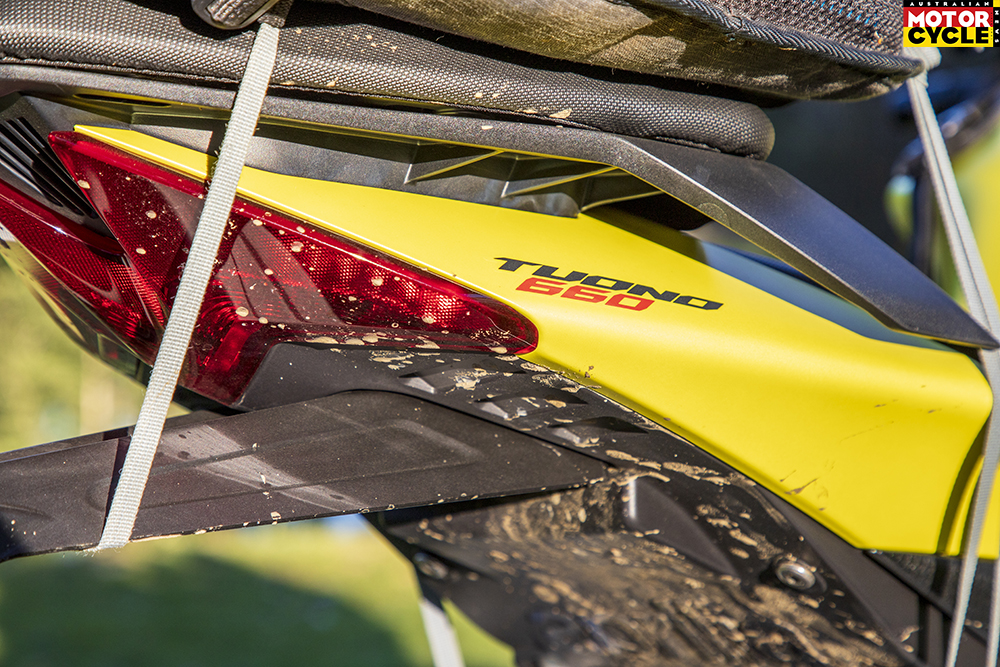 The fuelling is spot-on, as we’ve come to expect from everything out of the Noale factory, and feeding the 659cc parallel-twin naked revs on a twisty stretch of road is heaps of fun because it’s strong yet predictable. The engine is the jewel in the Tuono’s crown; the way the 70kW of power and 67Nm is delivered is enormously engaging – and sounds great out of that twin-exit exhaust – but not to the point where you’re going to find yourself out of your depth. The 660 parallel-twin engine is a practical balance between performance and usability. 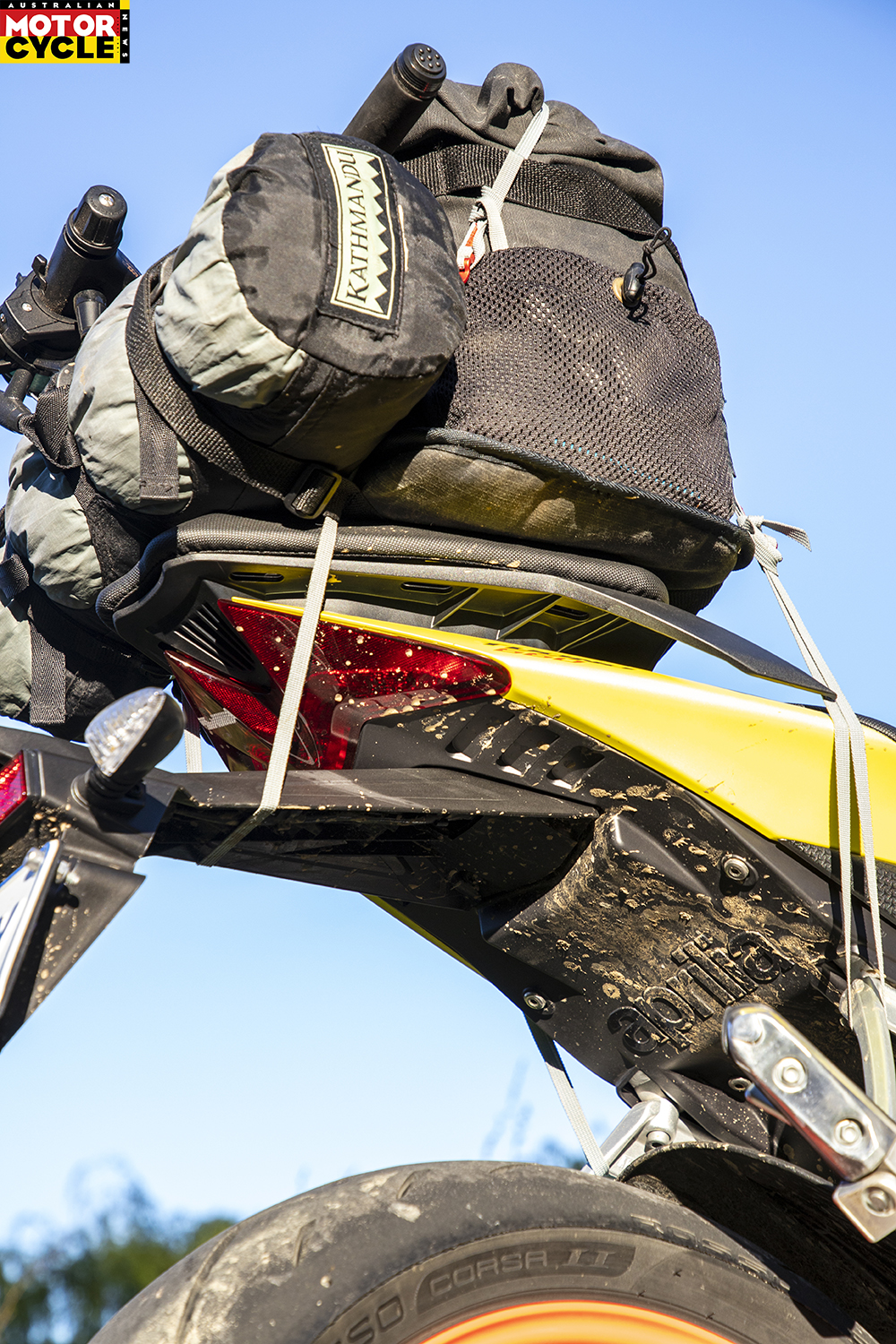 But, given the RS660 sportsbike comes with the quickshifter and IMU as standard fitment, facilitating not just the cornering ABS and traction control systems but also cornering lights, and it runs a lightweight lithium battery versus the Tuono’s lead affair, I’d expect the Tuono to be quite a bit cheaper.

Because if you want to option your new Tuono up to the same level of spec as the RS660 – and who wouldn’t? – you’re looking at another $1100 for the IMU, another $590 for the quickshifter, plus whatever your dealer is going to charge you to fit them. All of a sudden your midsized nakedbike is costing you well over $22k. And you’re only saving $400 if you’ve opted for the restricted learner-approved version. 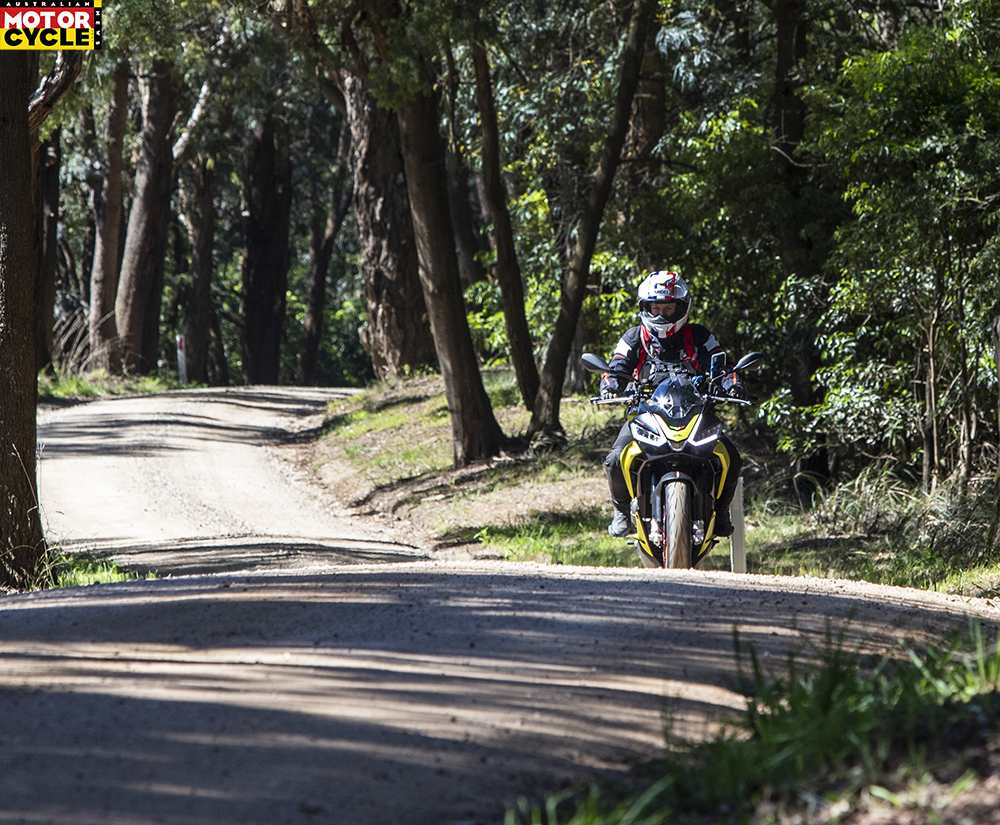 Hopefully, Aprilia can address this soon because while the new Tuono 660 is a really great machine, there are lots of brands making really great bikes these days. I can ride away on a BMW S 1000 R for $22,691, for example, or a CFMoto 700CL-X Heritage for $9490 on the road.

But price aside, there’s no doubt the Tuono is a far more versatile version of the RS660 sportsbike I tested earlier this year (AMCN Vol 70 No 22). It boasts premium European build quality and has the smarts to take you to more places than you may otherwise have thought about. 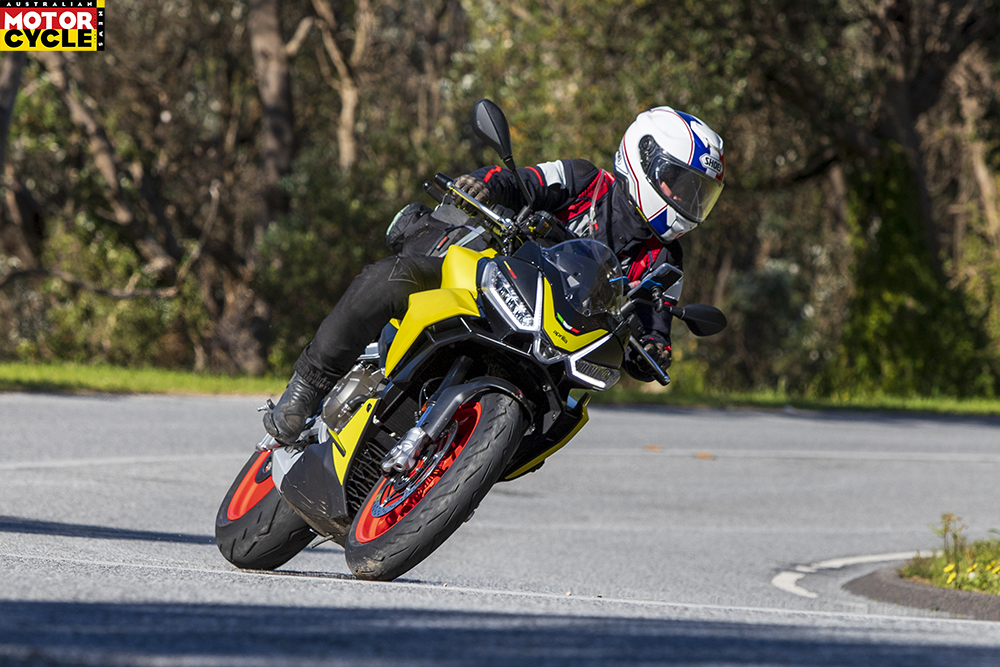 So you might not be lofting the front wheel over logs as you lob into your campsite, or spraying dirt at your mate behind as you drift out of corners on the way back out. But the Tuono will get you down that snotty road to that oh-so-fun rally site and its electrickery will get you back to the black top in one piece the following morning with even the wildest of hangovers.

And while all your mates will be loping home on their large-diameter knobby-shod front wheels, you can get your head down and have just as much fun blasting home through the twisties as you did the night before. Just don’t tell them what it cost. 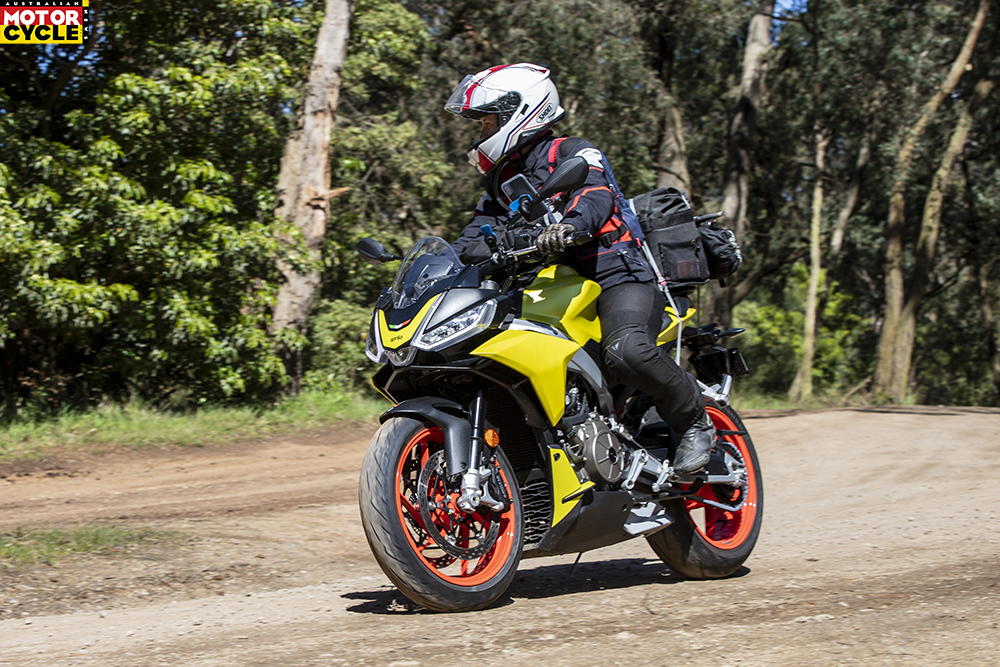