For many of us, our introduction to Triumph’s Speed Twin was when it lobbed into dealerships at the start of 2019. But if you like flat caps adorned with Triumph badges you may well associate the Speed Twin moniker with the late 1930s when Londoner Edward Turner developed the first parallel twins. That bike and engine platform were in many ways the start of Triumph’s success.

Now, nine decades later, Triumph is again pushing the performance of the Speed Twin. Okay, not as dramatically as Turner’s ground-breaking work – and it’s fair to say the factory’s hand was forced to make sure the Speed Twin conformed to Euro 5 regulations – yet still, the firm’s objective was to increase the performance of both engine and the chassis.

Power is up a handful of kilowatts, the torque is delivered slightly lower in the rev range, new M50 Brembo calipers are added along with grippy, track-ready Metzeler Racetec RR rubber. There is also a new Marzocchi fork and a revised chassis, meaning this isn’t just a superficial tweak. There is even a completely new twin exhaust that neatly hides the catalytic convertor under the bike, giving the illusion the exhaust is a straight-through ear-splitter.

The Speed Twin is essentially a comfortable Thruxton, a bike everyone loves even if it is a tad expensive and hard on body parts – especially for the mature market which was and still is attracted to the retro racer. When Triumph launched the Speed Twin in 2019, it was essentially an easier to live with, toned-down version of the Thruxton. AMCN’s former editor Sam Maclachlan loved it (AMCN Vol 68 No 21) as do, I’m sure, the 11,000 souls who have since bought one worldwide. 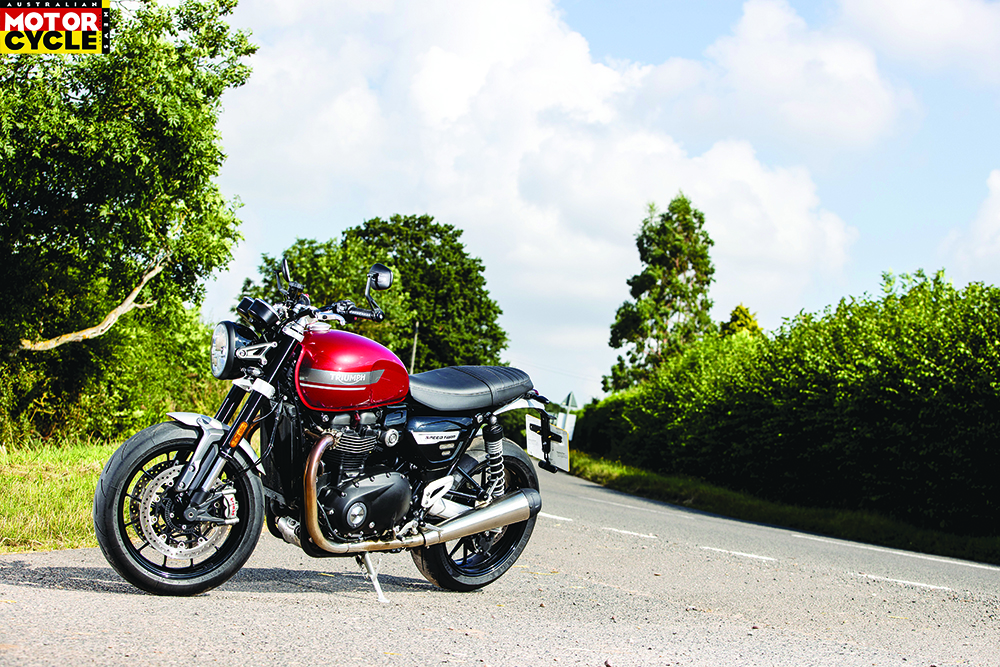 Triumph is smashing the retro scene at the moment with its new Bonnevilles, updated Scramblers and now the upgraded Speed Twin, but its designers are up against it. It’s a tough job as they face ever tighter emissions standards, meaning they need to hide ugly cat-converters, disguise the modern fuel injection and distract your eyes from the side reflectors that must be fitted to every new bike. But despite these constraints, they’ve done an excellent job. We have on test the so-called Red Hopper, which is 300 bucks more than the standard Black, but I really like it. It’s retro. And even if you removed the badges, it would still obviously be a Triumph, only now with a neat modern twist.

There’s a more aggressive stance for 2021, with 12-spoke cast-alloy wheels instead of the old seven-spoke items. The new exhaust neatly hides the ugly cat, and my eyes are drawn to the huge M50 Brembo calipers and new upside down Marzocchi 43mm fork. And from a few feet away the retro effect is so convincing, you wouldn’t know this was a fuel injected, Euro 5 compliant motorcycle. 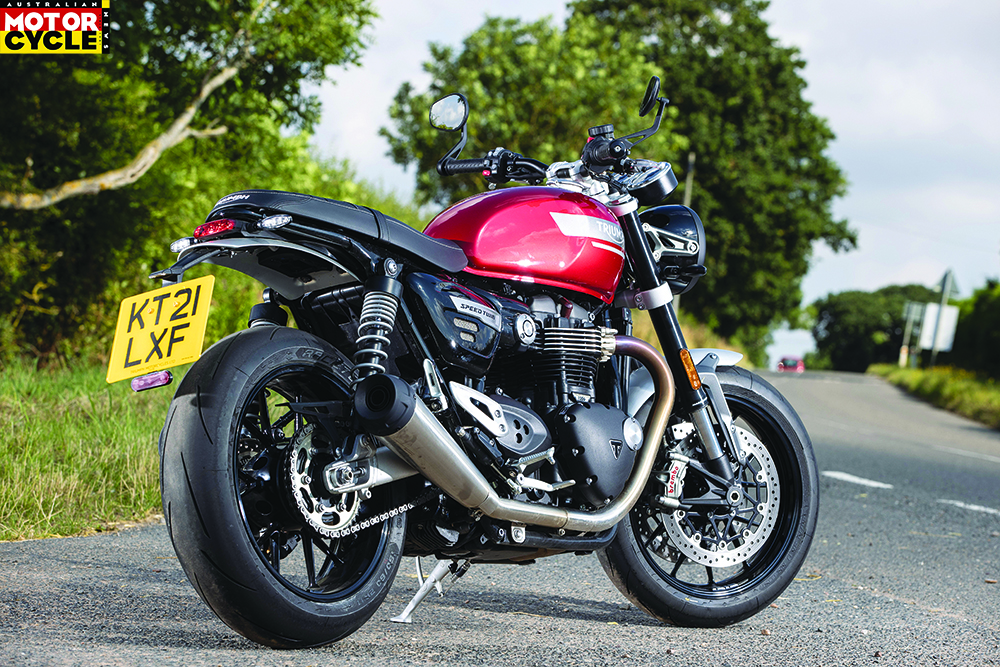 There are over 50 accessories for the Speed Twin (no aftermarket exhaust, though), but I don’t think it needs anything more. At $20,690 (ride away), the price has risen a fraction over the old model, but it’s still not a bank breaker and should leave enough change for some genuine luggage or, maybe, heated grips for winter. There’s no cruise control or quickshifter, which is expected kit these days, but the styling and build quality have all the boxes ticked. 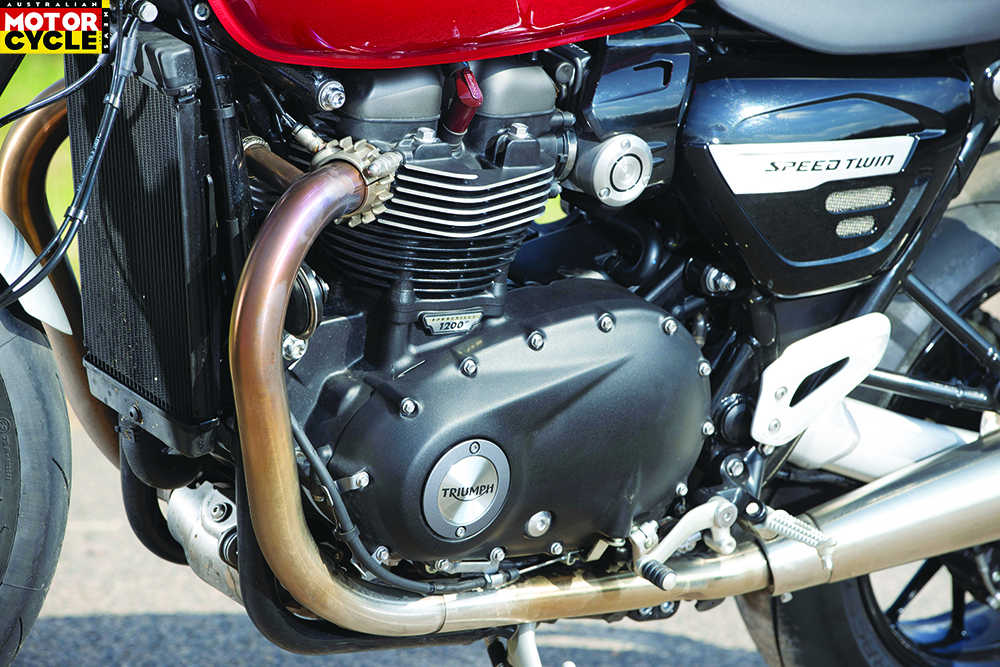 According to Triumph, this results in a wider spread of useable engine performance and comes via that new exhaust, revised fuelling, higher compression pistons, a 17 percent reduction in crankshaft inertia, updated cam profiles and revised ports.

Controlling the power are three rider modes – Rain, Road and Sport – all of which give full power but use individualised mapping. As you’d expect, traction control and ABS come as standard, but they are not linked to an IMU and therefore not sensitive to lean angle. But don’t worry, the TC can be deactivated should you want to lift the front wheel off the ground – something the Speed Twin does very easily in the first few gears. 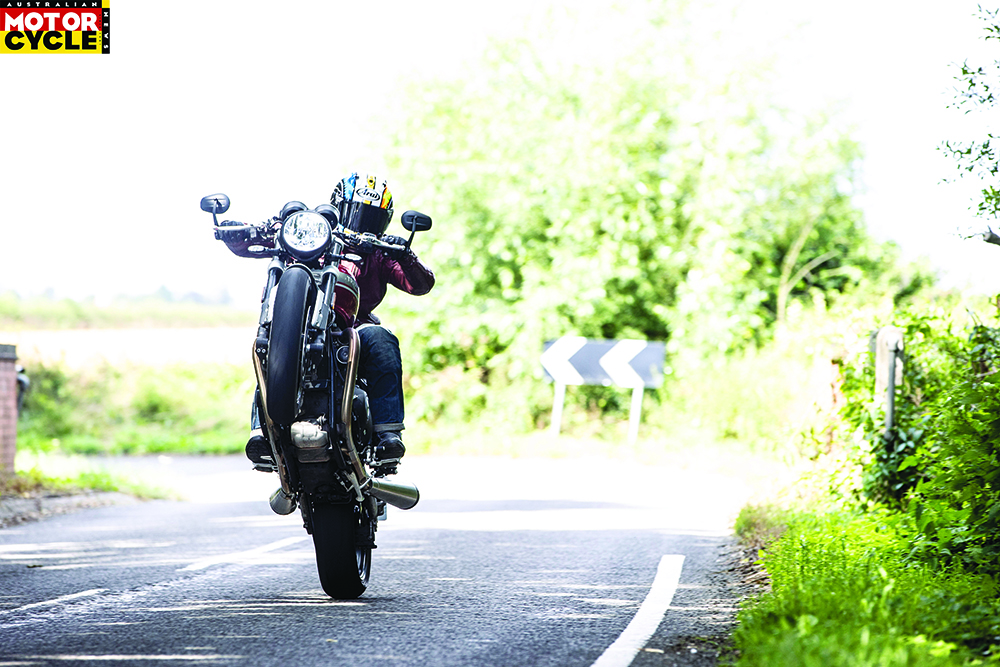 At first, the relatively basic 1200cc parallel twin takes you a little by surprise. One hundred horses might be almost laughable to a Panigale owner, but don’t let the retro styling fool you – it’s surprisingly quick.

The gear changes are long and relatively slow, but you don’t need to be dancing on the (unchanged) gearbox. From 3500rpm there’s a pleasing spread of grunt, plus a sense of urgency about the Speed Twin. As mentioned, I was pleasantly surprised, much like I would be buying a round of drinks and getting change back, when wondering whether I’d have enough. Rapid overtakes require a dab on the gear lever, but even if you’re low in the rev range it will pull cleanly with a smooth spread of torque. 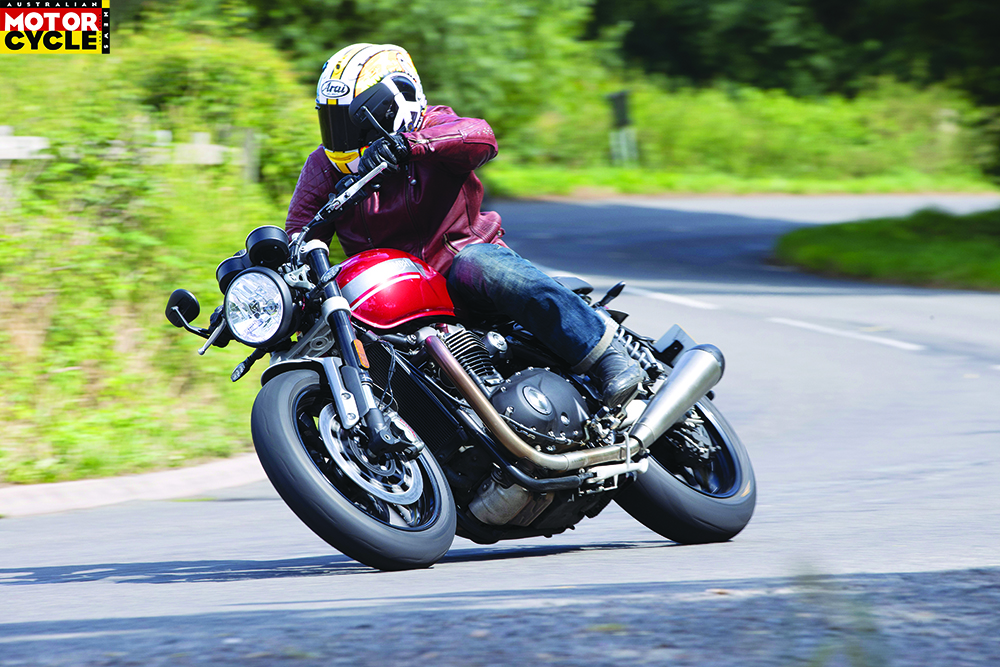 There’s a useful bit of over-rev to play with should you decide to make full use of the motor, the limiting factor will be your arm strength and not the parallel twin which, more than ever, is happy to be revved. There’s more power than a T120 Bonnie, and only a fraction less than the sporty Thruxton – so don’t underestimate an ‘old looking’ Speed Twin – it could embarrass a few bikes away from the lights. Power hasn’t, on paper, increased massively, but it feels livelier and more exciting to ride – and that is what matters, isn’t it?

You could argue that a lighter engine that is more willing to rev makes it more intimidating for new riders. But in Triumph’s defence, it’s still a 1200cc lump, and there are those rider modes to soften the fuelling further. At low speeds, I was impressed with the Speed Twin’s accurate fuelling, a light clutch and a low seat height. I’d like to ride the 2021 model back-to-back with the previous model to give a categorical verdict on the fuelling, but on first impressions it’s especially impressive around town. 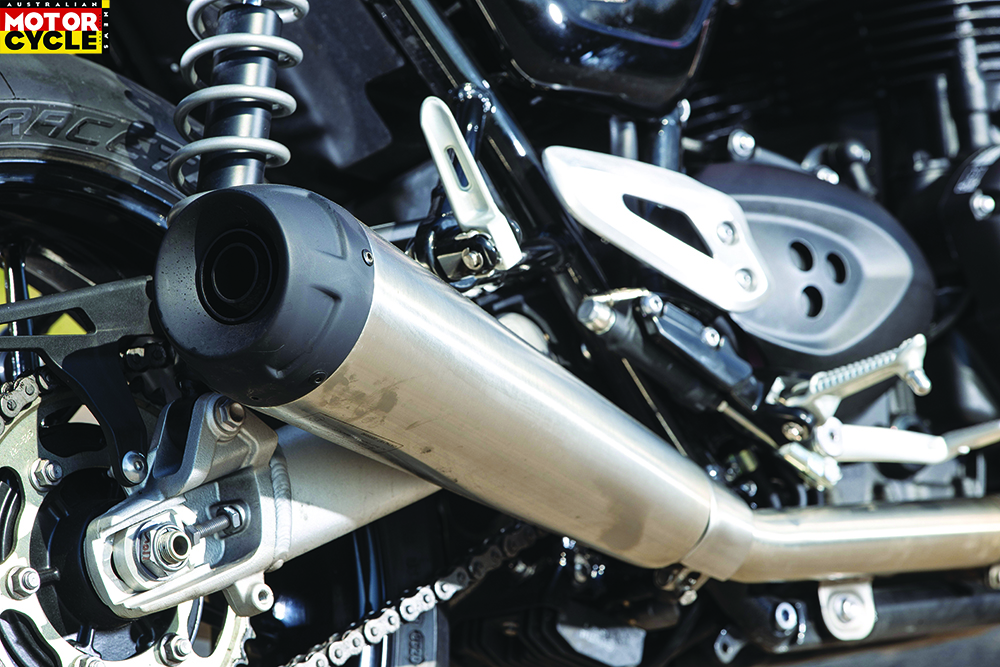 Because the engine wants to rev more, has less inertia (think running in trainers instead of clogs) and a fraction more power, Triumph was aware the 2021 bike may appeal to sportier riders – and therefore sharpened the steering, and improved the front-end with the new fork and better brakes.

Clearly Triumph means business, fitting Metzeler Racetec RR rubber, still with a 160-section rear. With such sporty rubber and revised handing, I was expecting the ’pegs to be reduced to mere stubs in a few corners, but ground clearance is generous, especially for this type of bike. The ’pegs are 38mm further forward and 4mm lower than the Thruxton’s, but it takes determination to get them to meet the road; the Speed Twin can certainly cut it in the corners. 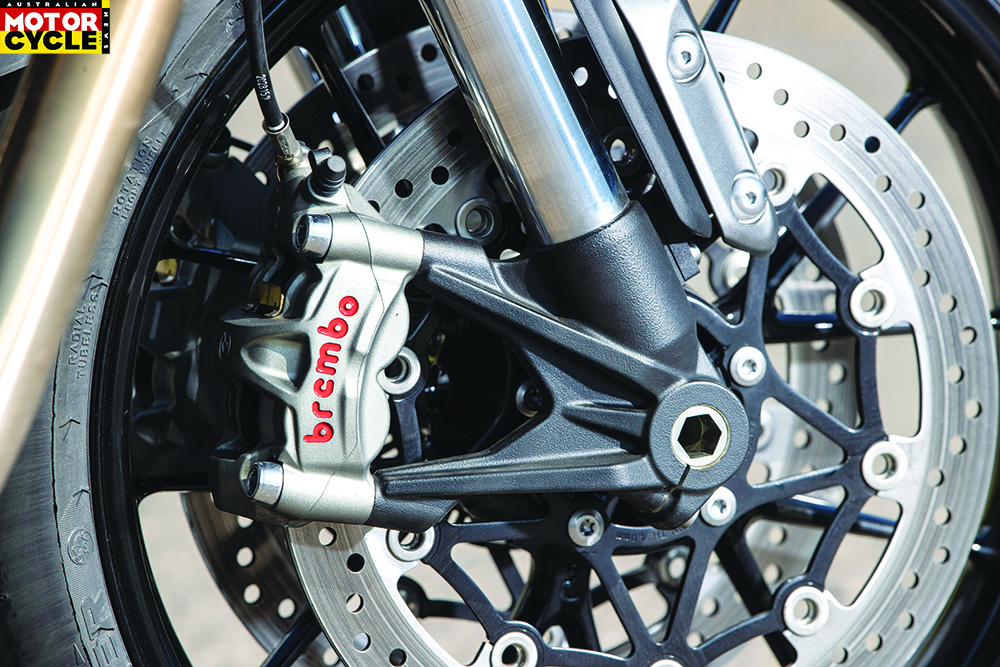 The new Marzocchi fork is non-adjustable but well set-up and I didn’t end my test ride wanting to dial in any damping changes. The twin rear shocks have preload adjustment to compensate for luggage and/or a pillion, but if you want trick suspension you’ll have to dig a little deeper in your wallet and opt for the less-comfortable Thruxton.

This isn’t a sportsbike, yet you could easily underestimate the Speed Twin. With sticky Metzeler rubber as standard it wouldn’t be outclassed on a trackday in the correct group. There is a delightful ease of use to the Speed Twin, a rewarding balance that makes you feel at home and confident straight away. It doesn’t sit on its nose like a pure sportsbike, nor does it hunker down on the rear. Instead, it steers from the middle, and is accurate and unflappable. When I deliberately attempted to put the Speed Twin in awkward situations, it always came back with the correct answers. 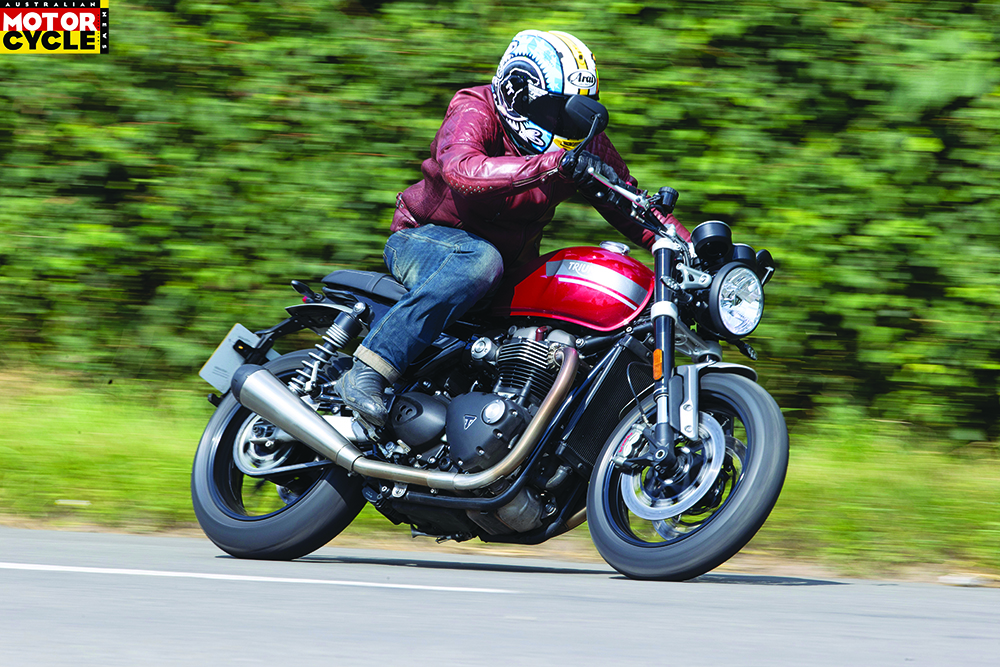 My only criticism of the chassis is of those twin shocks, which lack a little plushness. They are far from budget items but haven’t the class of the new fork. And I know this is questionable, but do you really need such track focused rubber on the Speed Twin? Yes, in summer, fine, but for the colder months I’d be opting for something more road focused.

Like the Racetec rubber, you could argue that Brembo M50 brake calipers are a little over the top. But they are easy to use with a light, one-finger feel around town and there’s no arguing they perform as well as they look, and the fork and tyres certainly allow you to make the most of their stopping performance. This set up also encourages later braking than before, which can, in turn, activate the ABS, although this is felt more on the rear than the front. 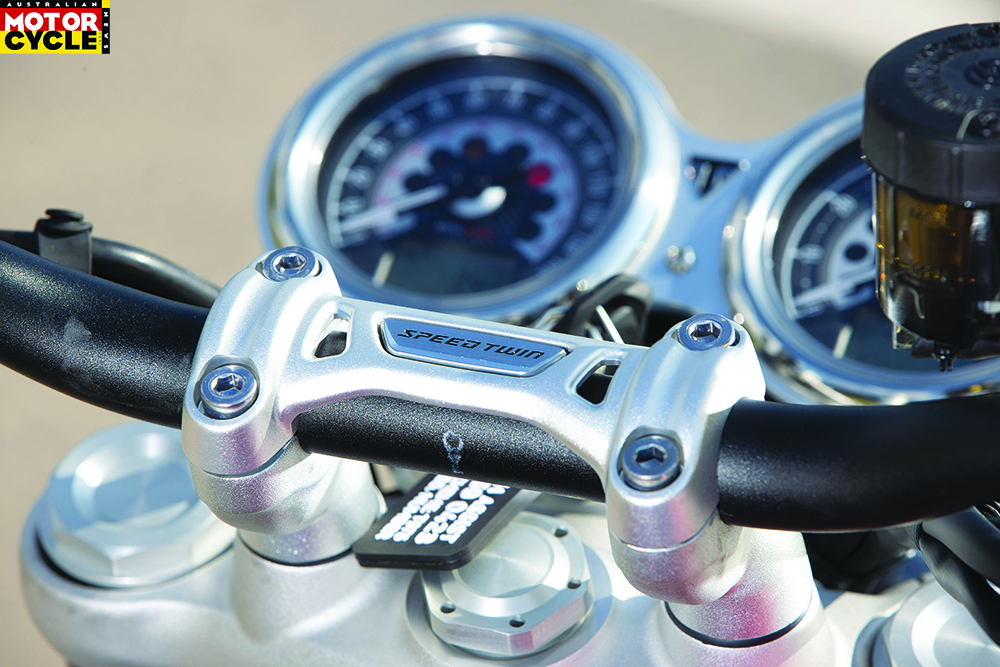 The Speed Twin has been a success story for Triumph, and I believe some of that is attributed to the bike’s overall appeal. It has most of the performance of Triumph Thruxton, but is far more usable as an everyday bike, with more forgiving ergonomics.

The riding position is comfortable, it’s an easy bike to manage around town. It’s no featherweight, but there’s a lovely balance, relatively low seat, light clutch, strong brakes. You’re a tad disappointed when you have to stop to fill up the 14.5L fuel tank, as your body parts aren’t complaining. 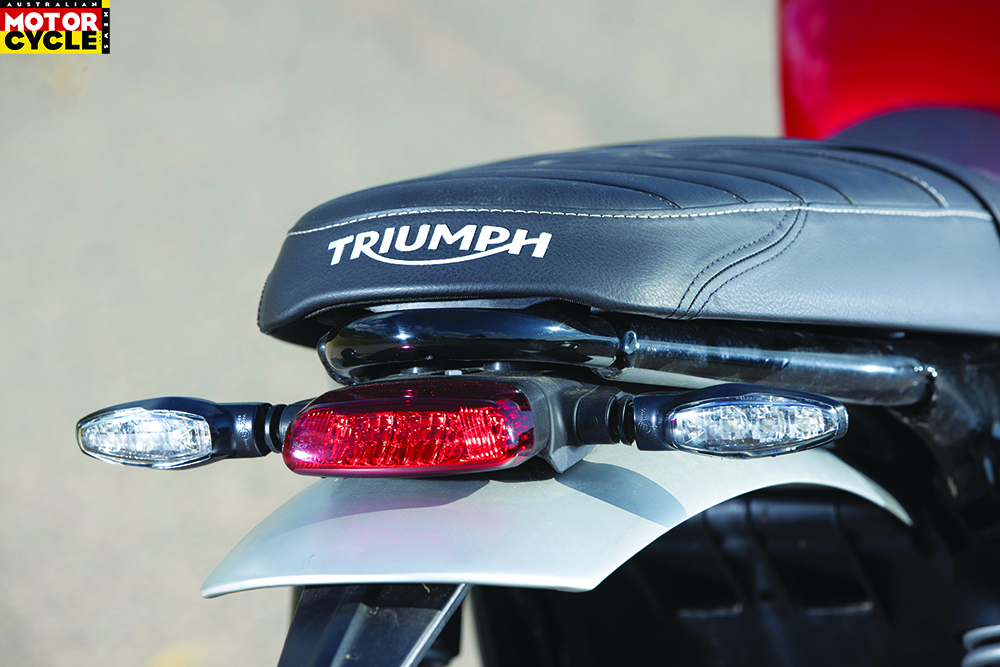 Triumph admits the new engine isn’t as frugal as the previous bike, quoting 5.1L/100km, however, I managed 4.9L/100km, which I’m more than happy with.

Cruise control would have been a nice touch and easy to add. The clocks look great in an ornate kind of way (though some of the fonts are too small), the switchgear is simple and easy to navigate, and the three simple riding modes can be changed on the move. I’d like a little more bark from the twin pipes; it sounds good, as good as to be expected due to tight emission regs, but I just want a little more… 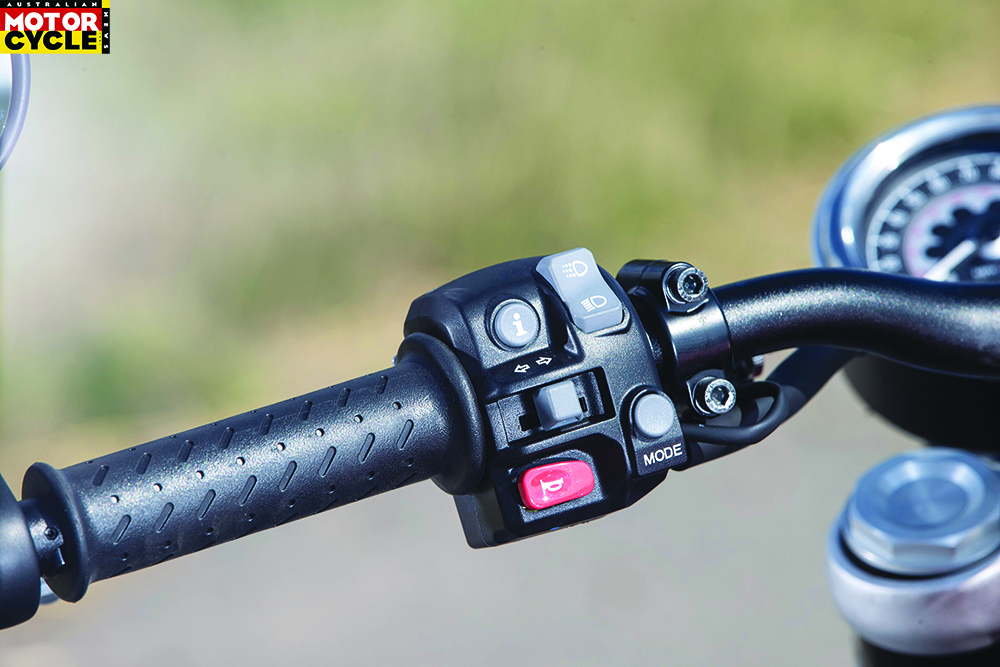 The Speed Twin is a bike you can live with very easily every day. It will appeal to hipsters who’ll want to personalise their Speed Twin, and be equally appealing to mature riders, who still enjoy a spirited ride but prefer the comfort and retro styling the Speed Twin delivers. It looks good, and you’ll feel proud walking towards it in a busy street.

The Speed Twin has that wow factor, and should deliver that Christmas morning feeling every time you open the garage door, because it looks great in the metal. There are over 50 official accessories should you want to personalise or change anything (I’d just pay a little extra for the red version). 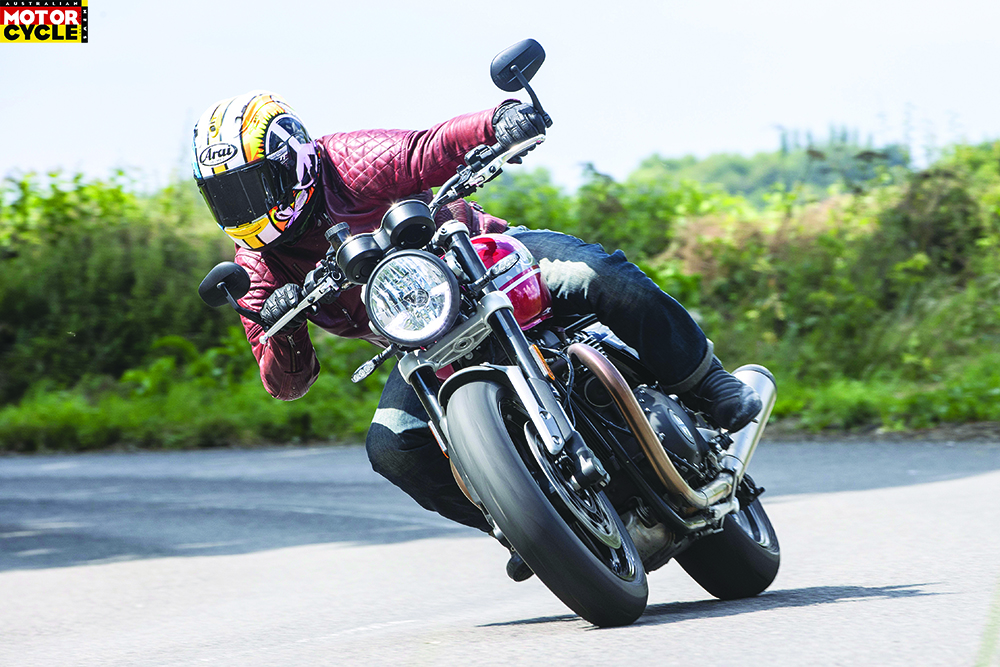 It’s now something of a ‘sensible’ Thruxton, sportier than ever with quicker steering, improved brakes and handling, plus added engine performance. It is not a monumental leap, but a significant improvement to the handling, braking and performance.

The older bike was a sales success story for Triumph and I believe the new bike will continue that trend. As appealing as it is versatile, it’s one of those bikes I wish I had at the back of my garage, arguably one of the best retro bikes on the market today. 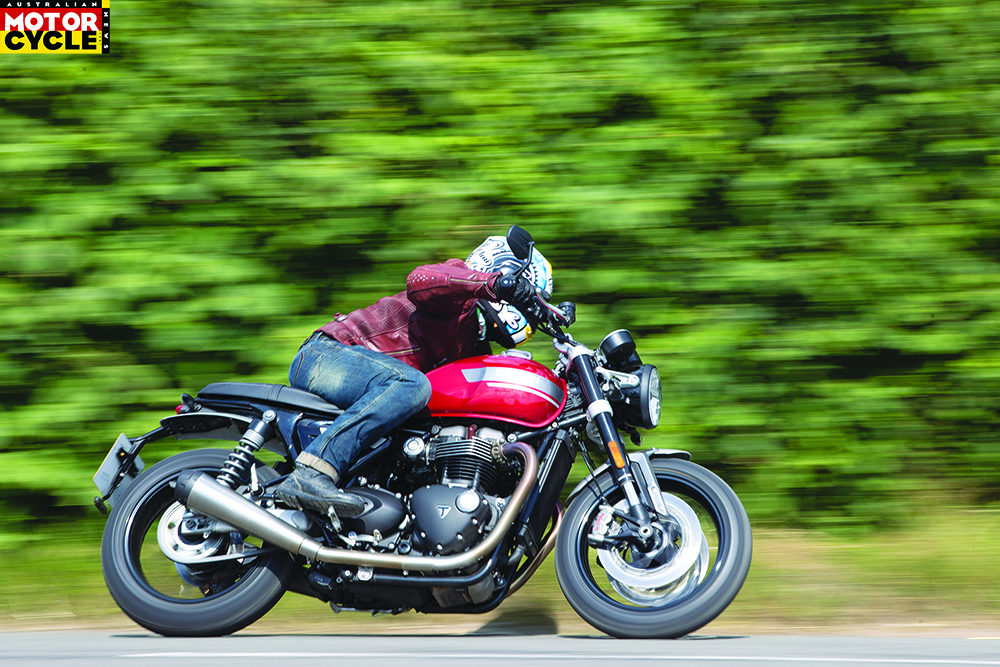