It caused a stir when it was unveiled at EICMA last year, but can Moto Guzzi’s new middleweight adventure bike live up to its neo-retro looks?

Moto Guzzi produced one of the big hits of last November’s EICMA Milan Show in the shape of its retro-themed V85TT adventure tourer. The production version of the Concept 85 showbike displayed at the same show one year earlier, this is the opening shot in a series of forthcoming new Guzzi middleweight models using the same Euro-4 compliant engine platform. The chance to spend a 200km day in sunny Sardinia riding the result on the hilly, switchback roads of Italy’s second-largest island demonstrated very well what a significant model this is. The V85TT is a replacement for the Stelvio, Guzzi’s previous dual-purpose model dating back to 2007, which was scrapped because it would have been too costly to upgrade its elderly 1151cc motor to Euro 4 compliance. The V85TT is powered by an all-new air/oil-cooled 853cc engine with just two valves per cylinder, so it’s positioned in another category in terms of both capacity and engineering. Part adventure tourer, part streetfighter, part street scrambler, it’s a different type of motorcycle than anything Moto Guzzi has done of late. 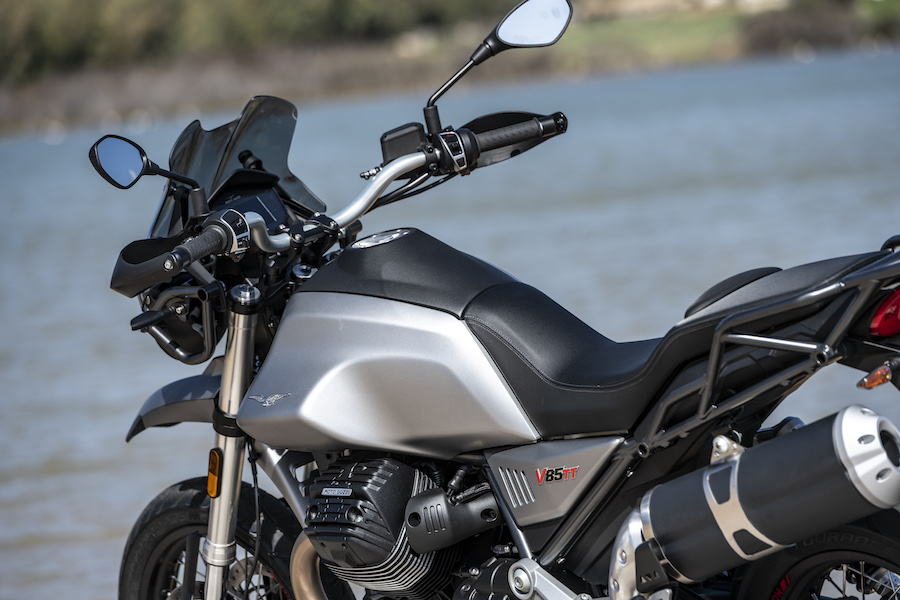 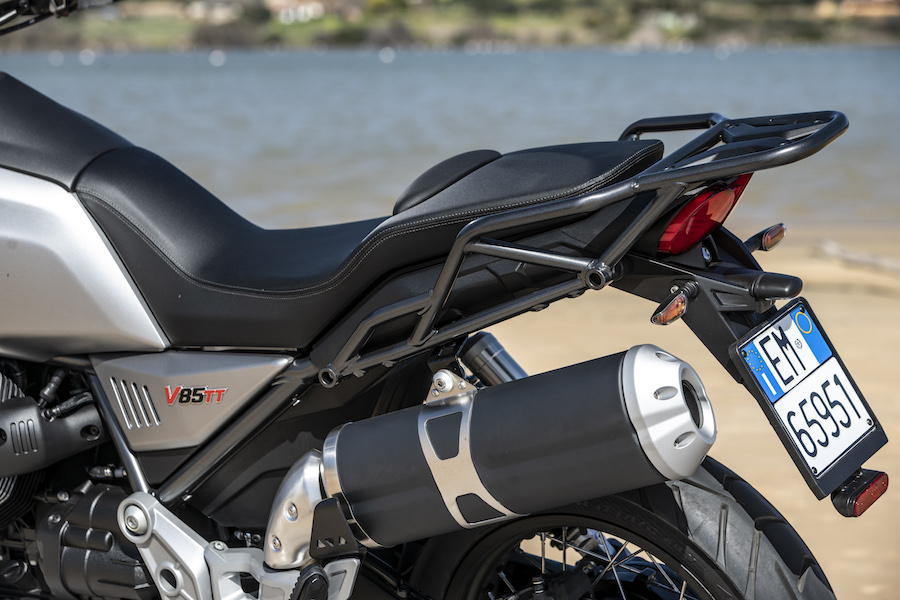 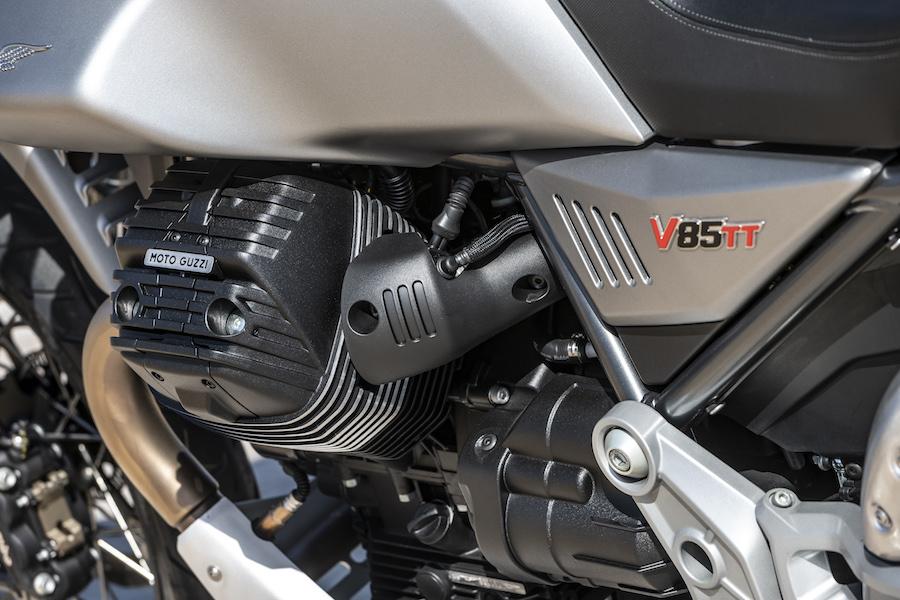 It’s available in a choice of five colours, with the three so-called Urban single tints of blue, grey and red, each with a black frame, retailing for $18,990, and all fitted with tarmac-friendly Metzeler Tourance Next tyres. An extra $600 is needed for the so-called Evocative two-tone red/yellow and red-white versions each with red-painted frame, which boast a much classier-looking seat fabric and carry slightly more offroad-focused Michelin Anakee Adventure rubber. Both variants come with a 2.50 x 19-inch front wheel, and 4.25 x 17-inch rear. Wire wheels are fitted as standard with alloy rims, but both the 110/80 and 150/70 tyres must carry tubes – tubeless rims would have been much more expensive. The V85TT’s new 84 x 77mm 90-degree transverse V-twin motor produces a claimed 59kW (80hp) at 7750rpm, alongside 80Nm of torque at 5000rpm. Moto Guzzi reckons 90 percent of that torque is available at just 3750rpm and the ultra-flat torque curve on the supplied dyno chart backs it up. At the other end, the limiter is set at 7800rpm, making this engine the most eager-revving of Guzzi’s family of overhead-valve motors, despite being a two-valve design rather than a four-valver. That’s because Piaggio’s team of engineers wanted to deliver a smooth and ultra-flexible power unit that was more responsive than previous such engines, with reduced inertia. They’ve achieved this by producing a semi-dry sump design with the oil tank positioned in the lower half of the crankcase complete with sight glass and twin oil pumps, in a format that was ubiquitous in Italian multi-cylinder Grand Prix engines of the Classic era (though ironically not Guzzi’s own 500cc V8 mechanical work of art, which had a separate oil tank). This reduces oil drag on the crankshaft assembly which, with lighter conrods and pistons, is 30 percent lower in weight than previous Guzzi small-block motors. This means a sprightlier pick-up, especially from low revs. 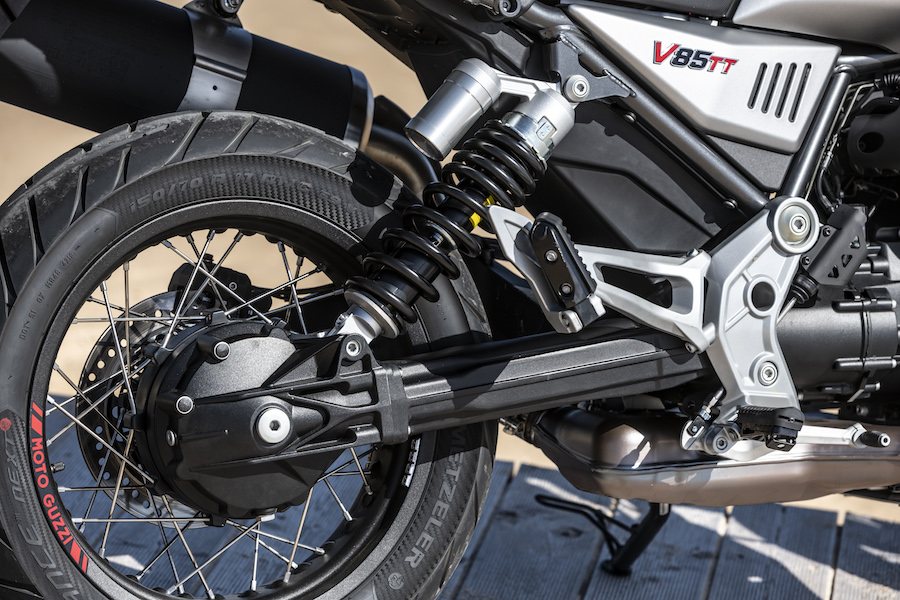 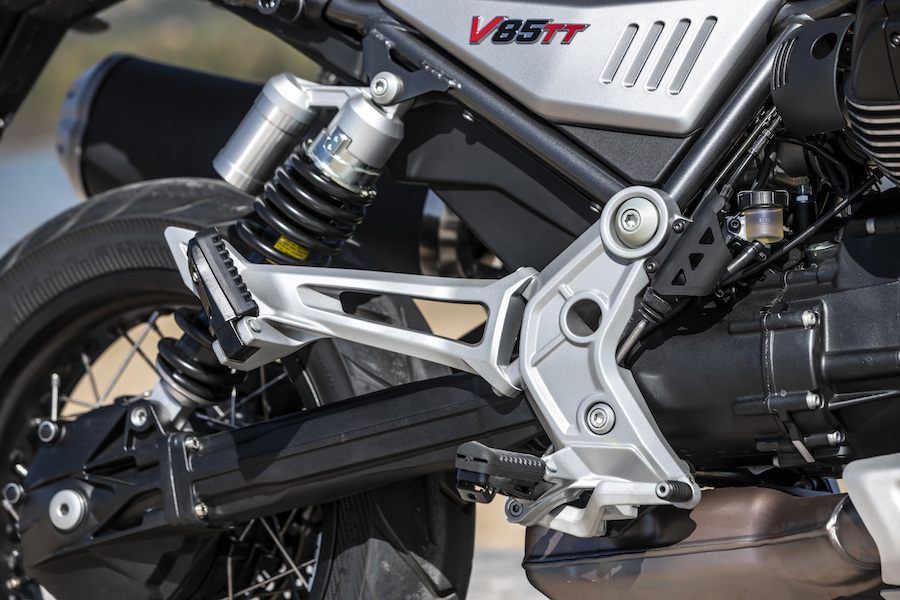 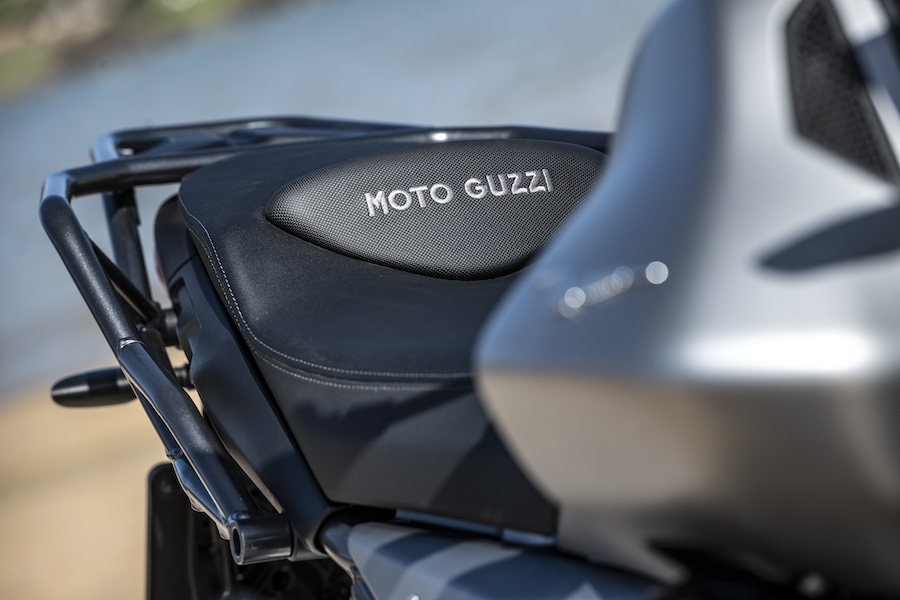 That’s aided by the use of titanium for the 42.5mm inlet valves in the heads that feature completely revised porting and a new combustion chamber design. The 35.5mm exhaust valves are still steel and they’re all operated by aluminium pushrods with redesigned roller tappets, again resulting far quieter operation of the valve gear – there’s none of the rattles or noise of previous overhead-valve Guzzi motors. Screen not adjustable for height

Low-speed damping could be better Moto Guzzi is Italy’s oldest motorcycle manufacturer. It’s been in continuous production since its birth 98 years ago in 1921.