Quirk and character that’ll have you yelling out “two pots please!”

Sitting astride the Moto Guzzi V7 II Special Scrambler, I look down to be greeted by a familiar sight. Just ahead of my knees are the exposed alloy rocker covers fastened on top of the pots (that would be cylinder heads hipsters) sticking out in the breeze. If I were Rossi, I could air-dam out my knees, away from the 22-litre tank – one of the most gorgeous shapes in motorcycling – and catch the strong wind blowing past one of the slimmest bikes around.

It is an irrefutable truth that Moto Guzzis have a peculiar way of winning riders’ hearts. For the first 10 minutes on board you might well loathe it. If you scoot along for a week you might just fall in love. And if you spend a whole month with one you could find yourself parking one in the shed for a lifetime. A Guzzi (pronounced Goot-sie) is without question, and thankfully, totally unique. While I can ride a whole bunch of modern test bikes and only come up with a handful of criticisms, with Guzzis I can find plenty. For a start, this accessorised V7 Special shakes and feels a little awkward; but then it is a transverse 744cc V-twin, and it’s a Guzzi. The donk only produces 37kW, which doesn’t amount to significant power; yet the classic-looking sled gets along pretty well and feels bloody excellent on the way. A strong 60Nm of torque presents itself way down at 3250rpm, meaning there’s not much need for gear changing; however, the bottom three ratios are slow and deliberate while the top three gears are rapid and quiet. Yep, it’s a Guzzi.

You’ll notice that a lot of sentences are ending with the words “it’s a Guzzi”. That’s because few motorcycles are this simple and so delightfully engaging. And while you definitely get some bad with the good, one look at this pretty little thing, imbued with so much character, and you know you can forgive it almost anything. Now, if you want a Guzzi just like this one, you will need ‘scramble’ a standard V7 Special – already fitted with wire wheels – and plop down an extra five thousand dollars for the twin exhausts and more tourer/commuter-style looks. Or you could wait for the very limited edition Stornello.

These days, manufacturers are becoming masters of fusing retro with modern technology. The original V7’s carburettors have now given way to fuel injection, and double leading shoes (aka drum brakes – google ‘classic’ racing) have made way for Brembos with Bosch ABS and Moto Guzzi’s very basic version of traction control. The general shape and specifications, however, look almost unchanged in decades. And the end result is a beautifully crafted take on an icon of transverse V-twin simplicity. With a wave of a credit card over the standard V7 we now have a blinged to the backblocks dream machine worthy of The Great Escape. Even if its just big city escapism, the Pirellis, flyscreen and chrome rack hint help make it happen.

A single 320mm disc front and the 260mm rear are not hugely powerful but work as well as required. And if you learn the Latin way of keeping up the corner speed, the ‘Special’ will teach you a new language. That way you rely less on the brakes and more on trusting the supple suspension and tight chassis. It is slightly slow and uncommunicative until the Pirellis have turned in and the throttle is opened, but then the magic starts. Guzzis handle well for shaft-driven, quirky, retro-looking things. At different times I had both my two girls on the back. The older one loved it, and the 10-year-old daughter … she thought it was the worst motorcycle she’d ever been on!

At first anyway. Later on she was exchanging waves with a similar-aged girl in the passenger seat of (what I guess was) her dad’s Ferrari 458 Italia. I’m positive the girl in the car was jealously mouthing “I want to be on that motorcycle not in this claustrophobic prancing thing”. And no way was my daughter giving up her seat behind her dad. Yep, it’s a Guzzi.

+A Guzzi to love

– A Guzzi to learn 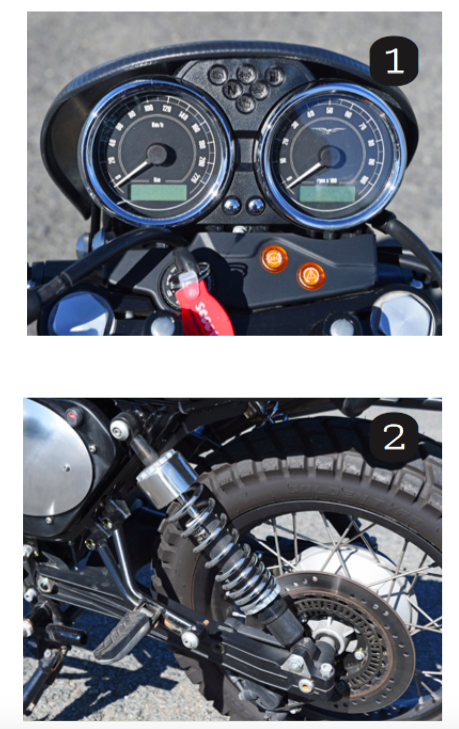 1. The traditional dash looks the goods, but the ABS light at the bottom seems a bit of an afterthought 2. Dual shocks at the rear provide a decent ride 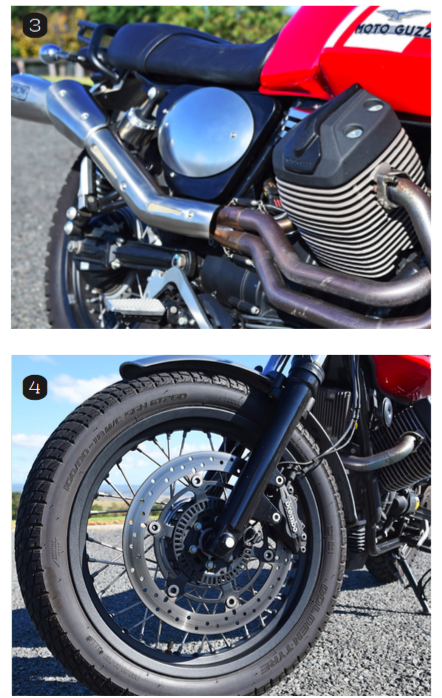 3. You and Autosol will become good friends – plenty of chrome to shine! 4. A single disc at the front keeps steering light