Over the years Ducati has produced some iconic machines at the pinnacle of both style and performance categories and the firm’s heavily revised Diavel 1260 S is the latest in a long line.

The Diavel has been in production since 2011, during that time it has received a few upgrades and face lifts, yet a complete redesign was required to update the bike in order to keep up with the ever-evolving desire for new technology. The new 1260 is just that; an overhaul, featuring a new engine, a newly designed chassis and, for the top-of-the-line S model which I tested, the very latest suite of electronics.

It’s a niche Ducati which occupies its own corner of the market. It breaks new ground not just for the Bologna brand, but for the segment it more or less owns and, while it won’t be for everyone, it’s a testament to Ducati’s ability to constantly push styling and performance boundaries. The new engine is the star performer at the heart of the beast, it features an increased capacity from 1198cc to 1262cc thanks to employing the firm’s variable valve timing V-twin engine. Good for 129Nm of all-important torque, it unleashes a sizeable increase in bottom end and midrange grunt compared to the model it replaces. The fun doesn’t stop when the needle reaches the northern end of the tacho, either. It’s a moderately revving engine and suits the chassis and riding style the Diavel demands. Once the variable timing kicks in, it unlocks the top end which can achieve almost 120kW (160hp), that’s some impressive boundary pushing for a machine destined to spend most of its time around town.

Ducati has also made substantial revisions to the chassis to achieve an all-round improvement in steering and agility. Sharper rake and trail figures have been adopted to aid steering, while a new engine position offers better weight distribution and also makes room for a more efficient positioning of the radiator which in turn aids improved cooling. 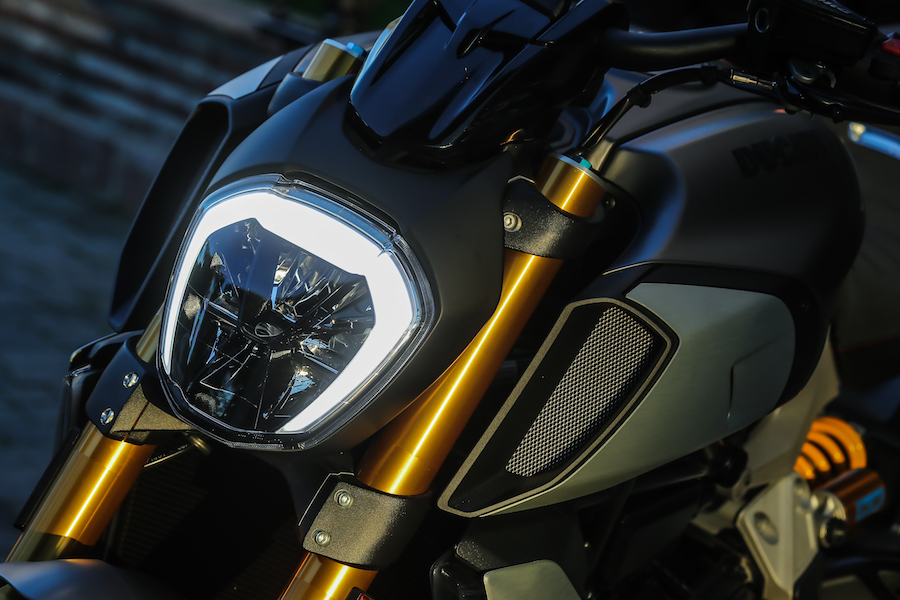 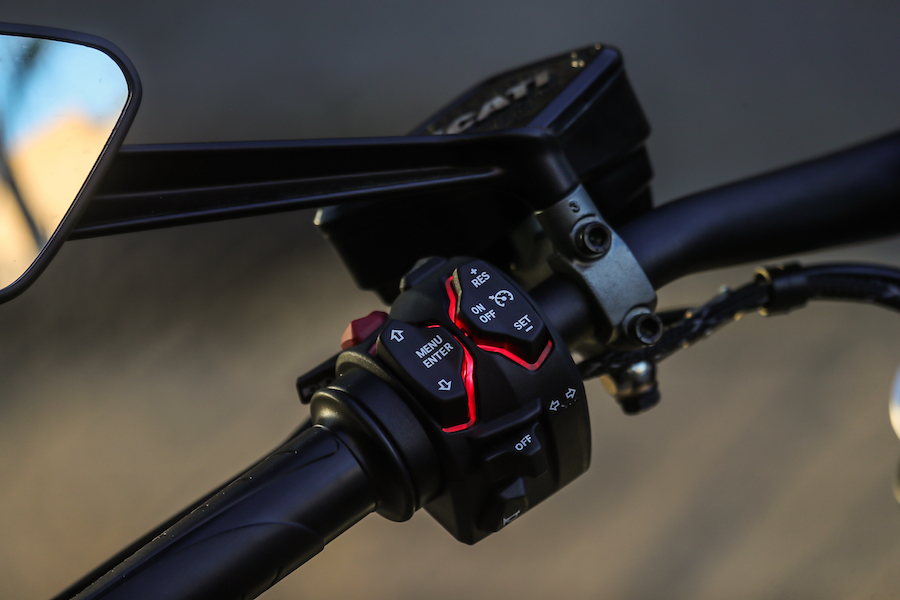 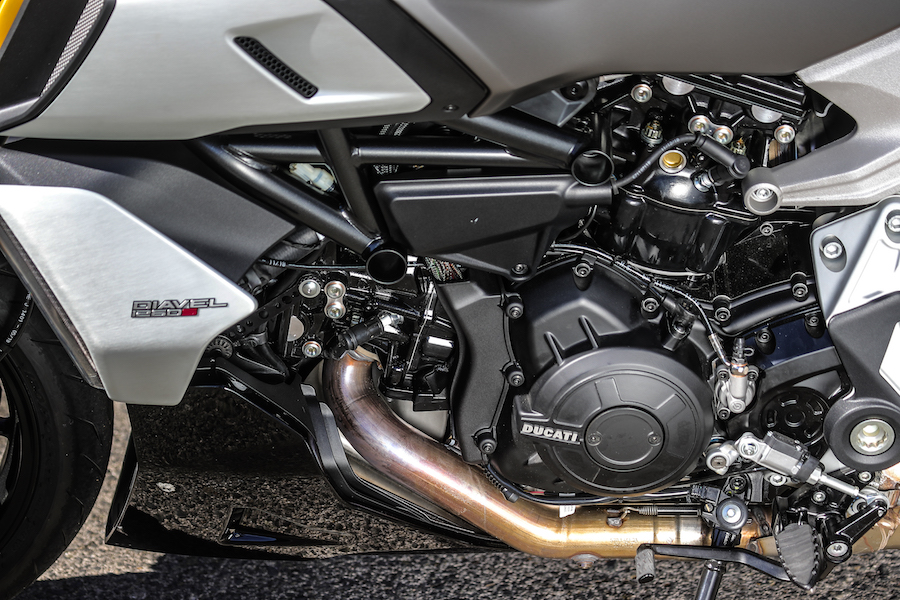 Ducati has achieved something very special with the Diavel’s concept. Essentially, it’s a combination of categories thrown into a precise mix and the results have proven that the world-class, race-winning manufacturer can make a bike that looks like a cruiser (on steroids) as well as one that turns like a sportsbike.

The chassis is nimble and quick to steer and holds a line very well on the exit of even the tightest turn. The Diavel really comes into its element on faster more flowing turns, feeling increasingly balanced as your speed builds. The S-model’s Öhlins suspension was sprung and dampened to the point where even fine tuning of the clickers wasn’t necessary. The only real downside of the Diavel’s well-rounded handling package is its lack of front-end feel when you enter slower turns and which also feels slightly harsh on bumps. It was here that the Diavel pushed the front at times which returned a vague feeling through the ’bars. The negatives were easily over shadowed by the fact that it is a formidable machine on twisty mountainous terrain and it proves its spring heritage over and over. Ducati has also been known to produce some incredibly sophisticated electronics in the recent years and the S-model Diavel wasn’t spared from such technology. The traction control system for this model was developed entirely in house and the algorithms and parameters carefully blended to give the rider something quite unique.

The 250km loop through the Spanish countryside proved to me the system is nothing short of exceptional in both wet and dry riding conditions. The same can be said for the lean-angle sensitive Bosch ABS. In addition, the three main mode settings; Urban, Touring and Sport have been tuned to deliver a clear and decipherable difference between each other in default mode, and all boasting further customisable options within each.

Finally, Ducati has played one last ace and threw in a six-axis sensor to monitor and control a multitude of data and make decisions about just exactly what the rider is given at the rear wheel. Pretty high-tech stuff from a bike that doesn’t exactly fit the superbike category. The dash is compact and informative, yet it takes some working out from a user’s standpoint, especially for music and phone integration while you ride. Sure, it’s not a deal breaker, but the layout isn’t perfect. The cruise control function, however, is precise and silky smooth, while the backlit handlebar buttons are an excellent addition. You also find a multidirectional quickshifter on the S model that is a must have these days, if only purely for vanity, but once you hear the pops and cracks it makes on gear selection you’ll be sold, too. 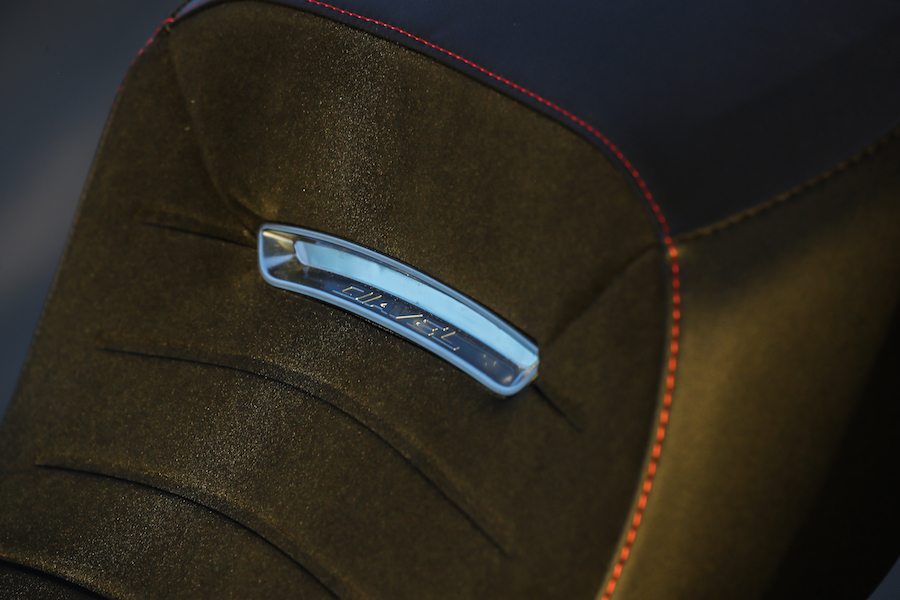 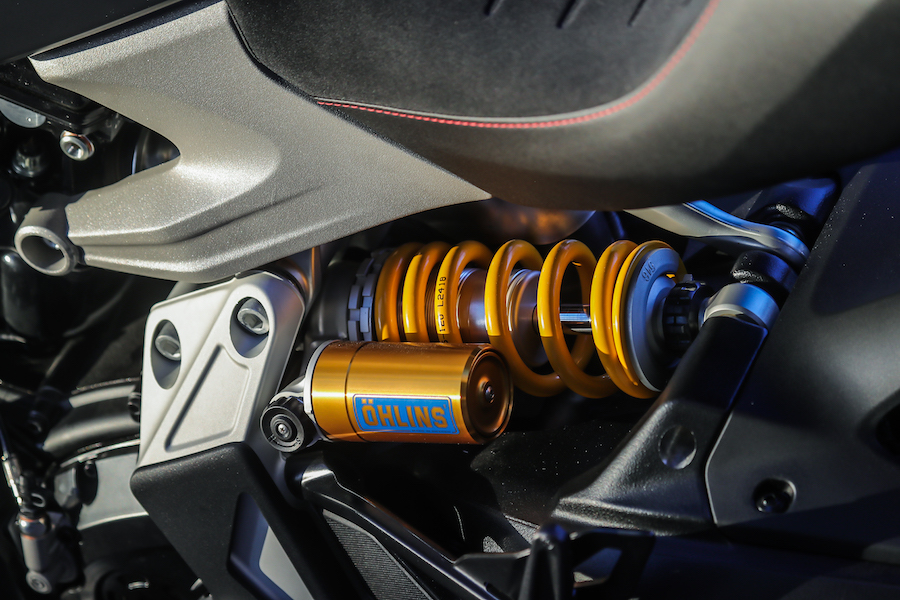 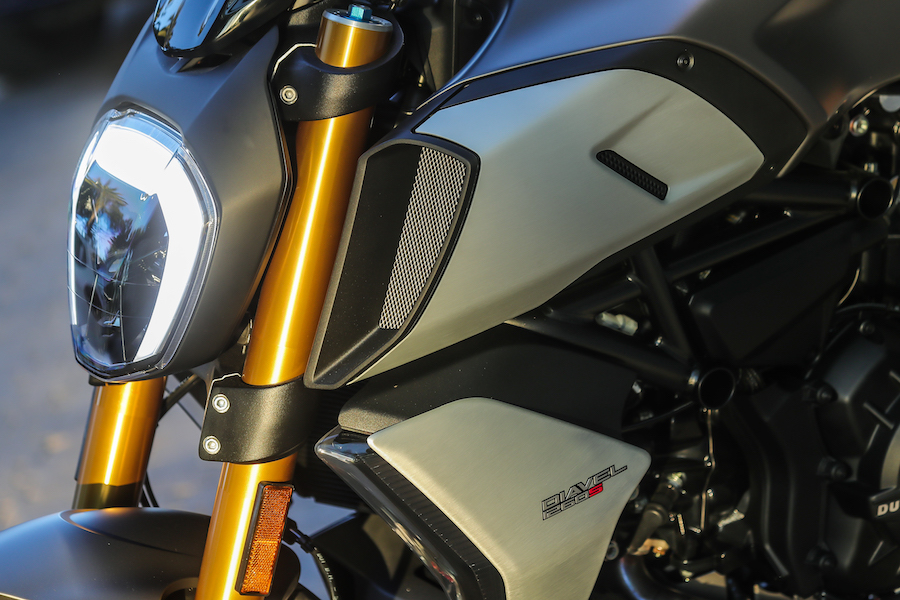 All of these features make for great for a top-end sportsbike and while the Diavel isn’t a bike you would see frequenting a track day, you could certainly be forgiven for thinking it would be at home on a racetrack (if you just gave it a windscreen)!

This largely comes down to rider positioning. In essence, it would have to be one of the best chassis on the market in terms of rider position for street duties. The ergonomics allow for a position that is somewhat aggressive, yet relaxed and comfortable for longer rides. It even allows the rider to throw a knee out for added spirit should the need arise. Ducati’s design team has found a brilliant balance here, something that is unrivalled for this type of bike. Not once was comfort an issue and the position would easily suit that of a vertically challenged rider but without being an issue for a lanky string bean (like me) gracing the saddle. 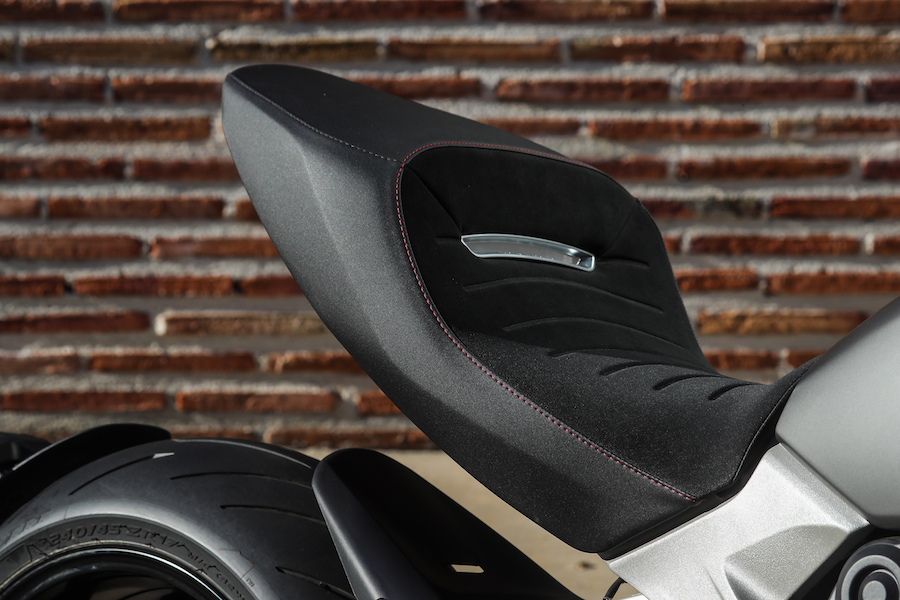 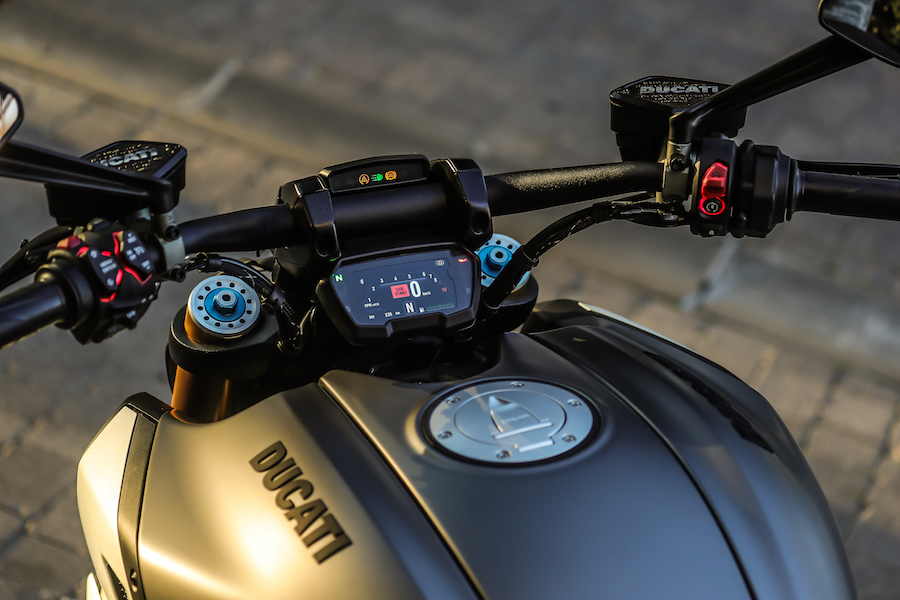 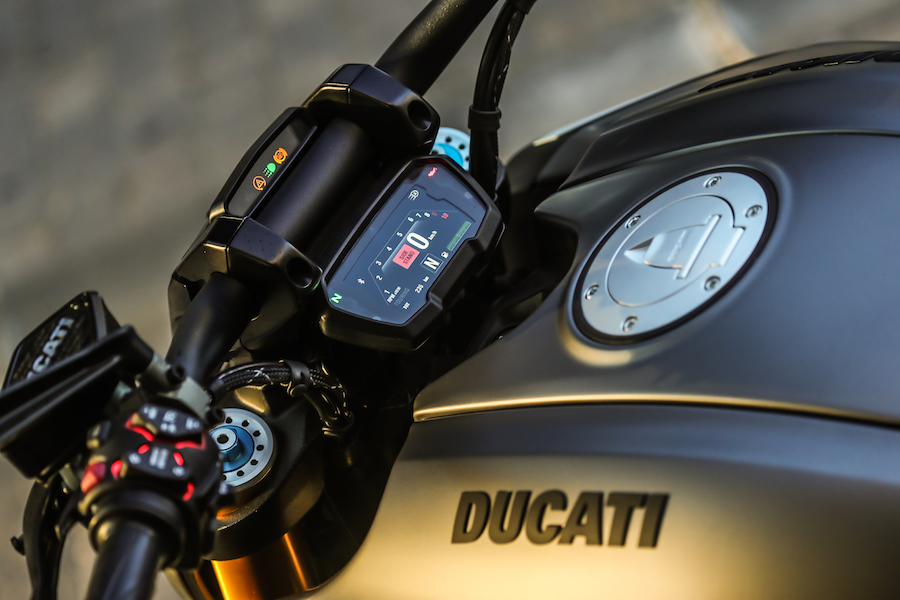 This is in part where the secret of the Daivel’s success undoubtable comes from. So often a rider will place a judgement on whether or not a bike suits, based on how comfortable the feeling is once perched on its back. Ducati has managed a compromise of categories all tied up into a package that goes like the clappers, turns like a sportsbike, yet feel like a cruiser.

You get a lot of motorcycle for your money, but at $32,490 it’s not going to be an easy sell. The base model 1260 starts at $27,590 (see sidebar for exactly what that not-quite $5K extra buys you), but it’s an exotic and unique bike which is loaded with bling. Compare it to Harley’s relatively low-tech FXDR’s asking price of $35,495 (ride away) and it’s easy to see it as pretty good value, considering its high starting point. 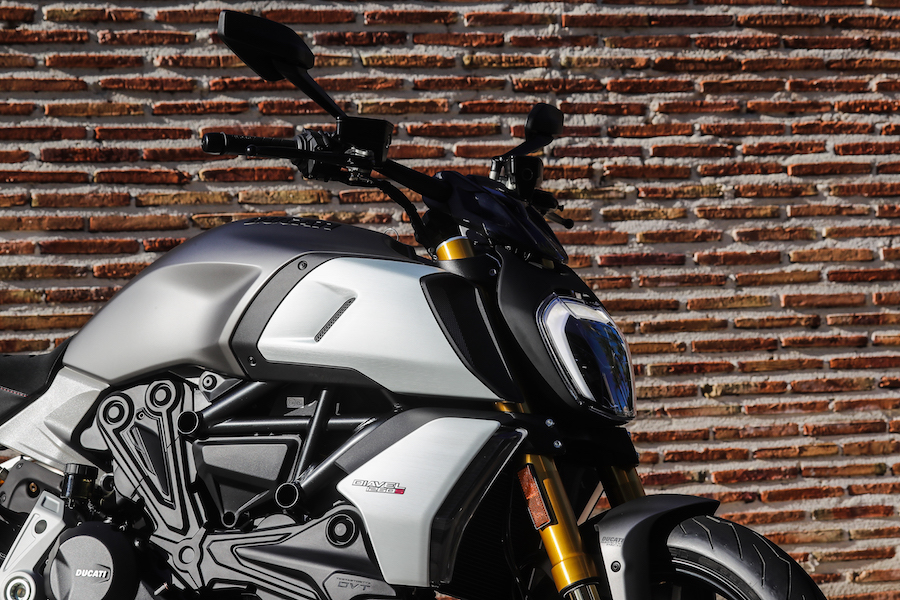 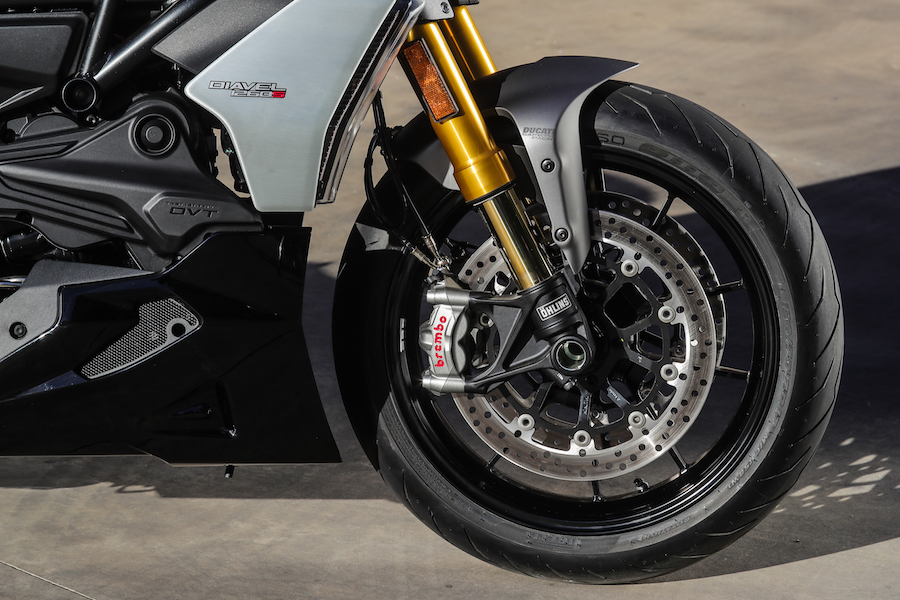 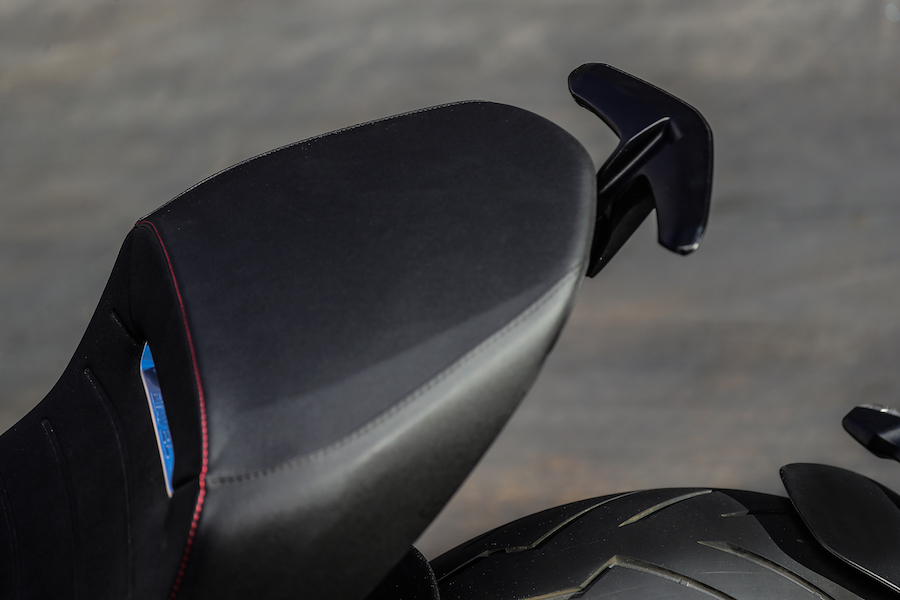 The Diavel has been classed as many things; a power cruiser, a sports roadster, even a maxi nakedbike, but Italian muscle seems to be the most fitting for me. The Diavel is not a conventional motorcycle, but it’s a lot of things to, I suspect, a wide range of riders. Ducati has taken a bold premise and morphed it into something that is capable of such much more than your average cruiser.

It doesn’t fit any particular mould, but why should it? We need innovation like this to keep things interesting. Ducati removed the typical-cruiser stigma of this bike though it still rides like a lounge chair if you want it to. But it’s knowing what’s possible that elevates the Diavel S to a higher plane. This bike can be ridden fast and there is just the right amount of pedigree filtered down from the top end of the market to make it exciting. Make no mistake, these days image is everything, but when you can back it up with performance that can potentially blow the socks off many current sportsbikes, that’s a package worthy of accolade. There’s two versions, what are the differences?

The price difference between the base model and the up-spec Diavel 1260 S (not to be confused with the firm’s XDiavel, which is a different model altogether) is a significant $4900. Both versions of the new Diavel are powered by the same 1262cc Testastretta DVT engine which is good for 129Nm of torque at 7500rpm and 117kW of power at 9500rpm. The S model gets a fully adjustable Öhlins suspension package compared to a nameless 50mm upside-down fork (two millimetres larger in diameter than the S-model’s 48mm upside-down unit) matched to a monoshock which is adjustable for rebound and preload. The riding and power modes are the same across the two bikes, as is the cornering ABS, the traction control system, the wheelie, launch and cruise control, too. In fact when it comes to electronics, the only differences are the S benefits from the quickshifter and the firm’s multimedia system.

The multimedia system is compatible with the Ducati Link App which lets you customise the electronic rider aids like the ABS and traction control through your smartphone.

The S also gets machined wheels compared to the standard cast affairs on the base model.