Yamaha is dominating the small-capacity production racing series these days and, it turns out, for good reason

Considering I looked past it thinking it was probably the lead rider’s YZF-R6 when I lobbed at the Aussie launch of Yamaha’s updated YZF-R3, it’s fair to say the Japanese firm’s design crew hit the mark in capturing the look of its R-series sportsbike family. But what that day and the next one would hammer home to me, is the R3 isn’t just a little bike trying to evoke the relevance and credibility of its bigger siblings, the new-for-2019 Yamaha R3 really rocks in its own right.

The competitive and lucrative learner segment is really important to all manufacturers, not just Yamaha, because getting bums on their brand of seat increases the chance of that particular bum remaining on that particular brand as a rider moves through to an unrestricted licence. And, when eight out of the country’s 10 best-selling roadbikes last year were from the learner-approved category, the reasons to invest in it are two fold. According to Yamaha, 70 percent of the R3’s target market is made up of first-time riders and daily commuters. And of the 712 people who purchased a new Yamaha YZF-R3 in 2018, Yamaha reckons that 320 of them – or 45 percent – are first-time male riders, no doubt wanting to channel their inner Valentino Rossi as they filter their way to their work day.

My first day on the bike was spent purely on the road and, while my ex-racer’s mind was looking firmly forward to the next day’s track sessions, I couldn’t help but be impressed at how ergonomically comfortable I felt on the LAMS-approved machine straight away. And looking around at the large array of different sized riders among the cohort of Aussie media, it’s fair to say it’s a largely accessible machine. The second thing that hit me almost immediately was just how solid the thing felt underneath me and it’s something that LAMS riders will really benefit from. As the former general manager of a rider-training company, I’ve got a pretty good understanding of what new riders are looking for in a machine, and regardless of whether they are searching out scratching roads, cruising roads or commuting roads, learning their craft on a motorcycle that feels like it will stay firmly planted underneath them really is worth its weight.

And it’s not just the way the bike carries itself, either. The clutch operation, for instance, is LAMS-bike perfect, and the throttle is really easy to match with the clutch action. New riders will find it easy to adapt to the revs of the engine, and the bike is light and easy to manoeuvre at really slow speeds which, as P-platers will all-too well know, is important if this is the bike you are banking on to pass your provisional-license test on. 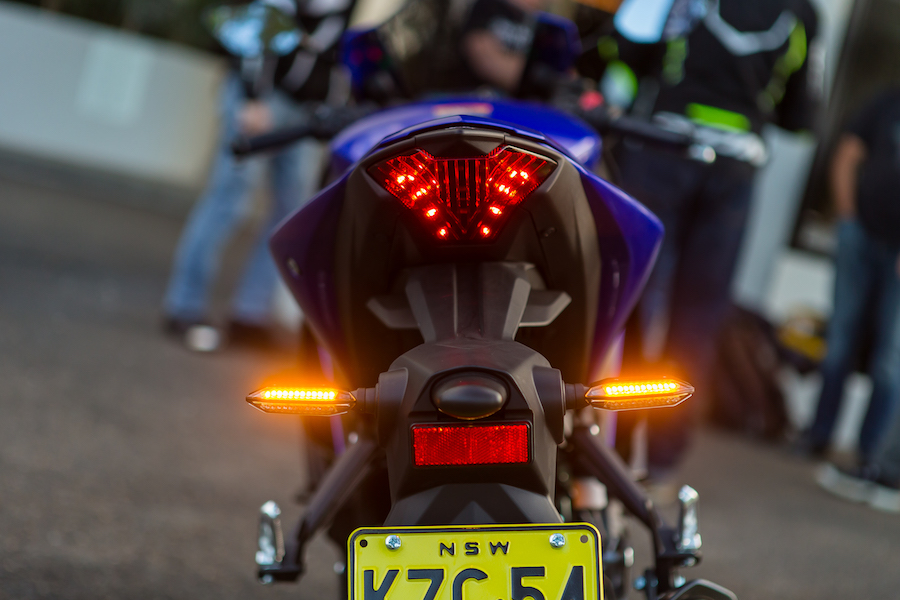 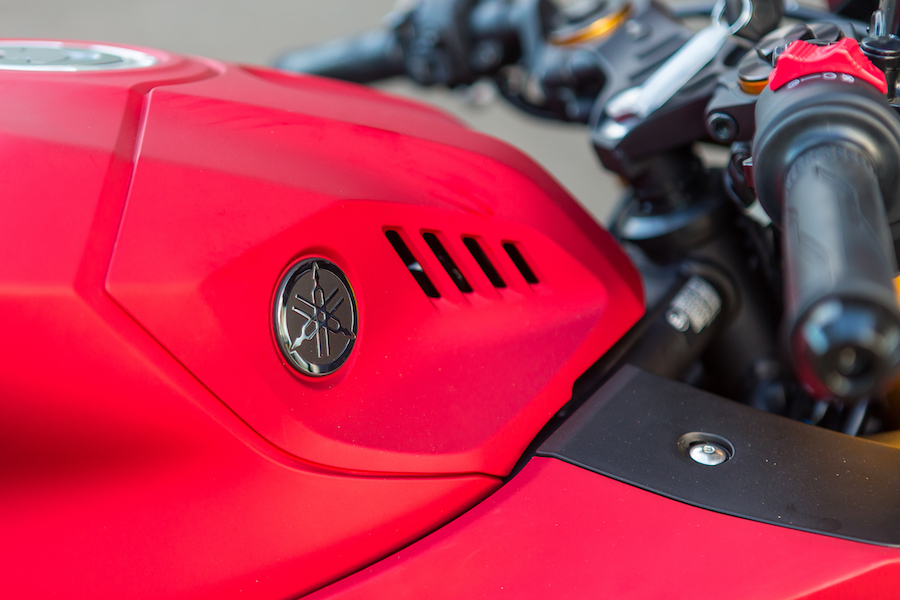 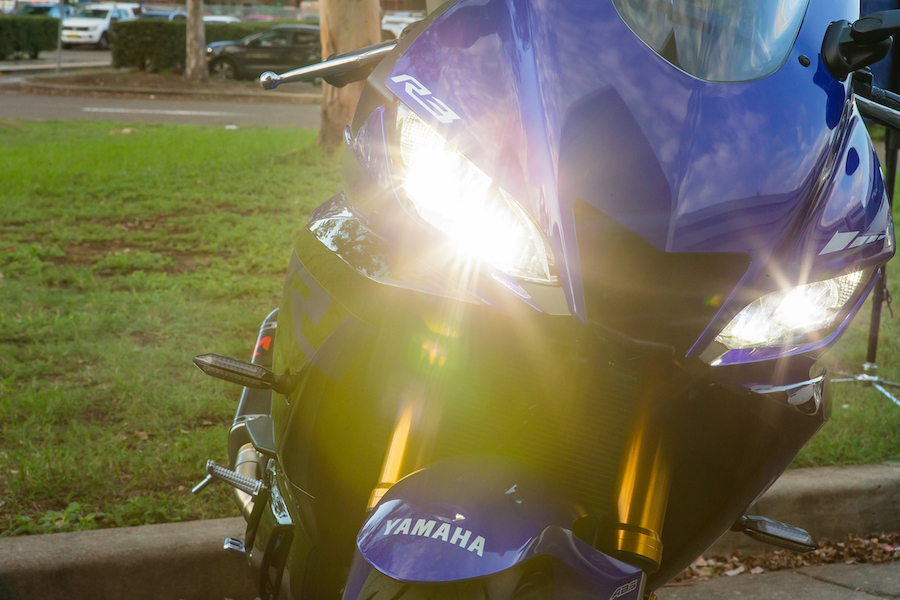 Our ride route included New South Wales’ Bells Line of Road through the Blue Mountains north west of Sydney and it was half-way along this magical road that I began to recognise the R3’s magic bullet – in twisty environments like this, it turns, stops and accelerates quick enough to keep pace with larger capacity bikes, despite being similarly easy to get around the witch’s hats of a training range. It’s an incredibly broad ranging machine – where was this when I was learning to ride?

The clear stand out in the improved handling abilities – which have always been good – is the new upside-down KYB 37mm fork. Replacing a 4mm larger-diameter right-way-up affair, its extra rigidity combined with the already-capable chassis, allows me to run the brakes deep into corners with no noticeable flex or vague carry-on from the front end. That’s more of that planted feel I was referring to earlier and leads to higher confidence for any rider, new or old. It’s astounding feel for a relatively inexpensive LAMS machine, all the more impressive when you factor in the really mixed conditions of the road surface, dealing with all sorts of road surface changes. 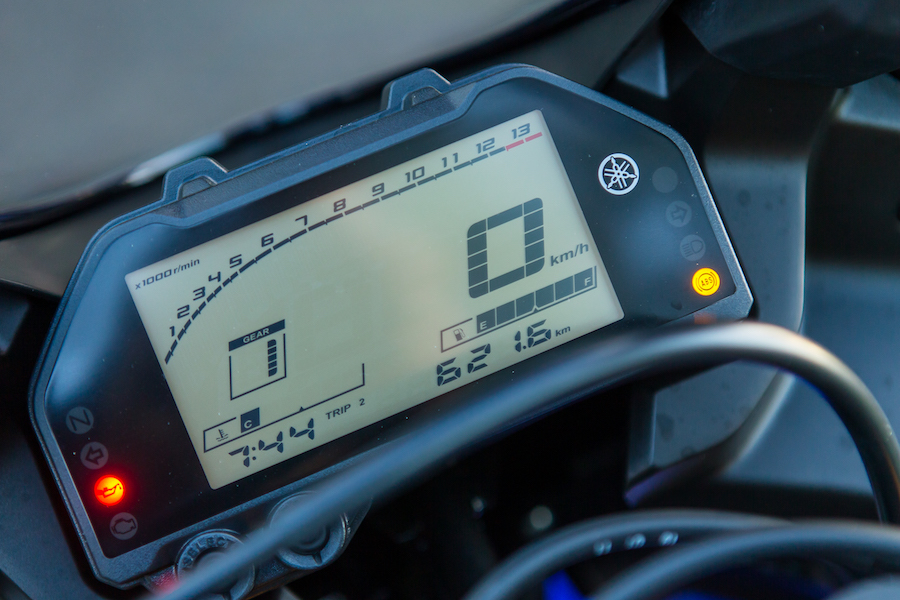 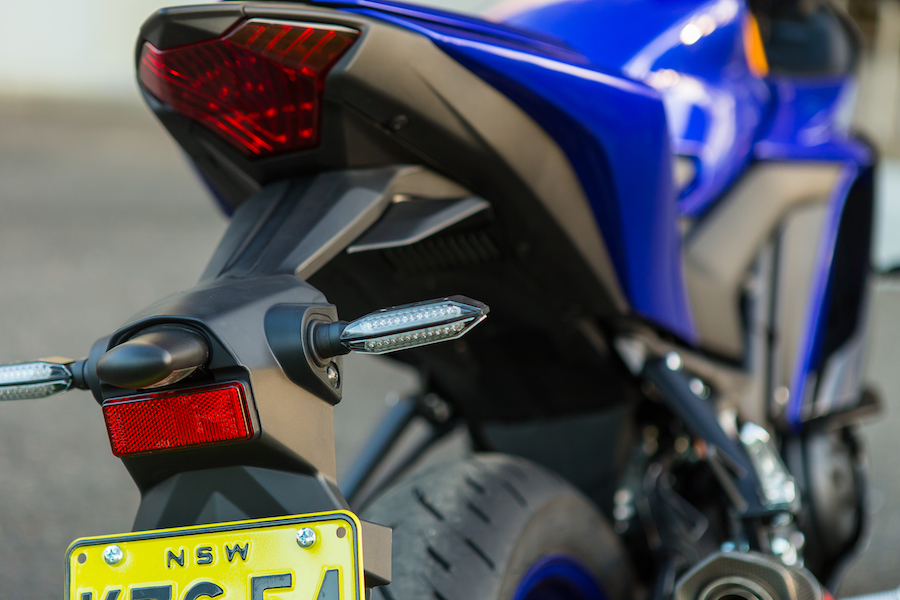 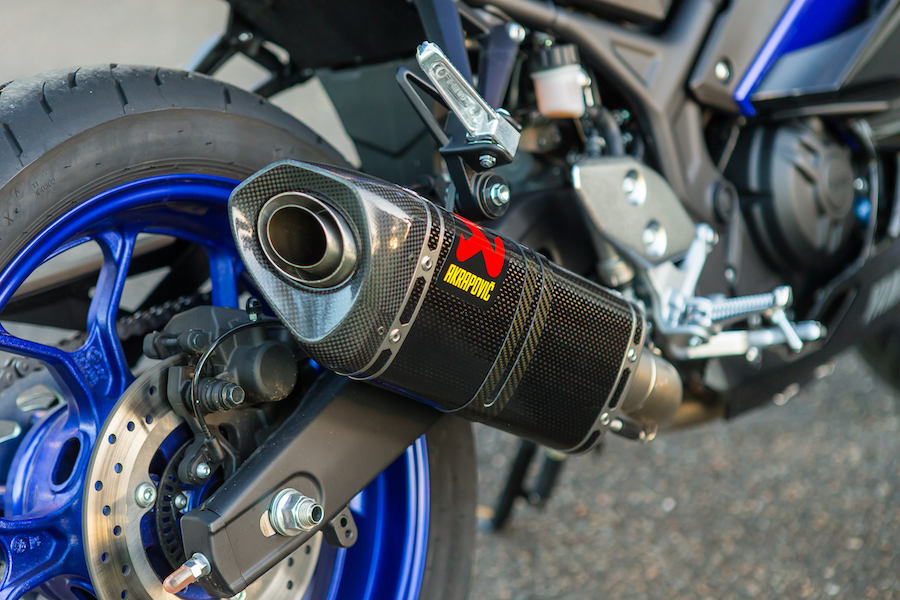 The rear suspension is updated for the 2019 model year, too, with a stiffer spring and preload adjustment. For my 87kg frame, it added even more stability to that rock-solid front end and played its part in keeping the bike both neutral and forgiving. As I started to ask more of the bike at higher speeds speed, it remained firm and predictable – exactly what the rear end of a LAMS bike should provide its rider.

Yamaha claims an even 50/50 weight distribution for the new YZF-R3, and that reads well into a corner where it again, just sits there as stable as you’d expect from a bike with a more accomplished specs panel. It’s when the road gets twisty and the speed gets rapid that it’s really apparent just how far above its weight this bike really punches. It’s not meant to be a touring bike, of course, however on the open road I didn’t feel as exposed as other small-capacity machines have made me feel over the years. It’s larger presence helps with that feel. It’s comfortable sitting on 100km/h and there’s still enough left in the engine to make overtaking a relatively trouble-free experience.

Redline is 14,000rpm, however peak horsepower (30.9kW @ 10,700rpm) is claimed around  9700rpm, while the all-important peak torque of nearly 27Nm chimes in at 9000rpm. With forged pistons to keep the weight down and the 180-degree crank, the engine is surprisingly strong for its 321cc capacity and with the revs kept high, it pulls hard through the smooth, six-speed gear box. Again, like the rest of the bike, the engine/gearbox combo is predictable and intuitive. 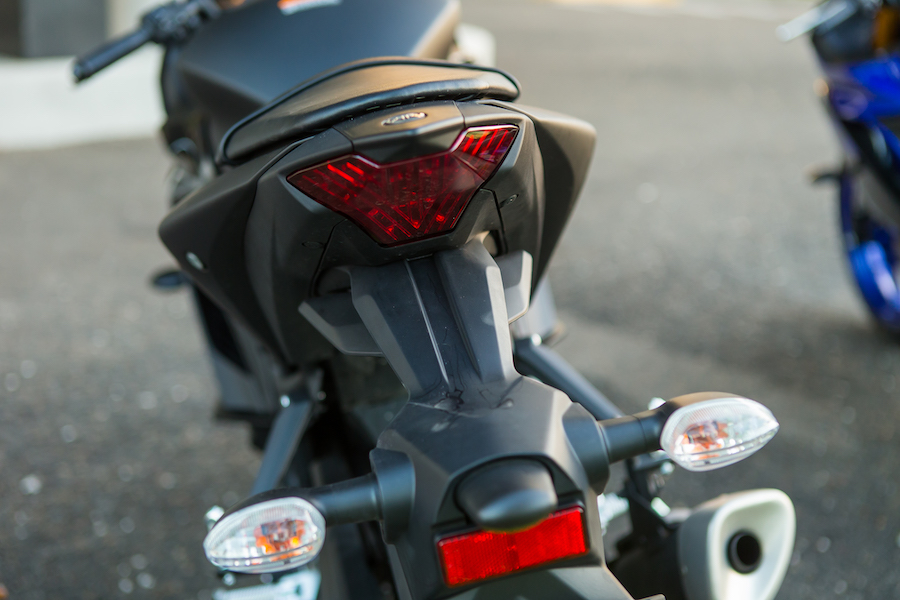 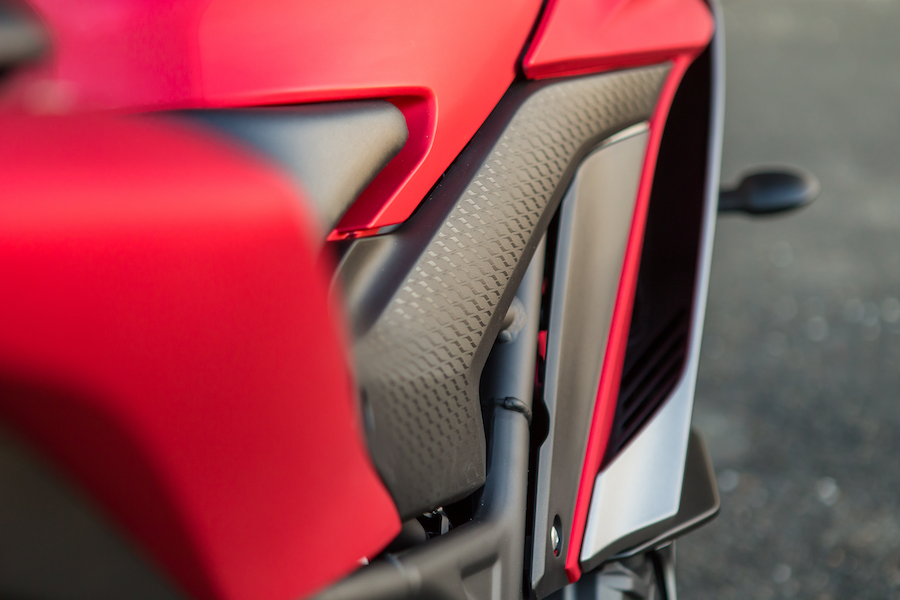 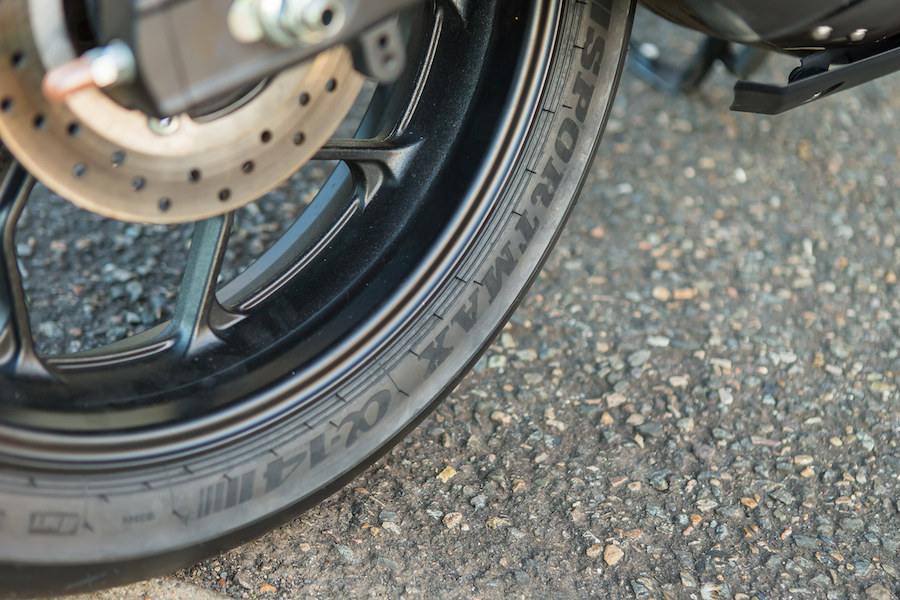 For its road-riding target market, the R3’s solid handling, predictable engine performance and a chassis that gives the LAMS demographic the perfect platform to learn and improve. It looks like a racebike, though, so the second day was always going to be interesting. How does a 321cc LAMS bike aimed fairly and squarely at an inexperienced commuter handle a relatively tight 1.4km circuit like Luddenham Raceway? Time to find out.

Given Yamaha’s involvement with the Junior R3 cup and the recently launched Oceania Cup road racing series here in Australia, I knew the R3 was going to have degree of capability on the track and with the standard bikes on hand, as well as fully set-up R3 Cup racebike, it was going to be interesting to see exactly where – and how big – the differences are. We were met at Luddenham by former world endurance racer turned Moto Stars director Damian Cudlin, who was running the day and there to answer any questions we might have. The older of the two Australian racing legend brothers has been working with young Australian racers through both the Oceania and R3 Cup series’ and knows a thing or two about these bikes.

Just like I was on the road, I’m immediately impressed by the feel I get back from this bike on the track – it’s very happy to be ridden quickly, and the fact that Yamaha has even let us out of pit lane on a LAMS commuter speaks volumes about the confidence the brand has in this thing. 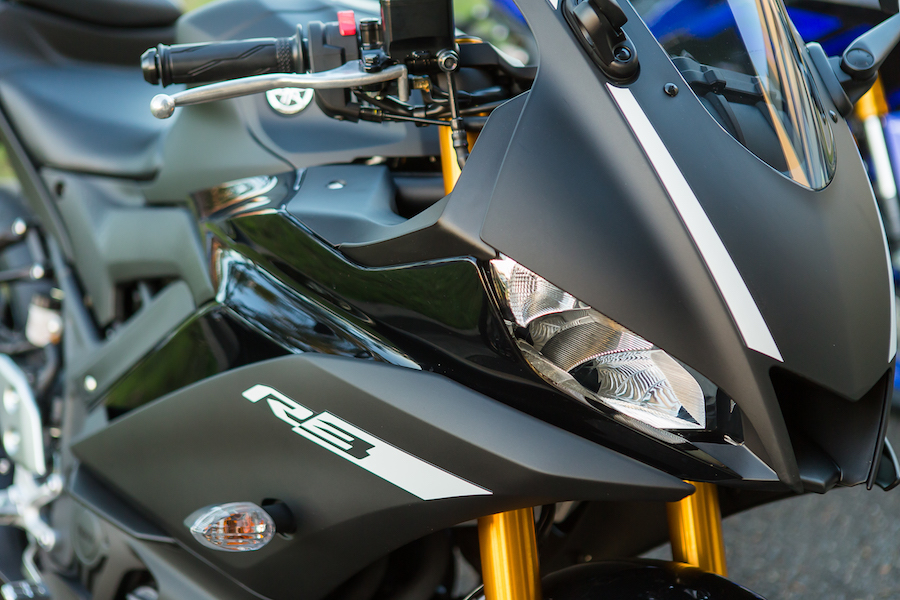 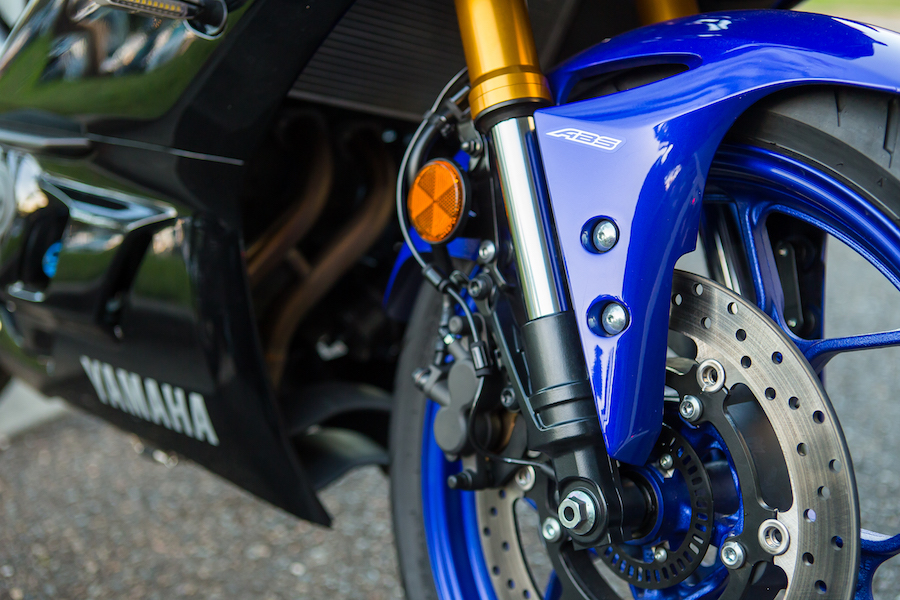 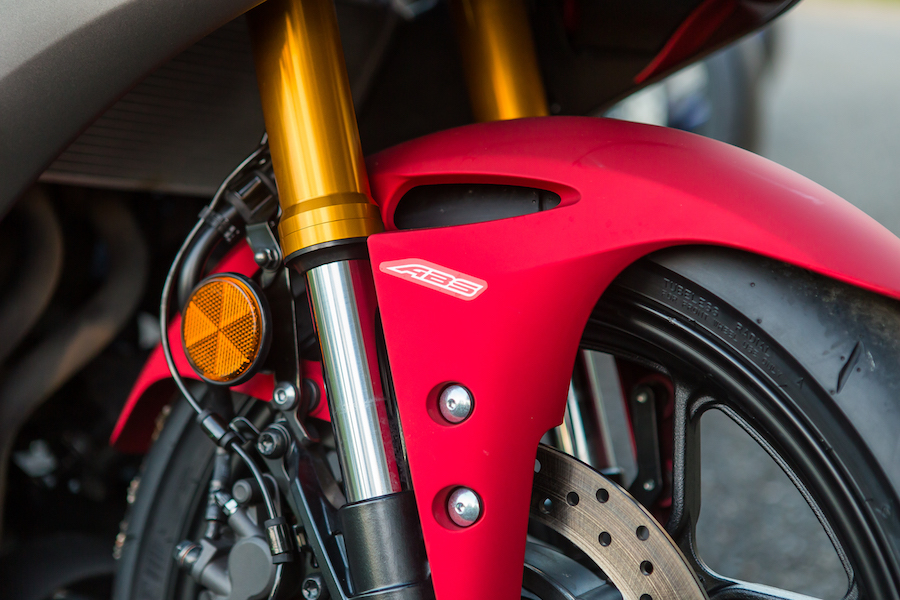 My favourite part of Luddenham is through the fast-right hander on the back straight – the bike gets light and loose as you bend it in, but that same confidence it holds on the road is there at this turn, too. You are pinned in fourth gear over the bumps that happen to be right on the apex of the turn, before the exit lets you squeeze everything you can from the engine, then it’s hard braking for a tight, downhill right hander.

The R3 remains so predictable through here, a lesser bike would tie itself in knots. For a close-to-standard motorcycle – whose only change was to switch out the standard Dunlop GPR300 road rubber for a set of softer Dunlop Alpha 14 hoops – it did it lap after lap, it was exceptional.

Engine-wise, I’m impressed by the smoothness and the torque from the small-capacity 321cc parallel-twin engine. The standard gearing is well matched to the six-speed gearbox for road use, though initially I was looking for the phantom seventh gear until I got used to the higher-revving characteristics. The ABS-equipped brakes at both ends were great on the road and showed no weaknesses on the track, either. The feel and power is the same the whole way across this bike – predictable, surprise-free and the harder you use them, the more capable they feel. It’s perfect LAMS fodder.

A couple of days on the YZF-R3 on both the road and track proved this bike suits a wide range of riders and skill levels. It can be used in so many situations and conditions without compromise. It looks great with the updated styling – said to improve the aerodynamic efficiency, to – and is a lot of fun to ride on both smooth and bumpy smooth roads. If you are looking for your first bike or you are a returning rider and want to have some serious fun riding a sportsbike, then the YZF-R3 is worth considering. Especially when you consider that despite its updates for the 2019 model year, its $6299 (plus on-road costs) price remains unchanged. In terms of its direct 300cc competition (see sidebar) it priced at the pointy end, but its build and ride quality means its easily justifiable and still represents excellent bang for buck.

Without hesitation I would recommend the new YZF-R3 to a brand-new new rider. And that’s a big call. The levers are non-adjustable, the exhaust note’s uninspiring and it’s only 200 bucks less expensive than the Ninja 400