THE FIRST LAP OF TASSIE | They did what?

When Reg Beauchamp and his mate Len Hyland first announced their intentions to ride around their home state on motorcycles, no one took much notice. For most Tasmanians, be they Cascade drinkers in the south or dastardly Boags imbibers up north, all civilisation was bounded by Hobart in the south, St Helens in the east, George Town in the north and Derwent Bridge in the west.

So when Reg insisted their intention was to ride the wild west through Queenstown, Strahan and Zeehan, the pair were dismissed as suicidal dreamers by all except Shell motor spirit, Castrol oil, Dunlop tyres and BBS spark-plugs, all of who hoped to get some press.

Reg on his 2.5hp BSA Standard and Len on his 3.5hp BSA Super, each loaded with 15kg backpacks, rolled out of Hobart early on 11 February 1928, refuelled at Ouse and had lunch at Derwent Bridge. Beyond there, they were assured, rabid packs of Tasmanian Tigers still roamed, all the natives had two heads and in what is now the Franklin-Gordon Wilderness area that 60 years later spawned the Greens Party, they forded the Little Navarre River and camped the night – already somewhat knackered according to Beauchamp.

Predictably it rained. As they were crossing the soggy button grass wetlands they were often bogged to their thighs while extricating their machines. As they ascended Mount Arrowsmith on a derelict bridal track, the rain became a horizontal torrent to the point they had to dewater the carburettors. They arrived on the eastern bank of the Franklin River to discover a surveyors encampment where they were taken in like lost waifs, given warm clothes, a tent, lunch and dinner.

Having spent an entire morning to add less than 10 miles (16km) to their odometers must have given the lads time to reflect, yet they spent a good part of the afternoon sliding the two machines across the raging Franklin River by means of a rudimentary flying fox.

An early start the next morning led to six hours scrambling through thick waterlogged bracken whilst scrambling up, over, around and under moss-covered logs. Another block and tackle cable effort over the Collingwood River, several ‘technical’ mountain creek crossings, more button grass and finally, as the cold darkness set in, the pair had covered 11 miles in 12 hours.

Machines which had become no more than an encumbrance, bogged to the hubs and magnetos every few yards in the high plains marsh, became impossibly awkward to manoeuvre across Victoria Pass – a rocky track little more than a foot wide with a sheer cliff face one side and a 1000-foot drop on the other.

A place so inhospitable in the fog it has never become a must-do for today’s most intrepid bushwalkers.

Despite being manhandled for much of the trek, one of the bikes ran out of fuel, actually making progress a little easier. Beauchamp and Hyland arrived in Queenstown just in time to cancel their own search party and, only a day later, after recovering the abandoned machine, set out on the second pioneering leg of their journey. The easy part, just follow the rail line.

Except they discovered the rail line spans no less than 21 elevated trestle bridges, a few narrow tunnels and many miles of track so steep as to require a central cog line.

It was the bridges that caused the most concern, as it became necessary to slide the bikes across on their crankcases. Beauchamp later reported, “on one bridge, a quarter-mile long curve, we met a rail gang on a trolley and had to move to one side to let them pass. It was very risky.”

Nonetheless it was also quick, they made it from Queenstown through Strahan and on to Zeehan in a single day. Their adventure did not end there, but the pair could no longer claim being the first as some years earlier, Fred Smithies and Herb King had ridden Indian Scouts along the Emu Bay rail line, south from Burnie in the north to Zeehan.

As you may imagine, the rest of Beauchamp and Hyland’s ride was relatively tame, however, they were the first riders to encircle the Apple Isle. 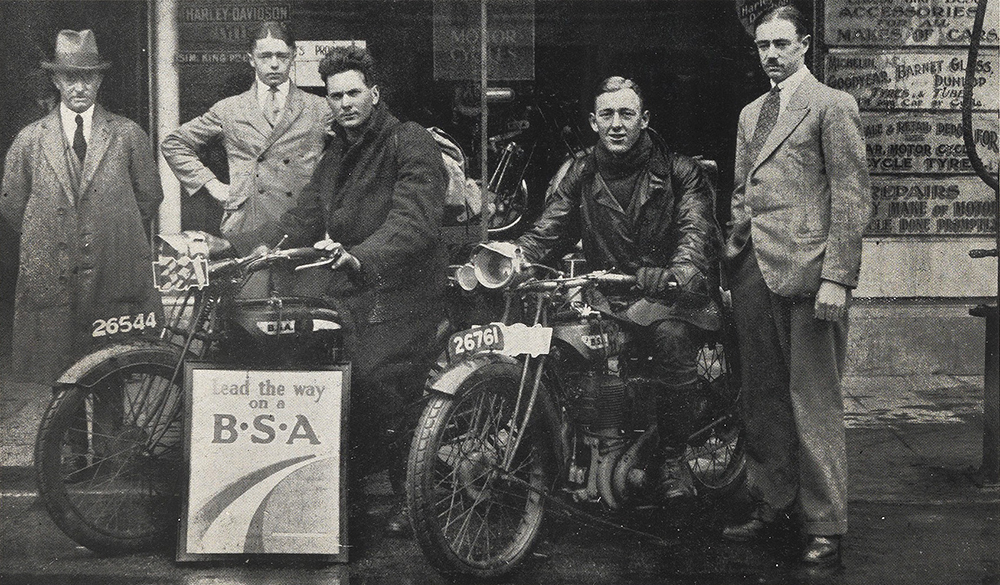