Why was 1992 a special year? Because Honda launched the CBR900RR Fireblade, of course – and the sports bike landscape changed forever. 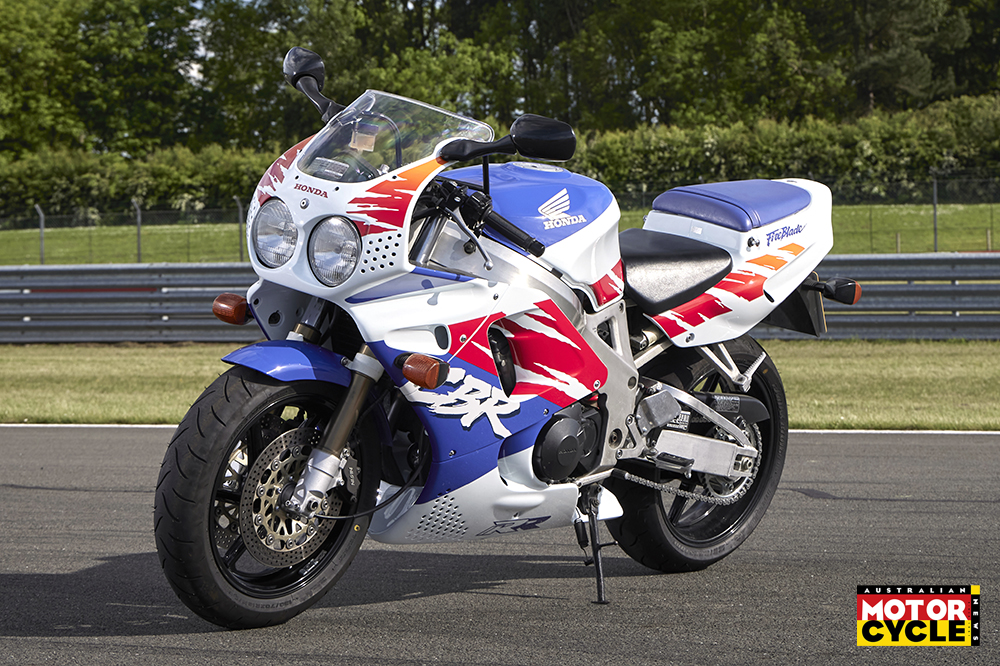 Like so many, I remember catching sight of a Blade in numerous magazines – its 16-inch front wheel hoisted joyfully in the air in most pictures – and later the thrill of seeing one for real on the street. Even then, I could tell that this machine redefined what a road-going superbike should be.

While the Japanese competition was searching for ever more power, producing bigger and heavier litre-plus bikes like the FZR1000 and GSX-R1100 as well as specialist 750s like the OW01 focused on World Superbike homologation, Honda chose a different path. 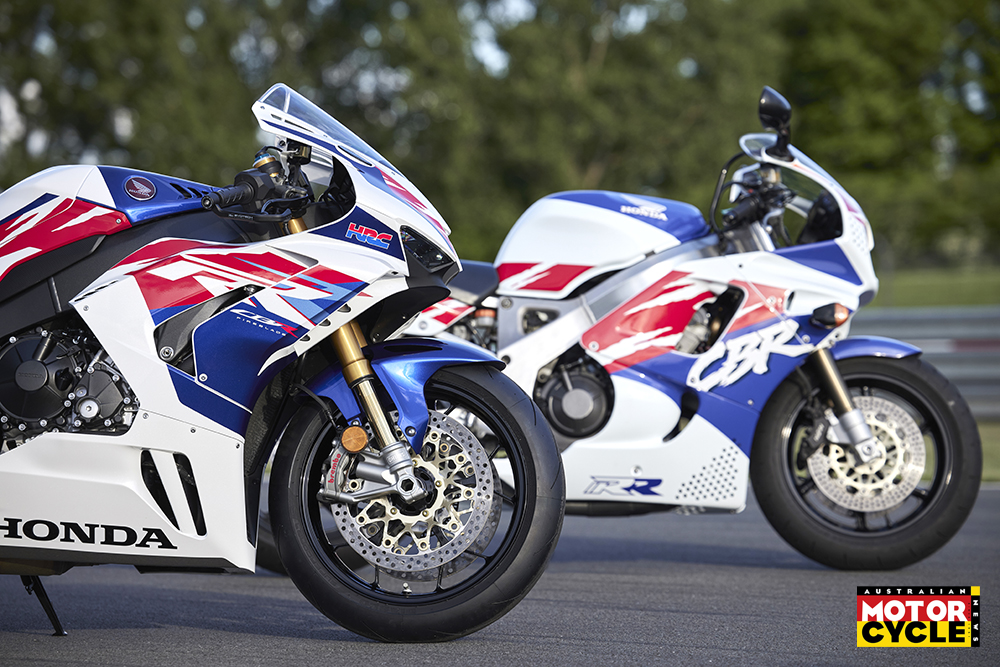 With lightness and real-world handling the key, the new Blade was designed for the road, to work in the corners, and relatively unconcerned with peak power and torque figures. Its 124bhp couldn’t match the output of the competition but it rang rings around them in the bends.

To celebrate, Honda announced a very special 30th Anniversary Fireblade, which features a ‘Tricolour’ paint scheme for the SP designed by Hiroaki Tsukui, who was also accountable for the original 1992 bike’s colours – the same design carried into the Isle of Man TT races earlier this month by Honda riders John McGuinness and Glenn Irwin. There is also a specially engraved Akrapovic silencer, an anniversary key fob and ‘ring of fire’ start-up graphic, plus a serial number bespoke to each bike etched into the top yoke. 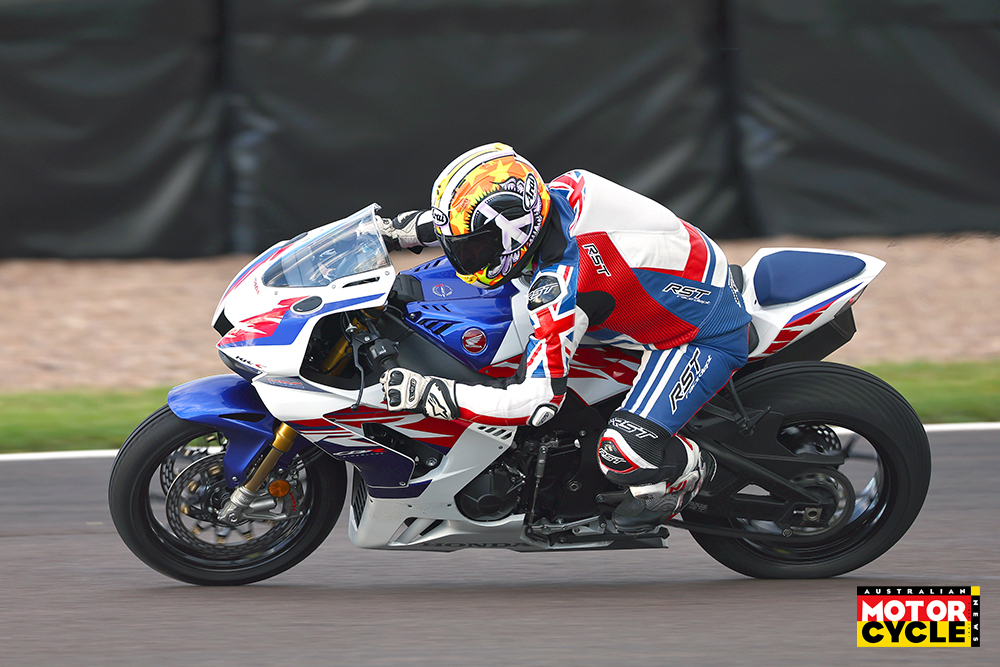 Honda has chosen this moment to make updates across the Fireblade range. There are still two models to choose from: the ‘standard’ CBR1000RR-R and the SP (now available in 30th Anniversary colours as well as the traditional Honda race colours of red, blue and white). The RR remains suspended on Showa big-piston forks and a BFRC Lite rear shock and runs Nissin radial brake calipers with updated pads for 2022, while the pricier SP version on test features semi-active Öhlins suspension and Brembos stoppers instead of Nissins. The SP also features a quick-shifter.

Honda hasn’t gone in search of more power – after all, 214.6 bhp/160kw is probably enough for most of us! – instead, the factory has concentrated on making the bike more usable, much as legendary project leader Tadao Baba did 30 years ago with the original Blade. There is improved mid-range power via a new airbox and intake funnels. Intake ports are narrower to boost airflow speed and produce more torque. The compression ratio has increased from 13.2:1 to 13.4:1 by skimming the head slightly. There’s also a new catalytic converter and a reshaped exhaust. 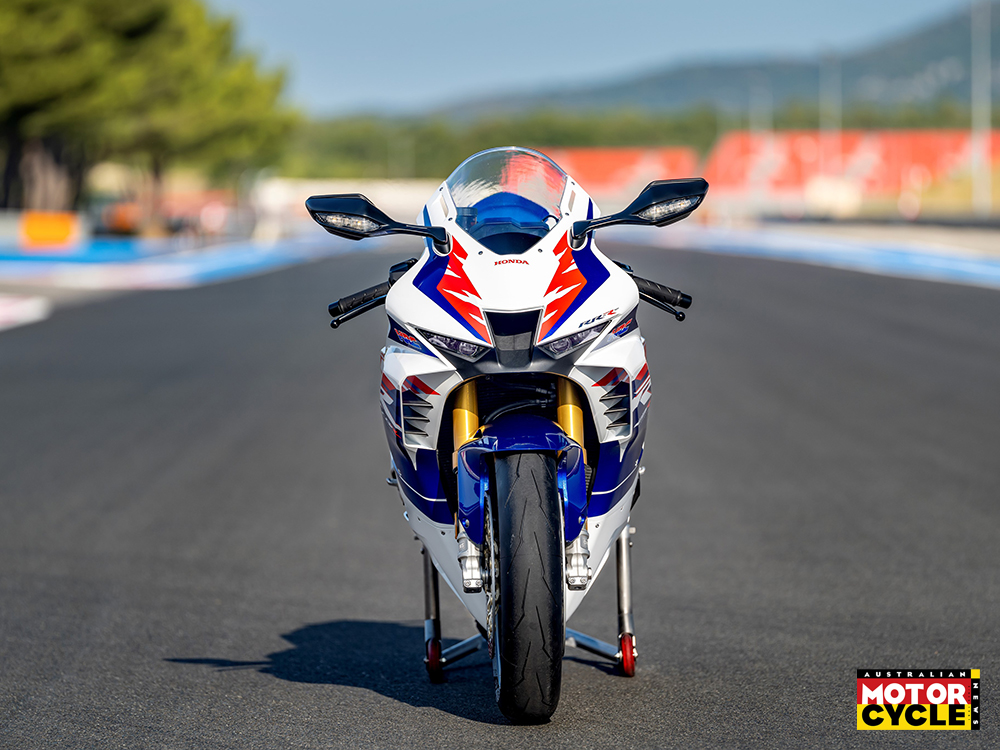 The simplest way to improve acceleration and give the sensation of more mid-range is to change the gearing, which is precisely what Honda has done. The original gearing was incredibly long, but now the rear sprocket size goes up from 40 teeth to 43. The wheelbase has increased slightly, up 5mm to 1460mm, probably to compensate for the longer chain and accommodate the larger rear sprocket.

Electronics have also been tweaked. The ride-by-wire throttle now has an easier action, while HSTC (traction control to us) has been revised to give a smoother reintervention.

The refreshed Blade is available in standard colours or the dramatic anniversary colours, which we have on test. We stepped out on a notoriously slippery Donington Park to feel the difference. 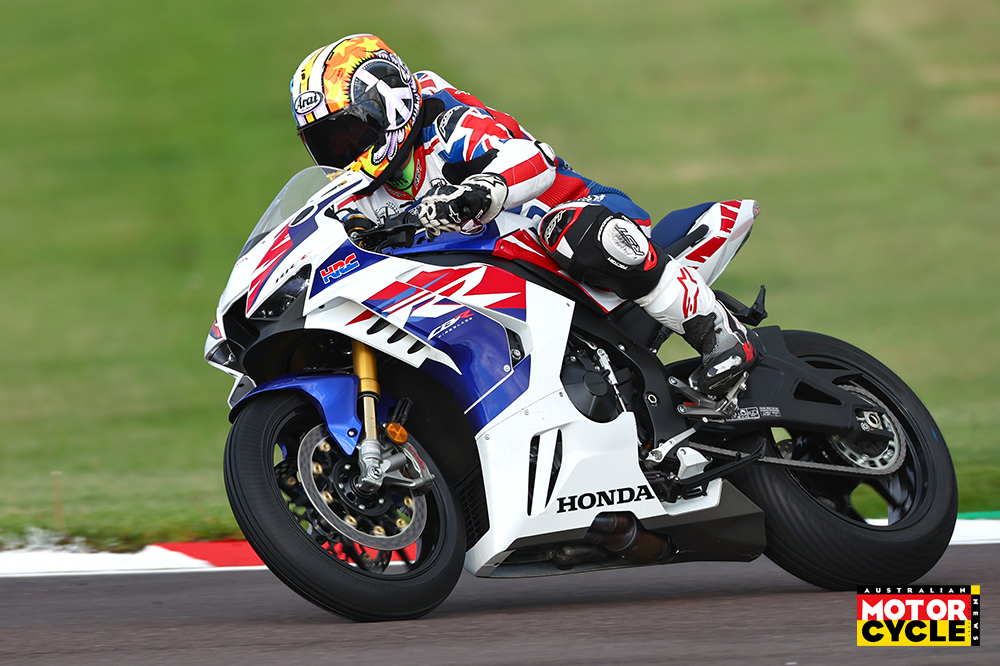 I’ve raced at Donnington many times – more so in the wet than dry, in fact – and know it is the slipperiest of UK tracks when it’s raining. Rolling down the pitlane on the 30th Anniversary Fireblade, its unique production number glinting in the top yoke… Yup, I felt a little bit apprehensive.

But I ran a Blade on road and trackdays last year and know how good the lean-sensitive rider aids are, so soon felt at home. 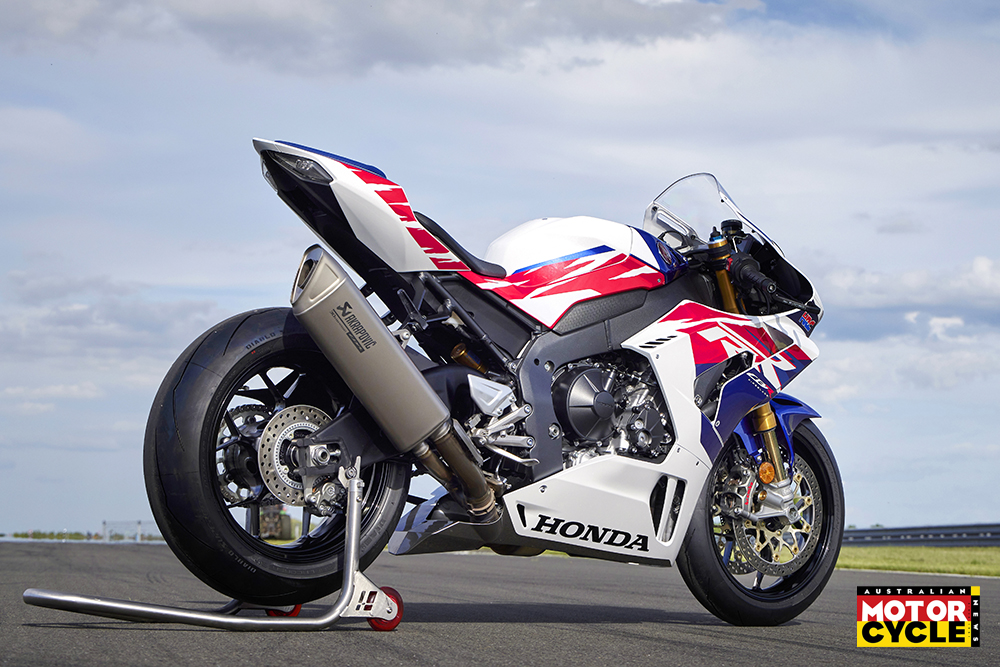 In normal conditions I would have been in first gear, using the top 25% of the revs, like I did on the 2021 bike. But in the tricky conditions, I’d automatically started short-shifting; using the bike’s new helpings of torque and lowered gearing as it pulled through the mid-range, driving hard towards the next smooth gear change, the revised quick-shifter fast and smooth, like a race bike.

Instead of using first gear in the slowest corners or dropping to second from third, then holding on to the lower gears using the older Blade’s top end rush, the 2022 Blade encouraged me to use a gear higher. In fact, at Donnington Park, I didn’t touch first gear all day aside from entering and leaving the pit lane. Things might have been different in perfect conditions, but in the damp the Blade was far easier to ride than a 215bhp superbike should be. 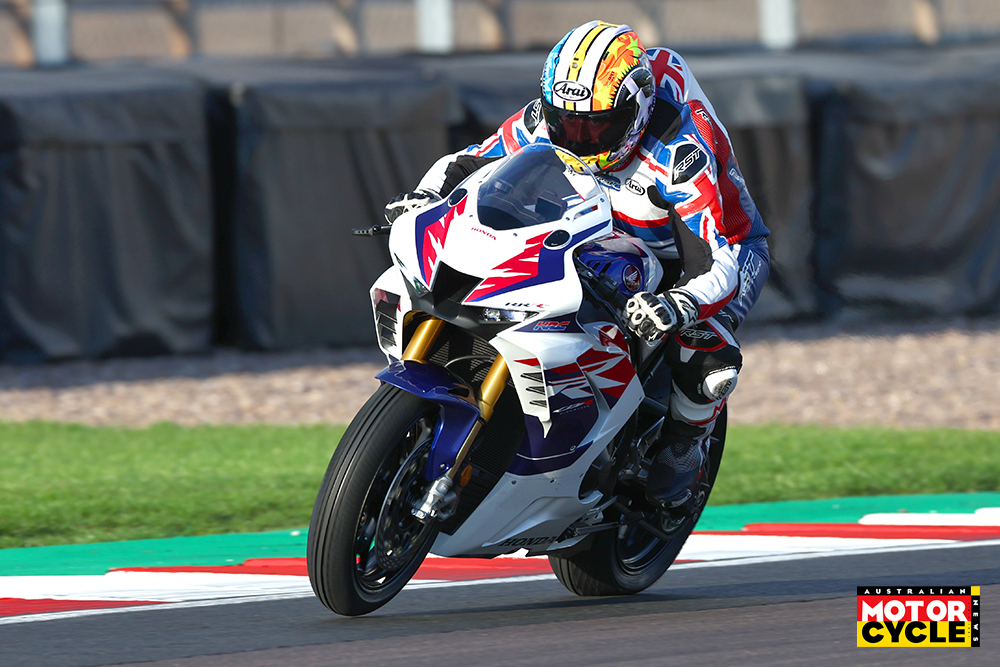 Some of this is down to the excellent electronics. Actually, we need to create a new superlative to describe the brilliance of the standard, lean-sensitive rider aids. Exiting Coppice, for example, an opening corner that leads onto the back straight and is an excellent test of any bike’s electronics, I was demanding more of the rear each lap as I exploited the new bike’s mid-range, accelerating harder each lap with ever more lean angle. In riding mode 2 (Sport) and with the HSTC set to 5, I could feel the traction control working. When I asked for full power, the Blade held me back, depending on lean angle and conditions. When I pushed the bike upright, holding a constant but lighter throttle, the Blade accelerated harder. 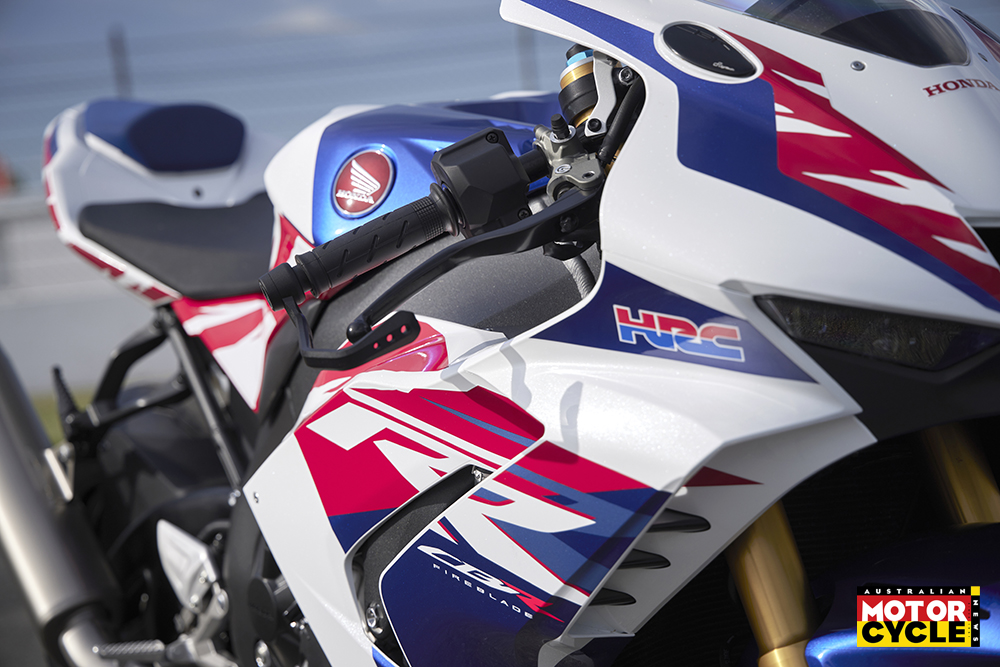 It’s a superb system. Mess up, miss the apex, add lean and the Blade once again takes over, giving you less power. There isn’t any misfiring or backfiring; it simply limits the power to control the slide. You ask for 200bhp, and it gives you 150bhp or whatever it thinks is right. 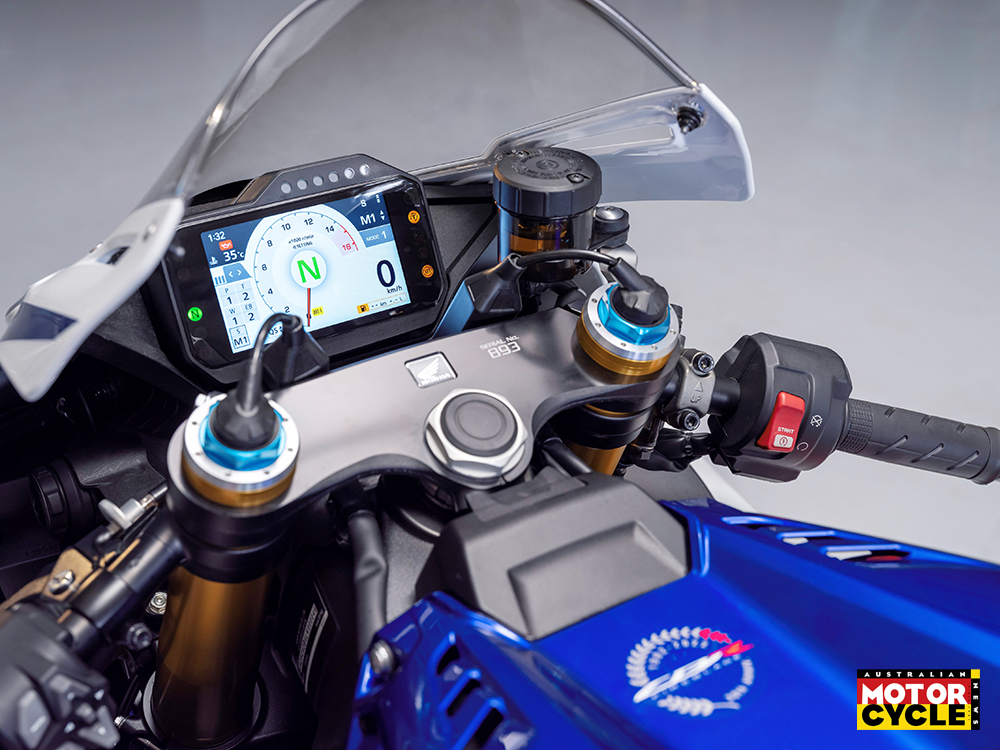 If you’re unfortunate enough to hit a wet patch or kerb, the rider aids quickly flick into overtime to control the sudden slide. Several times I felt the rear spin momentarily but, before I could close the throttle, the electronics had taken over, reduced the power and then allowed rapid acceleration with smooth reintervention. 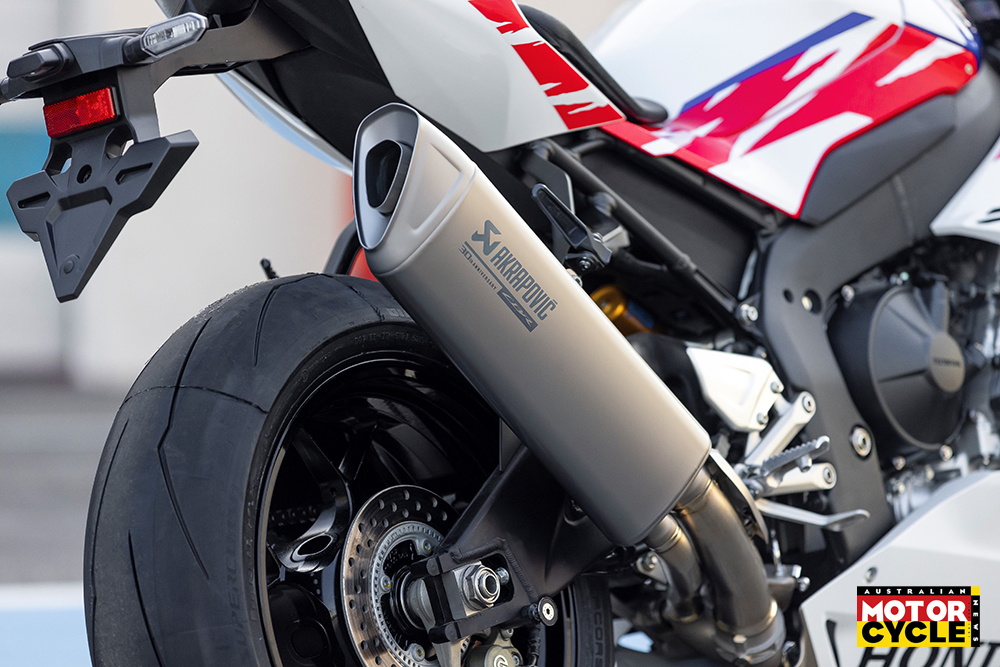 So effective and well-integrated are the electronics that I was actually thankful of the tricky conditions, which allowed me to push and test the rider aids with confidence. It’s not often you can say that a ride on a 200 bhp-plus beast on the slickest track in the UK in horrible weather was truly enjoyable, but it was. And that was mainly down to the excellent electronics working so well the chassis.

And while this was a track-only test, the improvements should transfer to the road. Lowered gearing is a trick many have used previously, and more torque, more mid-range, a smoother and lighter throttle action, and improved rider aids will all benefit the rider on the road.

But, for most, and I have to say this is very much the case for me, the best improvement is new 30th Anniversary Fireblade colour scheme, which for those of a certain age, is wonderfully evocative – those refinements the mid-range and electronics just an added and very welcome bonus. 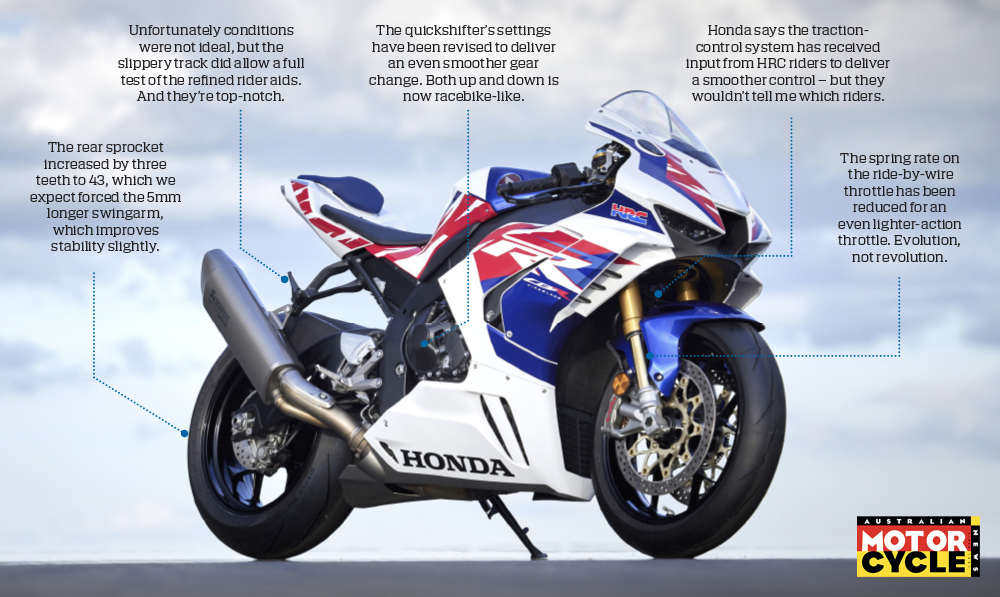 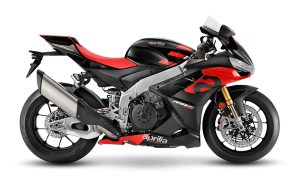 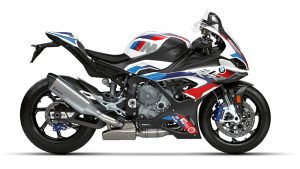 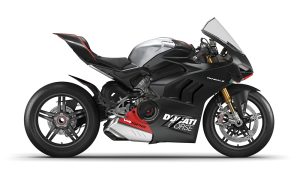