Kel takes the brand new, tech savvy 2022 CFMoto 300SR for a quick spin and puts the entry level machine through its paces.

The lairy colour scheme of the 2022 CFMoto 300SR may not be your bag, but it’s hard to argue the value the updated LAMS-approved sportsbike represents

When I was chomping at the bit to get my first bike, I remember the conversations with my dad pretty clearly. The crux of them was that I wanted something that looked good, and he wanted me to have a bit more patience, save a bit extra and buy something that was going to reliable and safe. 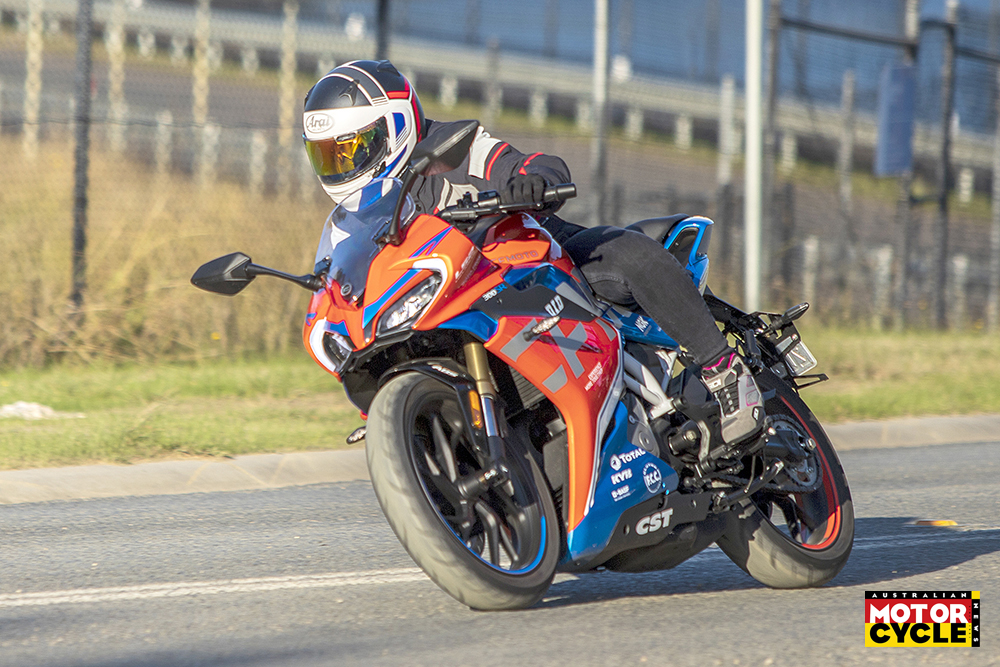 Excellent advice now, of course, looking at it through eyes which are 25 years older than they were then. But at the time I was impatient and frustrated. And with no wheels, also stuck at home with none of the freedoms that came with motorcycle learner’s permit that I’d finally received.

My first bike wasn’t cool, far from it. Nor was it learner legal (though that’s another story for another day), but it had a good service history, had a really manageable weight and power delivery and, being from a well-established brand name, it was reliable. I had my freedoms and my old man was satisfied that the bike would always get me home. 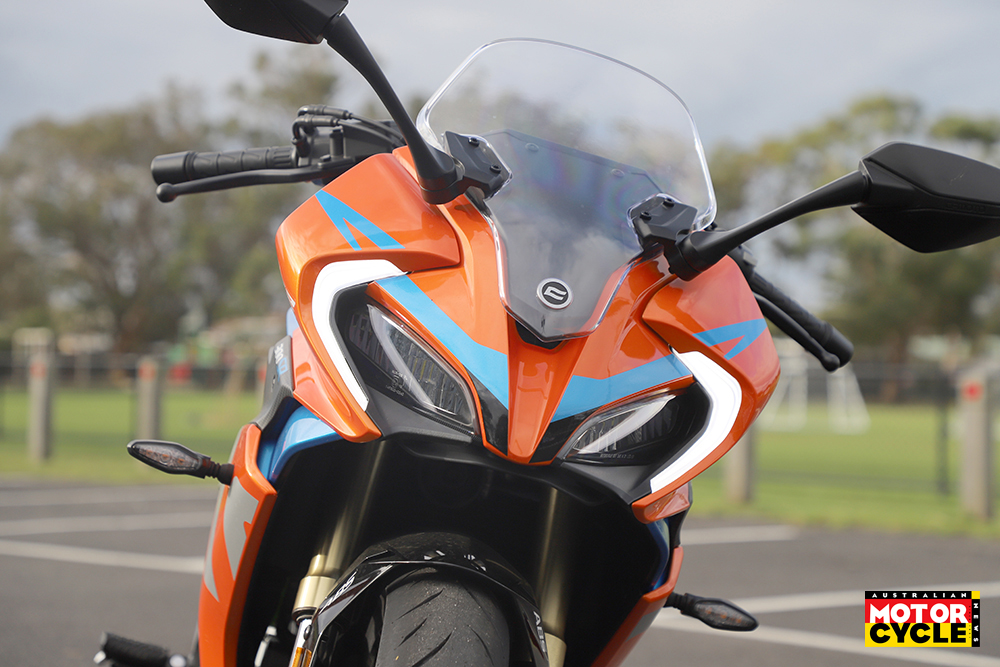 I suspect the $6290 (ride away) asking price of the 2022 CFMoto 300SR isn’t the sort of money many learners are throwing at a first bike. But in today’s money, it actually isn’t that much more than what I paid for my first motorcycle in the late-1990s, and it’s got a list of features any dad would jump at.

And when you compare it to another fully-faired 300cc single in the form of Yamaha’s current-model YZF-R3, which is nearly $2000 more expensive than the CFMoto, you’re getting more features and more tech, as well as an extra year’s warranty. It’s a pretty compelling argument. 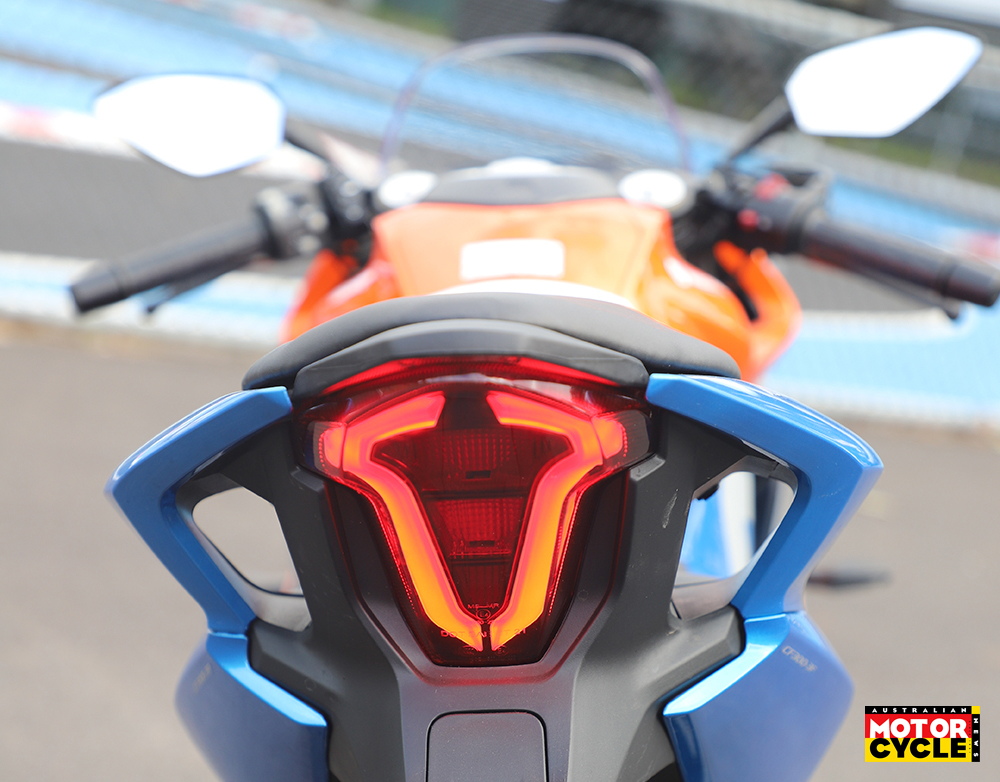 There’s been a few updates to the 2022 CFMoto 300SR and ride quality is better than I remember the old model to be. Although the list of changes doesn’t mention it, the suspension doesn’t feel as soft as the last one, and the fuelling via the Bosch fuel-injection system feels far more precise. The last point may or may not have something to do with the fact that the latest model is now Euro 5 compliant, however there’s no detail on how it was achieved. But small throttle inputs, especially higher in the rev range, feel for more accurate and consequential than the outgoing version.

The most significant update – for a teenaged learner rider, anyway – is the flash new full-colour five-inch TFT screen with phone connectivity and turn-by-turn navigation. Okay, so the phone connectivity function which facilitates phone calls and messages may not impress a dad whose teenager is easily distracted by screens, but the ability to plug in an address and allow a new rider to confidently follow simple turn-by-turn directions will. It means less time worrying about where they’re going and more time concentrating on the road ahead and the vehicles around them. 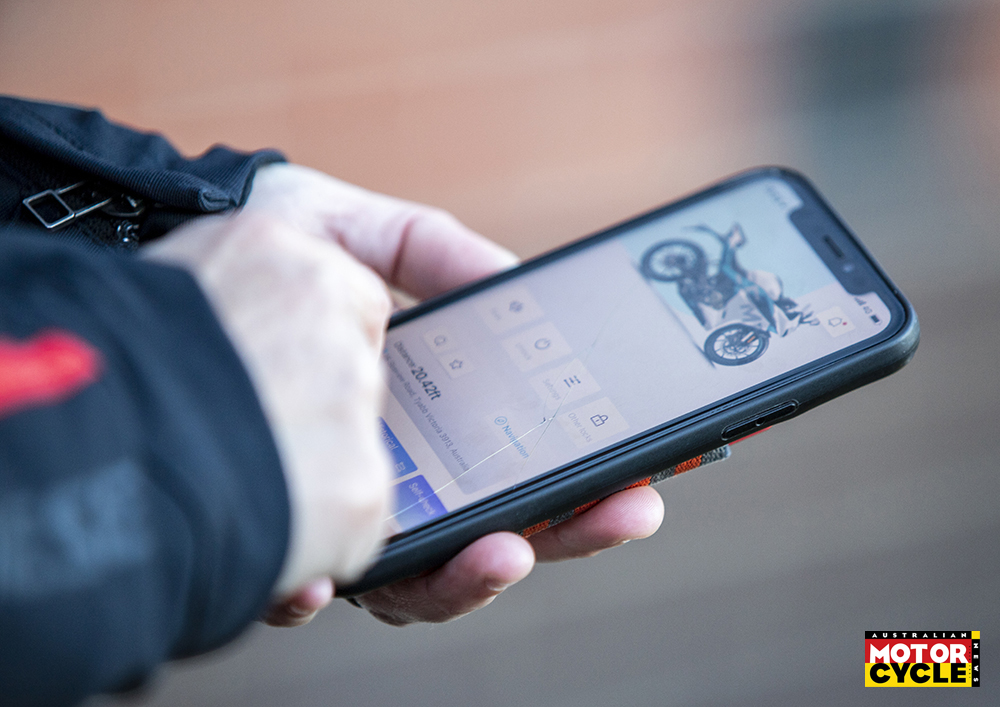 It’s simple to use, too. You download the CFMoto Ride app, pair it with your machine by inputting the bike’s VIN, then plug your desired address in via your phone. Once you’ve chosen your preferred route, put your phone in your pocket and the let the dash takeover.

A lot of the time, built-in navigation systems are too complex for their own good, not so this system, with just a direction arrow and the distance to the street you’re turning into appearing on the large clear five-inch dash. The app will also let you know how much fuel you have left, your bike’s total milage and battery voltage.

At 165kg (wet) and with a seat height of 780mm, there’s nothing intimidating about the brightly coloured sportsbike. Nor is there anything intimidating about the 21kW (29hp) of power and 25.3Nm of torque available from the 292.4cc single-cylinder engine. The first gear is ridiculously short, making your very first impressions of the bike a lacklustre one, but I reckon it’s geared that way to make it nearly impossible to stall as a way to build confidence for learners. It makes the new-for-2022 slipper clutch all the more viable too. Not that you’d find yourself ever needing to shift down to first – it’s so short that second-gear is more than appropriate for all slow-speed applications, but a slipper clutch will be very handy if you happen to grab first gear while still carrying a bit of speed. 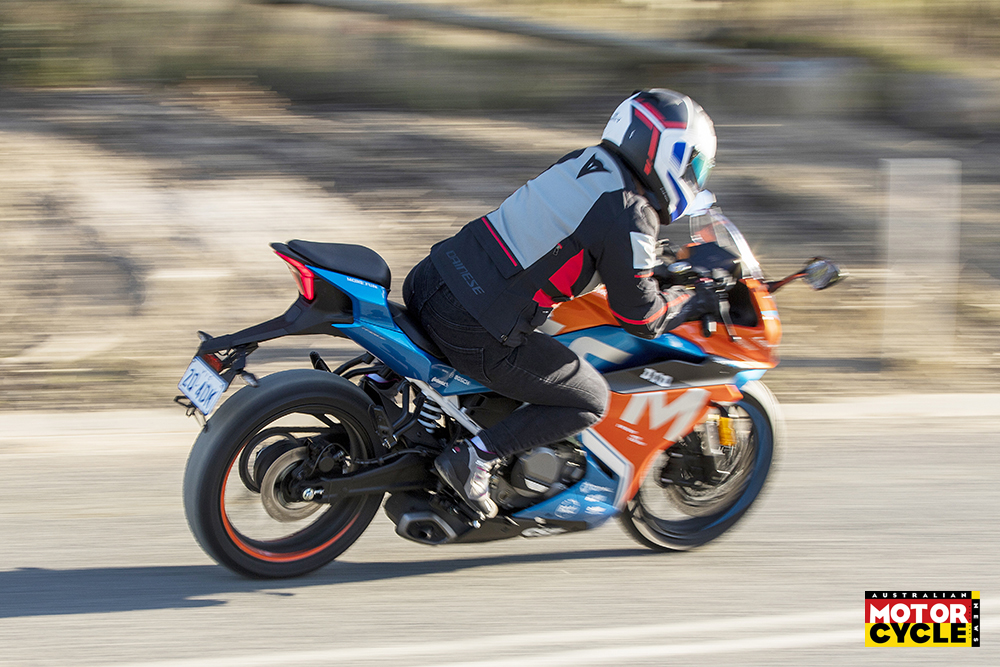 The Continental ABS system is carried over from the previous model, as per Euro 5 regulations, and on such a light bike, the single-disc front end has no worries at all washing off speed, especially when combined with the rear. The front and rear J.Juan calipers are good quality, though the ABS system is a little crude in that I did manage to get the wheels to lock ever so briefly before the electronics took over and released things. But it was on really loose dirt and I was trying hard to trick it.

The standard tyres are grippier than their CST branding suggests. They came up to temperature quickly enough and provided more than enough confidence and feedback for the sort of riding this bike’s designed to do. And despite it looking like a factory-supported WorldSSP 300 racer, the high-mounted handlebars, roomy seat and rationally placed footpegs, makes this narrow sportsbike a very handy commuter, too. The mirrors large and practical and without any of the blinding vibrations associated with a single. 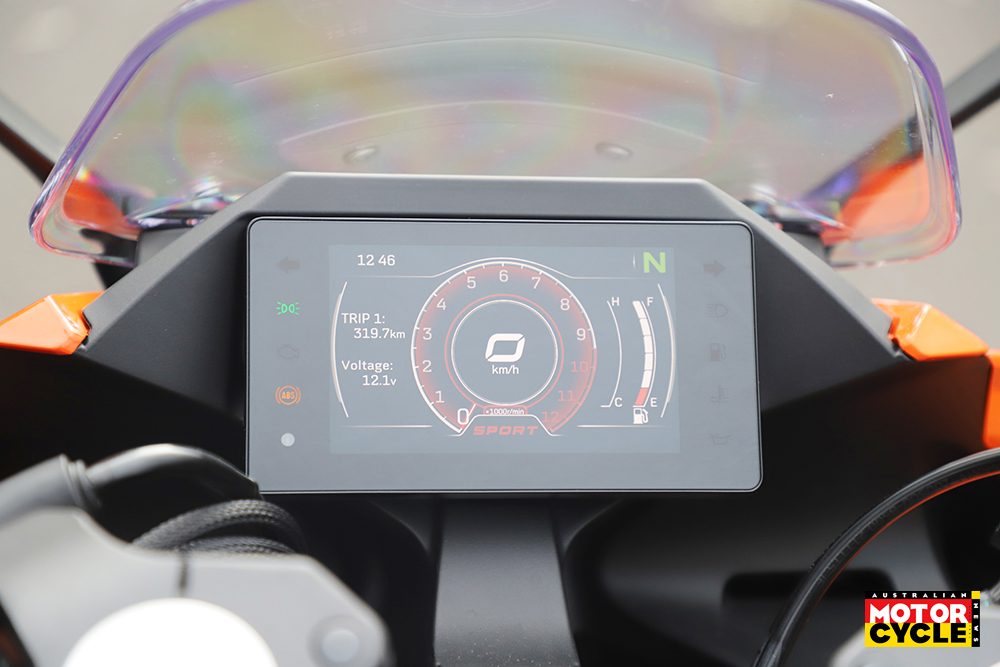 While there are switchable modes, I’m almost certain they apply only to the layout of the fancy dash, because there’s not discernible difference in the power delivery or throttle response. Nor do those sort of performance figures need a so-called eco mode – not with a fuel consumption figure of just over 3L/100km, which is a slight improvement over the outgoing model thanks to cleaner fuelling associated with the new Euro 5 compliance.

In any case, select Sport mode and the dash shows a circular tacho with the speed readout in the centre, whereas Eco mode relegates the tacho to the left-hand side of the screen, retains the speed readout but brings in other info such as the trip metre into the centre. Gear selector indicator, fuel gauge, clock and engine temperature gauge remain regardless of what mode you’re in. The final update for 2022 is the ignition key now features internal teeth rather than external ones like your front door, which CFMoto says improves security. 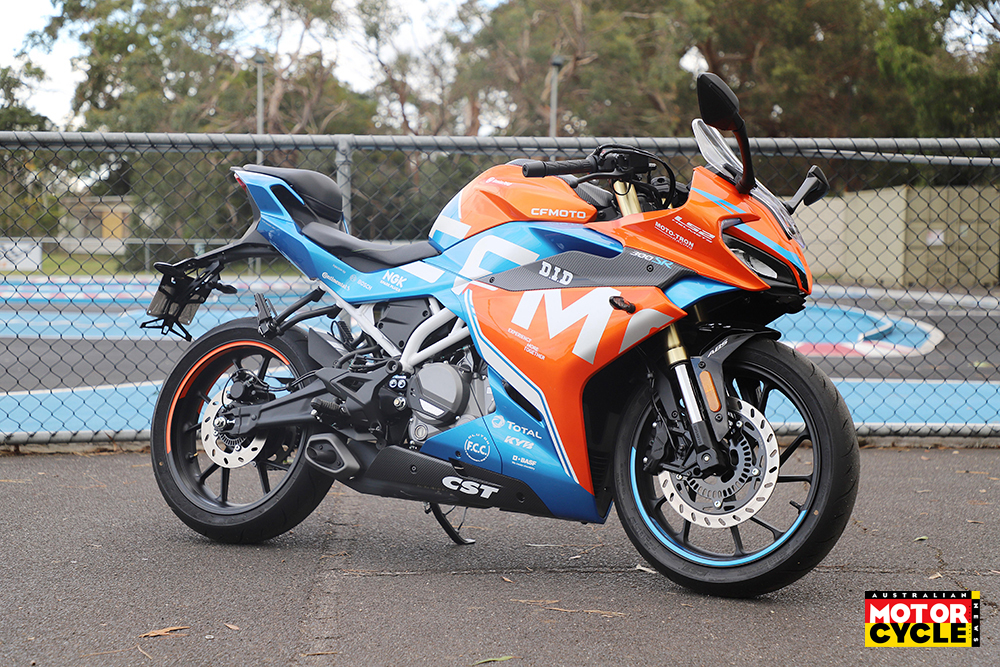 The lairy colour scheme isn’t for everyone – dads will like that you’re easy to see – but you can’t argue that it’s not bold and executed pretty convincingly. I reckon the overall styling is spot on with its Panigale-esque silouhette, trick underslung exhaust and with air ducts running through the rear seat unit. There’s a more subtle grey/black version that recently been announced that may appeal to more people. It has fluro-red highlights on the wheels fairing and tail.

But whichever way you look at it, when you compare its features and price to other single-cylinder sportsbikes on the market, it represents bloody good value. And maybe enough to justify a brand-new one as sensible first-bike purchase.