Triumph is making some bold claims, confidently predicting that its new Speed Triple 1200 RR will be ‘the most exhilarating Speed Triple ever’ and ‘the ultimate sportsbike for the road’.

Based around the firm’s Speed Triple RS, underneath its café racer cockpit fairing and dashes of carbon fibre, there is different suspension – now Öhlins Smart EC 2.0 electronically adjustable semi-active units – and new Pirelli Diablo Supercorsa SP V3 rubber. The rider is moved forward in the chassis, behind that charismatic single round headlight, with a slightly longer reach to the ’bar. 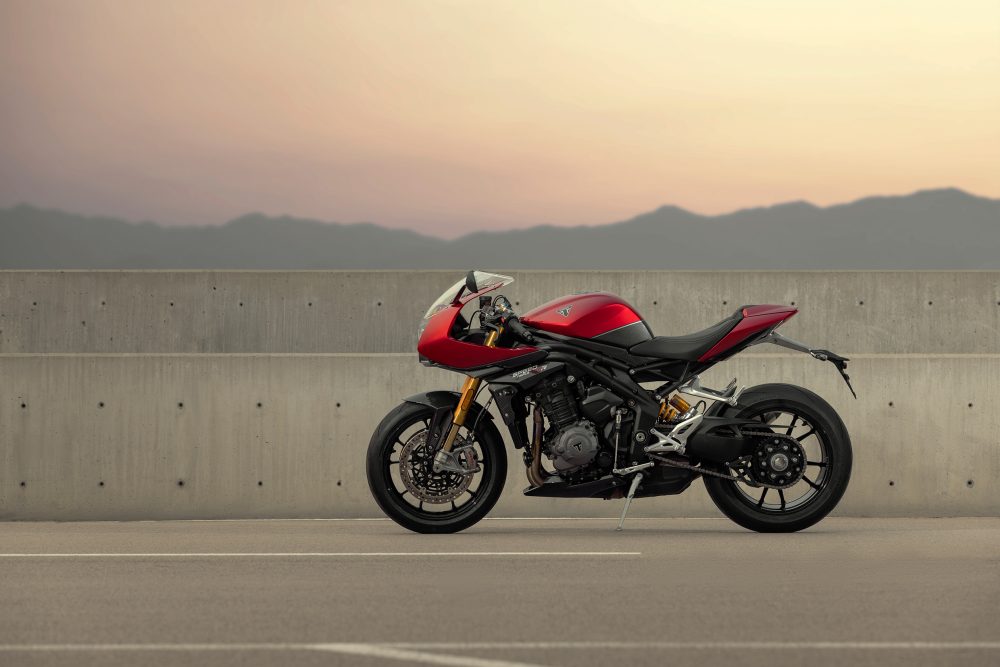 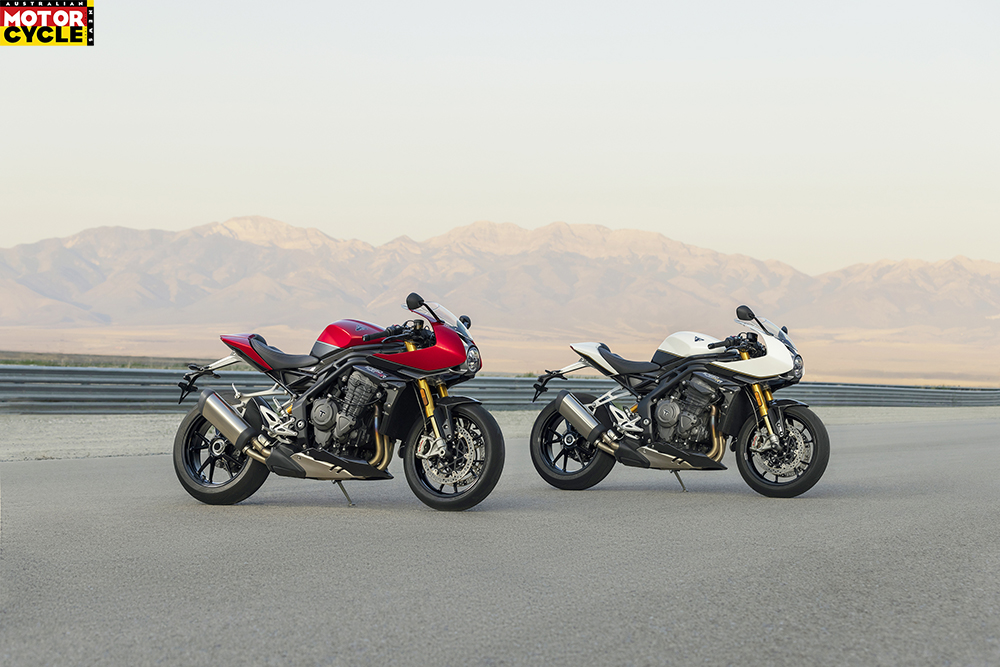 Triumph reckons this isn’t just a Speed Triple with clip-ons, but a modern café racer. And to help prove its point, let us loose on some of southern Spain’s breathtaking roads, followed by an afternoon around the 5.5km Ascari racetrack. 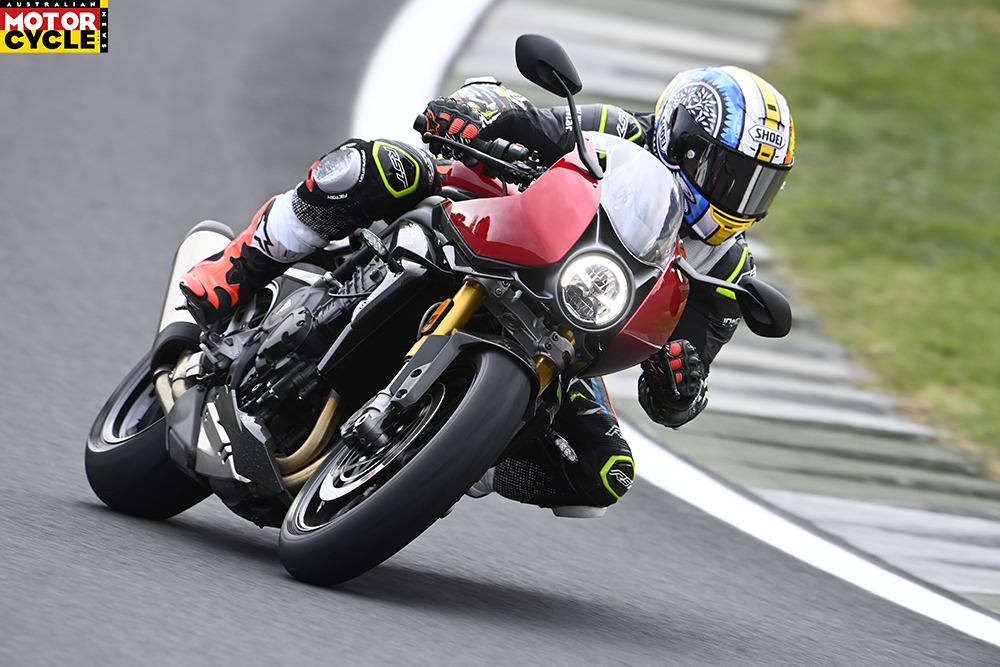 Looks are subjective, but in the chilly early-morning Spanish sunlight, the RR looks beautiful. It’s the first time I’ve had the chance to get close to the café racer, and I’m not disappointed. The single headlight strikes just the right note, and the lines of the RR flow to the rear-end as if it was always designed to be a café racer rather than a naked with a top fairing bolted on. The dashes of carbon fibre are a nice touch and help reduce weight (despite the added bodywork, Triumph claims the RR weighs the same as the naked 1200 RS). The deep red paint has a high level of finish but will set you back an extra $400. 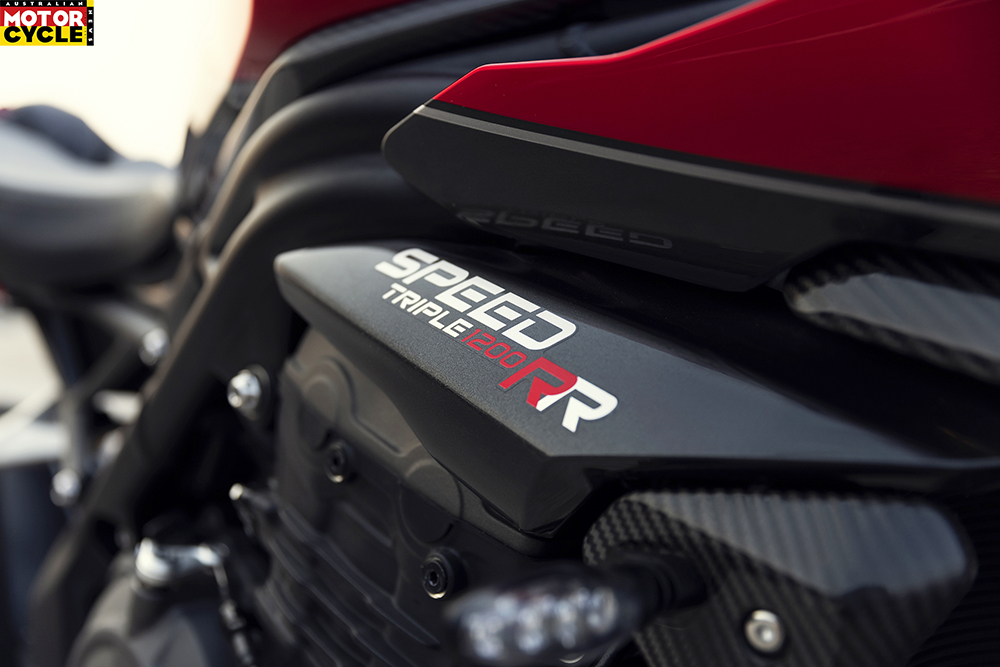 The charismatic triple engine remains unchanged, with no tweaks to the exhaust, its routing or the airbox, which means it sounds like the 1200 RS. Gorgeous, basically. Blipping the fly-by-wire throttle gets the digital rev counter dancing and the triple’s music echoes around the place, making me wonder how the Hinckley factory manage to attain Euro 5 certification when other manufacturers continue to roll out muted roadbikes.

We were forced to delay our test ride for a few hours because it was too icy but as the temperature rose just above freezing it was time to get a flavour of the new Triumph. Thankfully, Triumph had been kind enough to add the optional heated grips.

I mention the early morning freeze as the temperature was too low for the Pirelli Supercorsa SP V3 rubber to shine, and combined with the suspension set to ‘comfort’ the 1200 RR initially felt slow to steer. However, as the temperature began to climb, and the road began to flow, I soon realised that Comfort mode on the suspension means just that: soft and comfortable, not sporty at all. In Road and Rain mode, the suspension automatically reverts to a comfort mode setting, which, yes, blunts the steering slightly, but does produce a lovely, plush ride. 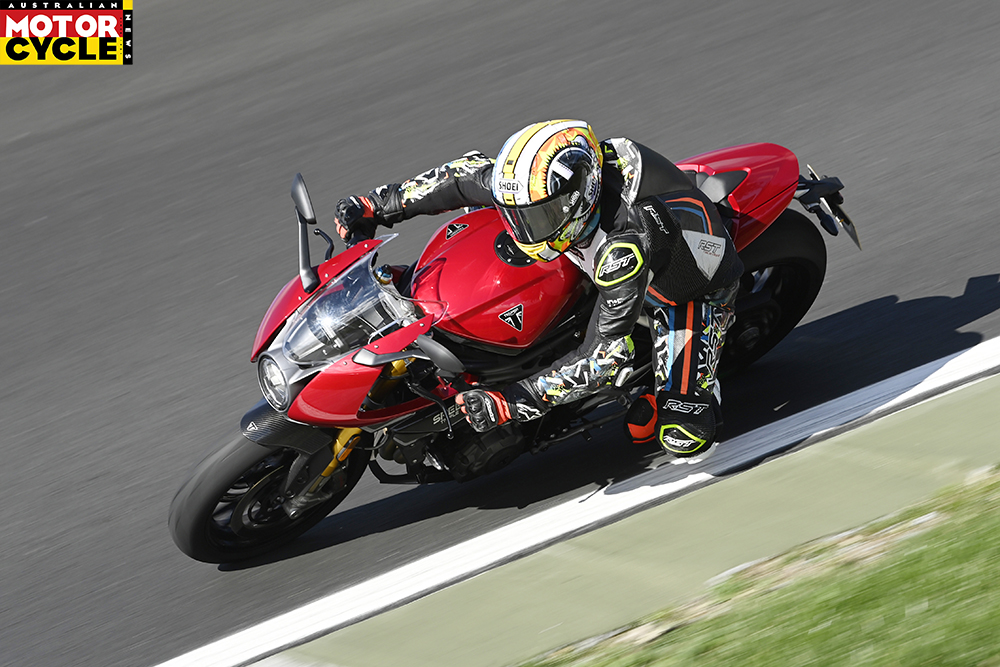 But flick it into Sport mode and the 1200 RR changes its character. The suspension stiffens, the chassis has more hold and the steering is sharper and more accurate, which in turn adds confidence and allows you to hit the road a little harder. There’s a notable difference between the riding modes, especially the reaction and movement of the semi-active suspension, and even riders less experienced in the nuances of modern electronics will appreciate the significant step in suspension feedback and feel. 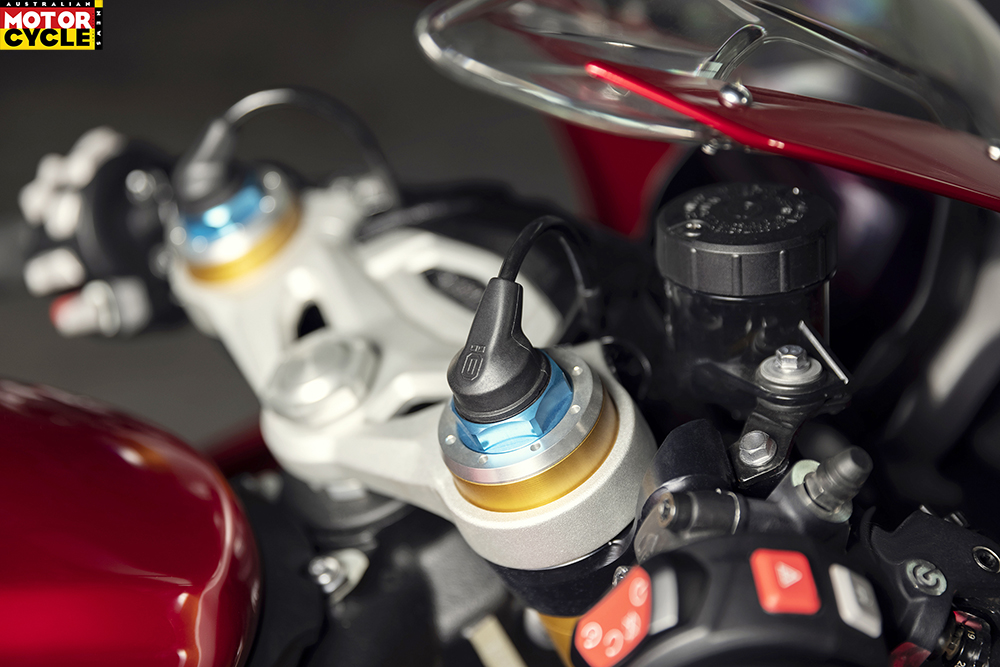 With heat in the track-ready Pirellis, the RR is in its element, gracefully flowing up and down the mountain passes. The new riding position feels more natural than the 1200 RS; you’re more over the fuel tank and dialled in to the chassis and feel encouraged to move your body position, lean into corners – knee slider searching for Spanish tarmac. 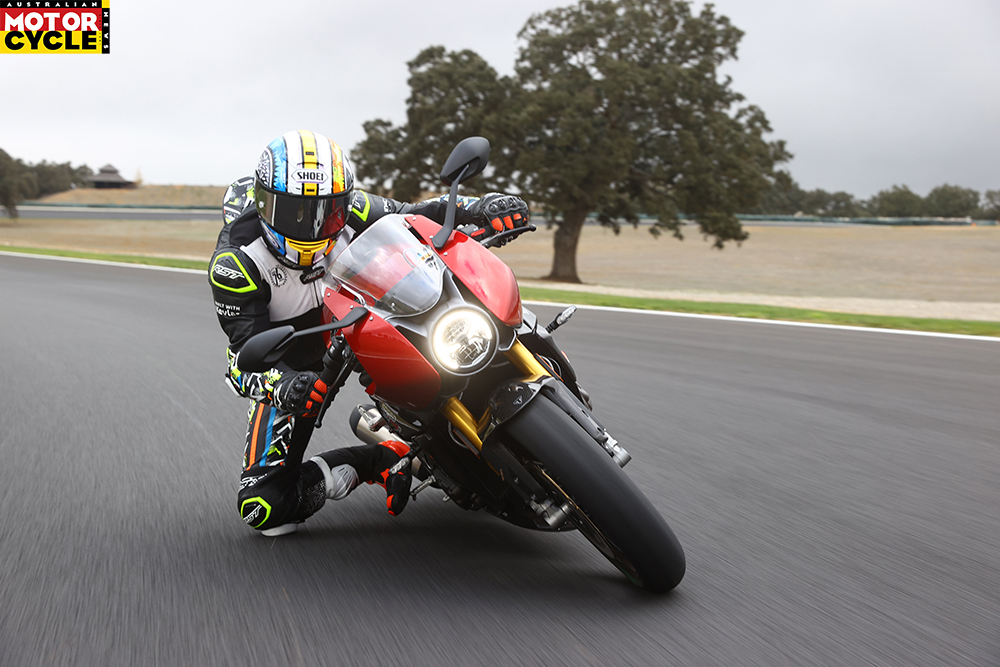 At this point, I’m agreeing with Triumph; it really has made an excellent roadbike. The chassis isn’t too radical, ergonomics are sporty but not extreme, and the handling is predictable and stable. And accompanying me on the ride is that stunning British triple, which so loves to bark. 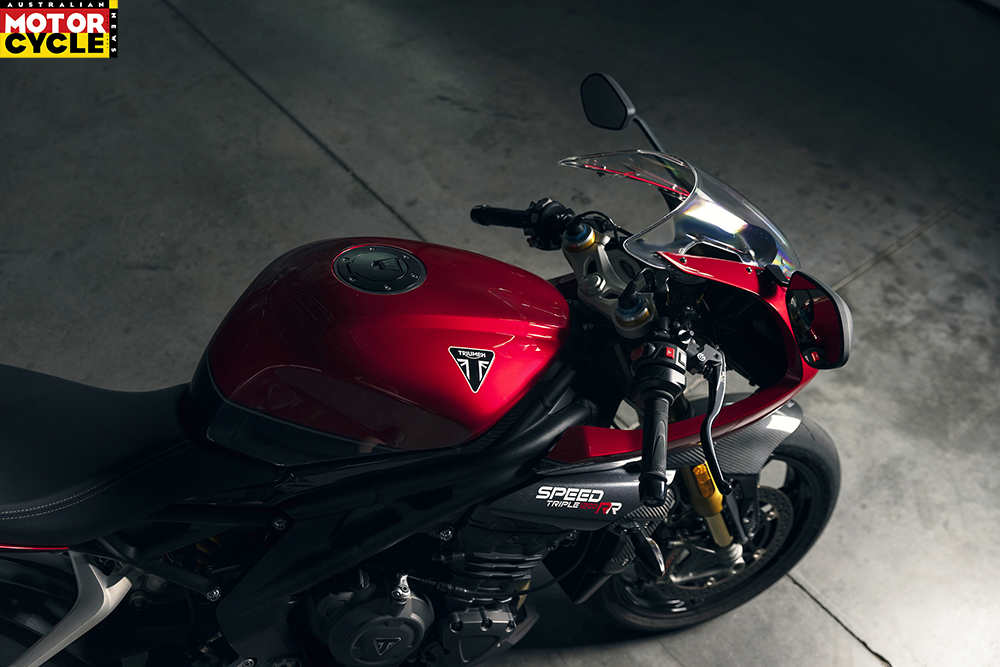 Its torque output puts most 200hp-plus sportsbikes to shame, and even out-grunts the new Ducati Panigale V4. For the majority of the time you can just play with fourth and fifth gears, you don’t need to dance up and down the standard two-way quickshifter. Okay, from time to time it’s rewarding to have a blast, without the clutch, kick back a few gears and get the wheelie control working overtime, but for the majority of the road ride it is all about the torque. It really is the ace card of the RR, and makes it refreshingly easy to ride, even at a brisk pace. 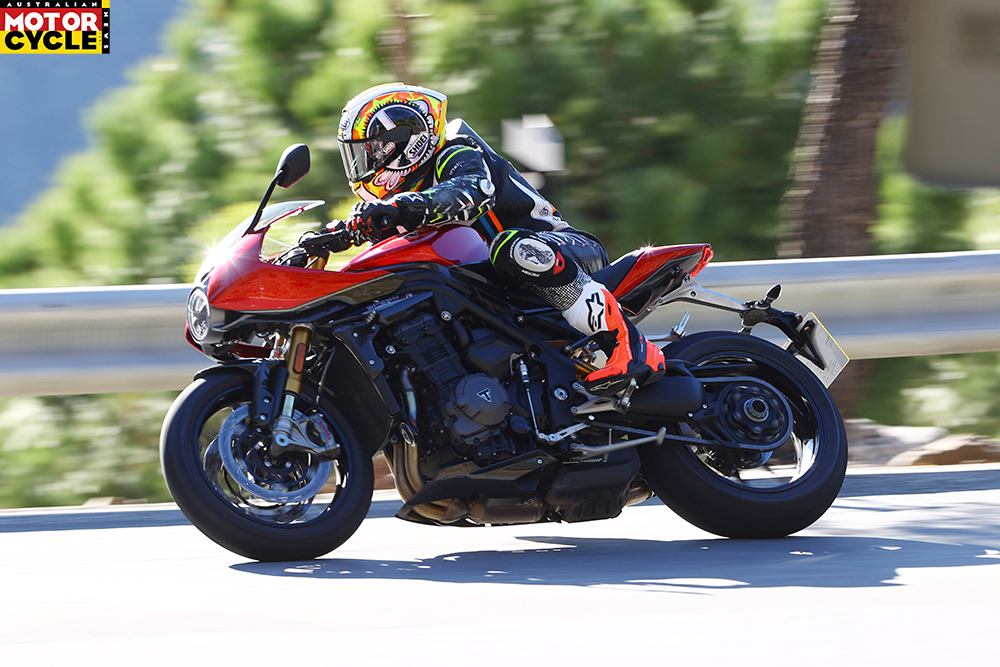 The fuelling is a little sharp at slow speed in the Sports mode, but that can be rectified by flicking into Road or Rain mode. Again, as with the semi-active suspension, there is a noticeable change between the modes. My sole complaint is that the lovely looking colourful clocks – similar to the RS’s, but now with the suspension settings displayed – are not initially intuitive and take a little getting used to. A couple of times I wanted to quickly flick between modes, an action that should only require me to take my eyes off the road for a second or so, but it always took me a few repeated glances. 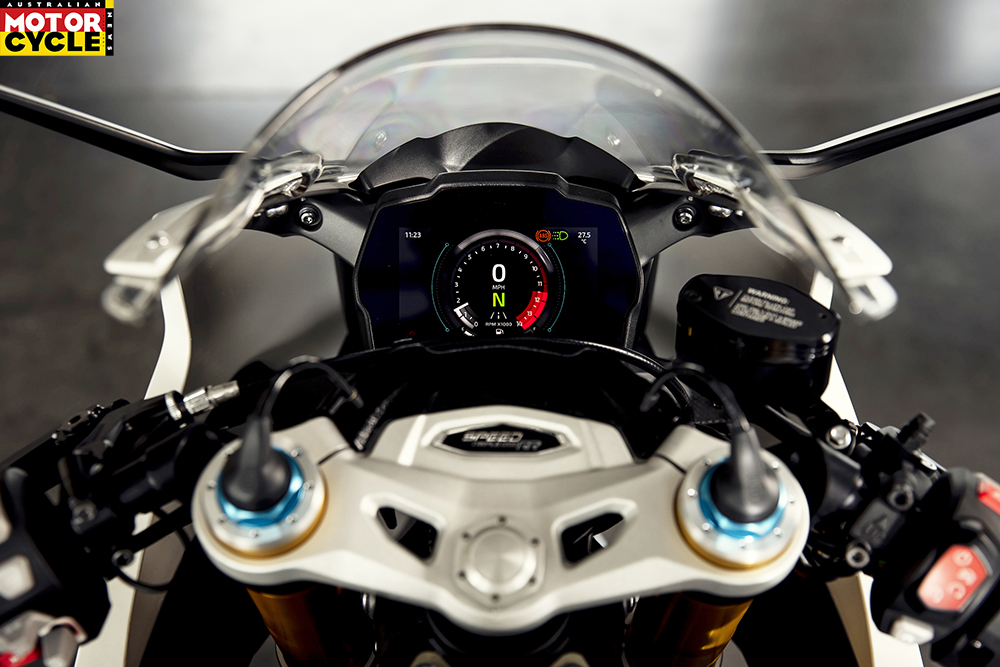 The famous Ronda road was flooded with motorcyclists tearing up and down its stunning twisties, yet I never wanted any more power or handling, nor did I wish to be on anything more sporty – especially when we stopped for coffee, and admirers flocked to the bike like seagulls to dropped chips.

You don’t have to dress like a Power Ranger to ride the RR; a protective jacket and jeans suit it just fine. Alternatively, you can get into full leathers, flick into Sport mode and enjoy some spirited knee-down riding with confidence. The lean-sensitive rider aids are there in the background, and will come in useful in slippery and wet conditions. But for 90 percent of the ride I completely forgot about the electronics altogether, and simply enjoyed a brisk and refreshing morning blast. The RR exerts no pressure on you to ride it like you stole it. 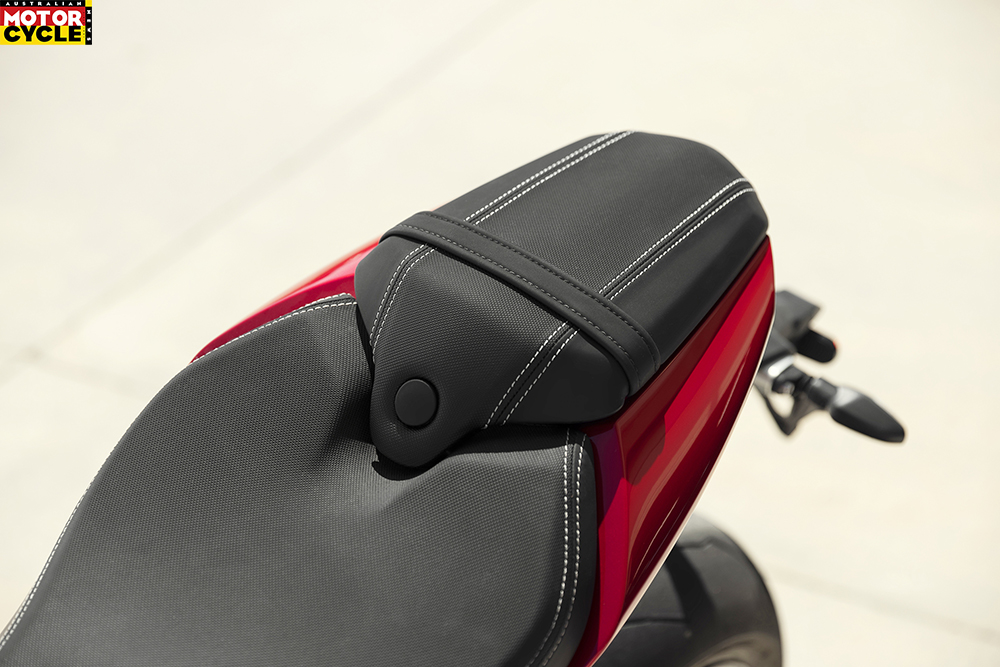 On the final stretch of the road segment of the test, I relaxed completely as the RR piloted me back to the circuit on (standard) cruise control. As a roadbike, I was struggling to find faults. Even after a few hours in the saddle I hadn’t even a hint of the back, bum and wrist ache some stretched-out café racers can inflict, Triumph’s own Thruxton and MV’s Superveloce included. I’d happily cover decent kays on the RR.

I know the Ascari circuit quite well and left pit lane like it was a qualifying session. I rode the 1200 RR on the front-end, pushing for a fast lap, like a racebike… and I felt fractionally disappointed. 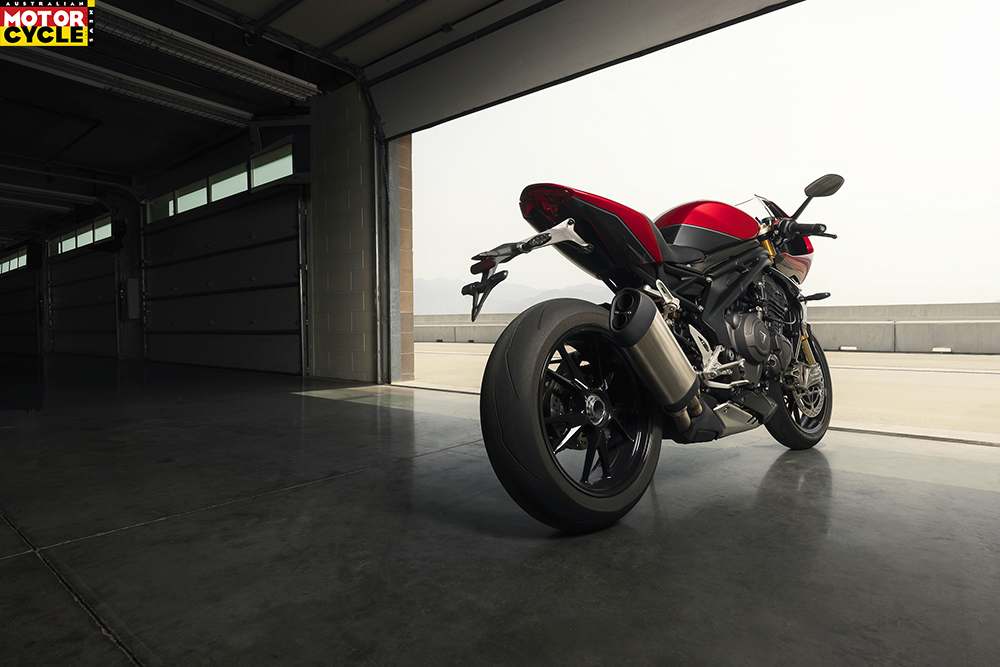 In Triumph’s defence, the new Speed Triple was not designed to be a pure track animal. Within a few laps I realised that the way to get the best out of the RR is to forget lap times and let it flow. That way you can’t help but enjoy the ride, which is arguably more satisfying than a full-on superbike as it’s so easy to pedal and more forgiving, too. In fact, I predict that many trackday riders will have more fun on this than on an edgy, 200hp track weapon. 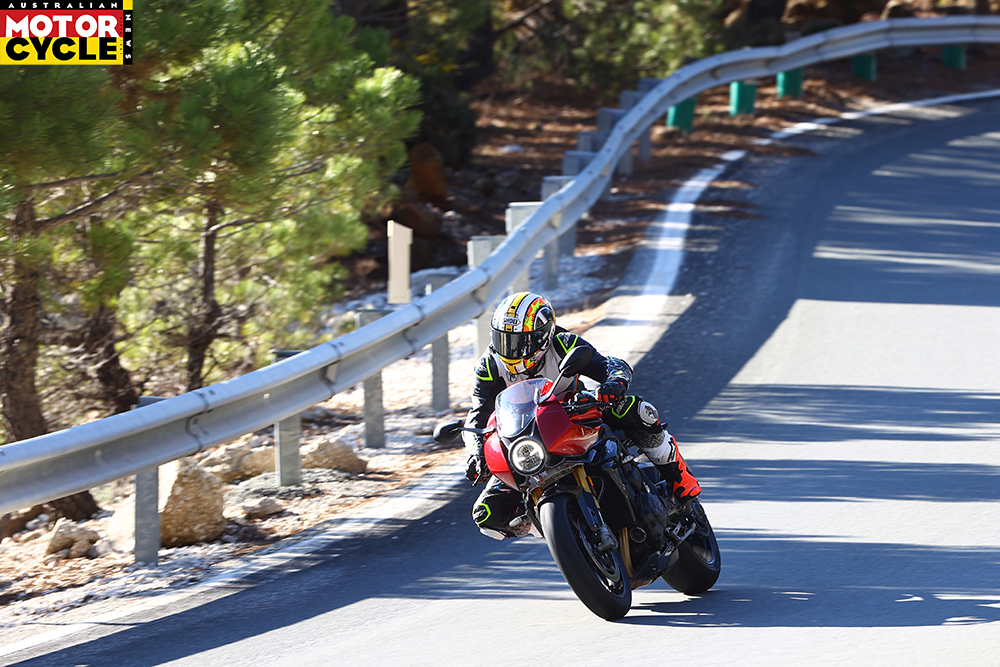 It also feels more rewarding as you start to push towards its limits. You don’t have to be a former Aussie Superbike star to get a toe slider touching, while the rider aids haven’t been designed to dig out fast laps times. Instead, they are positioned in the background, working overtime to give you a sense of security. You can feel them intervening but they are not intrusive – it’s a neat balance. 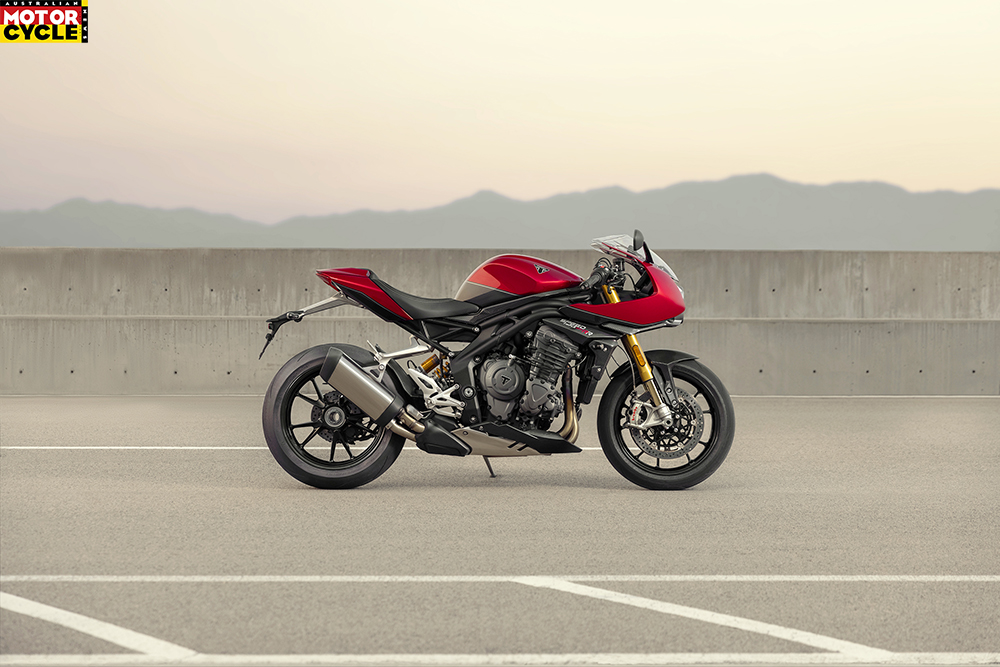 In session two, I opted to use a higher gear than normal, to use all that wonderful torque and enjoy its stable and predictable handing. It’s not a superbike deigned to win races, but it can certainly still cut it on the track. The only drawback was the Brembo Stylema stoppers, which are more than sufficient, but not a 10 out of 10 as the spec suggests. They lacked feel, but only when I was pushing for a quick lap time. 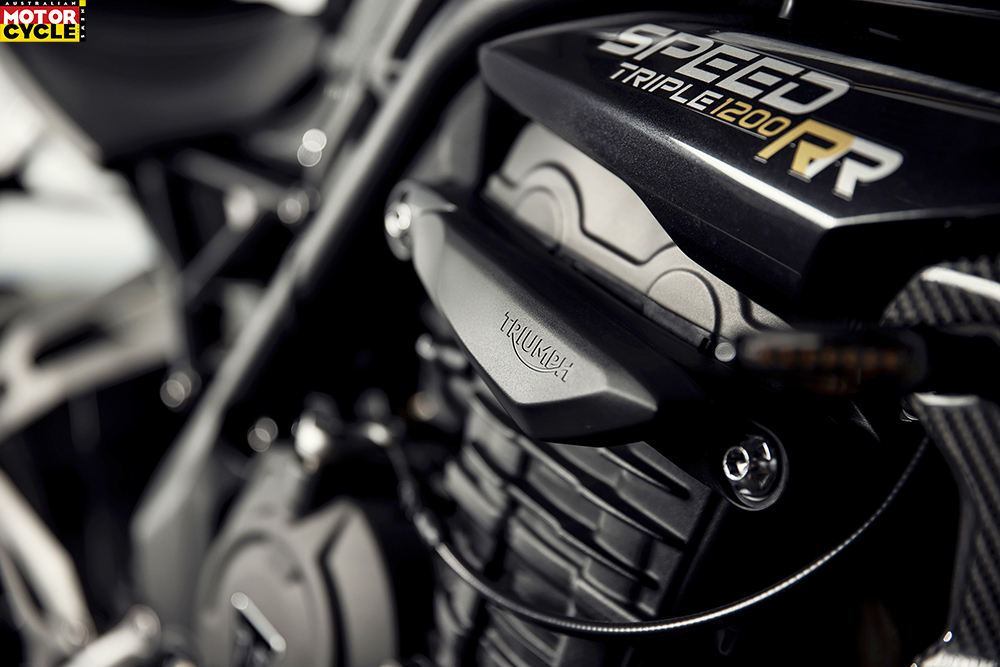 If you want a super-sharp track tool then look elsewhere. The Triumph Speed Triple 1200 RR is an enormously competent sportsbike that’s capable on track but confidently focused on the road.

Make no mistake, with more torque than most road-legal superbikes and 178hp, the RR shouldn’t be underestimated, but it’s not a racebike – it is more than that. It’s a lovely looking, desirable, charismatic motorcycle –
a well-judged update on the café racer. 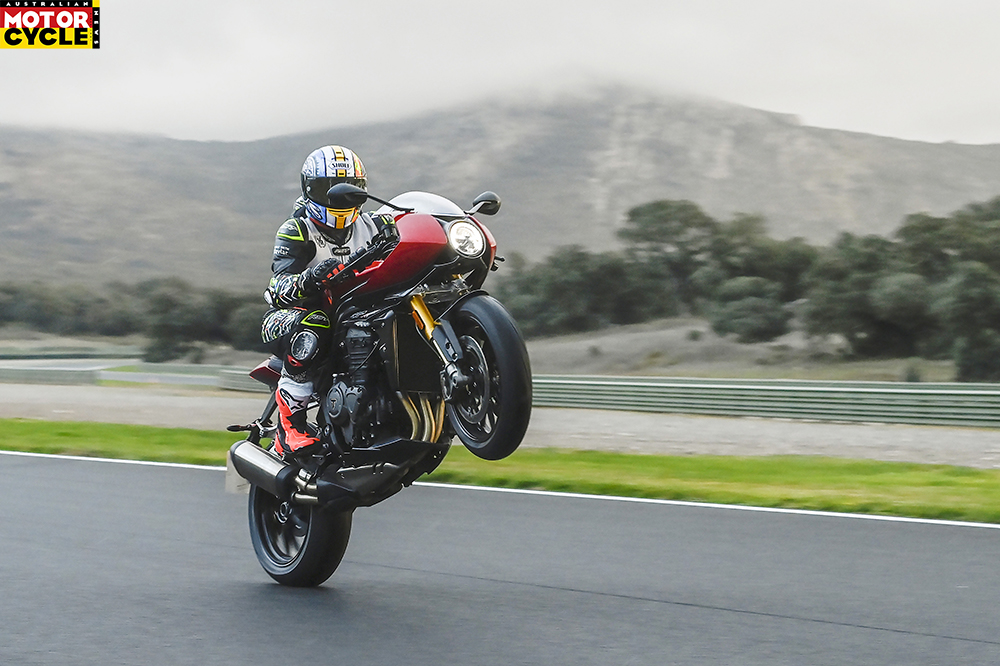