Yamaha TMAX 530 – With ever-increasing traffic and a dwindling supply of city parking, scooters have become a logical and popular choice for commuters – all you have to do is look at CBD parking lots to see a plethora of them. The reason for this is that scooters are easy to handle, convenient and relaxing, not only for the new rider but also the experienced motorcyclist who wants a runabout for the city.

While smaller scooters with engine sizes below a quarter of a litre are perfect city bashers, they reach their limits quite quickly out on the highway or in the twisties.

Back in 2001 Yamaha released its first TMAX, a scooter that could be used to run down to the local shops, but which also offered performance more closely resembling a motorcycle. Basically it was Yamaha’s attempt to bridge the gap between its scooter and bike ranges. 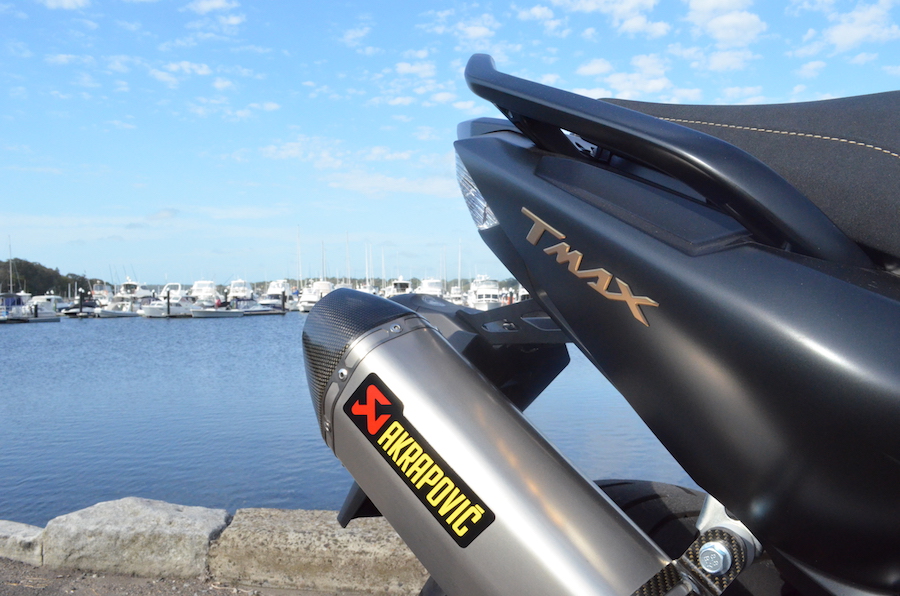 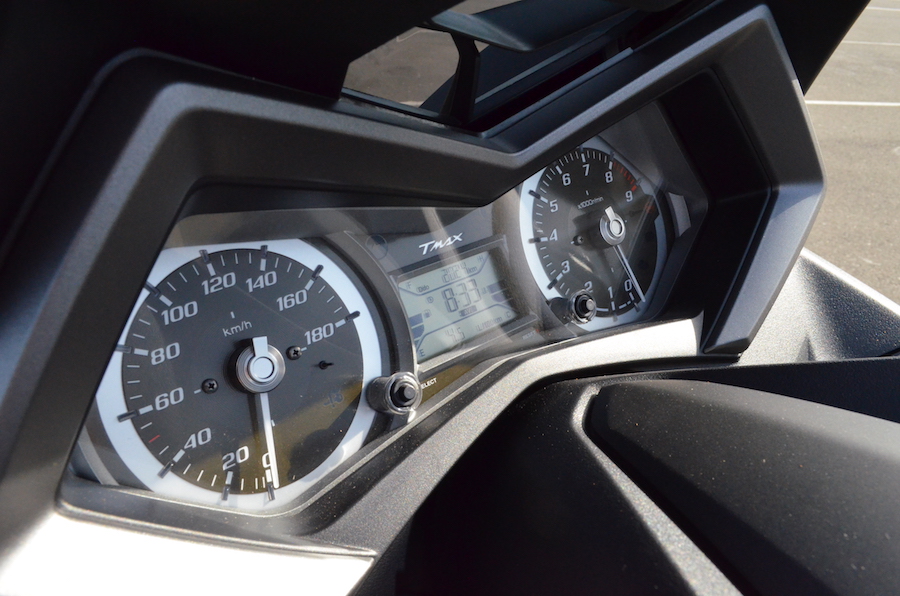 Powering the TMAX is a 530cc liquid-cooled, DOHC, four-stroke, in-line two-cylinder engine that produces 34.2kW at 6750rpm and an impressive (for a scooter) 52Nm at 5250rpm. While it may not have the output that some other maxi-scooters produce – BMW’s C650 makes 45kW and 63Nm – the real-world performance gap is remarkably smaller thanks to a 27kg weight advantage over the Bavarian.

Twist the throttle and the Yamaha launches with an impressive amount of oomph that builds smoothly and strongly before an acceleration surge kicks in at around 20km/h. It’s not motorbike acceleration, but the sprint to the ton is in the realm of some pretty expensive sports cars.

Fuelling is crisp and accurate. It’s a little sluggish off the start (a trait for all twist-and-gos) but once up and running it offers one of the better throttle responses I’ve felt on a scooter. 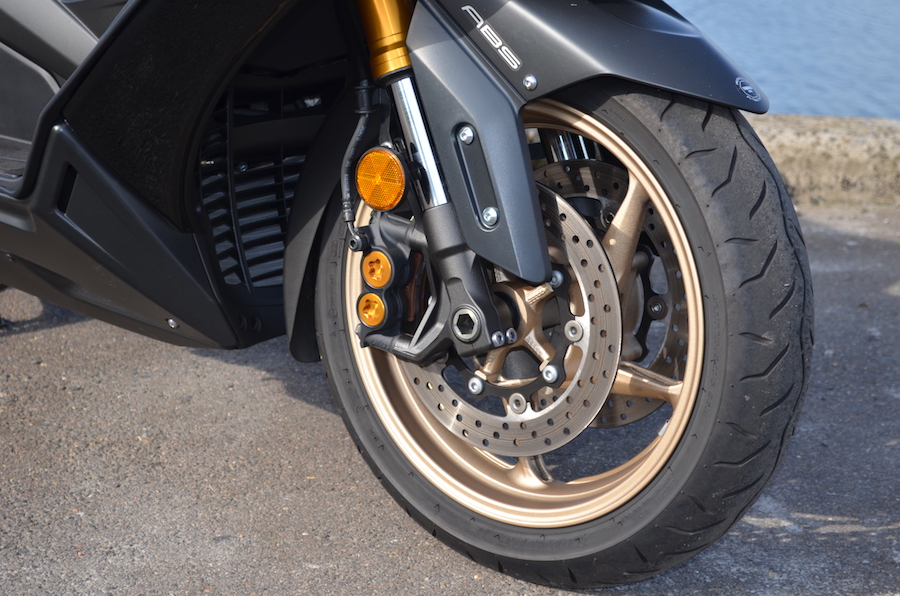 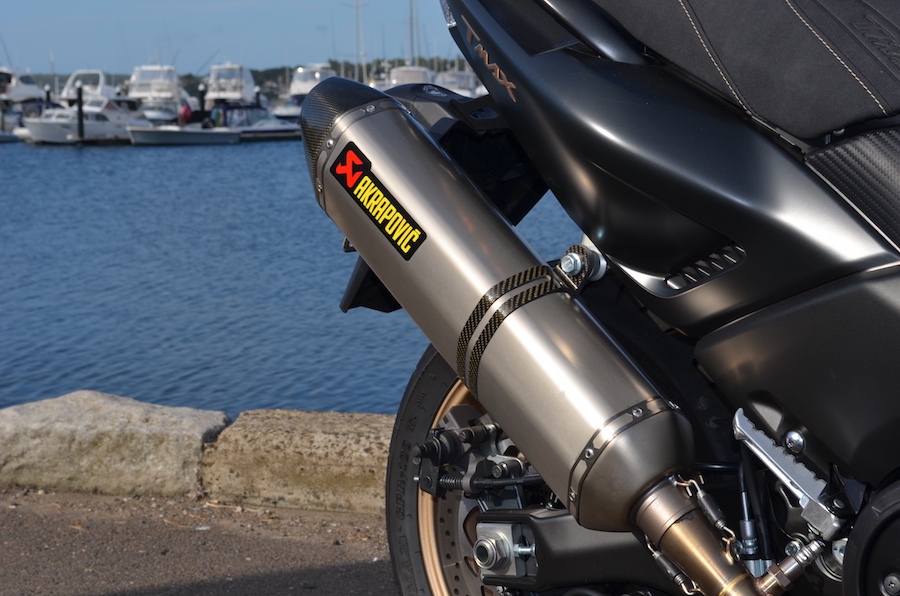 The TMAX is not as nimble as its smaller rivals, but it does disguise its claimed 222kg wet weight quite well, thanks to a low centre of gravity. While it’s still sprightly enough to slice through traffic at slow speeds, slightly more concentration is needed to maintain stability and to also make sure its wider body doesn’t inadvertently clip something as you make your way to the front of the queue.

The 1580mm wheelbase slows the steering a touch, but as speeds increase it more than makes up for it with higher-speed handling. Tip-in is accurate and there is no wallowing from the chassis, a deficiency that many smaller scooters suffer from. Coupled with the fitment of 15-inch wheels front and rear, it really allows you to lean on the front Dunlop Sportmax GPR-100 tyre without worrying that the front end may tuck at any moment.

The brakes are by far the TMAX’s best attribute. Hauling it up is the job of a pair of 267mm discs and four-piston calipers up front, while the rear 282mm disc is pinched by a single-piston caliper. For 2017, Yamaha has included ABS, and in my opinion it’s an extremely worthy addition, especially for negotiating city traffic in wet weather. Front-brake lever feel is both progressive and strong, while the rear brake lever shares these same qualities. A lever fitted under the left switchblock allows you to engage a handbrake when the scooter is parked. There is quite a bit of storage under the seat, but it will only fit one full-face helmet. There’s no cruise control or heated handgrips. Maybe Yamaha could look at fitting those on the next TMAX?

Parts and fitment of bodywork is of a high standard and the LED lights, adjustable brake levers and keyless operation give the scooter a touch of class. There’s also a 12V power outlet fitted.

The model we tested was the Iron MAX special edition, which comes with unique features including the dark paint scheme, gold forks, exclusive instrument panel, different seat and Iron MAX emblems. It was also fitted with the optional Akrapovič full system ($1384) and a low-cut sport screen ($178).

Yamaha’s TMAX offers a package that gives motorcycle-like performance while still keeping true to the easy-to-handle scooter concept. If you’re in the market for a maxi-scooter, make sure the TMAX is on your test-ride list.