The Kawasaki ZX-14R and Suzuki's Hayabusa have been at each other’s throats for years and the battle still rages on. Ding ding!

When you think of modern iconic motorcycles, Suzuki’s Hayabusa and Kawasaki’s ZX-14R will feature in just about anybody’s list of dream bikes. Riders of all ages and skill levels dream of at least having a ride on one, perhaps even owning one. And they have been pitted against each other since their respective inceptions.

The ZX-14R is nearing the end of its lifecycle, but does that mean it has been left behind by the newly updated third-generation Hayabusa? There’s still some fighting left to do. 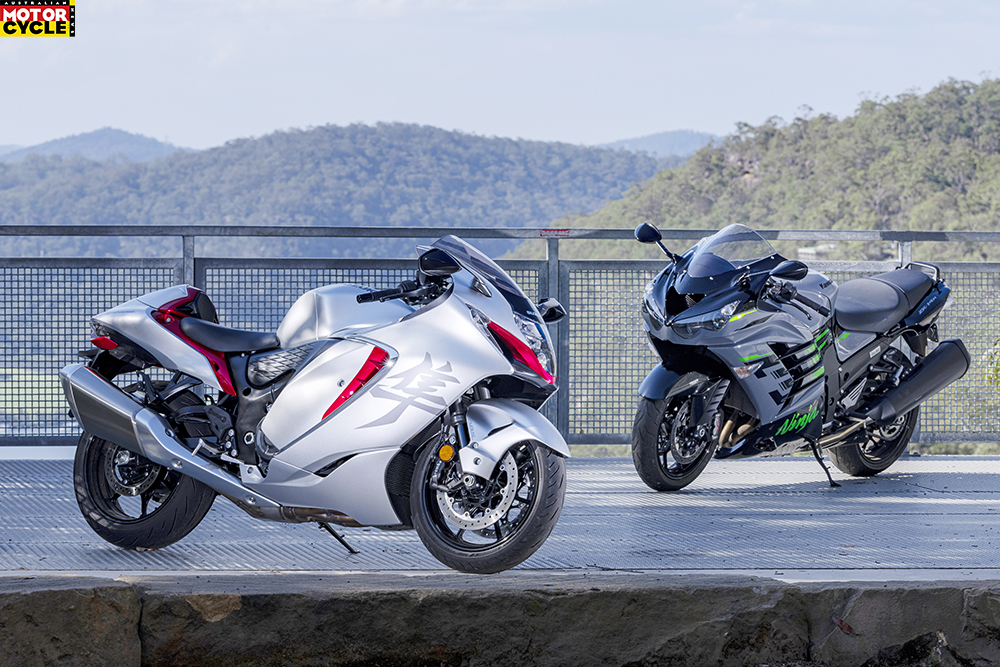 The ’Busa and the ZX-14R share a similar basic architecture. Large-displacement inline four-cylinder engines, alloy frames (although the ZX-14R has a monocoque rather than a twin spar), and a sportsbike-style riding position with a little extra comfort.

They go about things in slightly different ways, but are both stupidly fast and make you giggle like a school kid the first time you run them to redline. They are built for speed, and speed they do. 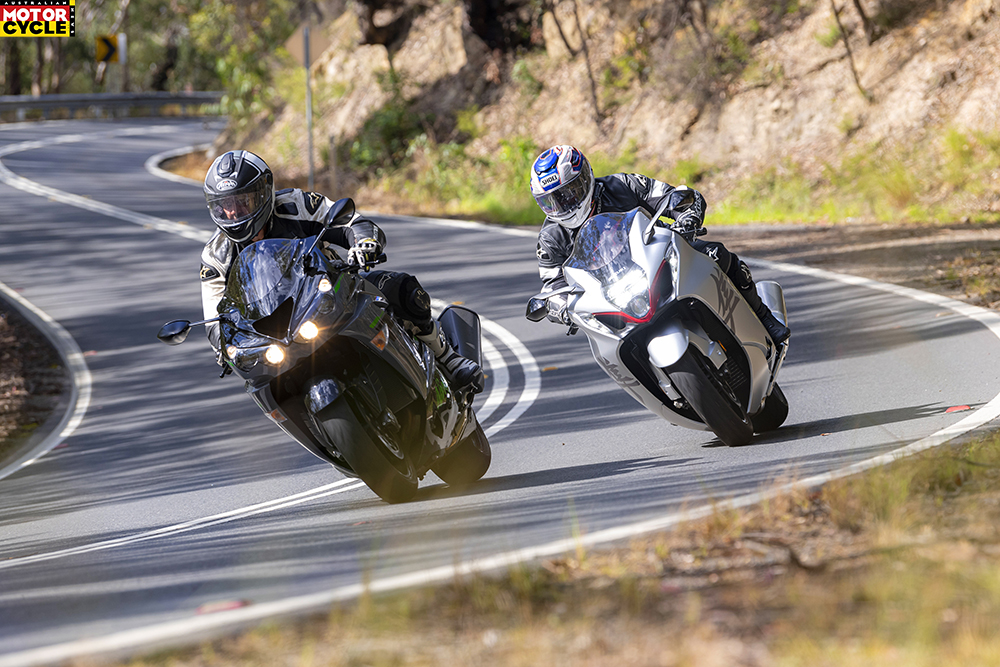 Both of these beasts have an intimidating presence, especially if you see one appear in your mirror. The ZX-14R appears wide and bulbous with the large ram-air intake front and centre. The tall and wide aerodynamic mirrors sit above the roomy front fairing. Down the sides, the warm radiator-air exit is shaped to be as sleek as possible and move the air around the rider and up the rear ducktail. It’s a shape that has evolved minimally since the first-generation ZX-14R. The Öhlins rear preload adjuster adds a little bling and functionality. 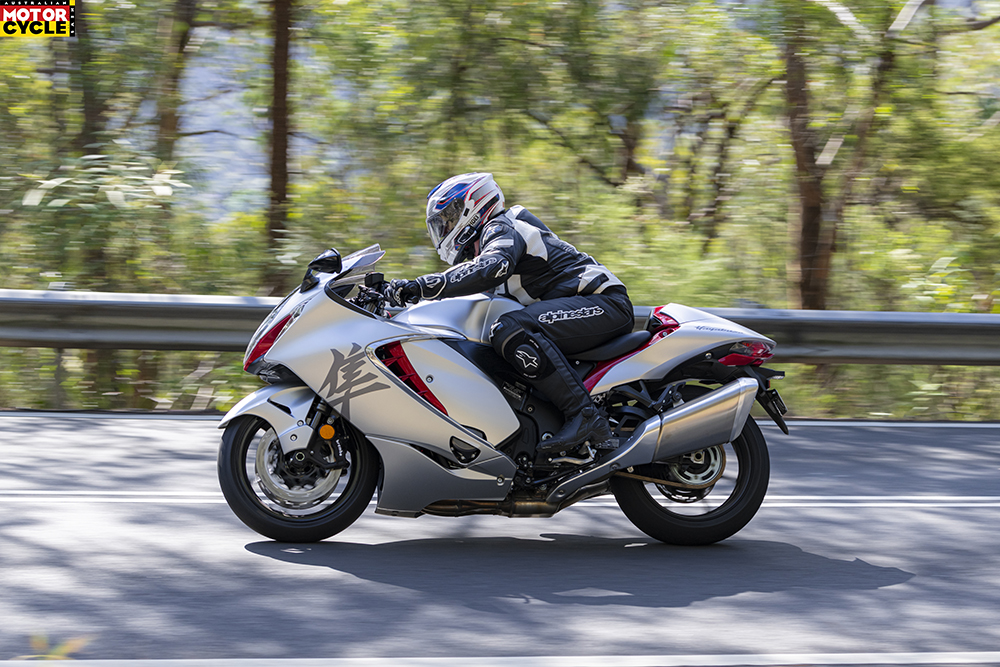 The Suzuki has taken the aero to the next level. The front fairing is lower, more streamlined from front guard to the taillight, and yes, there is even a little aero spoiler under the rear combination taillight. The ’Busa looks smaller as well. Both have the indicators integrated into the fairings for a clean aero look, but the Suzuki’s are all LED, making them look that bit nicer. The Suzuki is also available in a couple of colours; black/gold or silver/red.

My pick is the Hayabusa in the looks department, the ZX-14R just can’t compete with the attention to detail. Everywhere you look on the ’Busa you find neat little details – the Hayabusa Kanji symbol a perfect example. 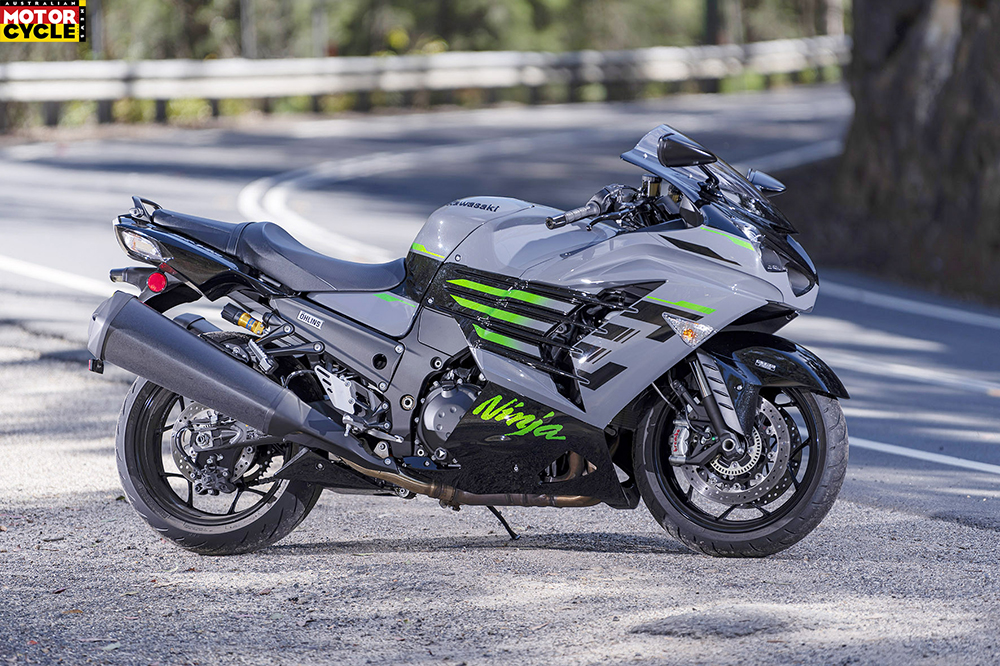 The ZX-14R has five more kilograms to haul and a much larger front section to push through the wind but it also has seven extra kilowatts and 100 more cubes to do it with. And the faster you go the more power it makes, thanks to the massive ram-air intake up front between the headlights. According to Kawasaki, the ram-air effect increases power by an extra 7kW. The Kawasaki power curve feels straighter than
the Suzuki and keeps powering on when the Suzuki curve tails off up top after its meatier midrange push. 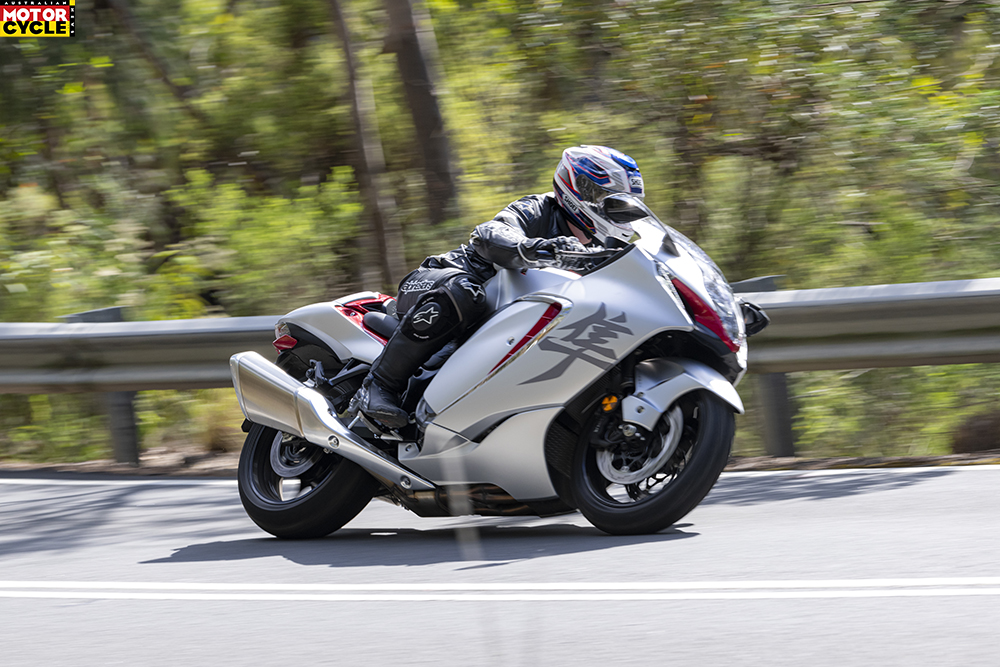 The Suzuki is a bit of a quiet achiever; there isn’t much engine noise to be heard over the wind, whereas the Kawasaki has the signature wail of induction noise as the revs rise under full throttle. Let’s not beat around the bush, they are both eye-wateringly fast and will throw the front wheel straight up and put you on your arse in the first two gears if it wasn’t for traction control, but the Kawasaki does have an edge over the Suzuki right up the top end of the rev range. I’m not able to run them side by side against each other, but on a private road I’m able to wind the speed up on both bikes from a standing start to up over 200km/h and the Kawasaki gets about 15km/h more by my braking mark, despite the fact the Suzuki boasts a quickshifter. We have to remember though, the Suzuki is Euro 5 compliant where as the Kawasaki is not. It’s like jogging while wearing a face-mask for the ’Busa. 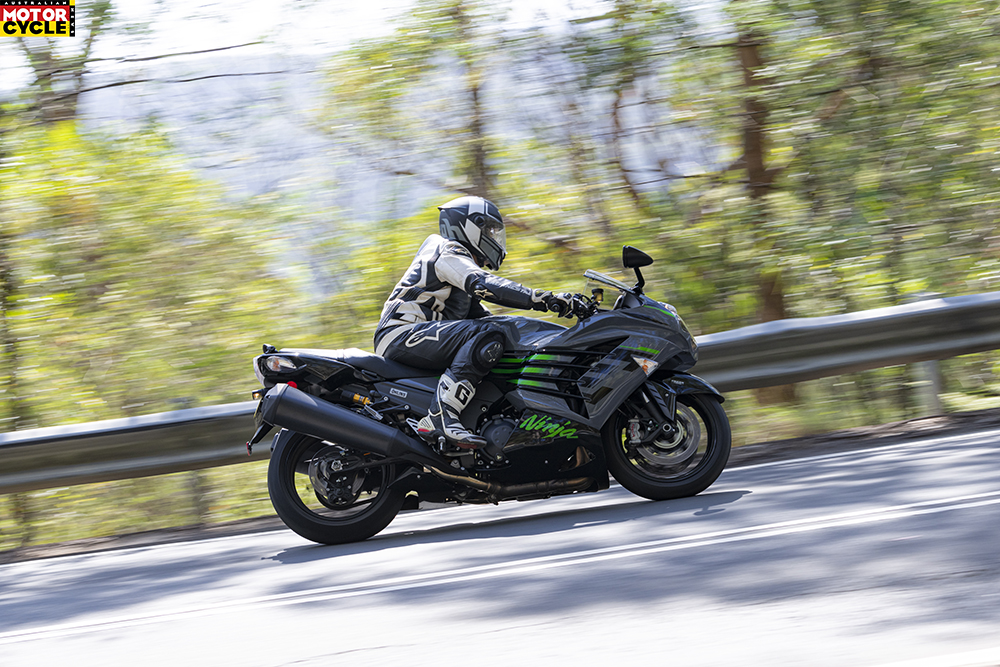 Both bikes have power modes to flip between on the fly. They have the desired effect of softening the power delivery, but unless you are riding in treacherous conditions, why would you want to hold these weapons back? Let them sing their song and hang on tight.

With high performance comes lots of braking and both of the bikes are fitted with top-notch Brembo stoppers, so they do well here. The Hayabusa runs the top-shelf Stylema calipers with 320mm discs and the ZX-14R runs the M50 Monobloc calipers with 310mm discs. Both do a phenomenal job of hauling up these big rigs from warp speed, but I think the Suzuki has the edge over the Kawasaki, as there is a little less effort required at the lever and therefore more accuracy. But this round win goes to the ZX-14R. 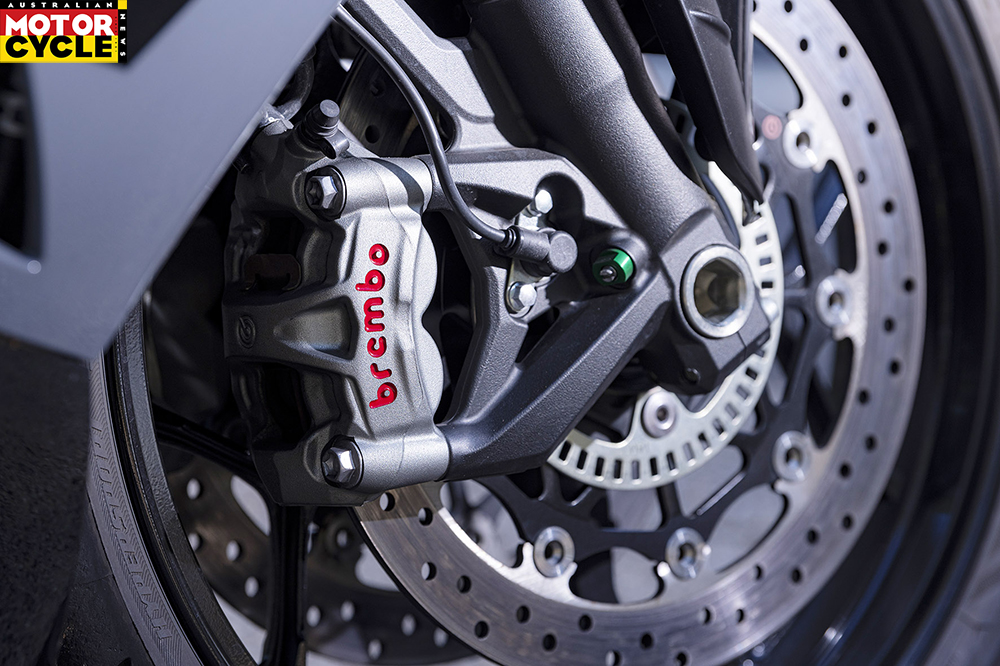 For two bikes that are so similar in philosophy, they feel quite different. They run the same Bridgestone tyres, so that doesn’t get in the way of comparisons. The Hayabusa has a longer reach to the ’bar and this in turn puts more rider weight through the front fork giving it a sportier feeling to ride. So when jumping off the ZX-14R, the ’Busa immediately feels more agile to ride. It falls into corners effortlessly and loves to hold a constant line around the bends. It certainly doesn’t feel long and heavy, at least not until you need to change directions rapidly, then it shows its heft a little. 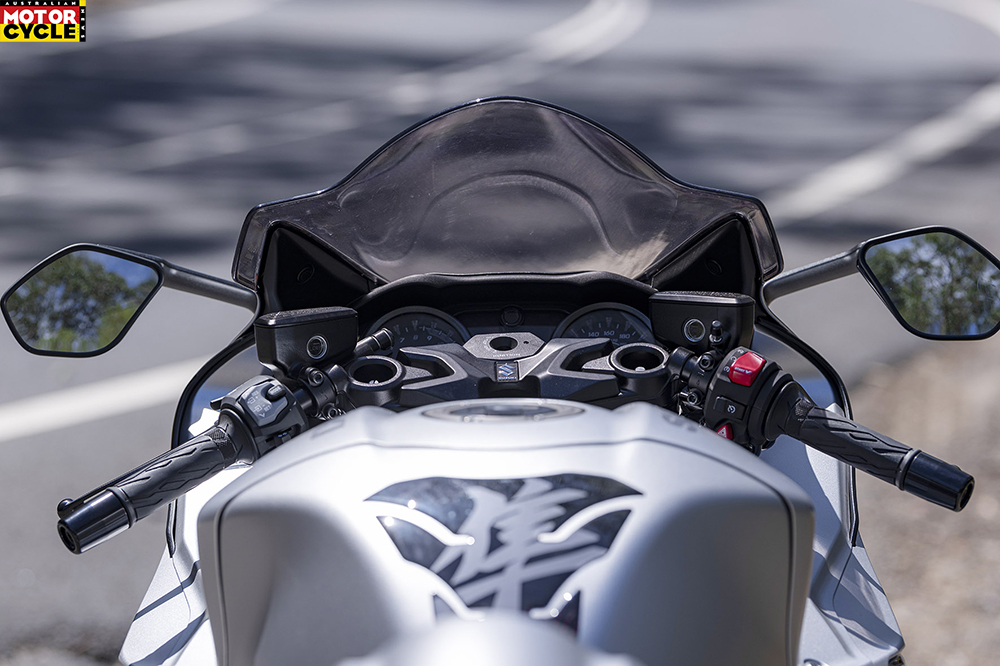 The ZX-14R feels like the ’bar is closer and wider but you really need to push it into the corners with the inside ’bar and keep the pressure on it throughout the turn. On tight and twisty roads it wears you out a bit faster than the Hayabusa. The suspension on both bikes is quite soft compared to a full-on sportsbike to help with comfort. They both soak up the bumps well, but can run out of front travel while braking hard across bumpy surfaces. 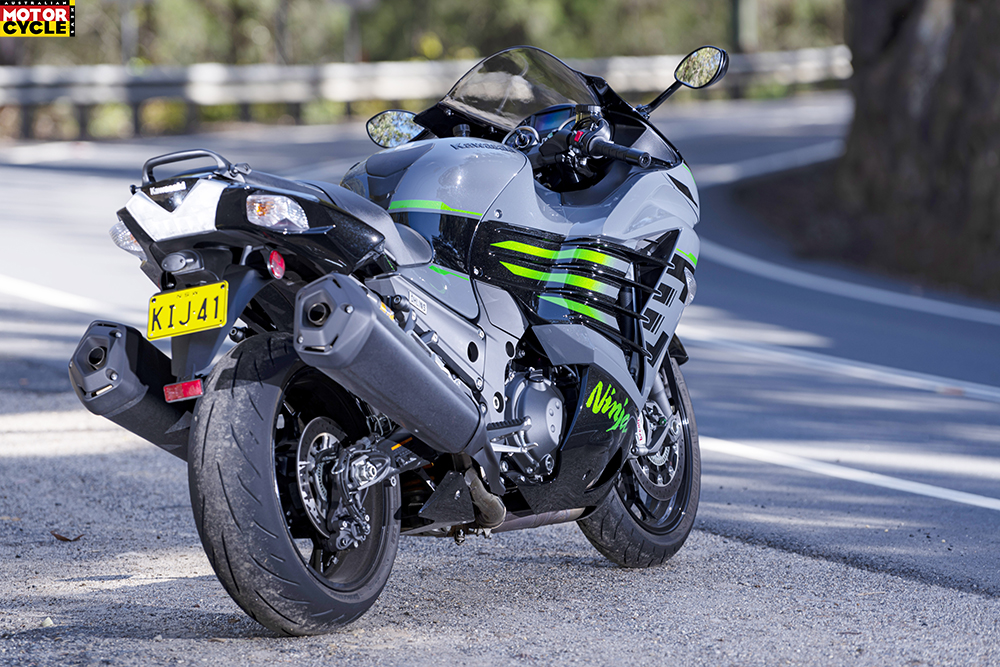 The rear-ends are very planted and well behaved while dealing with the bulk power that gets unleashed on them. I like to ride with the traction control turned off and, on the ZX-14R, the rear tyre spins and squirms under power high in the rev range exiting corners with the front wheel just off the tarmac. That Öhlins shock is working overtime out the back. But the Hayabusa chalks up another round. Suzuki two, Kawasaki one. 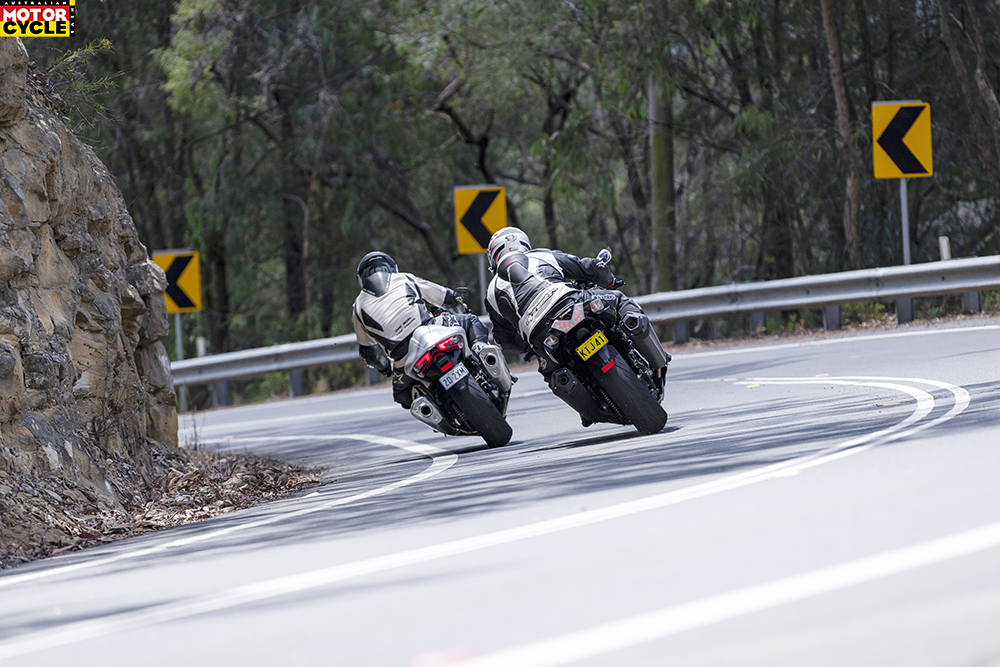 While taller people may struggle over longer distances on the Hayabusa, at 175cm I feel pretty comfy on it. You are more hunched over the tank than the Kawasaki, but it’s not like jumping on a Moto3 bike. The ZX-14R is a more relaxed and upright riding position with less weight on your hands. The Hayabusa has rubber-mounted handlebars to help with vibrations, and I don’t think the Kawasaki needs them – it’s typically creamy smooth. Both bikes have fairly light hydraulic clutches and adjustable levers on both sides. The Suzuki’s screen is pretty small and, unless you have your chin embedded in the steering stem going for 300km/h, its not doing much for protection. 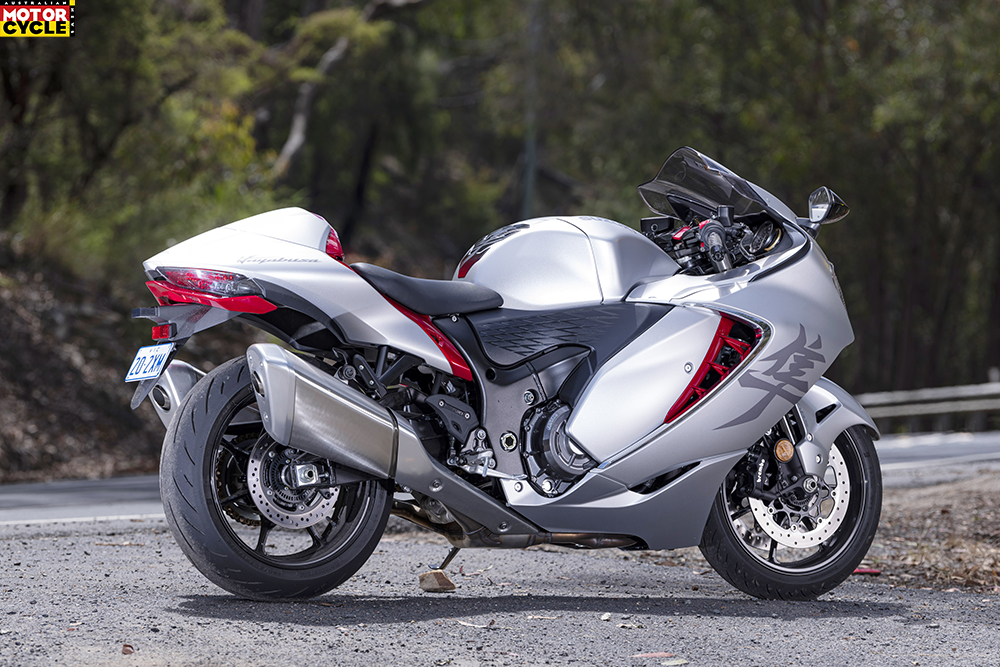 The ZX-14R is much more accommodating with its screen and front fairing. The seat on the ZX-14R is also much better – it’s huge, with plenty of wiggle room. Plus, if carting a pillion at warp speed is your jam, the roomy, squishy and well-shaped pillion seat will stop them sliding around. The ’Busa rider’s seat is firm and shaped more like a sportsbike seat. Not awful by any stretch, but just not as accomodating as the Kawasaki’s. The Suzuki we have on test is fitted with a single seat cowl, which looks the business, but doesn’t give me an idea of the seat that it replaces. A pillion on the Suzuki would definitely be sitting up higher than the rider. 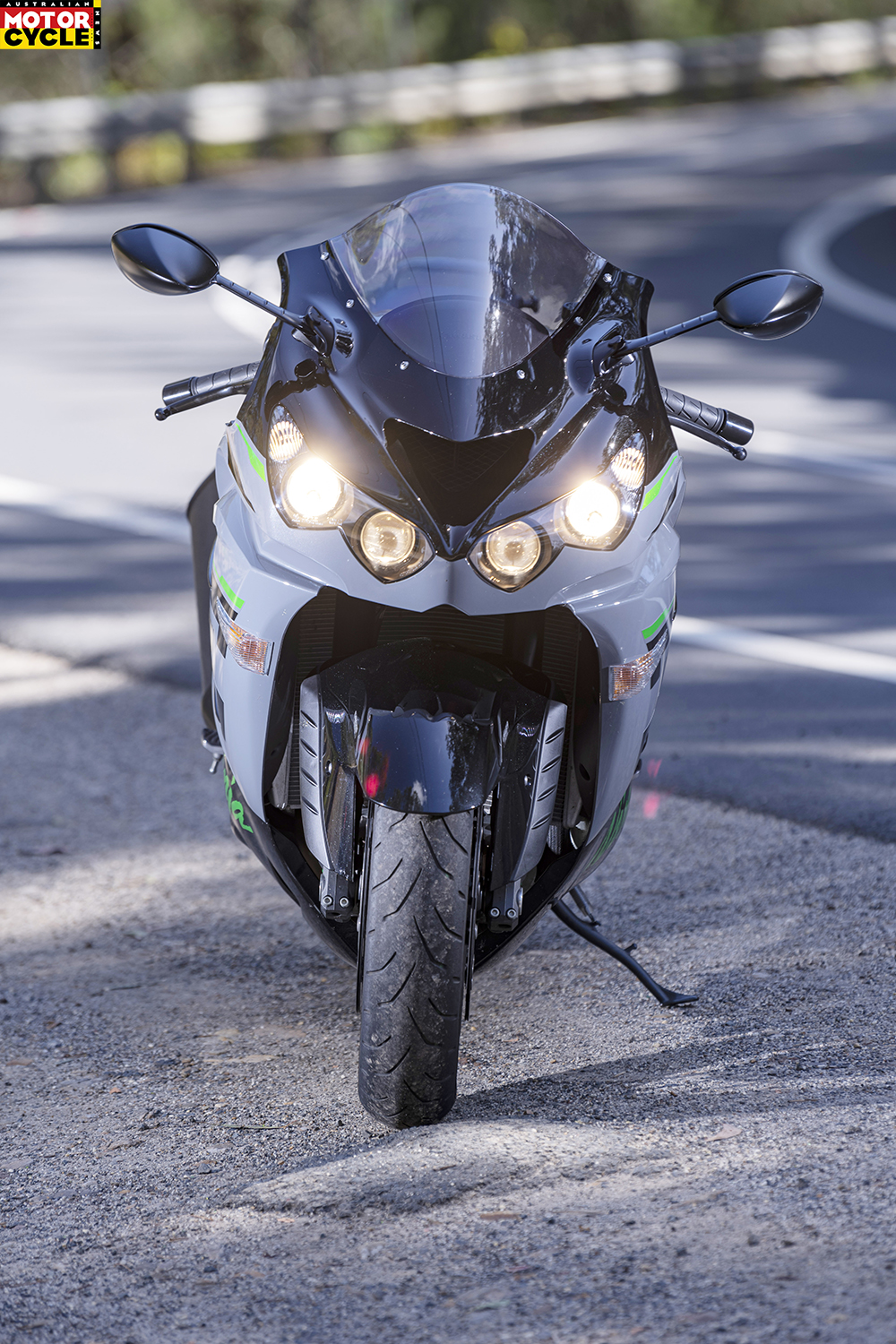 Both bikes are capable of doing over 300km between fuel stops – although much less if you want to explore their performance capabilities – so they need to be fairly comfortable. I’d pick the ZX-14R for a long-distance jaunt, especially with a pillion on-board, though then I’d curse Kawasaki for not including cruise control like the Hayabusa boasts. 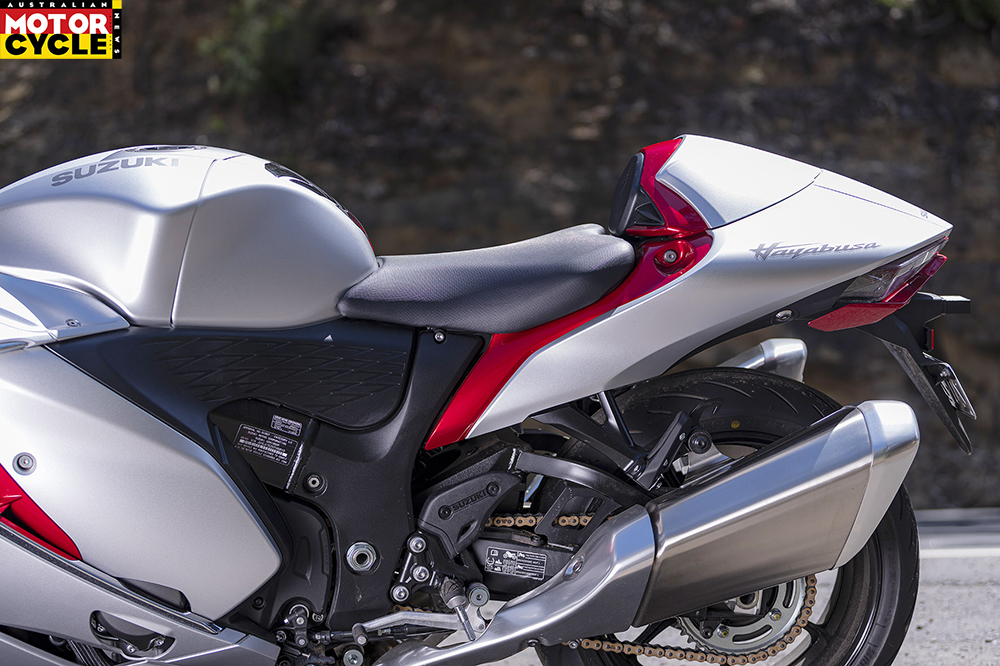 The Kawasaki shows its age as you saddle up and glance down at the fairly basic twin-dial analogue dash and LCD screen. The dash is functional, but it’s a bit bland compared to the Hayabusa’s modern setup. The Suzuki shares a similar theory, but has stepped up the game with a much sleeker cluster; the screen nestled between the two analogue dials is a beautiful full-colour TFT jobbie and as well as looking fantastic it’s loaded with information. 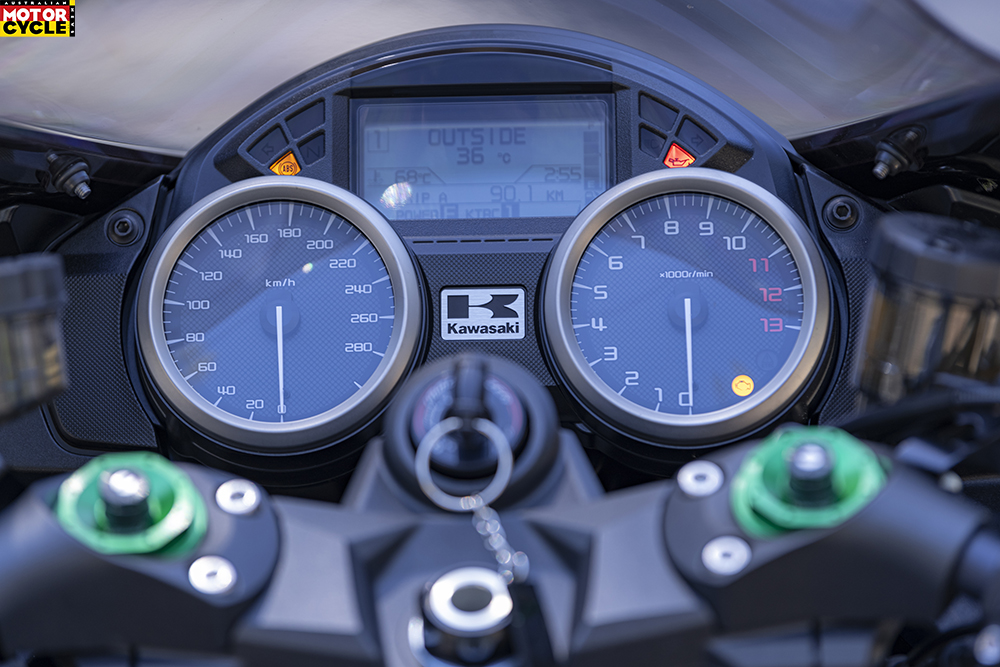 Full TFT clocks are nice, but I’m not against analogue dials. As a great man once told me, “when the needle points to god, you’re going to jail,” so a quick glance down can give you an indication of how long you are going to be incarcerated for, even if you can’t read the actual numbers.

Flicking through the ZX-14R’s dash is done intuitively from the left-hand switchblock. There isn’t much to see; outside temp, trip meter, fuel consumption, range and voltage. The two power modes are selectable on the fly, as are the three traction-control modes. There is a little bar that shows how much traction control is cutting in as well, just in case (like me) you think it’s not working when it is. To switch the traction control completely off, you must be stopped. And just as well too, as things can get pretty crazy with it off. 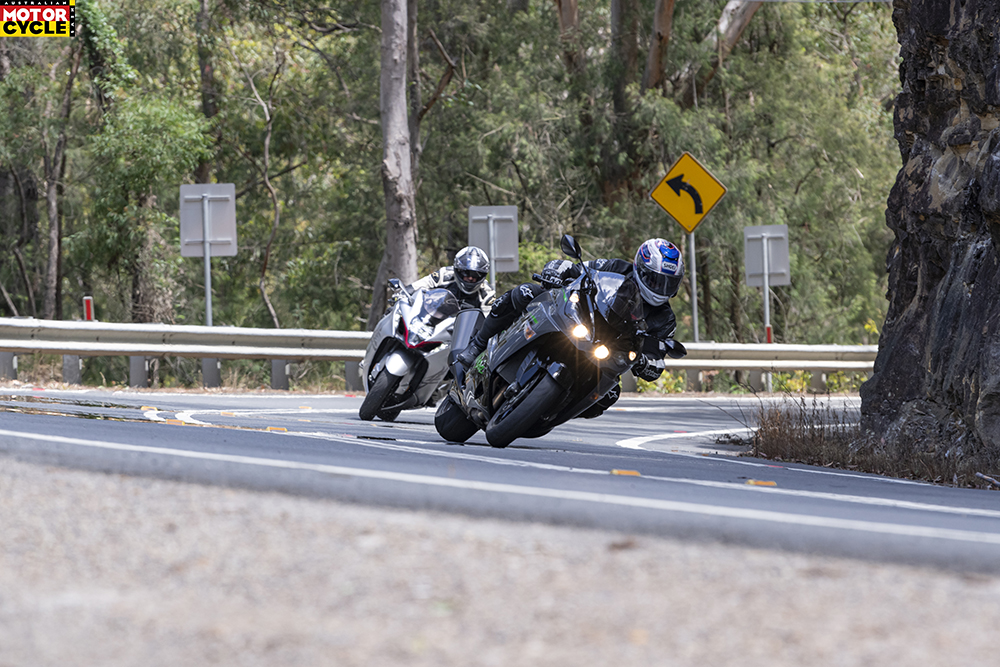 There are three preset rider modes and three customisable modes so you can set one up with no traction control and no wheelie control and flick to it on the go. If you can spare enough time to look away from the road, you can even see your lean angle, brake pressures, throttle input and forward and backwards G-force being displayed in real time on the dash. The Hayabusa is fully loaded in terms of tech and takes the clear win this round. 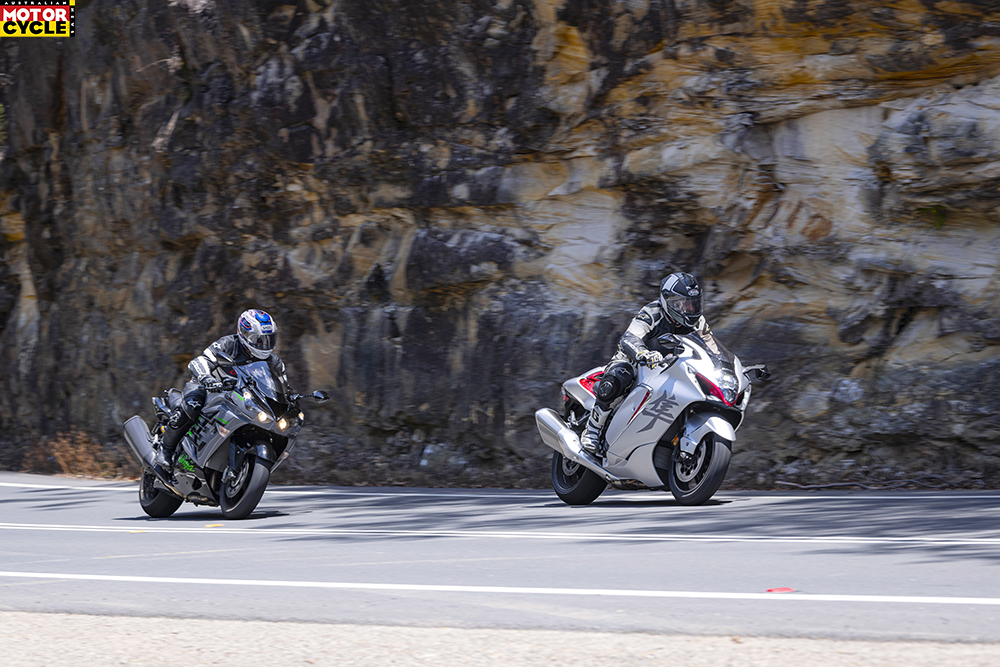 All the updates to the Hayabusa don’t come for free. It’s equipped with the best tech available in the segment. Build quality is flawless and it looks great while still retaining its heritage. It comes at a cost of $27,690 (ride away). It’s certainly not bad value for money, but it’s pricier than the ZX-14R by a fair whack. 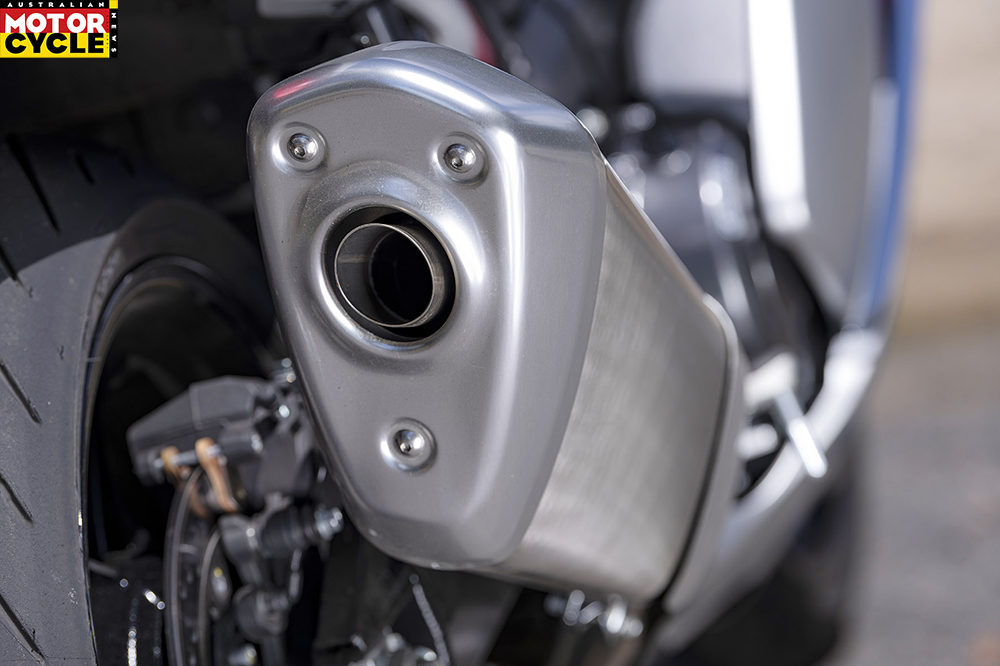 The Kawasaki comes in at $22,399 (ride away), some $5000 less expensive. You are getting older tech and less safety equipment but a bike still capable of taking it to the ’Busa with five grand still in your back pocket. That’s a set of bling pipes and a stack of rear tyres – and you will need tyres, lots of them, as they eat them like I eat doughnuts. This one could go either way, but I’ll give this one to the ZX-14R, as its still holding its head above water, despite its age. 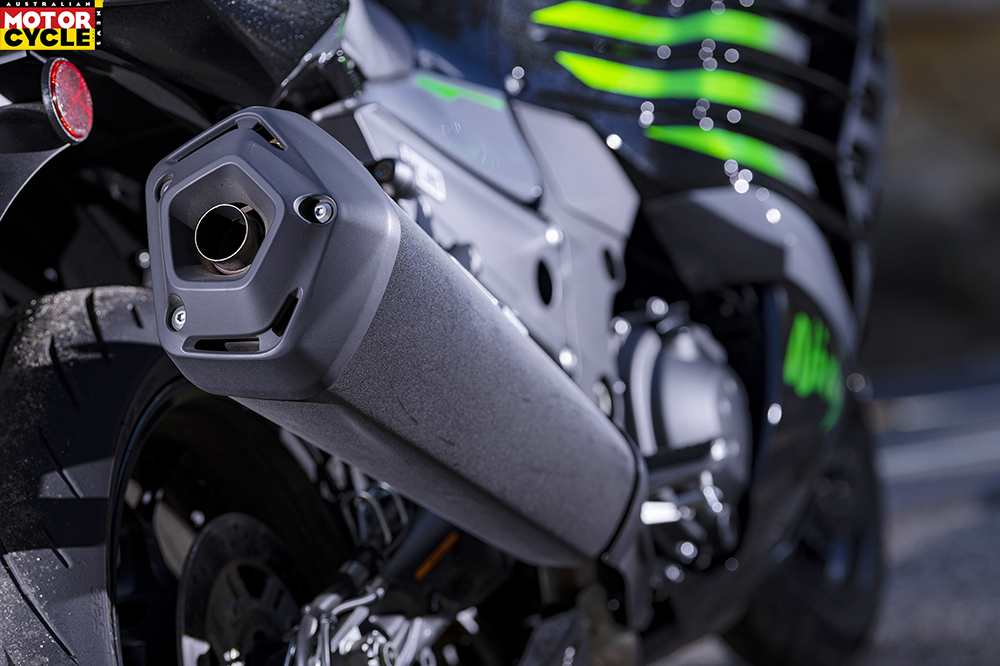 The ZX-14R and the Hayabusa are the last men standing of the category that was once brimming with rockets. Remember, the Honda CBR1100XX Super Blackbird and also the BMW K 1300 S were great competitors once upon a time.

So where to from here for the ZX-14R? Euro 5 mandates are coming in hot and will knock the ZX-14R out of the market if it’s not updated quickly. I can’t help but wonder if Kawasaki will let it slide away quietly or tap into a bit of that supercharged know-how they have from the H2 and bring out a new big-bore sportsbike. Watch the price of admission jump up then! 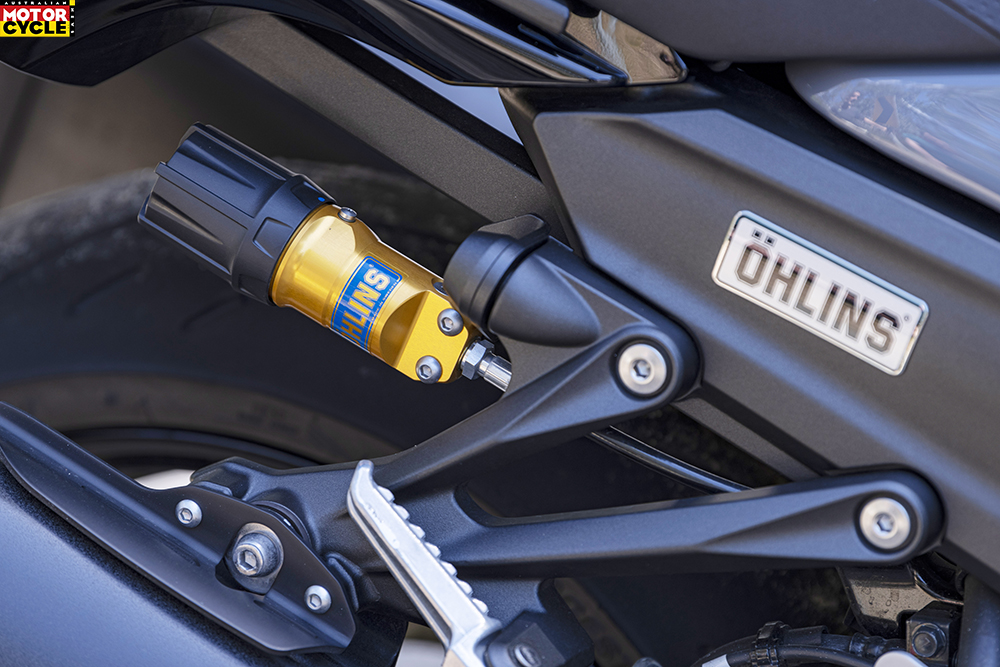 The Suzuki is here to stay in its current guise. It’s an excellent package and a worthy successor to carry on the long and rich Hayabusa legacy.

With a score of three rounds each and no knock-out blows, it looks like a unanimous draw.

I can’t pick a winner. Let your heart decide. 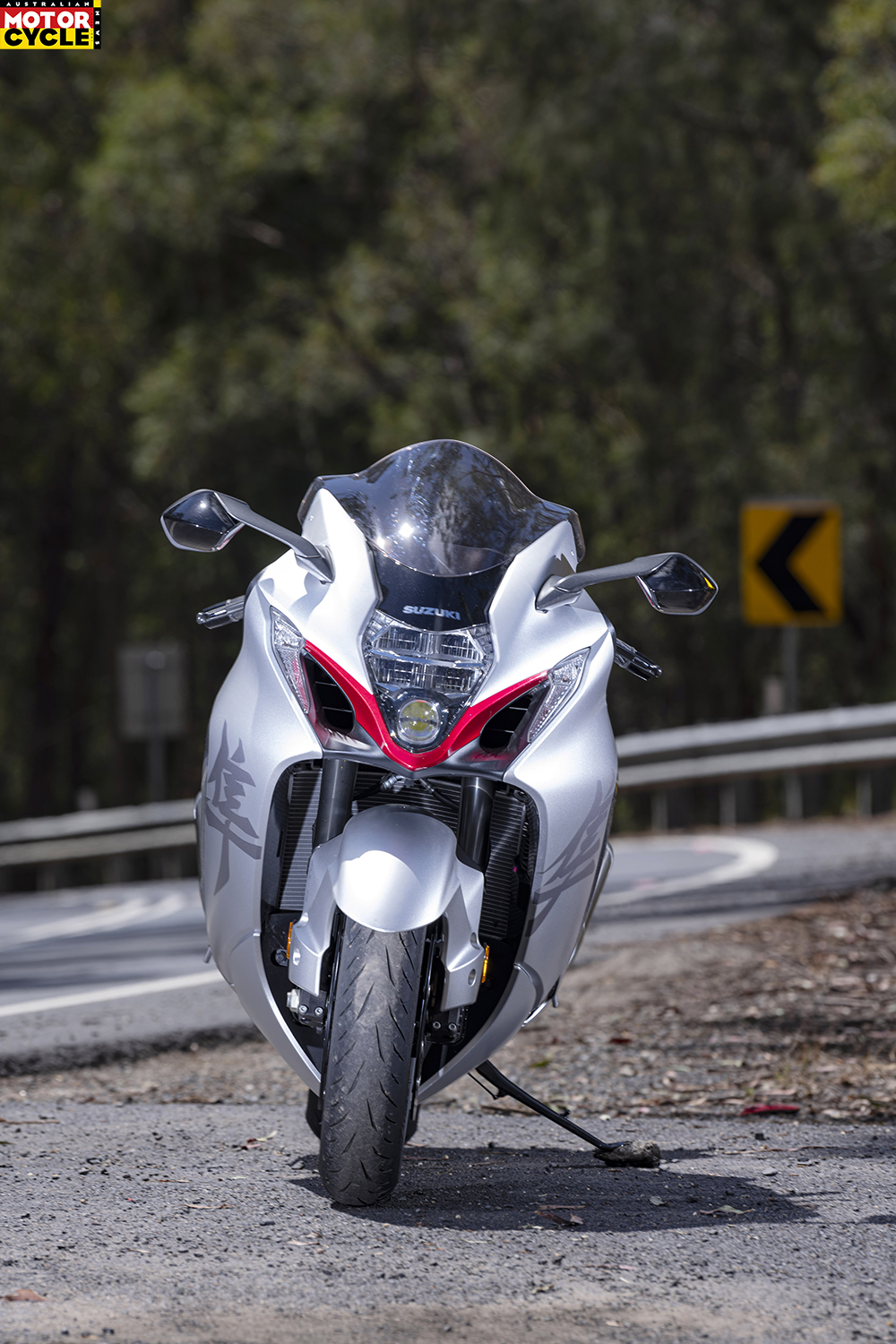