In 2017, 14 years after the first ‘all-roads’ Ducati bearing the Multistrada moniker hit the market, the firm introduced the Multistrada 950 as a leg up into the Multistrada world. Ducati wanted to make that move even easier for 2022 with the Multistrada V2 and, thanks to new ergonomics, a thinner and lower seat and a significant weight saving of 5kg, it has succeeded.

Ducati hasn’t tried to reinvent the proven Multistrada wheel. It simply looked at how it can improve the existing model with small but significant changes like a lighter clutch, a roomier riding position, and a large saving on unsprung weight compared to the 950, using the lighter wheels from the range’s premium Multistrada V4.

I’ve packed the 2022 Ducati Multistrada V2’s optional panniers with a few day’s worth of gear and I’m heading out into the stunning scenery of northern Italy. It’s surprising how many ‘essentials’ you can fit into the Multi’s panniers. At 26 litres the right pannier is slightly smaller than the left (30 litres), due to the exhaust routing, but both ooze quality, with a simple lock and release system. There is extra storage under the seat, next to a conventional charger and a USB port. There’s even an additional charging point next to the full-colour TFT five-inch dash – how many charging points do you need?! 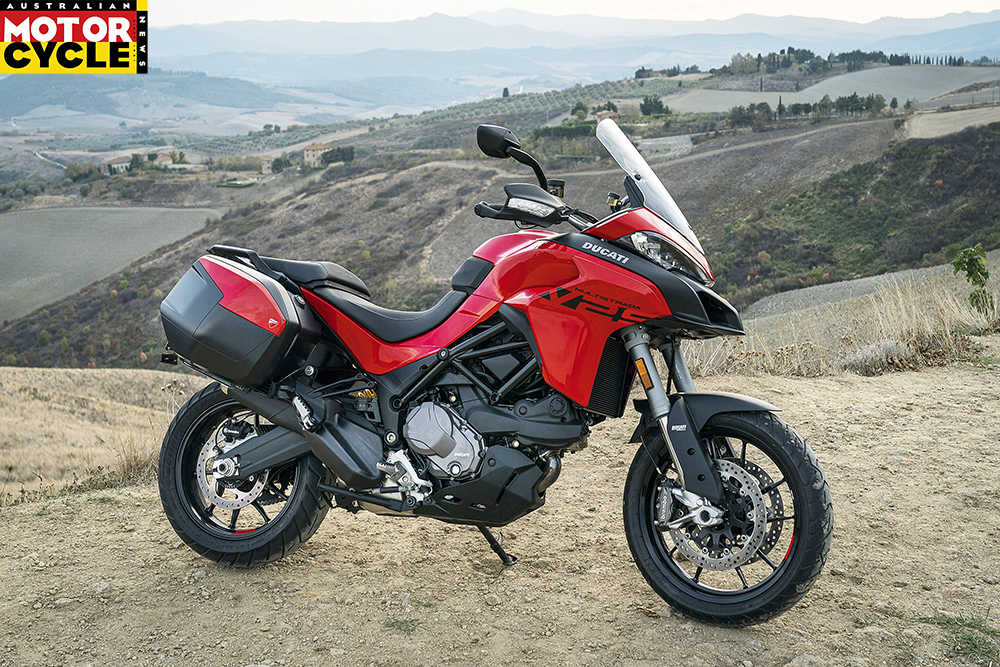 As before there are four riding modes to choose from: Urban, Touring, Sport and Enduro. Yes, with a 19-in front wheel and slightly off-road looking Pirelli Scorpion Trail 2 rubber, the new Multi V2 is capable of light
off-road duties.

Among other differences, the more expensive S model option comes equipped with Sachs ‘Skyhook’ suspension, or electronic adaptive suspension to most, meaning each riding mode changes the suspension set-up as well as the (lean sensitive) traction control and ABS rider aids.

Given that my fully loaded panniers added extra weight to the rear-end, I’ve electronically adjusted the suspension accordingly by selecting ‘rider, plus luggage’ from the menu, which added a little preload. 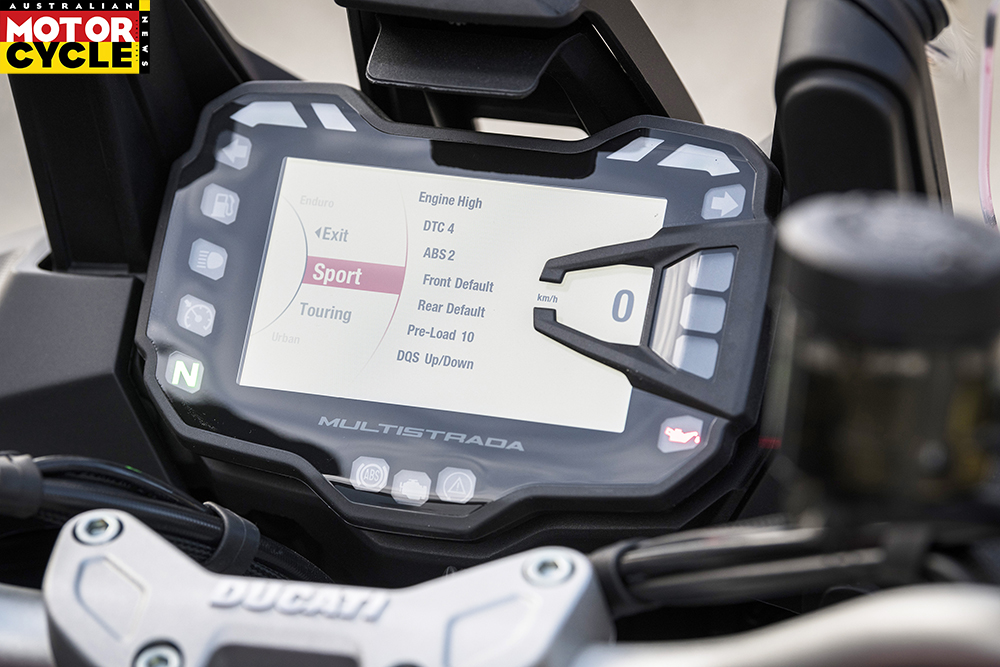 With a few days up my sleeve to get through all the things I’d normally have to cram into a long but single day, it’s rewarding to take my time and get properly acquainted with the Multi V2.

Throwing a leg over for the first time, the 10mm lower seat height and narrower seat shape, which shortens the length of the inner seam arch, are instantly apparent. I’m 172cm and almost flat-footed on the tarmac, which is rare on bikes of this ilk. This standard seat now sits at 830mm and can’t be lowered on a rachet system like some; instead, Ducati offers a lower seat option of 810mm as well as a suspension lowering kit that drops seat height again to 790mm, while a higher 850mm seat option has been added to the catalogue for taller riders. 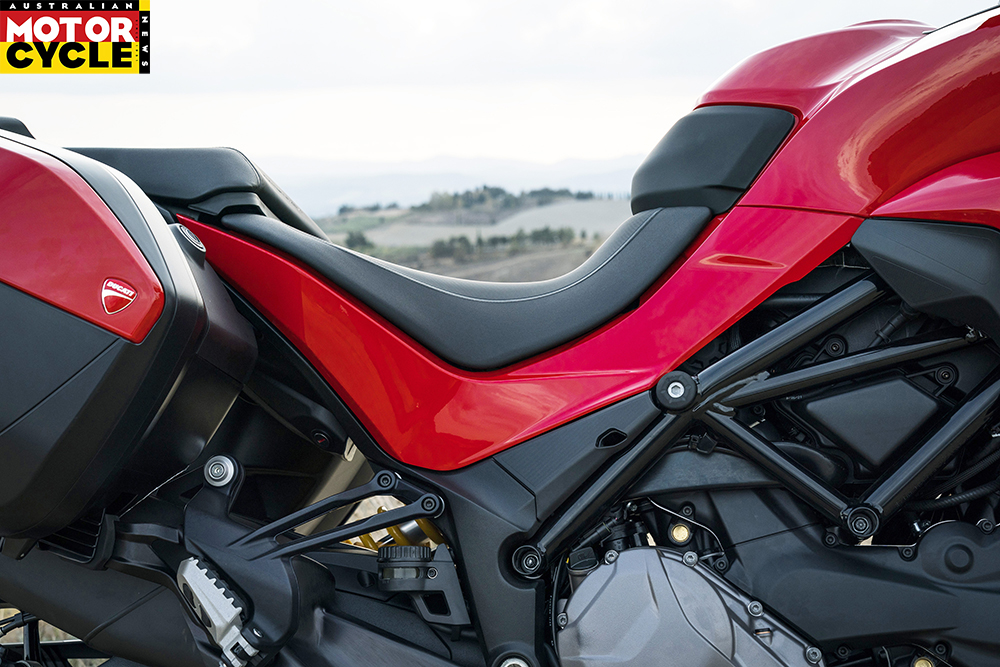 We’re told the first section is mild off-road, and it’s suggested we try the Enduro riding mode. It’s a slightly surreal sensation as you feel the electronic Sachs suspension rise slightly in readiness of the tough terrain. Ducati has fitted new Multi V4-style mirrors to the V2 and my first off-road observation is how the curvature of their stems means your forearms aren’t impeded when you stand up. The manually adjustable screen is, on its lowest setting, just about low enough to peer over in the standing position.

The Multi V2 is no 21-inch-front-wheel off-road hotshot, but can certainly take on some challenging terrain. And now, when you come to a standstill, it’s easier for feet to reach the uneven surface, which inspires confidence, especially for short or inexperienced riders. There is a limit, of course, as the road-biased ’bar is set too low for prolonged or technical dirt adventures and I’d want more room around the ’pegs for my heels, especially on the right side which is slightly restricted due to the exhaust. 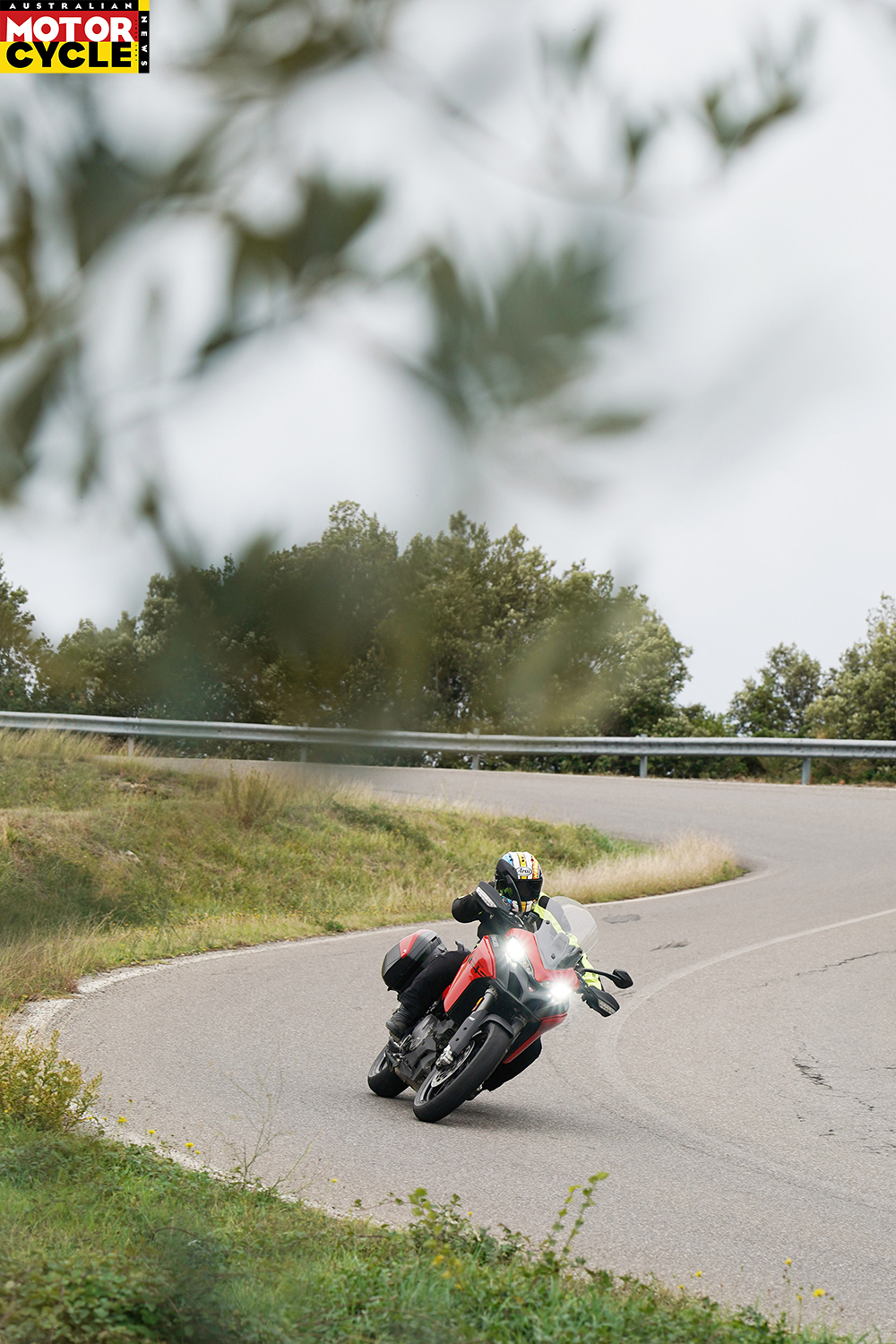 Leaving the dusty trails behind, and it’s a quick flick into Urban mode, which behaves like a wet mode with relatively early intervention from the TC and ABS (most welcome given my bike’s dirty tyres). The Tuscan roads are smooth and flowing in the countryside but very tight, twisty and usually cobblestoned in picturesque villages that cling to the hillsides – and the V2 is in its element in both.

The fuelling in Urban mode is softer than a hug from Santa and tickling the throttle results in a seamless and proportionate response from the 937cc Testastretta 11°. Forget about any horror stories of snatchy V-twins of old, this one is smoother than the Fonz. 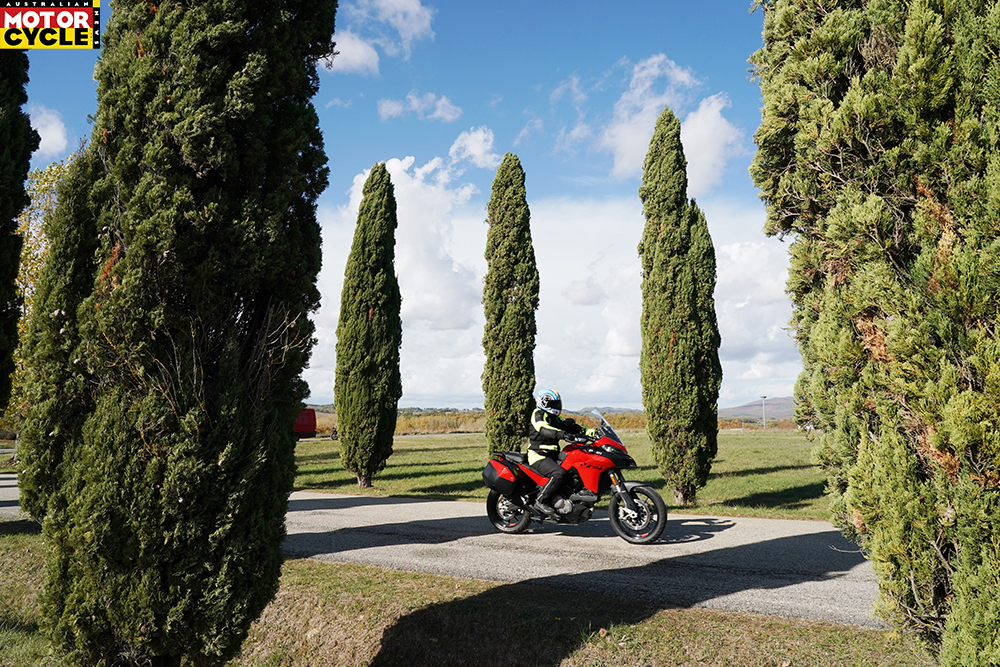 The clever Sachs semi-active suspension (S-model only) is now on a noticeably soft setting, exerting control over speed bumps and ironing out those cobbled surfaces nicely. New riders will adore the V2’s balance and calm at slow speed and now, thanks to that narrower and lower seat, how easy it is to bring to a standstill, especially when stopping on a cambered road and with fully loaded panniers.

Leaving the historic villages behind, the roads open out as we head into the Tuscan hills. This time I flick into Touring mode – easily done on the move with a closed throttle – and again the changes in the Ducati’s performance and suspension are instantly notable. The set-up is still on the soft side but the fueling is more aggressive, with what appears to be more power to play with. 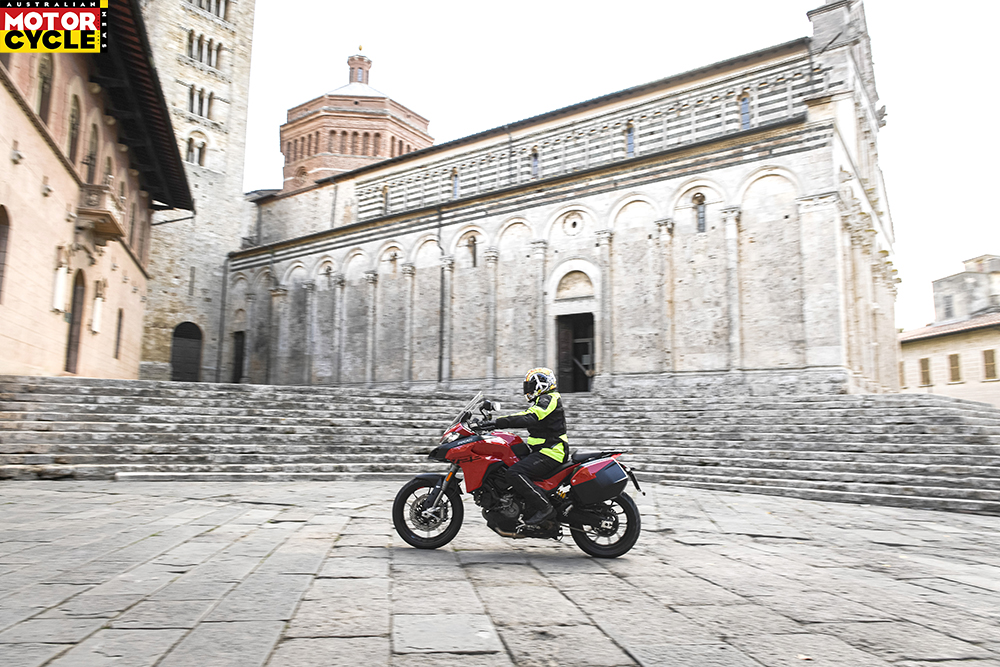 On the open road you begin to get a flavour of the 83kW (113hp) twin. Despite being Euro 5 compliant, there is a pleasant bark to the engine and exhaust that makes the ride even more rewarding. An up-and-down quickshfiter that’s standard on the S model adds to the acoustic experience as it cuts the ignition – and is noticeably smooth and effortless, too. Ducati has made clutch actuation easier and the eight-plate unit is lighter but it’s rarely used.

Riding into the Tuscan scenery, the V2’s chassis begins to reveal its capabilities. Ducati has reduced the new bike’s weight compared to the 950 – most significantly its unsprung weight by using wheels from the Multi V4 – which in theory should allow it to steer quicker, but the added bulk of my fully-loaded panniers pretty much cancels out any obvious new sportiness. 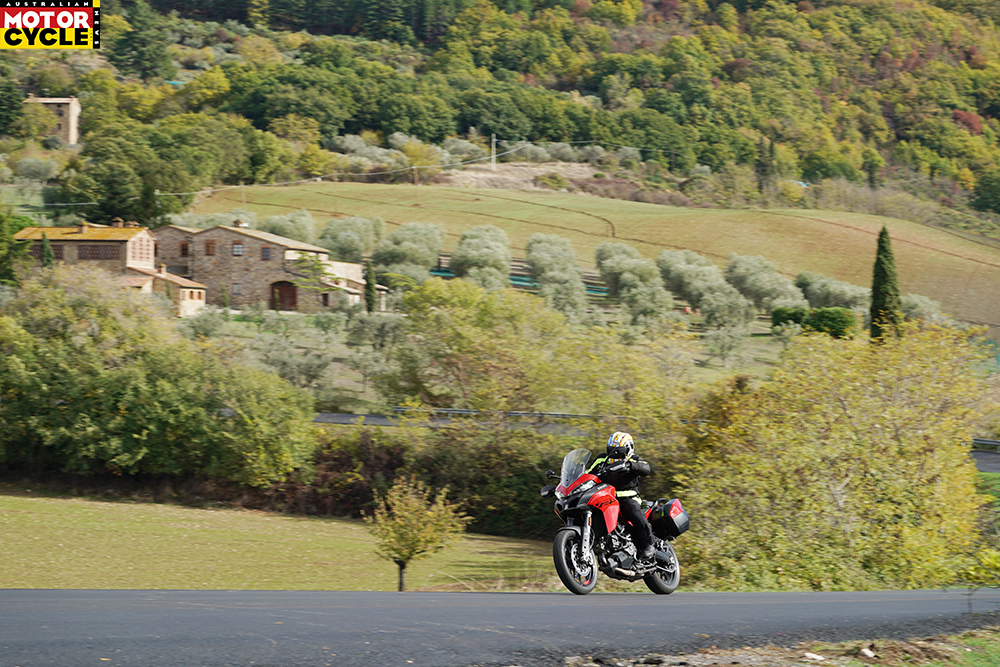 Despite all that baggage, the Multi V2 is more than happy carving up the endless twists and turns of the stunning backdrop. I can feel the Sachs ‘skyhook’ suspension working, controlling the fork dive, reducing the rear squat, making the ride as smooth and effortless as possible. It feels really high quality and as plush as you’d expect from a $25,190 (ride away) Ducati.

In the mixed weather conditions, I am thankful for the Ducati’s advanced rider aids, both the lean-sensitive traction control and ABS. The majority of corners are wet, with some dry – a real mixed bag of grip and surfaces – and it’s comforting to have such effective electronic back up which, like the rider modes, can be tailored to match the rider and conditions via the dash. 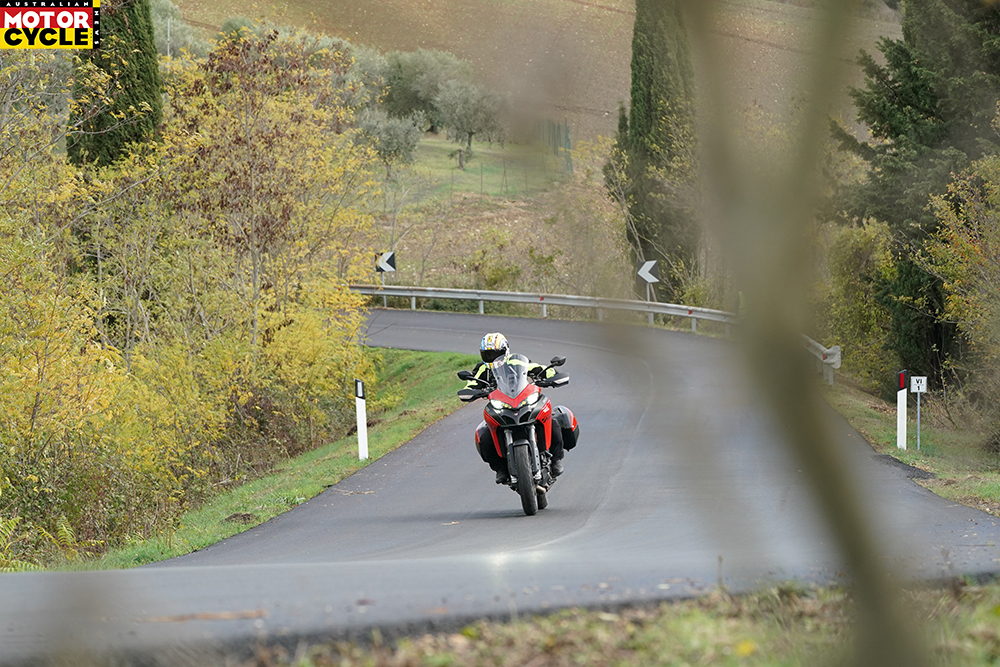 As the sun rises higher and the road dries out, I eventually opt for Sport mode. After all, this is a Ducati that comes from the same factory as the MotoGP missile which has just taken the constructors’ title again.

Once again there is detectable adjustment to the chassis and the reaction of the semi-active suspension. This time there is less travel, the chassis feels more taut, the body of the bike moves less – particularly when I start to ride hard. 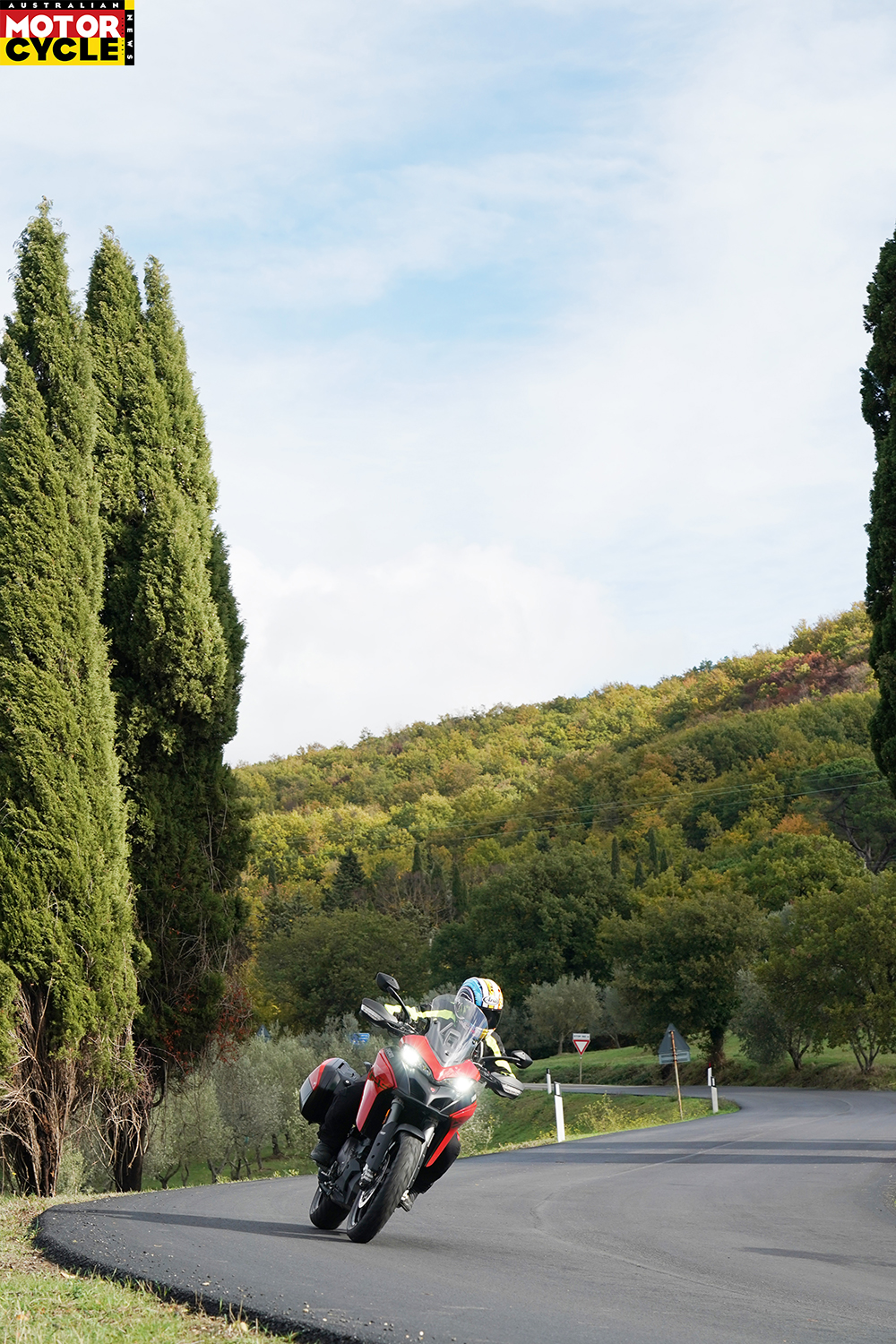 It’s peak of 83kW may not appear like a lot of power, especially when it’s pushing 225kg (plus loaded panniers and rider) through the air, but I never feel short-changed by the ‘entry-level’ Multi. There are gratifying amounts of torque and drive lower down, followed by a clean and satisfying spread of power. I never really get the opportunity to explore all of the engine performance as the journey is about enjoying the roads, not doubling the national speed limit.

But power is unintimidating and easy – and you’d only want more for high-speed touring on German autobahns, two-up and fully loaded with luggage. In fact, with the TC deactivated and now chasing crazy Italians on their local roads, the Testastretta motor is more than enough, even allowing the front wheel to lift on occasions. 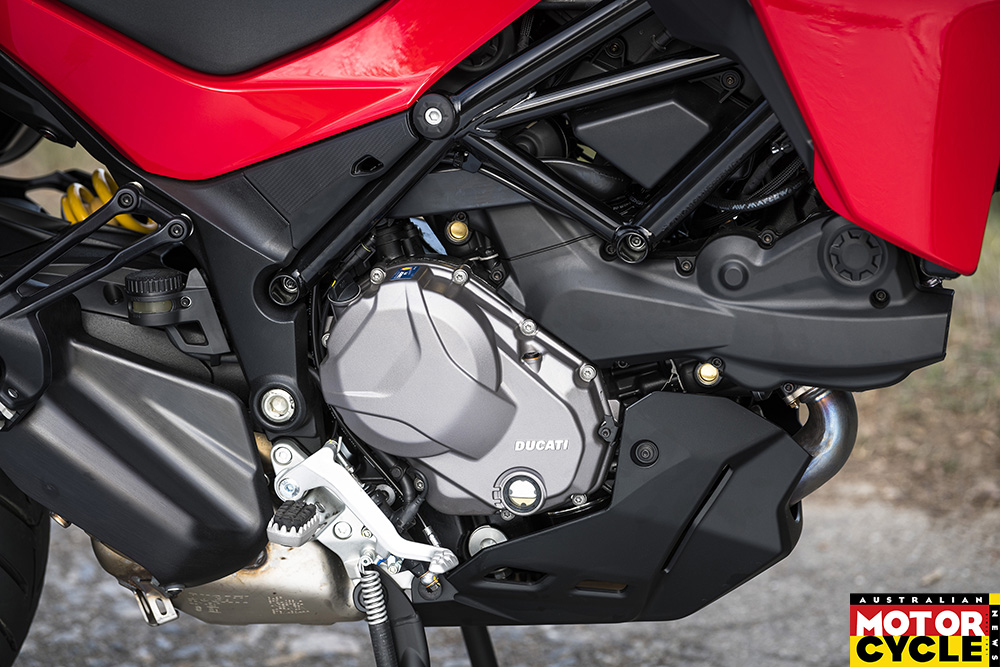 Day two is a little cooler so I opt for setting two (from three) on the optional heated grips, which are on a separate button on the right ’bar, not within the menu. (The grips, centrestand and panniers are all extras as part of the Touring model, starting at $27,280 ride away). I also reinstate the TC – removed last night as the locals upped the pace – to Sports mode on its minimum setting, just in case. Again, this is all simple and intuitive.

I also make time to play with the cruise control, which is fitted as standard and operated via the left ’bar, and the manually-adjustable screen. The cruise control is simple to set while the screen offers sufficient wind protection and low buffeting for most rider sizes. My only niggle is the wind noise, which at speed is slightly noisier than expected. 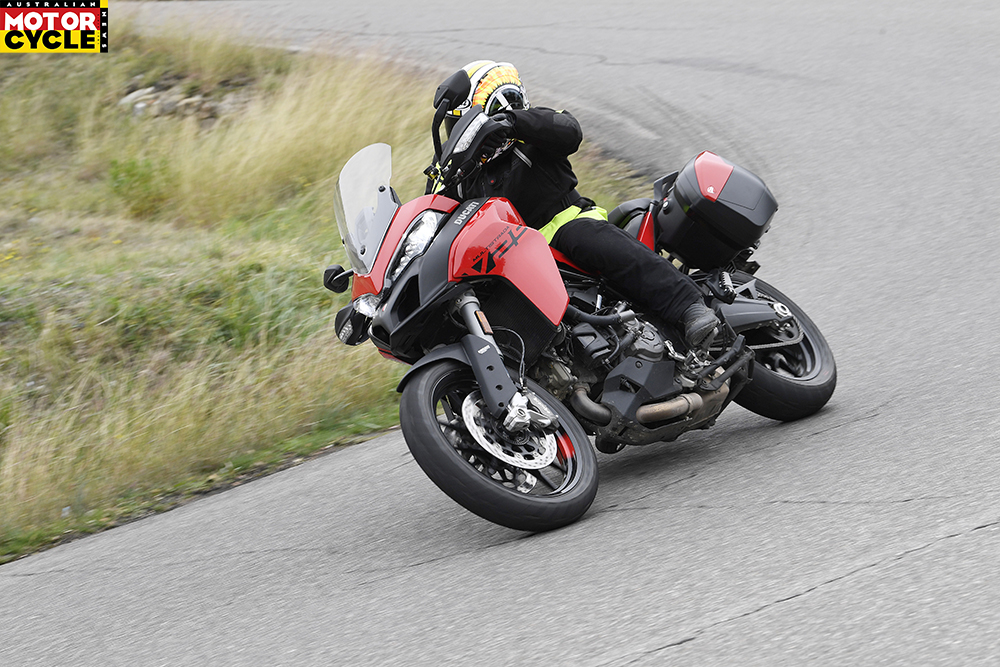 But after two days of riding, no body parts are complaining and comfort simply isn’t an issue. The engine has proved frugal, returning 5.1L/100km and 5.3L/100km between my two refuels, which equates to a range of 380-odd kays. Three uninterrupted hours in the saddle shouldn’t be a problem.

After two days of epic riding, I asked myself why anyone would want more. If I was to repeat the trip, I’d choose the same bike again – the new Multistrada V2 is that good. For super-fast touring in Germany you might reasonably want the Ducati Multistrada V4, but for most, the twin will be more than sufficient. In terms of performance, spec and quality, it feels anything but entry level. 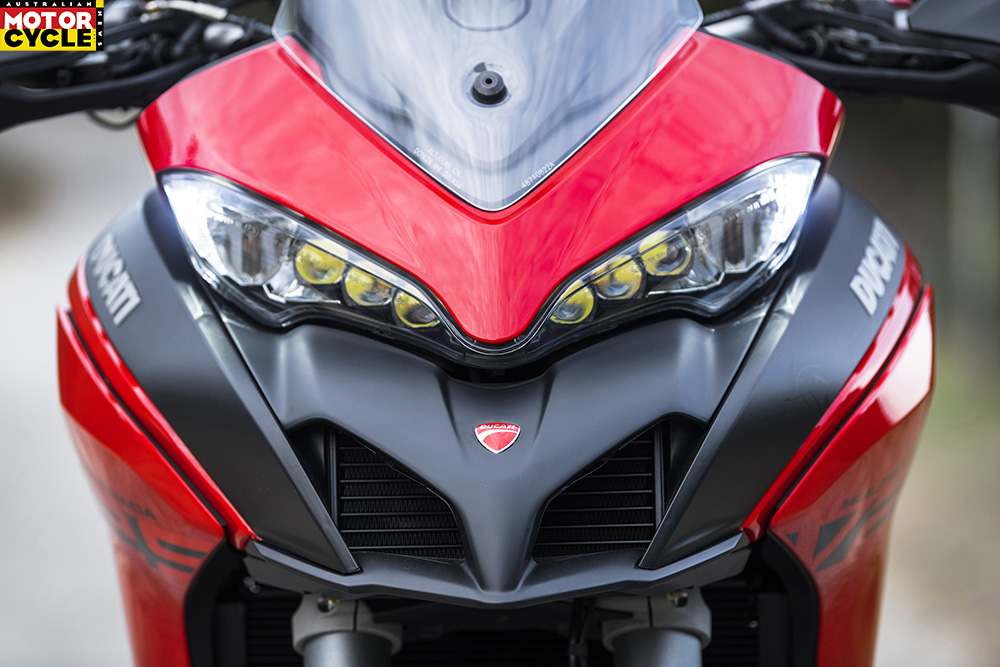 This Multi isn’t a massive leap but a significant model for those who are perturbed by big adventure bikes. It is far more accessible than the existing bike, and deserves to attract a new and younger audience. Who doesn’t know someone who loves the ergonomics and protection offered by adventure touring machines but who are put off by their weight and size?

The elephant in the room is the price, especially for younger riders. The base model is an attractive $22,539 (ride away), but an S model loaded up with the Touring extras, which adds plenty of versatility, you push that price out to well over $27K.

For that, however, you get Ducati styling, quality and character plus a high level of performance and handling, and excellent rider aids. It’s a competitive market, but the new V2 should carry on the success of the now old 950 as it’s now more appealing to a larger audience than ever before. 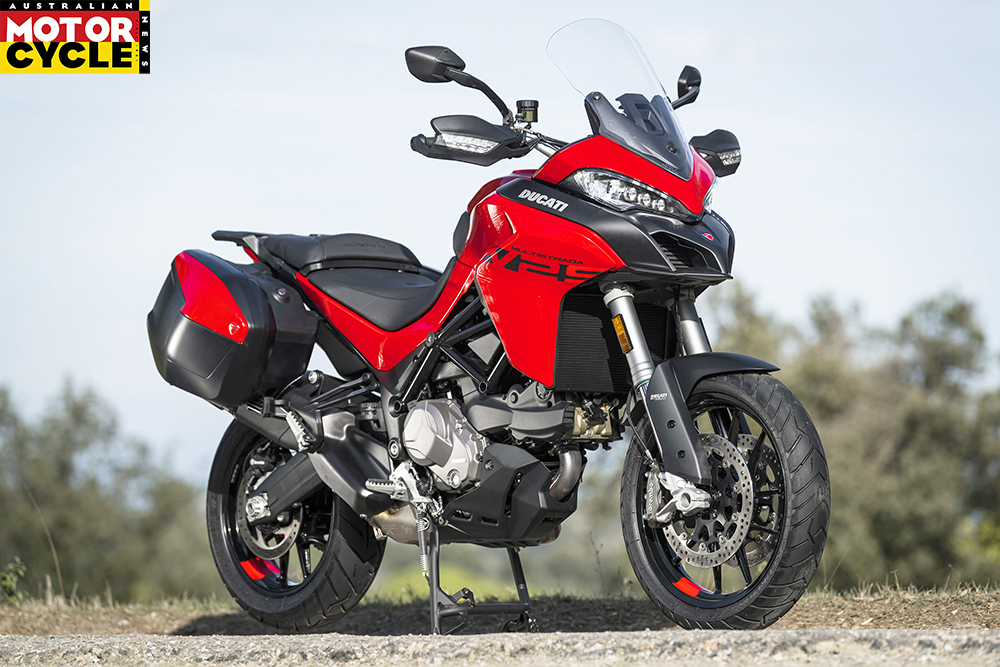