Ahead of the bike’s official launch, we grabbed an exclusive test ride on the new Harley-Davidson Nightster

Unable to meet ever tightening emissions regulations, the long-toothed air-cooled Sportster was dropped from the Harley-Davidson range, leaving a huge hole in the brand’s line up. But now, 65 years after the first Sportster, Harley has introduced the Nightster to fill that hole. 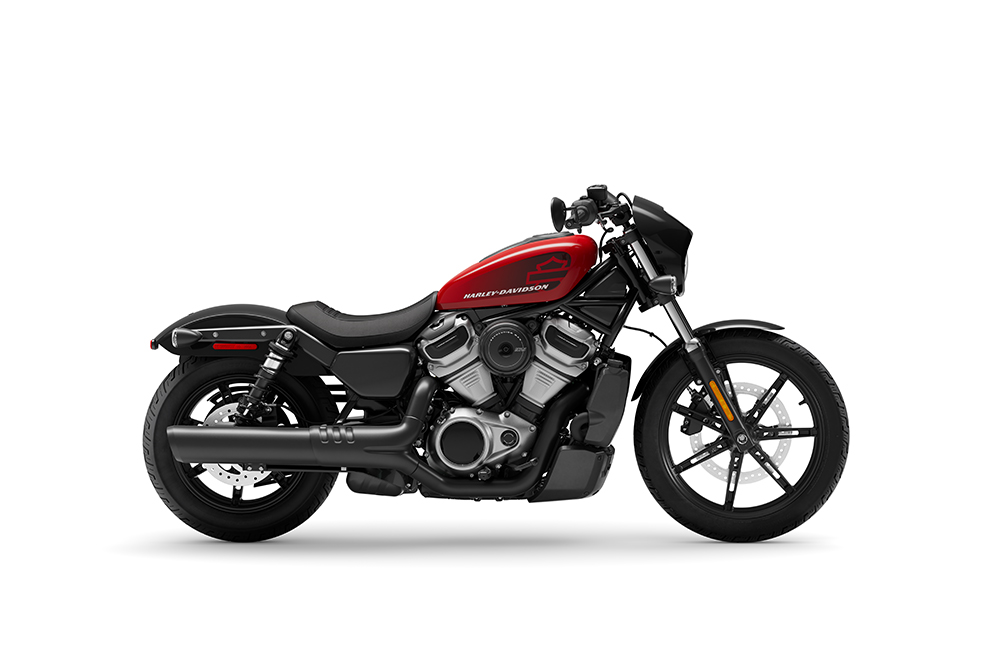 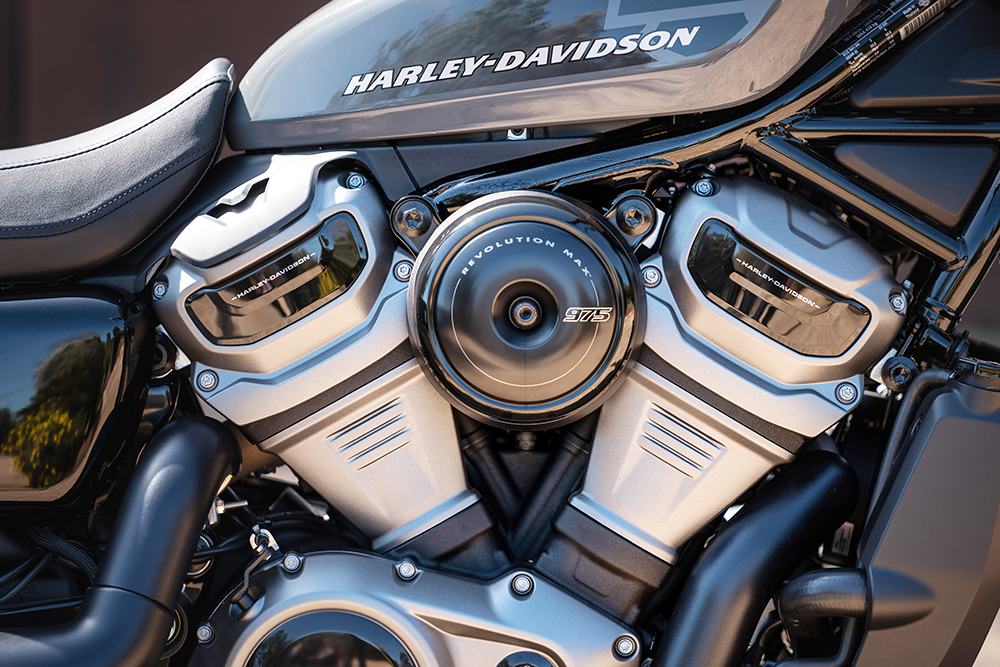 But it’s not just about the engine (whose liquid-cooling will certainly ruffle the feathers of air-cooled enthusiasts). The Nightster comes with a new chassis, Showa suspension, multiple riding modes, traction control and ABS. And while the design may shadow the lines of previous Sportsters – 19-inch front and 16-inch rear wheels included – what looks like the fuel tank is actually a cover for the airbox, with the real 11.7L tank stowed under the seat. 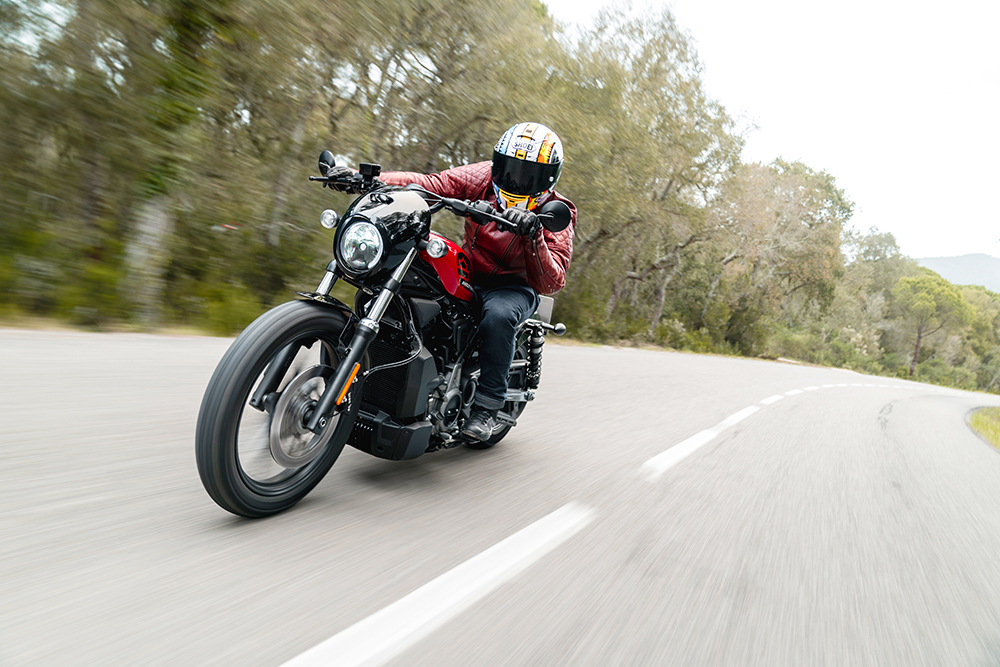 With 89hp at 7500rpm and 96Nm of torque at 5750rpm, the Nightster makes a significant jump forward compared to even the larger air-cooled Sportster 1200, which only managed 60hp. It even produces more power than some of the big-cube, air-cooled bikes in Harley’s range. 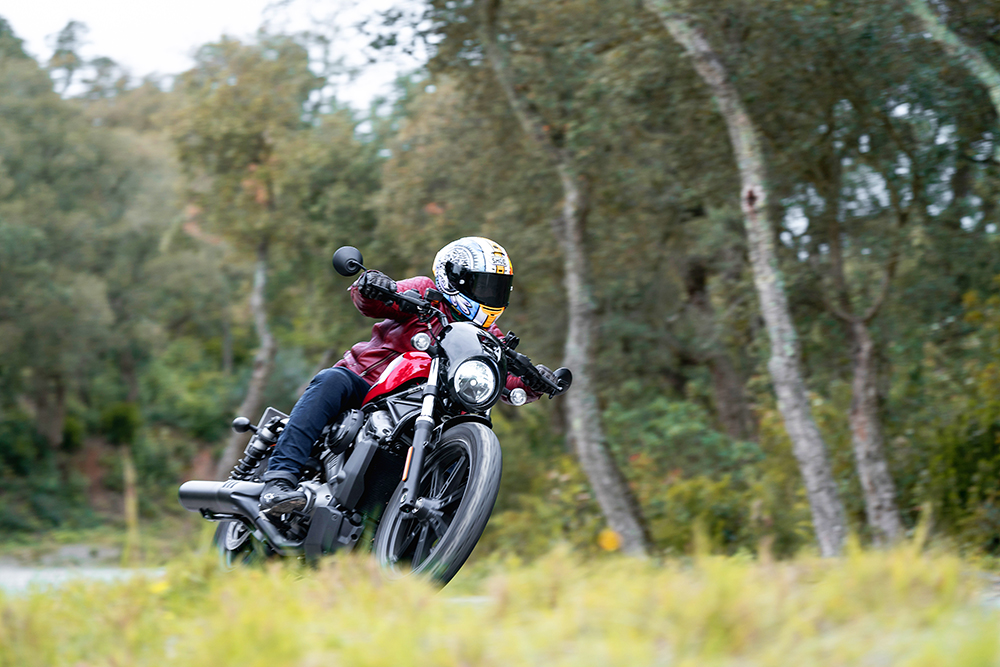 The 975cc V-twin is essentially a de-tuned and downsized version of the Revolution 1252 engine found in the Sportster S and Pan America. This is done via a smaller 97mm bore and shorter 66mm stroke (down from 105mm and 72.3mm respectively). There are also changes to the intake and exhaust, with variable valve timing now only on the intake side. 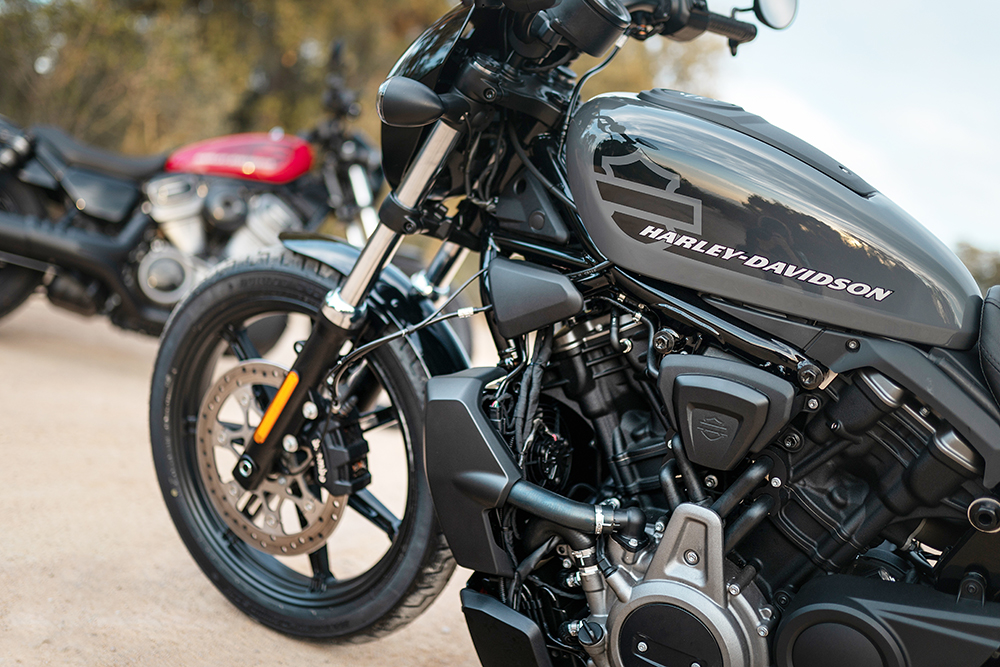 There are three riding modes to choose from: Sport, Road and Rain. Each mode changes the rider aids, while Rain mode reduces peak power by around 15 percent. In standard Road mode there’s a rev limiter that won’t allow you to blip the throttle past around 2500rpm in neutral. So if you want to hear the new motor rev, you can’t do it at a standstill unless you select a gear and hold in the clutch… 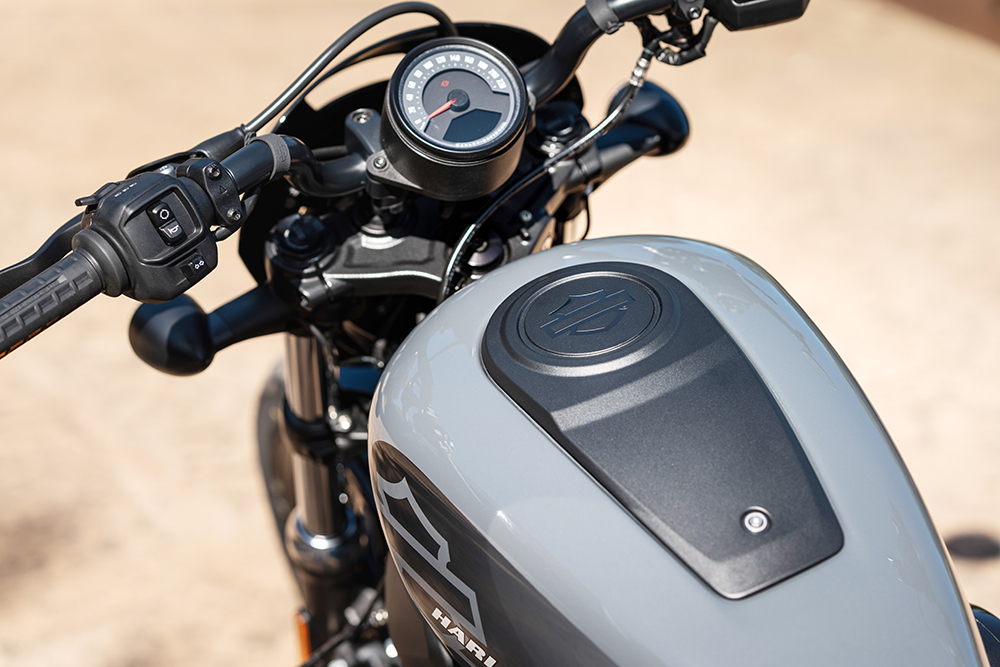 I immediately felt at home on the Nightster. The gearbox is fluid, not like the clunky transmission of old, and both levers are span adjustable, not the huge chrome levers of the past. The fuel injection, however, is a little sharp and snatchy for low-speed riding. More miles and a thoroughly warmed motor don’t improve things much and, while the Nightster’s fueling can’t be described as bad, it’s not in the same league as that on KTM’s and Ducati’s big V-twins. I would give it eight out of 10, and that is being generous, while in Sport mode it scores even lower as the throttle response is intrusively snatchy. Admittedly, you’re unlikely to spend much time in Sport mode at town speeds – and the throttle is soft and forgiving in Rain mode – but I gave up with Sport and stuck to Road. 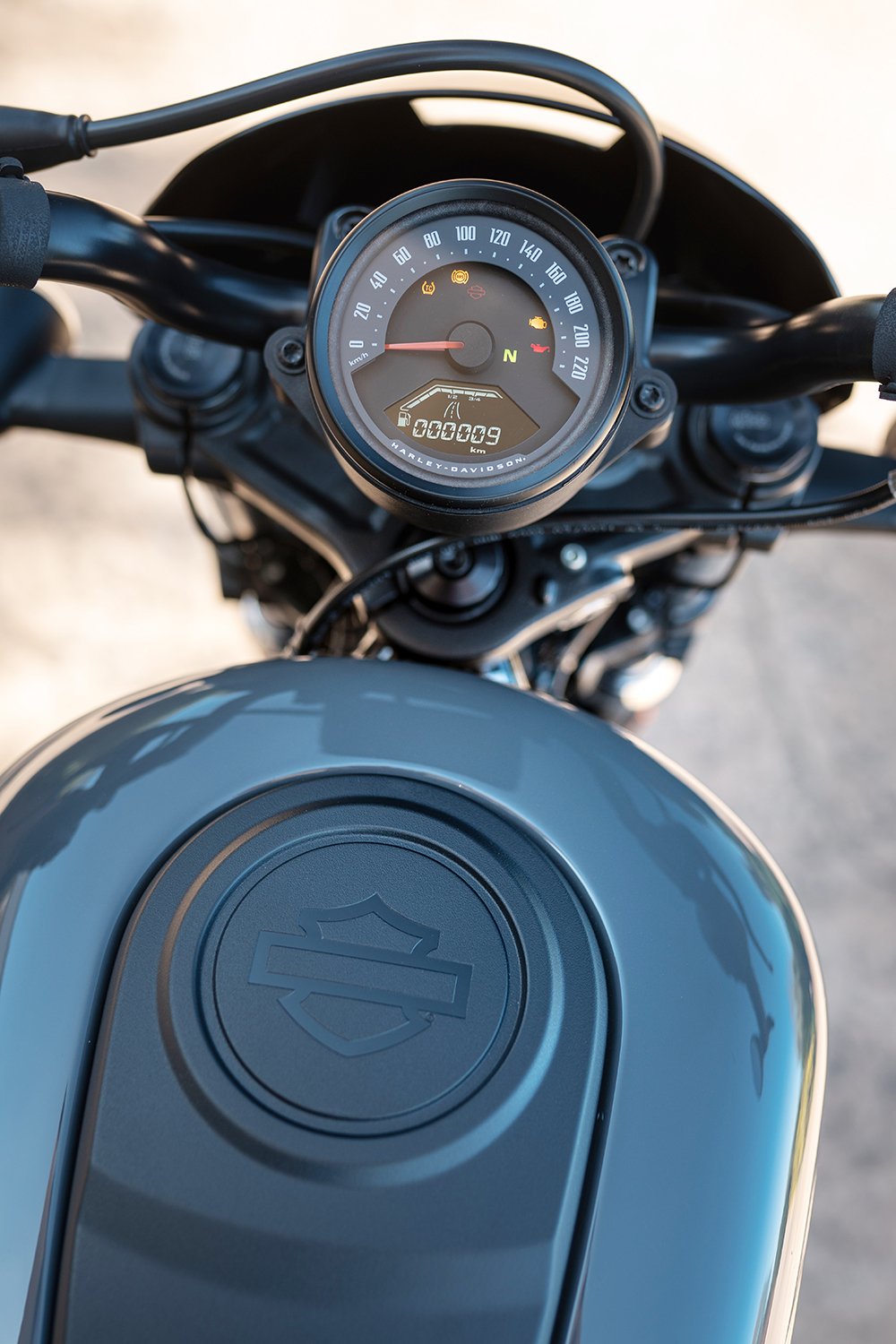 Fueling aside, the 975cc V-twin impressed me. On one hand, you can ride the Nightster like a traditional Harley, short-shifting through that easy gearbox, enjoying the torque, and riding progressively and relatively briskly. Or, if you’ve come from a sports background, hold onto a gear and let it rev. Peak power is at 7500rpm, max torque at 5750rpm, but the Nightster will over-rev to 9500rpm – and it appears to enjoy it. The kick of power between 6000rpm and 8000rpm is a welcome addition for sports fans; yes, the Nightster is sporty in a way the Sportster never managed. And while nearly 90 horses from a water-cooled V-twin isn’t going to impress your mates down at the pub, I wasn’t expecting this eagerness and willingness to rev from a Harley either. It makes it far more fun than the old air-cooled 1200, and kicks sand in the face of the underpowered 883. 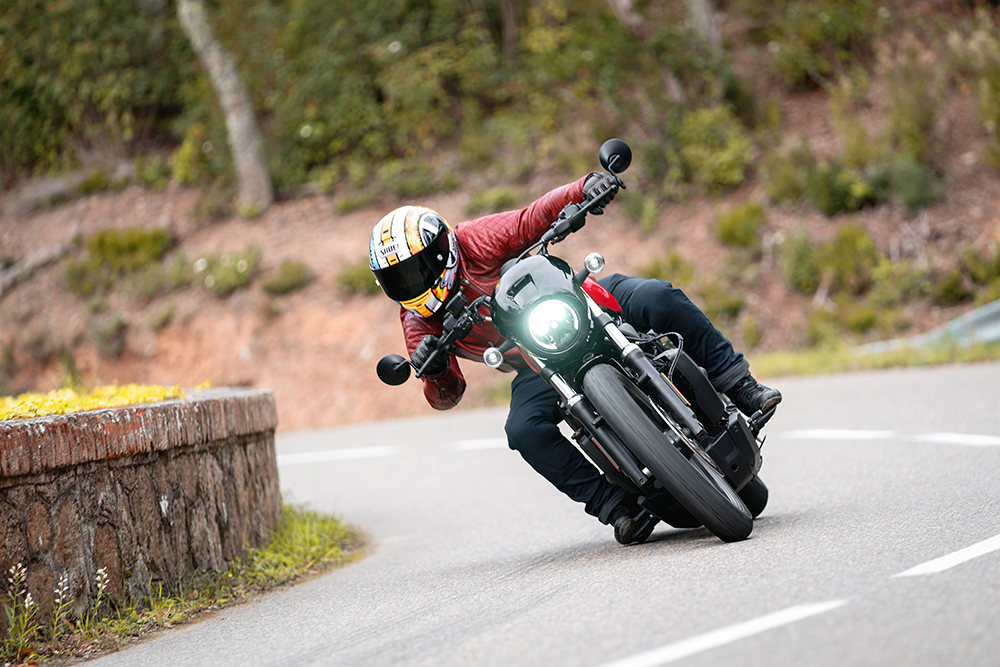 Accelerating out of slow corners or roundabouts is now great fun. Turn off the traction control and there is enough torque to light up the rear tyre, just, and it will continue accelerating past a displayed 160km/h with a degree of nonchalance. What’s more, there’s handling to match. 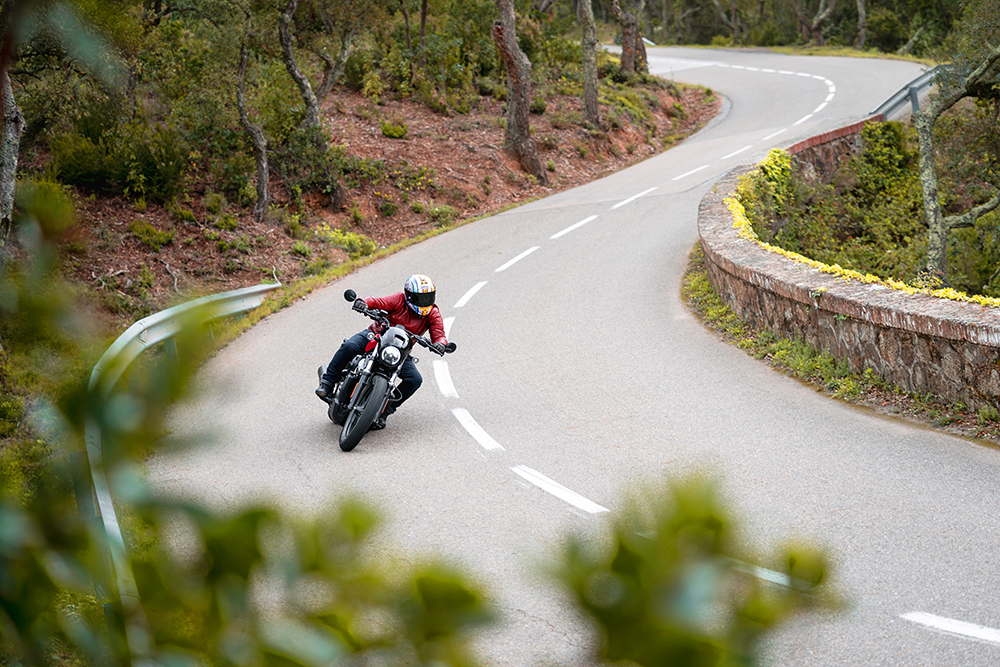 Harley has saved weight (the 1200 air-cooled weighs 264kg compared to the Nightster’s 221kg) and, interestingly, moved the centre of gravity lower with the fuel tank now under the seat. H-D has also listened to criticism and improved the ground clearance. The old, discontinued Sportster could never objectively be described as sporty as its handling limitations, especially the lack of ground clearance, were all too easy to find. Now, those limitations have been attended to, and while the ’pegs and eventually the exhaust will touch down, it takes some determination to make it happen. 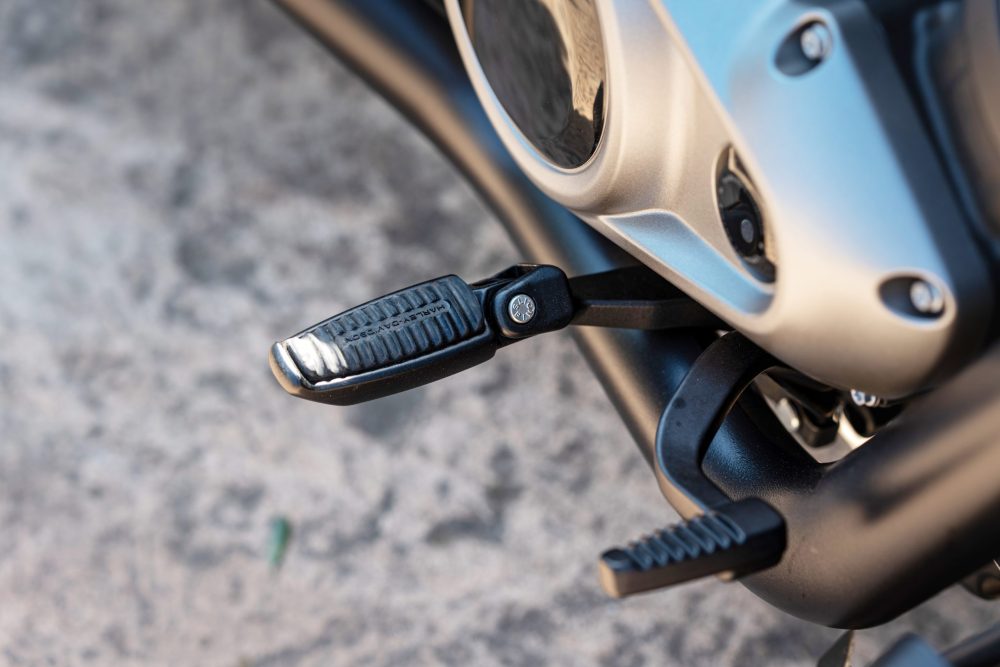 Of course, this is no trackbike but the combination of 19-inch front and 16-inch rear wheels and 221kg somehow works. The Nightster is slow steering by normal standards, especially during fast direction changes at speed, but this is only noticeable when riding outside the bike’s design window. For a spirited ride, it’s hard to fault – its new-found agility and easy to achieve lean are both attributes alien to most Harleys. Add this much-improved handling to the now fun motor, and the result is a truly sporting entry-level Harley. 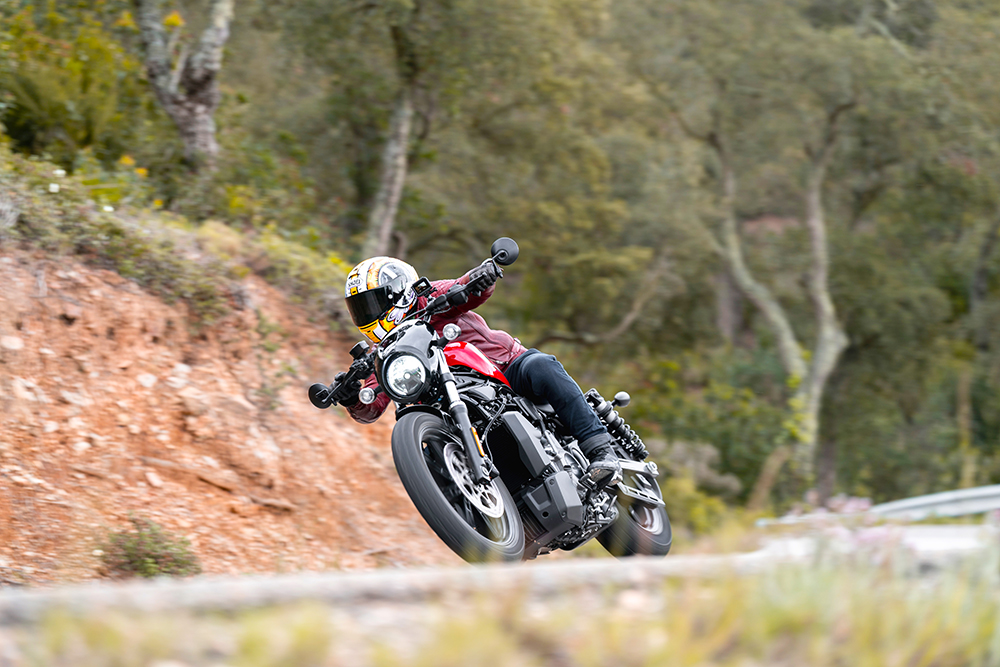 While the Harley-Davidson-badged (Dunlop) tyres will probably last forever, they’re on the hard side. Grip wasn’t an issue in the dry at least but, when you’re riding sportily, the rubber does lack outright feel. But TC and ABS come as standard should you get a little carried away. 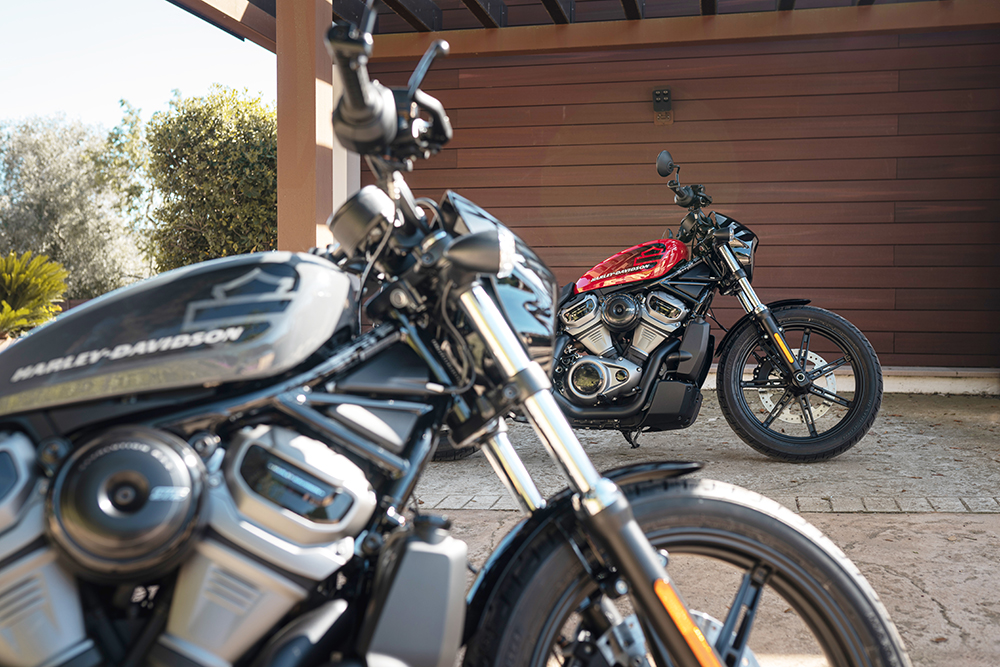 The single Brembo stopper is just about up to the job, and there’s a nice, progressive feel to the brakes. The back brake is strong, and there’s also Drag-Torque Slip Control System (DSCS), or engine brake assist to me and you. Most of the test was on tight twists and turns meaning I didn’t get the opportunity to brake from high speeds. The ABS is not lean-angle sensitive and is relatively basic – at times I could feel it actuating but it wasn’t alarming. 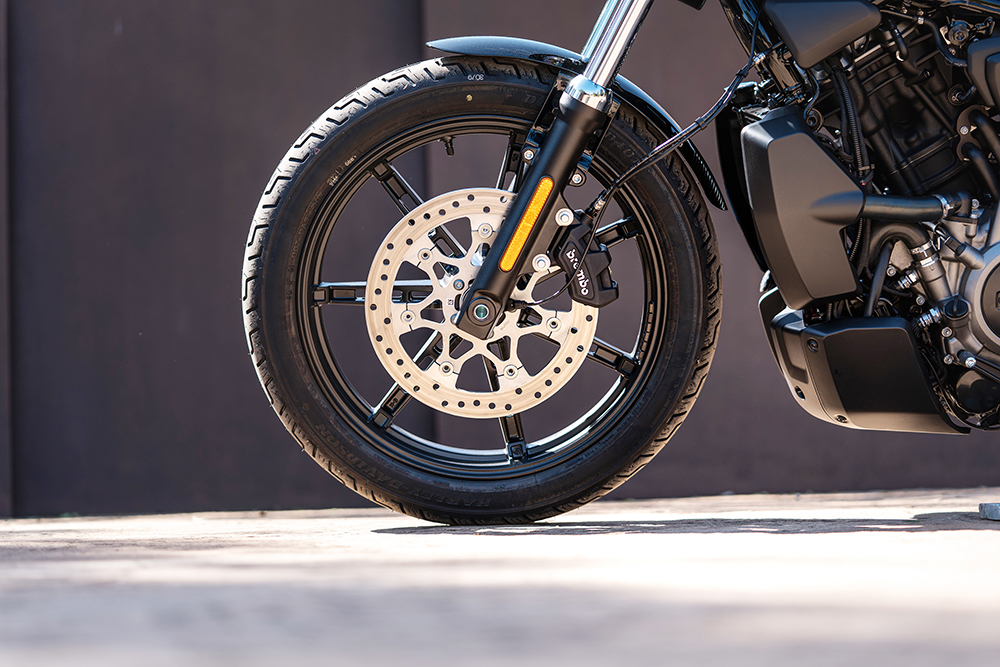 The Nightster also comes with a switchable traction control system and that engine braking control system to prevent rear-wheel lock up on downshifts. None of these electronics are IMU actuated and, for the asking price, I was certainly expecting cornering ABS, which now comes on many smaller-capacity bikes. 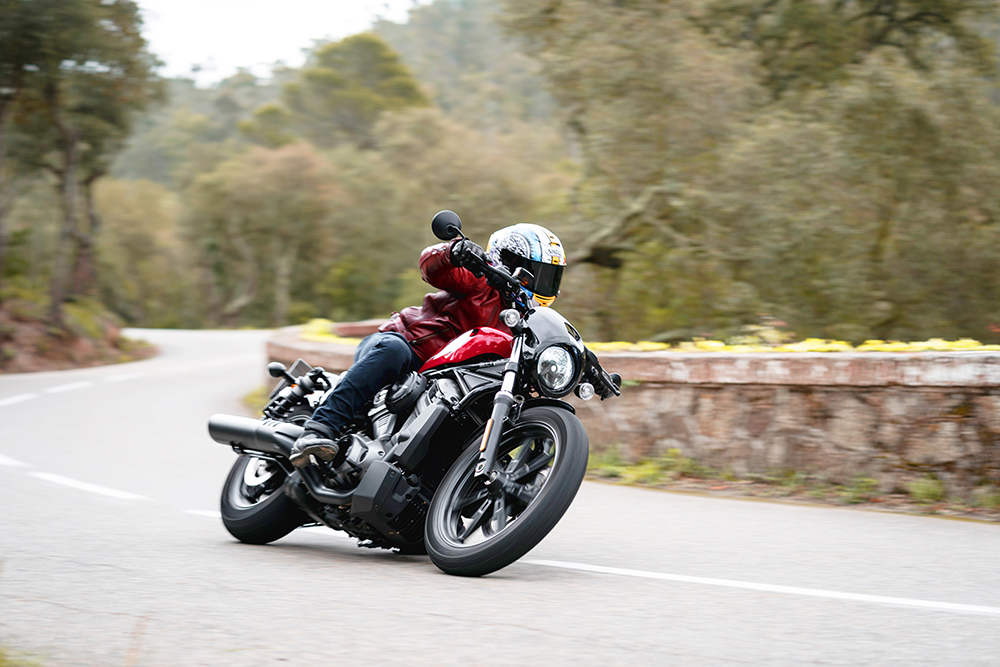 Despite the lack of sag in the short-travel rear suspension, comfort is impressive. And the Nightster appeared to accommodate most of the human shapes and sizes riding on test, though a screen would be needed for serious touring, and there’s no cruise control either. 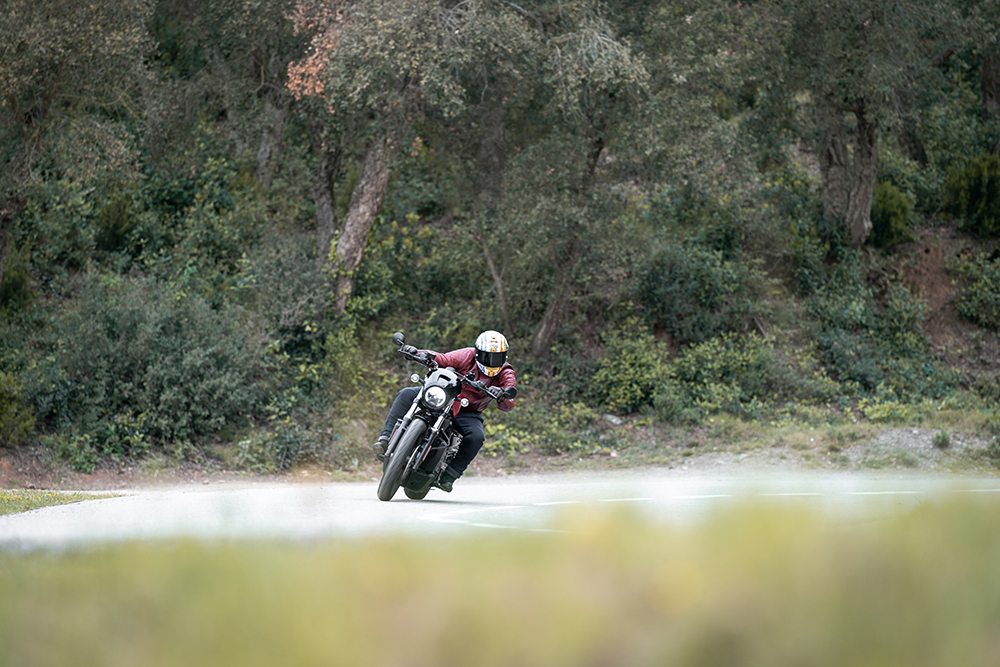 Fuel consumption is quoted at 4.24L/100km, enough for a potential range of 225km from the 11.7-litre fuel tank. We didn’t get to measure the range on test as we couldn’t visually confirm that the under-seat fuel tank was full before setting out for the day. According to Harley, most of the bikes on the test were hitting 190 kays before requiring fuel, and some riders completed the 102km ride to lunch with 70km of petrol remaining. 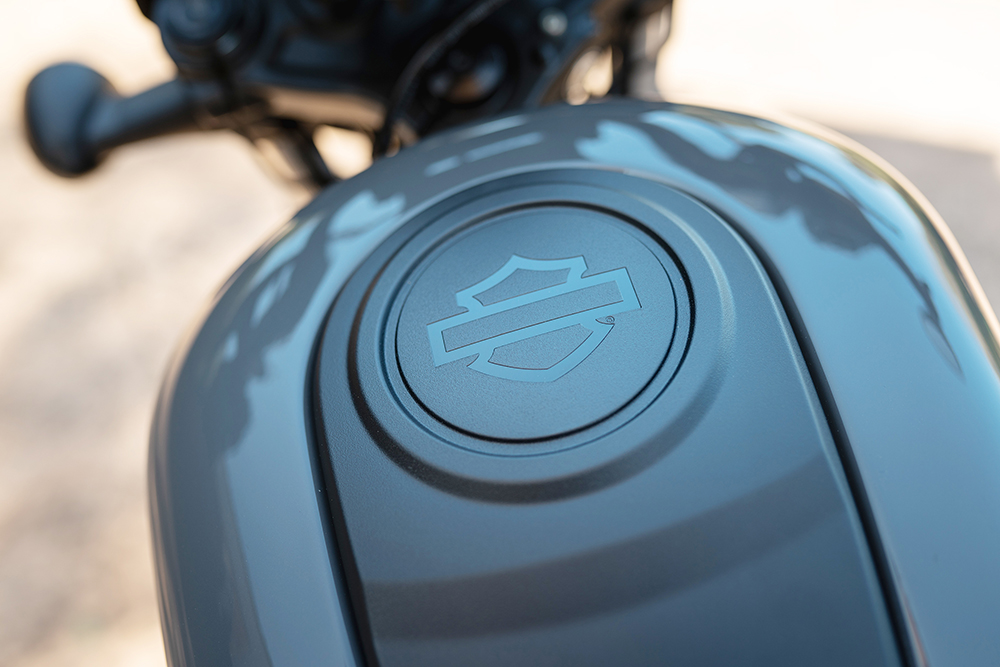 We have not touched on the all-important Nightster look. Traditionalists may disagree but I like the overall style and how easy it will be for owners to customise, but it’s a shame about the low quality of one or two fasteners. 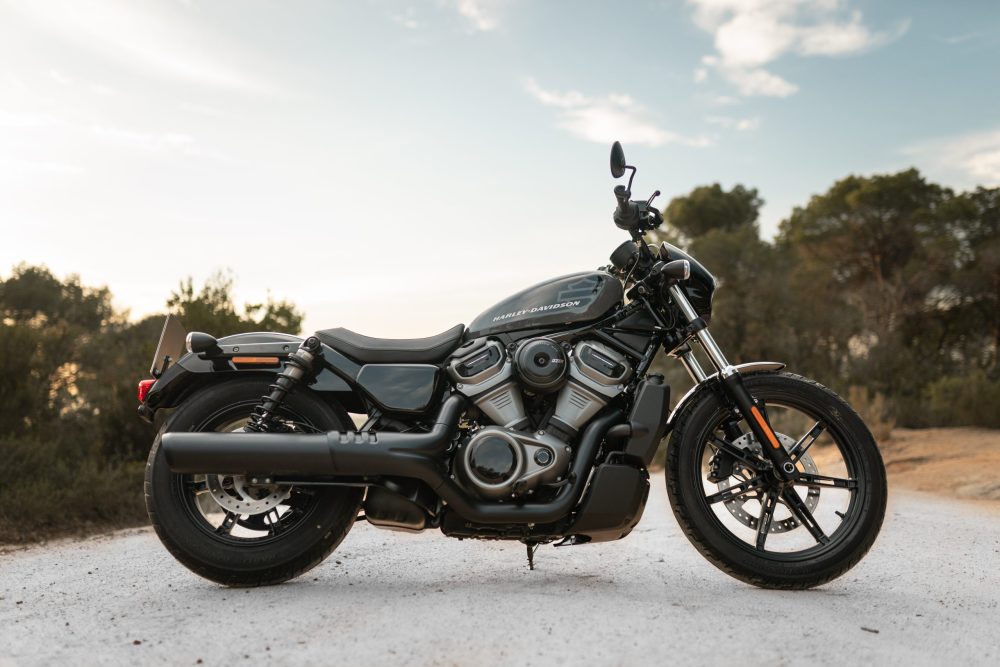 Looks aside, I can vouch that this is a big step for Harley-Davidson, particularly the fun and versatile motor, which is happy to play the easy-going role one minute and be a rev-happy sporty bike the next. It’s the same verdict for the handling, which is much improved over the old Sportster, and one of the best handling Harleys
I’ve ridden. 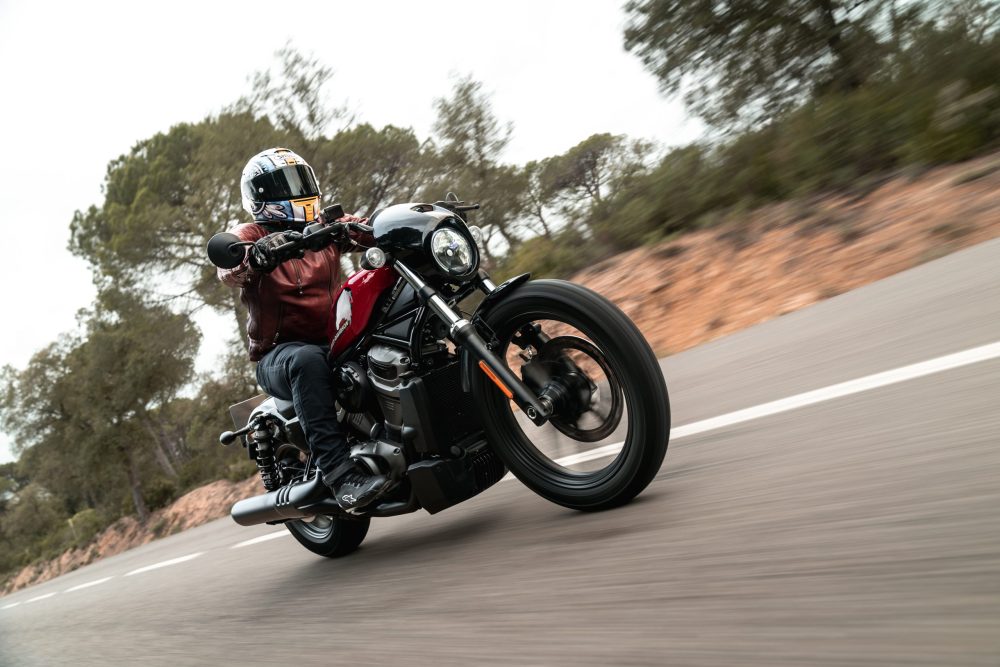 The fueling is average compared to the best V-twins on the market, and certainly don’t opt for the Sports mode at slow speeds. The rider aids are a welcome addition but, at this price, should they be lean sensitive? 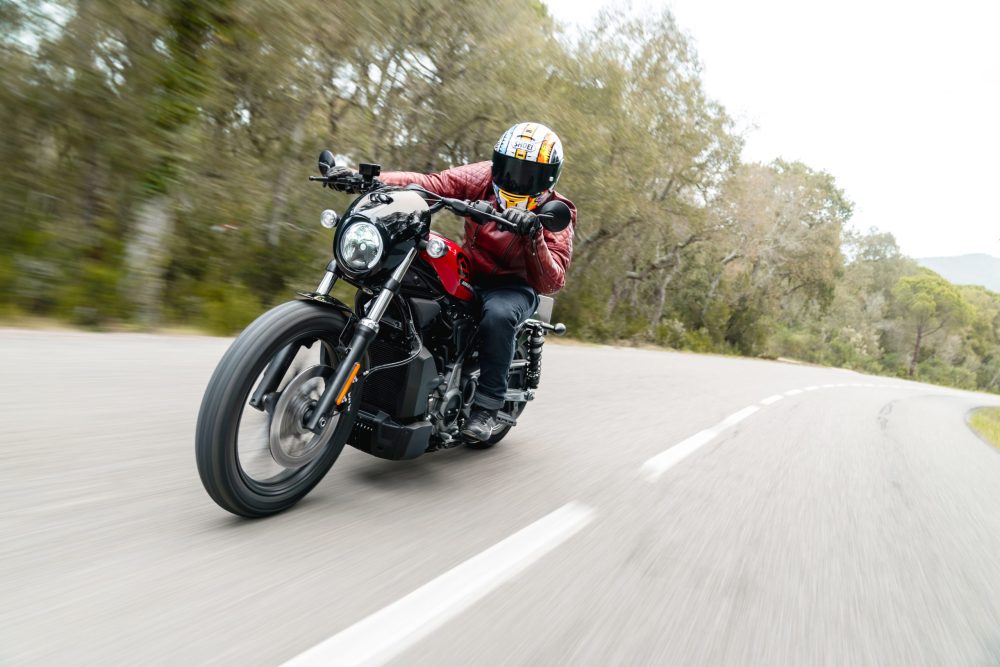 The new Nightster performs in a different league to the old air-cooled Sportster range and should be a hit with new Harley customers, but at close to $24K, it’s not a cheap way into this historic and iconic brand. And I’m unsure if air-cooled Harley-Davidson fans will instantly warm to it. 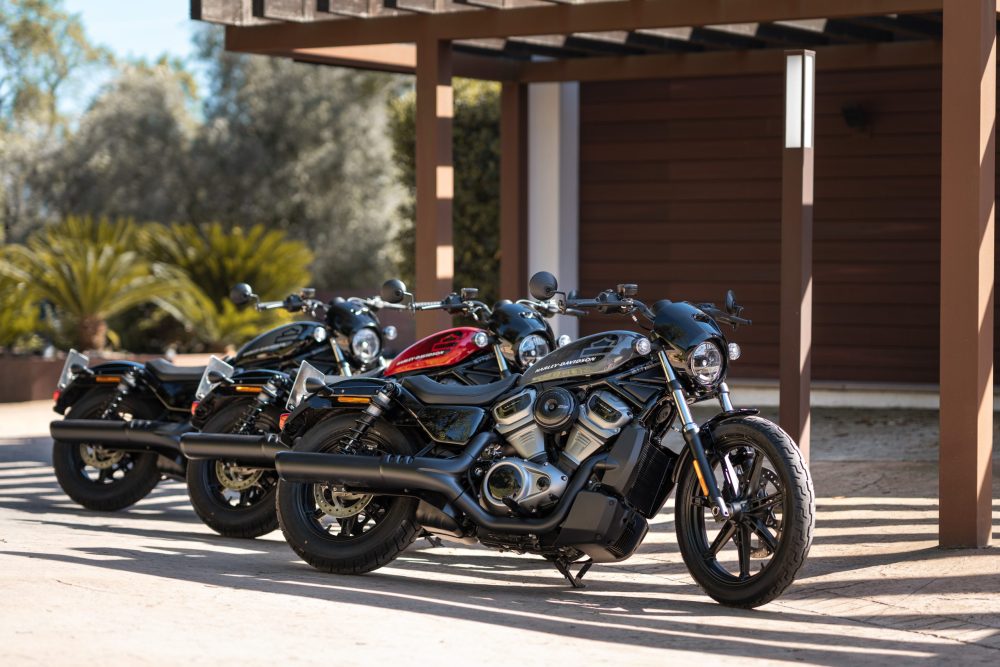