If your idea of the perfect vintage-look motorcycle conjures up thoughts of The Fonz, Steve McQueen or James Dean, the Triumph Bonneville T120 could be the bike for you

The motorcycling world is full to the brim with retro offerings these days. Even if it’s not your thing, it’s hard not to notice that every manufacturer and its dog has at least one bike masquerading as a retro bike. Some have done it well, others not so much, but after spending some time on the Triumph Bonneville T120, I’m convinced that this is probably the most complete package in the retro ranks.

I was looking forward to riding the T120, but no more than I’d look forward to riding anything else. I’ve ridden a bunch of retro-themed bikes and for the most part, I find them to either look authentic and ride pretty average, or ride well but the retro styling looks like an afterthought.

But after my first ride on Triumph’s T120 I was hooked, and not just because of its classic looks. The T120 has a good lick of old-school character, but with the abilities of a modern bike. Best of all, it’s uncomplicated and fun to ride, which in this day and age of 40 modes and backlit buttons, is refreshing. 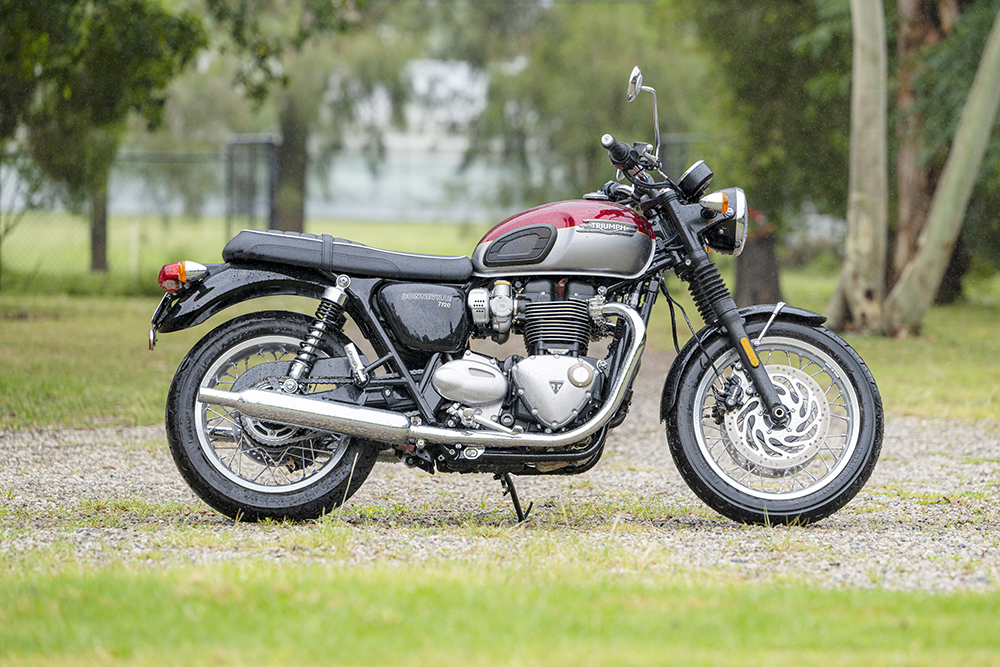 The T120 received a few key updates in 2021 with the liquid-cooled, eight-valve, SOHC, parallel twin now Euro 5 compliant. And despite this, Triumph has managed to keep the new model’s peak power and torque identical to the previous model. There’s also a new and lighter crankshaft, balance shaft and clutch, all of
which combine to reduce inertia and speed up throttle response. 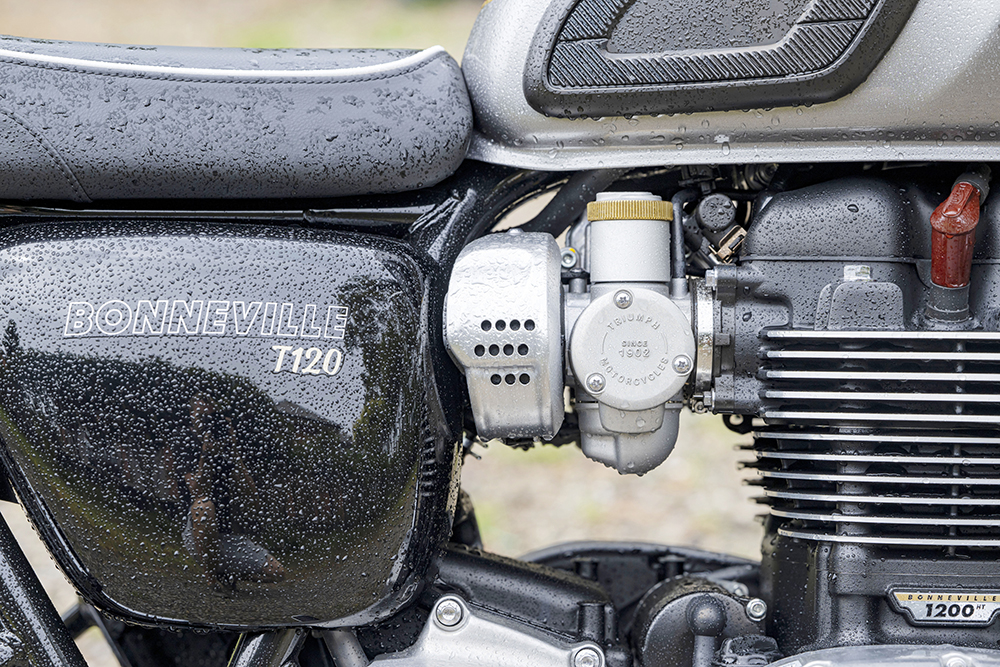 New lighter 32-spoke aluminium laced wheels reduce unsprung weight, with braking performance given a boost with new Brembo calipers and new rotors. The latest T120 also benefits from refinements to the two riding modes, the dual-dial gauges have been freshened up and cruise control is now standard rather
than an option. 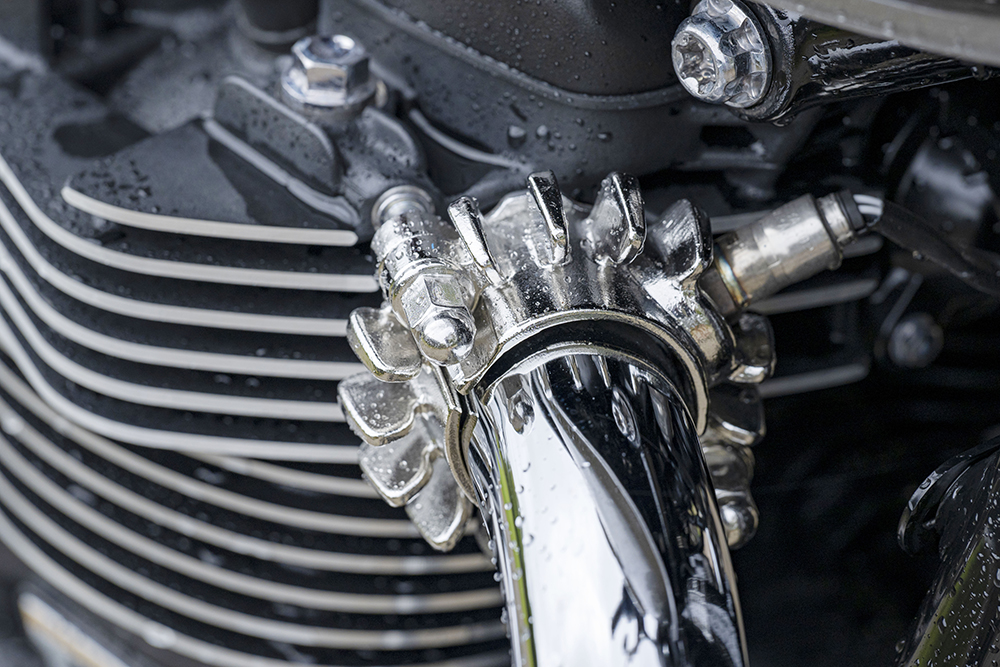 It’s easy to get distracted by the T120’s classic looks and relatively small proportions and forget that in between that tubular steel frame is a 1200cc parallel-twin engine – it just doesn’t feel like you’re on a large-capacity bike when you
first sit on it. 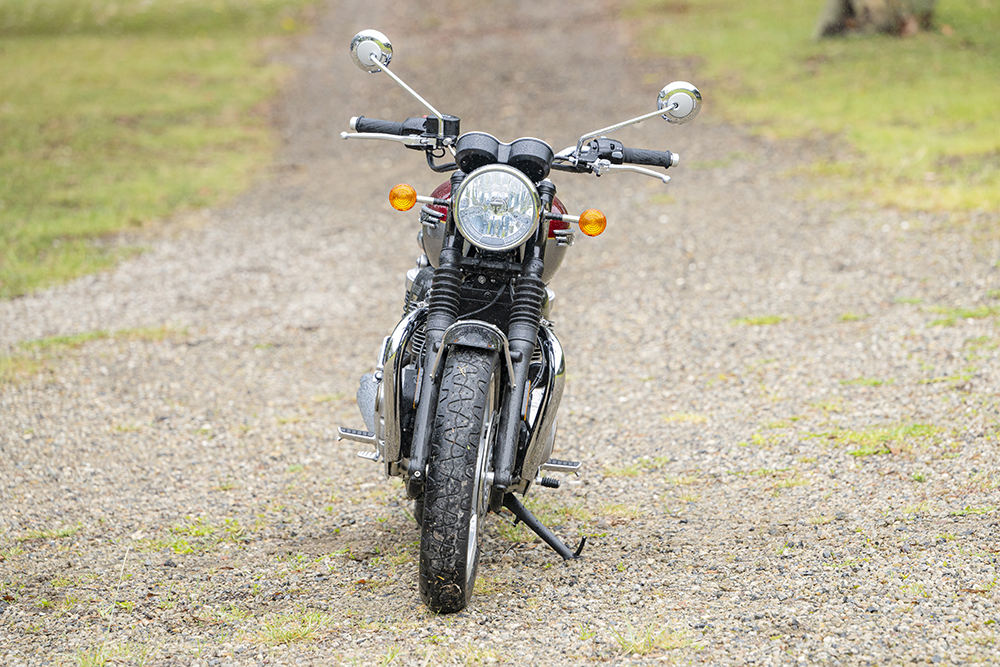 Even once you’re rolling, you’ll find that the eight-valve SOHC engine is a bit of a pussycat and likes to purr away, deceptively building speed without you even noticing. That’s not to say that the T120 is low on power – it’s not, the water-cooled twin can push out 58.8kW of power at 6550rpm and it really gets moving quickly. It’s just an ultra-smooth and progressive power curve. 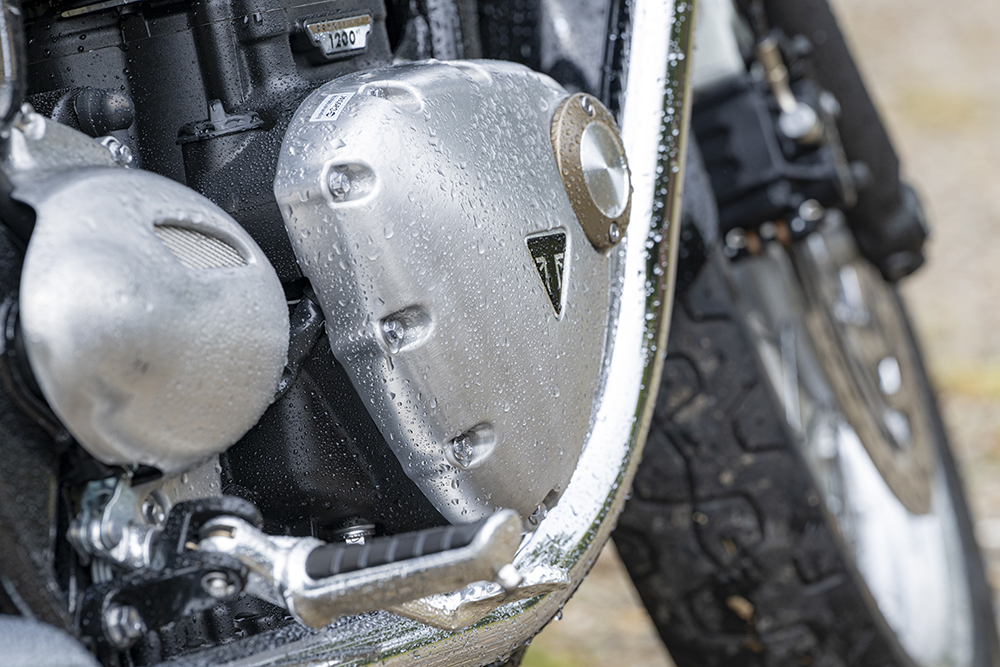 As nice as the power characteristics are, the T120 is all about torque. On tap is 105Nm that comes on strong from just off idle and peaks at a low 3500rpm. There’s plenty of usable power above that but the low-down grunt makes cruising around in lazy mode so easy. But when the mood takes you, the torque and power can get the Trumpy moving at a serious pace and there’s enough torque to send the front wheel sky high if the mood overcomes you. 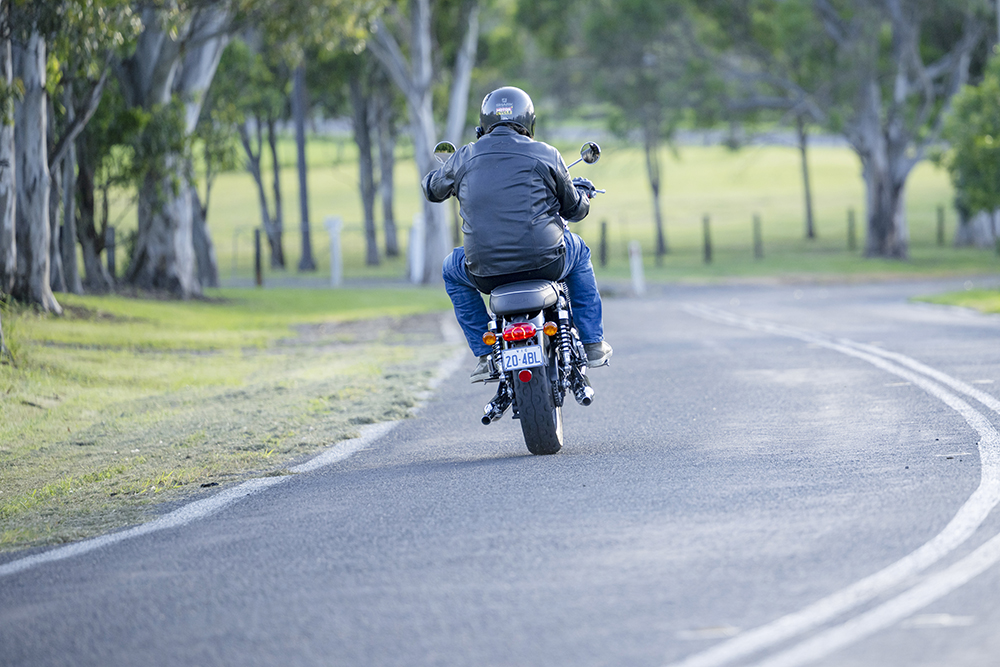 Unlike a few retro themed mounts I’ve ridden, the T120 doesn’t fall into the ‘all show and no go’ category. It’s a very fast motorcycle, but the way the engine makes its power is so smooth that you just don’t realise how quick it is unless you’re monitoring the speedo constantly. 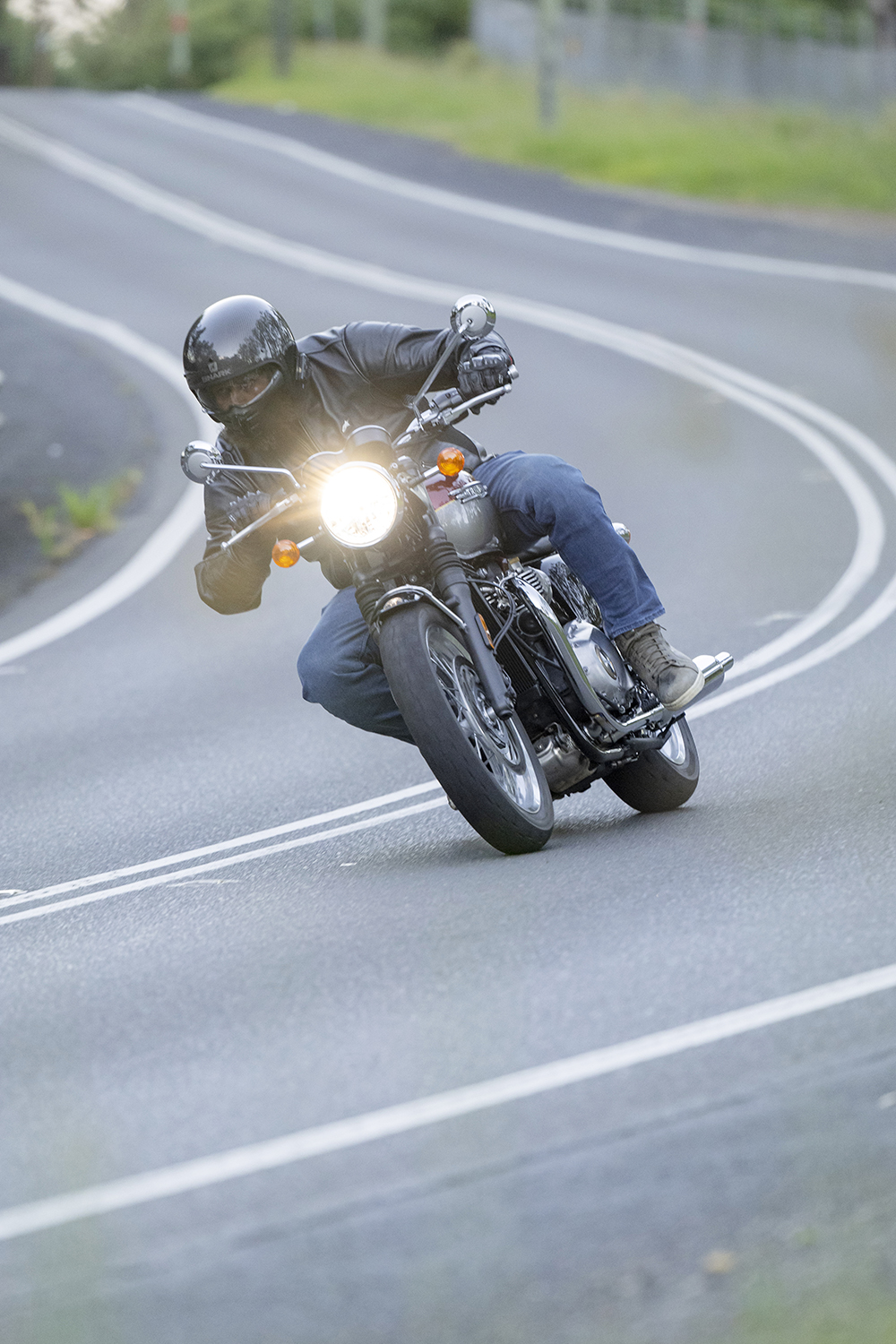 Channelling that power and torque through to the back wheel is a six-speed gearbox with a light and positive action. You couldn’t ask for nicer; there are no false neutrals, no clunkiness and no trouble finding neutral when you’re stopped.

The T120 also features Triumph’s torque-assist clutch that makes the lever pull nice and light adding further to that feeling of being on a small-capacity bike. 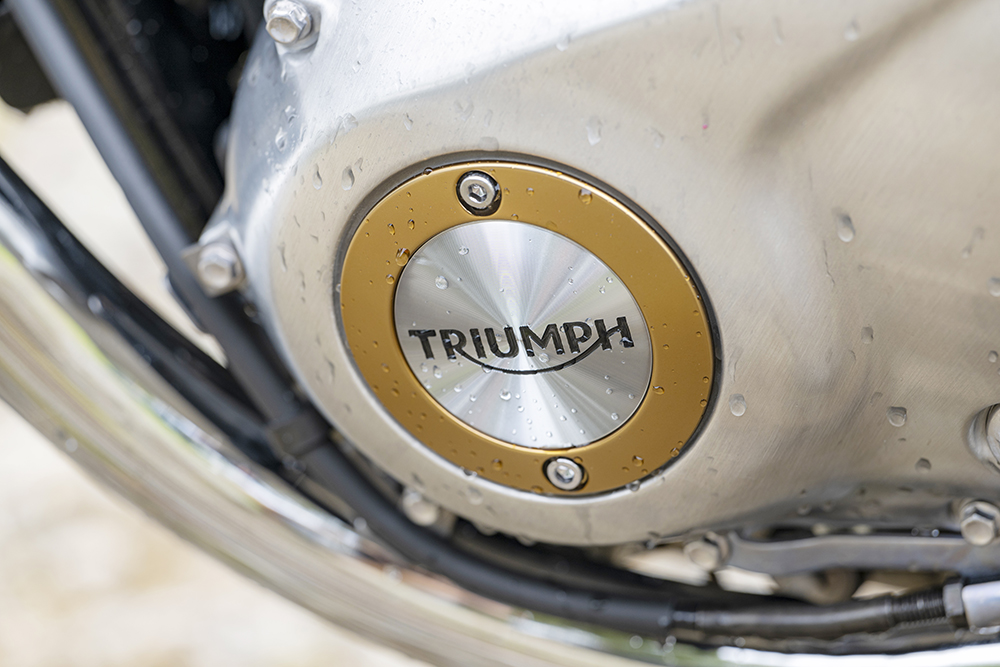 Although Triumph doesn’t give much info away about the exhaust system, it’s safe to expect that the chrome 2-1-2 unit has come in for a Euro 5 workover. Even so, it looks the part, and for a
Euro 5 compliant system with pea-shooter looking outlets, it sounds pretty good – good enough in fact that I’m not sure I’d change the system if I owned one, for any reason other than to shave off a bit of weight. And I can’t remember saying that about any other bike. 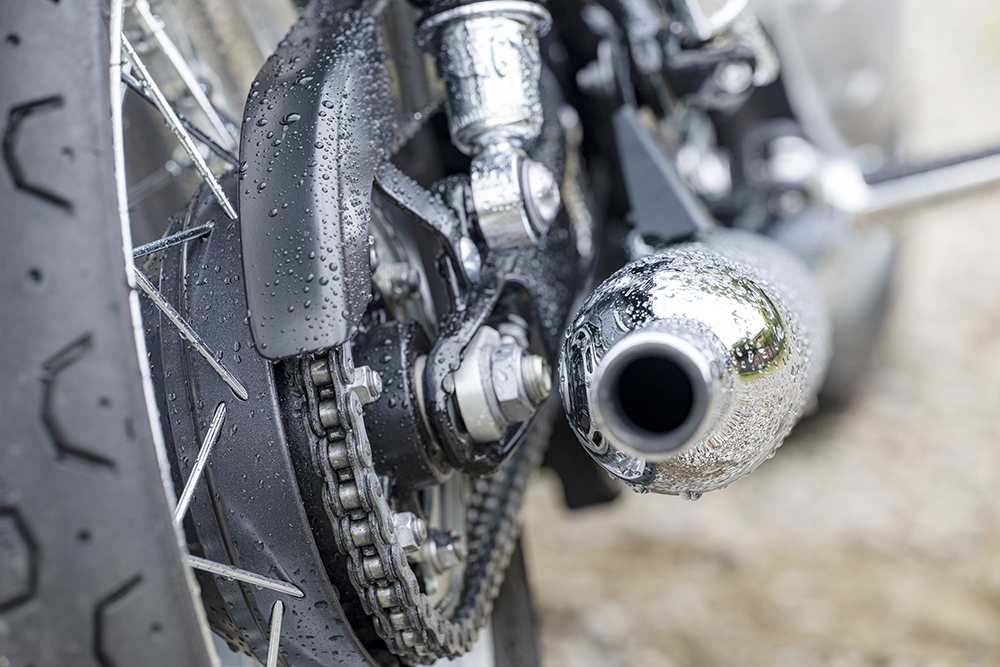 The T120 tips the scales at a rather plump 236kg with a gut full of oil, coolant, brake fluid and its 14.5 litre tank full to the brim, which is seven kilos less than the previous model. It’s heavy for a bike that doesn’t outwardly appear to have much to it, but apart from when you’re shoving it around by hand it hides it weight very well – again it just doesn’t feel like a big-bore bike. 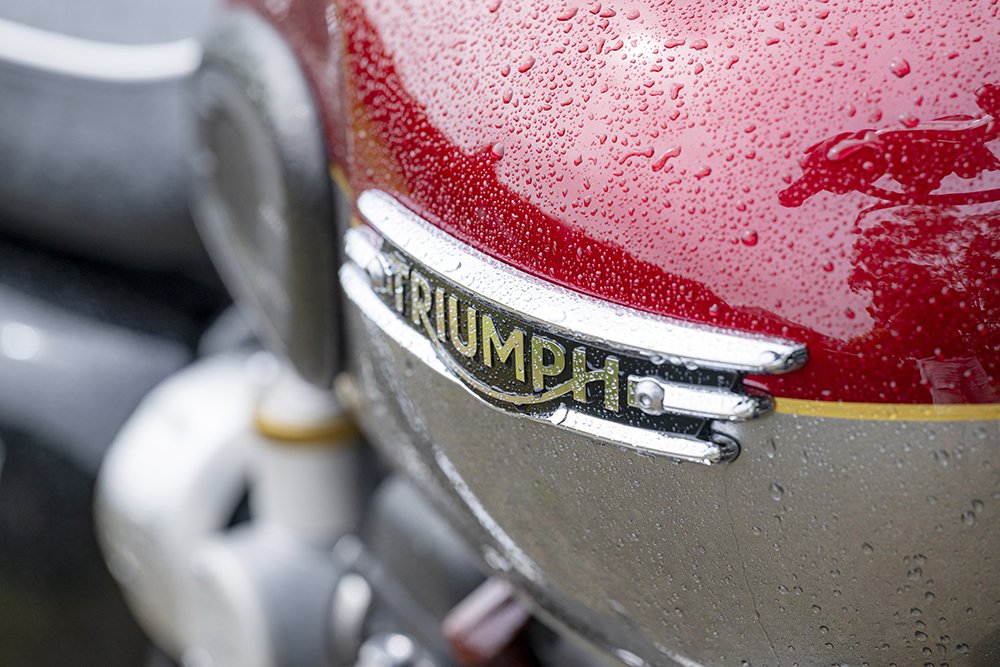 The weight is noticeable if you’re in the hills playing but not in a negative way. It aids the stable feeling that the T120 has as it rides the bumpy roads we’ve all come to expect smoothly without ricocheting off every pothole. The T120’s tubular-steel twin cradle frame gives the bike an old school feel as well, and doesn’t have the overly rigid feel of many modern bikes. In fact, it feels a little flexible in a controlled and reassuring manner when you’re really getting on it through the corners. 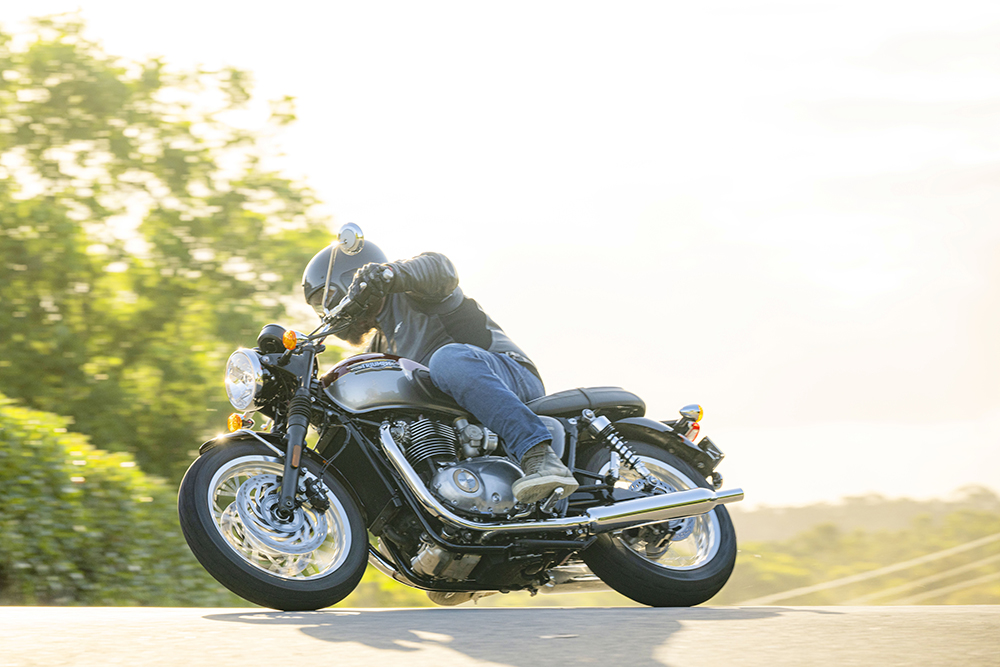 It’s not something that is a hinderance, just a trait, and you get used to it. And the flexibility has some plusses to it. Firstly, is helps to soak up bumps when you’re on the side of the tyre when the suspension is least effective, and secondly, it provides great feedback. It may feel a little loose at first, but you always know what the T120 is up to through the seat of your pants. 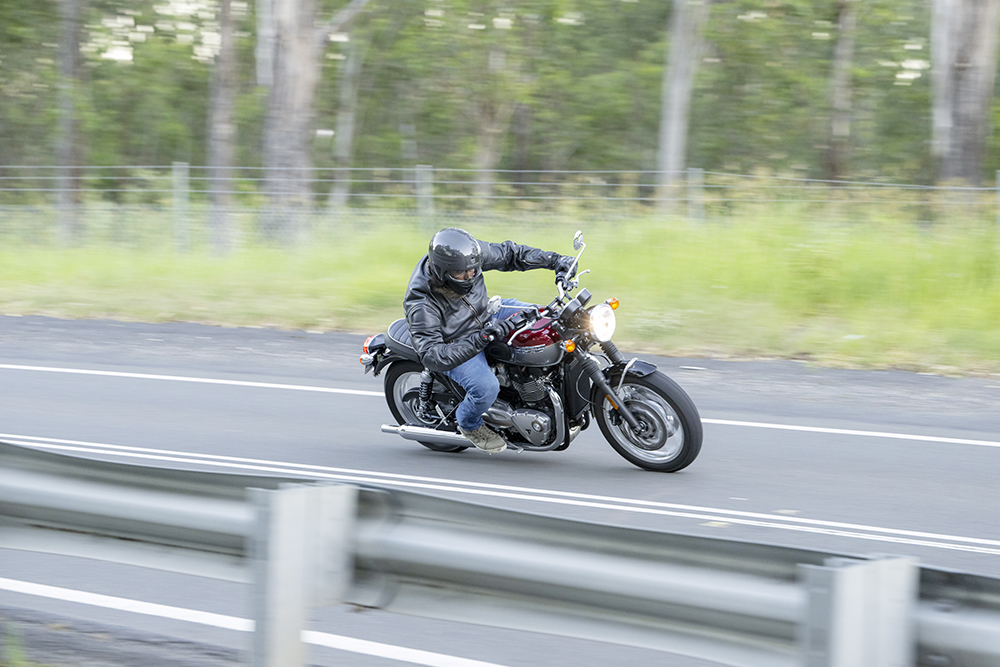 The suspension is up to the task for the type of riding for which the T120 is intended. The front sports a non-adjustable 41mm cartridge fork that provides a soft and supportive ride. For a rider of my weight and speed, I’d like the front-end a bit firmer. There’s a fair amount of dive under brakes and the fork is still very compressed and trying to get its act sorted mid-corner. I’m a big lad so I wouldn’t call this an issue, I’d just firm the front up if I owned one. But on the flipside, the softness does make for a very smooth ride in general and it never bottomed out. 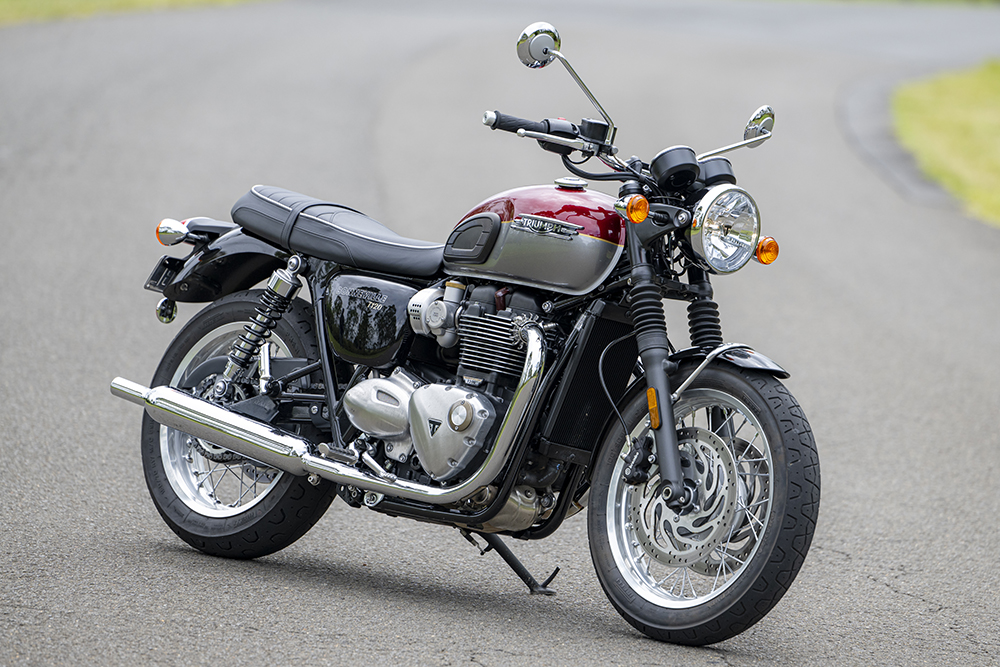 On the rear you’ll find a set of preload adjustable shocks that are also on the soft side for me but generally work well – in a world full of underperforming rear shocks, the T120 has a decent set on its bum.

With the suspension on the softer side for my weight and riding style, ground clearance is an issue and the ’pegs will touch down without a whole lot of effort. But with the suspension set up properly, or if you’re a lighter rider, you may find that this isn’t so much of an issue. 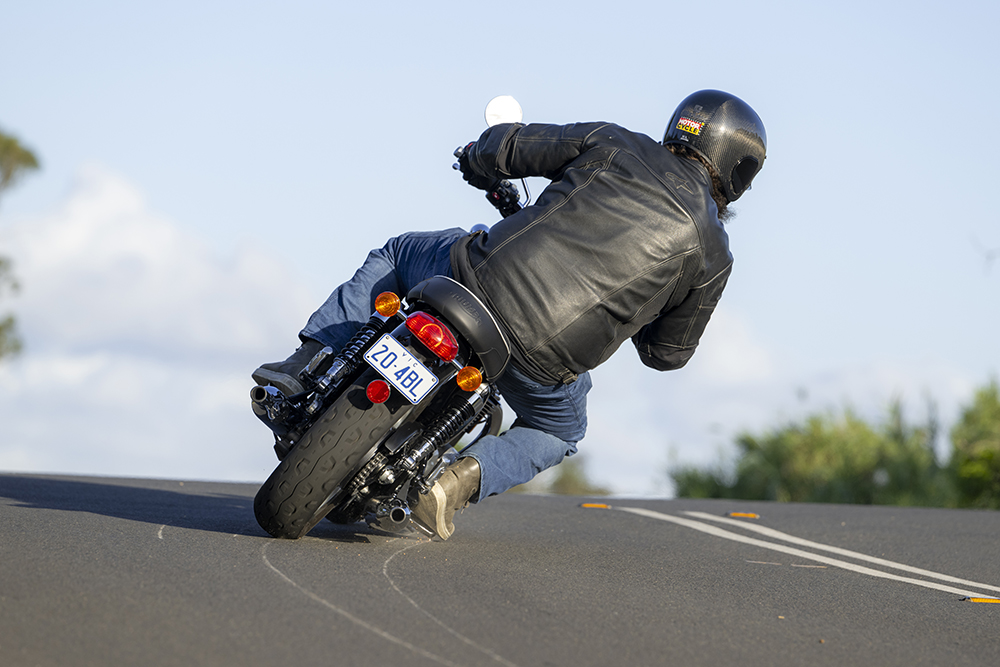 According to Triumph, the T120 received new higher-spec front twin-piston Brembo calipers for 2021. They don’t list what’s different about them, but they do the business and, considering the weight of the rig, they are perfect for the application. The new ABS-equipped Brembos grip a set of large 310mm discs that provide plenty of stopping power and initial bite. They are more than up to the task but obviously lack the feel and outright stopping power of higher-spec Brembo systems. 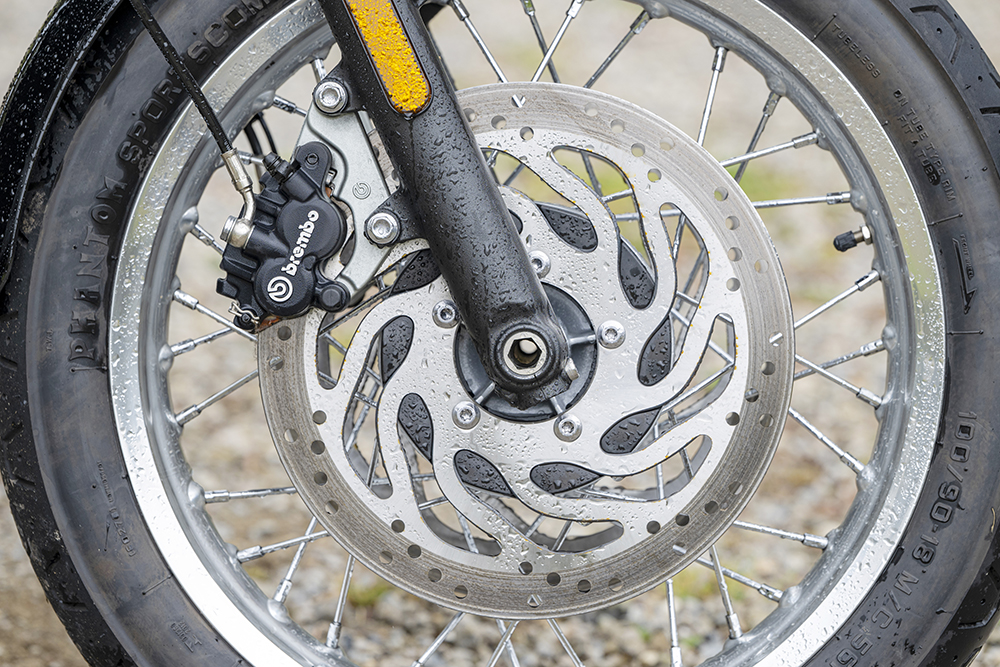 The rear features a single 255mm disc gripped by a Nissin twin-piston caliper. The rear Nissin set-up is up to the challenge as much as the Brembo kit is, and it’s great for pulling the bike around a reducing radius corner or steadying it while splitting lanes.

You don’t get a lot of electronic fruit on the T120, and that’s just the way it ought to be with a retro-themed bike. Millions of functions on a 42-inch, full-colour TFT screen with Dolby digital and surround sound is all very nice, but sometimes I just want to ride and test my skill, and experience a more pure and less clinical form of motorcycling. And that’s what the T120 delivers. 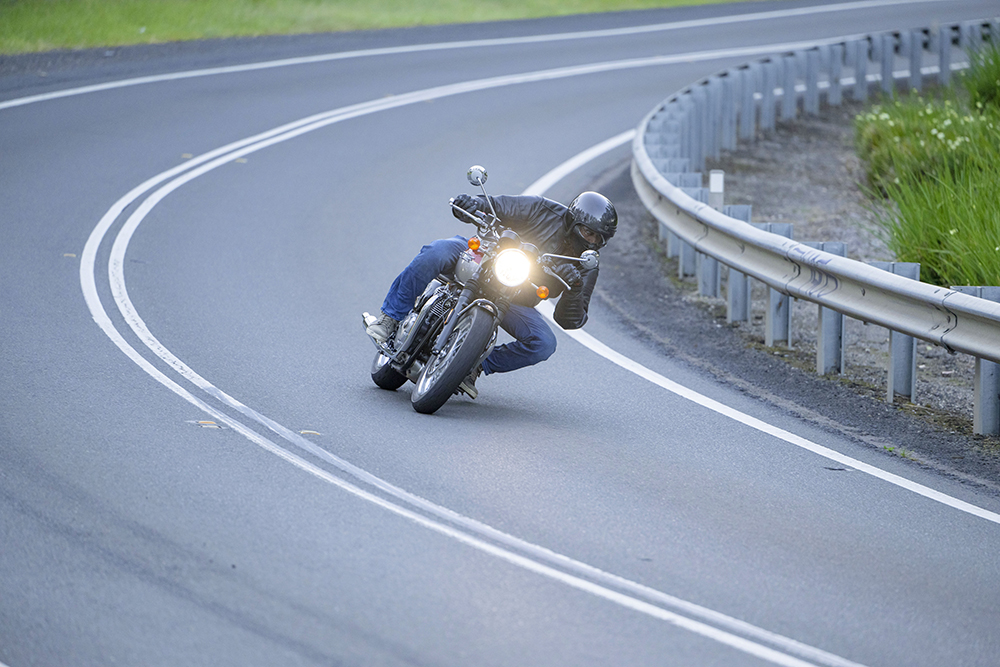 There are, however, some basics to keep you pointing in the right direction. There’s traction control with inbuilt anti-wheelie, which you can turn off with a single button, non-switchable ABS, two ride modes (Road and Rain), a single-button cruise control system and even a USB port under the seat. 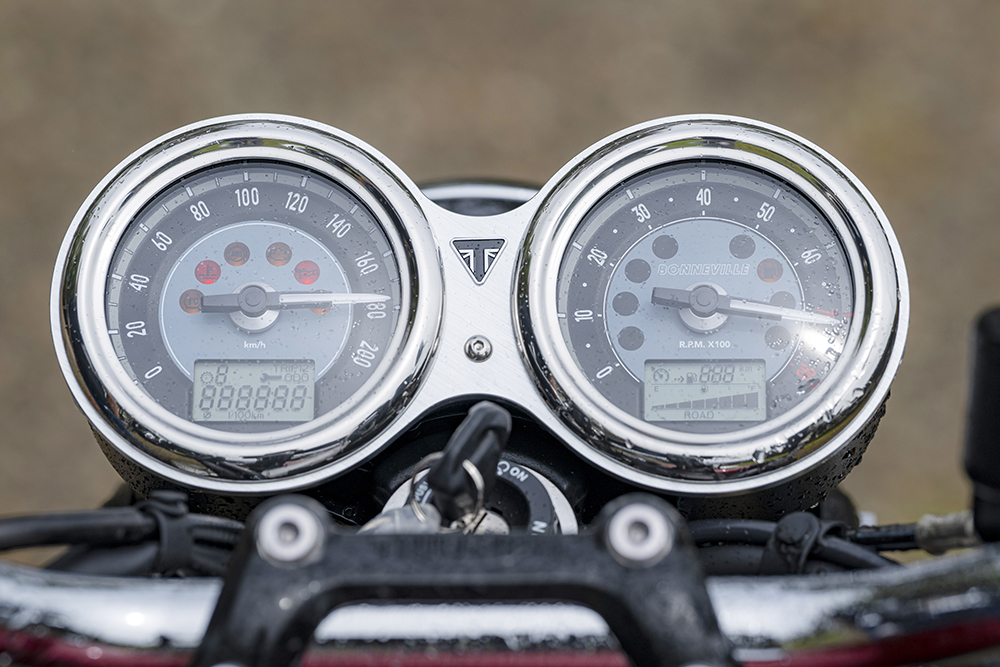 The two-person bench-style seat is way more comfortable than it looks and it’s good for a solid couple of hours in the saddle without an issue if you’re riding solo – not bad for a retro bike built with form and function equally as important.

Seat height is up there at 790mm, so shorties may struggle a bit, with the saving grace being that the seat is fairly narrow. The news isn’t so good if you’re riding two-up. The seat is on the short side so it’s a bit squashy for two, especially if you’re on the larger side of the BMI chart. 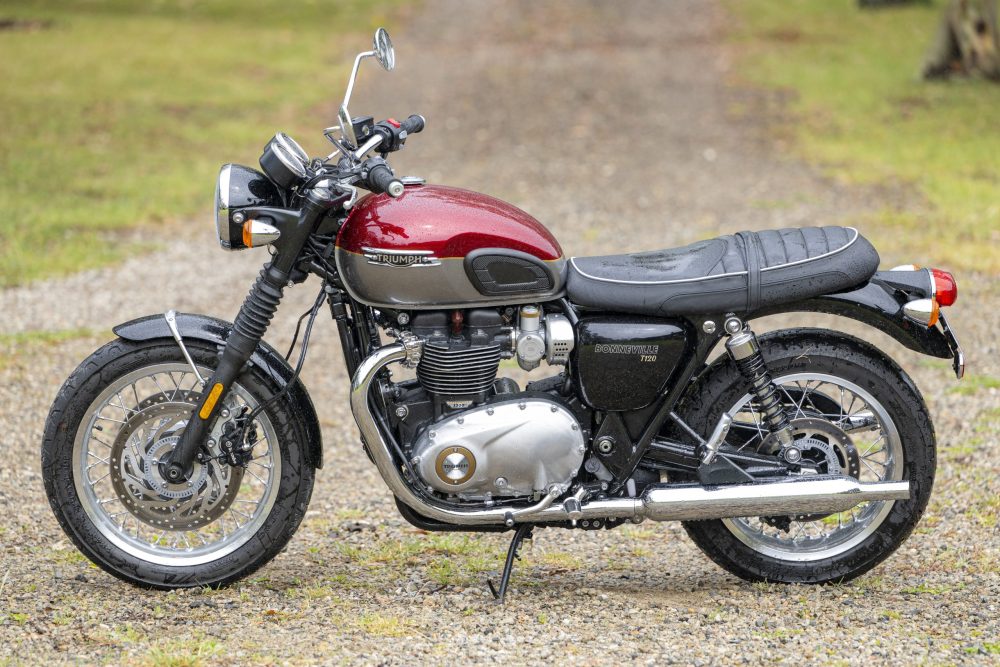 The bonus is that you’ll have time to get your personal space back while you refill the fuel tank. The T120 is frugal on the gas, returning an average consumption of 4.9L/100km, so with 14.5 litres onboard, you’re looking at just under 300 clicks before you’re stranded on the side of the road. 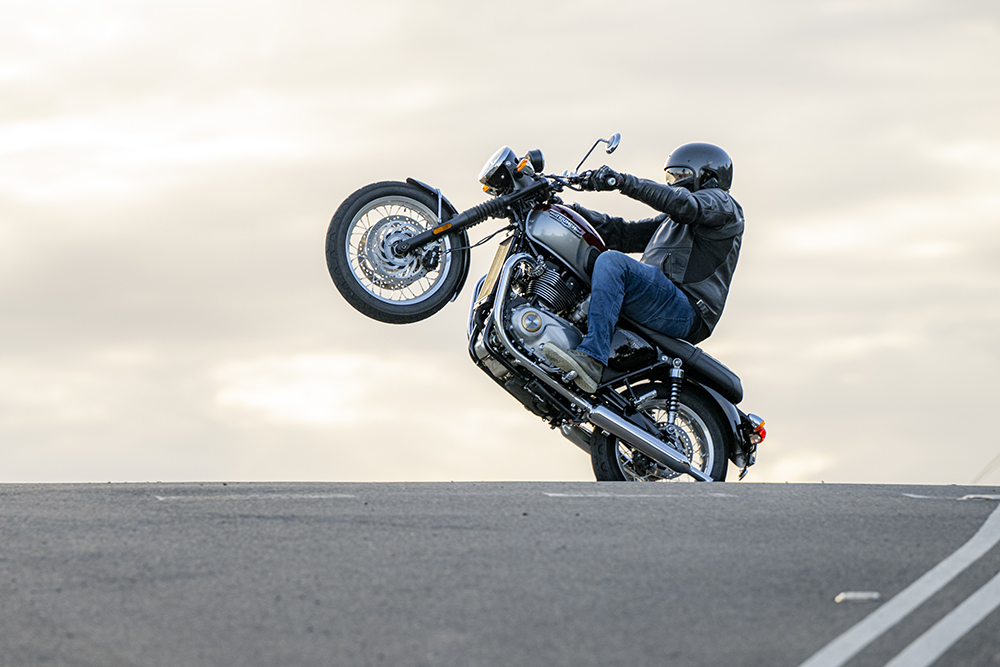 Like all Triumphs I’ve ridden recently, the finish and attention to detail is top notch, and things like the chunky chrome tank badges, EFI designed to look like carbies and even the mesh insert in the countershaft sprocket cover give it a very premium look and feel.

Triumph has certainly captured the look of the original 1959 T120. Side by side, you can see the family resemblance; the new machine looks very much like a beefier version of the old, with a few modern touches. 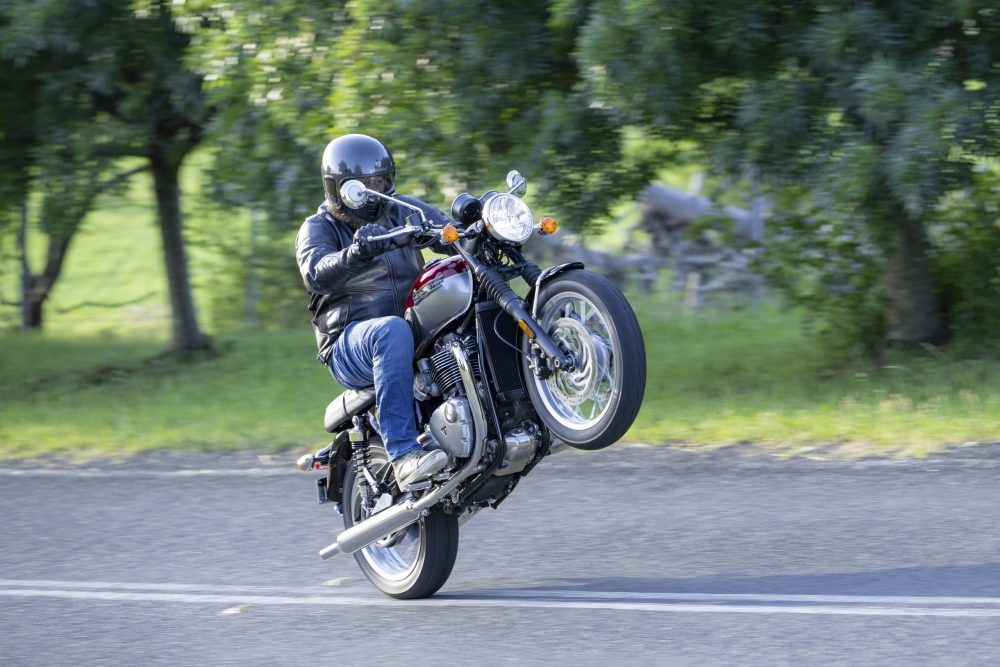 I’m being totally honest when I say I had no gripes with the T120 except that I can’t afford one, and that’s more about living in Sydney than the price of the T120. At $20,890 you get a lot of bike and a lot of cool for your dollar. The T120 isn’t an underpowered and under-specced retro offering – the T120 is the real deal. You can play, or you can just kick it and cruise.

I may be gushing in my praise of the T120 but that’s just the way it has to be. It’s not overly exciting on the spec sheet but I loved what it is – a grunty, good handling, bike that’s easy to ride. It stops well, has a great finish and killer classic looks. In the realm of vintage-looking modern motorcycles, the T120 is the most complete package I’ve ridden. 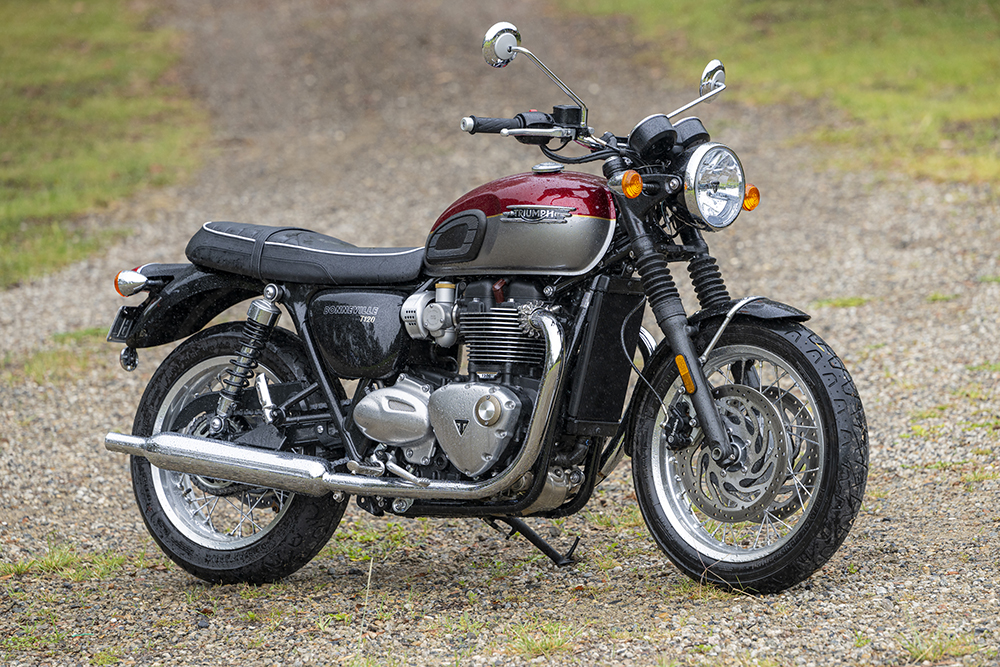