When the furthest corners of the continent beckon, and you yearn to see the day melt into an unfamiliar horizon, you know it’s time to GT on up the road

It seems to me that Suzuki aren’t seen as a sexy marque, and this may even be costing them sales that should rightly be there’s, at least in terms of value and capability. It’s a shame, because it means a lot of riders are missing out by overlooking Suzuki when they are doing their pre-purchase test ride crawl around the dealers. Case in point is the V-Strom 1000, about which I recently had a conversation with an old friend, who also happens to be the owner of long-serving Victorian Suzuki dealership Raceway Motorcycles in Keilor. Damian and I were in total agreeance (back off grammar-geeks, I’m part Scottish, so it’s a real word) that both the 1000 and 650 V-Strom are cracking bikes to ride, but much to my surprise he said they weren’t so easy to get off the showroom floor. This is when I came up with the sexy theory, because I simply can’t think of any other reason why a majority of folk wouldn’t save themselves ten grand or so on the cost of a European bike, when the Suzuki will see them arrive with just as big a smile on their face and a bulging wedge in their wallet. Of course, sexiness is a subjective thing, but I’m guessing that for most riders Euro means sexy, and therefore ‘worth’ paying a premium for. Then there’s the technology trump, too. Euros have all the techno-fruit, even the stuff you don’t need, can’t digest, won’t eat, and sometimes are even allergic to. But if your mate’s got it, you need it too. Right? Let me say straight off the bat, if the V-Strom 1000 had cruise control and heated grips, I would say ‘buy it, you idiot’ to anyone asking which Soft-Roader adventure style bike to fork out their very hard-earned cash for. If you shit dollar bills for breakfast or have a money tree in the back yard, well, just buy the bike you truly want, but don’t expect it give you bigger jollies than Suzi can. Remember, money can’t buy you true love, just ‘love’.

The V-Strom 1000 GT is exclusively an Australian model, put together by Suzuki Australia to offer fully-dressed version of the 1000cc V-Twin adventure tourer. Ready-made to set off on that ‘round Oz trip we all dream about at some stage in our lives, or in my case, every day.

The grand tourer accessory pack which comes as standard on the GT is also in the genuine accessories catalogue, and would normally be fitted to the standard V-Strom by the dealer during pre-delivery. Potential owners with far horizon on their radar will appreciate the $1950 saving over buying bike and accessories separately.

We’ve featured the DL1000 V-Strom in AMCN many times over the years, and if you did the research you’d find there’s hardly been a disapproving word said. Those who know this motor will confirm the V-Strom has a heart of gold. Dependable, tractable V-Twin grunt. There’s no bling factor with the big Suzi, but there’s no bullshit factor either. Smooth unwavering power effortlessly winds the Strom up to speed with a minimum of fuss. But, there’s just enough muted exhaust howl, induction roar, and atmospheric throb to make you aware of that pair of 100mm slugs pounding out their right-angle rhythm at 20 metres per second between your legs. These things are important when choosing a V-Twin. Part of the investment is monetary, part is emotional. Winding the Strom back down to a halt is also a cool and convivial process. The servo-assist slipper clutch works in a typically ‘Suzuki’ smooth fashion; If there were honours for excellent clutch action, Suzuki would be top of the crop over the years.

Non-switchable ABS complements the twin 310mm discs and tenacious Tokico monobloc calipers up front, with a big 260mm disc at the back to help steer the Strom from the rear without cooking it. With a whopping wheelbase of 1550mm, the Strom loves a touch of rear brake drag to help pull it around mid-turn, so it’s easy to get carried away with your right foot when the road puckers up and dares you to have a good scratch, or when the tar turns to gravel and the rear brake naturally gets a workout.

On the loose stuff the Strom is a capable and confidence inspiring unit, albeit with the usual caveats for bike producing 100 ’horses, 100 ’Newtons and weighing close to a quarter of a ton. Respect is due, and when given will reward the rider with good manners on the gravel to go with exemplary road touring ability. There is a limit to how aggressively you can ride the Strom off-road, which is governed by its suspension performance. The ride quality itself is excellent for the majority of use this bike will see, it’s a real ‘floater’ on the road, in a good way, and there is ample adjustment in the KYB shock and fork to crank up some extra support and control when required. The easily accessed hydraulic preload adjuster on the rear makes load compensation a breeze. I prefer to keep a couple of extra turns of preload on than the standard setting, just to sharpen up the Strom’s steering a tad.

Big hits off-road, particularly at speed and when fully loaded, will blow through the Strom’s suspension travel fast enough to remind you that this is not primarily a dirt bike. But the quality KYB units do give a good base with which to uprate springs and damping should you choose to set the Strom for a life of more dirty deeds.

One thing you could never accuse the Strom of is not having enough cushion. Its seat has length, width and depth in abundance, and even with its extra thick portion of foam to conform to, the grippy textured cover doesn’t wrinkle up. Feet are also treated to some major pampering thanks to the ’pegs being topped by ultra-soft air-pocketed rubber. The only thing that irked me when straddling the Strom, was I never quite worked out whether my legs wanted to go in front of or behind the ’pegs when at a standstill. I even tried one forward, one back. Then I took some smelling salts and hoped no one had noticed. 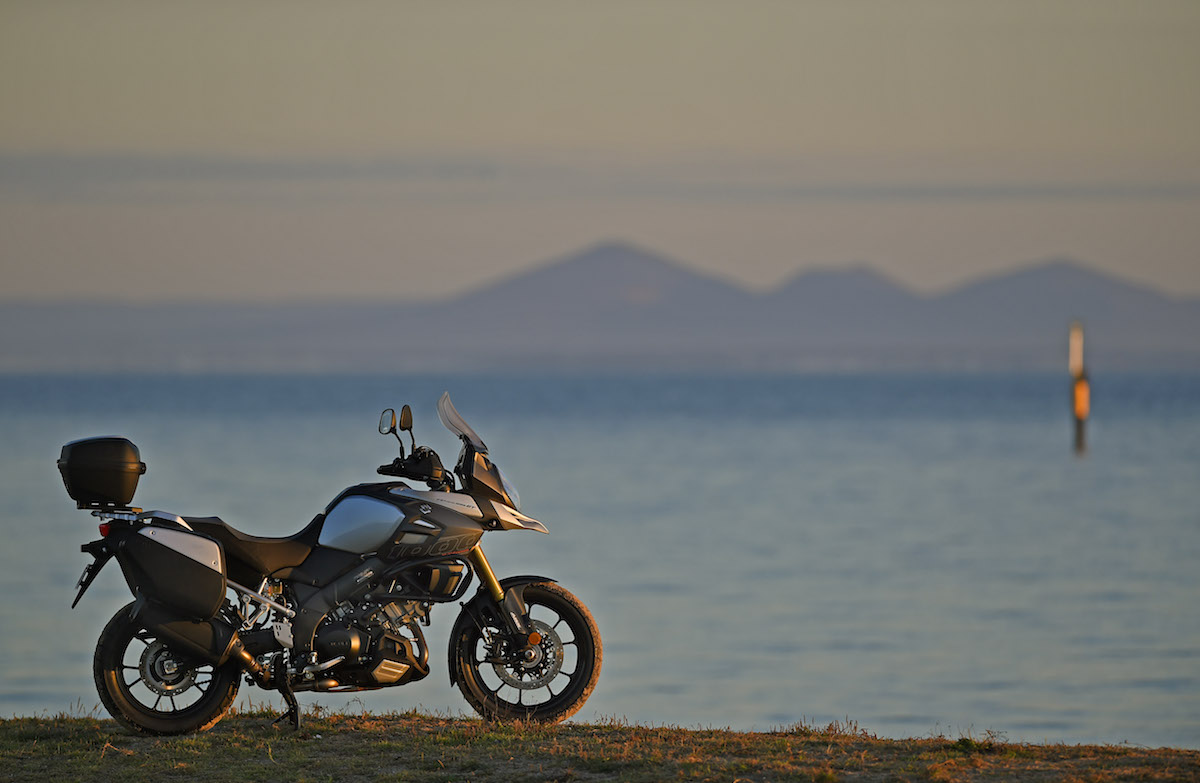 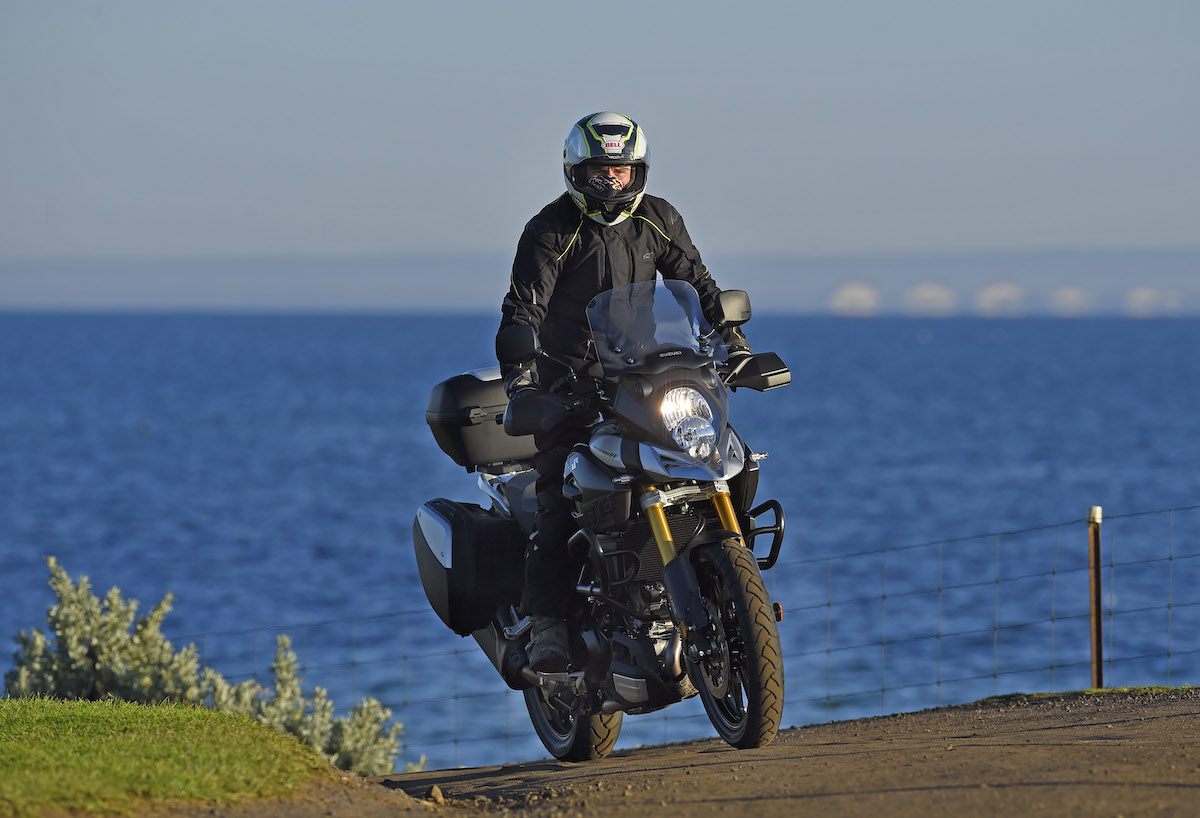 The Strom’s handlebar is a not too wide but high-rise cow-horn style ’bar, with a reasonably flat angle at the end. I’m not sure if it was the intention, but what this means is there is quite a lot of range adjustment available just by rotating the ’bar in its clamps. The Strom should suit a very wide range of rider sizes, and although I found the standard seat fine for my 173cm of fur and sinew, there is also a 30mm lower seat option in the accessory catalogue which moves your arse south at a rate of $10 per millimetre.

The cheek-cosseting comfort extends rearward to the co-pilot’s seat, which is wide and deep enough to confirm the pillion was no afterthought of design. Stout side handles are well spaced out from the seat, giving your shadow maximum security and stability. Even more so with the top box fitted. Two-up touring would be a pleasure for all concerned.

I spent quite some time riding the Strom after dark and was pretty impressed with the headlight performance. The beam is very clean and clear, as well as offering a lot of peripheral illumination on both high and low beam.

Going back to my earlier thoughts on what the GT is missing; heated grips are easily sourced aftermarket, or added straight from the Suzuki accessories catalogue for an extra $450.  Even aftermarket cruise control systems can be sourced and have been successfully fitted to V-Stroms by some owners. A quick google will come up with a few options there, including both mechanical and electronic CC systems. But would all that faffing and extra expense still make the V-Strom GT a good buy? Yes, it would. Why? Because it’s a bloody great bike in the first place, that’s why.

What makes a GT?

Extra protection is never a bad idea when you are heading far from home, and thankfully the parts added to the GT aren’t just for show. The crash bars are super-sturdy and securely fastened to the outside of the frame with thick mounting plates. Cleverly, each side’s crash bar uses the strength of its opposite number to further stiffen its resolve, using a beefy brace which runs between the two just below the front cylinder head.

The under-engine cowling fitted to the GT looks great and will protect the sump and oil filter from possible rock strike damage, but it’s still something I’d be tempted to replace with a more substantial aluminium bash guard if I had treacherous terrain plotted on my GPS.

The tank gets paintwork protection in the form of a rather natty looking logoed tank pad which runs the full length along the top, and there’s also clear foil on the sides to stop knee scuffs.

But it’s not just the bike which gets protection. Hand guards like the ones fitted to the GT are essential kit for anyone who appreciates the joy of having fingers. They’re really fun, and great for all kinds of tricky tasks not enjoyed by molluscs or fish. Problem is, fingers break pretty easily when a truck tyre launches a brick at them at 110km/h.

Heads are quite handy, too, and well worth protecting. The GT is fitted with a touring screen which is both wider and taller than the standard V-Strom’s. With three mounting options for different heights, and a further three angle positions adjustable without the need for tools, the screen caters for all riders, short to tall. Its sculptured shape seemed extremely effective at reducing buffeting and the forward pressure applied on the rider’s head by some tall screens. If you are going on a grand tour you’ll be needing your toothbrush and a clean pair of pants, which means you’ll need somewhere to put them. The GT is fitted with Suzuki’s own hard panniers and matching top box. There’s 90 litres of luggage space in total, split into 35L in the top box, 29L in the left pannier, and a smaller 26L pannier making room for the exhaust silencer. All three boxes are lightweight, easy to fit, and remained completely waterproof in the recent deluge down in Victoria. The top box also makes an excellent pillion backrest. There’s no pad to lean on, but then your valuable cargo should be wearing a back protector anyway. Shouldn’t they?

If all this luggage space isn’t enough to fit your big pants into, for an extra $490 there’s a feature-packed 15 litre tank bag in the accessories catalogue.

A centre stand makes loading and working on a bike much easier, and the one on the GT is well-designed so is easy to operate. No need for grunting, straining, and cussing here. A gentle rock, and she’s up. Just like it should be.

Finishing off the GT’s special appointments are LED indicators, and some very fetching side graphics and GT badges. Oo la la!