Italian motorcycles are things of beauty, not only in their design but in the way they handle, the way they deliver their power, their presence and that feel-good factor that just makes going for a ride worthwhile. When I got the call from Editor Dobie to test the latest retro classic incarnations from SWM, he was quite surprised to learn that I had one tucked away in the shed. Although the marque is not well known, I grew up riding trials bikes made by the brand and to this day I’m probably one of the few people to have followed SWM’s existence.

In the 1970s and 80s SWM was definitely a hard-edged company that made competition motorcycles, and perhaps that’s why the company became defunct. Reborn only three years ago, SWM is taking a different path this time with a range featuring more versatility and a less race-focused stance.

The nine models in the current range don’t claim to be the best, fastest or lightest; their selling points are quality, beauty and – at least in the retro range – nostalgia. SWM has not ventured into the classic bike/retro market before, so I looked forward to testing the new Gran Milano and Gran Turismo side by side.

When the bikes rolled out of the van, the first job was to spot the differences between the two models. The Turismo (the blue bike) is more of a ‘sit up and beg’ machine, while the Milano has a more crouched riding position. The Milano is also a single-seater, and with the upswept SWM-branded pipes sitting high, pillions will be left at home unless the optional two-seater kit is fitted. The Turismo, with its lower pipes and double seat, can carry a pillion.

The Turismo also makes no pretence of being modern in any way. Its upright handlebar, conventional front fork set-up and rear shocks sans piggyback reservoir mark it out as the more retro of the two.

Instrumentation on both bikes is no-nonsense, with just a tacho and a speedo. There are a few lights – low-fuel warning, high-beam indicator and low oil – keeping things simple, and just one button to reset the tripmeter. And that’s it. Domino clutch levers on both bikes certainly help give the cockpit a high-class feeling. 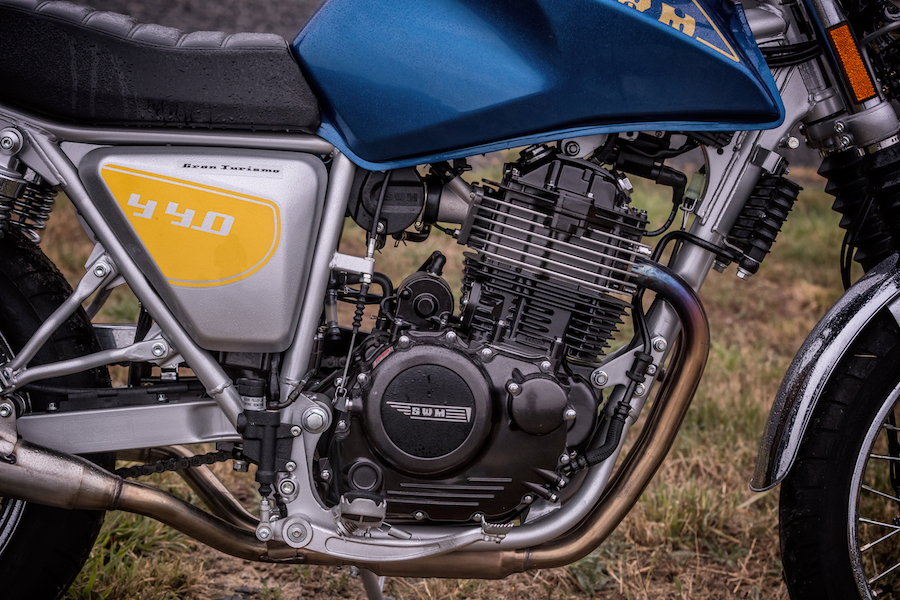 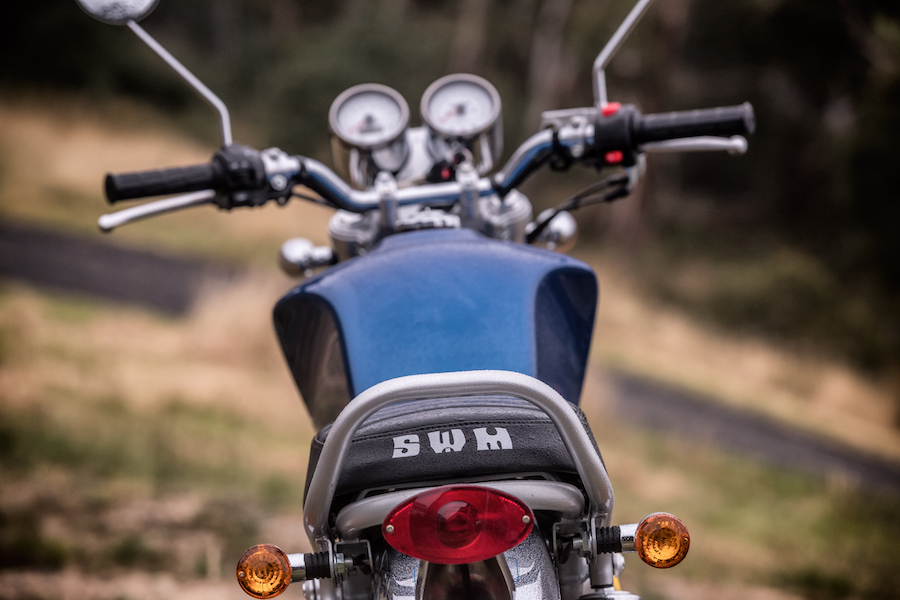 The engine employed for both machines is an air-cooled 445cc single-cylinder pumping out 22kW, placing the bikes within the LAMS category. The engine is made in the Chinese factory of parent company Shineray and then shipped to Italy, where it’s assembled and placed into the chassis by the Italian crew.

So far pretty similar. But when you get down to the nitty-gritty you really start to appreciate the niceties of the Milano – you can see SWM has added a lot of fruit for the minimal $500 price increase it attracts in Australia.

The Milano’s swingarm is a fancy aluminium item that promises to be strong and purposeful, and the upside-down fork and fully adjustable Fastace shocks (from Taiwan) really look the biz, as does the Brembo front brake caliper with a 320mm wave disc. 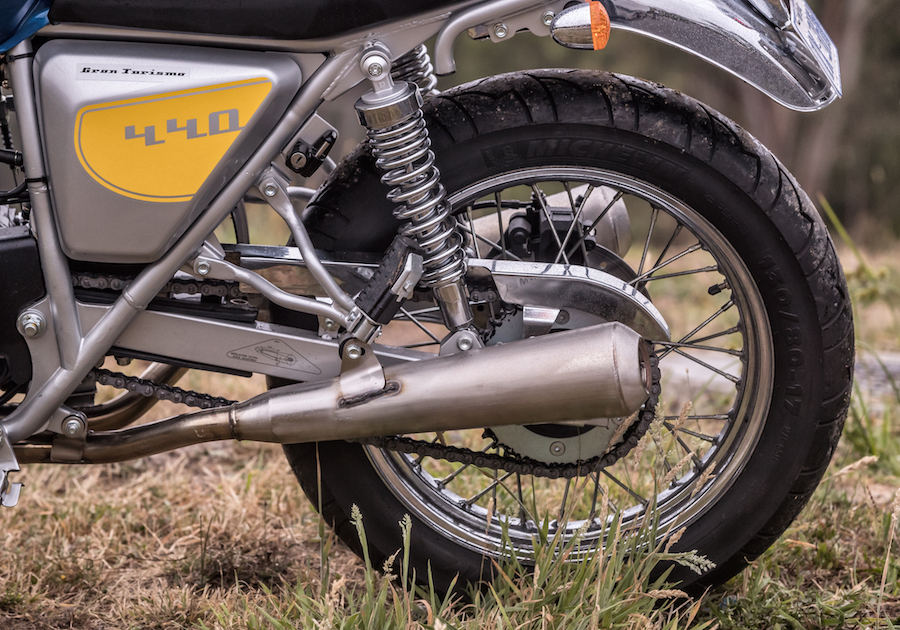 With its swept-back footpegs and low ’bars, the Milano is very much a modern version of the café racer concept.

One of the bike’s boldest or most striking assets in the flesh is the rubber. While the Turismo is fitted with excellent Michelin Pilots, SWM went crazy with the Milano, keeping a 120/70/17 front and a 150/60/17 rear, which is normal, but fitted with wet weather-style Golden Tyre radials. This company is big in the dirtbike world, with many famous riders using its off-road rubber with great success, but is quite new to supplying road equipment. I think the risk paid off, though, because not only does the bike look great with the Goldens, it grips and handles well too.

One pleasant surprise is that both bikes are fitted with helmet locks – an item that seems to
be overlooked by a lot of manufacturers these days. To find them on these two steeds was definitely a plus. 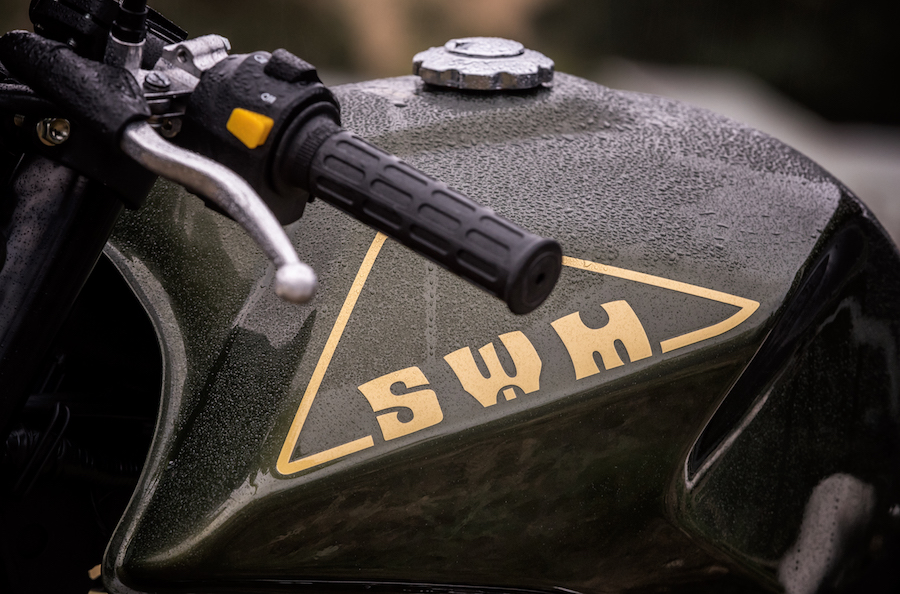 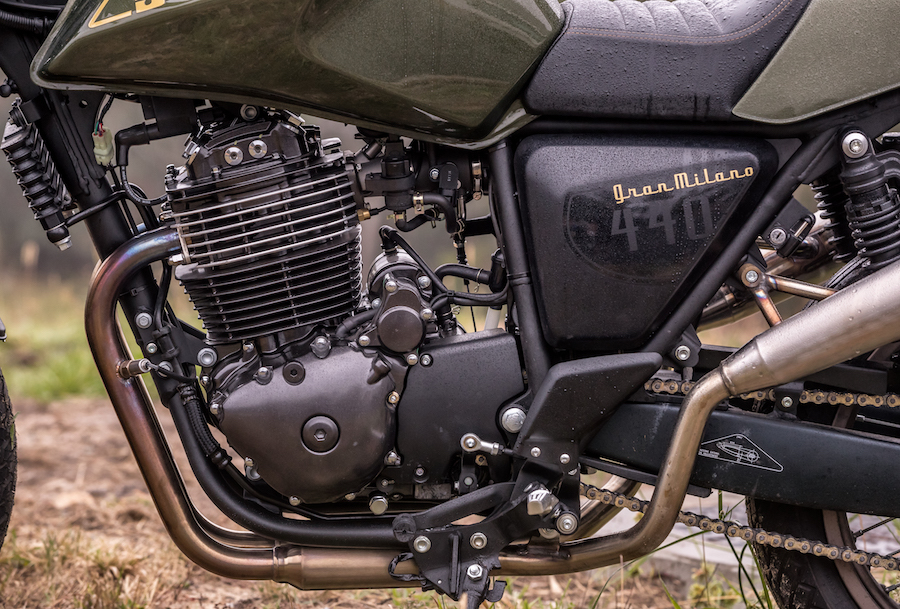 When the time for probing, prodding and procrastinating was over, it was difficult to pick a clear-cut favourite. I needed help, so grabbed AMCN hard-man Paul McCann for a ride.

Something drew me to the Milano first, and I’m still not completely sure what it was, but the bike appealed to my taste. The first thing I noticed was how light it was, which is a very important factor on any learner-focused machine.

There is no choke fitted to the Milano, but as I thumbed the button to start the beast I found myself searching for one. It didn’t burst into life like a Japanese machine would, instead taking a couple of extra revolutions and a little playing with the throttle to make it fire. I personally don’t have an issue with bikes that aren’t perfect starters as I think that adds character. As long as it starts, that’s fine, and start it did.

After the obligatory warm-up it was time to hit the road. The clutch is smooth and the low-down power more than enough to give you that safe feeling that it’s not going to stall or splutter away from the lights while doing slow traffic work. And the exhaust note is superlative, giving a pleasant bark as you snick up through the gears.

The ergonomics are surprisingly good – not too cramped yet keeping the café racer stance. It’s a hard job to combine the two and get it right, but SWM has come close. The throttle response is perfect with no flat spots and an amazing amount of speed for its power output. The chassis made me smile with its ability to maintain a line through a tight corner, and if you lean in just that bit more it turns tighter. The steering rake feels steep on the Milano, but boy does that front grip.

The bike is also quite stable at speed, maintaining its composure. Although the Fastace suspension is adjustable, I didn’t feel the need to muck around with it as the base settings are very good for this type of everyday riding.

The front Brembo brake set-up is phenomenal, with gobs of power and feel.

By the time we reached our halfway point at the Emerald Village Bakery, I would have been quite happy to stay on the Milano. However, as PMac and I chatted and contemplated life over coffee it was clear he was champing at the bit to get on the

Milano, so we swapped bikes.

Thumbing the starter button instantly made the Turismo burst into life, with a somewhat quieter note than the Milano. Still nice, but definitely more subdued. It prompted me to look closer at the pipes and note that the baffles are in position on the Turismo, but not on the Milano. It’s nice to know that with the removal of a C-clip you can slip the baffle out and transform the sound of these machines without having to fork out big dollars for an after-market pipe.

Although these two bikes have identical frames and engines, the Turismo is a completely different ride. Its old-school 19-inch front rim certainly gives the Turismo an agile feel and somehow a lighter steering sensation. That feeling of lightness could also be put down to the more upright riding position and wider bars.

The Turismo is a comfortable bike for just cruising and taking in the scenery, and that very light feeling would give anybody confidence when it comes to parking or just general manoeuvring around.

As on the Milano, the Fastace suspension works really well. The fork still has modern internals and clicker adjusters if you feel the need to play around and the rear shock also takes everything you can throw at it in its stride.

You do notice a slight lack of front brake power compared to the Brembo-shod Milano, but there’s still ample stopping power and definitely a lot more than a bike of this style would have had back in the day.

By the time we arrived back at our starting point, I had been impressed with both beasts. It was harder than I expected to pick a favourite as both bikes attract different styles of riders.

The most impressive thing for me, though, is probably the way these new SWMs have burst onto the scene with a high-quality feel and are capable of doing the job they were designed for, with no fuss. And that’s a big ask for any company to achieve first time out.

Who the hell are they?

There is an illustrious history behind SWM. It was founded in 1971 by Piero Sironi and Fausto Vergani and based near Milan. It was initially named SVVM (Sironi Vergani Vimercate Milano) which was soon shortened to SWM.

The firm started selling observed trials machines fitted with Sachs and then Rotax motors before moving into the enduro scene. SWM’s success culminated in winning a World Trials Championship with Gilles Burgat in 1981.

Despite a growing list of achievements, the company struck financial hard times and went into receivership in 1984.

Two decades later, SWM was revived in 2014 with a modern factory in Varese, with funding from China’s Shineray Group. The pipes on the Gran Milano are definitely high-quality items, with a high sweep that gives the café racer an aggressive stance. The simple removal of a circlip releases the baffle, which gives the bike a deeper note without making it obscene.

The air-cooled motor is assembled in Italy but originates from China. The quality of material made in China is improving all the time and, with a two-year parts and labour warranty, you can feel confident that the SWM will keep on keeping on.

Stopping on a dime

The Brembo front caliper has an amazing amount of stopping power and a good deal of feel to go with it. One- or two-finger operation is all that’s needed to stop in a hurry. The wave disc is probably a bit gimmicky but works well and adds to the appeal.

22kW on tap added to a low dry weight of 145kg gives the Milano impressive performance; cruising and accelerating up to legal speed limits is easy. The 440cc donk is fettled by the Italians, who have always been able to squeeze a bit more out. The Turismo looks like it’s just come out of Doctor Who’s Tardis with the conventional fork and standard old-style shocks following the lines from the 60s. A 19-inch wheel gives the bike the final touch to make you feel like its 1965 when you’re on board and rolling through the countryside.

There’s no traction control, no heated grips and unfortunately no ABS on either model. It would have been nice to at least see ABS fitted, especially with LAMS riders being a major part of the market for both of these machines.

Not just a café cruiser

Both the Milano and Turismo come with 22.5-litre tanks, meaning some serious kilometres can be covered between fuel stops. And with 22kW on tap and a low dry weight, it can hustle.

The retro-style Turismo is sure to fool many a passer-by as to its age. I personally like the styling of the bike and its functionality, even down to the thoughtfulness of fitting the bike with a helmet lock – it will take you down to
the shop, and now you can actually go in.