Whether it’s a trackday or two-up touring, BMW’s big K1300R is a consummate performer

As a last-minute addition to the rider list for the recent BMW RR Experience at the Phillip Island Grand Prix Circuit, I wasn’t in a position to push my way to the front of the queue and snatch a set of keys to one of the S1000RR sportsbikes available to the paying punters – most of whom appeared to be simultaneously salivating and quivering at the prospect of blasting a high-powered BMW motorcycle around the famous circuit. Instead, I hung back and once all the bikes had been divvied I ended up sans motorcycle. “Why don’t you jump on the K1300R,” suggested Miles Davies from BMW Australia, and so began possibly the longest quick spin in AMCN history.

That was four months ago, and since then I have enjoyed racing a circuit, twisty mountain roads, clogged city streets and even two-up touring on the big naked musclebike. The experience has left me convinced there is nothing this bike can’t do well.

The, err, well scrubbed Pirelli Diablo II tyres on Big K at Phillip Island were a dead giveaway this bike had and could be ridden hard, and I quickly found the the 1293cc inline four-cylinder powered machine is wonderfully suited to the fast flowing and open nature of the circuit where its 243kg (wet/claimed) weight was barely noticeable. With 127kW and 140Nm at the mercy of my right hand there was certainly no wishing for a few extra ponies. A few shocked looks were visible through visors as Big K passed victims on the outside of Southern Loop and out-braked them into the hairpin. The twin disc, four-piston stoppers easily bring things to a stop with haste, while the Duolever front suspension all but eliminates front end-dive. On corner exit the Paralever and shaft system at the rear feeds the power to the back wheel so smoothly it’s makes you laugh – you feel comfortable blasting around a grand prix circuit.

When the K1300R had finally finished its national tour of RR Experience duties, BMW allowed me a couple more weeks of enjoyment on the road. Compared to bikes in the same weight category this thing is a cinch to ride in an urban environment, and away from the race circuit is where you most notice the lovely sound of the exhaust note, assisted by an exhaust valve which also helps with torque delivery. Runs up Macquarie Pass and down Barrengarry Mountain confirmed my idea that the K’s handling had not been clouded with time. It’s not the world’s quickest steering bike in tight and twisty sections due to its weight and wheelbase length, but it’s rock solid and predictable.

With BMW calling me to find out why I had not yet returned their bike I took off for one last spin with Mrs Ed on the back. A quick flick of the ESA II suspension settings button to let the onboard computer know we were riding two-up and away we went. The big, soft and wide seat gave the two of us plenty of room, with the only complaint being we didn’t have the any luggage, otherwise we may have kept going. Unfortunately, this story does not have a fairytale ending. Following seven years of production BMW has pulled the pin on Big K. But it’s not too late to grab one, and the remaining stocks are being run out at a very attractive $21,990 (ride away) with all the optional extra goodies listed above fitted as standard.

For a big guy who loves big, powerful bikes the K1300R sits just above the S1000R on my list of enjoyable BMW rides. It’s big and quirky, but it delivers across such a wide range of riding genres that it’s almost impossible to resist.

1. The big K donk is canted forward for better weight distribution 2. Low maintenance and efficient, the Paralever rear end has become a mainstay across the BMW range of biggies 3. The Duolever front end separates braking and suspension dive with real accuracy 4. Pillion accommodation is pretty good with strong grabrails and reasonable padding 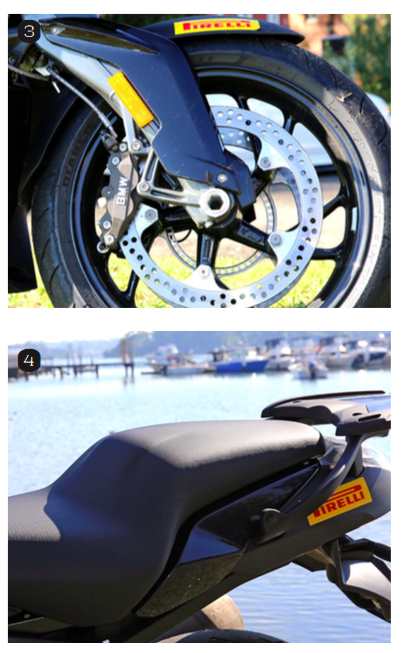