Race 1
From 13th place on the grid Toprak Razgatlioglu (Pata Yamaha WorldSBK Team) moved up to the podium positions in half a lap of a damp and treacherous Donington Park Race One, before taking the lead from Jonathan Rea (Kawasaki Racing Team) after just one and a half laps.
Determined to not let Razgatlioglu get way Rea was to run off track on the run down Craner Curves (having already had several moments on the entry to Redgate) and come back on track still in second place.
He started reeling in Razgatlioglu in the first quarter of the race but it was to be in vain as the Turkish rider won by over two seconds, while slowing up across the line. 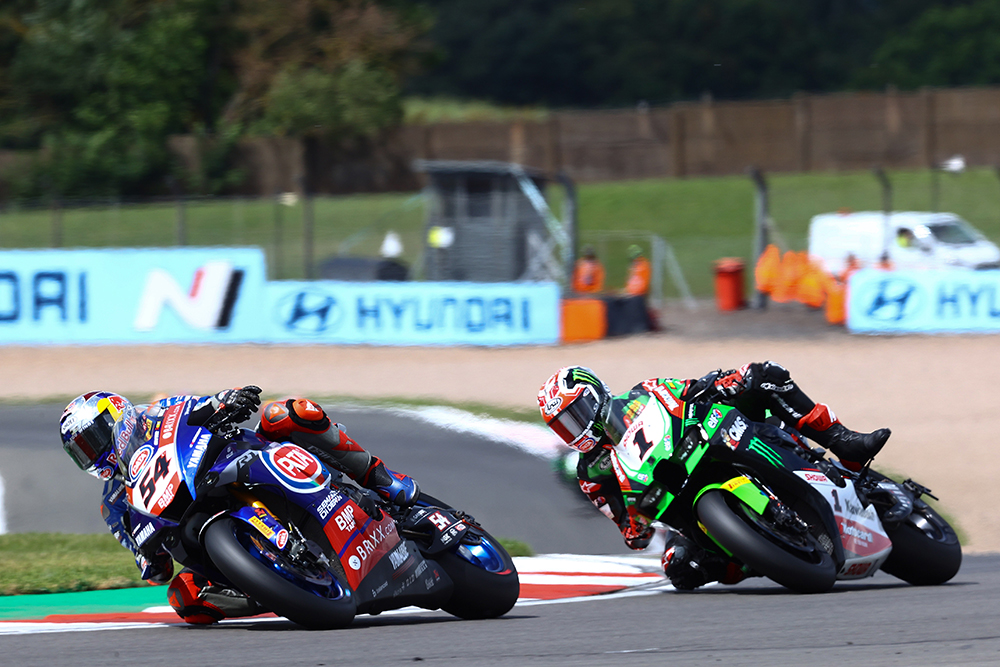 Garrett Gerloff (GRT Yamaha) fell from third place after a great fight for the podium positions and remounted to finish seventh. His front end loss at the Goddards hairpin let Alex Lowes (Kawasaki Racing Team) in to score his first podium since the first weekend of the season at Motorland Aragon.
Front row starters Tom Sykes and Michael van der Mark (BMW Motorrad) finished up fourth and fifth respectively, with VDM third for a time until he got passed by several riders in succession.
Leon Haslam (HRC Honda) was the top Honda rider in sixth place, in the same loose group as Van der Mark ahead of him and Gerloff behind. 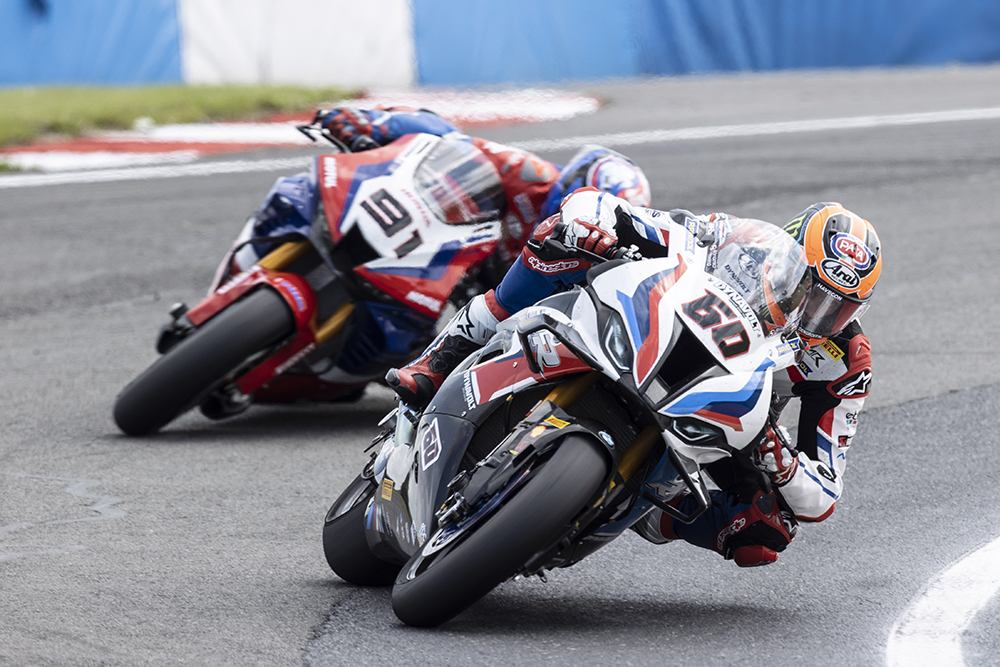 Alvaro Bautista (HRC Honda) was eighth, after being passed by a determined Gerloff. Independent riders Lucas Mahias (Kawasaki Puccetti Racing) and Axel Bassani (MotoCorsa Racing Ducati) completed the top ten places in race One, with Bassani also the top Ducati rider of all as Chaz Davies (Team GoEleven Ducati) was 11th and Michael Ruben Rinaldi (Aruba.it Racing – Ducati) 12th in a race that started out basically wet but ended up dry.
Andrea Locatelli (Pata Yamaha WorldSBK Team) crashed hard enough to tear the front end off his R1, while very earlier in the race Scott Redding (Aruba.it Racing – Ducati) had fallen after high-siding at the start of the run down the hill towards the Old Hairpin.
One off rider Luke Mossey (Outdo Kawasaki TPR) was 14th. 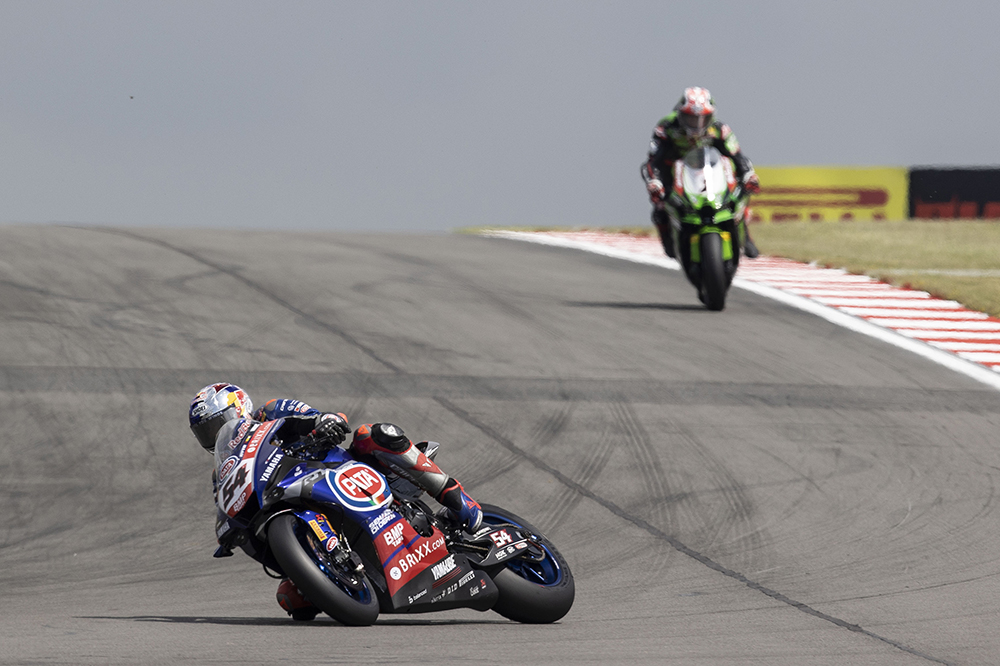 Superpole Race
Jonathan Rea (Kawasaki Racing Team) scored the ‘sprint’ race win on Sunday morning at Donington by a clear margin of over two seconds, from not one but two factory BMW riders. Tom Sykes (BMW Motorrad WorldSBK Team) and Michael van der Mark (BMW Motorrad WorldSBK Team) finished second and third respectively.
With most riders finally opting for intermediate tyres on the grid, but the occasional high profile name going for wets, the track stayed relatively dry over race distance.
A second lap crash from Alex Lowes robbed him of a seemingly certain runner-up spot behind Rea, as he clipped a white line at the base of the Old Hairpin and lost first the rear, then the front, on lap two. He restarted to finish 14th. 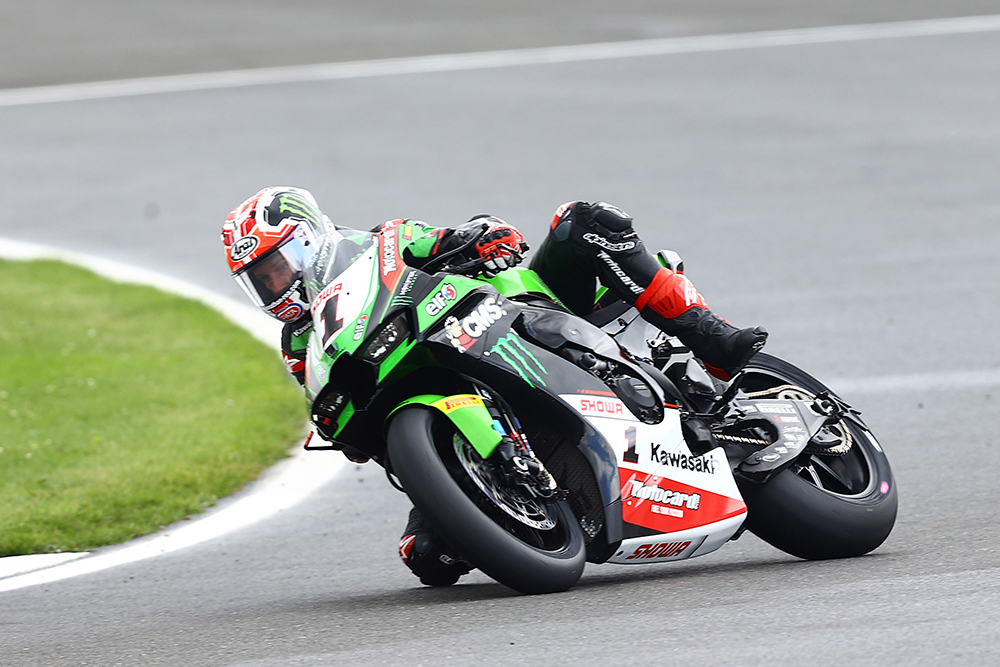 From then on, with Rea easing out the leading pace it was a fight for second place, with VDM and then Sykes most likely, and the English rider finally easing out enough of a lead to make the runner-up spot certain.
Leon Haslam (HRC Honda) was in podium contention for almost the whole race, pushing hard behind VDM but still a strong fourth place in the final results, just under four seconds from Rea.
Garrett Gerloff (GRT Yamaha) was fifth and Saturday race winner Toprak Razgatlioglu (Pata Yamaha WorldSBK Team) sixth, unable to make the kind of early push that would have given him the potential for a sprint race win.
With lots of changes of tyre options on the grid, as the possibility of more rain continued, Razgatlioglu was originally said to be on wets but had made a very late change to intermediate tyres. 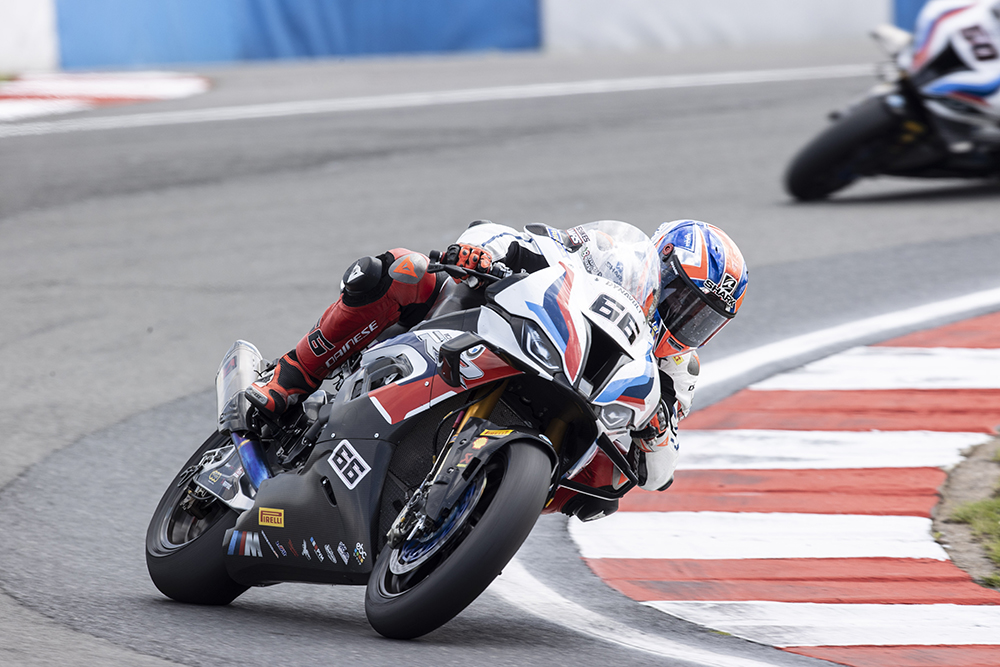 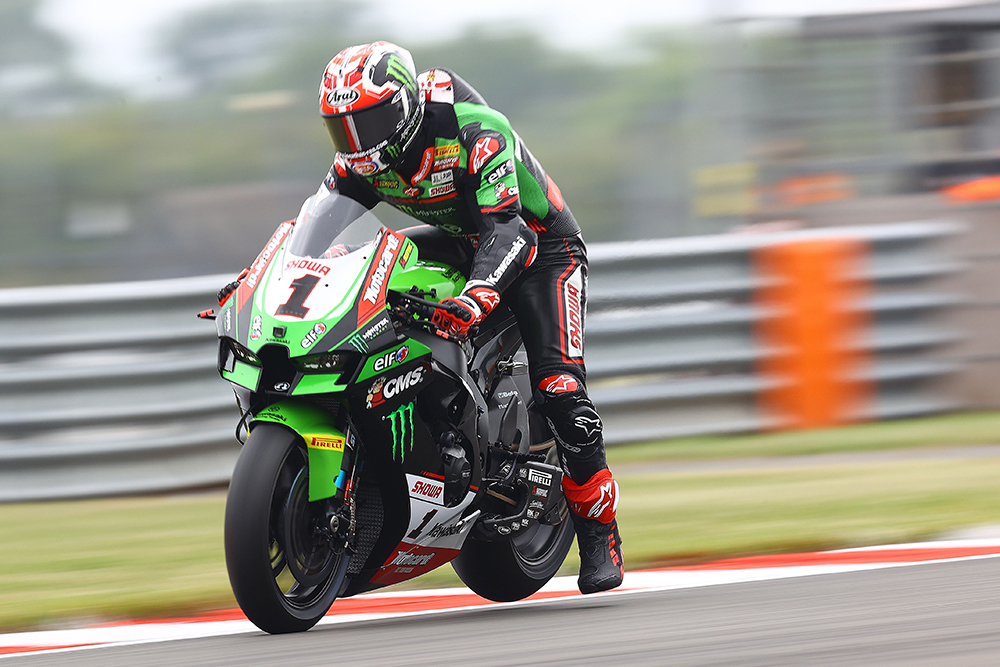 Race 2
A crash while leading from Jonathan Rea (Kawasaki Racing Team) gifted a clear track to Toprak Razgatlioglu (Pata Yamaha WorldSBK Team) and the Turkish star needed no second invitation to romp away and win his second race of the Donington weekend.
Garrett Gerloff (GRT Yamaha) came through from outside the podium places to score second place, 2.243 seconds back from Razgatlioglu.
Tom Sykes (BMW Motorrad WorldSBK Team) won a tense final battle for the final podium place, from the upwardly mobile Scott Redding (Aruba.it Racing – Ducati). A slide and running wide into the Melbourne loop on the final lap prevented his last chance of a passing manoeuvre after 23 laps and he was fourth. 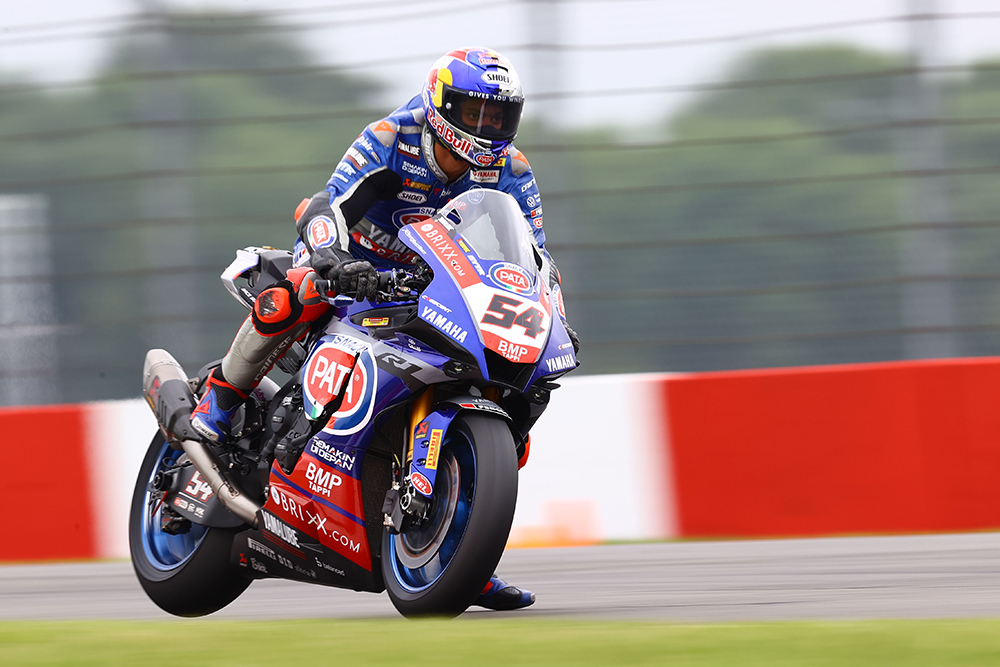 Early in the race Razgatlioglu and Rea made a short but clean break from the other leading contenders, as the two men at the head of the championship points table occasionally fought each other.
Rea retook the lead with 14 laps to go, at Coppice, as Razgatlioglu ran wide on the entry.
On the same corner of Coppice Rea was to fall on lap 11, restarting his bike but finishing outside the points. 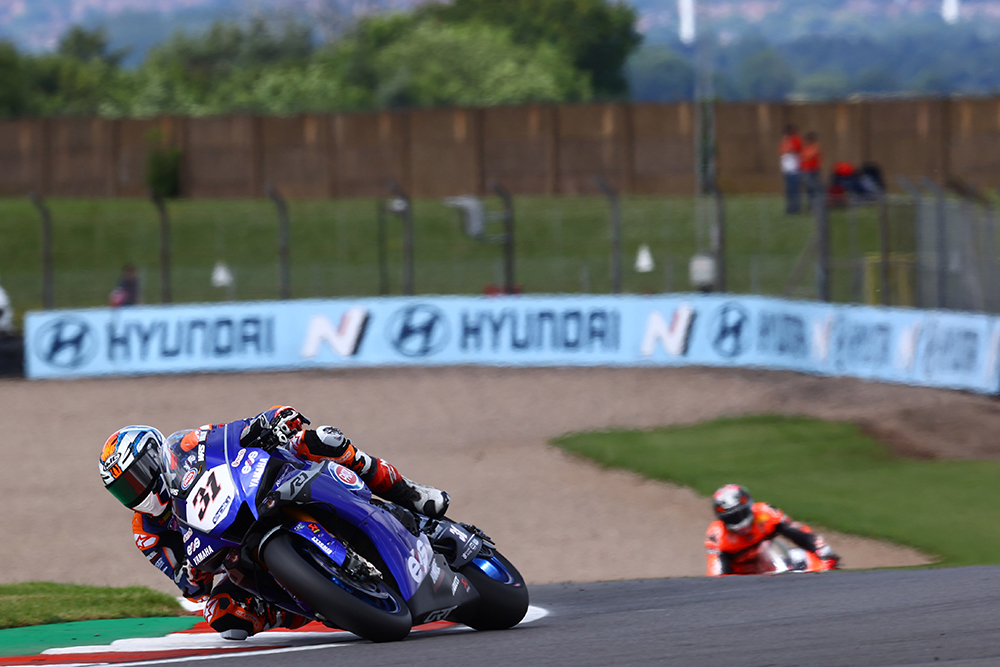 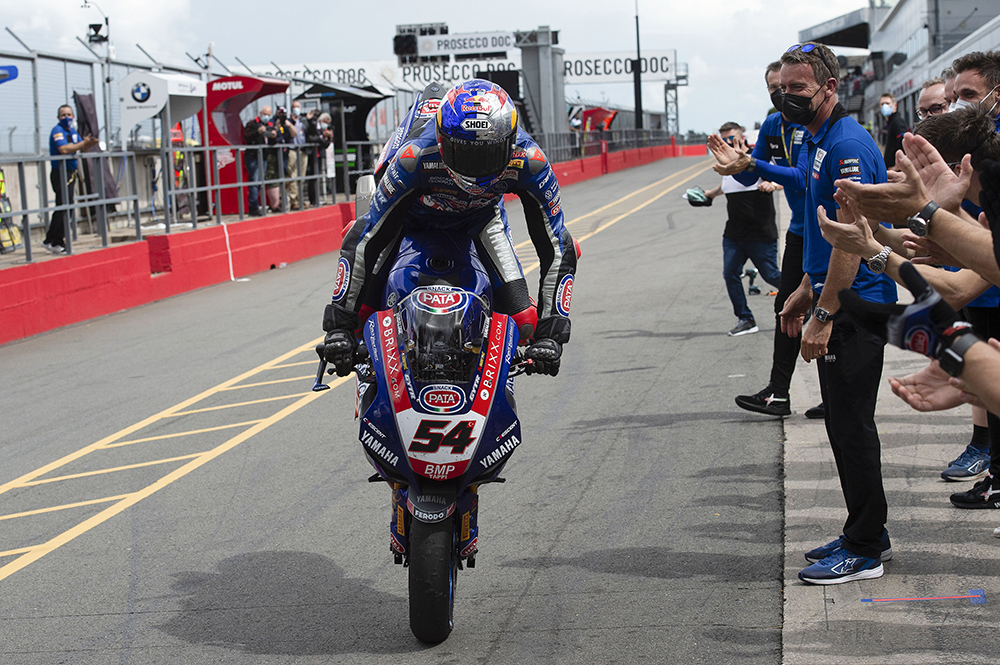