Jonathan Rea has won the first race at Assen from pole position but he had to fight hard with his main championship rival Toprak Razgatlioglu (Pata Yamaha WorldSBK Team) for a time, as Scott Redding (Aruba.it Racing – Ducati) also looked a potential race winner until Rea eased away out front with a three-second advantage. 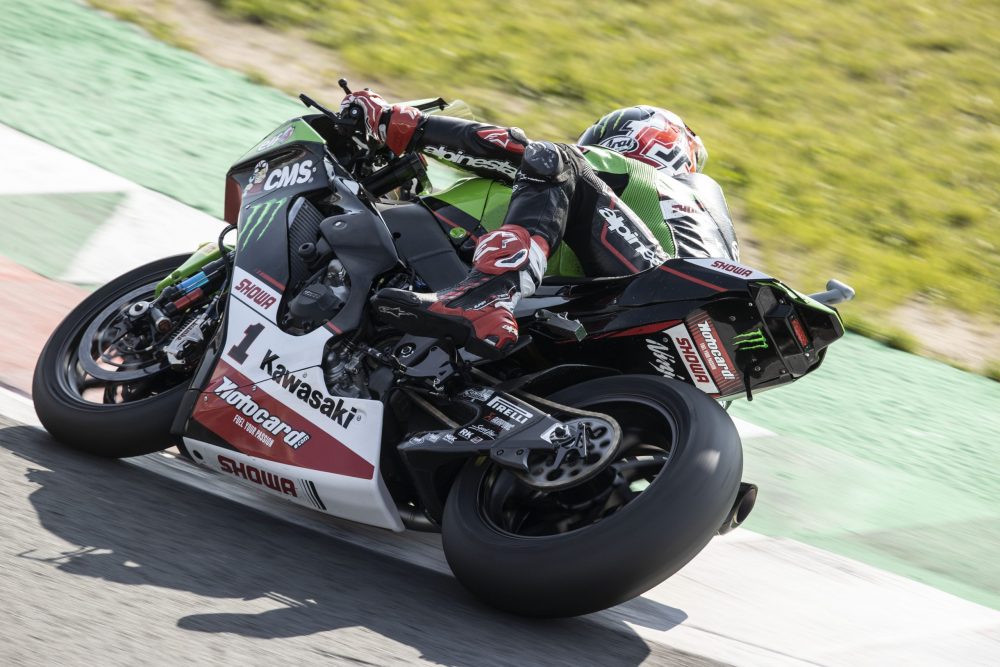 His 13th career race at this Dutch track was not in doubt even though the red flag appeared because Jonas Folger (Bonovo Action by MGM Racing BMW) fell fast and hard, stopping the race after 19 of the planned 21 laps. Redding was second and Razgatlioglu third, with a sliding front tyre. Michael van der Mark (BMW Motorrad WorldSBK Team) pushed hard from a third row start but could not quite get into leading contention, finishing fourth. Andrea Locatelli (Pata Yamaha WorldSBK Team) scored a strong fifth place, six seconds from Rea, with back row starter Garrett Gerloff (GRT Yamaha) rushing through to finish sixth. 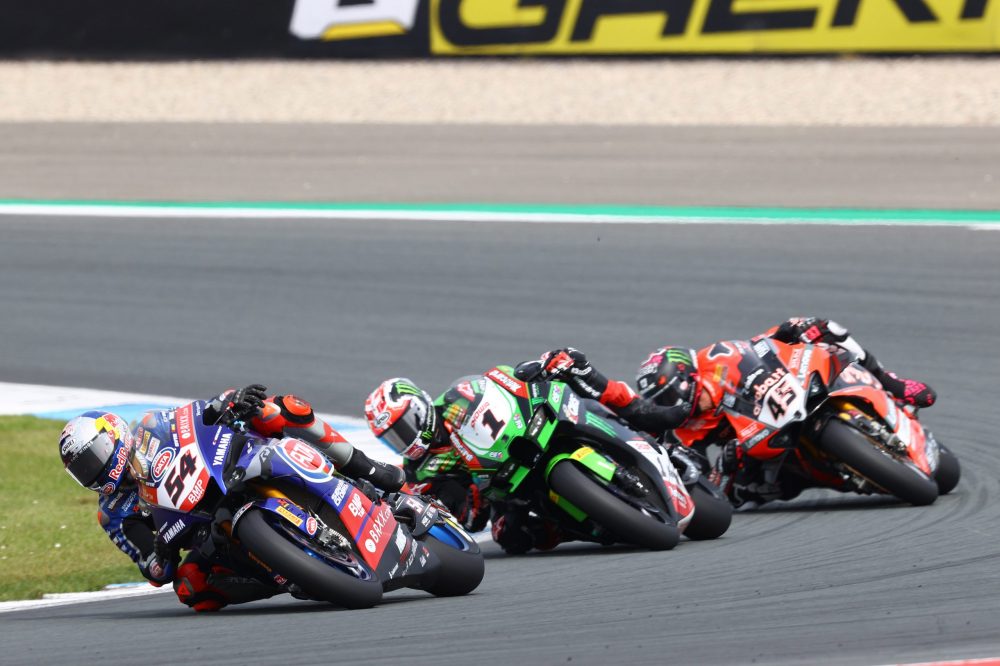 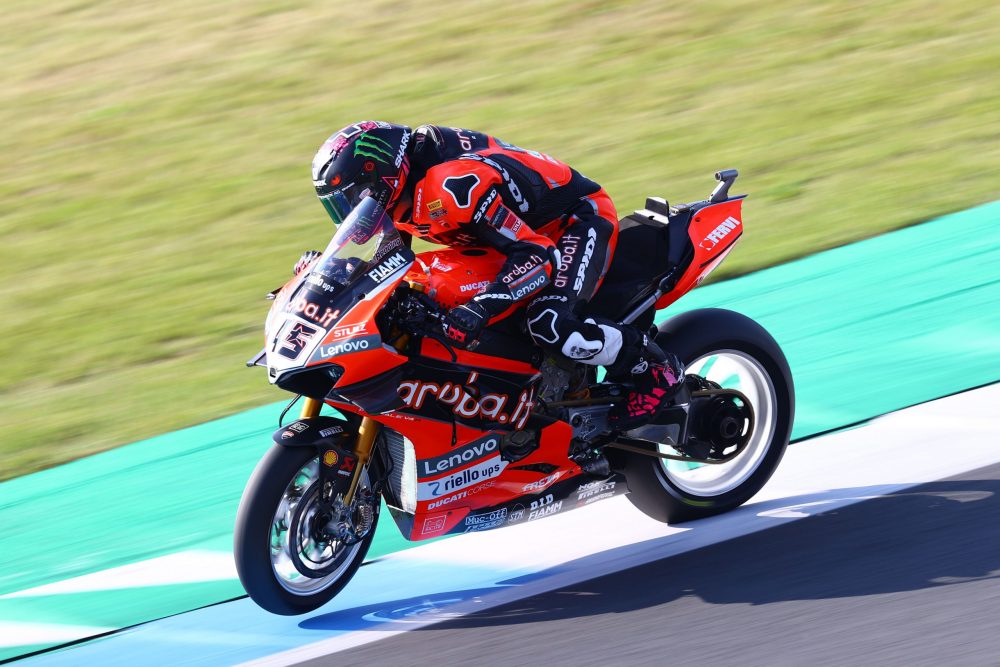 Jonathan Rea (Kawasaki Racing Team) scrapped at the start with Michael Ruben Rinaldi (Aruba.it Racing – Ducati) and Toprak Razgatlioglu (Pata Yamaha WorldSBK Team) but he did his usual disappearing act in the second half of the race and won by almost three seconds.
Initially, Rea’s win was from Razgatlioglu and the pugilistic Andrea Locatelli (Pata Yamaha WorldSBK Team) but the final podium order changed to Rea-Rinaldi-Razgatlioglu.
Both factory Yamaha riders were docked one position for straying – marginally as it appeared – onto the track limits green paint on the final corner, forcing Locatelli off his first podium. 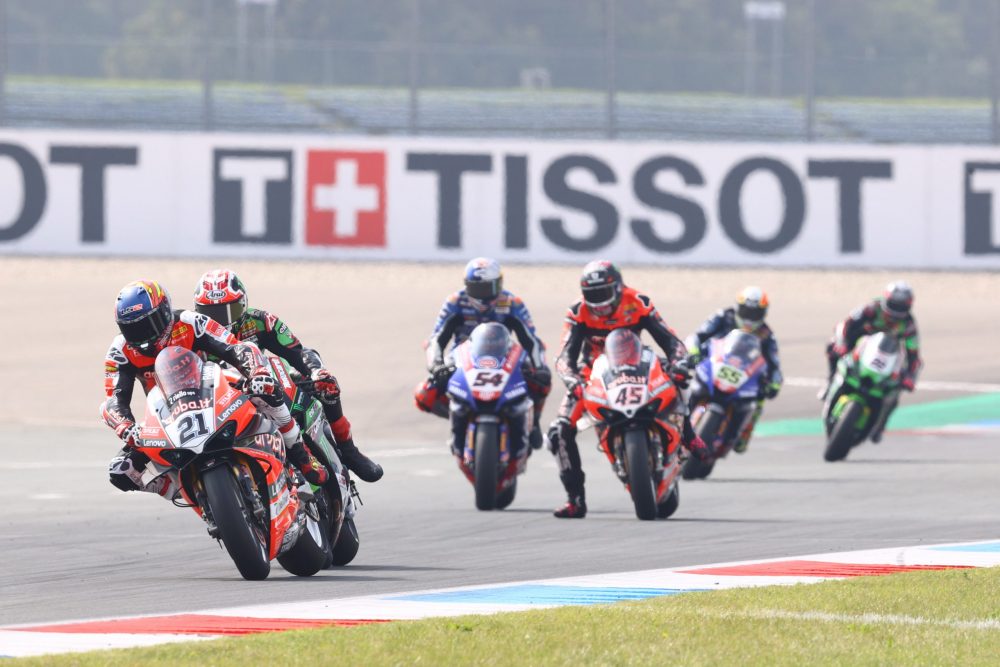 Scott Redding, a potential podium man himself dropped off the final pace for fifth place on his official Ducati. Alex Lowes (Kawasaki Racing Team) was sixth, on the tail of Redding.
Behind the top six group Tom Sykes (BMW Motorrad WorldSBK Team) got the better of Garrett Gerloff (GRT Yamaha) and both riders started the final race of the weekend from the third now, not the back row after their Saturday Superpole disasters.
Chaz Davies (Team GoEleven Ducati) and Axel Bassani (MotoCorsa Racing Ducati) completed the top ten after Tito Rabat (Barni Racing Ducati) had dropped his fast early pace to finish 11th. 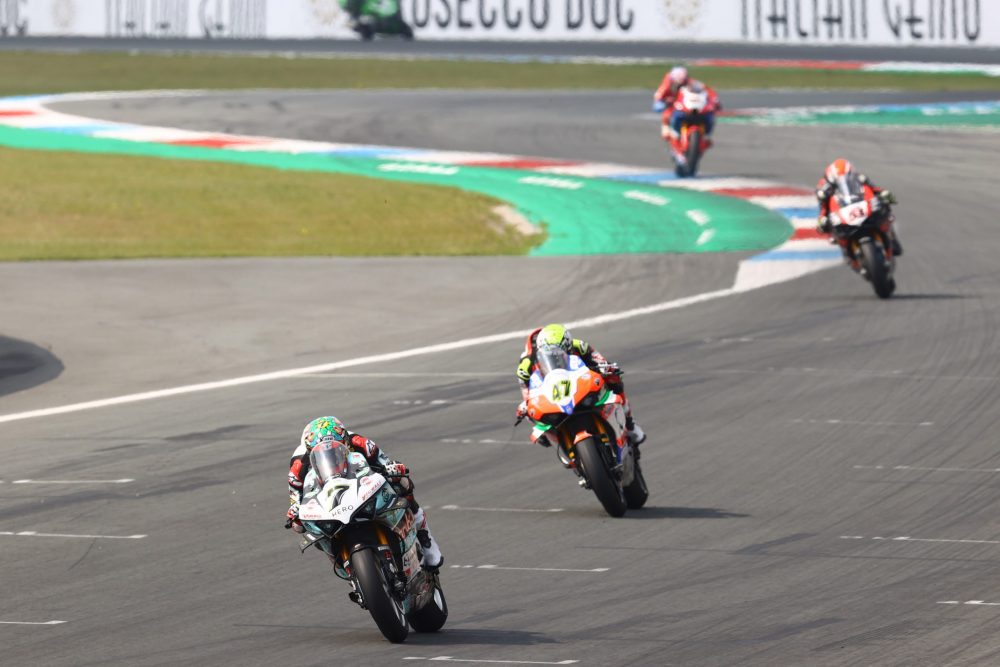 Leon Haslam (HRC Honda) was 12th and his teammate Alvaro Bautista crashed again and restarted to finish 18th and last. Local hero Michael van der Mark (BMW Motorrad WorldSBK Team) crashed and was the only non-finisher.
Lucas Mahias (Kawasaki Puccetti Racing) did not ride as his race one crash broke his scaphoid bone and he is already in France to have surgery. 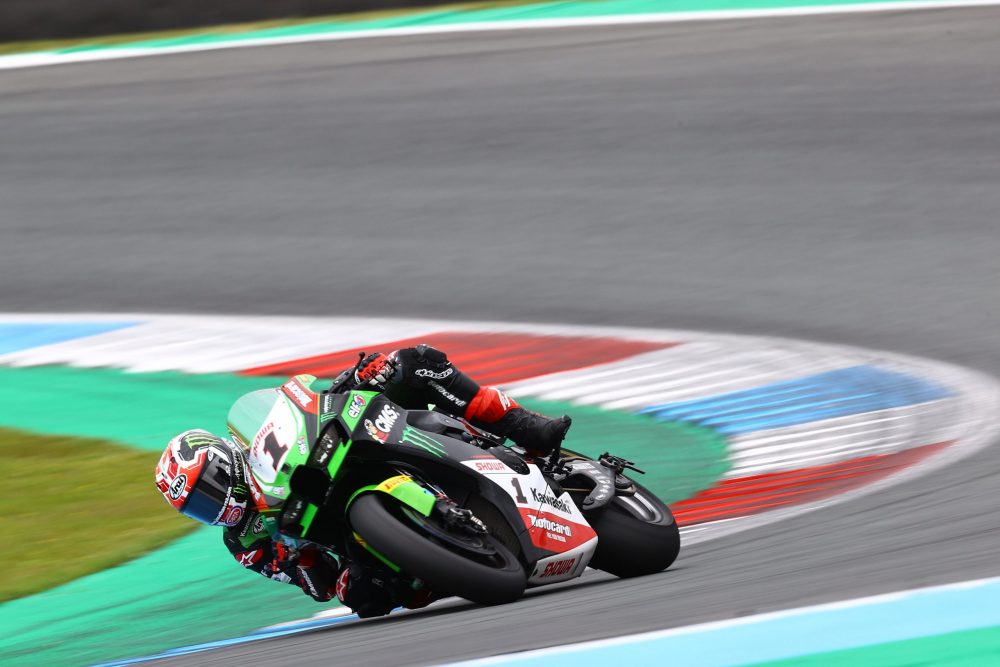 Jonathan Rea (Kawasaki Racing Team) won his third race in three attempts at Assen this weekend after some battles in the early laps, in what was another dramatic race from start to finish.
A crash into T1 on lap one between Garrett Gerloff (GRT Yamaha) and Toprak Razgatlioglu (Pata Yamaha WorldSBK Team) put the Turkish rider out of the race and got Gerloff punished by a ride-through penalty. Gerloff too would eventually fall and no score.
With Rea’s main championship contender out of contention, the race leader was a surprise package in the first laps – Andrea Locatelli (Pata Yamaha WorldSBK Team). 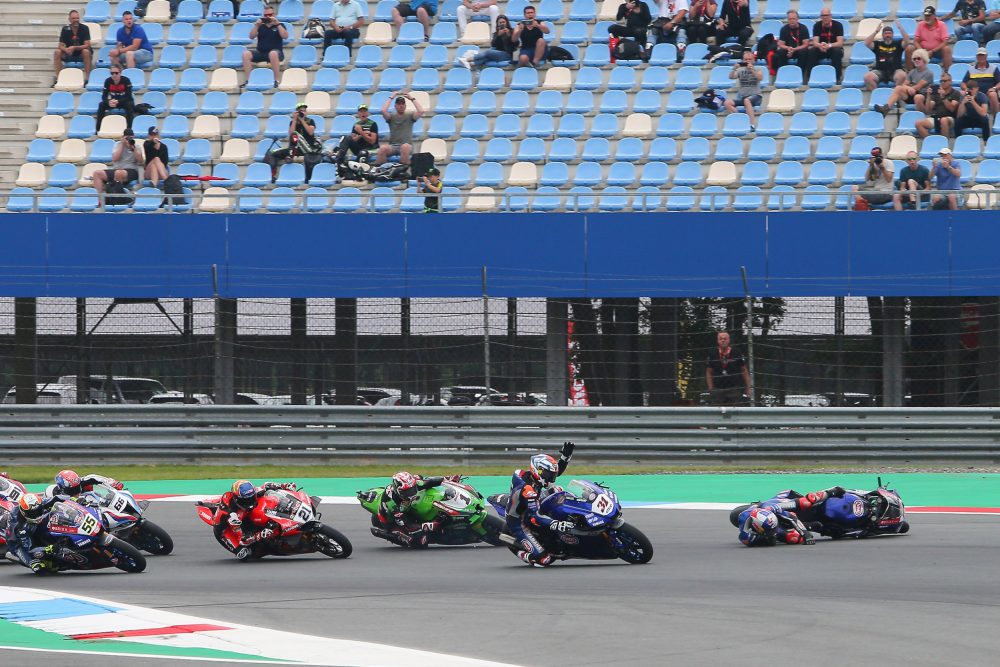 Rea slowly clawed back time to him, having made a rear tyre choice change from softer to harder from Saturday to Sunday, and eventually, Scott Redding (Aruba.it Racing – Ducati) overhauled the slowing Michael Ruben Rinaldi (Aruba.it Racing – Ducati), who had opted for an X rear tyre.
Redding would, like Rea, catch and pass Locatelli at the end with the 1-2-3 after all 21 dry laps reading Rea, Redding and Locatelli.
Fast starting Alex Lowes (Kawasaki Racing Team) got overhauled by Chaz Davies (Team GoEleven Ducati) who then hunted down Rinaldi for fourth place at De Strubben on lap 10 of 12. 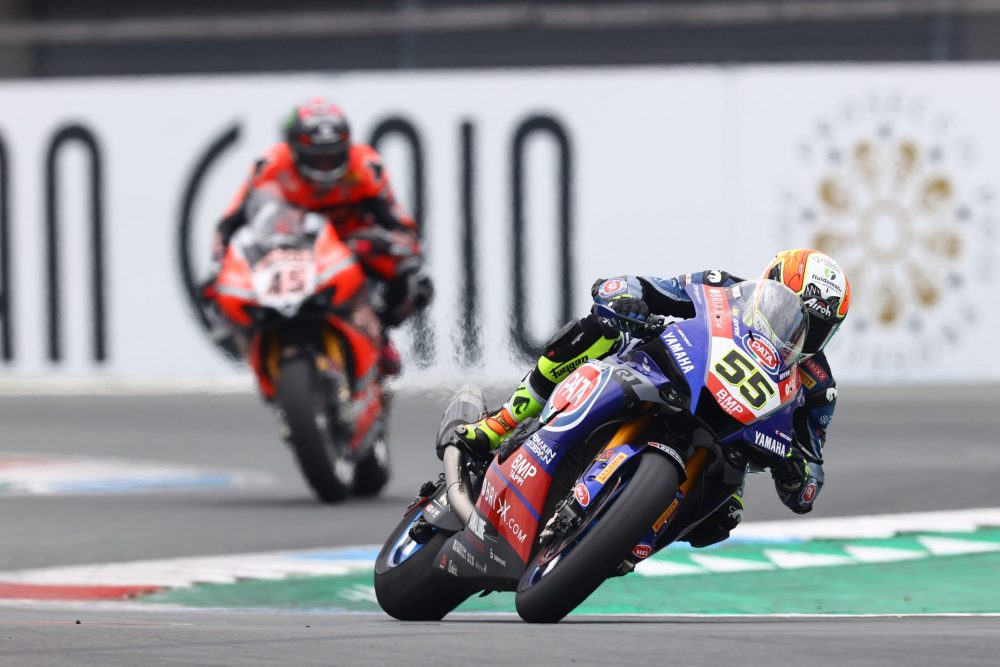 A plucky fight from Alvaro Bautista (HRC Honda) saw him finish fifth to save his no-scoring weekend, in some regards. Lowes would fade to finish seventh as Michael van der Mark (BMW Motorrad WorldSBK Team) transformed his early fortunes to enter the top six, heading of Lowes and Rinaldi, who had pushed his X rear tyre too hard in the early laps. Ninth was Ducati privateer Axel Bassani (MotoCorsa Racing Ducati) and tenth Leon Haslam (HRC Honda). 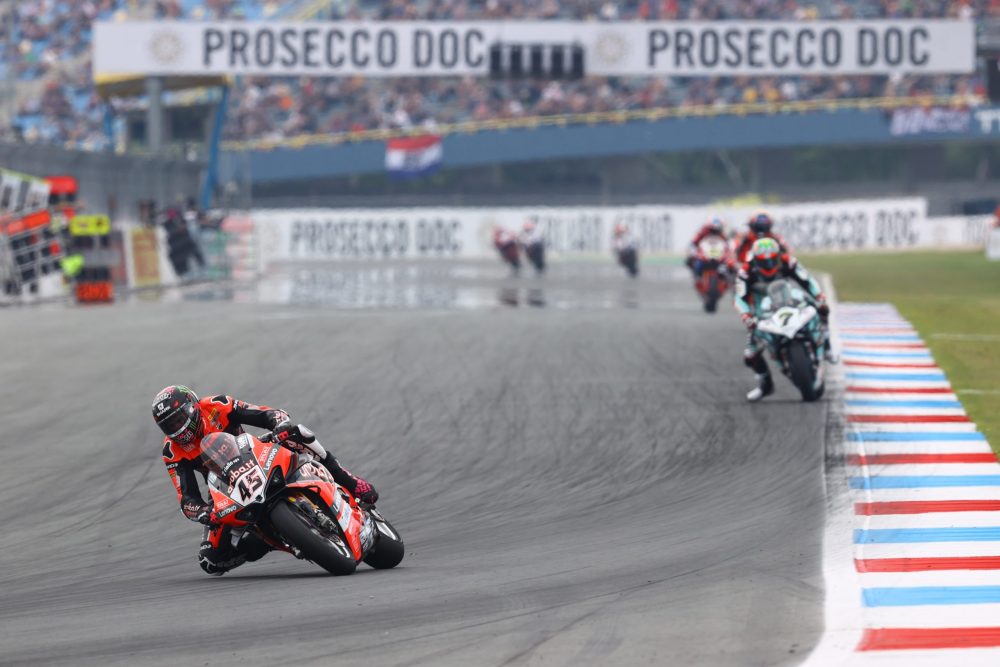 In the championship standings, Rea has 243 points, Razgatlioglu an unchanged 206, Redding 162 and Lowes 127. The championship now moves to the Czech Republic for round six on 6-8 August 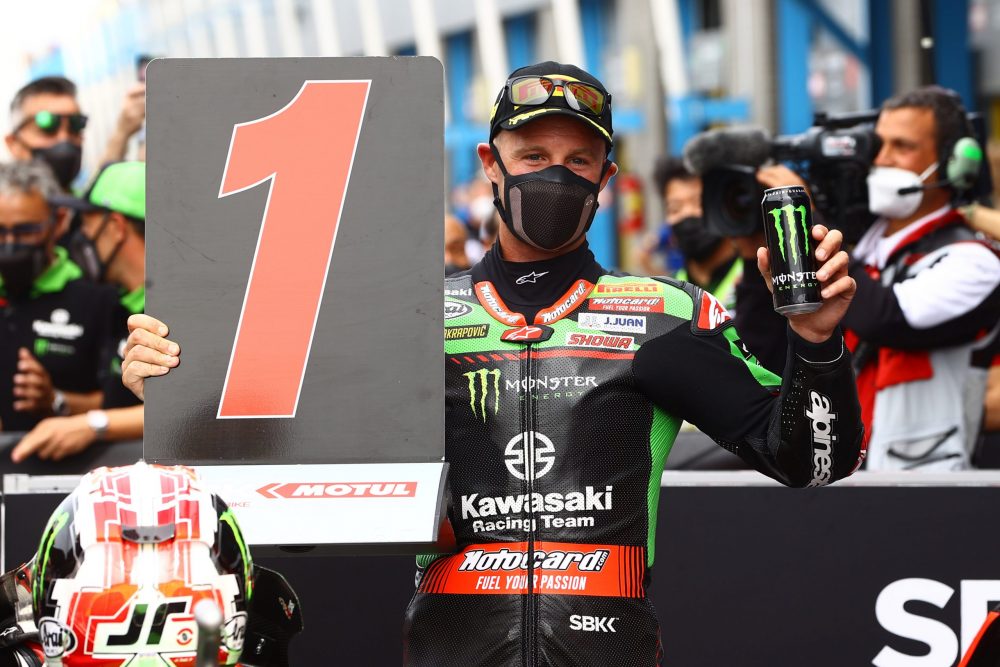