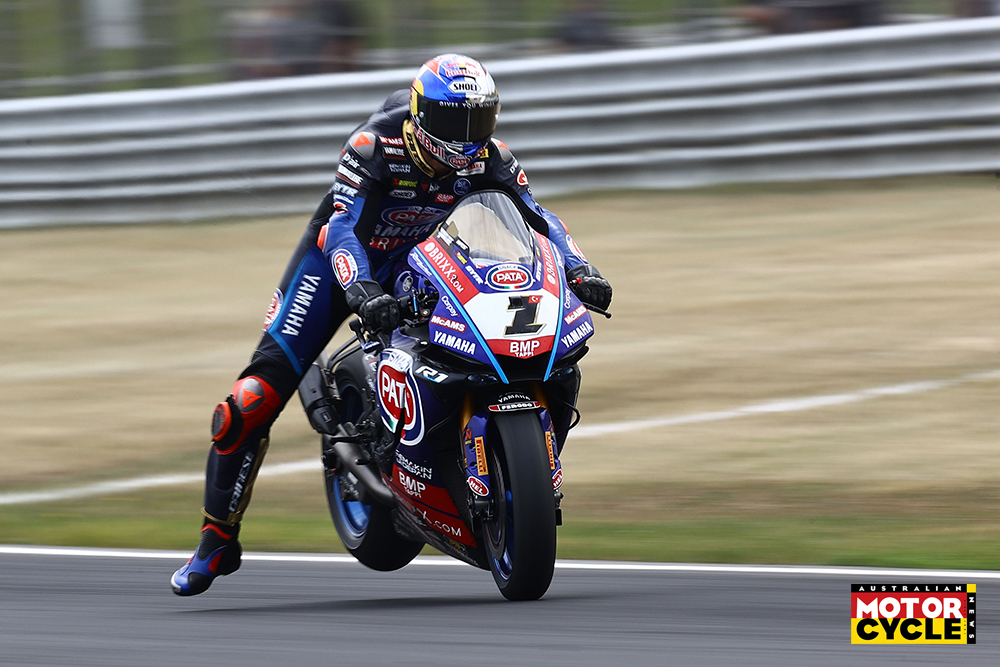 Toprak Razgatlioglu (Pata Yamaha WorldSBK Team) secured the fastest time in the first day of WorldSBK action at Most in the Czech Republic – going faster then the old Superpole record after the first part of the circuit had been resurfaced recently. His new best is a 1’31.506.

The lead of the final Friday session changed a few times and with the rise of Scott Redding (BMW Motorrad WorldSBK Team) continuing after his Donington podium, he was second overall in the combined times, 0.227 seconds back from Razgatlioglu. 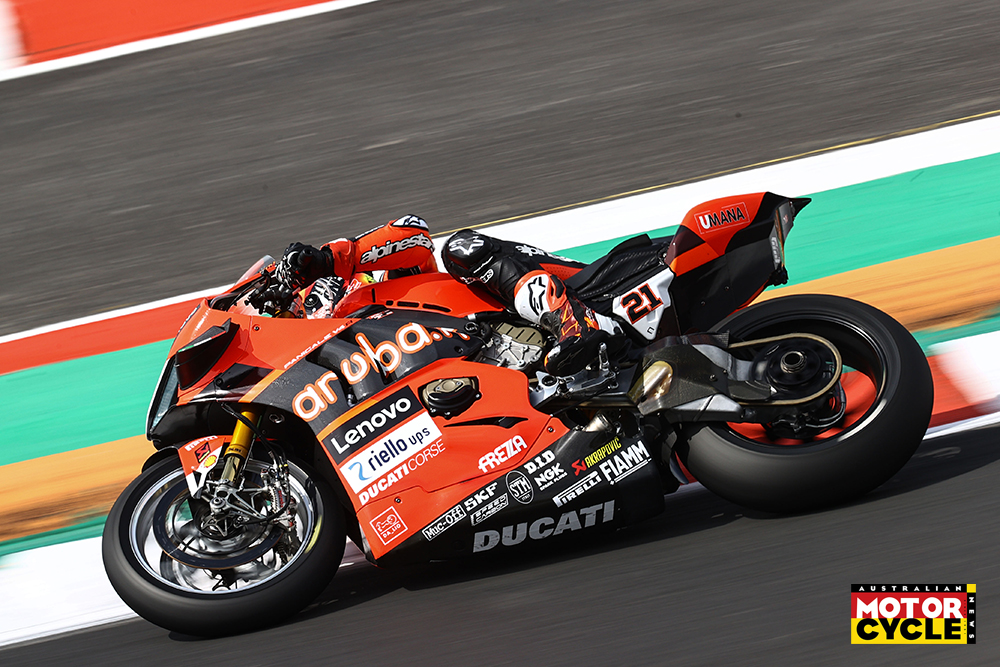 Jonathan Rea (Kawasaki Racing Team) had to rely on his morning time to go fifth overall.

Top Independent rider was Loris Baz (Bonovo Action BMW) in sixth place, proving how much the BMW had improved in recent times.

Garrett Gerloff (GRT Yamaha) was ninth, and like Rea, he had to rely on the morning session for his personal best time. 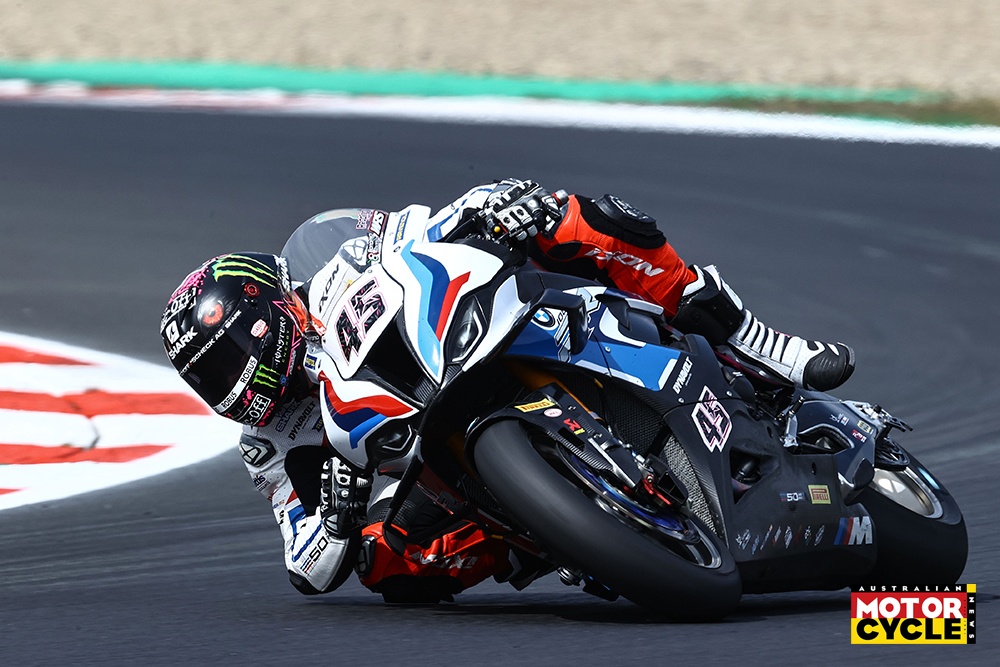 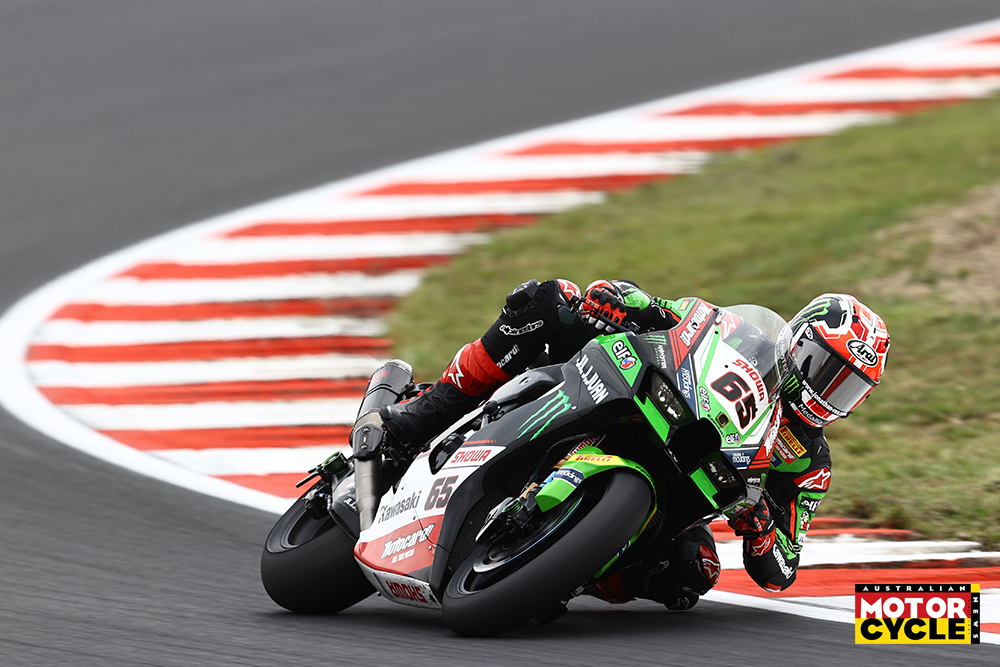 After overnight rains the track was still wet in several places in FP3, so some riders like Rea and eventual seventh placed Superpole qualifier Scott Redding (BMW Motorrad WorldSBK Team), sat out the morning session completely.

All riders found a dry track surface for Superpole, but there were no SCQ rear tyres (both qualifiers and potentially Superpole race tyres) at this round, with the softest ones available being the SCX. 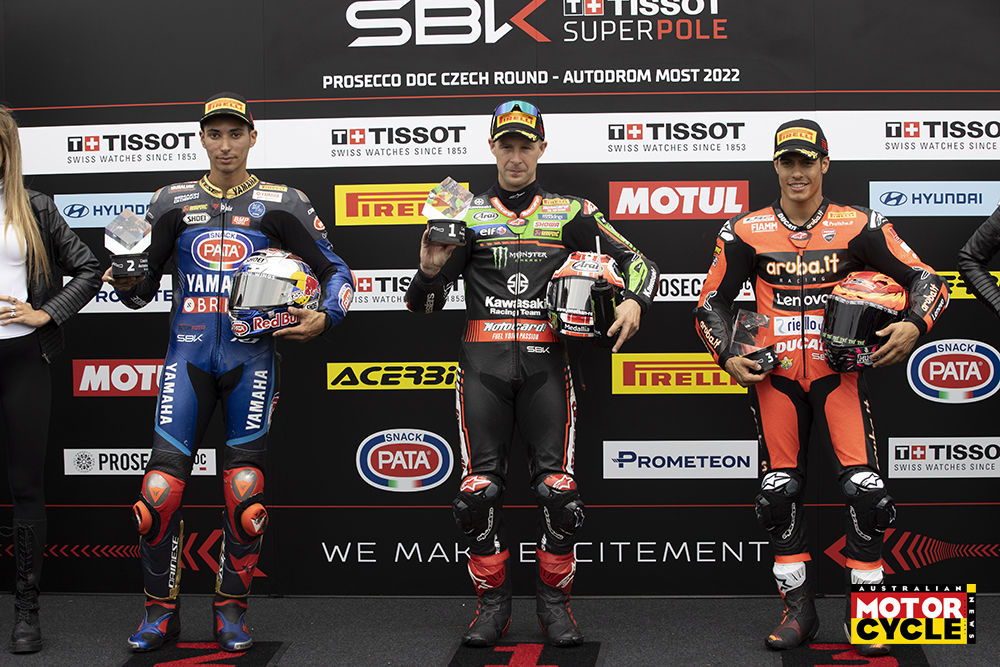 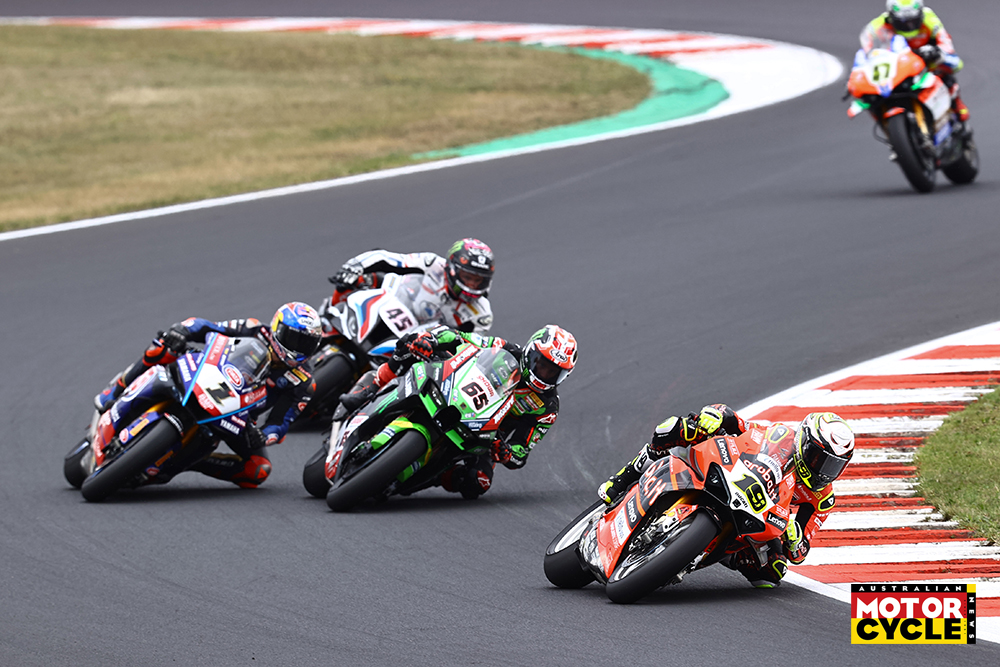 In a race that would give Ducati a new record of 1000 WorldSBK podiums, Alvaro Bautista (Aruba.it Racing – Ducati) would go from third to a clear victor after playing a clever long game while all around him fought it out all the way to the flag.

Scott Redding (BMW Motorrad WorldSBK Team) had to take to the track limits to stay in contention for another BMW podium as Razgatlioglu passed inside of him on a long right hand corner. 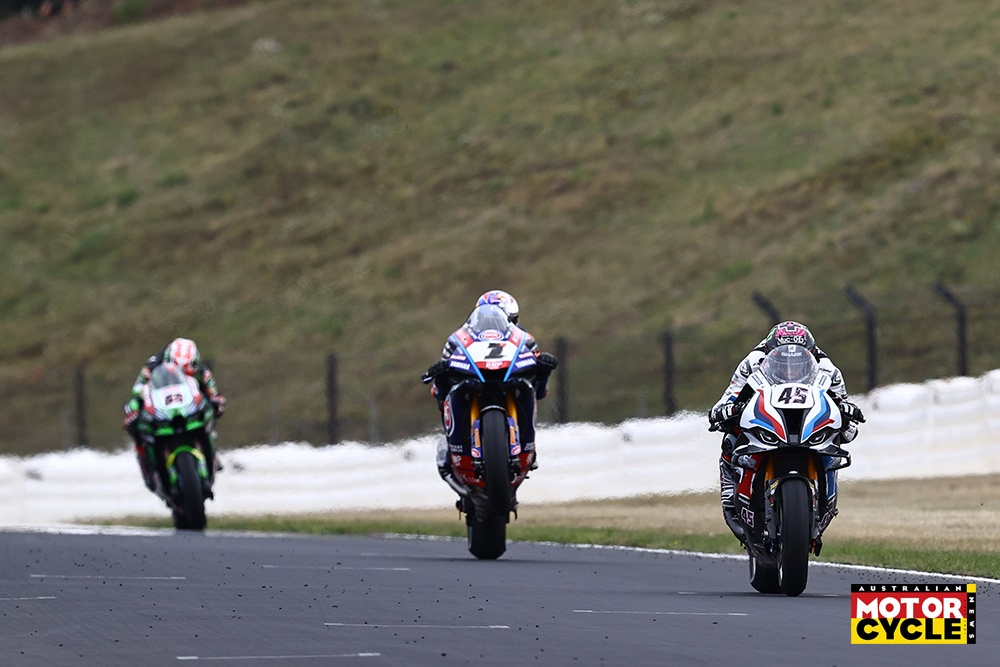 Redding’s troubles were not at an end as frequent leader and podium contender Jonathan Rea (Kawasaki Racing Team) had two good goes at taking third spot, on the very last lap, but ended up finishing fourth.

Rea and Razgatlioglu had fought it out for the first few laps and their battle allowed first Bautista and then Redding to close in, even as spots of rain fell around the track. They came to little and the track was basically dry, as the fast lap times proved.

Bautista set a remarkable 1’31 lap with three to go to ensure his victory. 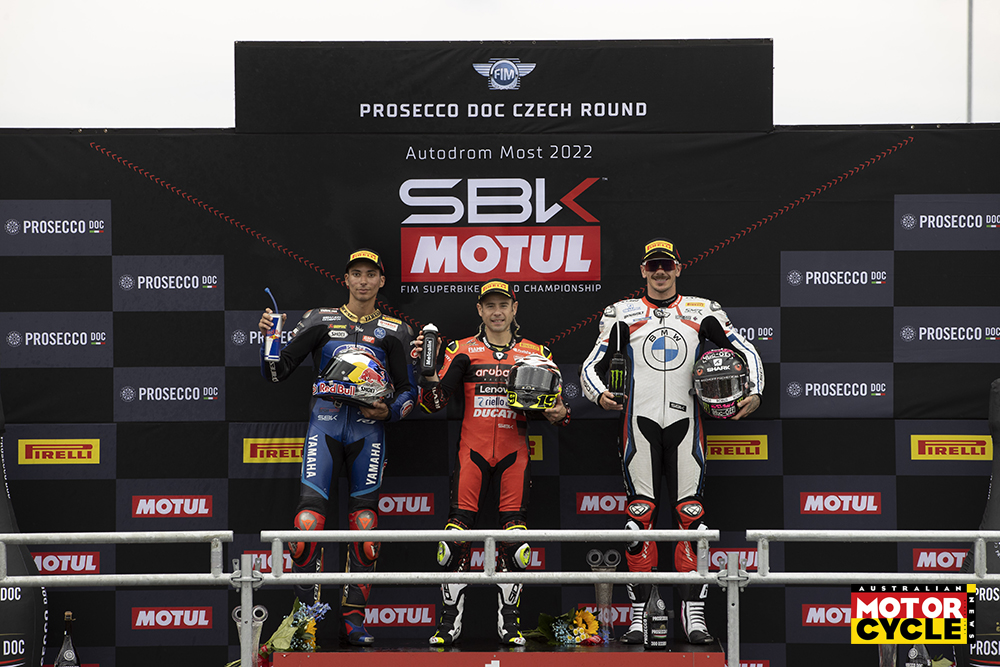 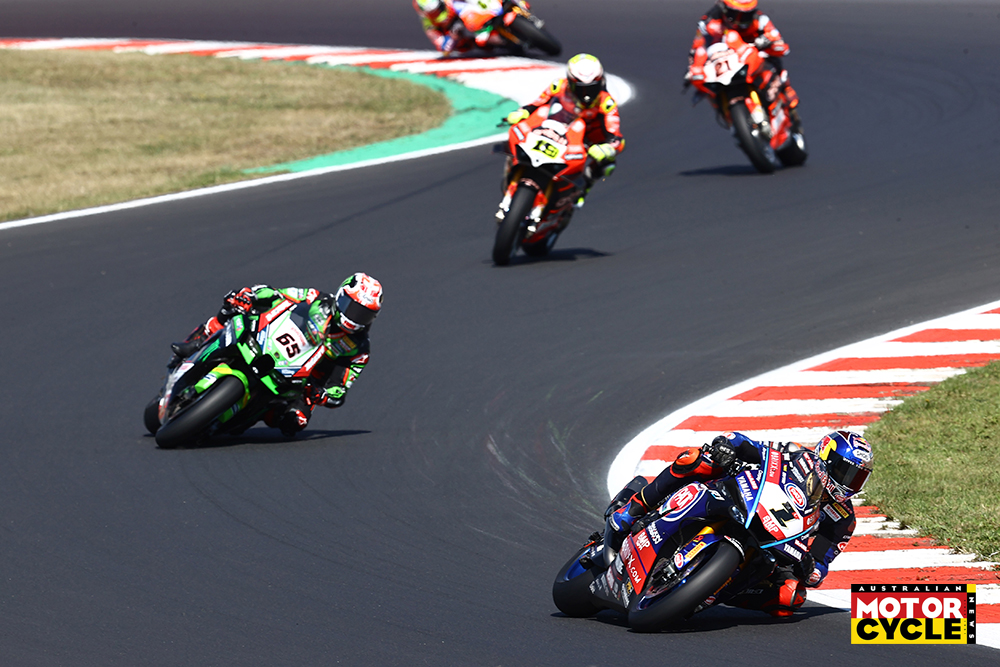 Rea looked like he may have got the job done with a pass under braking into Turn One on the final lap but Razgatlioglu went inside as soon as he could. As they entered a downhill right with only a few corners to go Rea tried to squeeze his way on the inside, despite Razgatlioglu dangling his inside leg off the footpeg, showing very little available track surface. Rea merely ran wide on the next left and off the track.

He ran through the gravel, then over the dry grass, and got back onto the track second, to finally make it to the line in runner-up position. 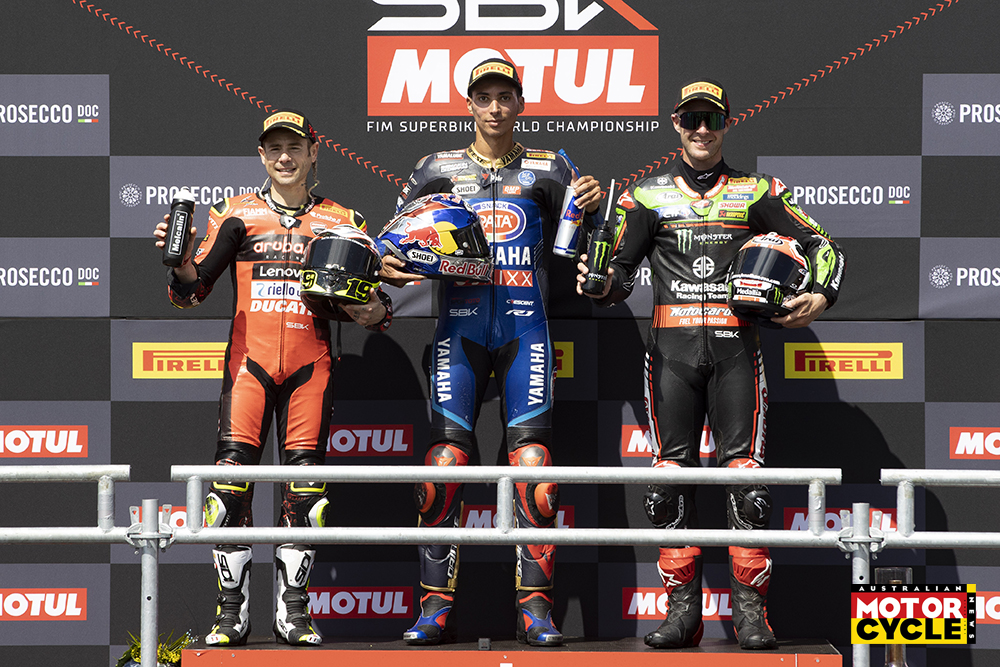 Three Way Fight Of The Year 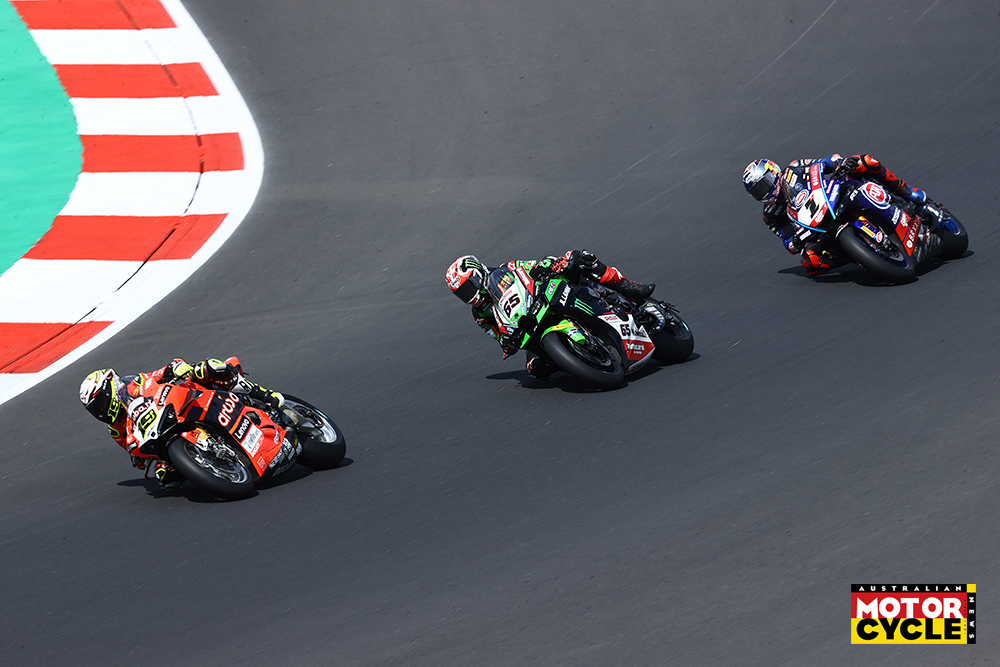 The top three riders of 2022 had a three-on-three fight from the start to nearly the finish of Race Two at Most, with Toprak Razgatlioglu (Pata Yamaha WorldSBK Team), Alvaro Bautista (Aruba.it Racing – Ducati) and Jonathan Rea (Kawasaki Racing Team) eventually finishing in that order.

It was again crowd-pleasing, thrilling racing, with every advantage and disadvantage of each bike and rider combo on plain view across 4.212km of the Czech countryside.

Rea had to get past some early traffic but relatively quickly after the green light and championship contenders were lined up together.

Bautista had even run off at the infamous turn one, and had to rejoin via the slip road. 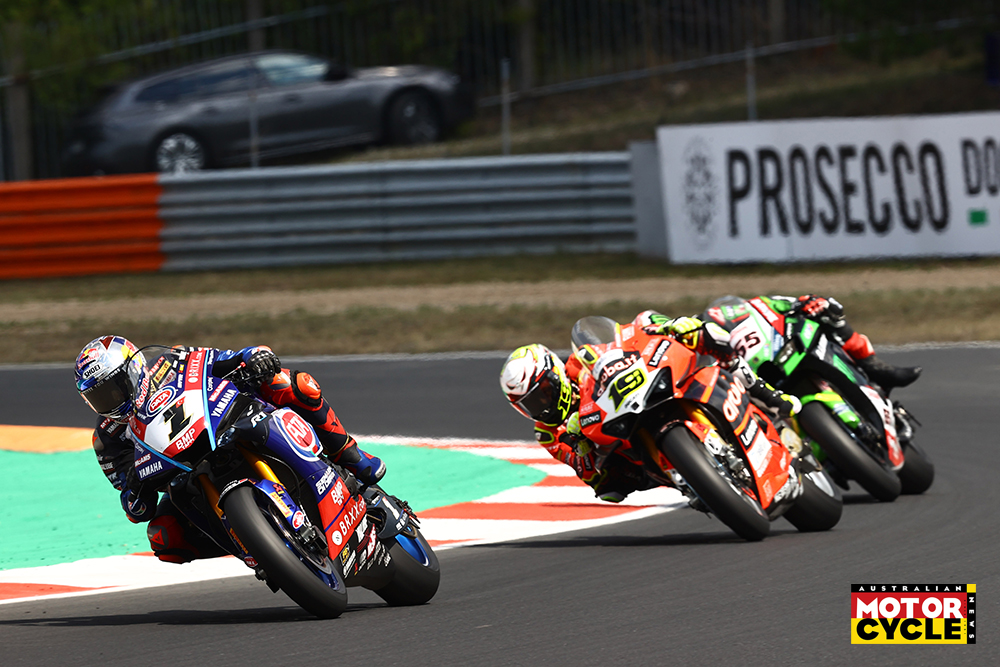 As Bautista closed in and then took the lead it looked like it may have been another Ducati benefit for him. But even from third place, Toprak had other ideas, as he passed first Rea and then Bautista, piling on pressure that saw him 0.714 seconds ahead of Bautista (and the closely following Rea) with three laps to go.

Bautista had nothing left to catch him with and took second, with Rea dropped off in third place, ending up 2.833 seconds behind the winner.

No podium return for Scott Redding (BMW Motorrad WorldSBK Team) on Sunday but his pace on the M spec BMW made it four different manufacturers in the top four places just before the summer break comes along. 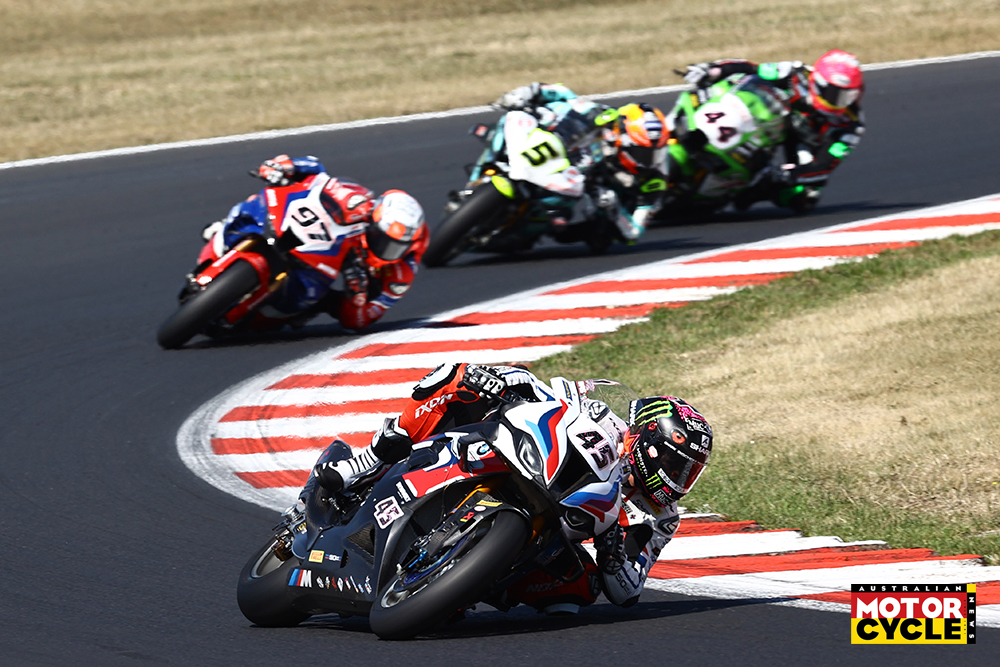 Axel Bassani (MotoCorsa Racing Ducati) was on course for a top four at one stage but Redding proved resurgent. Bassani’s fifth place made him the top independent rider, and well over five seconds ahead of the second factory Yamaha ridden by Andrea Locatelli (Pata Yamaha WorldSBK Team). 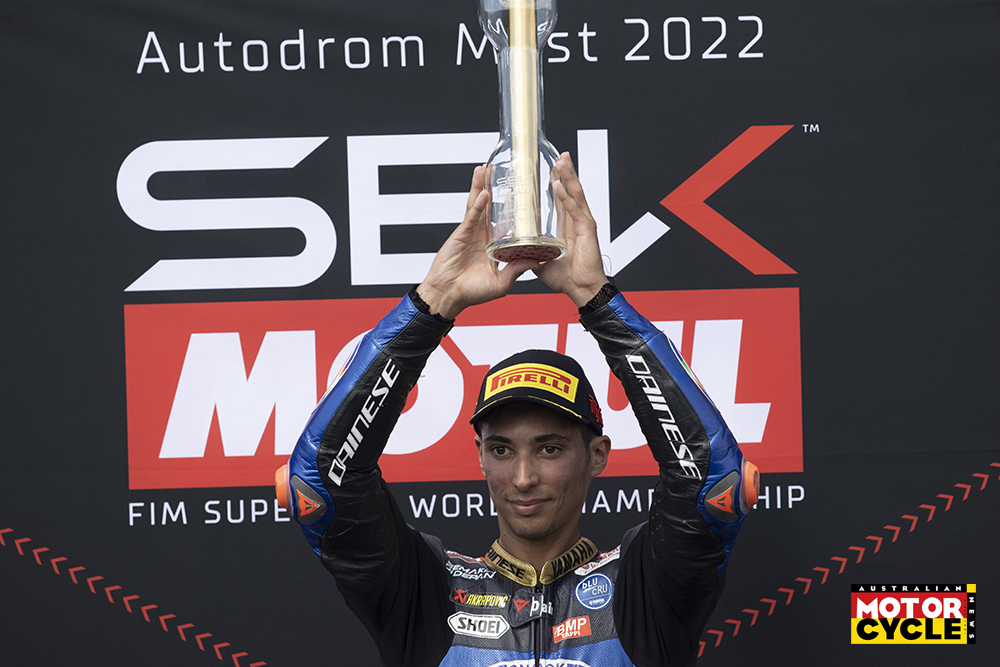 In the championship points overall, Bautista now has 298, Rea 267 and Razgatlioglu 260 – 38 points cover the top three as the summer break begins. Alex Lowes (Kawasaki Racing Team) did not do Race Two due to illness. 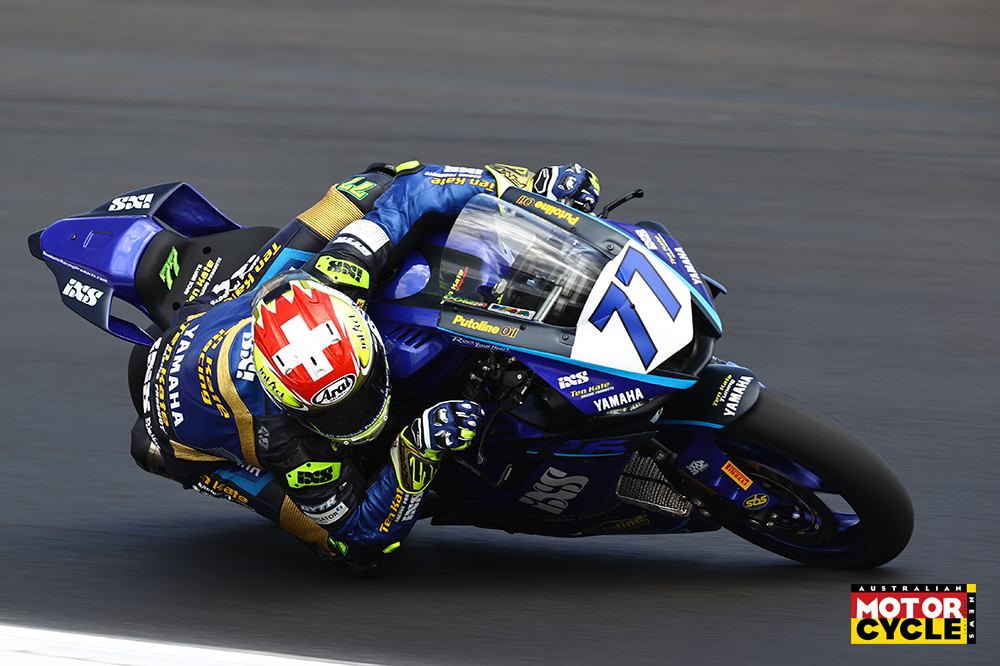 Dominique Aegerter (Ten Kate Racing Yamaha) was once again the lead rider in WorldSSP, with the 2021 champion holding off not one but two fast Ducatis to lead the combined Friday time sheets at the 4.212km long Most circuit.

The warm and sunny conditions delivered a consistent day for the riders to evaluate the new first section of asphalt, keeping the leading times close in the top three fight. 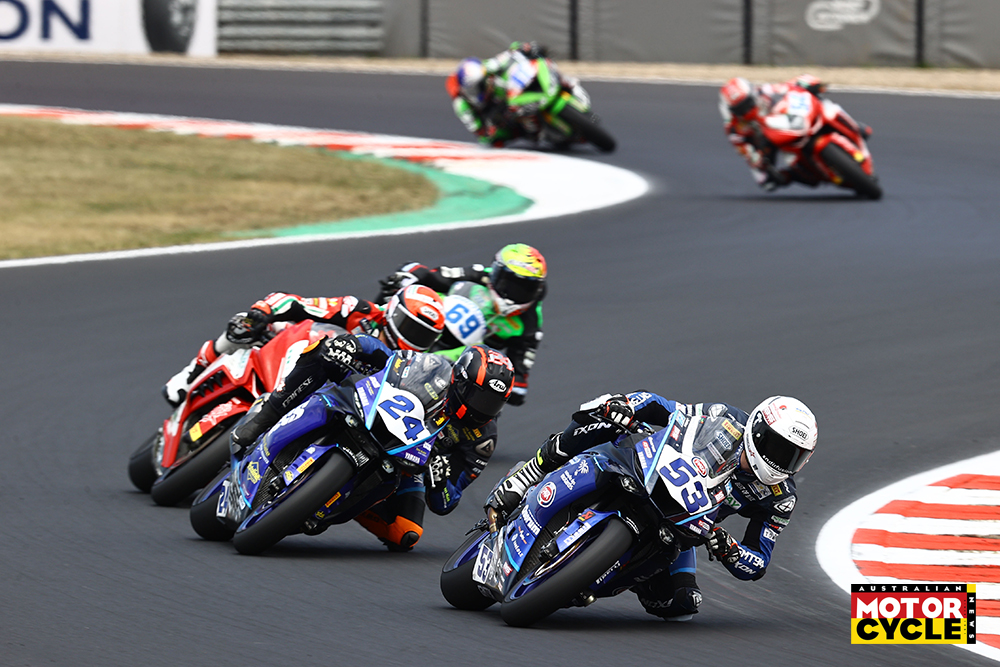 The quickest Kawasaki rider was once more Can Öncü (Kawasaki Puccetti Racing) in sixth place in the early rankings. 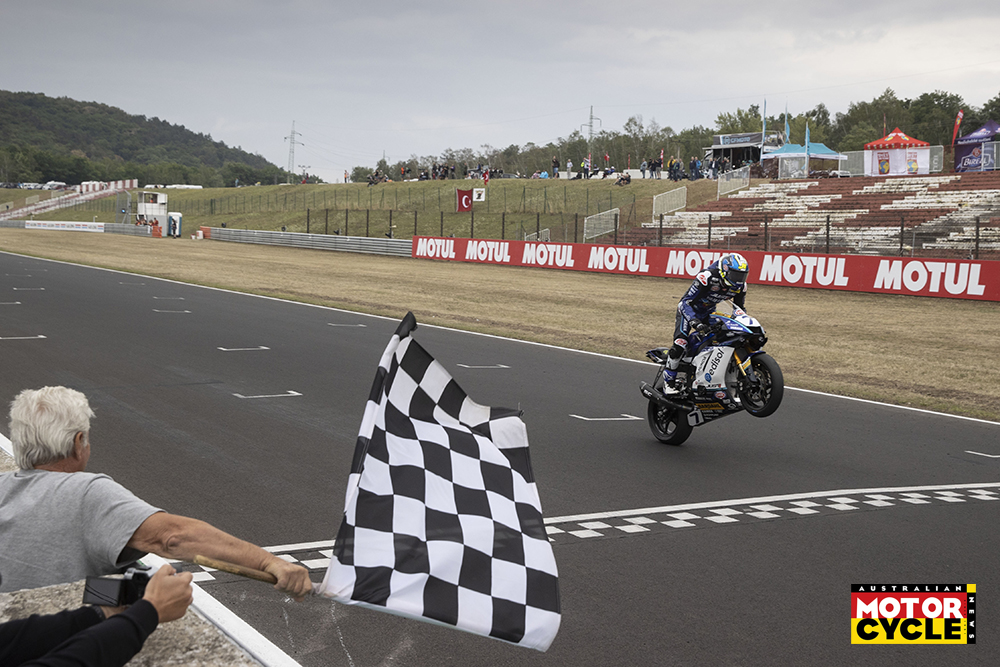 The Italian fans reduce the name of Lorenzo Baldassarri (Evan Bros. WorldSSP Yamaha) to his nickname ‘Balda’. Some riders just behind him at Turn One/Lap One of the first WorldSSP Race in Most thinned out the field of competitors, allowing Balda to make good his escape and win by over six seconds.

It was his second career WorldSSP win, and one with great significance as Dominique Aegerter (Ten Kate Racing Yamaha) was one of those taken out in the first corner melee at the incredible tight chicane entry from the startline.

Aegerter is still 39 points ahead of Balda, but the worst news for the Swiss is that he has been declared unfit (concussion) and will miss Sunday’s second Most WorldSSP race unless cleared by the medical team.

Yari Montella (Kawasaki Puccetti Racing) was another taken out of the race in Turn One, as was Raffaele De Rosa (Ducati Orelac Racing VerdNatura) and Federico Caricasulo (Althea Racing Ducati).

With some top names and already proven podium riders no-scoring, other riders could shine. 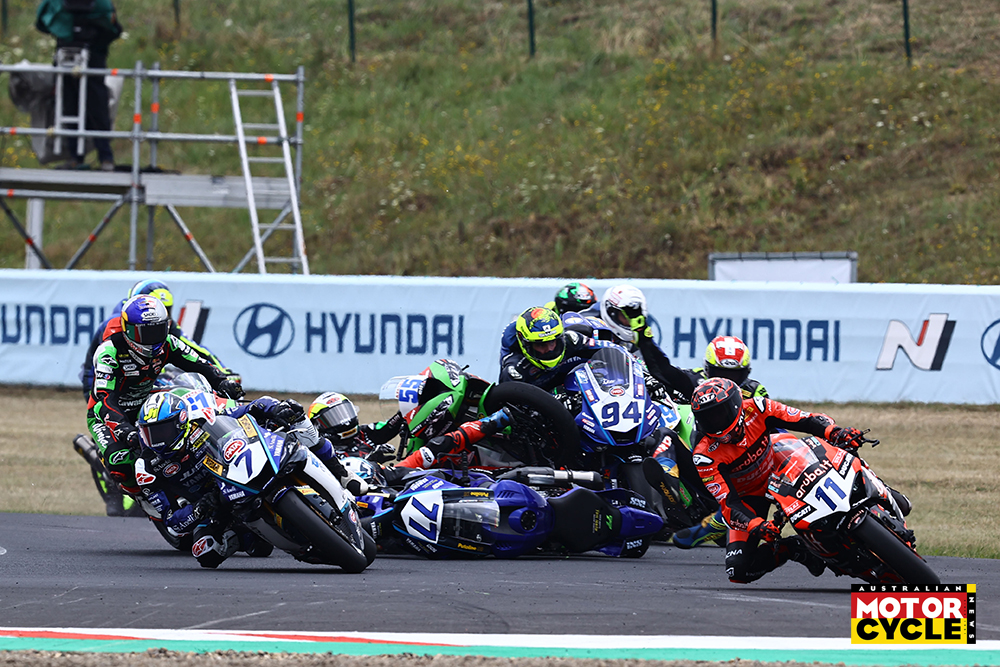 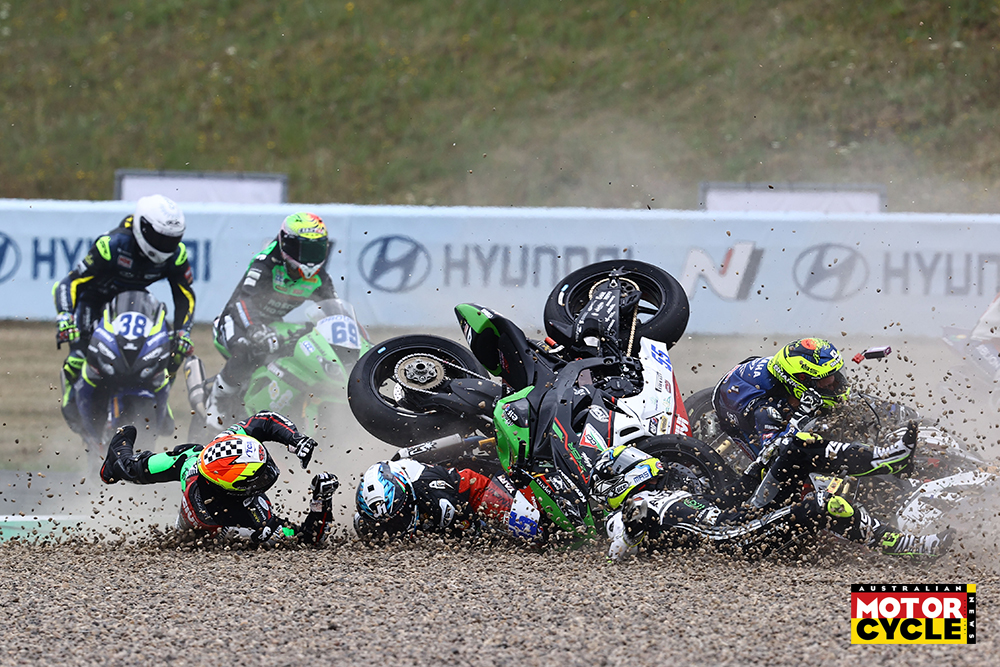 Another rider making a stand-in appearance in the Czech Republic, Valentin Debise (GMT94 Yamaha) was third, as part of a three rider group fighting for the final podium place.

WorldSSP rookie Adrian Huertas (MTM Kawasaki) was eighth, 8.6 seconds behind the winner as he continues to grow into his new riding role.

Race Two takes place at Most on Sunday 31 July.

Baldassarri Closes The Gap On Day Of Dramas 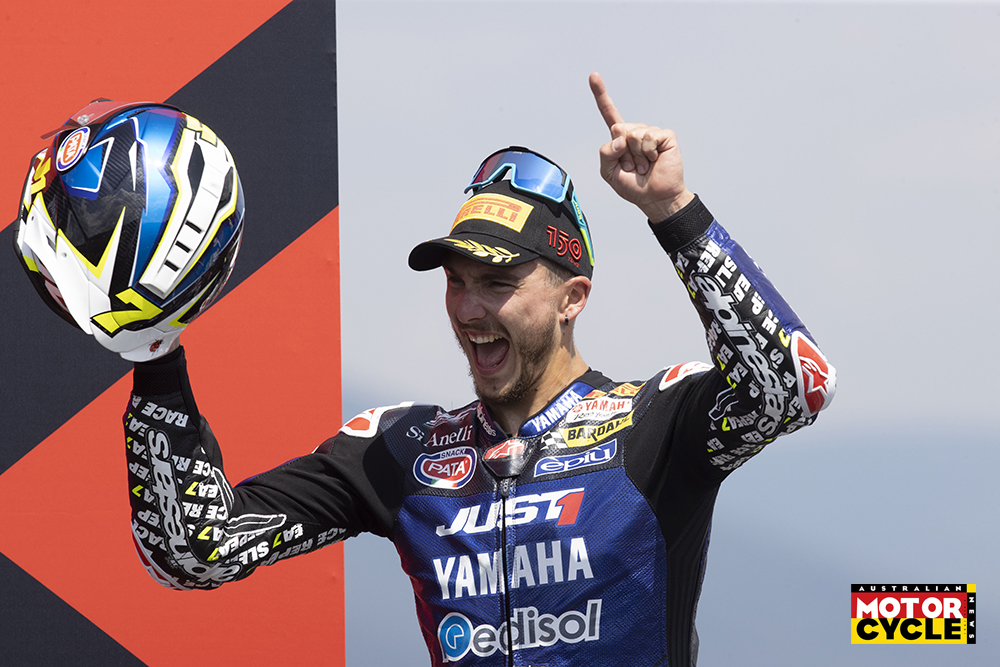 Lorenzo Baldassarri (Evan Bros. WorldSSP Yamaha) took his second race win of the weekend at Most after a day of controversy that was rounded out by a red flag finish on lap 15 – just as he had passed long time leader Nicolo Beluga (Aruba Racing Ducati).

The elusive first Ducati win in WorldSSP under its new technical regulations is still spectral, but it seems to be getting a more solid prospect every weekend.

This was the perfect opportunity for anybody but Dominique Aegerter (Ten Kate Racing Yamaha) to record a race win as the clear World Championship leader was banned from riding in Race Two. 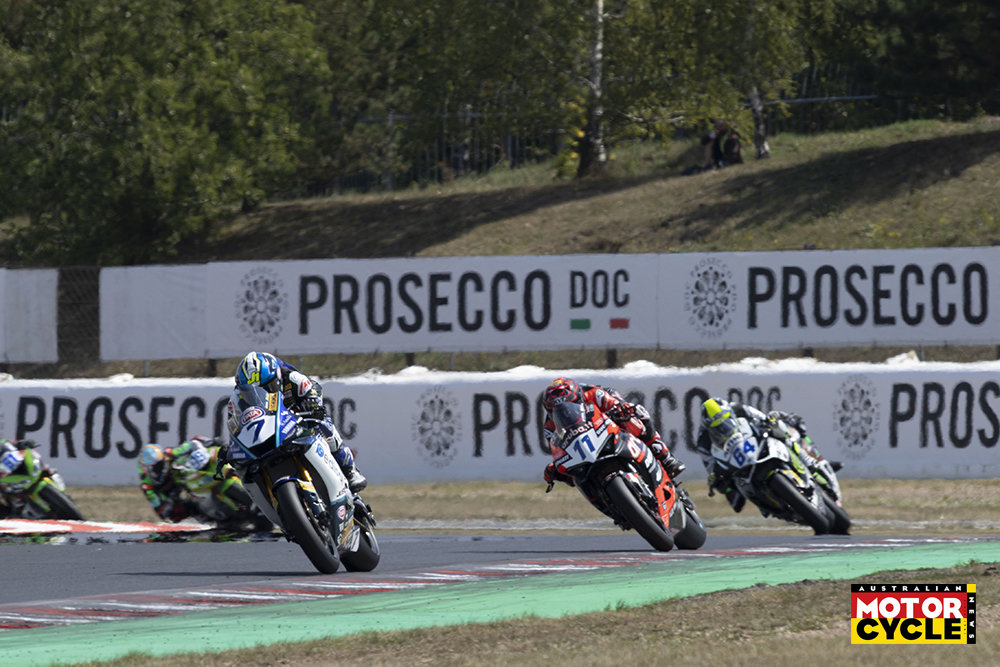 In the infamous multi-rider pile up into T1 of Race One on Saturday Aegerter was deemed to have fallen to the earth again after standing up to get the race stopped and restarted with him back in it. He was at first said to have concussion, but after he proved that he did not, all his actions in the gravel on Saturday did was draw a sporting sanction, to the tune of not being able to start Race Two.

Eventually Baldassarri was able to make the most of the opportunity with another win, to draw himself up to within 14 points of Aegerter in the championship.

In third place Stefano Manzi (Dynavolt Triumph Street Triple RS) was again on the podium, as he had been on Saturday, to bring the three cylinder project up to a new level of performance and status. 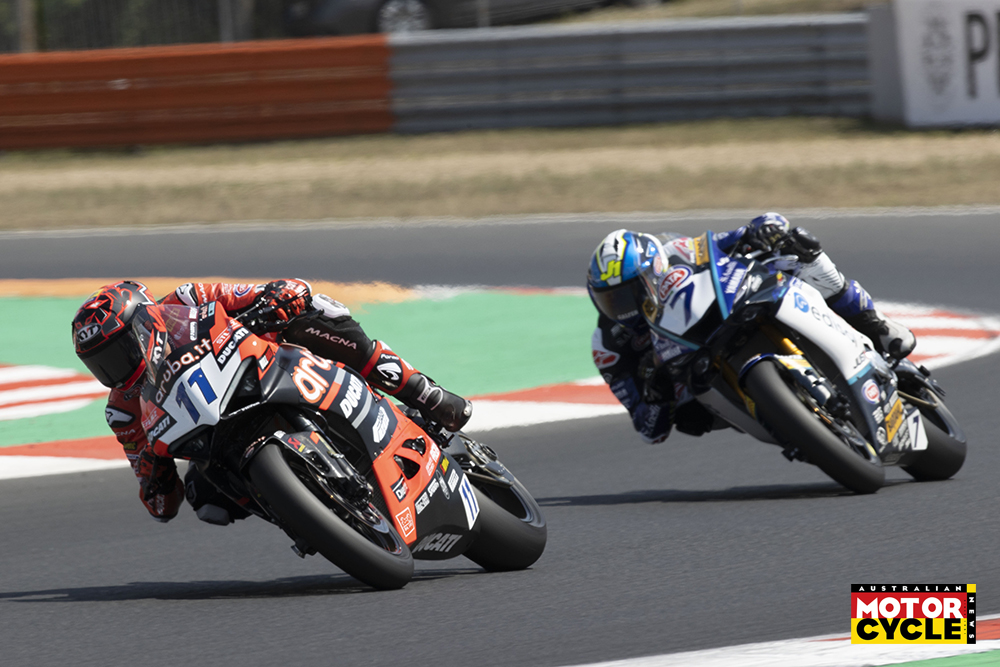 Can Öncü (Kawasaki Puccetti Racing) made up for no points in Race One with fourth in Race Two, again being passed at just the wrong time after holding a podium position for a while.

The lack of Aegerter points of any kind in Most sees the championship standings read Aegerter 245, Baldassarri 231, Bulega 147, Öncü 112 and Manzi 108.

Long summer break next, before Magny Cours hosts Round Seven in early September.