It’s the latest in a long line of retro remakes, but Suzuki’s new Katana stirs more than just nostalgia

This is not 1981 and Suzuki’s newest Katana will neither be the styling trailblazer or the sales success the legendary GSX1100 was almost 40 years ago. But nor does Suzuki expect it to be. Ever since the Japanese firm unveiled the 2020 Katana in November last year, diehard fans of the iconic model have been criticising the modern interpretation’s lack of authenticity. But, just like Kawasaki’s reimagined Z900 duo, or Honda’s new Monkey, the 2020 Katana is merely intended to tug on the heartstrings of motorcycling’s most nostalgic. And at doing that, I reckon it’s nigh-on spot on.

It’s based around the firm’s GSX-S1000 nakedbike and, I will admit, increasing the capacity out to something the other side of 1050cc in a bid to use the same 1100cc moniker as the original machine would have made this a far more credible remake. But this is 2019, the pool of development funds are becoming shallower and, frankly, the retuned version of the K5-K8 generation of GSX-R1000 engine used in this application is a peach. Switch on the key and the green-on-black LCD dash has all the hallmarks of an Atari gaming console – which was as modern as it got in the early 1980s – as it goes through its start-up procedure. Thumb the starter, select first gear and as release the clutch and feed the 999cc inline-four cylinder engine revs, making your way slowly and deliberately through the six-speed gearbox, your helmet is filled with a gloriously guttural induction howl from deep underneath the nostalgic bodywork.

Capable of 110kW (150hp) at 10,00rpm, the long-stroke engine is sprightly throughout the rev range, offering grunty torque right through the midrange to the upper end, where it peaks at 108Nm at 9500rpm. As an everyday roadbike, which is exactly what this Katana is, the engine is substantially powerful, thoroughly usable and delightfully audible – even if it doesn’t tick that 1100cc box. And the best bit is it’s all actuated by some good old fashioned throttle cables. Cables which instead of forming a perfect circle around the outside of the throttle tube like they do on the GXS-S1000, they instead have been repositioned on a flatter cam at the opening in a bid to reduce snatchiness as you open the throttle. Remember there’s no switchable engine or power maps to handle this electronically, but there’s something remarkably refreshing about a mechanical fix.

That’s not to say the Katana is void of any electronic rider aids. It’s relatively basic compared to some of its European counterparts but, frankly, so is its price – but more on that later.

So as well as a three-level traction control system that can be switched off all together, it boasts a non-switchable ABS system as well as the firm’s Low RPM-Assist which electronically raises the revs ever so slightly once first gear is engaged to reduce the chance of stalling. Great on a learner-approved something, though probably superfluous on a 150-horsepower nakedbike, but if the technology is there, why not. And there’s LED lighting all round. In the very low single-digit ambient temperatures we were met with high in the Japanese hills, and on roads littered with paint and damp patches, the light which indicates the traction control system is intervening was flickering to the point of becoming distracting during the first few runs up and down the Arashiyama-Takao Parkway while in its highest level-three setting. The 10km stretch of road, by the way, is so enjoyable that motorcycles are actually banned from the road on weekends, such is its popularity among the two-wheeled fraternity.

Anyway, while I couldn’t feel the system kicking in (the Katana’s traction control system retards the ignition timing based on gear, wheel speed, crank and throttle position sensors – there’s no IMU to speak of), I reluctantly switched it to level two, which didn’t outwardly appear to change anything at all, except calm down the frequency of the flickering light – that’s a capable and non-intrusive system by my count.

It shares the engine and chassis with the firm’s GSX-S1000 nakedbike, though the subframe was designed specifically for the Katana and its rather, well, bare bum. For the first time on any production-model Suzuki, the rear fender, indicators and numberplate are all mounted on what Suzuki calls a satellite hanger which is mounted directly to the left-hand side of the swingarm. It was met with mixed emotions by the world’s assembled press, but I’m a fan of it. It adds to interest to what would otherwise be a bland and common numberplate hanger from a band and common parts bin. 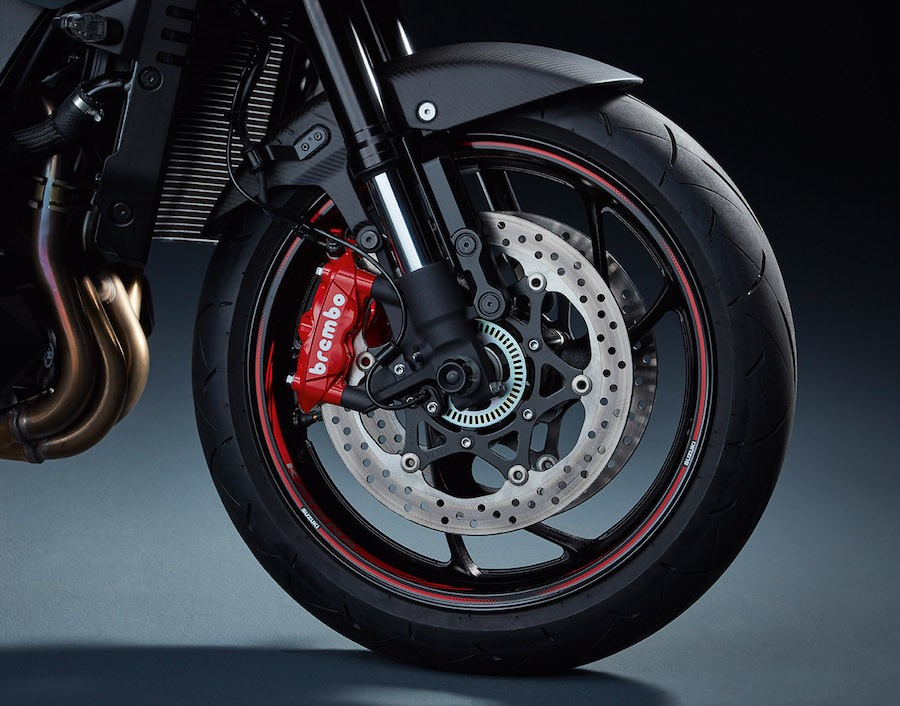 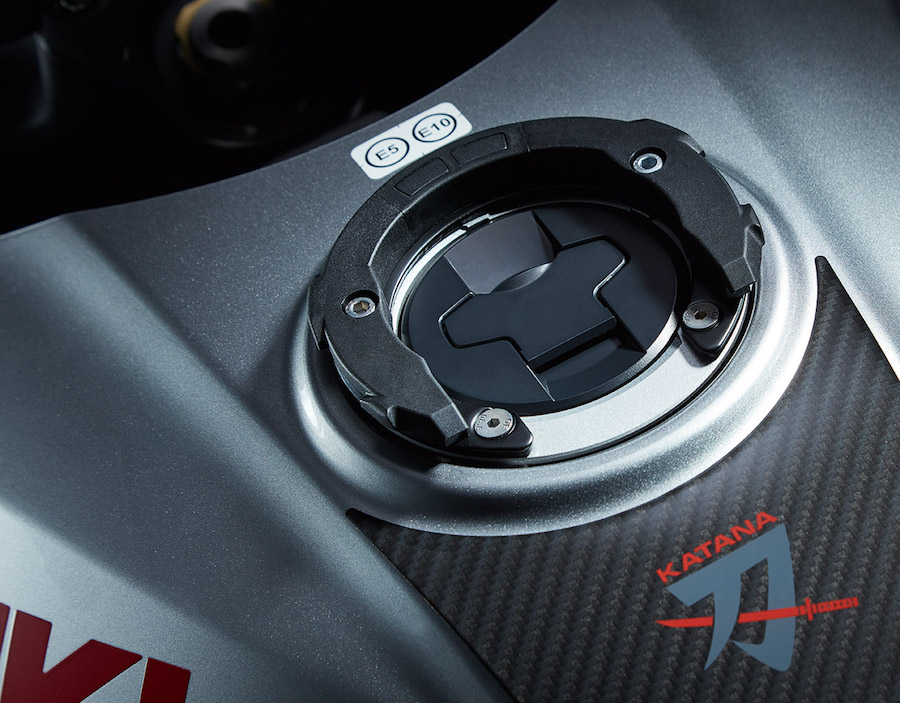 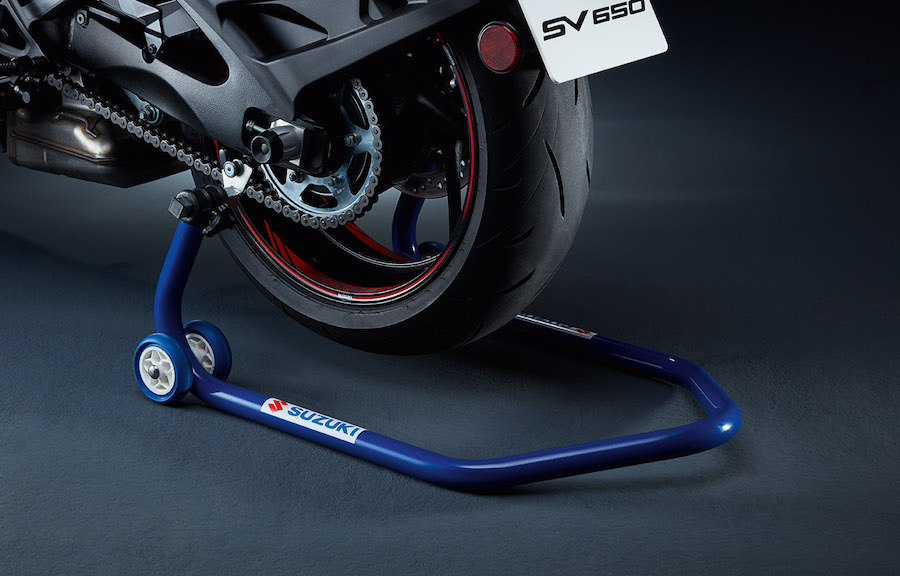 As well as the subframe, Suzuki said both the 43mm fully adjustable KYB front fork and matching shock has been uprated for its application on the Katana, despite appearing the same as the GSX-S’s on paper. And while I couldn’t get an answer from the engineers about where exactly the improvements were made, the feedback from the front contact patch on the cold road surface through to my gloved fingers was exceptional. Despite the cold temperatures and the unfamiliar roads, the front end gave me confidence to push, even it the sketchy conditions.

A lot of that confidence was to do with the new Dunlop Sportmax Roadsport 2 tyre which is making its OEM debut on the new Katana. In the technical presentation, Dunlop’s manager of tyre design Toshi Yukimatsunami described the new tyre as the middle ground between a Hypersport and Touring tyre. It’s the new silica ratio, he said, which is responsible for the hoop’s ability to perform at both lower and warmer temperatures than previously possible, and while I can’t vouch for how they work in the warmth, they were excellent in the cold.

When the pace warmed up, I found I needed to drag the rear brake in a bid to settle the rear end into corners, it’s something I tend to do anyway, so I wasn’t inclined to rectify it through the fully adjustable monoshock. None of the blokes I asked had the same experience, so I suspect it had a lot to do with our somewhat different payloads. 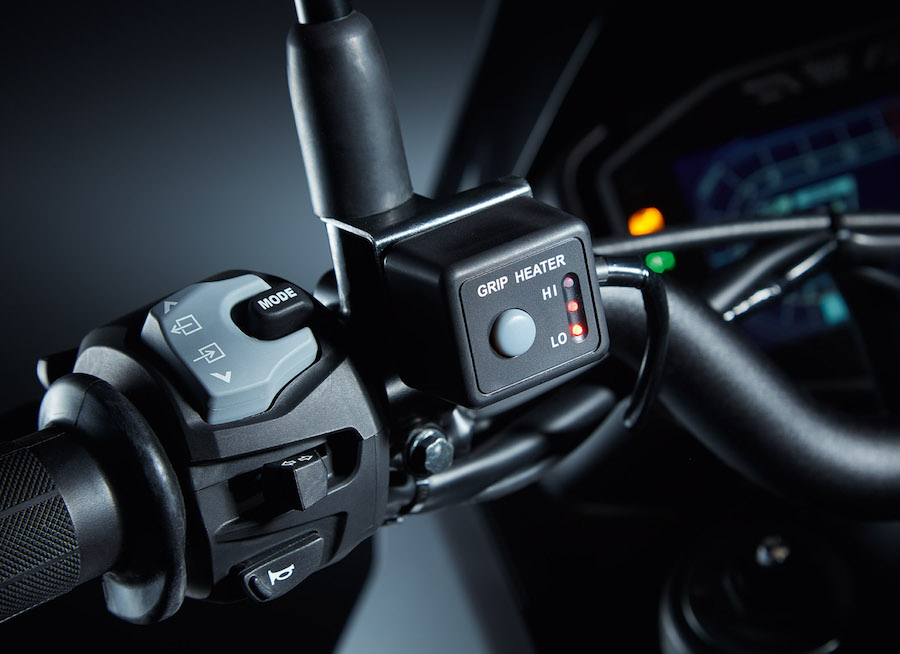 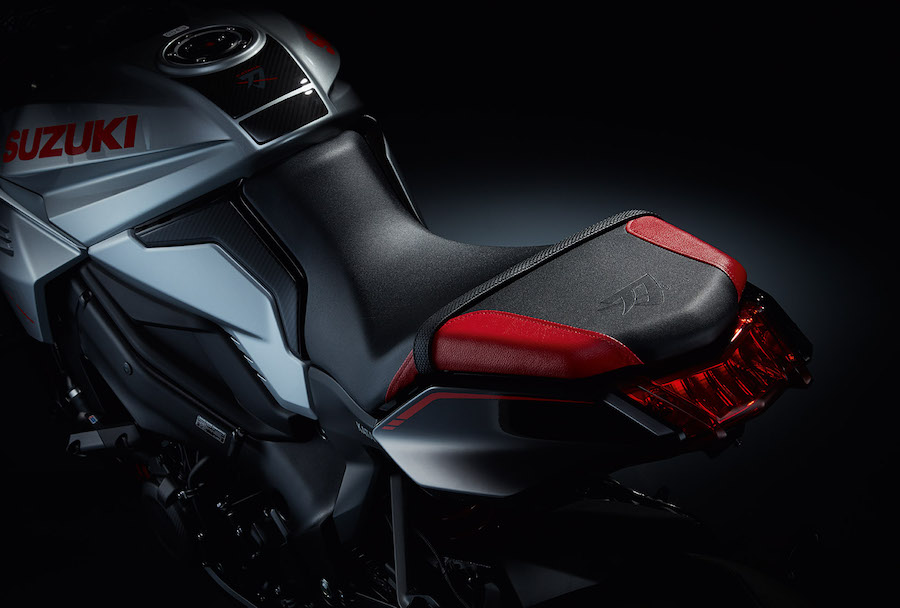 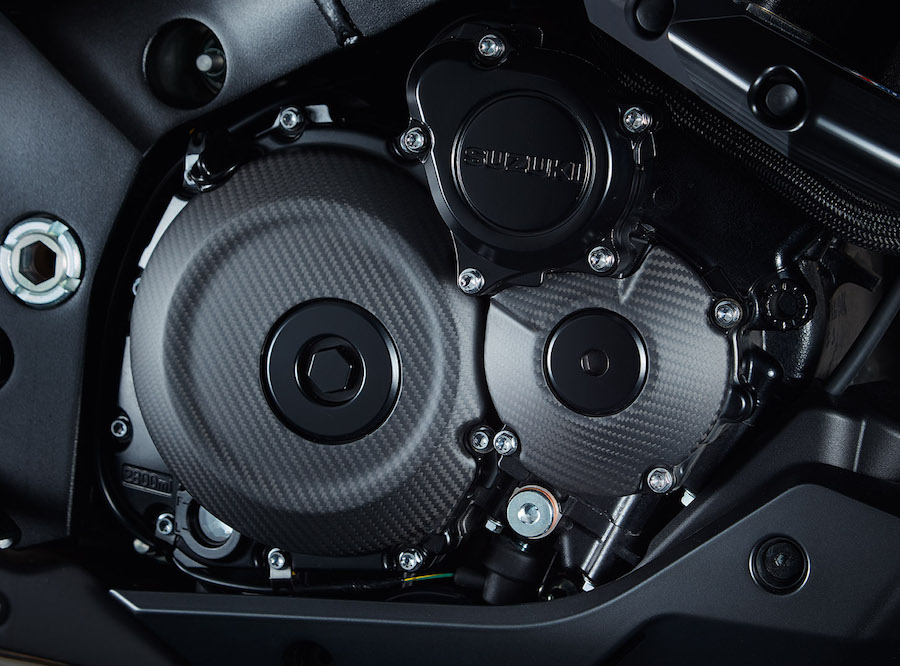 Speaking of weight, fully fuelled, the Katana weighs 215kg and when you’re standing alongside it, its presence looks every one of those kilos. But hop on the bike, settle yourself in the hugely intuitive and ergonomically comfortable riding position and it goes from looking like a front-heavy retro machine to feeling like a well-balanced and agile nakedbike.

Flicking the thing from side to side felt both instinctive and fun, yanking on the wide tapered alloy ’bar as you get on the gas on the exit of a tight left turn, both intake and exhaust howling in harmony before you’re back on the anchors, dropping it right, trailing throttle and rear brake through the corner, feeling exactly what the front tyre is doing before you’re back on the gas lining up the next corner to do again and again and again.

It’s an easy but engaging ride, not least because the thing sounds louder than a 2020 bike ought to. The brakes contribute to the feedback offered by the Katana, a pair of radial-mounted Brembo calipers looks after the stopping duties up front (and you can get them in red! See accessories sidebar), and there’s plenty of feel and power from the single-piston/245mm disc rear end. The front lever is adjustable, which mightn’t sound much, but when your hands are child-size, like mine are, you’re grateful for the additional feature, especially at this price point.

Bearing in mind the new Katana will be a limited run production and that you can currently ride away on Suzuki’s base-model GSX-S1000 for $16,690, the Katana’s ride away price of $18,990 is probably about right. It gives the Katana the premium edge the brand no doubt wants to create around the new bike, but would-be buyers will be asking themselves whether some nostalgic bodywork and the legacy of one of motorcycling’s most iconic monikers is worth an extra two grand.

But given Suzuki aren’t expecting to sell this things by the bucketload – in fact Suzuki Australia is only expecting to move about 140 examples – and given the styling and updates turn a rather dull-looking bike, however capable it might be, into a modern interpretation of an 80s icon, then I absolutely think it’s worth it.