The Street Triple and I go way back, with the 2013 version having particularly taken my fancy. The models before that steered a bit weird, but that 2013 Street Triple R – which featured AMCN’s former deputy editor Paul Young as a big part of the development team – was everything I wanted in a mid-size nakedbike.

Costing around $13,000 when released, it was a bargain, steered intuitively, had that sweet-sounding, rip-snorting engine and, importantly, the kind of feel that only a well-developed bike can give you. This feel equals confidence, and I felt bullet-proof on that thing. Quality throttle response, solid front end, neutral steering, predictable power – it was a giant-killer.

That bike appeared on an AMCN cover with me and Lukey Luke, became part of the AMCN long-term fleet, starred as my bike of choice in the AMCN How To Do a Wheelie video that went a bit nuts, and then, after all that abuse, found its way into the shed of a former AMCN publisher who loved riding it to work as well as taking it around twisty backroads. Turns out it was as well built as it was well priced, and perfectly specced.

So in my mind the new range of Street Triples has a lot to live up to, and just bumping capacity from 675 to 765cc wasn’t going to be enough on its own. The line-up of three bikes (four including the LAMS version) are aimed at different hip pockets, with spec ranges to match. I was looking for these bikes to somehow maintain that incredible feel – something manufacturers seem to be losing hold of in this world of electronic bloody everything. More features are always welcome, but it was the sheer rideability of the original Street Triple R that made it so good.

To let us run the rule over the new model, Triumph Australia shipped three of the range north to warmer climes and let us loose on an entertaining Queensland road loop, before allowing us onto the hallowed turf that is Lakeside Raceway – a perfect testing ground for a mid-sized bike.

Mind you, what is mid-sized these days? With bikes like Kawasaki’s excellent Z900 thought of as mid-sized, does that make Triumph’s new 765cc engine a tiddler? No, the bump to 765cc hasn’t made the Street Triple now feel like a 900, but the versatility of the engine remains.

The base-spec Street Triple S is easy to gaze past as your eyes are drawn to the sexier R and RS models, which are much higher spec and therefore higher priced. However, my first session at Lakeside was on the S version, and all the predictability I was looking for was there. Lacking the trick dash, offering the least power and just two modes (Road/Rain), and only $800-odd more than the 2013 Street Triple R, the 765S is nevertheless a quality machine. Even with less track-friendly rubber (Pirelli Rosso Corsas versus the Pirelli Diablo Supercorsas fitted to the R and standard on the RS), that trademark Street Triple

feel was there at the front end and the throttle, letting me come to terms with the Lakeside layout much more quickly than I expected to.

What a magnificent track. It’s tight, bumpy, wall-lined and has lots of undulation, reminding me of the tracks I cut my teeth on, such as Amaroo Park and Oran Park, so I really felt at home.

Threading my way through the bumpy right-hander after the kink meant precision was needed, and the red rocket gave me the confidence to attack it from only lap three. I had to, mind you, to force my way past another journo mounted on the faster R version – the power difference wasn’t as noticeable on the public road, but it was at Lakeside.

With the switchable traction control off, I had all the feel I needed to keep the wheels in line; when turned on, the lower-spec TC was interrupting throttle inputs on the bumpy surface. Once in clear air, the only thing stopping me going faster was the lack of ground clearance – again, not a problem on the public road. Even the lower-spec brakes performed well, putting up with a pounding.

The S may be the bottom of the range, but if you want a quality ride from a well-priced nakedbike and can’t afford the next one up, don’t feel bad. You will still have a real rider’s bike, one that encourages you to seek the edge of its ability while promising to not swipe you over the back of the head if you go too far.

Next it was on to the R model. So what does another $2050 get you ($15,850 versus $13,800 plus on-roads) in riding terms? The 765R has more power for a start: 87 versus 83kW and 77 versus 73Nm (claimed). The power difference on the road isn’t as noticeable, aside from the slightly reduced need to downshift thanks to more torque, but the top-end boost is noticeable at valve-bounce stage as you scoot through Lakeside’s excellent kink. Just try not to look at the walls either side…

This bike is a much more modern place to be than the S, which does feel dated once you see the flash TFT screen of the R, cycle through the rider modes and take in the new switch gear, play with the Showa Separate Function Fork and eyeball the more cutting-edge design.

On the road, the R is the model that feels best, the Showa SFF performing better than the Big Piston version on the RS in standard settings over our rubbish roads, but also sitting higher in the stroke and feeling more solid. The RS is too soft as standard, but more on that later.

Another big difference between the S and R is that the R seems to rely more heavily on its ride-by-wire throttle, and the feel has suffered as a result. That ride-by-wire works in line with the added sportier modes of the Street Triple R and RS, slowing and speeding up throttle response as it cycles between engine maps. In this case, I didn’t like how the throttle ramped up through the pull, giving more than I asked for, and removing the quality feel the S and older Street Triples have. It’s just not as predictable as I’d like.

This wasn’t the case at all throttle openings, however, and during normal use it felt like most ride-by-wire systems, just slightly remote. But in really technical riding situations, such as wheelies and feeding in high-rpm power on the track, the throttle/rear wheel connection isn’t there, which is a shame. Otherwise, the engine is a ripsnorter, with just the right amount of power for the road and tracks like Lakeside – with more power it wouldn’t have been more enjoyable, just daunting. This way, the bike gives you the chance to approach its engine limits, which is high-end fun.

Even with the throttle not feeling quite as I personally like it, the rest of the platform makes for an attack-mode roadbike and excellent trackbike, the trademark triple howl egging you on between rock walls and racetrack Armco – in this area, the bike’s feel is spot on.

Many journos on the launch mentioned how good the bike makes them feel when riding it, and I agree. The R lets you push hard, but also allows you to take a slower approach.

It’s comfortable, well-priced and has the range of features you expect from a mid-size naked. Unless you want the full-house model…

The RS offers another three claimed kW, but the same torque. There’s an Öhlins shock, Big Piston Showa fork, an extra rider mode (Track), a powershifter and some styling add-ons. More power and a gold shock, plus the Showa BPF and tougher brakes – it’s obvious you want the top model, right? For me, no. 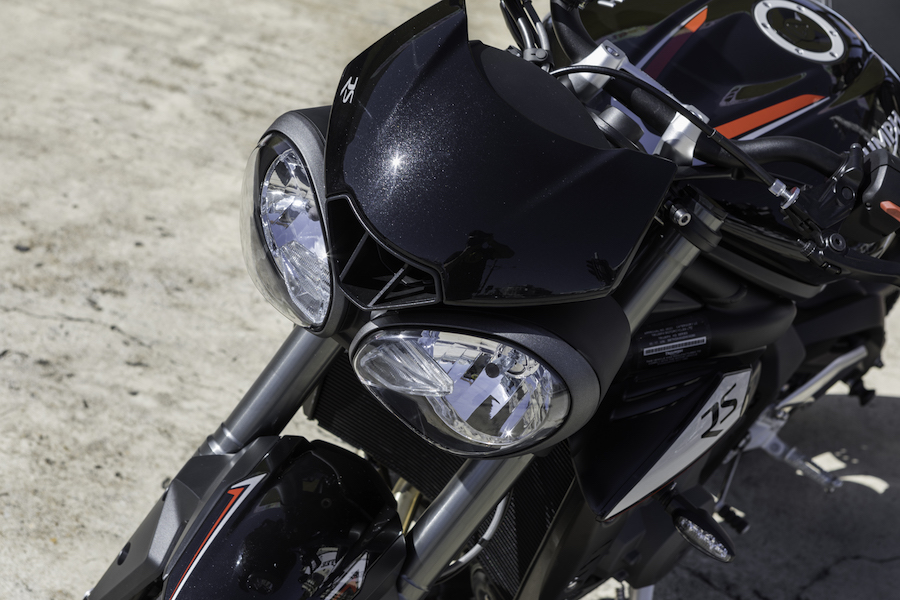 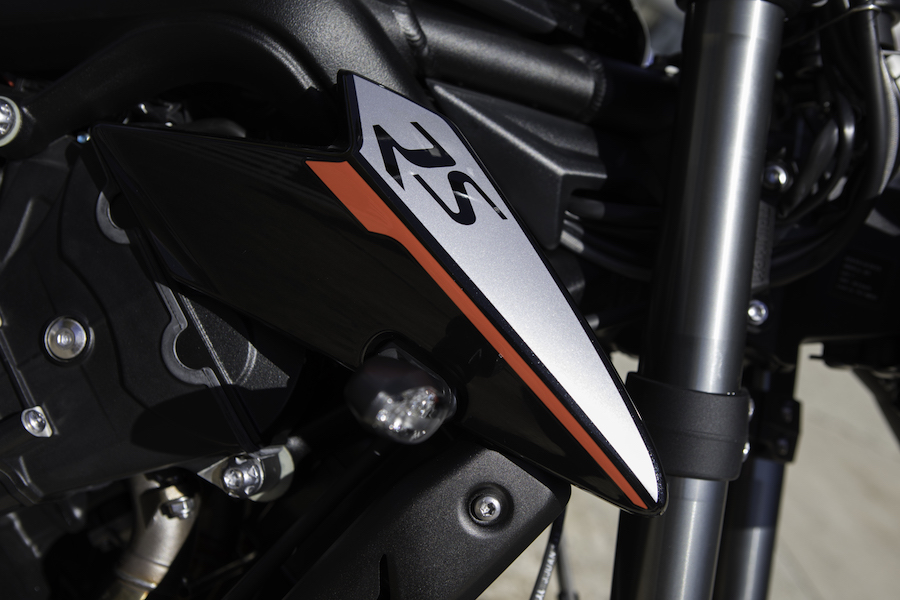 The value is definitely there – the extra hardware for a measly $1700 premium over the R model is priced right. But in my mind the ‘lesser’ R model is the pick of the three … if I could add the powershifter to it.

The RS is too soft and I just felt more comfortable on the R, on road and track. Heavier springs may change that, but as they stand, and with only damping settings changed and in standard form, the R offers more confidence.

The RS price tag is starting to compare to heftier opposition, too. $17,550 is Ducati Hypermotard territory, and well above bargain basement models such as the Kawasaki Z900 ($12,499 + ORC) and Yamaha XSR900 ($12,999 + ORC), which offer great value for money and more capacity for your naked buck.

For me, the mid-priced R model still does everything a Street Triple should do well, with light, nimble handling on all surfaces, wicked stopping power (even if it gives up braking system spec to the RS), and the most important real-world features of the RS. I’d be adding the excellent quickshifter though. It’s a solid piece of equipment you use every few seconds on the racetrack and on a lively ride.

Those who are drawn to the top-spec versions of anything won’t be disappointed with the RS, though. Heavier fork and rear springs to suit my 85kg and perhaps the feel at the handlebars would have improved, and swayed me to look higher up the spec sheet. 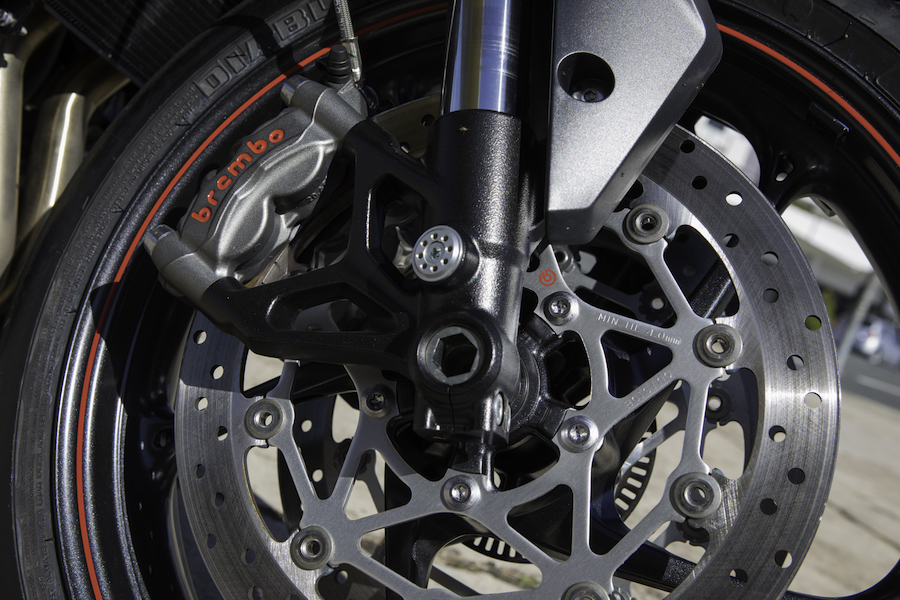 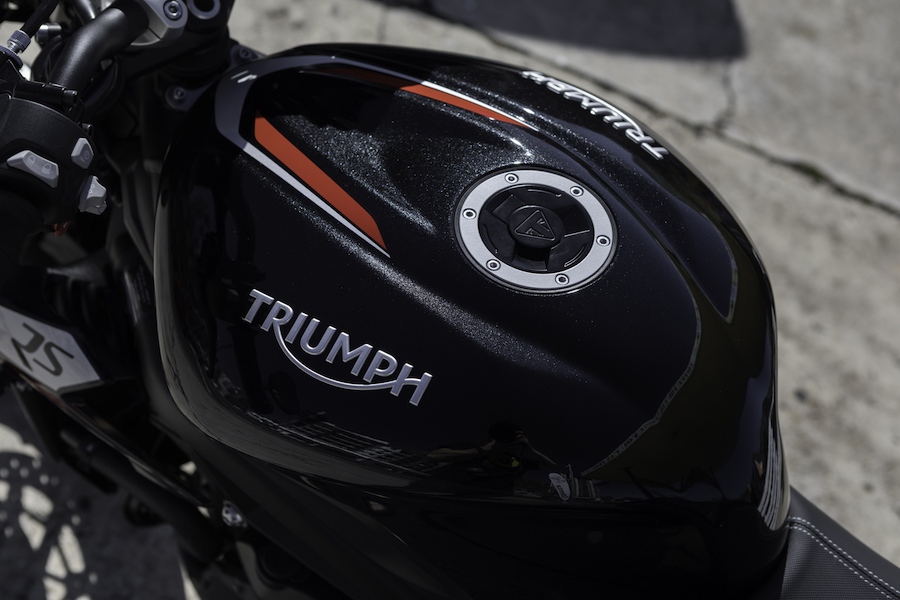 The real surprise was the S model – it has noticeably less power, but you have access to most of it thanks to a talkative chassis and predictable brakes and handling. It may have had the least power in the track sessions, but it wasn’t the slowest bike going around, depending who was on it. You could ride its wheels off.

Across all three, the Street Triple tone remained – they’re lightweight, predictably powered and fun bikes, with a lively feel to them. And while they remain refined, throttle response aside, they offer giant-killer potential on the kinds of roads most of us ride most often.

The chassis are balanced, the engine and brakes play nicely together and the bike remains a Street Triple in essence. There’s no longer a big gap performance-wise to the Speed Triple – comparing the two back to back would be a comparo for the ages!

And don’t feel compelled to leap straight for the top-spec bike. The S and R both hold their own, even in the face of the tempting lushness of the RS spec sheet. For me, an R with the quickshifter would do the trick. 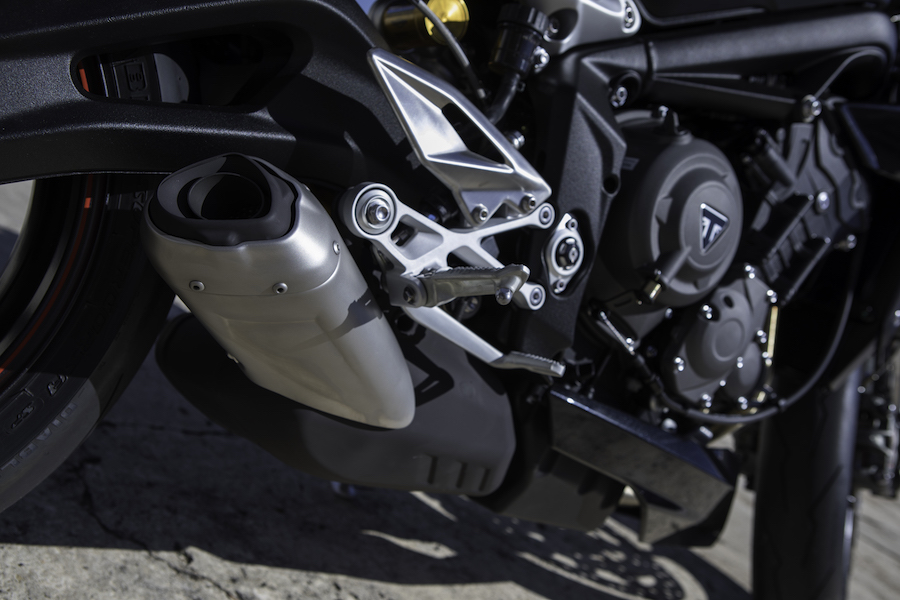 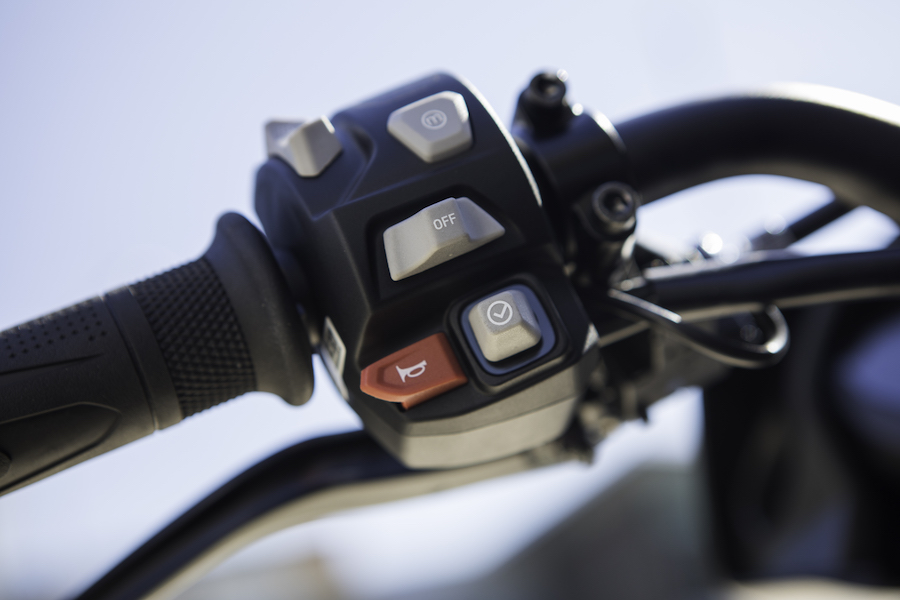 ⊲
New TFT dashes on the R and RS.

⊲
Powershifter and auto-blipper on the RS – throw away your clutch lever! Um, except when you want to take off and stop and wheelie, so yeah, just leave it alone.

⊲
Lightweight! A claimed 166kg makes for one lithe street weapon. This is what we should all be asking for from our bikes – less weight. We don’t need more power.

⊲
The engine note – I can’t wait to hear a gridful of these engines smashing around Moto2 in 2019.

⊲
Ride position is neutral, good at the track, great over road kilometres. Spot on.

⊲
Ground clearance on the track – unless you’re really keen on leaving sparks.

⊲
Wheelies – it’s an ordinary wheelie bike, due to the throttle ramping ratio. It will do them, but it’s harder than it should be.

⊲
Colours – how about at least one lairy option, eh Triumph? This is a quirky bike (in a good way), let’s see some quirky on it. Bright green, anyone?

⊲
Those who go for the top-of-the-range model might want to see what else they could get for that price.