The 2020 WR250F adds versatility to its armoury, with high-tech adjustability making it two bikes in one

If you need more power in the bush than the 2020 Yamaha WR250F cranks out, I’ll eat my nylons. Importantly, how this power is metered out is also impressive and, thanks to smartphone technology, reasonably adjustable thanks to the ability to shift fuelling and ignition timing parameters with your phone.

It’s not this technology that makes the difference four hours into an epic trail ride, though. If the chassis is kicking 12 shades of excrement out of you over every tree root, rock or trail furniture piece, if the engine isn’t trying to climb trees with you hanging off the bars and the bike itself isn’t giving you the confidence to ride over something your mate just pushed his contraption over, then it’s just not as much fun. 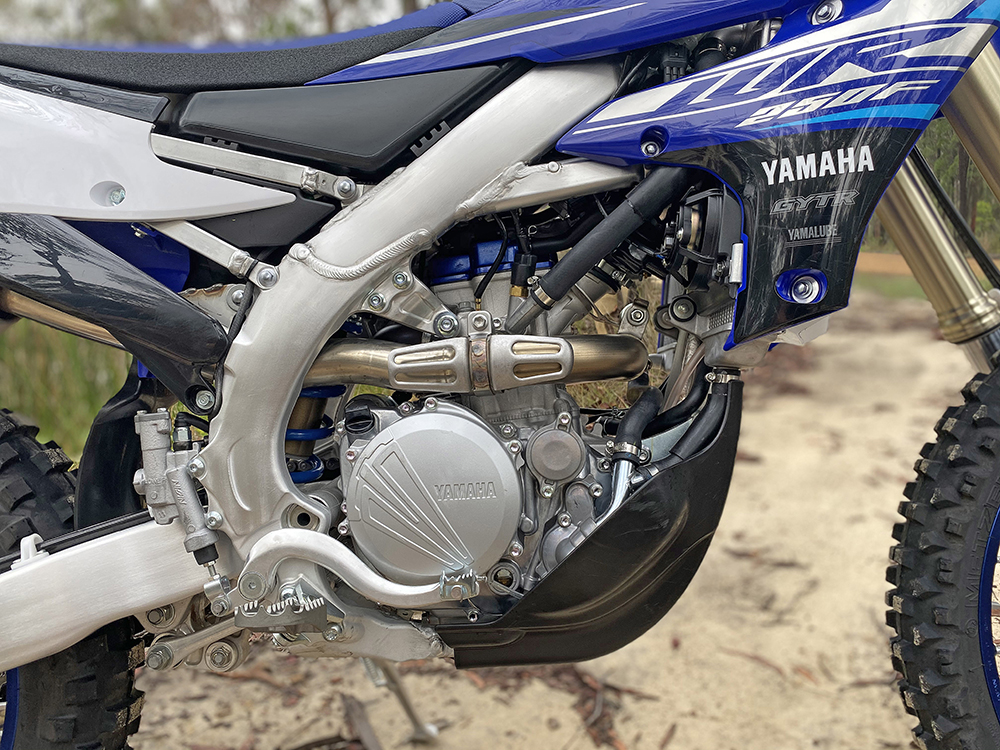 As mentioned in our test of the 2019 WR250F (AMCN Vol 69 No 15), the bike was an animal, but also aimed at the fitter variety of trailrider – it took a bit of holding onto, not surprising given its base platform. But I like a mellower ride in the bush, and I wanted to know if the 2020 model could maintain the rage when it came to speed between the trees, but also offer something that could be ridden all day by weekend warriors, who make up the majority of enduro-riding talent in this country.

The 2020 WR250F is based on the MY19 YZ250F motocross animal, which means the inclusion of smartphone tuning, a higher-compression piston, new intake and exhaust valves, new intake camshaft, new ‘two step’ CNC machining process for cylinder-head porting, aluminium engine mount brackets instead of steel, as well as a flatter, slimmer and lower seat. 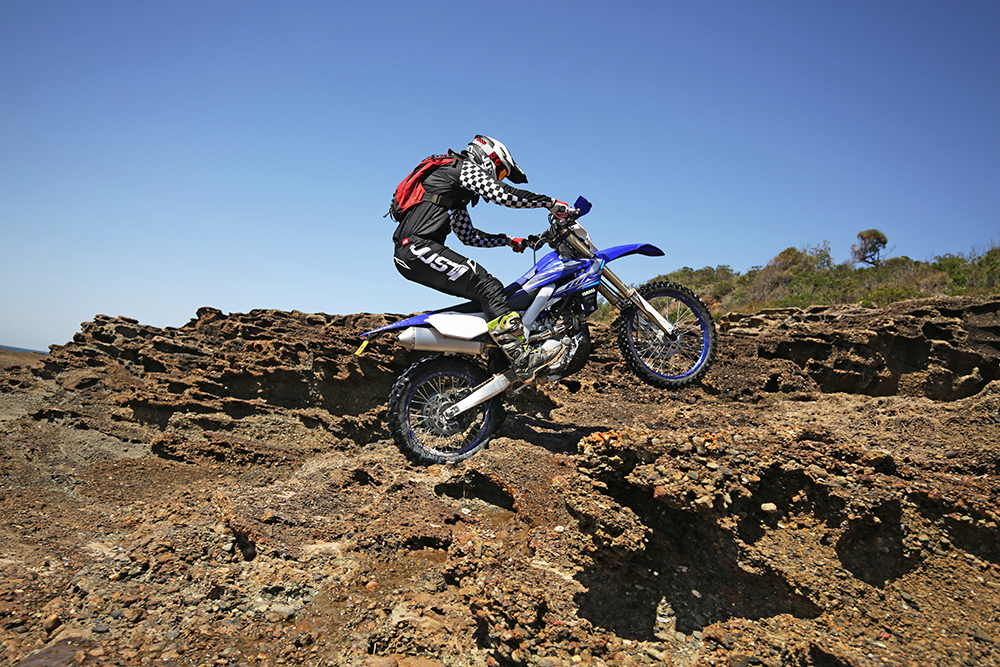 The 2020 WR250F enjoys those changes, but with enduro engine mapping, an enduro-spec clutch for slipping the whole way up hills, a new headlight cowling sitting lower and closer to the rider, less rigid engine mounts and enduro-tuned suspension settings.

The enduro-spec engine mapping and suspension tune are the key points here, as a mellow, confidence-inspiring bush ride needs the bike to stay planted over choppy stuff, and offer a throttle response that allows smooth modulation, rather than neck-snapping acceleration. 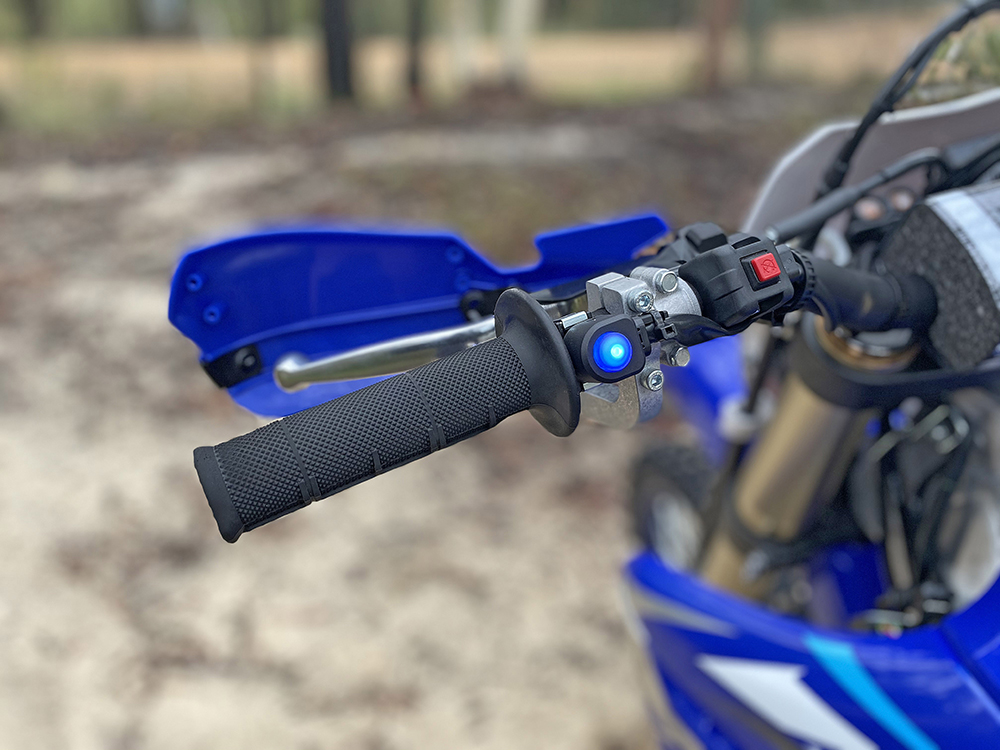 I rode the 2020 version on the exact same trails I rode the 2019, though the terrain was different thanks to a heap of rain. Softer ground masks snappy throttle response and spiky suspension action, however the 2020 bike maintains serious speed ability on single track, combined with more feel for the average rider, and an engine that gives you plenty of top end for fast fire trails, but lets you pick your way through tricky single track in second gear.

I was surrounded by two-stroke riders on my gallop on the WR, which have an inherent advantage when it comes to snaking through tight singletrack, thanks to less engine braking and lighter weight, but the WR250F is so nimble for a four-stroke – and a big reason to steer away from the larger-capacity four-bangers – that the advantage was negligible. 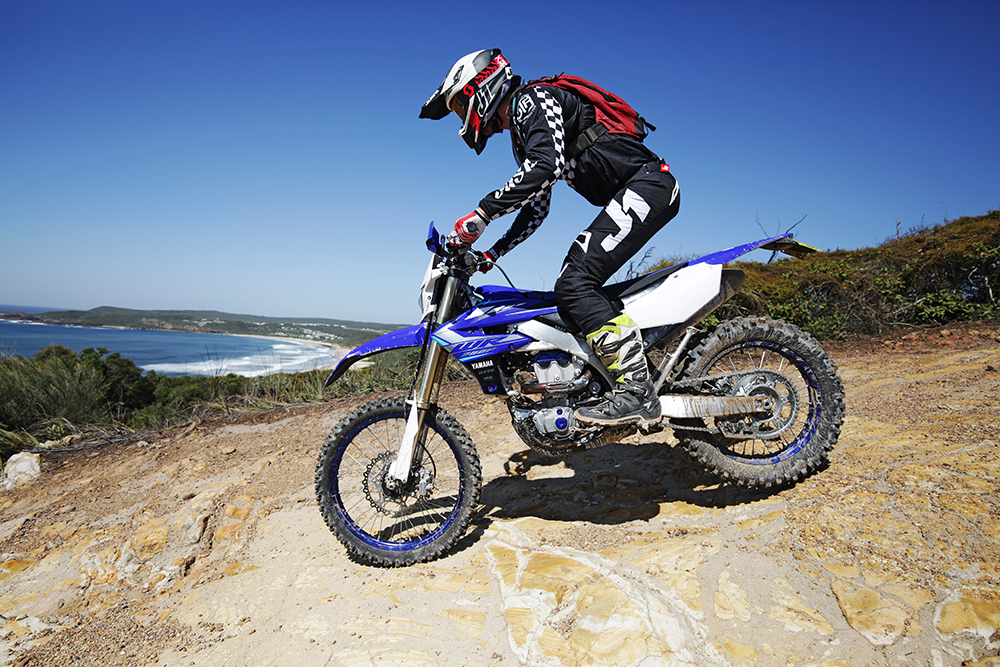 The precise steering is a real highlight of this bike, and when combined with a KYB front end that feels more compliant and planted than the model before, is a real joy to punt hard through wet trees.

The large, blue map switch on the bars is easy to use and isn’t gimmicky. Railing a relatively wide 4WD trail, a quick nudge of the button gave me the snappy power I wanted to wag the tail on corner exits and punch me off the erosion mounds and over the inevitable pools of water on their blind side.

Not long afterwards, we dived into a tight, steamy single-trail section, complete with angled, wet tree roots and the odd surprise log half way around a corner, and a push of the button gave me the mellower map I had pre-set with the phone app before it was even off the trailer. The bike is still snappy, and not as mellow as a 2010-spec 250F from back in the day, but it is lighter and steers better – I enjoyed it more than the 2019 version, because it’s more refined and more able to be adjusted to how I like it. 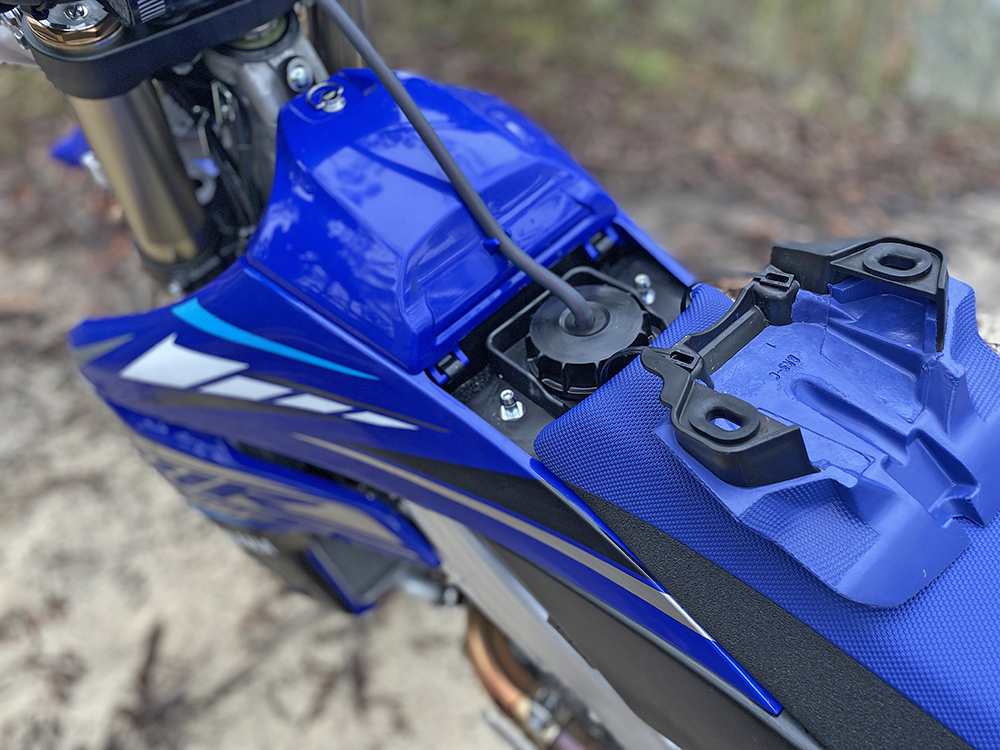 Where the 250F now really shines is its versatility. It has the outright power to lap up a grasstrack MX track on the limiter, but also the breadth of engine torque to allow you to grunt it around the tight stuff, without erupting into unwanted wheelspin. The bike’s nimbleness also making it playful enough to be fun.

The fun lasts, too, with the 7.9L fuel tank offering 90-100km of hard-riding range – hard core trail rides may need a fuel option for much more than that. The bike is still not the surest starter around – it’s hit and miss as to whether it will fire the first button push, its competition does a better job of that. But hey, I’m from a generation that had to kickstart its dirtbikes, and it’s still a lot better than that option. 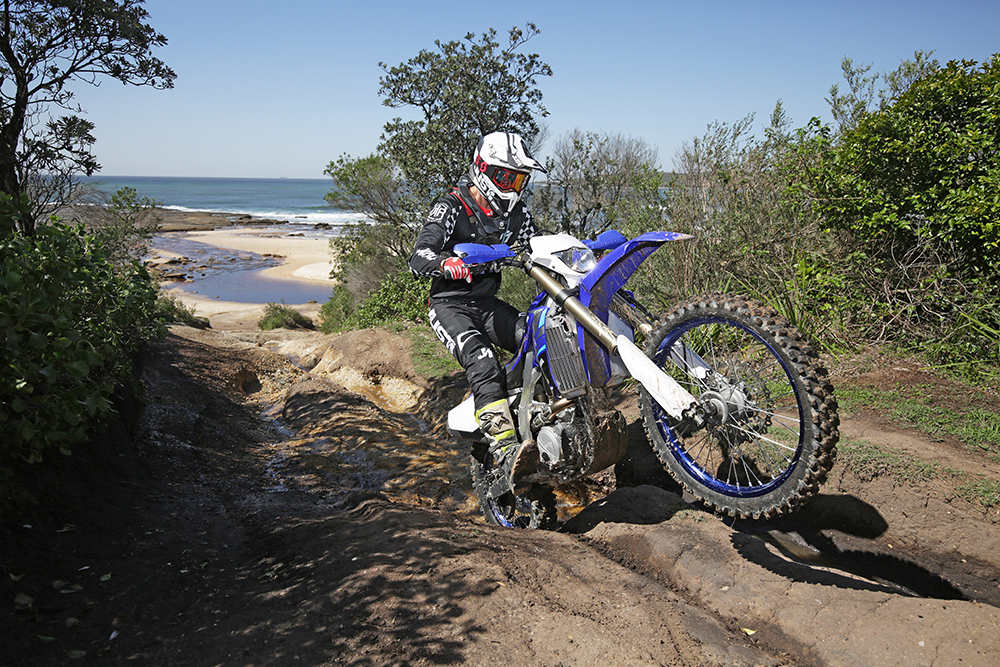 The 2020 WR250F shouldn’t be viewed as a ‘little’ quarter-litre bike any more. The engine is pretty amazing, so when paired with the adjustability it now offers via your phone, I think of it more like a trendy 350, delivering useable power in a variety of situations, but without being boring. It is still a harder-edged 250F than the KTM for instance, with its unapologetically MX-derived platform only marginally softer-hitting than the jumps and bumps version, but it allows a level of comfort margin to bush speed and I rode it all day no problems.

I’d prefer a fatter foot on the sidestand to allow it to park up in soft conditions, less abrasive standard grips, and to start better. I love the adjustability, the engine’s broad abilities and the chassis’ steering prowess. 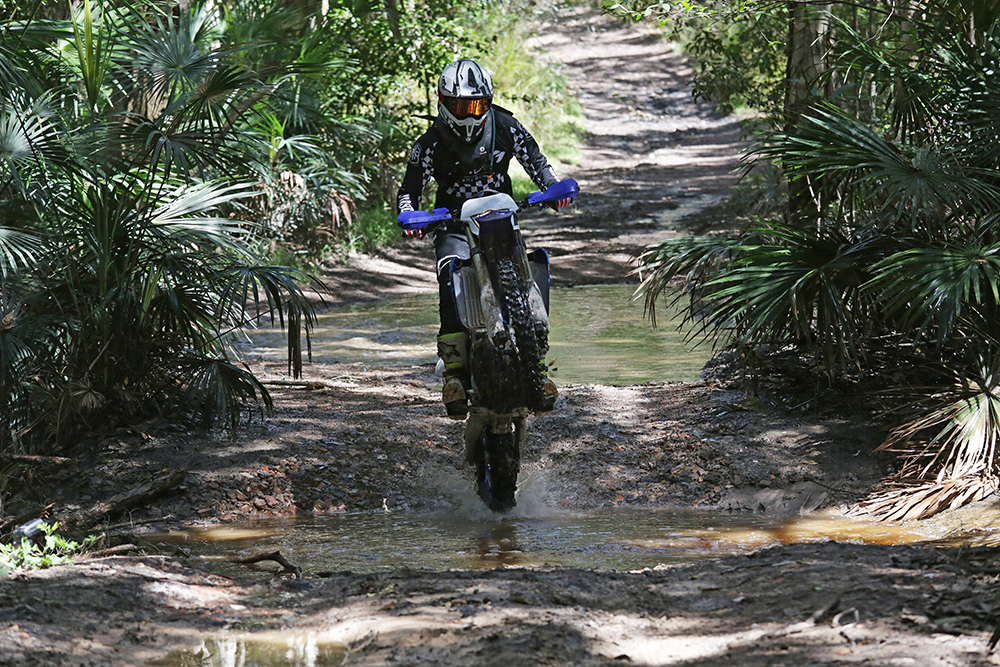 With a bike featuring this level of sophistication, the price is always going to be controversial. The $12,545 ($13,999 ride away) asking price for something you will drag under trees and rub on the ground on a regular basis seems steep, but with its cutting-edge engine, tech levels and quality chassis, that’s simply the price of admission. Other 250Fs are in the same ballpark; Sherco’s 250 SEF-R is $12,490 (plus on-road costs) and KTM’s 250 EXC-F is $13,395 (plus on-road costs), neither with the smart phone tuning.

The 2020 WR250F gives me the versatility I want from an enduro bike, despite its capacity once being thought of as a tiddler, and the adjustability gives me the mellower nature I wanted, compared to the 2019 model. It does feel more refined, too, and from long wheelies, to tight single-track frenzies, the WR250F makes mincemeat of it all. 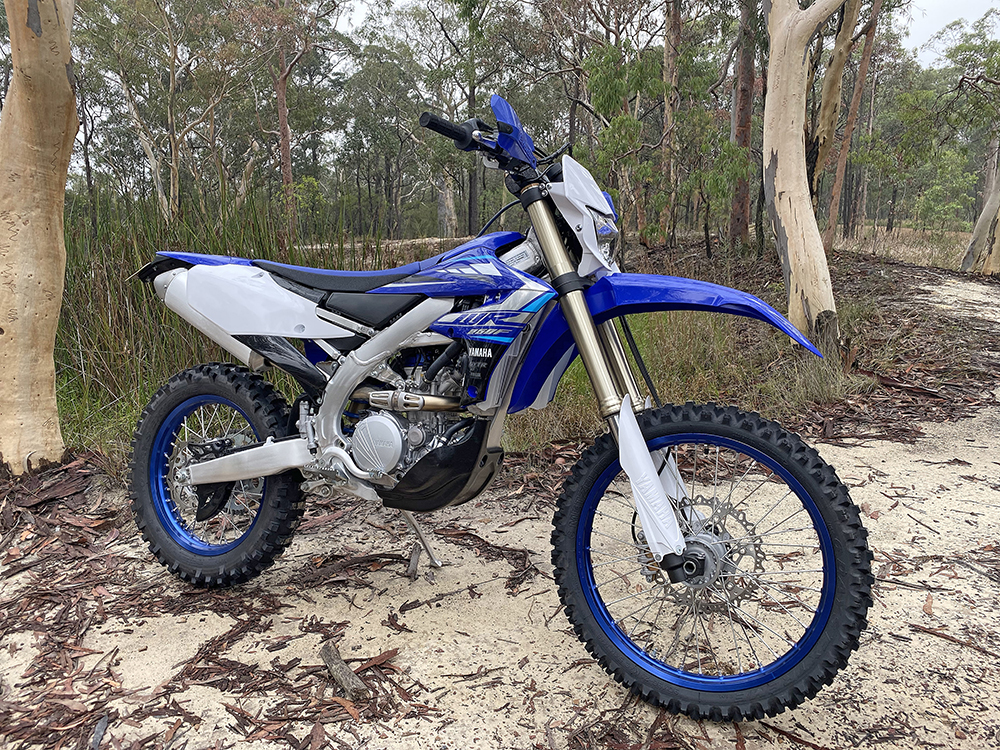