State of the art electronics, a higher-revving V4, a new swingarm and a new aerodynamics package – this is the most sophisticated Aprilia Tuono V4 Factory ever

The Aprilia Tuono V4 Factory sounds amazing, even at idle. I know from experience that Aprilia’s V4 has always had a distinctive chorus but now, with more rpm to play with this has magnified the experience to overindulgent levels.

Leaving the famous pitlane at Misano, and the new Factory sounds magnificent, the V4 blasting pulsating vibrations off the pit wall. Does it get any better than this? Out on to the track on pre-heated Pirelli slicks the bike is straight into it, accelerating hard to join the swarm of Italian racers already up to race speed. 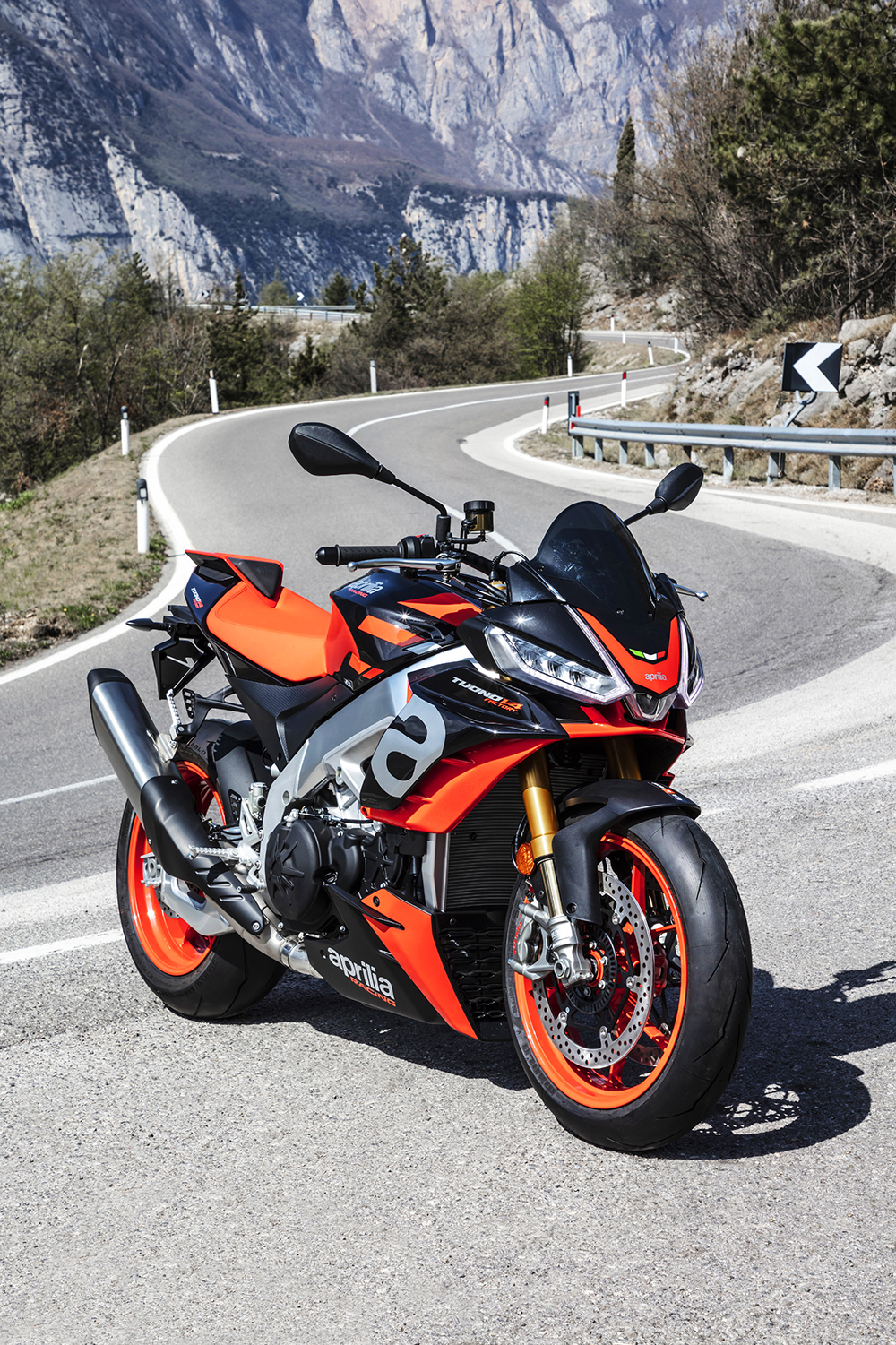 The noise is gorgeous, it has a voice which would put Pavarotti to shame! This is accompanied by the smoothest of quickshifters I’ve experienced on a roadbike. The changes are quick, perfectly matched in rpm.

The fuelling and throttle response, like the clutchless gear changes, are flawless. Aprilia has updated the electronics with a new Magneti Marelli ECU, which is essentially the brain that controls the fuelling and rider aids. This is four times faster than the previous ECU, which results in possibly one of the most, perfectly fuelled bikes I’ve ever ridden – even in the aggressive Race mode (one of six modes to choose from). I always praised the old bike’s fuelling and electronic rider aids, especially the quickshifter, which I didn’t think could be improved. But it has. 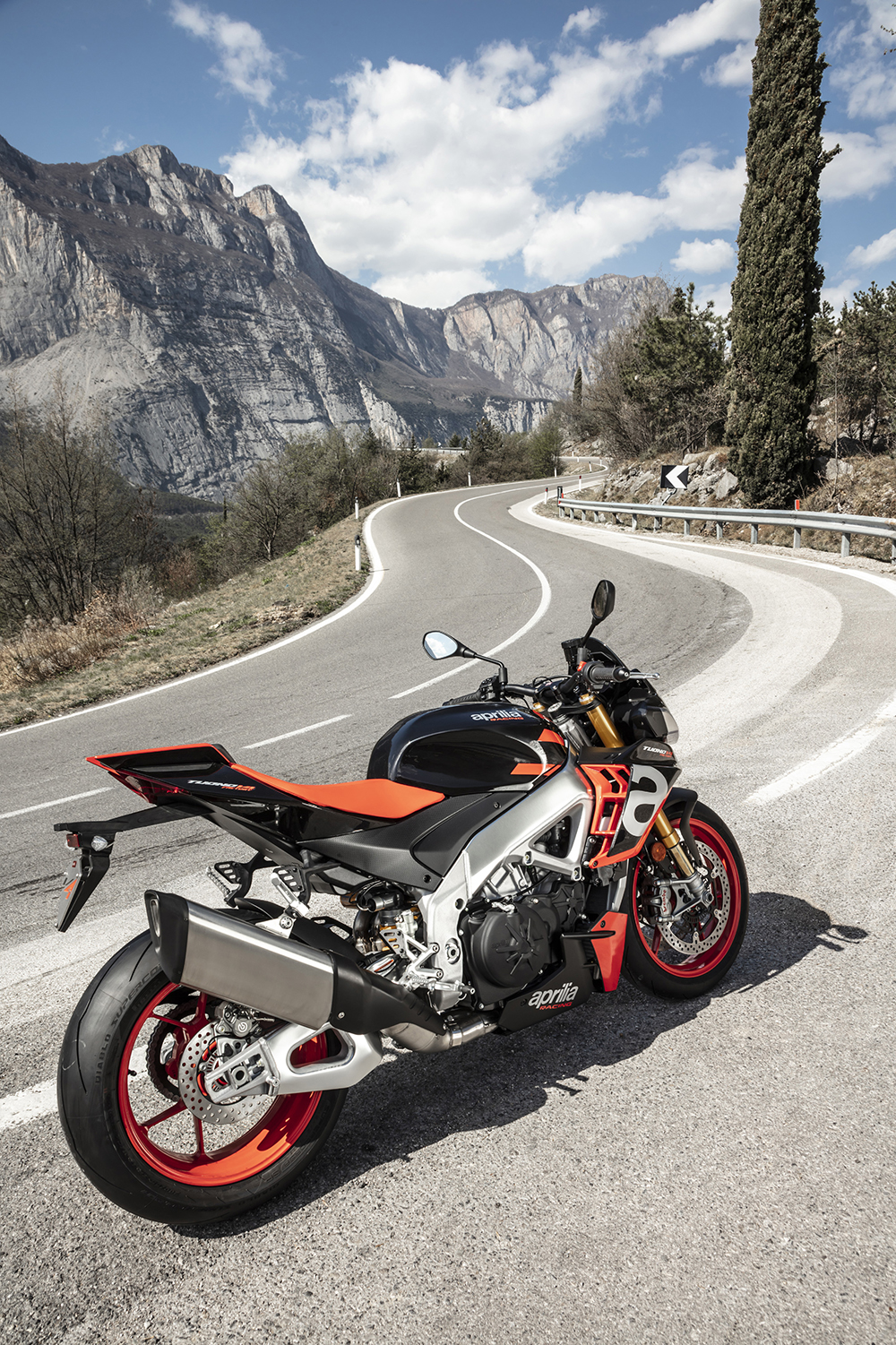 From leaving pitlane, the new Tuono felt like my bike and one I’d owned for years. The fuelling and shifts instantly boost rider faith in that all-important connection between rider, bike and road. I’m pushing hard from lap two on an unfamiliar racetrack.

The new Tuono may ‘only’ have 129kW (175hp) which, on paper is considerably less than the Italian competition from Ducati and MV Agusta, but every kilowatt is functioning. Nothing goes to waste, meaning you can use every last bit. Make no mistake; it’s fast, accelerates hard, but it’s not crushing, and the rider aids are outstanding. 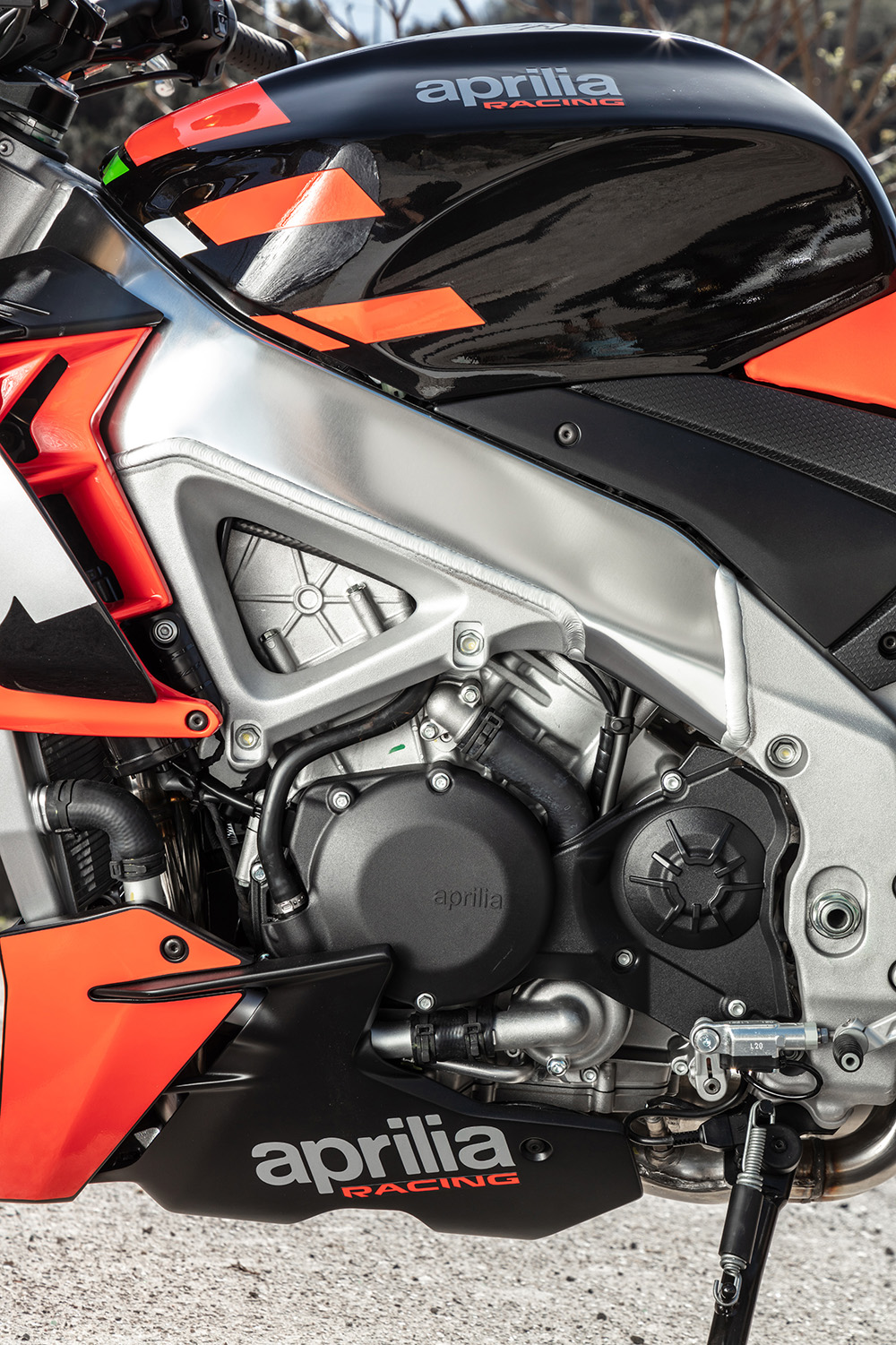 Aprilia’s anti-wheelie is as good as it gets, balancing the front wheel lift while still accelerating. I congratulate the fact that the traction control can be changed on the move, even at 100 per cent throttle. Unlike other nakedbikes in this hotly contested category, that small aerodynamic top fairing, now with built-in winglets, offers some wind protection. But does raise the question, is it a true naked?

The combination of the fuelling, rider aids, gearbox, power delivery and the aero-package make the Factory ultra-usable on track and, relative to the competition, easy to ride, too. Certainly less physical than the competition, like the Ducati Streetfighter V4. 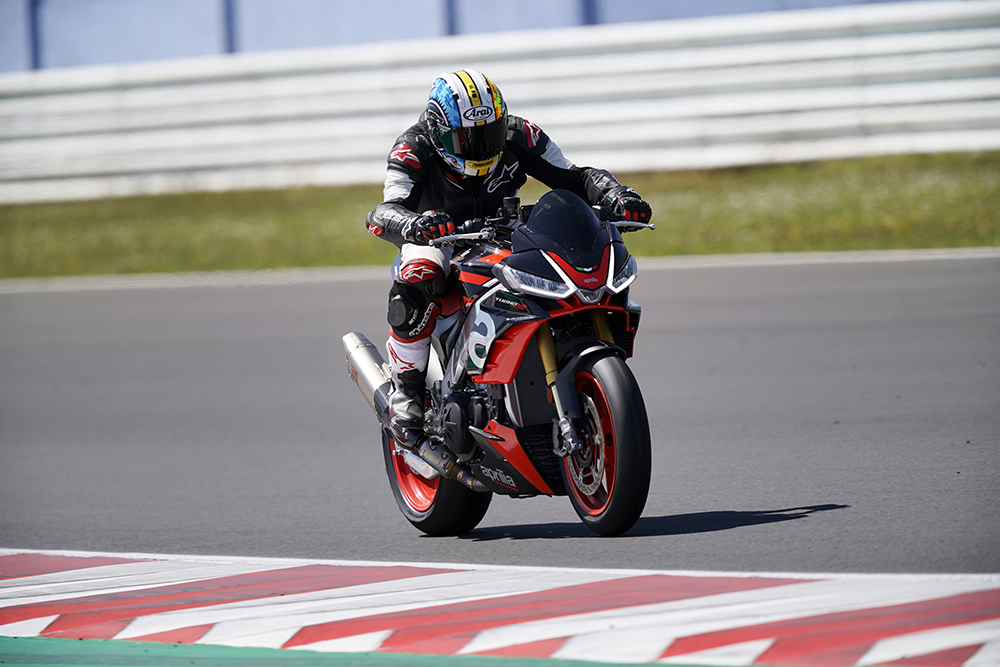 Aprilia arguably bent the rules for a roadbike launch by fitting Pirelli SC1 slick (Pirelli Diablo Supercorsa are the standard fitment) tyres and it dialled in the perfect setting for the very grippy Misano racetrack, but it illustrated what the Tuono is capable of – and it is mighty.

You can change the electronic Öhlins suspension, compensate for the rider’s weight and conditions, or even revert to the manual modes without semi-active assistance. But I stayed with the recommend A1 settings, which for my style and weight were impeccable. 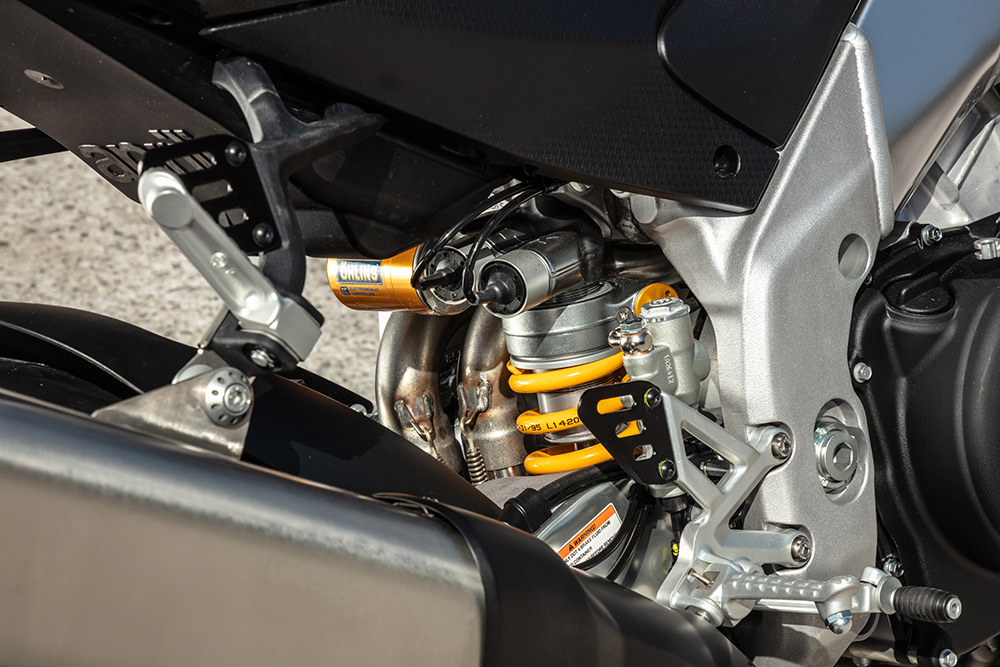 Nothing seems to unsettle or worry the new Tuono; it makes life easy. Brake late and you still hit the apex with perfect precision. Accelerate early and it continues to hold its line. Everything is controlled. You’re not panicking, it doesn’t feel like you are rushing or in a fight, you have more time to choose your lines and braking points.

The slicks combined with the track’s MotoGP-spec surface meant grip was never a concern. The newly formed fuel tank allows you to move around freely while still offering support. And ground clearance isn’t an issue, which is handy, because the Tuono likes to lay on its side like an obedient dog. 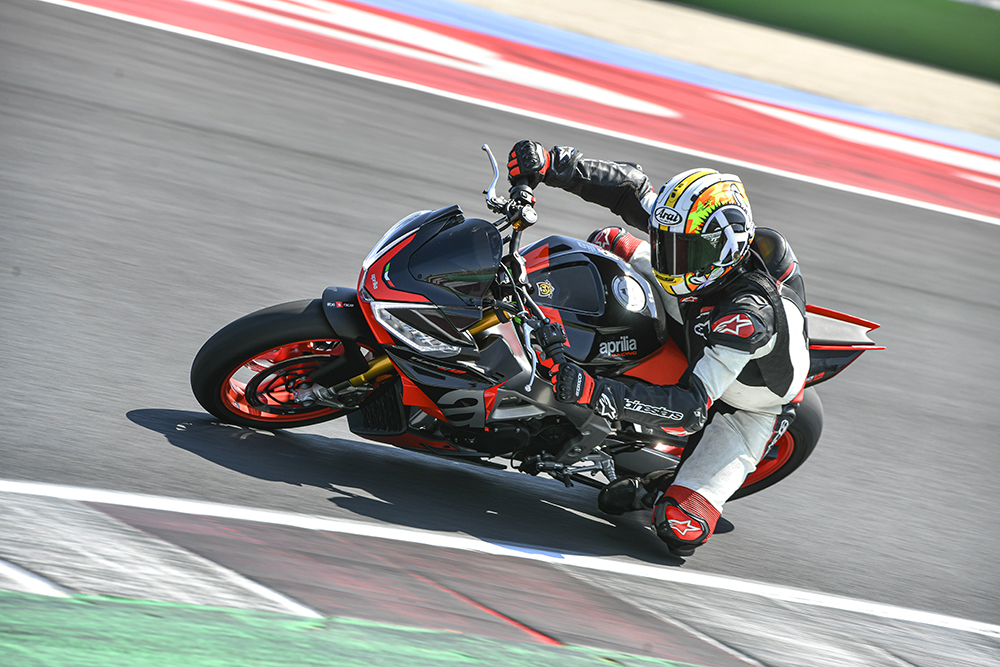 The new fairing – yes, a fairing on a naked bike – with built-in winglets is designed to enhance high-speed stability by boosting downforce. In the A1 setup (automatic suspension), I had very slight ’bar movement at the very top of fifth gear, but it was virtually nothing. On some models, electronic semi-active suspension can feel a little vague. But this wasn’t the case with the new Tuono. The translation from the suspension and tyres was spot on.

Brakes continue as the same M50 Brembo calipers found on the previous model. Three-level cornering ABS (co-designed with Bosch) allows ABS to be removed from the rear should you wish. The system works in partnership with the Rear Lift Mitigation (RLM), which prevents the rear wheel from rising during braking. 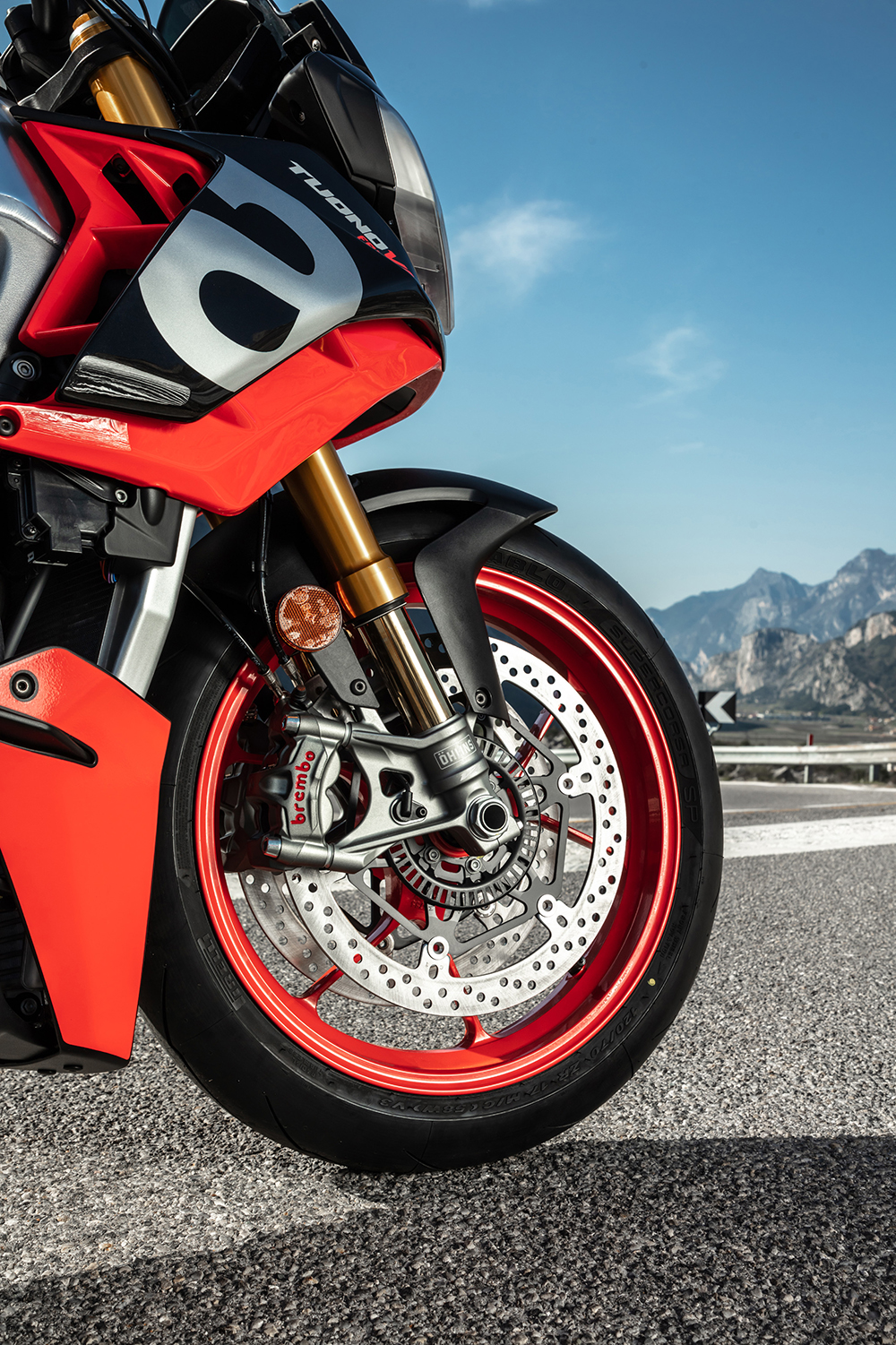 Aprilia Engine Brake (AEB), which adjusts the engine brake control, is brand new for 2021 and is now independent of the selected engine maps. You can now personalise and trim the engine braking ‘strategy’; AEB also takes lean angle and acceleration into consideration as you brake and roll into a turn, for example. Although the mechanical components of the brakes have remained unchanged, the algorithms and calculations activating the system are quicker – the ABS is more alert. 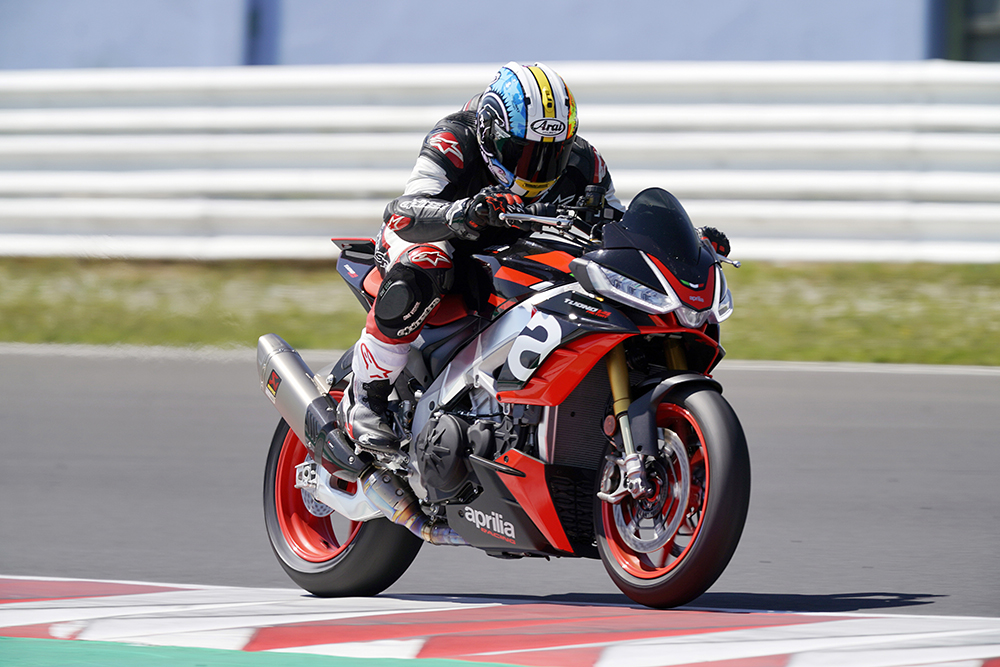 Away from the racetrack and living with the Tuono, the Aprilia has always scored highly against the competition. A lot of this is because it’s not fully naked and the small top fairing deflects some of the windblast. It’s the most bearable at speed. The reshaped tank’s capacity is 18.5L and Aprilia quotes consumption at 7.2L/100km. This was a track-only test, so I didn’t get a measured consumption figure, but if Aprilia is to be believed, on the road you should be looking for fuel around the 220-kay mark. 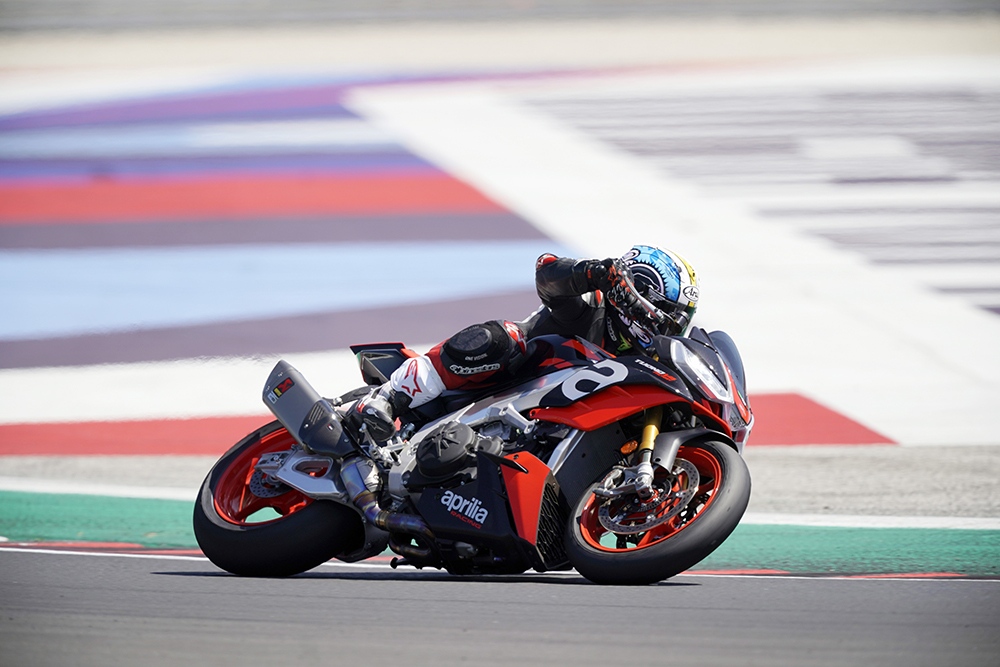 Practically speaking, cruise control comes as standard and the all-new five-inch colour TFT dash is informative and easy to navigate. The three road-orientated riding modes – Tour, Sport and User (a personalised mode) – change the power characteristics, rider aids and the support and actuation of the semi-active suspension. And should you want something more ‘sensible’, don’t forget the standard model (see sidebar), which has conventional suspension and more road-focused ergonomics for both rider and pillion, all still with the same performance and new technology.

In the accessories list, there are also practical products available, such as a comfort seat, side panniers, a larger top fairing, USB port and the MIA kit for Bluetooth connectivity. 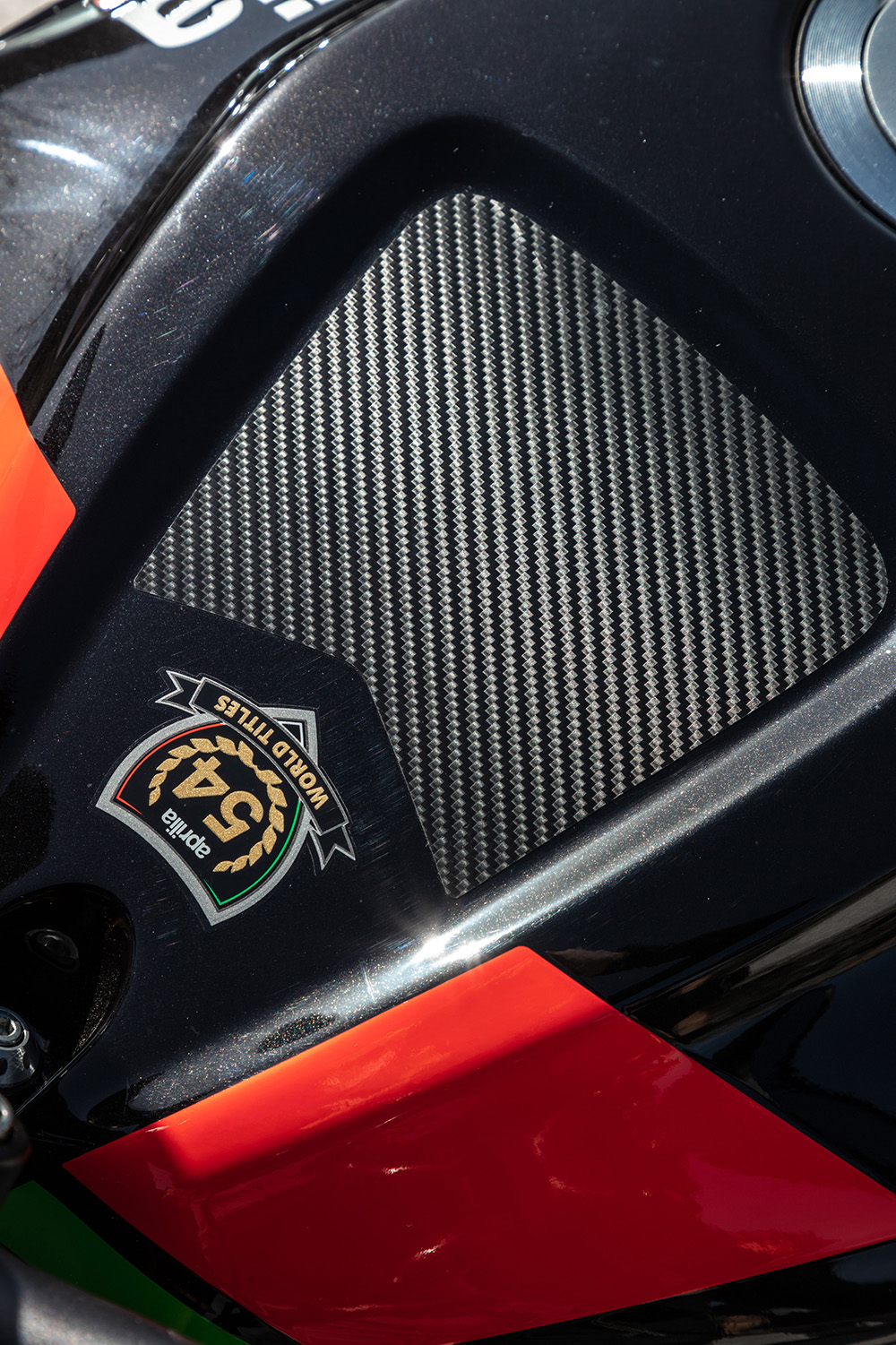 A new Marelli ECU allows for more innovative rider aids than ever and they all come as standard fitment on the Factory. The ECU is now able to operate four times faster than the previous model’s and is linked to the six-axis IMU which also takes information from various sensors around the bike, like brake pressure and wheel speed, to name just a couple. 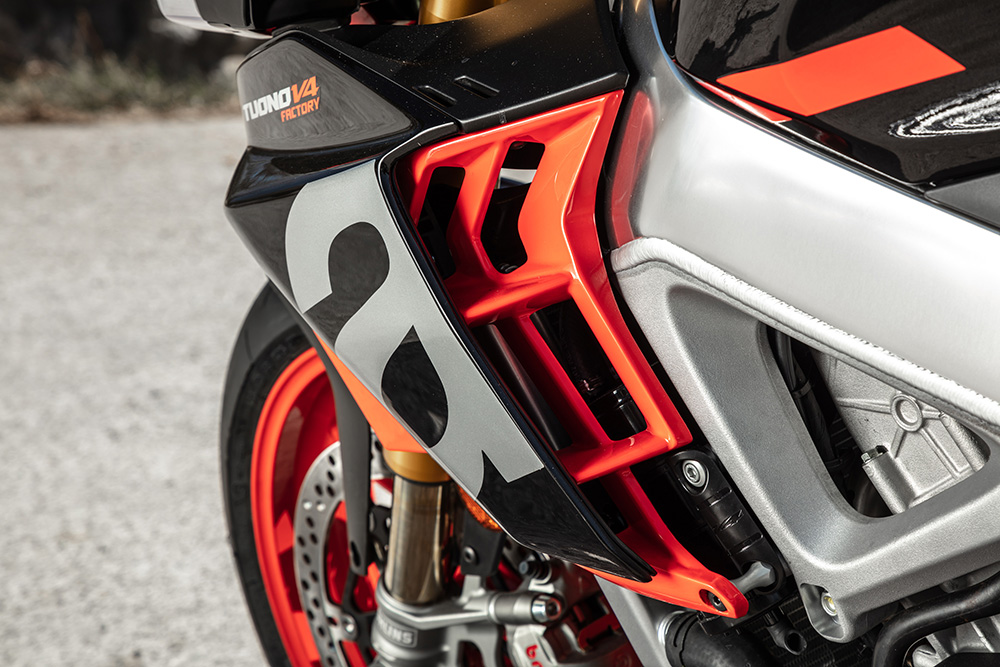 ATC (Aprilia Traction Control) has eight levels and can be changed on the fly – this is important and often overlooked. In one particular session I had to leave pitlane on a brand-new slick, so I increased the TC to six. Then, after one lap, while tucked in and accelerating down the main straight, I flicked it back to level three. On lap two I performed the same action and finally flicked down to one. I didn’t have to move offline, slow down, come into the pits, or look at the dash for more than a second. This is simple and easy to do, via the finger-and-thumb toggle on the left-hand handlebar. 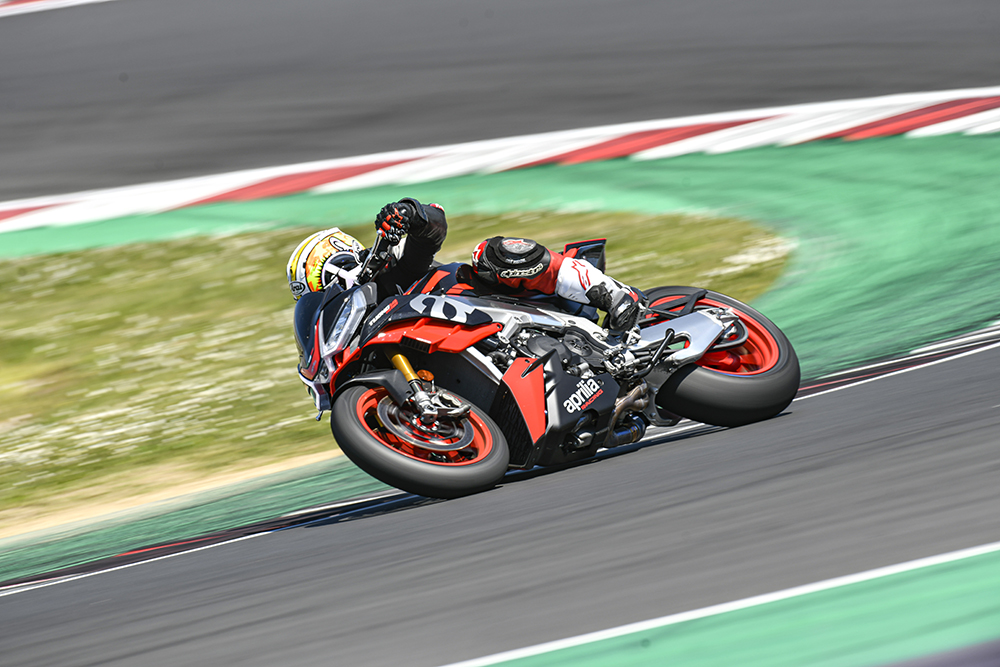 AWC (Aprilia Wheelie Control) has five levels and, like the traction control, can be changed while on the pipe, an added bonus that not only shaves lap times but makes the bike easier and more fun to ride. Again if you feel intimidated at a track which undulates violently, you can add more wheelie control while still lapping at a reasonable rate. 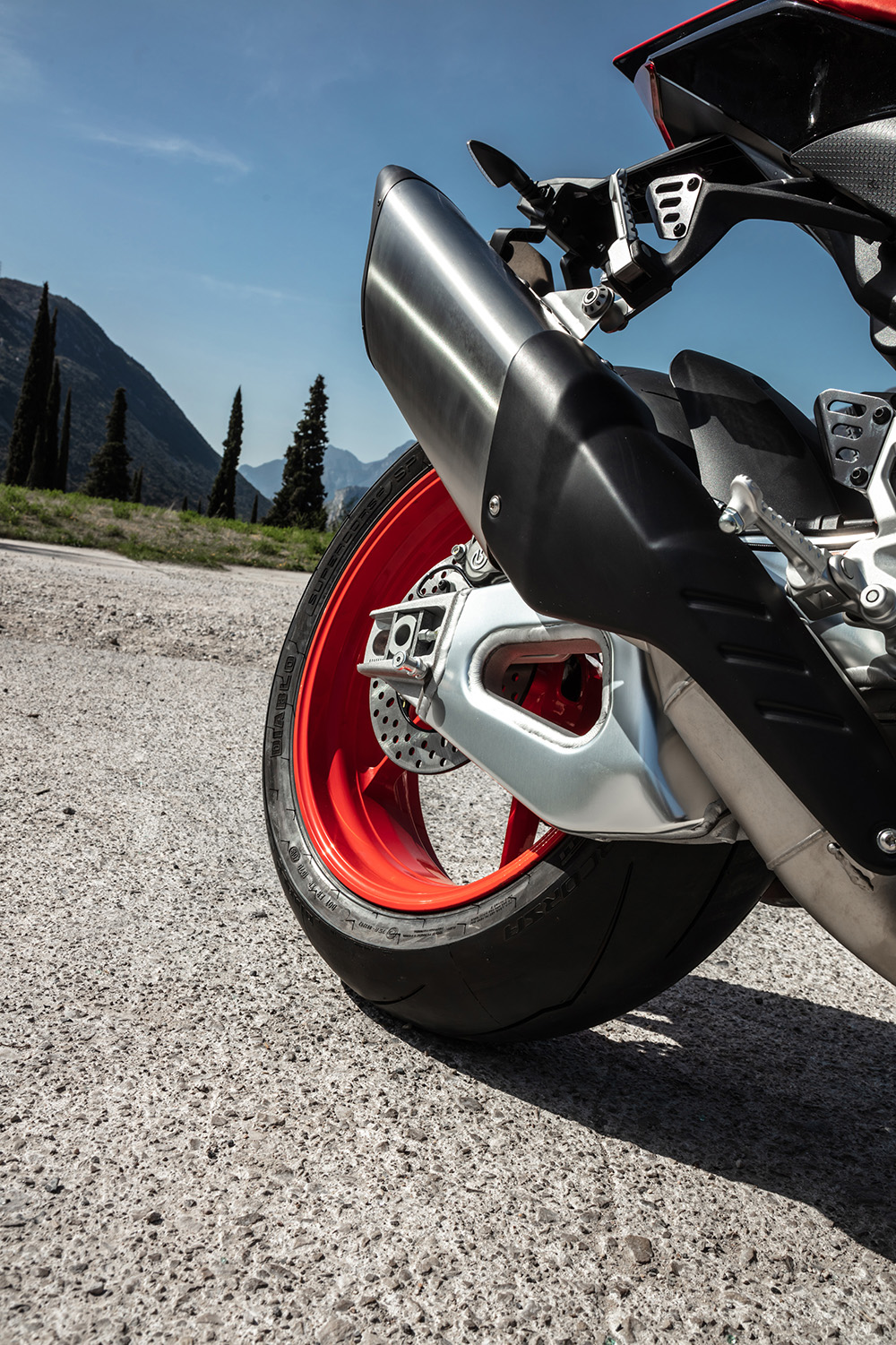 There are three different engine maps (AEM), those three engine braking levels (AEB) and, as before, three settings for Aprilia Launch Control (ALC) and Aprilia Pit Lane Limiter (APL). Let’s not forget the previously mentioned Aprilia Cruise Control (ACC) and the commendable (AQS) Aprilia Quick Shift, which has a new operating strategy for 2021 that even allows downshift with the throttle still open. 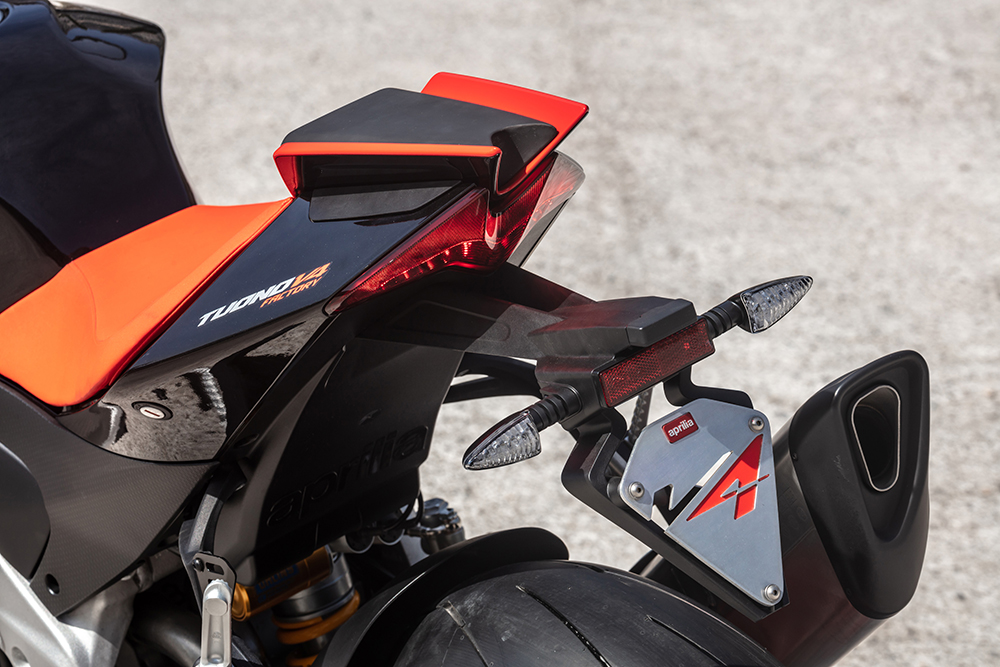 Add the cornering ABS trickery and that sums up a lengthy list of features and safety aids, and all damn easy to use. The dash alone is a substantial move over the previous bike, whose clocks were starting to appear a little dated next to the competition.

I’ve ridden the now ‘old’ Tuono V4 Factory extensively in the past, both on the road and the track, I’ve always praised its accessibility, electronics and handling. It was so complete I couldn’t really see how the model could be significantly improved – but it has been. The rider aids, including the fuelling and quickshift, are some of the best I’ve ever experienced on a roadbike. The new dash and switchgear make the rider aids more accessible. 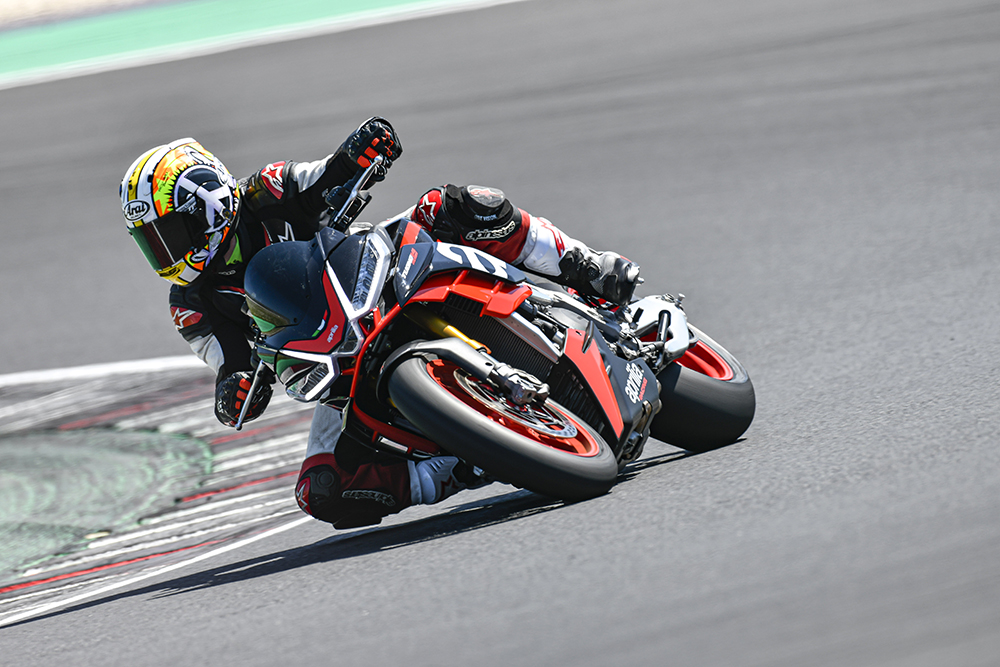 The V4 may not have comparable figures of other Italian supernakeds, but all the power is usable, nothing is wasted, even for less experienced riders and the improved over-rev is a nice touch. The handling is excellent, and the semi-active suspension takes none of the raw feeling away like some systems. Oh, and did I mention the sound and the looks – she is a true beauty. 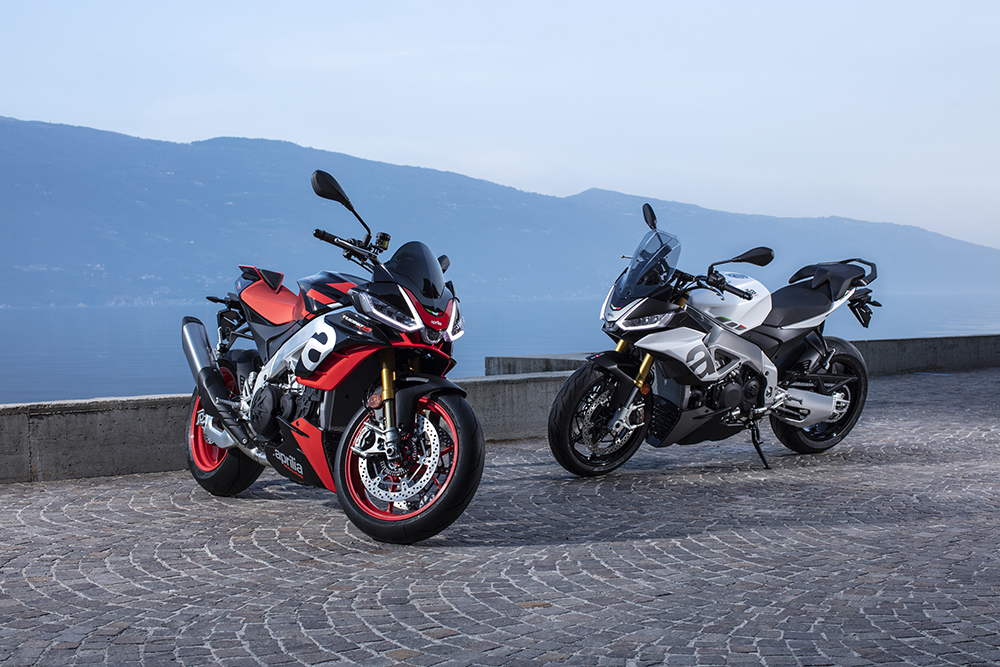