According to a show of hands, the Triumph Street Triple 765 RS does not have the looks to match some of the other bikes on our test, ( Suzuki SV650X, Honda’s CB650F, Kawasaki’s Z650L ,Yamaha’s MT-07 HO , Ducati Monster 659 KTM 790 Duke ) but as far as the riding experience goes, it’s a sensational machine. It had been almost 12 months since I’d last ridden this bike, but from the very first corner it felt as though we had never parted, and all the reasons why it was our 2017 AMCN Motorcycle of The Year came rushing back. The secret to the Street Triple is its ability to inspire confidence. It is the Goldilocks of the motorcycling world. Its 765cc triple-cylinder engine delivers a heap of grunt (90kw/77Nm) without overriding the chassis and the chassis itself is direct and predictable without being racebike sharp. The suspension is firm, yet somehow still comfortable for all-day riding, as is the seating position, and the electronics are some of the easiest to use and understand – it’s all… just right. All of this goodness comes with a price tag of $17,550 (plus on-road costs). There is also the S ($13,800+) and R ($15,850+) models available, and at the bike’s launch, Sam Maclachlan picked the R as his favourite. The R comes with lower-spec brakes, suspension and tyres, but we like to spoil ourselves on these rides so we went straight for the top shelf RS which, as well as a few extra goodies, gave us the fully-adjustable 41mm Showa Big Piston Fork and fully adjustable Öhlins STX40 monoshock, as well as the Brembo M50 four-piston radial-mounted Monobloc callipers which bite twin 310mm discs. The Street Triple is not a big bike, but there were a couple of big guys on our test team and no one said they felt like a gorilla on a Postie bike while riding it. Everywhere you look, the Street Triple oozes quality and there does not seem to be corner cut anywhere. From the tricky span-adjustable levers that can be set exactly how you like them, to the small ’bar-end mirrors, and one of the best quick-shifters in the game – albeit up only.

It also has a super-bright TFT dash which uses a mixture of numbers, colours and icons to tell you everything you need to know at a glance. Why have the word Sport for a riding mode, when you can have a twisty-road icon? It even has backlit buttons on the switch blocks. 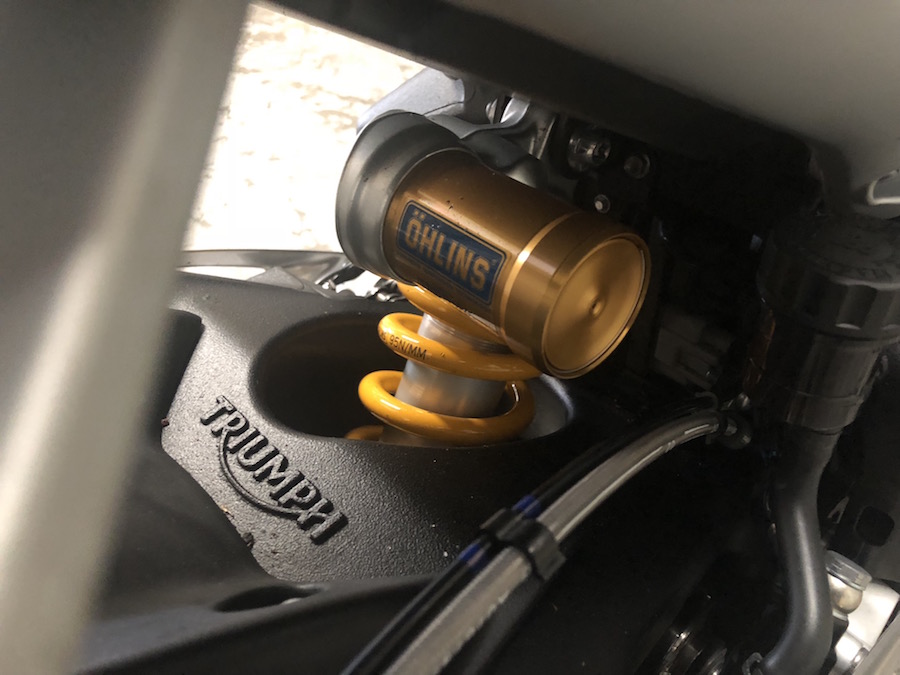 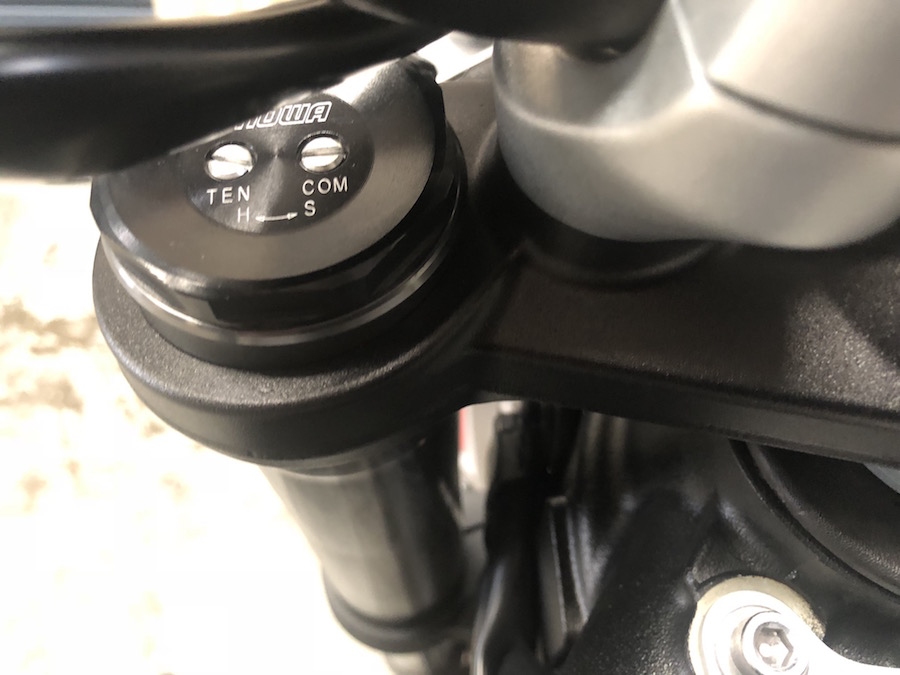 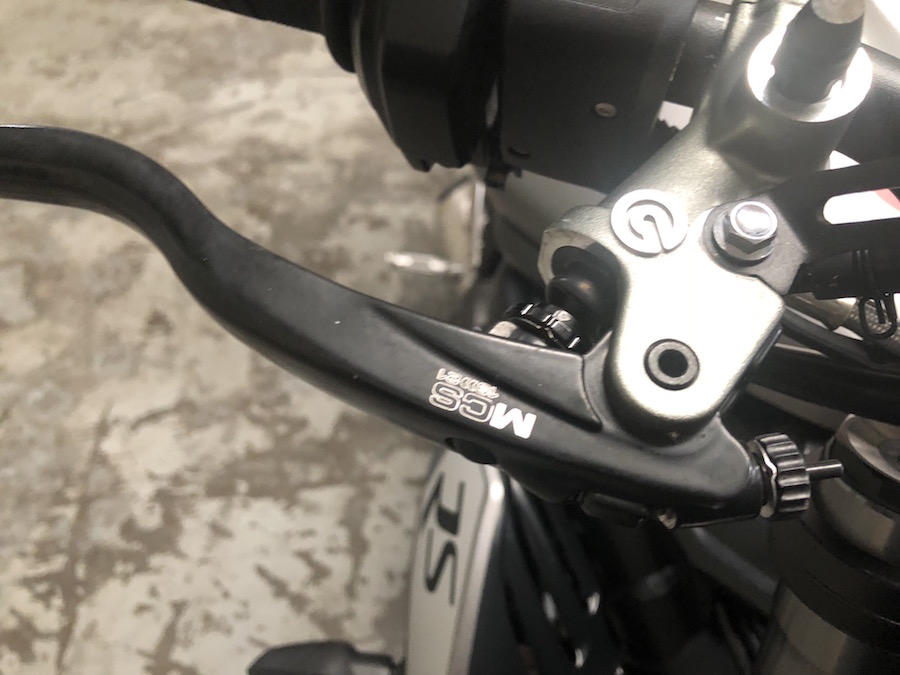 I find the dash extremely easy to read, and the auto-contrast function is great, everything is easy to use and understand.

Along with the Honda, the Triumph is one of only two bikes on the test to use a twin-spar frame, the other six are a tubular-steel trellis style.

One thing the Triumph does not have is an IMU to tell the ECU, traction, wheelie control and ABS  which way is up. The new KTM does, however, and with the bar constantly being raised by manufacturers, expect the excellent electronics on the Street Triple to take another step when the next model is released. 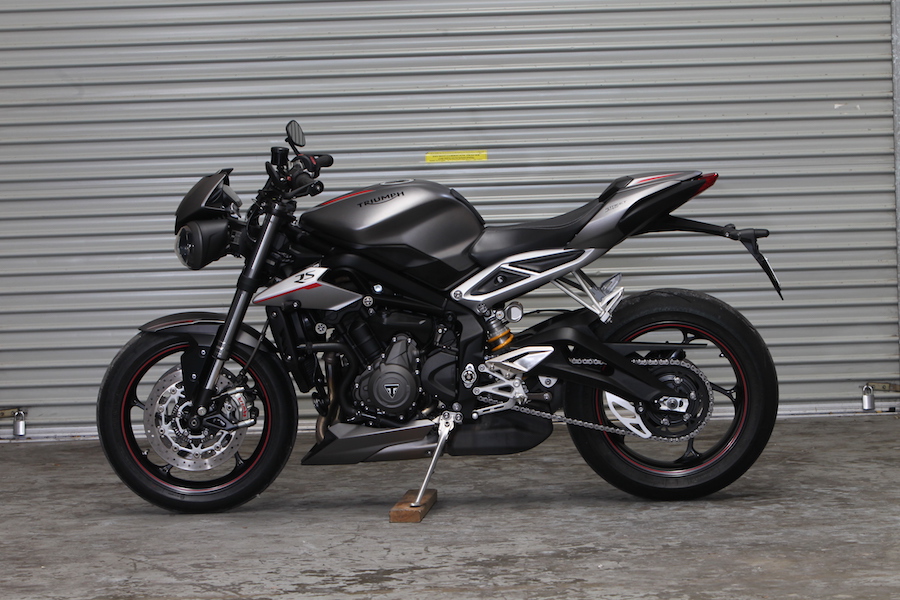 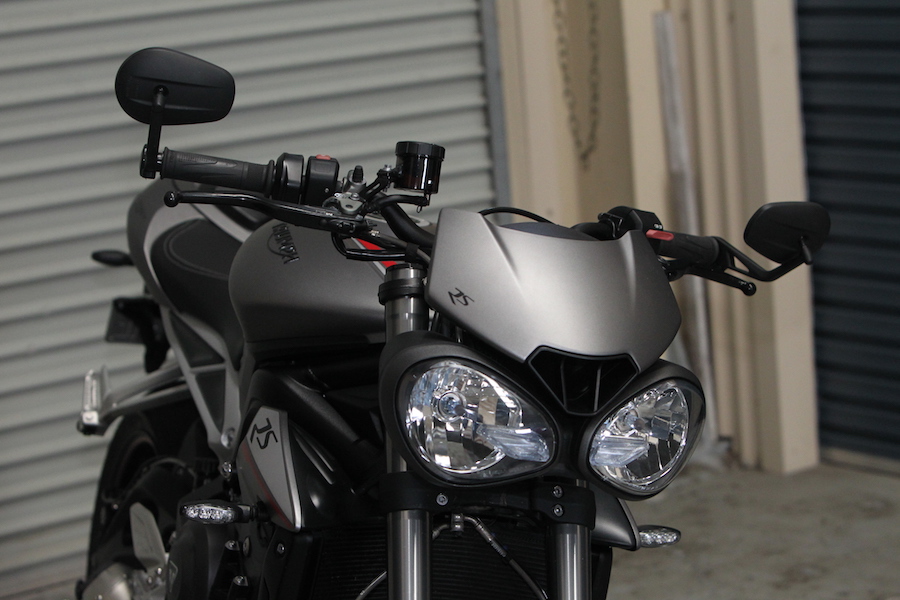 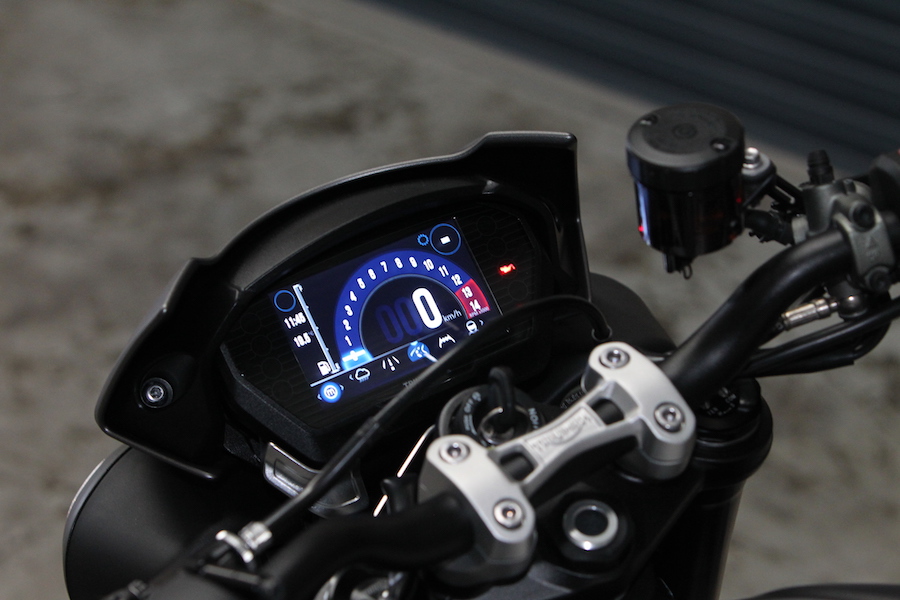 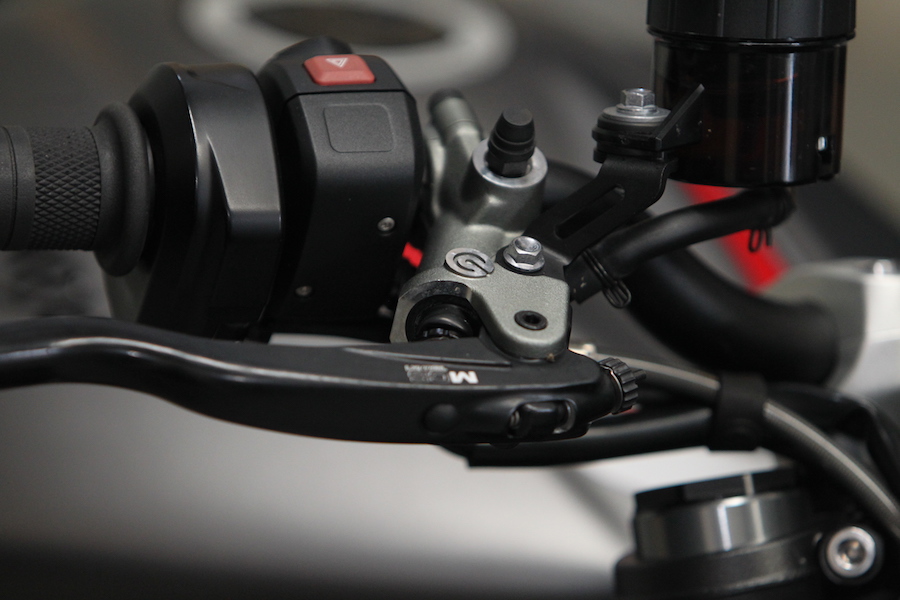 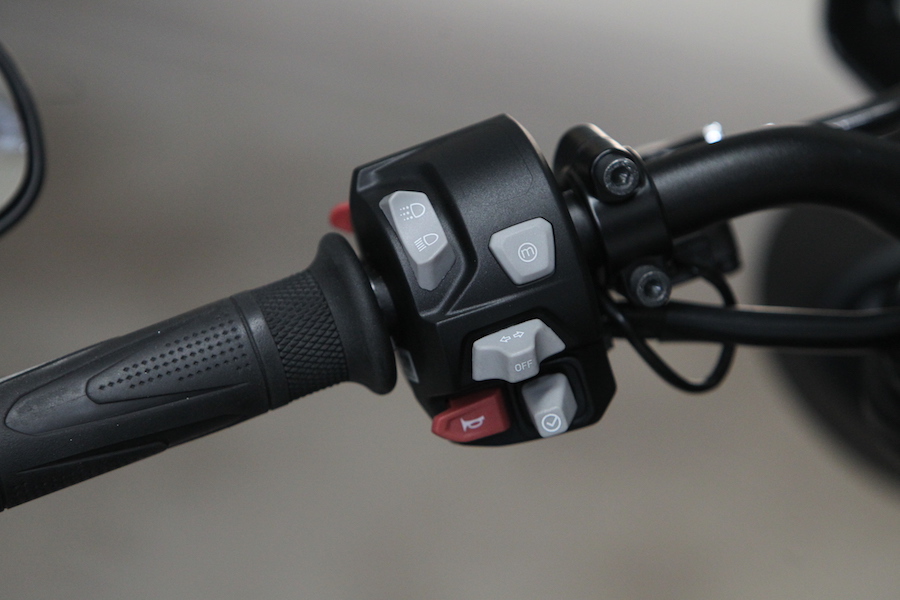 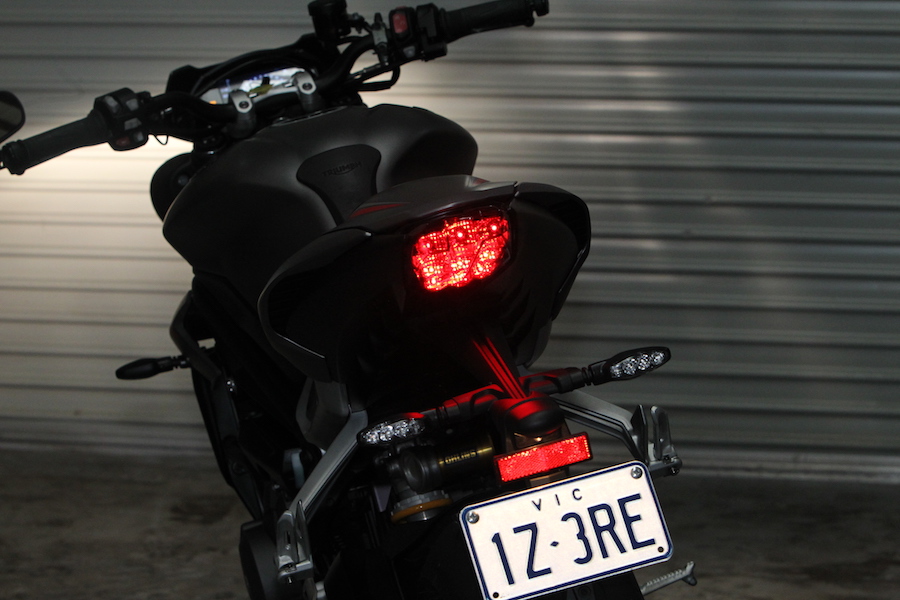 The Triumph Street Triple 675 RS best when he called it a Jack of all trades.

“You can ride it day to day, take it to a track and even go touring on it – what’s not to like?” After two days of jumping on and off the Street Triple 765 RS, I was really struggling to find something I didn’t like about the middleweight Triumph. In the end it came down to the fact the spring on the Öhlins rear shock was way too soft for spirited riding for me, but in the defence of Triumph, it’s pretty hard to correctly spring a bike for everybody and it’s something an owner should be prepared to do when they purchase any motorcycle.

There is just so much to like about the Street Triple, starting with a great riding position featuring decent leg room that puts you in a comfortable stance for cruising, commuting or having a fang on a twisty road. I found the dash easy to read and navigate, I was also a big fan of the auto adjust feature for differing light conditions. There’s a comprehensive suite of electronic adjustments including traction control and various riding modes, possibly the best upshift quickshifter on test and, of course, that engine. Nothing rivals the sound of a triple-cylinder engine on full tilt, and this particular offering from Triumph is an absolute perler, I can’t wait to hear the glorious symphony from the Moto2 class equipped with a variation of this very powerplant over the next few years. The Street Triple has always been a benchmark in its class, but has never rested on its laurels. The RS is good, but the competition’s high, we can’t wait to see what’s next.

In Europe all cars and bikes seem to be black, silver or grey, possibly to match their weather. We still like colours in Australia (and sunshine). Three flavours of the Street Triple are available. The S, R and RS. Among other differences, the S-model has a 810mm seat height, 15mm lower than the R and RS.