There was a collective sigh of disappointment when KTM dropped its single-cylinder 690 Duke from its line-up. Of all the Dukes, the 690 retained the strongest DNA link with the Austrian company’s original game changer, the 620 Duke. But KTM had something better in mind for us, and now it’s here; the 790 Duke.

Running through the eight bikes on test, from the most affordable to most expensive,( Suzuki SV650X, Honda’s CB650F, Kawasaki’s Z650L ,Yamaha’s MT-07 HO , Ducati Monster 659) the 790 Duke is the first with switchable engine modes and traction control, and that’s just the start of the list of electronic goodies this bike has. At $15,495, owning the KTM requires an additional $4500-$6000 investment over the bikes without such electronic trickery. Once again, KTM has done its own thing when designing the 790 Duke, flying in the face of the mid-capacity naked norm. It’s high and narrow with a tailpipe that looks like it has been taken from a motocross bike.

The all-new compact parallel-twin LC8c engine has 75-degree off-set crank pins and 435-degree firing intervals. The sound when you thumb the starter makes you take another look down at the engine to make sure it really is a parallel twin – there’s that DNA.

Four switchable modes are available thanks to its ride-by-wire throttle; Rain, Street, Sport and Race, the last one allowing you the dive into the settings and modify things such as power output, traction control and ABS which can be put into Enduro mode to deactivate ABS to the rear wheel. An IMU provides lean-angle sensitive traction control and cornering ABS, as well as wheelie control. There’s even launch control if you need to get away from the traffic lights in a hurry. 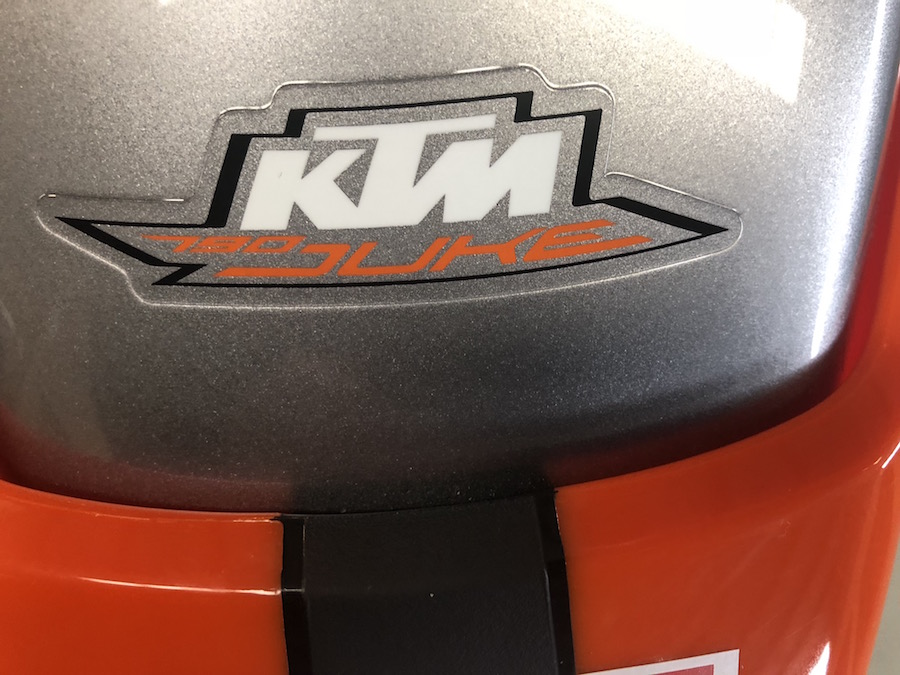 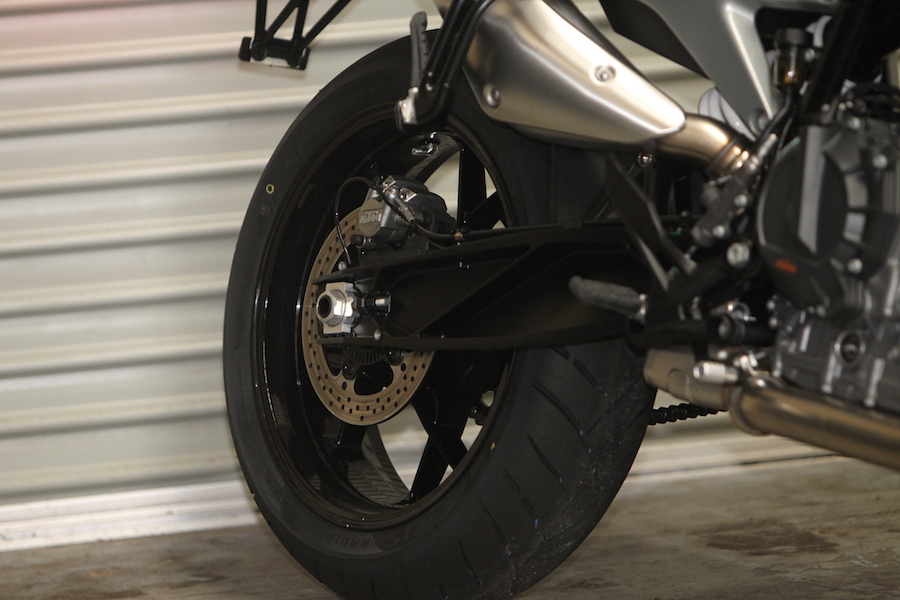 Two things happen when you jump onto the KTM 790 Duke. Firstly, you feel at home because the TFT dash layout and button configuration on the switch block are similar to other KTM models. But you also feel like a hoon. It’s something KTM manages to build into all of its models. Within minutes of letting out the clutch, you want to try for a wheelie. This possibly has something to do with the seriously upright riding position which gives the bike a supermotard feel.

The 77kW and 87Nm is impressive from the 189kg package, and the IMU lets you brake late into corners and get on the power super early without fear of being spat to the moon.

It seemed it would take serious rain, possibly ice, to coax any of the team into Rain mode, and in Sport Mode you can give it a full twist of the right hand and the IMU will tell the wheelie control to give you just a little front-end lift while still delivering a heap of power to the rear. However, a few of us found the fuelling iffy cruising at freeways speeds as the engine showed signs of hunting. 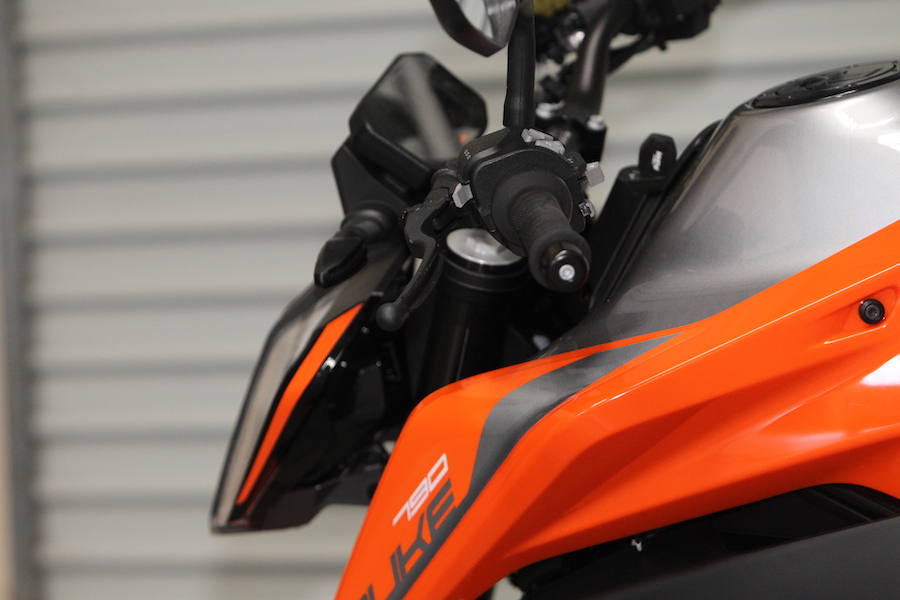 While the styling divided opinion, everyone agreed the build and ride quality was excellent.

There’s so much to like about it and it’s incredible value for money. It has a non-adjustable front-end, and for $15K I’d probably want at least preload adjustment.

Maybe we are being greedy asking for adjustable kit, I guess KTM needed to leave a few things up its sleeve for a R version. KTM has developed the best parallel-twin on the market. It sounds like a V-twin and it pulls like a V-twin, so much so that you wouldn’t look like an idiot if you believed it was. Power is smooth from idle until a mid- range surge punches you in the chest.

The KTM is draped in electrickery mid-sized models usually miss out on, and comfort-wise, the KTM is really good – one of the best on the ride. The only thing I didn’t like about this bike is personal – I reckon it’s ugly. It may grow on me, but it is no 1290 Superduke, which is downright sexy.

All-in-all KTM has produced a middleweight naked that would shame many Supernakeds on the road. The up-and-down quickshifter is top notch and made all the more better by the Motor Slip Regulation (MSR) which matches revs to speed on downshifts.

Any changes you make to the traction control, power and ABS setting in Race mode default back to factory each time the ignition is cycled. 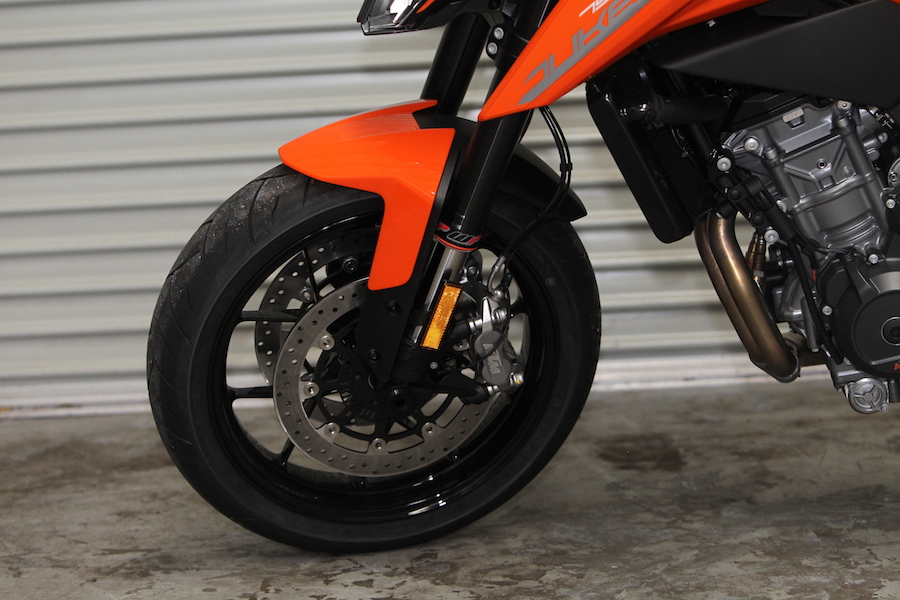 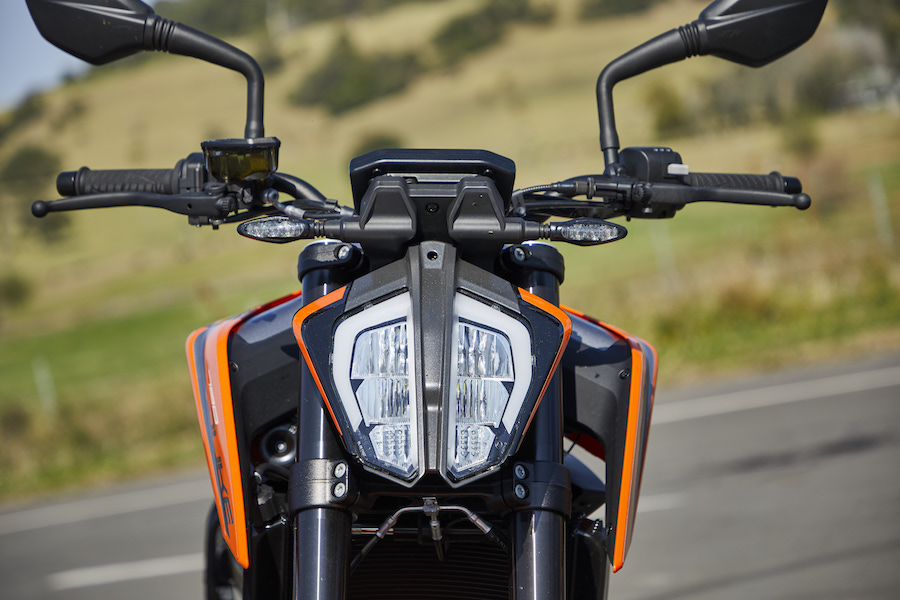 KTM first made its name with off-road bikes, but it was KTM’s very first roadbike – the 620 Duke – which was the first to get the famous KTM orange colour.