Justin Chisholm’s loyalty to the Yamaha tuning fork logo stretches all the way back to when he was a kid, bashing around the local minibike tracks on a bright yellow GT80.

As an adult and a custom bike builder, Chisholm was given the opportunity to become reassociated with the Yamaha brand and channel his creative juices into the Bolt C-Spec, a café racer version of Yamaha’s popular Bolt model.

“I already had a soft spot for the regular Bolt, and the C-Spec has been done in such a cool way, I got one to customise when it was released,” Chisholm said.

At the heart of the project is a bright yellow paint scheme based the GT80 he owned as a kid. The paint work was done by Lawrence and his team at Collide a Scope at Hornsby, NSW.

“Lawrence tolerates my crazy projects and makes them reality including the GT95 logo,” Chisholm said

Thanks to its bright yellow colour scheme the GT95 attracted a fair bit of attention at the 2015 Throttle Roll event in Sydney, and while it spent two days sitting on scaffolding being admired by onlookers, the bike is no trailer queen.

Like all of his creations, Chisholm has built the GT95 to be ridden, and had no hesitation in handing us over the keys for a test ride. 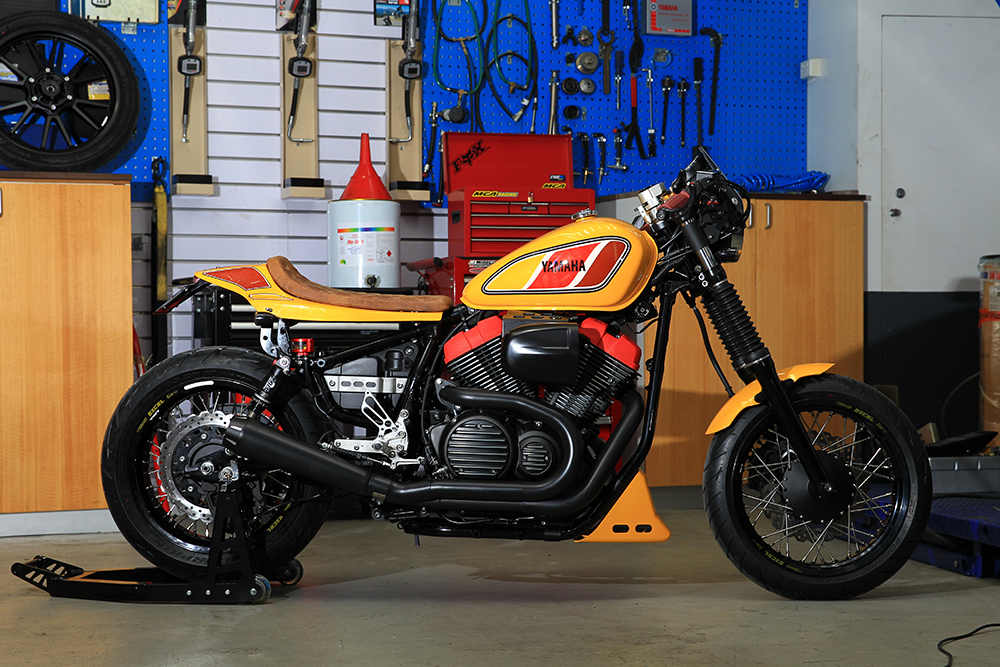 The riding position is very much suited to taller riders, and the high rearsets make the most of the Bolt’s long wheelbase. From the rider’s seat it feels like an historic racebike – but the brakes are anything but – the single Brembo up front has the bite of a cut snake.

Thanks to 17-inch rims and a 30mm height increase at the rear, the GT95 feels nothing like the Bolt. It turns in better than you expect it to; on the road it feels just like an old-school racer.

The modifications have changed the steering angle dramatically so the damper will probably come in handy at high speeds.

While there’s plenty to admire on the GT95, its seat and tail are a work of art. The tail is a generic flat-track unit, with hours of fabrication time invested to make it fit. The seat is trimmed in distressed leather with quilted stitching. It’s all work done by hand by CCU Motor Trimmers in NSW’s Moorebank.

An enjoyable afternoon of playing with the Fox Float air shocks could easily be had. They have adjustable air chamber volume to adjust rising rate and you can also tune compression and rebound with air pressure.

The GT95 isn’t about outright speed or power, it’s about the journey and arriving in style – the rumble from the exhaust system and bright yellow paint scheme makes sure you get noticed.

The GT95 is based on Yamaha’s Bolt C-Spec.

It’s a café racer inspired version of the Bolt XVS950 cruiser. The C-Spec itself was the brainchild of another custom builder. 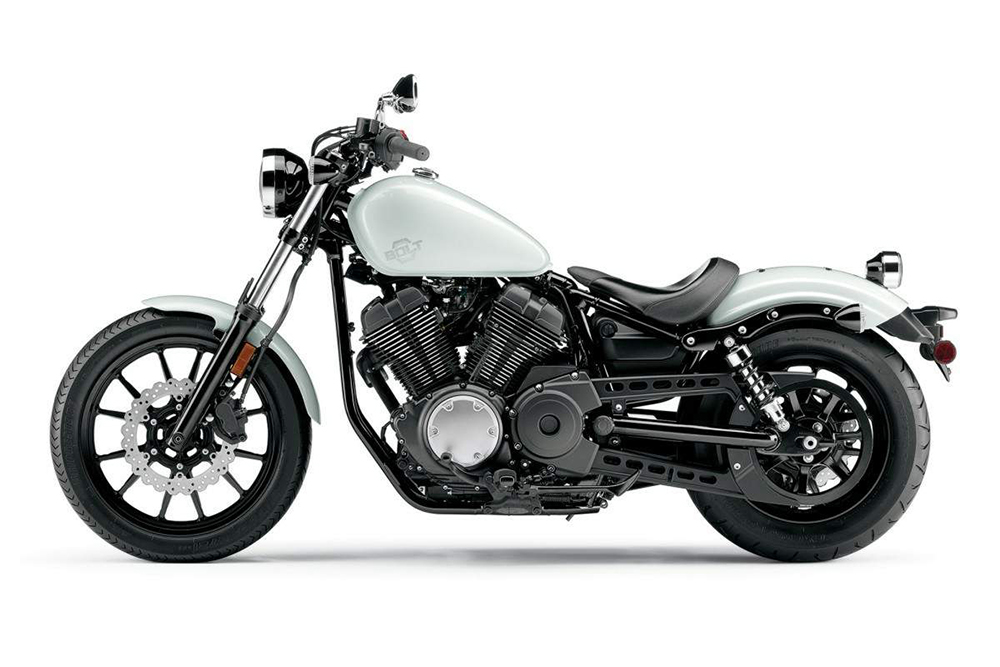 The 950cc V-twin is fitted with a Cobra Powerflow air filter and upswept exhaust from Bassani.

The black 17-inch Excel rims have been laced up with chrome spokes by Ash’s Spoked Wheels and fitted with Pirelli Scorpion dual-sport tyres.

The Yamaha TTR125 Fox Float shocks have adjustable rebound and compression, a tunable air chamber to vary the rising rate and are 35mm longer than stock. Spring rates in the standard fork have been changed and air caps fitted.

A four-piston Brembo caliper and 320mm custom rotor from Metal Gear assist with braking. The steering damper from GPR required milling of the top triple clamp as well as a custom mounting system. 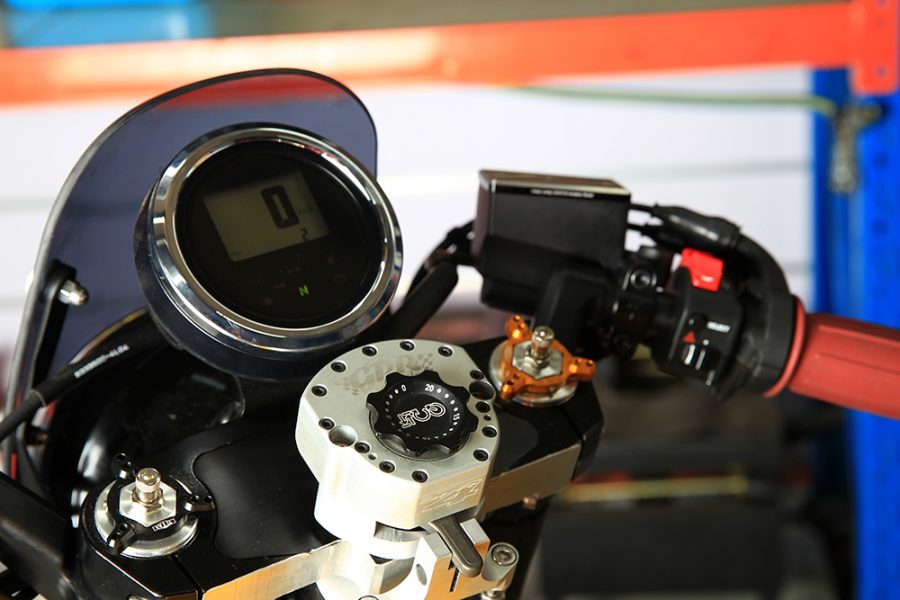 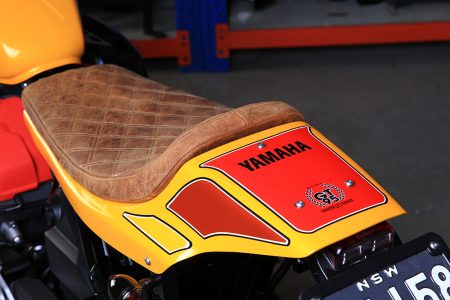 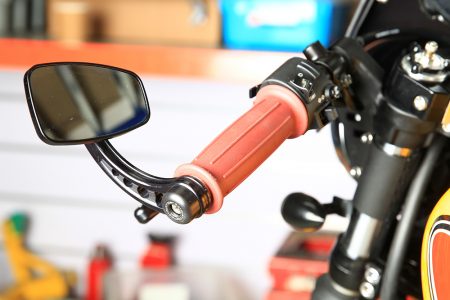 Fitting the Sato rear sets was a fiddley job and included drilling and tapping into the swingarm pivot as well as making mounting and support plates.

Like so many custom-bike builds, lots of little hidden things had to be considered and tweaked to make things work. Justin also fitted a Yamaha chin fairing, old school grips and cut down the front guard. Fitting the base for the tracker seat was a lot tougher than people may realise. On the surface it looks like a straight forward job, but underneath there’s a mile of modification to make it look like a factory fit. 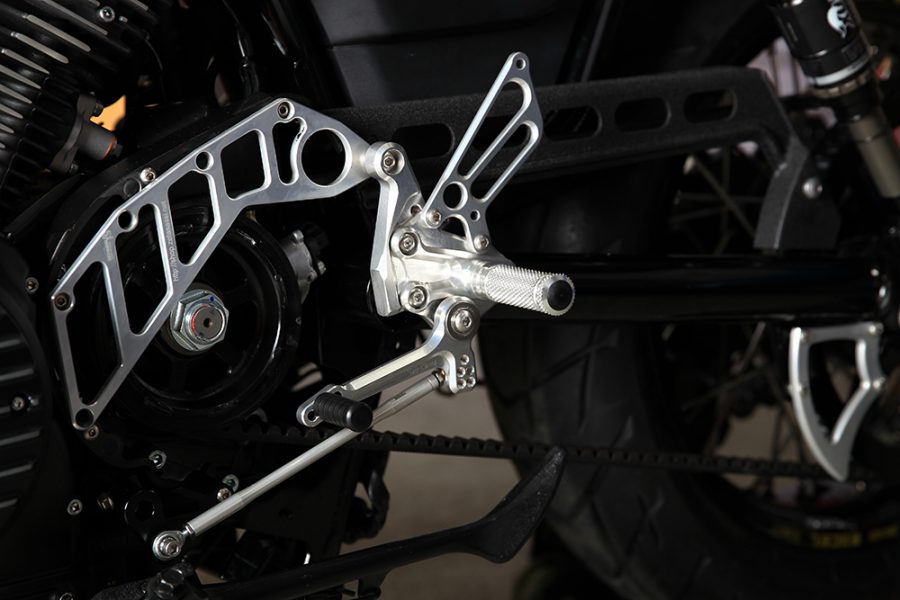 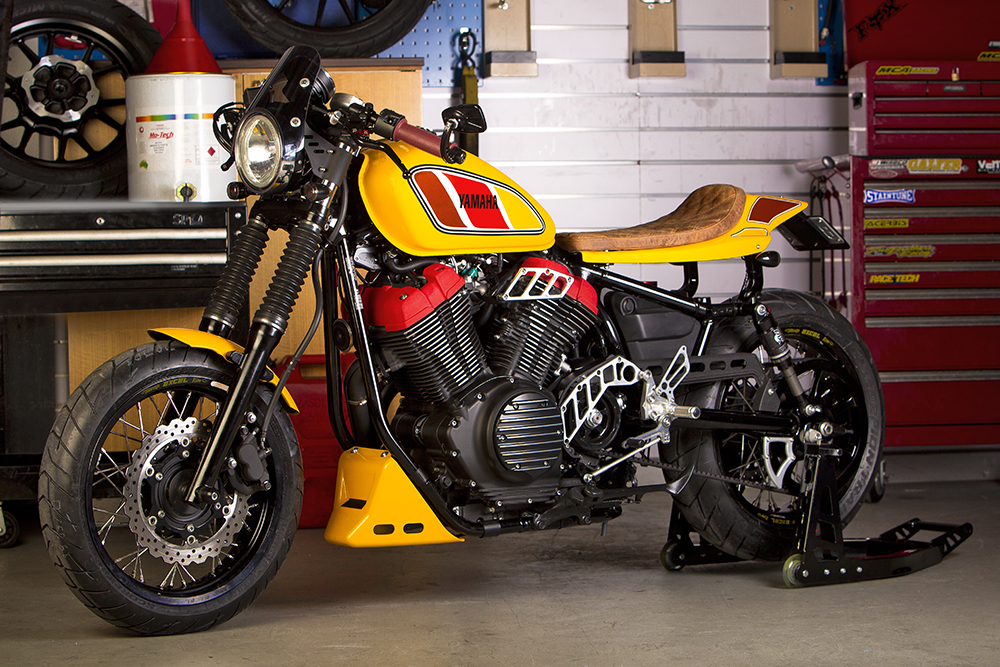