OUT OF THE SHADOWS: YAMAHA SR400 LA SOMBRA | Custom Cool

Black Pearl Chrome SR400 from the Dark Side

The once-ubiquitous Yamaha SR400 has become a collector’s item among the café racer set. The simple little single-cylinder motorcycle makes a perfect blank canvas for a cool custom project due to its simple and timeless design.

It’s been christened La Sombra, a Spanish word meaning The Shadow. Its centrepiece is the shiny black pearl finish on the petrol tank, tail and front guard.

“I think every bike needs a character, there’s no point building something unless it has a character, right from the beginning,” Jason says. “We give each of our custom bikes a name and when we talk about a particular bike we only refer to it by name only.”

Looking over the bike in its newly-finished condition, it’s easy to see Jason is very satisfied with the result he’s achieved.

“We were over the moon with the final result and this bike has turned out even better than we imagined it would,” Jason said. “It has simple lines but it has an effective finish.”

One of the main goals for the La Sombra build was to end up with a motorcycle that looked like a customised classic SR400 café racer, but makes it feel like a new bike to ride.

“It really is like riding a brand-new Yamaha SR400,” Jason said. “It’s fitted with a performance engine, so it’s not as sluggish as the older SR400s were. It’s surprisingly comfortable for a custom bike and would easily handle long trips,” he said. 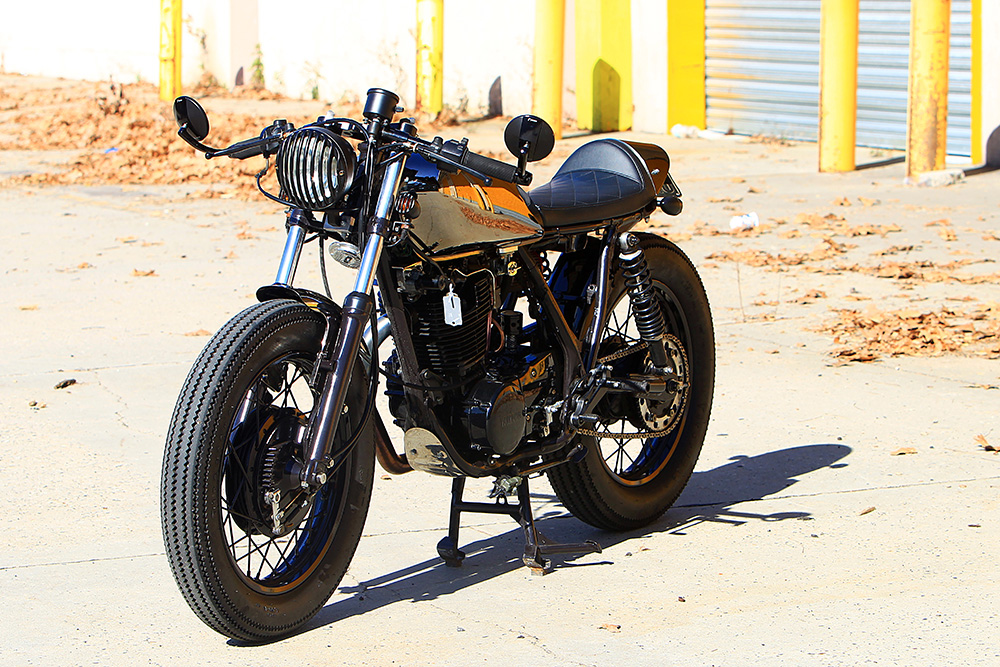 The inspiration to build La Sombra came from one of Jason’s customers, Michale Kriesch, who approached him last year to build the dream custom café racer he had always wanted to own. Kriesch had a particular style in mind and worked with Jason to design the dark mirror styling of La Sombra. Jason said he always looks to his customers for inspiration and then they work as a team to guide the build in a direction with which everyone is happy. 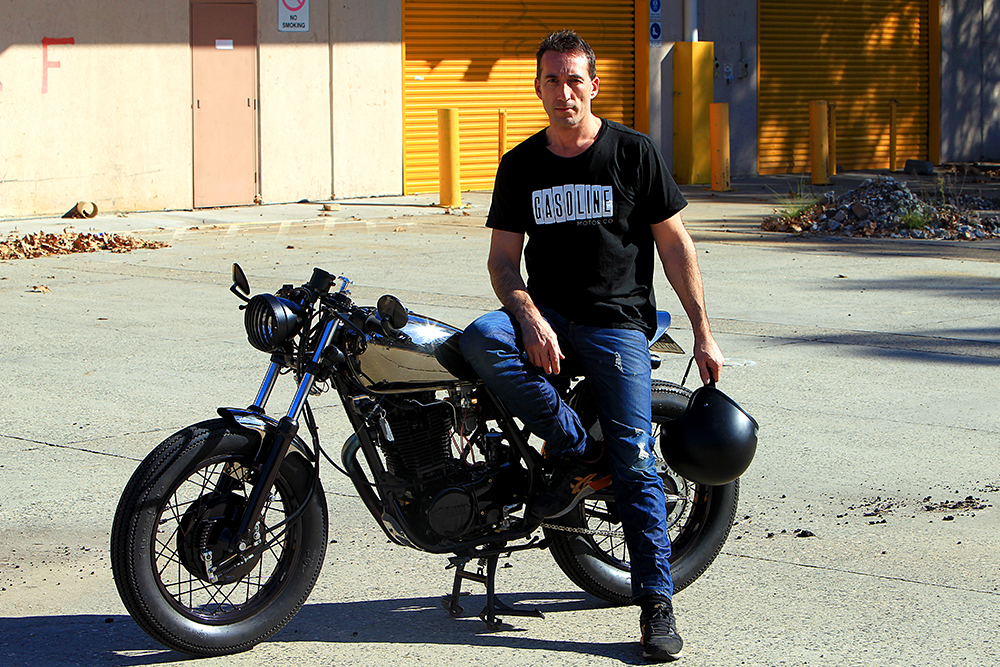 La Sombra is based on a 1986 Yamaha SR400. The little single-cylinder motorcycle has been in constant production in Japan since 1978, barely changing during all that time – it even retains a kickstarter.

The 1986 SR400 used for Jason’s custom build features drum brakes front and rear. “Normally we do a disc brake front end conversion when working with an SR400 of this vintage but we wanted to keep this one original,” Jason said.

“The SR400 is a great little bike to work from as a base if you want to do a café racer type build. 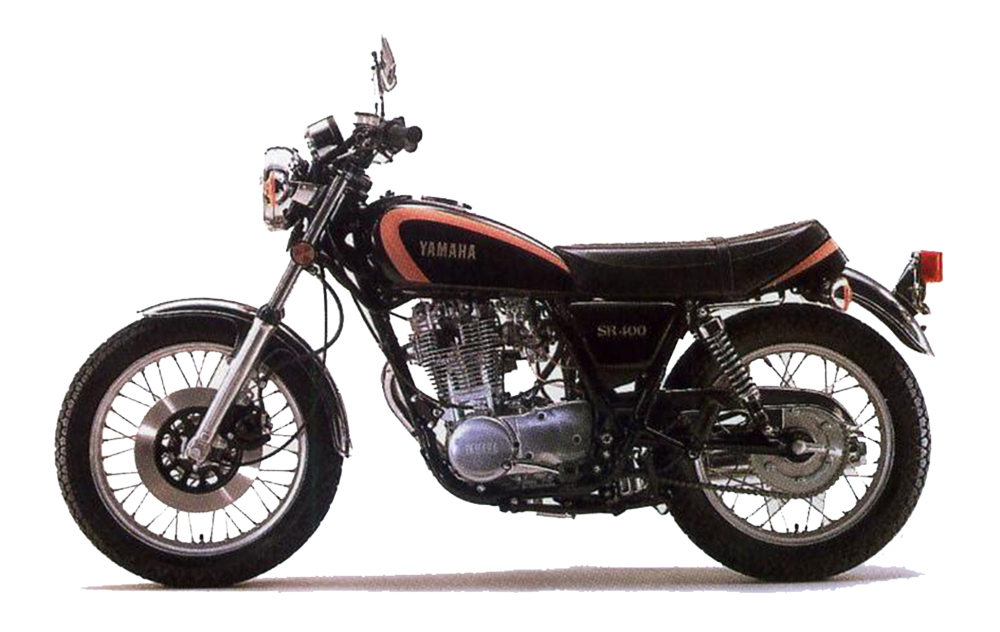 The 399cc, air-cooled, single-cylinder, SOHC, two-valve-per-cylinder engine in La Sombra has been fitted with a 38mm Mikuni carburettor and manifold as well as a new piston to increase compression ratio to 10:1. The cylinder head and cylinder were given a make-over with the valves and valve-seats machined. The engine was also blue-printed.

The exhaust system may look like just a straight through pipe, but a baffle has been fitted to the system to reduce noise. It still sounds meaty, but loses the headache-inducing bark of a straight-through system.

The frame was taken back to bare metal and powder-coated and the engine was given a full blacked-out treatment.

The original tank was retained to keep the standard SR400 look.

The original front fork and both wheels have also been powder coated and the rear shocks have been replaced with Ikons, made in right here in Australia.

Another interesting touch are the military style lights and indicator covers. During war years, motorcycles were fitted with similar covers to minimise any peripheral light which might give the enemy something to shoot at. 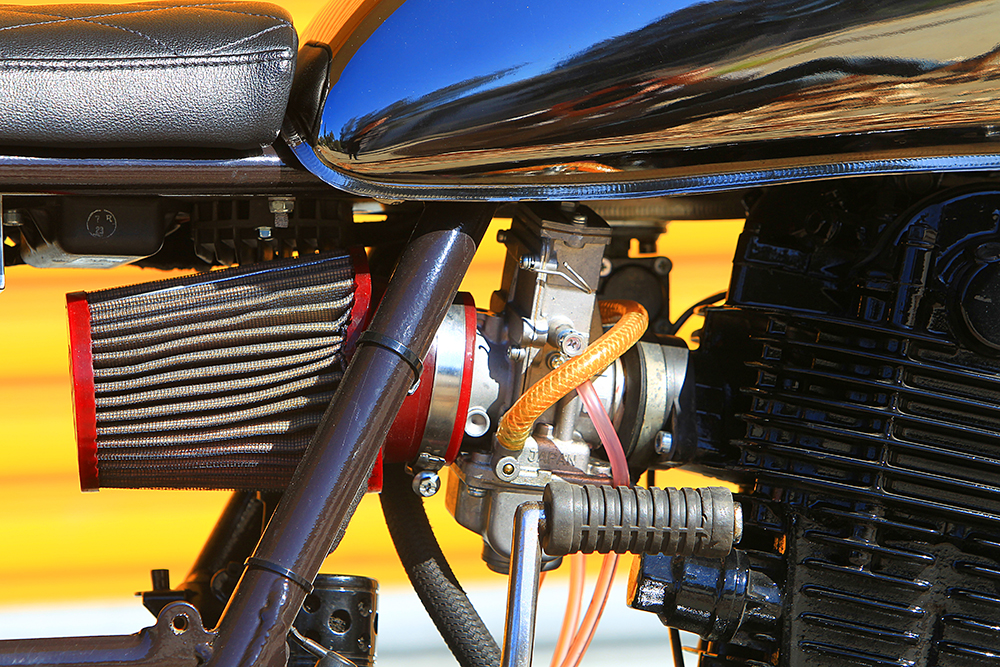 The build process took three months and the black chrome finish on the petrol tank, tail and front guard was a complicated process. The donor bike was stripped to the bare frame before the build even got underway. “The unique colour is called Black Pearl, it’s applied using a chrome-type sequence which includes dipping,” Jason said.

“It’s like a nickel-plate as opposed to a zinc or chrome plating. To get the look resembling a shiny black pearl on all the surfaces was quite difficult.” 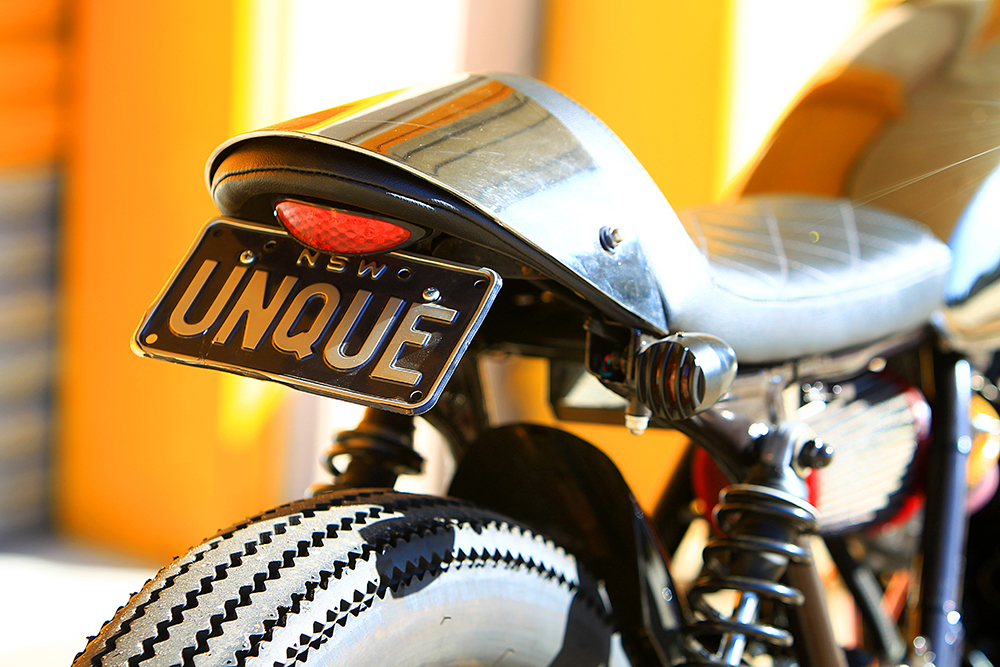 La Sombra is the most typical café racer style motorcycle you’re ever likely to ride.

“Using the kickstart lever to
get it going is all part of the experience,” he said.

“It’s got a beautiful sound to it, especially in third and fourth gear and I actually don’t mind riding it without the baffle.”

Fitting the high-compression piston and head has given the 399cc engine extra squirt, and Jason reported the drum brakes are more than up to the task of stopping the bike. 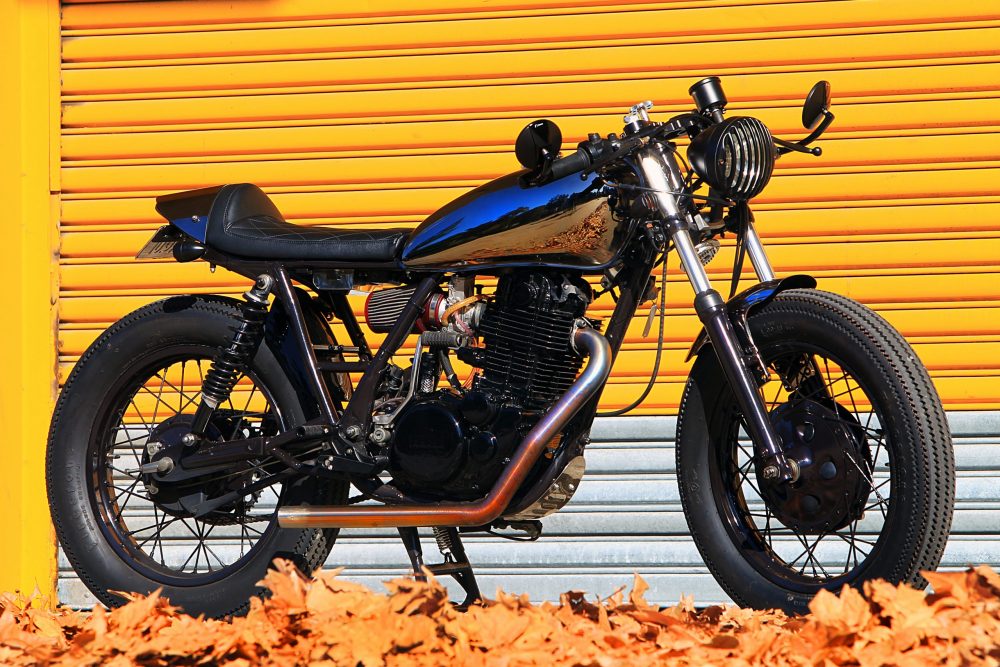