Film critics say George Miller’s Mad Max reboot redefined action movies. Here’s the inside story on the motorcycles that have a starring role

Into the sandy hell of Fury Road roars a convoy of Aussie-built jalopies. Bouncing along beside them are squads of outriders on some of the trickest motorcycles you’re likely to see.

They look like backyard lash-ups screwed together by bikers with a lust for raw adventure.

For Aussie off-road legend Stephen Gall this has been a part of his life for the past two decades. Gall has travelled Fury Road with director George Miller’s core crew since way back in 2007.

He worked with stunt co-ordinator Guy Norris and production designer Colin Gibson to create a survivalist theme for vehicles used in the movie.

“We ended up building 47 motorcycles in a converted bus terminal in Villawood, Sydney, alongside the film’s cars and trucks,” he says.

“Initially we secured pre-production FZ1s and R1s off Yamaha Australia and fitted them with long swingarms, as used in American hillclimbing.

“They had to look like bitsers, made up from scrounged materials, to suit the Mad Max image.”

The bikes were tested at Gall’s Gold Coast base and on a special dirt track outside Broken Hill in 2010.

“Eventually we settled on a range of Yamaha WR, YZ and Tenere 660 models with some special versions of the R1, a Honda Gold Wing and a Royal Enfield with a sidecar,” Gall says.

Yamaha provided most of the motorcycles and still owns 10 of them, as they were Australian pre-production models. Some of them can easily be turned back into standard form.

A crew of up to half a dozen mechanics built the bikes and maintained them on the film set. As a rule, whenever there was a hero bike that would appear in front of the camera there would always be a duplicate ready as a spare.

“Our chief mechanic was Matt Bromley (owner of DeVice Custom Motorcycles in Newcastle), who was in charge of the Villawood workshop and then spent most of 2012 with us on the set in Namibia in south-west Africa,” says Gall.

It was a huge operation, with a film crew totalling 1500 and a cast of 55 actors.

“There were at least 100 stunt performers on the set and the energy was amazing,” he told AMCN.

“When we weren’t filming, my stunt crew had their own jumping practice area where we’d be riding a YZ250 and FZ1000.”

Here Gall explains, the major motorcycles featured in what become one of 2015’s most popular and talked-about films.

“One of five R1s used in the movie. We took one disc off the front to reduce weight. All the R1s had a Dunlop 5.00 x 17 front knobby tyre and a Continental knobby on the rear six-inch rim. This rear blew out to a nice rounded profile and worked well. “Matt Bromley designed the stainless steel paddles to attach to the Conti tyres to help get drive in the deep sand. During pre-production filming and machine testing, we used a 1km-long freeway-width dirt pad constructed out the back of Broken Hill.

“The R1s would drift from side to side of the 60-metre-wide strip up to 140km/h. The big problem was if you got it too sideways you ran out of steering lock, almost causing a highside.

“This bike was the most fun to ride in the dunes – the roost of sand looked incredible.

“Tom Hardy never rode his R1 in the film. He would stall a YZ250F practice bike three times out of five attempts, so we gave up and used Cody Mackie. In real life Tom doesn’t even drive a manual car!” 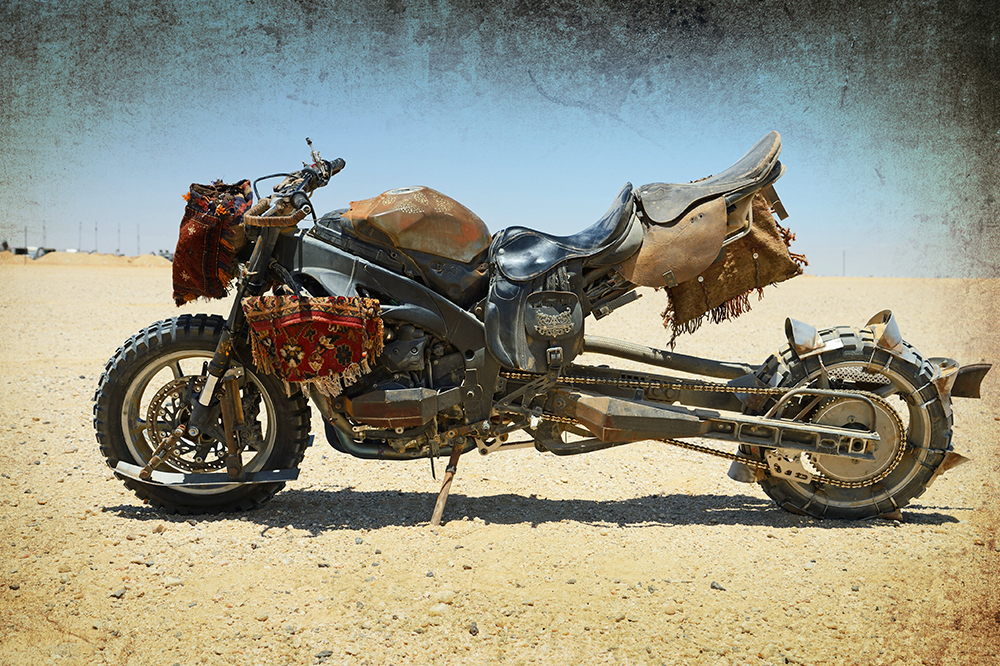 “Colin Gibson is a visionary, always thinking about how to get a variety of inspirational machinery on set, so a Bobber had to be part of the action. It’s an old BMW flat-twin with a rigid rear-end and semi-chopper front end.

“Matt Bromley came up with the idea of the front-fork skis that we fitted to most of the bikes. They saved me from crashing in the scene where the women bikers ride down the big sand dune to meet the War Rig.

“The front end dug in and it was only these skids that saved me doing an endo. They were adjustable on threads for fore-and-aft and sideways clearance.

“Charlize rode a motorcycle as a kid in South Africa, so I was able to bring her up to speed on a YZ250F. In the film she rides at the head of the women bikers. It’s a great scene.” 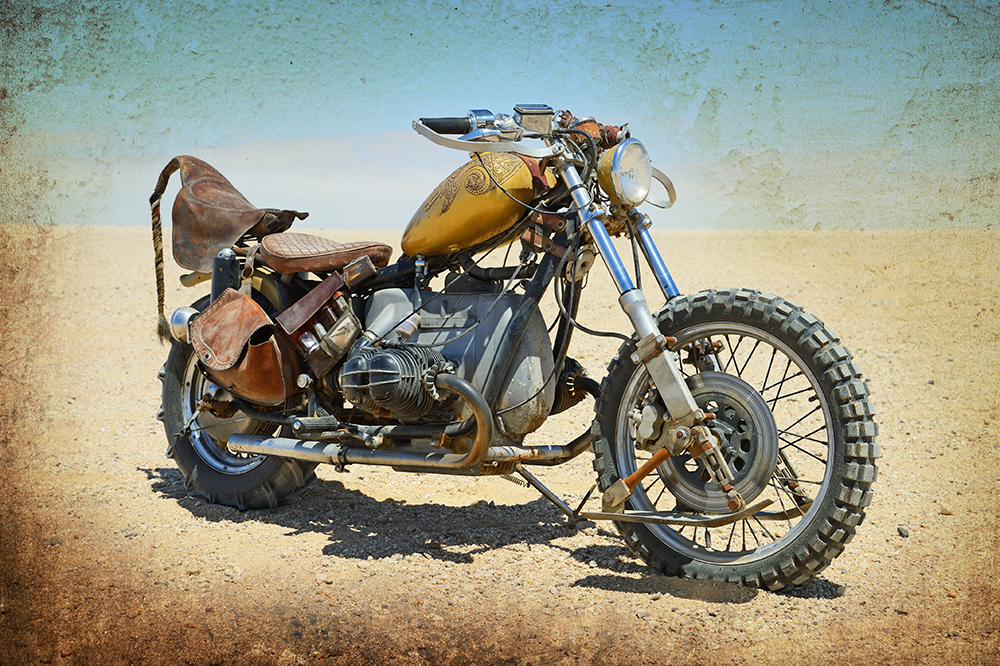 “This is something special. I’ve seen a lot of motorcycles in my time, but this one is right outside the square. It’s based on a YZF450 Yamaha. The extra fork legs are attached for looks, but in fact they’re empty inside, so they provide no suspension assistance. The Motard look includes the tyres, which give it a street feel. The seat was very hard so it wasn’t much fun to ride. The extra weight of the forks made the steering heavy but it still worked okay, although it was difficult in the sand – though not as hard as some of the heavier roadies.

“I personally loved the look of this bike. It’s not seen up close in the movie but it is in the shots where you see the armada of vehicles heading across the desert chasing the War Rig.” 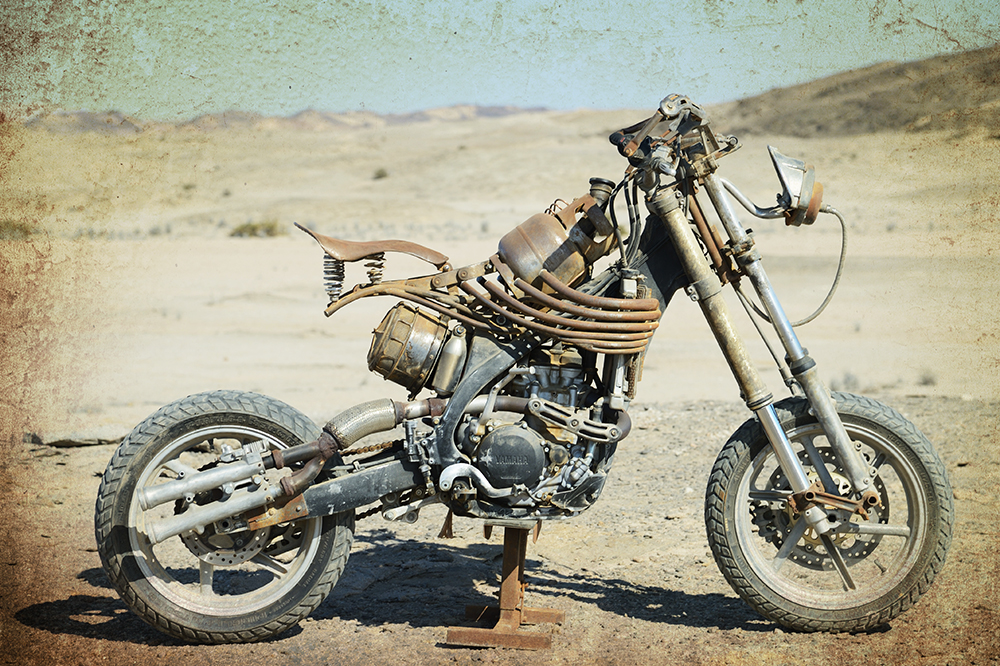 “I rode this Tenere 660 in the scene where the female bikers are heading to a better place before being turned around by Max.

Even though we had a paddle tyre on the bike, to start forward motion we all had to get off and push to build momentum. I had a pillion stunt double girl and there was another stunt double girl in the sled. Then we would all jump on to complete this scene.

“This part of the film involved many bikes and is where Max (Cody Mackie) chases and stops us. We did it in one take of filming, which director George Miller was very happy with. I was very proud of our specialist motorcycle team as we did many one takes throughout the filming, which is fairly unusual”. 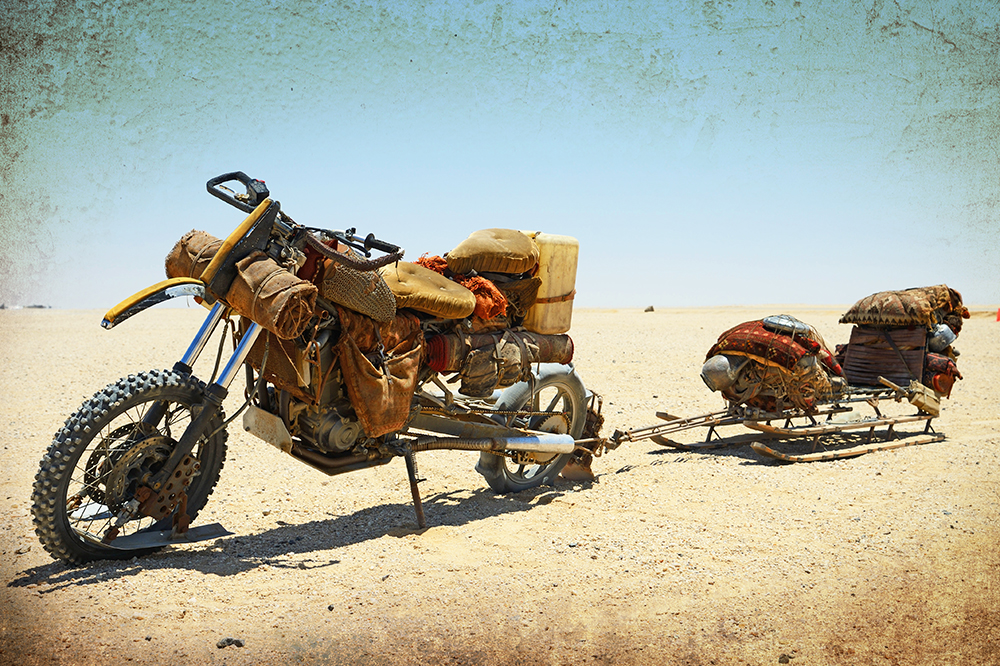 “It wouldn’t be hard for Mad Max fans to make replicas of these Rock Rider Yamaha YZ450s. They were fitted with Supercross suspension settings to handle the jumps over the War Rig. The seats were replaced with rubber replicas of the steel items they first came out with.

“All these bikes were made to look as though they were built from bits and pieces, but are actually fairly standard. They were the most fun to ride as they were the best jumpers, but they were also the most practical. To make a replica, all you need to do is get the colour off a dirt bike and add on some weird stuff. 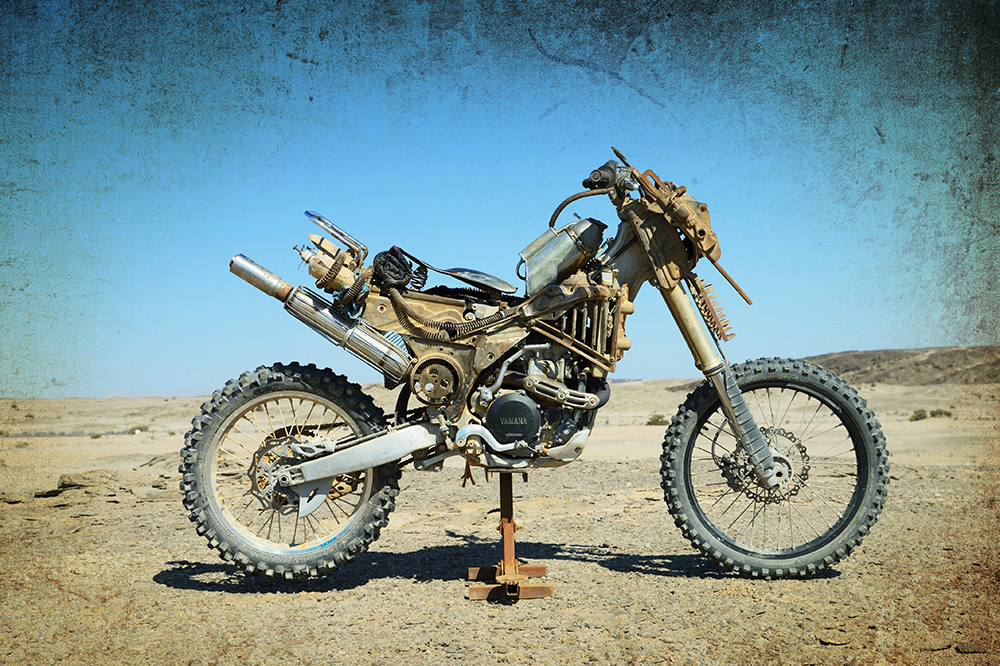 “If you’re going to head off into a desert salt pan in search of a better life, you could do worse than choose this outfit for the job. It’s based on a Royal Enfield single and the retro sidecar suits the bashed-up look of Fury Road. It doesn’t have a starring role, but is integral to the scenes involving the nomadic female desert biker tribe called The Vuvalini.” 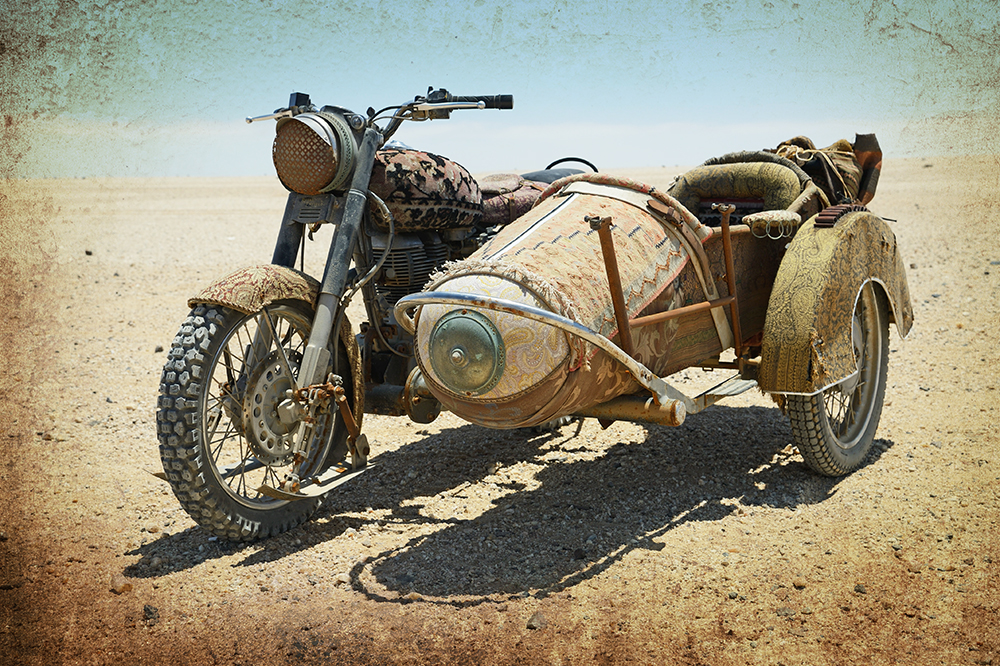 “A lot of effort is expended during the making of a movie that never makes it to the big screen. This Gold Wing is an example. I love the look of this loaded-up dresser – but none of us wanted to ride it in the sand. It was built as one of the female biker tribe’s house on wheels, but the extra weight made it the hardest to ride in the sand.

“It has an old-school Dunlop knobby on the 18-inch front wheel and the rear was a giant 16-inch. After watching the movie I haven’t see the Gold Wing yet, but it might be parked up with the other bikes. I’ll have to watch it again on slow-mo.” 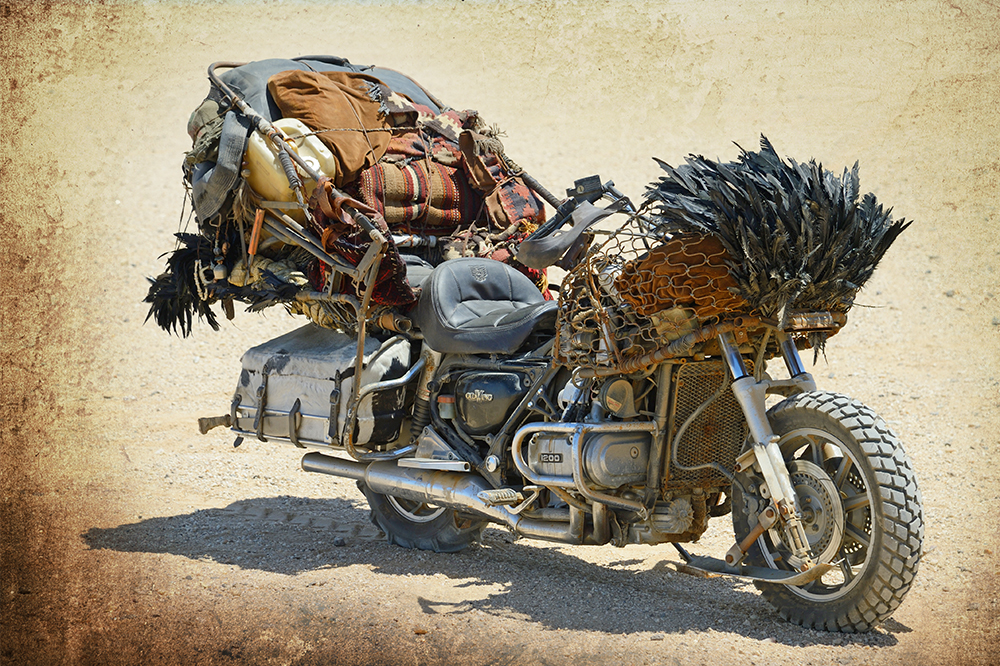 “There were two Gas Gas trials bikes on set with one as a hero bike and one a spare. They were standard, with very little dressing, and certainly the easiest to ride in the steep hills and the rocks, as you can see in the film when the convoy comes through the mountain pass.

“The Gas Gas is in the scene where the Rock Rider slides under the War Rig and grabs the legs of Charlize (actually her stunt double Dayna Grant) as she is trying to escape up a hatch under the tanker.

“New Zealander Dayna’s been in the stunt business for over 20 years, starting with Xena Warrior Princess and Hercules.” 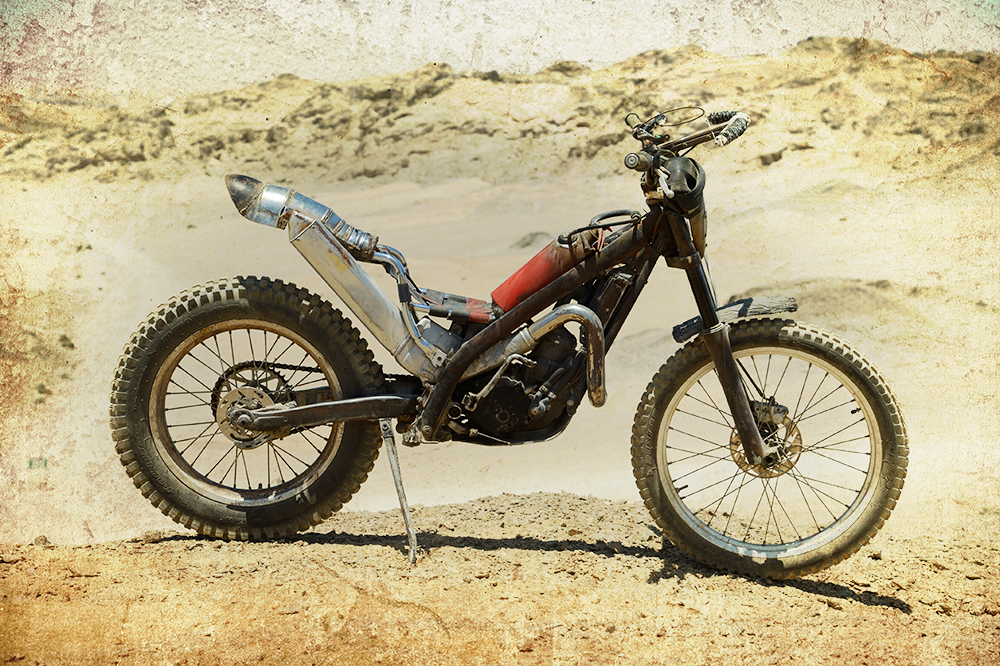 “This bike was a  favourite with  riders and crew. With a straight-through exhaust it sounded better than any of the cars and trucks at 14,000rpm, which made chief mechanic Bromley very happy.

It was great fun to ride when the conditions were smooth. We called this the number-plate bike as it had a rough tin fairing covering the engine.

“Some of the R1s also had horse saddles for seats, which was a clever customising idea. I also liked the bare bones R1 that had a saddle seat.

However, this number-plate R1 is seen probably the most in the movie. It was used in all the group chase shots.” 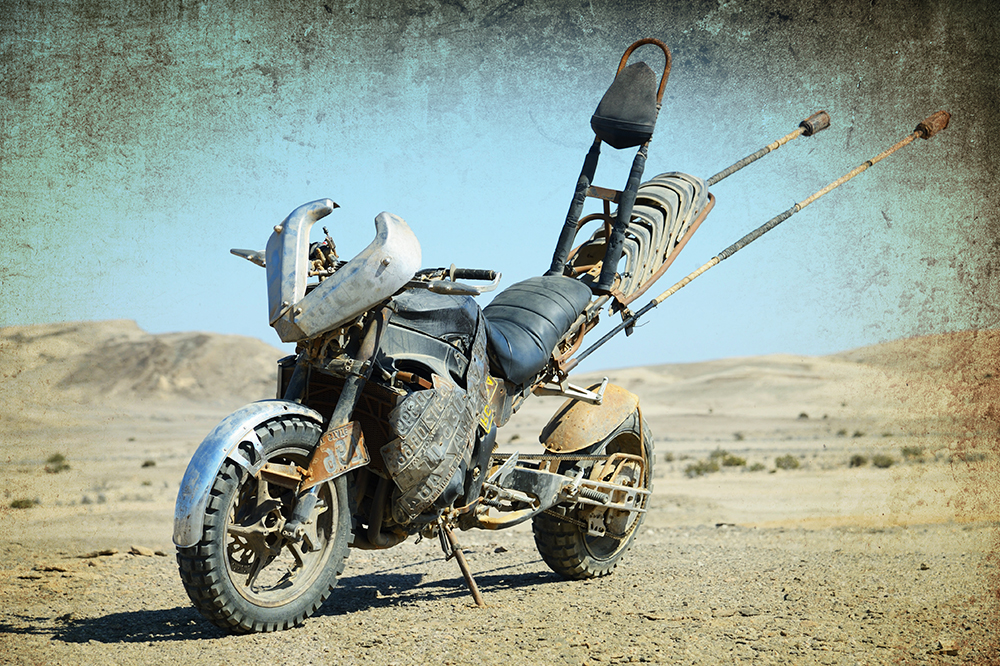 “While we all loved the Bare Bones YZ450, this R1 was very trick with its horse-saddle seat.

Loaded up with survival gear, including the nose bag, it really looks the part of a Mad Max motorcycle. We put a lot of effort into getting all the bikes to work with such long swingarms.

“I took the first of a particular type of bike back to the Gold Coast to test.

“Linkages often got bent in testing and we had to strengthen things up and revalve shocks, etc. These bikes weren’t show ponies. They did the hard yards during filming.” 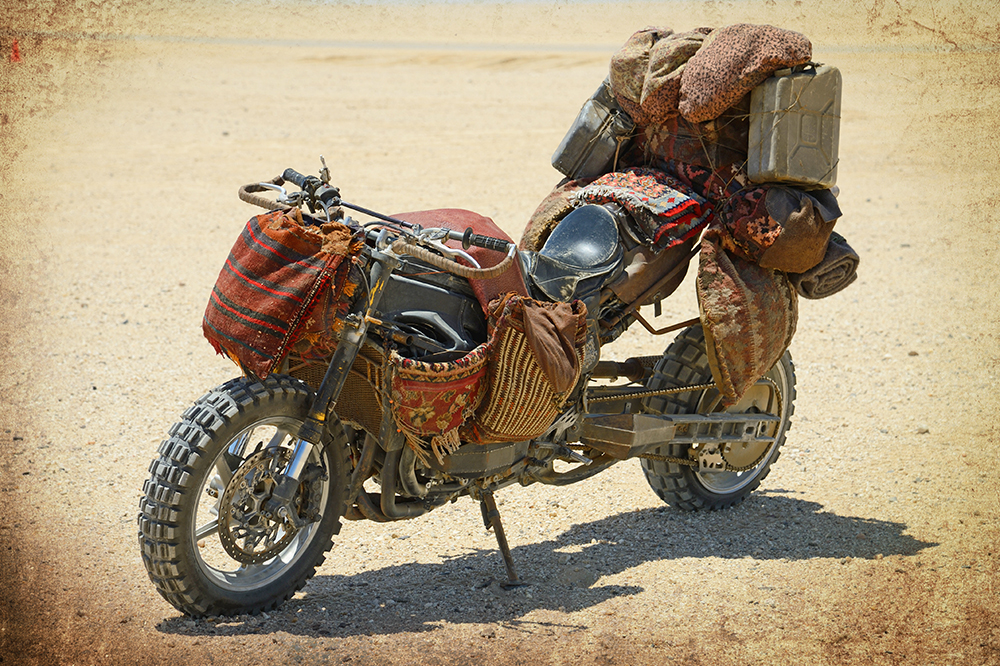