In a time when having the courage for nonconformity paid off, French-based ELF produced a series of eccentric yet competitive 500cc GP machines. This is the last of the line

The ultimate expression of the ELF two-wheeled design philosophy was the ELF5 (in turn a development of the unsuccessful ELF4), which carried Ron Haslam to 11th place in the 1988 500cc World Championship, with two seventh places in Spa and Brno his best race results of the year. To the extent that he did finish in the final points table above Randy Mamola (whose Cagiva had the handicap of Pirelli tyres) and Patrick Igoa on the 1987 factory Yamaha V4, ELF might rightly claim its purpose had been fulfilled, in proving that its alternative motorcycle design – fitted with 1987 Honda NSR500 V4 engines – was capable of matching its conventionally-designed factory rivals.

Just how much of this was due to Ron Haslam’s brave and determined riding, we’ll never know, but the fact Ron suffered from a stomach ulcer during the vital middle part of the grand prix season made his results – and those of the ELF – even more praiseworthy.

Having ridden most of the previous ELF designs at one time or another, I was eager to sample the last in the line, especially since I’d previously had the chance to test Wayne Gardner’s title-winning 1987 NSR500, fitted with the same engine as the ELF5, but of course using a more conventional chassis. The fond farewell to grand prix motorcycle racing at the Paul Ricard Circuit at the end of the 1988 season provided that opportunity – made all the more worthwhile by being able to ride alongside Ron Haslam, the man responsible for successfully taking the French team grand prix racing during the previous three seasons. 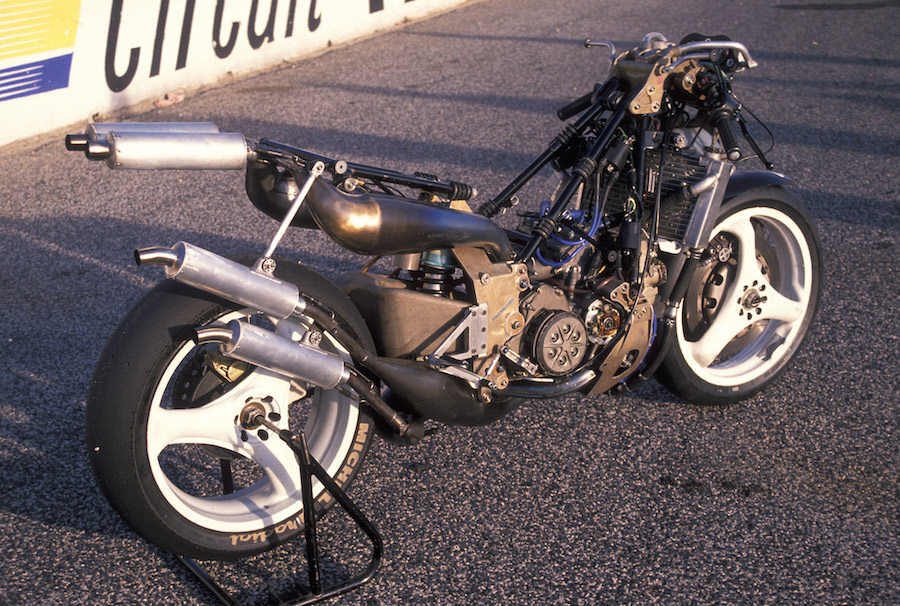 Minimalist chassis design is evident once the ELF5 gets ‘naked’ 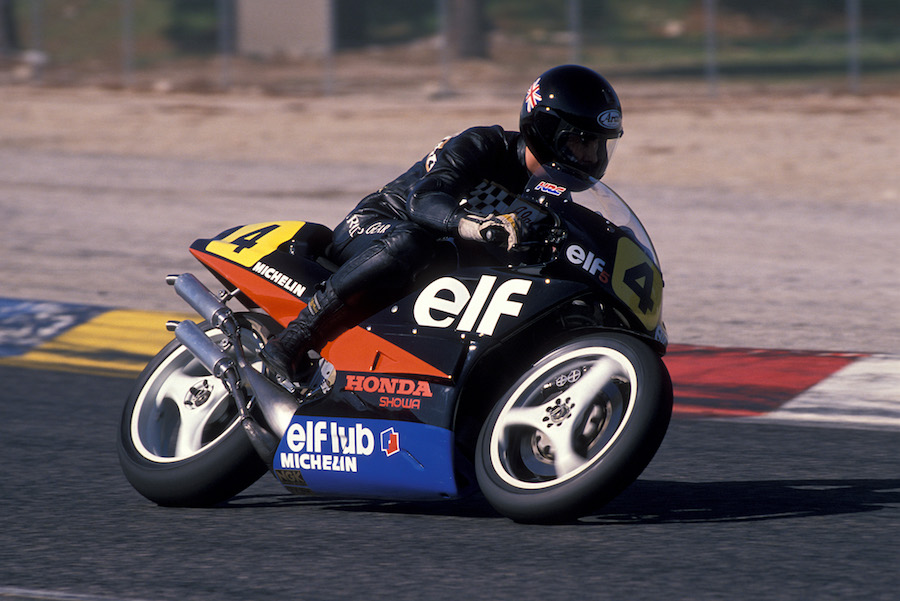 The ELF bikes fell into two broad types; the de Cortanze-designed line, up to and including the ELF2 with twin parallel front swingarms, and the MacPherson strut-based series from the ELF3 onwards, inspired by team manager Serge Rosset and designed by Dan Trema (who actually made all the drawings for every ELF ever built, even de Cortanze’s early prototypes).

The ELF5 was therefore based on the NS500-powered ELF3, with a separate chassis, a single horizontal front swingarm and a vertical strut with twin articulated triangles incorporating the single front suspension unit (on the ELF5) specially-made by Showa.

Rosset termed this front-end design the ‘VGC System’ – Variation Géometrique Controlée  or controlled geometric variation – and while the alloy chassis was vestigial and the front upright relatively small on the ELF3 on which the system was first introduced, the increased power of the four-cylinder NSR500 engine dictated a considerable increase in sectional area on the ELF4, which increased weight to an unacceptable 129kg, 10kg more than the conventional 1987 Honda NSR500. So apart from the other problems of braking and handling encountered with the ELF4, the main objective in designing the 1988 ELF5 was to reduce the weight substantially. The bike I tested at Ricard now weighed 118kg with water/oil but no fuel, about the same as a standard NSR500, achieved thanks to many small changes and one big one: the use of cast magnesium for most of the chassis and suspension components, even the front-end’s articulated triangles.

It also dictated the use of the 1987 NSR500 engine for the ’88 season, rather than the newer, more powerful version which Honda freely offered. The lead times around the mag castings forced the team to work around the engines they already had, rather the ones that would become available just before the start of the season. It’s what needed to happen if they wanted to be in a position to contest all the races in what was already sure to be the ELF project’s final grand prix season. And it means the ELF5’s true worth will always remain a mystery. 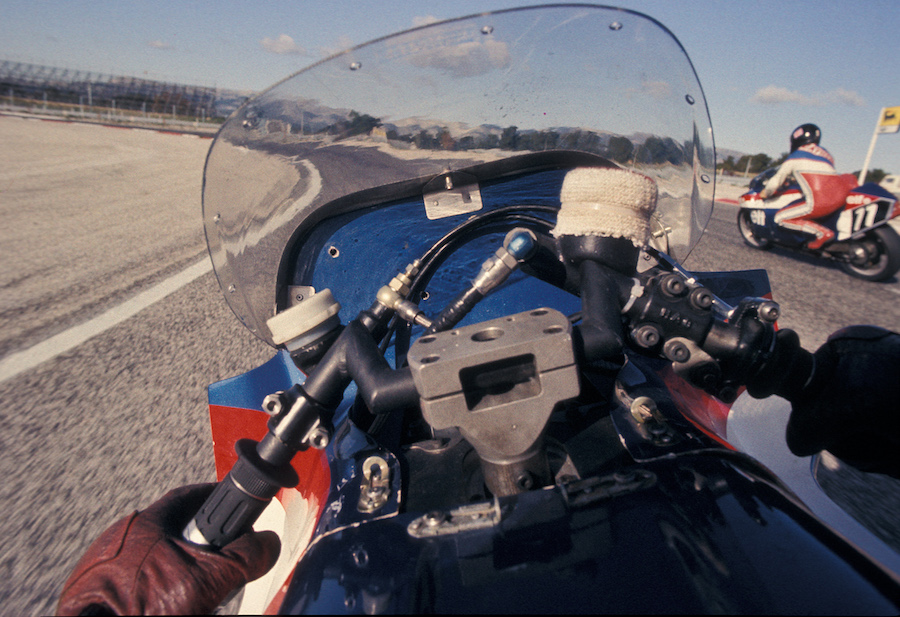 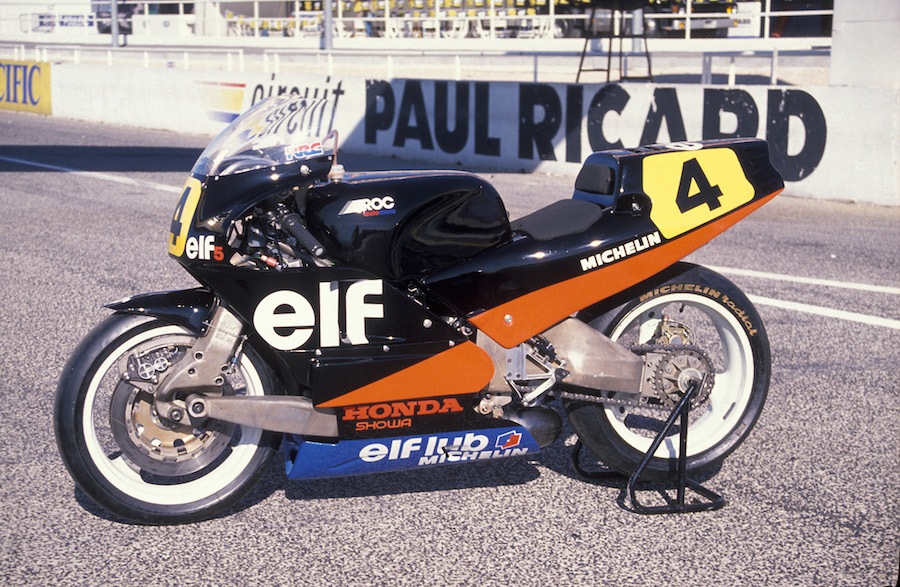 Built around the same 112-degree, single-crank crankcase, reed-valve V4 NSR motor that carried Wayne Gardner to the 1987 world title, the ELF5 was as different as could be from its Honda stablemate. For starters, the riding position was more extreme than the NSR’s, with the chin of your helmet practically rubbing the big magnesium casting comprising the steering head. According to Ron Haslam, this evolved from the ELF5’s predecessors:

“On the ELF3, we had a traction problem even though it steered well,” he explained. “It spun the rear wheel too easily in turns, but on the ELF4 they went too far in the other direction, and that had a bit of a steering problem because the weight was in the wrong place.

“So on the ELF5, we tried to balance it out and just about succeeded, though it meant moving the riding position further forward at the start of the season to get more weight on the front wheel.” Read the full story in AMCN Magazine Vol 68 No 09