Just like their riders, adventure bikes come in all shapes and sizes, from barnstorming behemoths made famous by the likes of Charley and Ewan to pint-size entry-level offerings such as the BMW G310GS and Kawasaki Versys X-300.

But which type of bike is the ‘just right’ ADV machine? That’s the $64,000 question and one that promotes endless banter in the bars popular with ADV riders, from the edge of the Simpson Desert to the top of the Victorian High Country. You will just never get everyone to agree. Given adventure bikes have been flavour of the month with manufacturers in recent years, when one pops up that comes from a little out of left field, it’s sure to have the spotlight shone on it. And that was precisely the case when the AJP PR7 was first unveiled in late 2014 at the Intermot Show in Germany.

Now, if you find yourself asking, ‘A-J-who? P-R- what?’, don’t feel bad, because you wouldn’t be the only one.

AJP is a Portuguese brand, best known for producing a range of small-capacity four-stroke off-road bikes sold in various markets around the world, including Australia. The PR7, however, breaks new ground by being a big-bore thumper with a clearly rally-inspired design brief, aimed fair and square at off-road-biased adventure riders. Yes, many an Aussie ADVer’s ears just pricked up. The best part of three years after that show preview, the PR7 is now a production reality and recently went on sale in Australia via a fledgling network of dealers under the umbrella of Gold Coast-based distributor AJP Australia.

In an era when many show bikes ultimately end up being dumbed down or priced down by the time they reach production, the PR7 has remained true to brief and, as it now sits on showroom floors, remains very much a rally-inspired, lightweight and purposeful single-cylinder adventure machine. In fact, the PR7 production model has arguably been improved over the show bike because the original 660cc Minarelli powerplant has been replaced by a lighter and more powerful 600cc engine from SWM. This motor, which also powers the SWM Superdual and RS650 trail bike, is a direct descendent of the much-loved Husqvarna TE630 motor.

The fuel-injected DOHC single is fed by a 45mm throttle body, is equipped with a balancer shaft and drives through a six-speed gearbox with hydraulic clutch actuation. AJP claims the engine, which is Euro 4 compliant and LAMS approved, puts out 36.5kW. While the engine has been changed and the Marzocchi fork and Öhlins shock have been replaced by ZF Sachs components, the PR7 is otherwise very similar to the 2014 show bike.

AJP’s trademark hybrid twin-spar steel and aluminium frame is mated with another trademark feature of the Portuguese brand, an under-seat fuel cell. The tank is made by Acerbis and carries 17 litres of go-juice, with the lockable filler cap moved to a more practical location at the front of the seat rather than at the rear, as it was on the show bike. 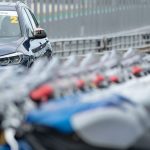