A little guy with a big heart won the 1984 Paris-Dakar Rally on an enormous motorcycle. Jump on

The Bootleg Beatles. Experience Hendrix. The Counterfeit Stones. When you can’t see your favourite band live, there’s always a tribute band that can conjure up a taste of the old magic. If you can’t ride Hailwood’s 1978 TT winning Ducati or Cal Rayborn’s Harley XRTT, you could always build yourself a replica.

Penthouse logos on a massive fuel tank, Antar stickers on the front mudguard and oval race plates carrying number 101. Remind you of anything? How about that famous victory by Gaston Rahier in the 1984 Paris-Dakar?

Will Corry pats the suede and leather-covered seat and says, “it’s a tribute bike.” It would take a master forger to make a faithful replica of Rahier’s GS, which was one of three built by ISDT legend Herbert Schek in Paris. The main frame section might look like it came from a stock Series 7 RS BMW, but it was fabricated from oval section chrome-moly tubing (much of it with 3mm-thick walls) and heat-treated. To improve the handling in desert conditions, the rake was reduced from 28 to 27 degrees. Schek used a stronger double-sided swingarm controlled by twin Öhlins shocks. The left swingarm – the weaker one – was reinforced with a steel plate along most of its length. Measuring 505mm long, the Schek swingarm was 100mm longer than the 405mm single-sided swingarm of the monoshock R80G/S.

Rear-wheel travel was 280mm while the Marzocchi fork, with its 42mm stanchions, gave a generous 310mm of movement. Although the rear stopper was basically a stock 200mm drum, up front was a single exotic Brembo 260mm plasma-coated alloy floating disc. The front hub came from a KTM, with both rims by Akront. The knobby Michelin Desert tyres, with a 90/90-21 front and a 140/90-17 rear, had tubes filled with anti-puncture foam. Besides the main fuel tank, which held 45 litres, there was an eight-litre reserve tank under the seat. Most replicas have alloy tanks but the real ones were made from light and incredibly strong Kevlar. The main tank was divided into two separate compartments with individual filler caps so that not all the fuel would be lost if one side punctured in a crash. Internal baffles reduced the effect on handling caused by sloshing, especially during hard braking. The sump carried 2.5 litres of lubricant – not a lot considering the conditions – while the oil cooler could quickly be isolated from the feed and return pipes if punctured. 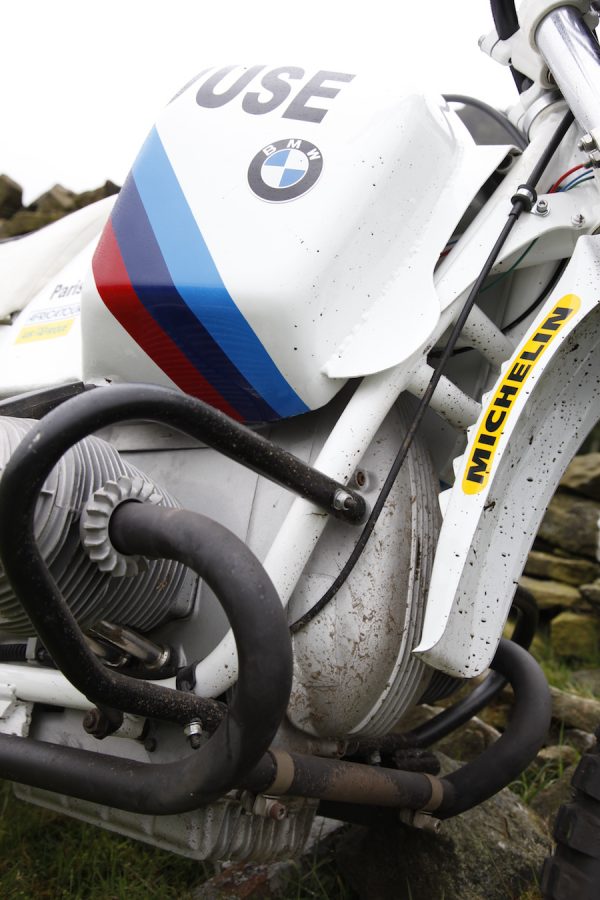 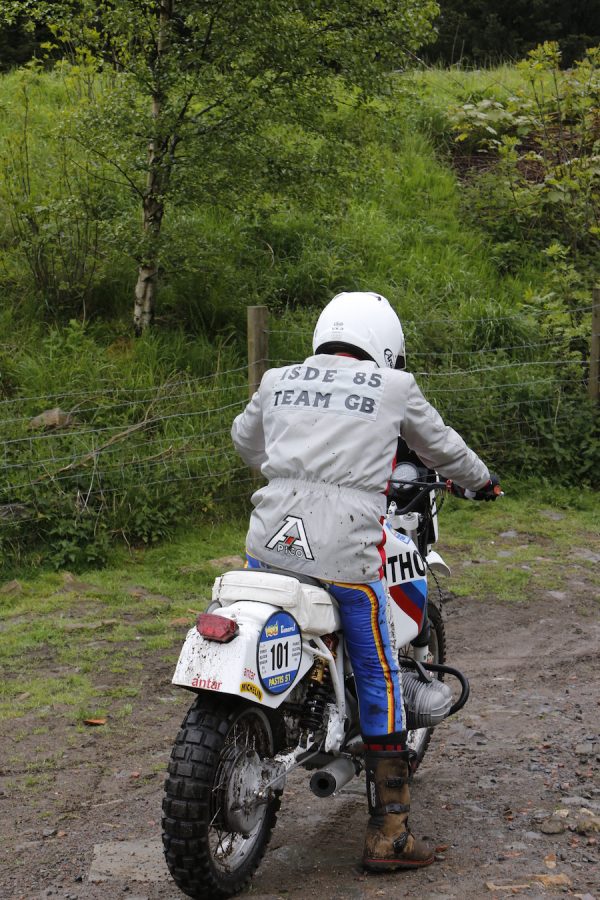 Ignition was by Bosch electronic discharge, with a 140w generator and a compact NiCad battery. The electric starter was operated by a button on the alloy engine cover that hides the air filter. A kickstarter provided a backup. Instrumentation was basic – only a speedometer and an oil temperature gauge with warning light, with a simple illuminated route holder consisting of two rollers in a clear-fronted box. The route paper could be wound on without the rider taking his left hand from the bar.

These were big bikes – 2350mm long, with a wheelbase of 1660mm and a maximum width of 870mm. While a stock R100 engine is 760mm wide, the Schek engine measures only 716mmm thanks in part to special pistons with the gudgeon pin closer to the crown. The seat height was an astounding 1030mm. And they were heavy, weighing 175kg dry. In running order, with oil and fully fueled and carrying tools in a leather pouch on top of the main tank, spares and safety equipment, that climbed to 250kg.

Suzuki factory rider Gaston Rahier won the 125cc World Motocross Championship in three consecutive years between 1975 and 1977. His motocross career came to an end in 1982 when he almost lost his arm in a crash, but the Belgian ace proved how tough he was by entering the 1983 Paris-Dakar on a 980cc G/S. BMW works riders were traditionally giants – Frenchman Hubert Auriol stood 193cm tall in his socks. But Rahier stood no more than 165cm and was nicknamed the Belgian Dwarf. There was no way that he could put a boot on the ground when he was on his BMW, and his technique to get away was to stand next to the bike, select first gear and then set off while standing on the left cylinder and leaping on board. Rahier was leading the field when mechanical failure ended his hopes and the race was won for the second time by Auriol on a Schek-built BMW. Rahier was a natural for the 1984 BMW factory team and rode bike 101, with teammates Auriol (100) and Frenchman Raymond Loizeaux (102). By this time Schek was 51 years old, but he still entered as a privateer on a Schek R80G/S. The machine scrutineers marked the frames and engines with yellow paint, and scratched in the rider number when it was dry. The race started on 1 January at the Place de la Concorde, Paris in front of 30,000 spectators and finished 12,000km away in Dakar, Senegal on 20 January. Besides the 114 motorcycles there were 313 cars and trucks. And no rest days.

Works bikes from Honda, Yamaha, Suzuki and KTM were lighter and had the advantage on muddy ground, but on the dry African terrain the powerful BMWs surged to the front. Auriol and Rahier fought for the lead whether they were contending with snow in the mountains or the searing heat of the desert, at the finish it was the Belgian who finished first with a time of 54h19m56s. He had beaten Auriol by  over 20 minutes. Loizeaux came home fifth almost three hours later. Schek finished in 21st place with a time of 72h48m30s to win the Marathon class, where riders compete without factory support.

Those massive fuel tanks had proved to be useful – in the desert the factory BMWs sucked a litre every 10km while for the rest of the route a litre lasted 12km. Oil consumption was only 0.30 litres every 100km, and the bikes got one oil change at the half-way mark. We are a long way from Paris and even further from Dakar, but we’ve found the ideal man to put Will Corry’s tribute bike through its paces. Yrjö ‘Vesty’ Vesterinen got his first factory ride in 1974 when he joined Bultaco as a very keen 21 year old. He won the World Trials Championship three years running between 1976-78, and in 1984 founded Apico International, the UK’s leading off-road parts and clothing distributor for trials, motocross, supermoto and enduro riders. In 1985 he began sponsoring Gaston Rahier.

“The first time that I met him was in Belgium at the Bultaco importer’s place,” says Vesty. “Gaston also had a motorcycle shop, and we got on really well – he was very sociable. When I started my clothing business, he asked if I could make him some cool stuff to wear. Now most top riders expect a lot of money to wear branded clothing, but when I asked him how much he wanted he said, ‘just give me something’. He knew money was tight in a new business and accepted £500. I’m sure he was paid a lot more by BMW and Marlborough!” 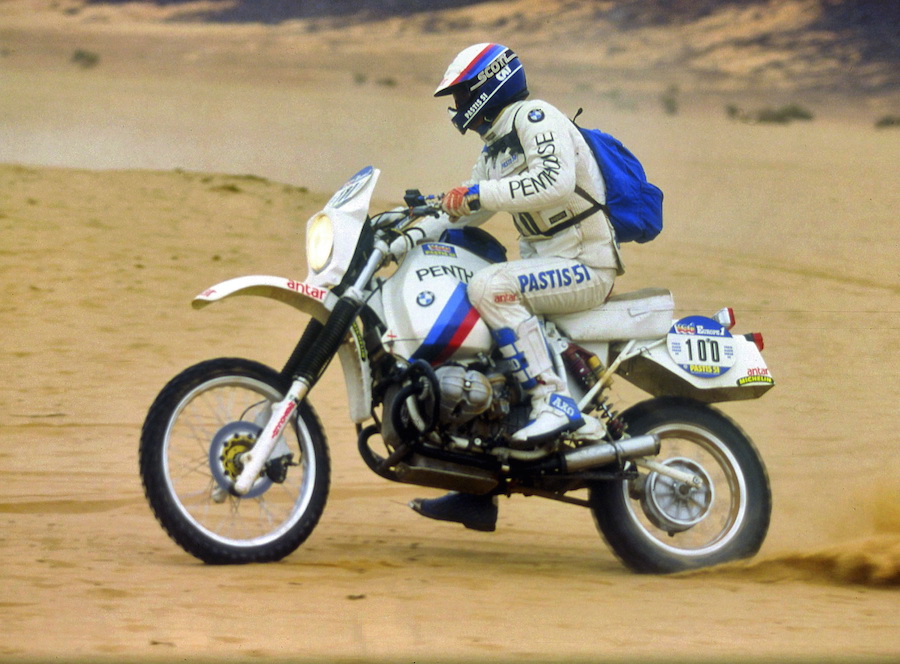 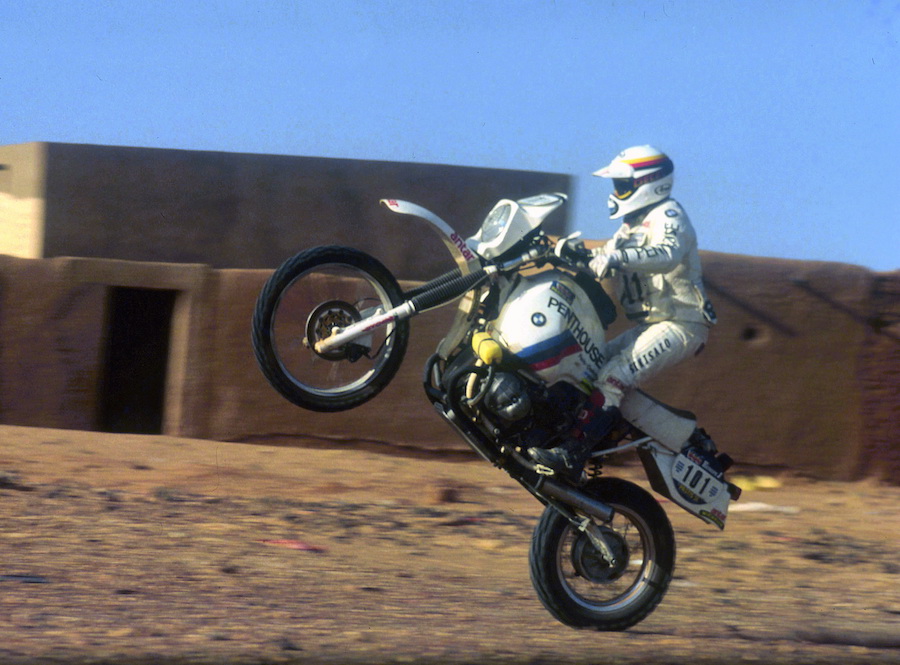 Gaston Rahier 1984 – But once he did, it was clear the Belgian ace was in complete control

Vesty has brought us to the rugged hills outside the Lancashire industrial town where he lives to put the tribute bike through its paces. “Rahier’s GS was made for charging up sand dunes, not over loose rocks and across slippery wet grass,” says the famous Finn. And I knew that the seat would be high, but I never expected it to be this high, I’m 177cm but I had trouble getting a leg over the saddle!”

Vesty took the bike for a blast along a gravel track leading to a farm. “The bike seemed very stable when I wound it on,” he says. “Even when I was spinning the back wheel the back end wasn’t fishtailing. I’d imagine that it would be in its element on fast dirt roads… or desert sand. At low speeds I can feel the torque reaction of the engine trying to pull the bike to the right. I haven’t ridden a BMW for a long time and I had forgotten how powerful that force is.”

He was surprised by the long-travel suspension, saying, “it is very soft, and the bike is so heavy even without a full tank of petrol that I thought I wouldn’t have been able to hold it if the front end started to slide on slippery rocks. My biggest fear was that big lump of a BMW landing on me and breaking my leg like a matchstick. But the suspension soaked up the bumps very nicely, although the shocks would need to be pressurised correctly for high-speed riding.

“I can’t begin to understand how someone as small as Gaston was able to ride his GS. Of course, as a three-time world champion motocross rider, he was certainly fit. But he was racing 125cc Suzuki strokers, not a great big Boxer loaded with over 50 litres of fuel. It was a massive achievement for him to win the Paris-Dakar. And he did it again in 1985!”

Ask if he would have liked to take up the Paris-Dakar challenge in 1984 and the Finn laughs. “No, I’m a trials rider. To me, the PD was a torture. It wasn’t just about going fast and enjoying yourself. There was no enjoyment – it was the man against the machine against the elements in the most brutal way possible. I do admire the riders, but no. It wouldn’t have been my cup of tea…”