We both lay splayed on the ground and in shock at the sight of the huge hunk of sunset-orange Russian steel towering and teetering above us, ever so slightly snagged on a tree. As we braced for the impact, my brain started looping Matt from Ural’s parting words when he dropped off the bike a few days prior: “In two-wheel drive you’ll have to give it a bit more throttle because of the extra linkages.”

I couldn’t believe it. Did I give it too much? How did this happen? Surely you can’t flip a Ural!

A bit more throttle followed by a mild clutch dump will definitely flip the brand new right-hand-ride, two-wheel-drive Gear Up model from Ural. A little rock ledge, the new grippy off-road Heidenaus on some Sydney sandstone, Ollie from Australasian Dirt Bike in the chair and 40kg of sand bags in the boot will do it. 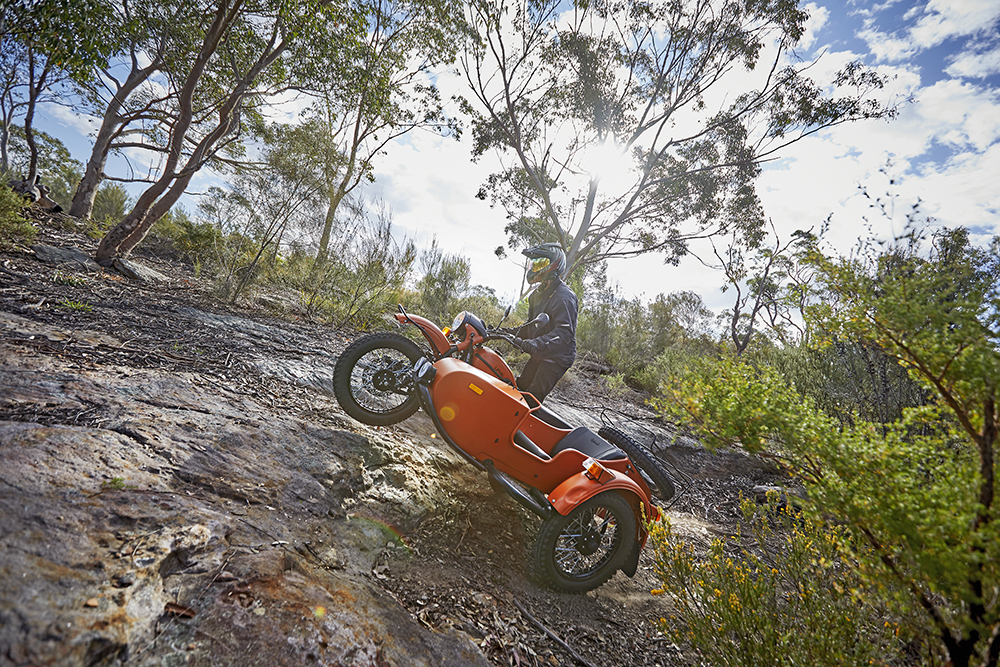 We’ve had the single-wheel drive forever in Australia and I have certainly romanticised going deep down the rabbit hole with the 2WD left-hand-ride version for many many years now.

Who doesn’t want to emulate those crazy Russian test videos where they cross impossible rivers and go extreme, off-the-charts adventure riding?! Ahem, I certainly do. 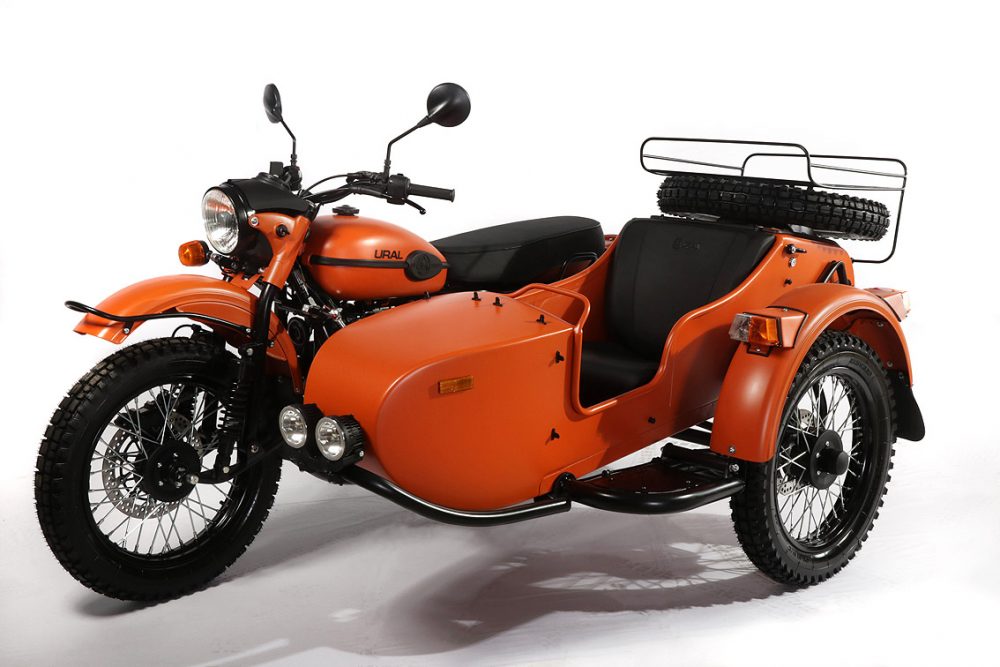 After clocking up many thousands of Ural kilometres, I’d been mildly stuck; on hills, on rocks, in mud, in sand and all without a winch. And because Urals are hard to push, you soon learn to avoid those situations, but that leads to that dreaded feeling of looking down a track and deciding it’s too risky. I was fully aware of the benefits of two-wheel drive and also acutely cognisant that two-wheel drive will likely get you stuck further up the creek without a, well, winch.

I met Ollie and Mitch from ADB at Wheeney Creek, north west of Sydney. That’s why I had 40 kilograms of weight in the – riding empty is way too scary on left handers. Eighty kilos is my preferred chair ballast; you can really hook into lefts with 80kg anchoring the flighty sidecar wheel that would otherwise upset your precious corner line. Lifting the chair wheel, at say 60 or 70km/h, you find yourself drifting wider and wider as you try and get it back down – not my idea of fun. 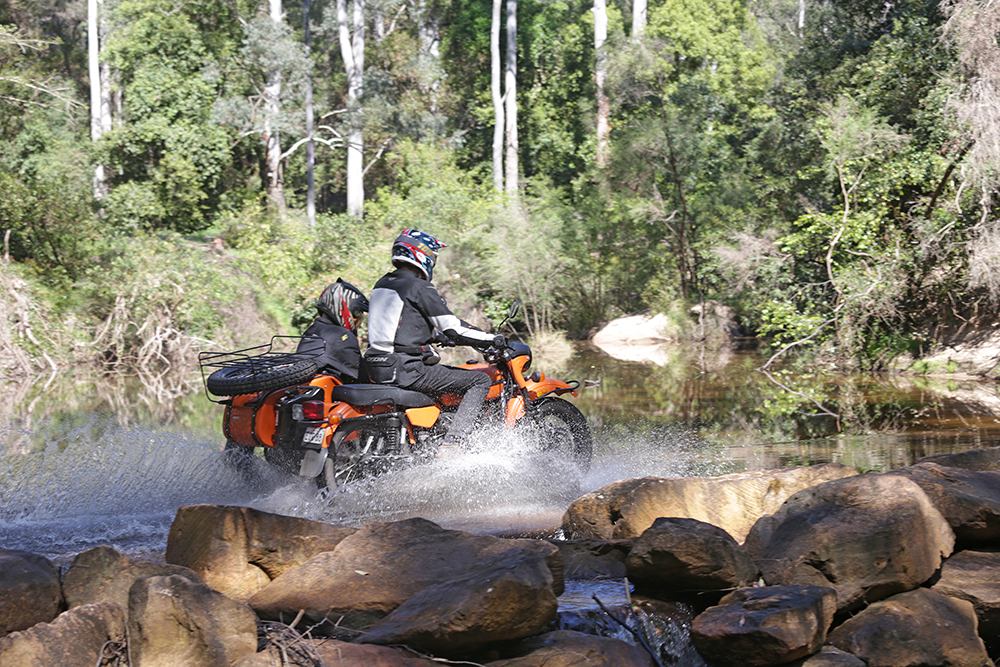 It had no problems through the creek, I buried it up to the rear axle in a sand drift, from which it escaped without effort, did some slides in the same the sand and fell off spectacularly – which is another thing I thought was impossible on a Ural.

We headed up the mountain to a popular 4WD trail to climb what we could, but it wasn’t too long before we realised that clearance is 99 percent of what makes light work of rock hopping. Oh, and wheel placement is hard when you’re used to life on two wheels. That third wheel is really easy to drop in the wrong spot, crashing the steel tube protecting the chair into the rock below. Ollie and I were running out of ability (or ground clearance) before the bike could prove itself. 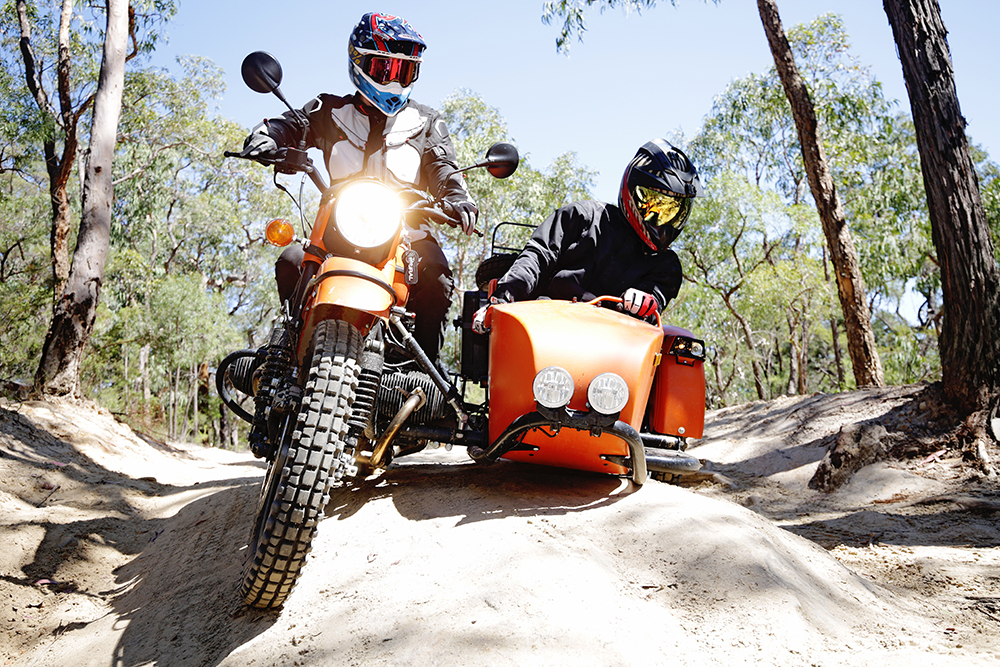 But when we started getting our lines right, the bike seemed to pull out of sticky situations too easily.

After deciding ledges weren’t the go, we headed back to the creek looking for something interesting along the way that won’t crunch the bike so much. So far we’d just scratched a few crash bars and hoped it might go unnoticed, or at least be an acceptable consequence of the rigorous test. We had a job to do after all. And the problem with mixing cameras and bikes is you’re always pushing it and flirting with the edge. And that’s why we ended up on our heads. 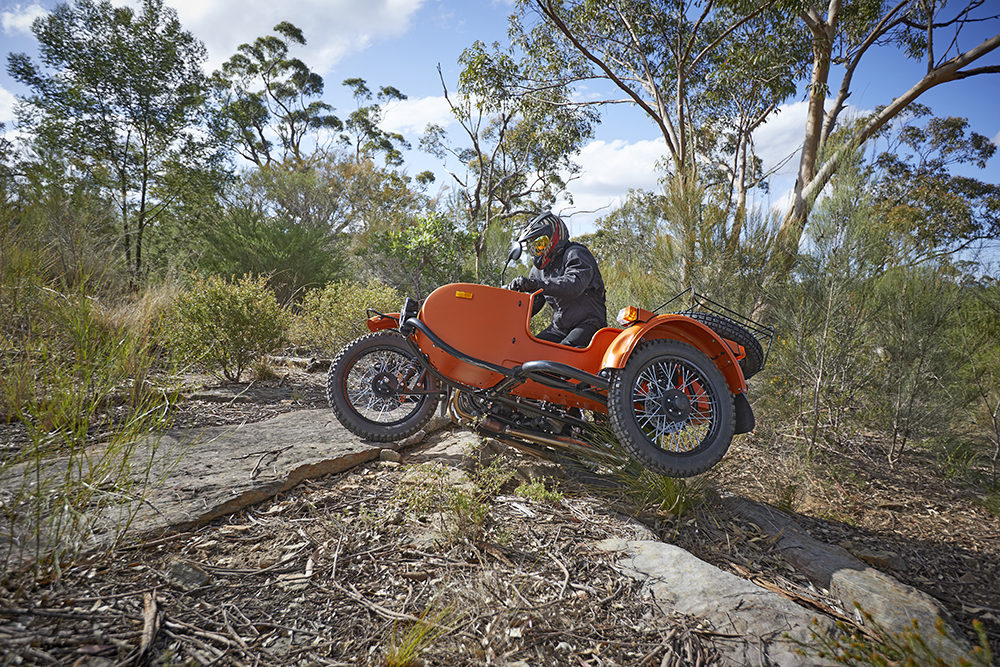 On the way home I was thinking about where we went wrong. Diving in head first wasn’t a great idea. We definitely should have built up to the tricky stuff and got used to how much the bike pulls out of situations and how much the extra linkage soaks up some power before hooking straight in. What is this two-wheel drive bike for anyway? Maybe not rock ledges and chewed-up 4WD trails. Charging in head first ended badly, but the Gear Up is definitely not a cruisey runabout, it’s something you’re having to consciously ride every second.

The input required is relentless and when you’re tired, like riding-the-tail-off-a-Ural-all-day tired, it’s uncompromising. It definitely gets easier once your body gets three-wheeled-ride fit, but it’s never like a regular two wheeled bike where you can find yourself wondering where the last 15 minutes of the ride went. 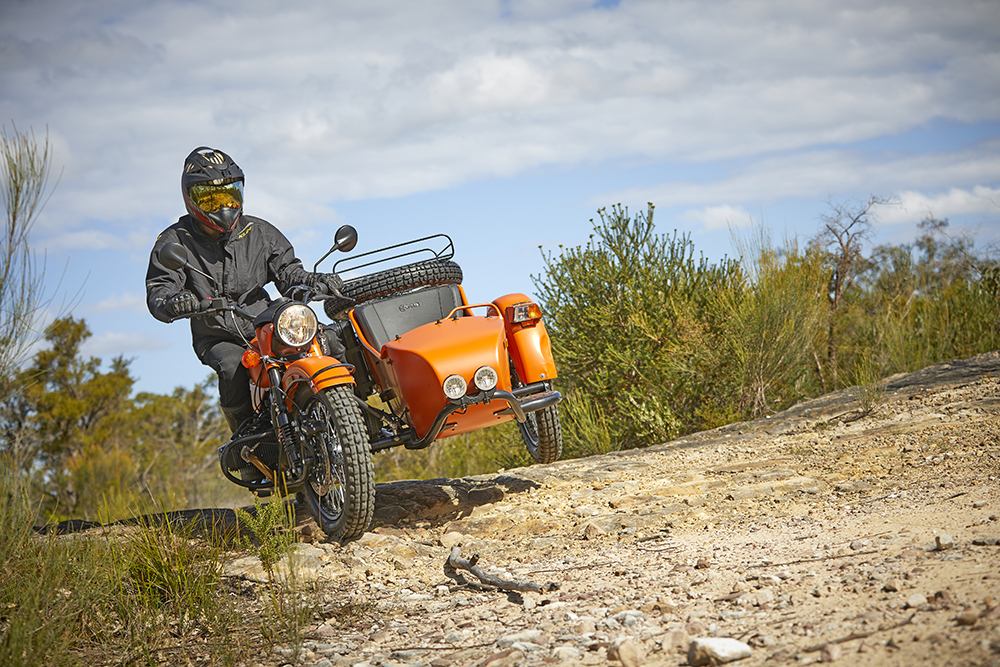 So I decided to try a few things. Use it like a daily; y’know, pick up the milk, pick up the kids from school, drop the kids to soccer training – I even rode to a bucks night half way across Sydney – somehow triggered a speed camera, all the normal stuff. My five-acre bush block needs a capable vehicle to move stuff around, duties normally carried out by an orange Husqvarna tractor mower and trailer – the Ural could almost replace it if I can figure out where to hang the blades.

I got stuck a few times on simple bush stuff and a quick flick of the two-wheel drive knob meant the bike was unstuck moments later. It does everything with ease and replaces a few vehicles in the process. It is a real Russian Army Knife in vehicular form and now it has the scissors. Let’s face it a pocket knife without scissors is a bit of a let down, we may not use them much, but with scissors they can be a life saver. The Gear Up’s 2WD is definitely its scissors! 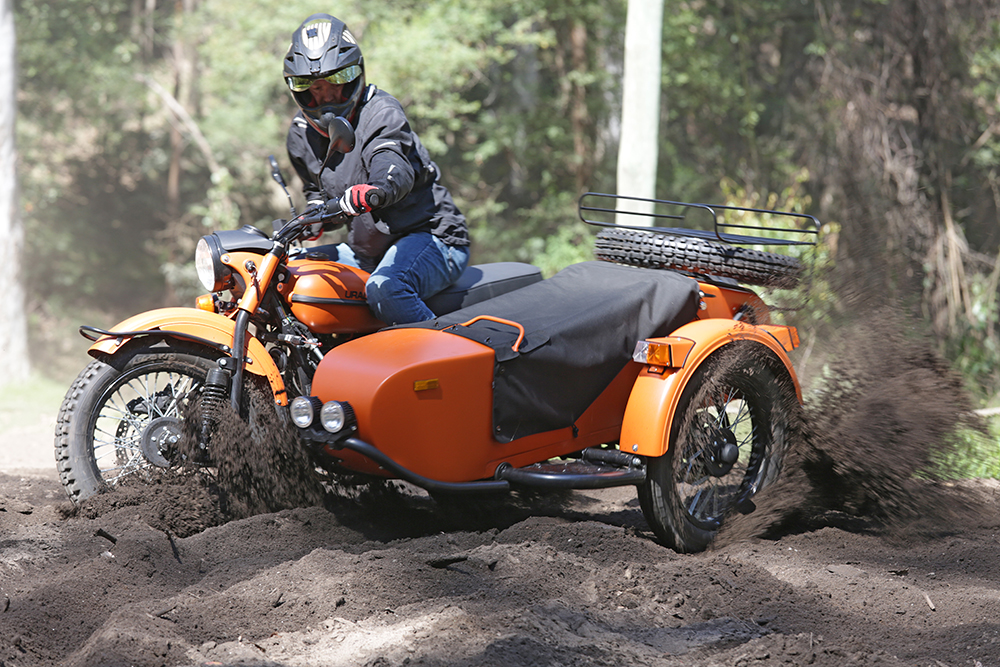 After a week in the life of a daily ride, the Ural was feeling very comfortable. I was mostly used to the head turning the thing caused everywhere I went. The local kids still waved with excitement as that crazy looking bike rode past again.

At a slower pace the bike was much easier to ride and less thinking was required to deal with the steering input. One thing I used constantly was the boot. What a great thing to have on a bike. The cam latch is a joy to use and locks as solid as any complicated pannier latch any other brand produces. Other stands outs are the handbrake lever on the ’bars and not having to deal with a sidestand. 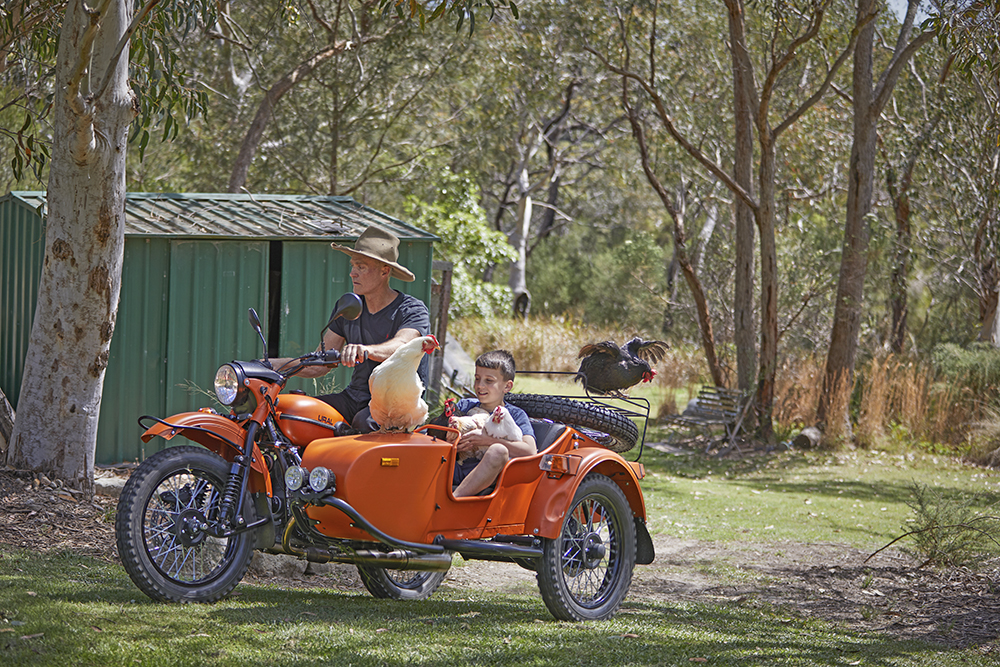 Flicking the lever and hopping off in a flash on any slope is still so much fun. A reverse gear is pretty fun to use and I can knock it in and out with my heel super quickly now, but it really requires boots. I could not operate it in runners.

The great thing about Americans being involved in the development of the Ural is the constant upgrades. This model has new throttle bodies and a host of other minor improvements while keeping the soul of the bike firmly intact. This is evident every time you change gears; the familiar clunk of a gearbox without synchromesh gears. I love that we are forced to experience the feeling through your body rather than just through the mind like a lot of the current crop of retro inspired bikes. I feel transported back in time on the Ural, yet the upgrades give me the confidence I’ll make it back home every time I venture out. 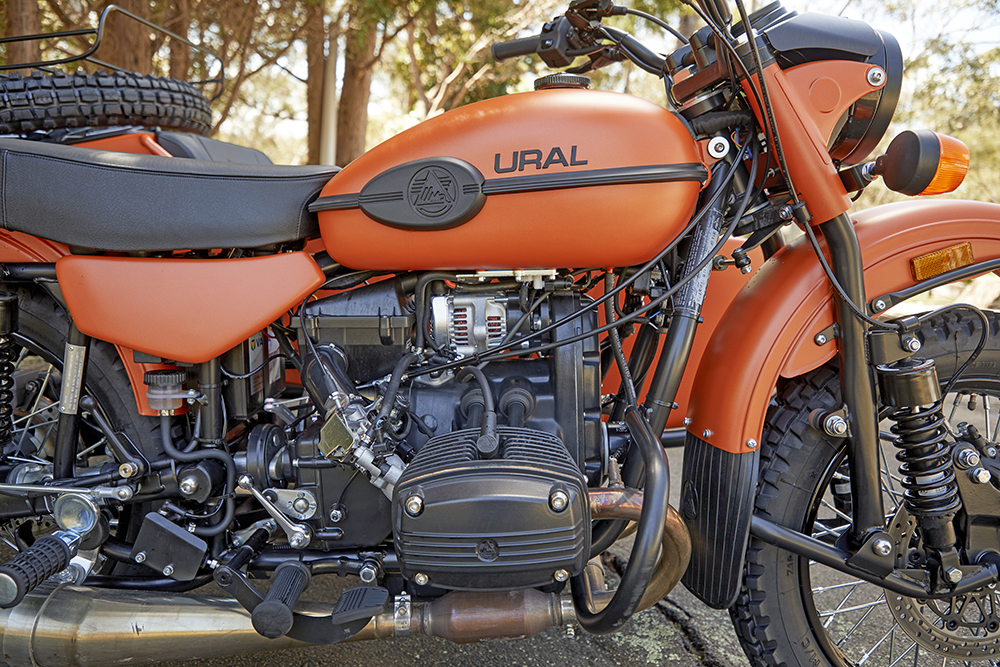 Having said that, I am not a fan of the random nature of the 2WD lever, often it is very difficult to engage. I’ve tried all the tricks, rolling forward, riding forward, engaging reverse, trying in neutral and in gear. When it’s tough to engage, the only way is to force it way more than I am comfortable doing. But it does engage and no clunks or anything else to indicate forcing is an issue. Then other times, it can engage so easily that I wonder if the rod has disconnected.

Unlike the gearbox, I can’t file this as a retro feature. My brain squirms a little every time I get stuck and need to engage 2WD wondering which engagement I’ll get each time. I hope this is just a one-off issue on the test bike, because 2WD needs to slip in without effort. The only other thing I’d have on my wishlist is a Dakar style up-swept muffler. The muffler is the main culprit when it comes to ground clearance issues. 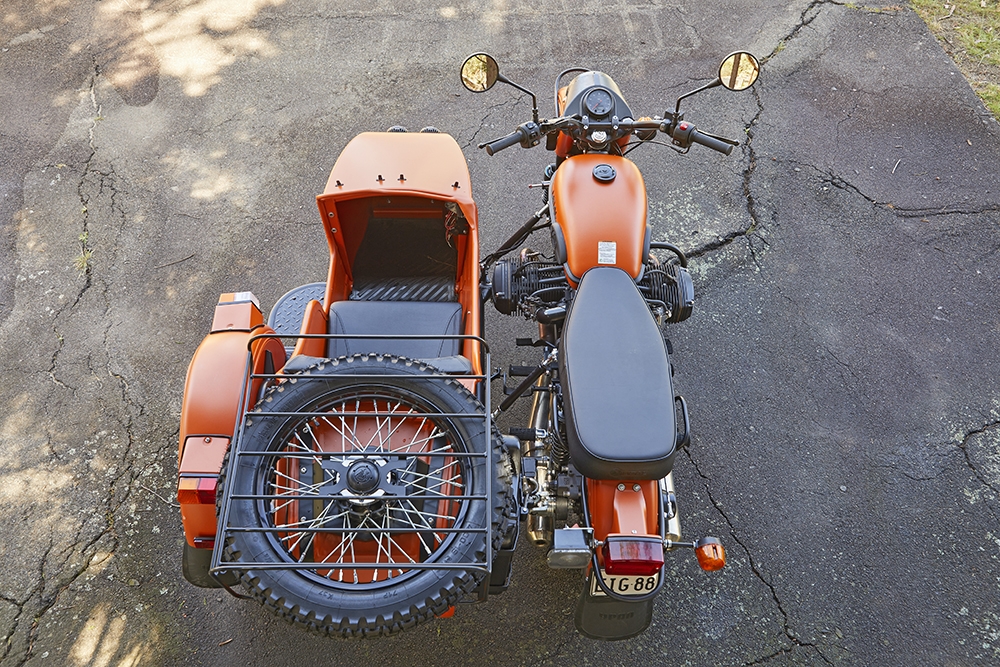 I scouted places to take that hero photo, that special spot to inspire that feeling that makes you want to get out of the virtual and into the real world and live. There is a spot I have used once before but it’s a shocker to get in and out of. There’s a lot of steep bush and dense trees to negotiate and the final rocky decent is at steep odd angles. Oh, and the small platform has several gaping fractures and is surrounded by four-metre high cliffs. Despite my Dad’s protesting, I decided with everyone’s help it’s worth a shot and it would really test out the quality of those scissors and my new two-wheel drive skills honed over a few weeks.

I gave myself a 15-minute break to get my head together and started the complicated descent to the rocky platform. With patience, time and a better understanding of how the bike works and reacts, we got it there and back out again. It is a credit to the bike for being predictable enough to put myself in one of the most dangerous positions of my life and to have the drive to get back out again. We were all surprised when it drove out like a monster truck and, after all the stressful planning and overthinking, was really an anti-climax. 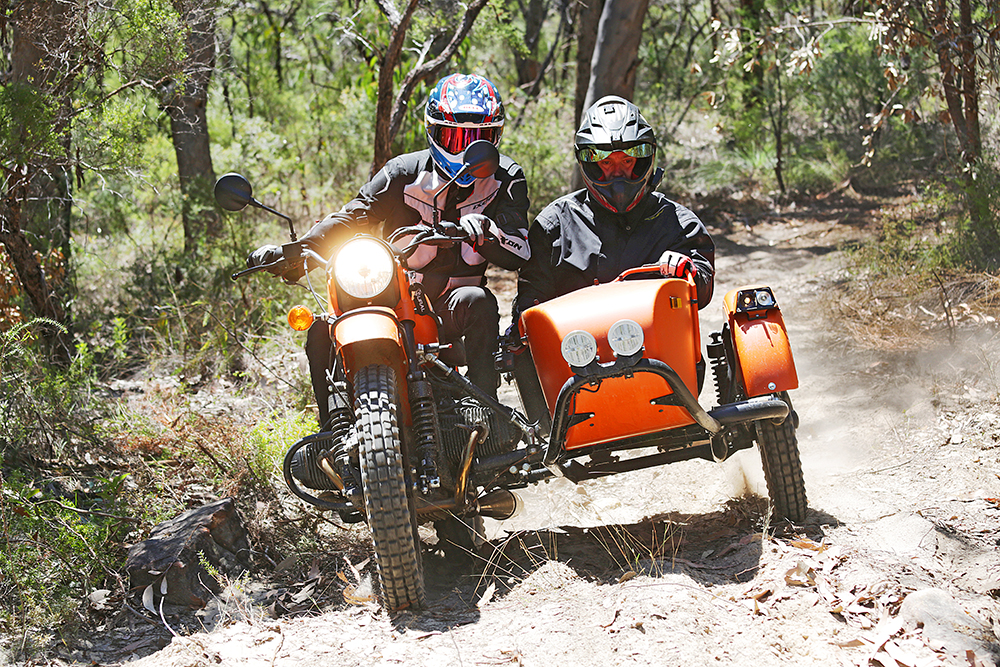 The Ural Gear Up 2WD seems so simple – an extra wheel to drive the bike and get you out of sticky situations. The reality is, as I initially thought, is it can cause its own awkward predicaments! There’s two stand-out things I took from my latest adventures on a three-wheeled Ural. I was constantly surprised at how capable the so-called retro machine is. And the other, despite riding two- and three-wheeled bikes for well over 40 years, just how much I have still to learn. 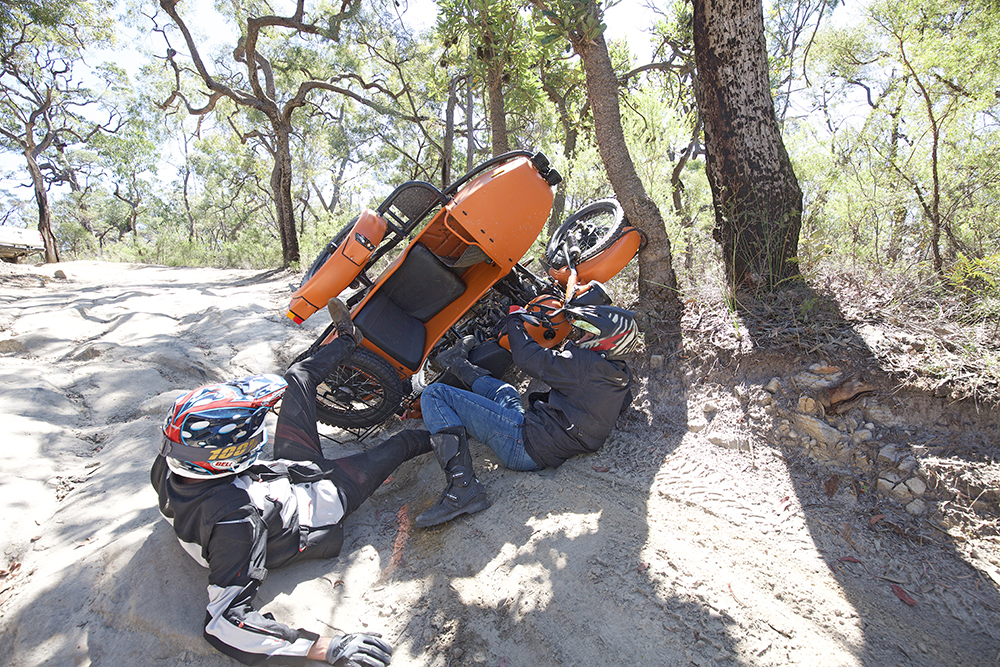