Suzuki has updated its affordable GSX-S1000 for 2022, but not to the level of its supernaked rivals. And that just very well may be the key to its success

The 2022 Suzuki GSX-S1000 is more of a tweak than a complete overhaul. The GSX-S1000’s engine, whose roots can be traced back to the almost legendary GSX-R1000 K5 (you can read about the K5 here), is now Euro-5 compliant, it revs an extra 1000rpm and, although quoted peak torque is down, Suzuki assures us the torque curve is smoother and fatter than previously.

Capacity, bore and stroke, compression are the same with new camshafts, camchain and valve springs, along with a new slipper clutch and exhaust the most significant changes. There’s also new electronics, new dash, up-and-down quickshifter as standard and conventional traction control with more refinement – not forgetting bold new looks.

That might not sound like a gigantic leap in development, and without any lean-sensitive rider aids, it is behind the competition in terms of technology, but it will be priced accordingly when Suzuki Australia unleash it early next year – the reduced level of technology will almost definitely mean a significant saving for you and me. 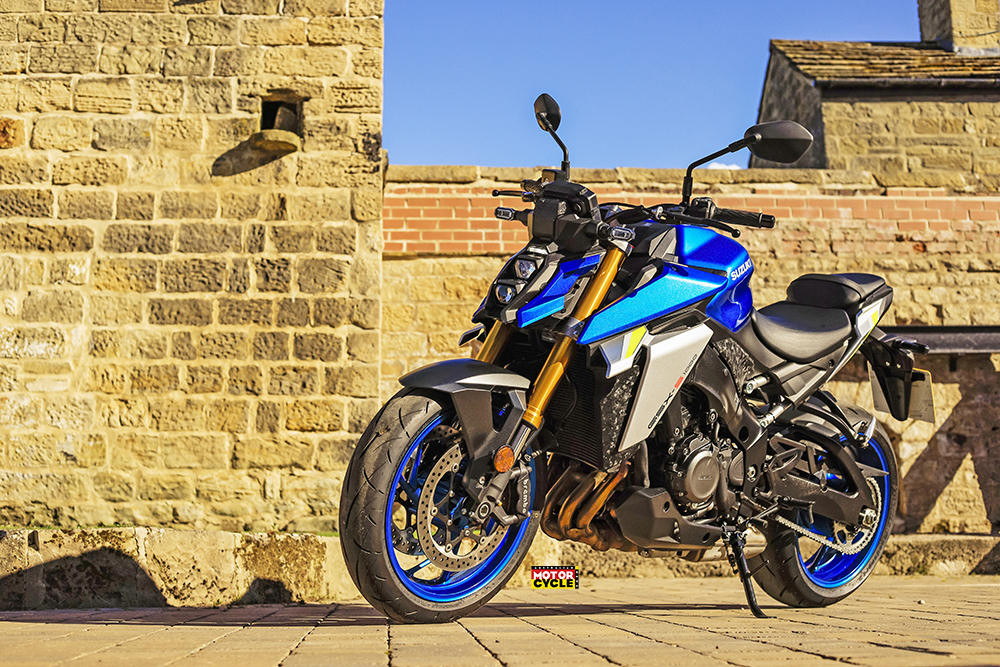 The great news for Suzuki fans is that this latest nakedbike sounds a little old school, and makes that charismatic induction noise of older GSX-R1000s. I’ve always liked the sound of inline four-cylinders out of Hamamatsu – it sounds meaty. And in an era when bikes are being muffled more than ever, it’s refreshing to hear. 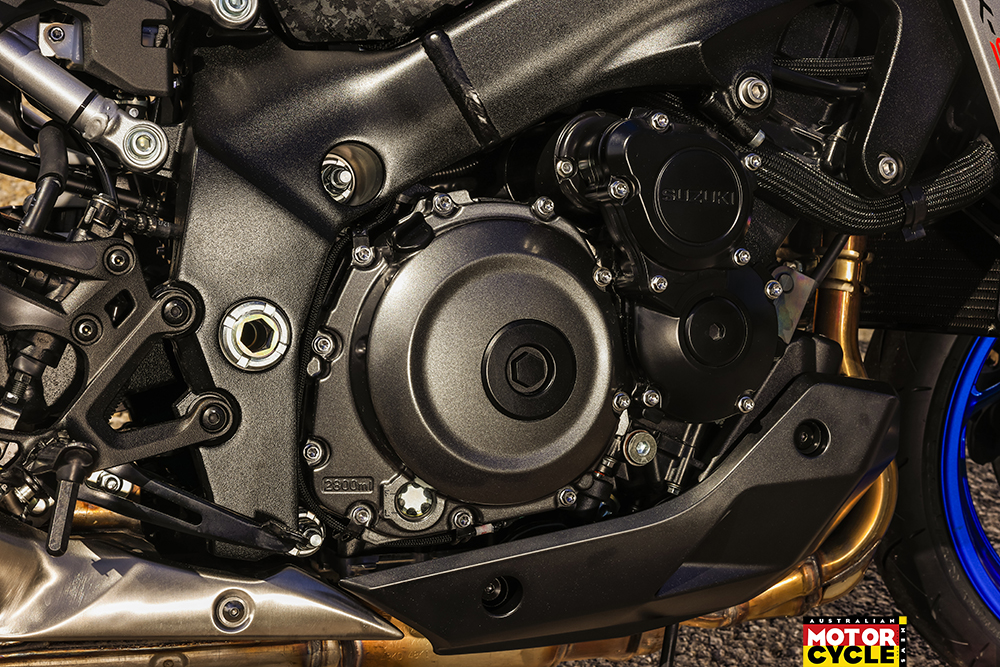 There are three straightforward riding modes to choose from which change the engine character and power curves, but still give full power. The modes have always been called A, B, and C but now someone in marketing has decided to turn them into words; Active, Basic and Comfort. Suzuki has in the past been criticised for having sharp or aggressive fuelling, but that has been mainly rectified on the new 2021 model.

A, or Active, is still a little too sharp and I’m unsure why you would ever need it. Some riders may prefer a snappy throttle, but I opted for the softer B mode on both the road and the track. C… sorry, Comfort offers a clear change, and would be ideal for inexperienced riders, or when conditions are tricky or running in new rubber. But I spent 95 percent of my time on the bike in B, or Basic mode. 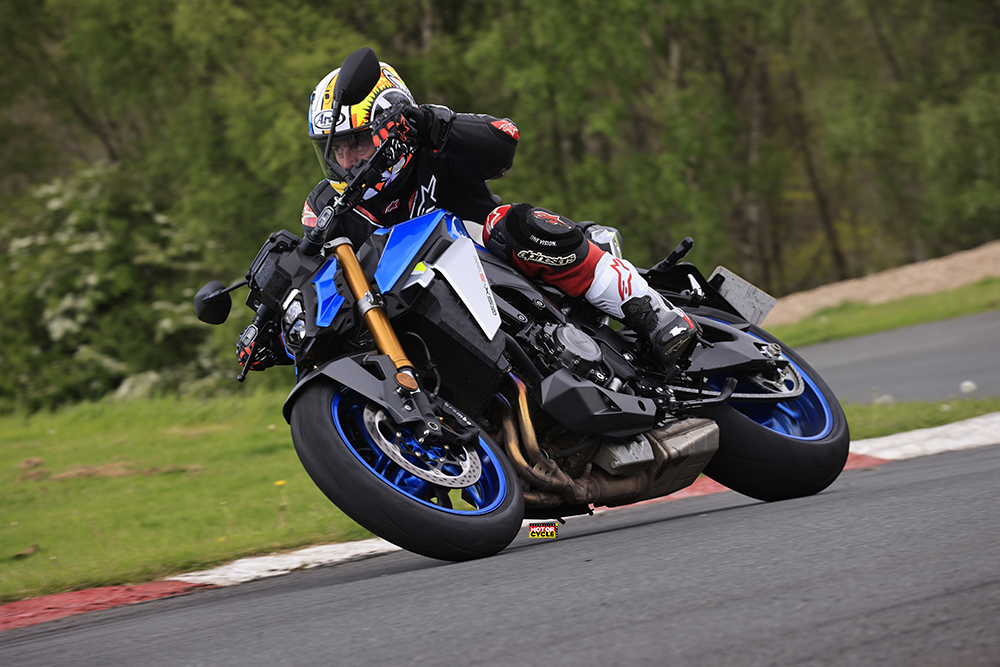 The change in peak power between the old and new bike is hardly measurable, but the change in torque is. I was nicely surprised by the drive from the four-cylinder GSX-R1000-derived engine. Low-end torque has increased a fraction, but it’s the midrange that was inspiring. It drives like a bike with a larger capacity and with real grunt – I like it. On occasions, I flicked back a few gears on the now standard up-and-down quickshifter for a brisk overtake when it really wasn’t necessary.

The quickshifter works smoothly and again is an added bonus on the 2021 model. Ride the torque, drink in the charismatic exhaust note – for a Euro-5 compliant bike, it doesn’t sound half bad – and have fun. 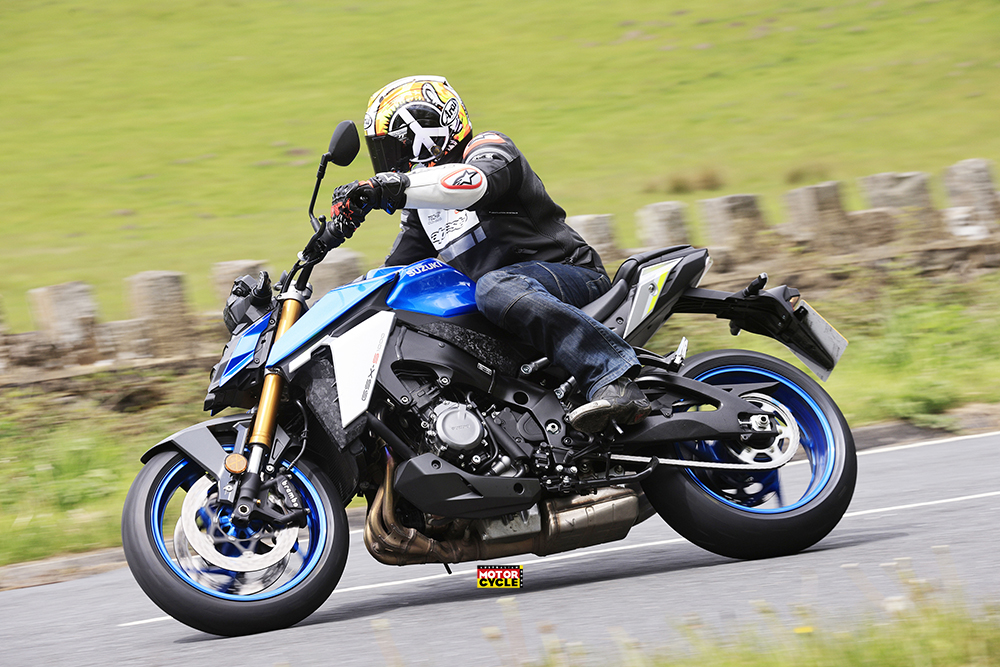 If you want to get your head down and chase your mates on their far less comfortable sportsbikes, the GSX-S1000 will deliver. It now revs 1000rpm higher to its soft rev limiter, and is quicker than I was anticipating. I’m unsure why, but I didn’t think it would be this grunty, but then I remember what the old GSX-R1000 K5 was like and that even in today’s world, 112kW is still more than enough.

With the traction control deactivated, which can be done on the move, a whiff of clutch will send the front wheel skywards in the first two gears, and even in third with some aggression. The no-nonsense engine makes this a fun, usable bike – happy to drive along using its torque, or hang onto much sportier machinery (should you chose to risk your licence). 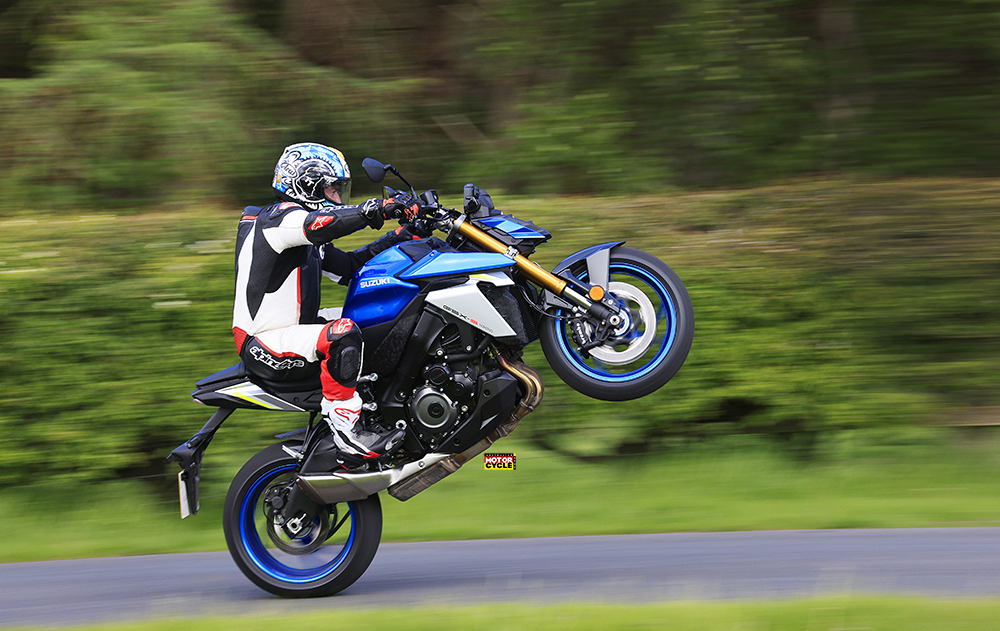 My ride was split into two parts. A brisk 160km road component on a real mixture of roads, followed by numerous runs up the notorious 1.45km Harewood Hill Climb, with a combination of 11 tight turns. That was a courageous move by Suzuki to send the big GSX-S up the demanding hill on standard suspension settings and Dunlop Sportmax Roadsport 2 rubber, which is new for this year. We didn’t even lower the tyre pressures or change the suspension, just threw on some race leathers and went for it.

Out on the road, I’m in a happy place. The fully adjustable 43mm KYB fork feels controlled, the rear shock is behaving. The suspension on the 2021 model is the same as the previous model, but with revised settings to take the extra weight and torque, and the improved grip offered by the new Dunlop rubber. At normal speeds I have very few complaints, taking the picturesque but demanding roads with ease. 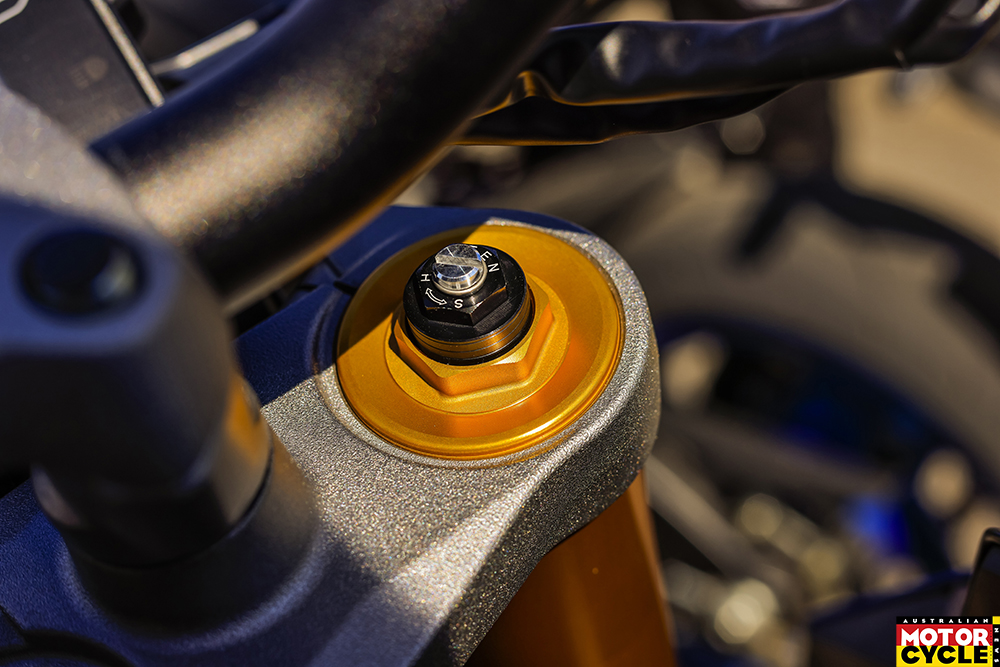 It’s only when you start to enjoy the full power, that the suspension’s limitations become more apparent. The showroom settings work effectively during normal riding, and the front set-up is rather impressive, especially considering the price tag. But hit some undulations at speed, and the rear shock sits like an obedient dog. Throw in some fast, bumpy corners and you can feel it working overtime. It’s never loose, but you’re aware you’re close to the limits. Though it’s only when you ride aggressively that you find the limitations of the rear shock.

Adding LED lights, a Euro-5 exhaust system and a larger fuel tank (up three litres to 19), has added weight to the Suzuki, which was already due a diet. If you’re jumping from the competition, like BMW’s S 1000 R or Ducati’s Monster, you’re really going to notice the physicality of the new GSX-S. But saying that, despite gaining a few pounds in its old age, the Suzuki still steers well, and that weight gives a robust feel to the handling. 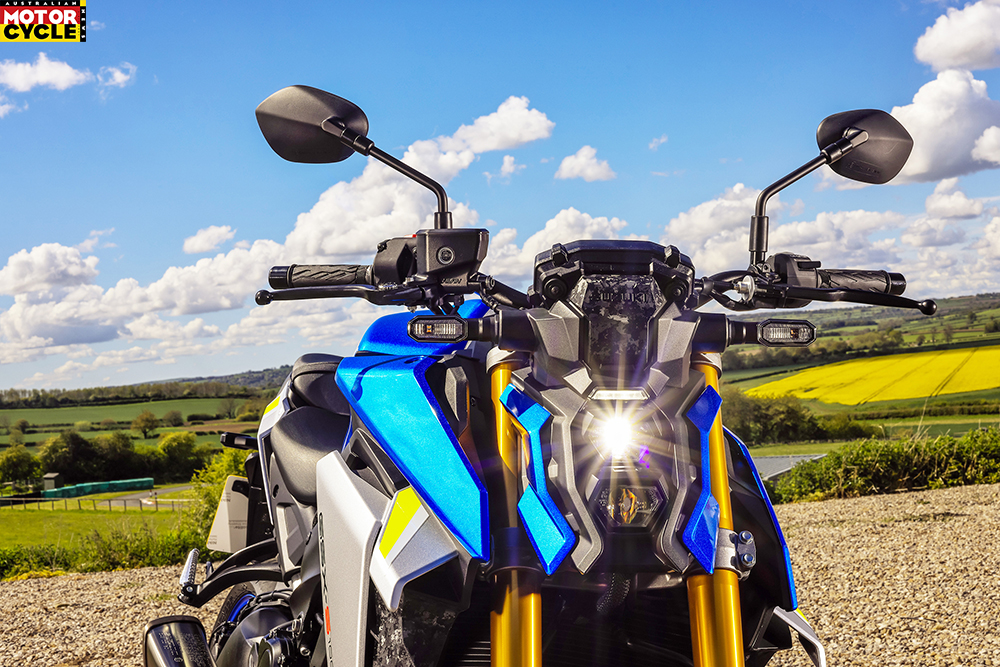 Changing into race leathers I was concerned the GSX-S1000 may be out of its depth on the demanding hill climb, which is fast in places, just touching 160km/h and there’s no room for error. But, the new Suzuki took to the challenge with surprising ease. Again, the steering was reassuring and accurate, the fork didn’t bottom out during vicious braking, everything was controlled and managed. The new Dunlops remained unfazed and, on a relatively smooth surface, the rear shock was well behaved and gave enough feedback to allow me to get on the power sooner and sooner.

I quite honestly thought the Suzuki was going to be shamed on this tight and twisty hill climb, but it wasn’t. The ’pegs eventually started scraping, and it’s by no means a racebike, but considering the bike’s weight, power – and assumed price – Suzuki has done an eye-opening job of setting the bike up for all eventualities from the off. 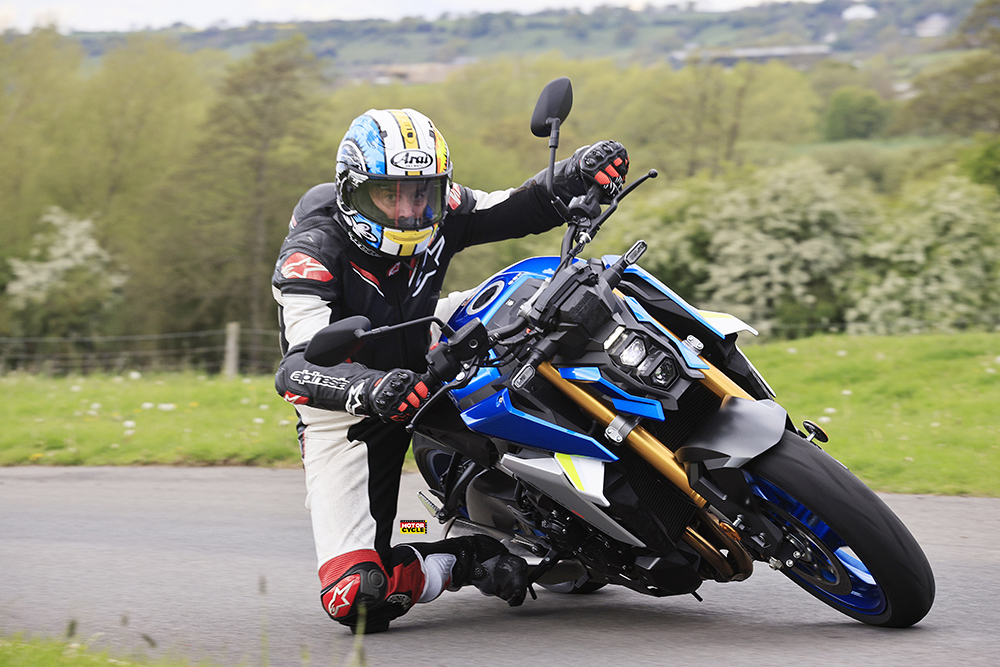 The Brembo stoppers remain the same as the previous model’s, and grab twin 310mm discs. Like the suspension, they are more than up for the job, and have a nice feel to them. It’s only when you start to ride the big Suzuki out of its design parameters that you find faults.

ABS is standard, though not sensitive to lean angle. And although you have a new slipper clutch there is no engine brake assist or many of the electronic rider aids you now find on some of the competition. Attacking the hill climb, the ABS was a little intrusive, but again we were really pushing the limitations of the bike. 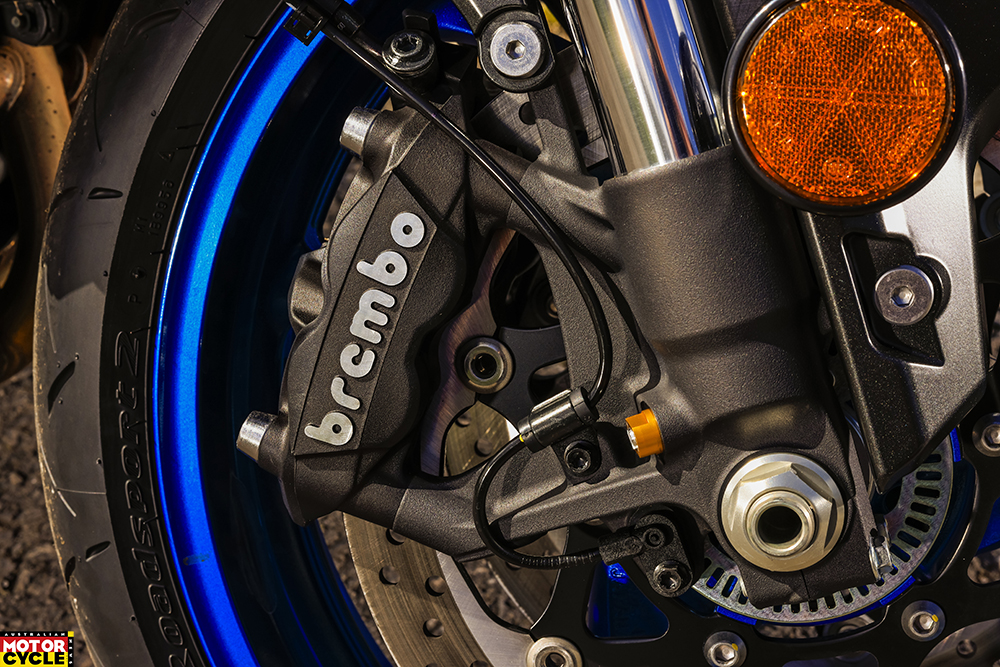 If you are fully loaded, two-up with luggage, and stopping from freeway speeds into a tight roundabout, the stoppers may feel a little lacking, and the absence of cornering ABS may perturb a few new customers, too. But they are up for the job.

Great news for would-be owners is while it will almost certainly be less expensive than most of its competition, it doesn’t appear cheaper; I like the new aggressive styling and the stacked LED headlights. I even like the camo-like finish on some of the plastics.

Suzuki has made the bike more versatile and more comfortable than previously, too. The tapered ’bar is now 23mm wider and 20mm closer to the rider, thus creating more upright ergonomics. The now larger 19-litre fuel tank has also been reshaped to increase comfort and give a greater range. 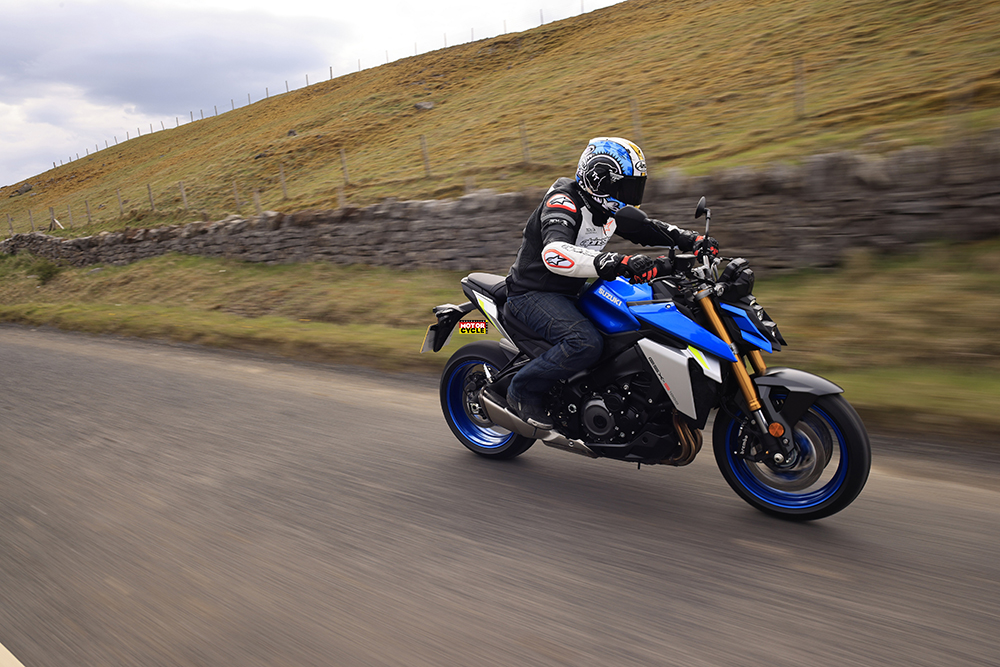 While we are talking fuel figures, Suzuki quotes 6.2L/100km, down from the previous official figure of 5.3L/100km. A quick bit of maths gives a theoretical tank range of 373km, up from 320km previously. On that swift road ride, I managed 5.8L/100km, above Suzuki’s claimed figure, with a theoretical range of 394km.

My road ride was only 160km long and I’d like to add more kays before categorically commenting on long-range comfort. But it’s nice to see Suzuki has fitted an actual seat, rather than a race seat like some of the competition – and the pillion even gets a reasonable-looking perch. Out of all the bikes in this category, and based on a first impression, the Suzuki is scoring highly for those who spend considerable time in the saddle. 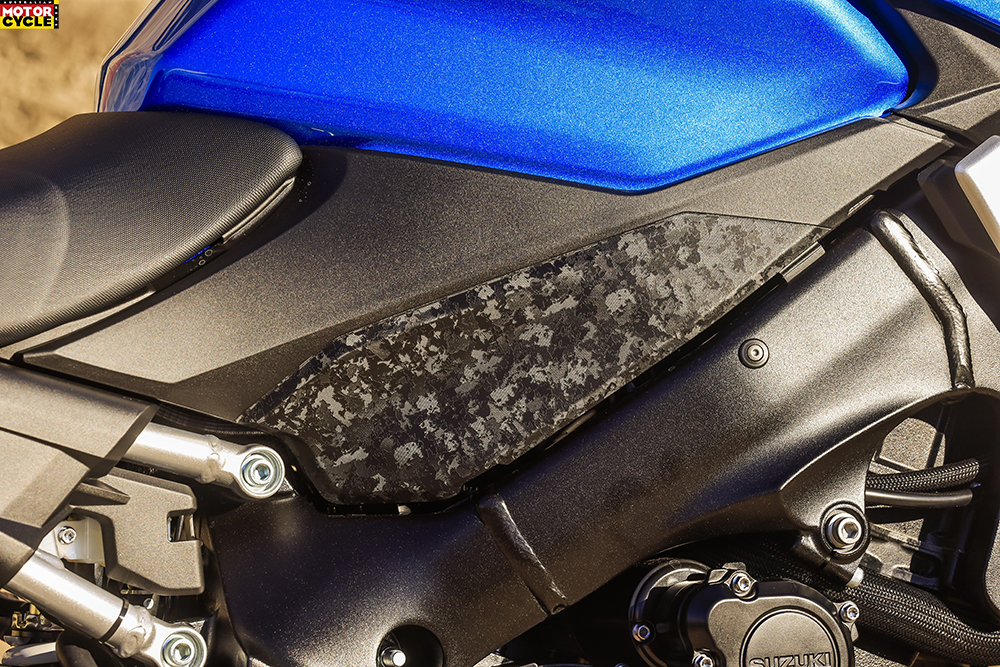 The list of what features the Suzuki doesn’t have compared to higher-priced rivals is probably longer than what it has. No IMU to determine lean angle and therefore no lean-angle sensitive rider aids, and so conventional ABS and traction control only. There’s no engine brake assist, no pit lane limiter, no cruise control, no anti-wheelie, no slide control, no huge TFT clocks… It is relatively basic and slightly behind the market average. But if you don’t want any of those electronic aids – and, more importantly don’t want to have to pay for them – then the GSX-S is a thoroughly modern and excellent option.

Suzuki has added simple and easy-to-use multifunctional clocks, an up-and-down quickshifter, which works perfectly and fitted as standard, and there is Suzuki’s unique easy start and low RPM assist, which increases the revs slightly as you release the clutch. The LED headlights are a nice touch, too. 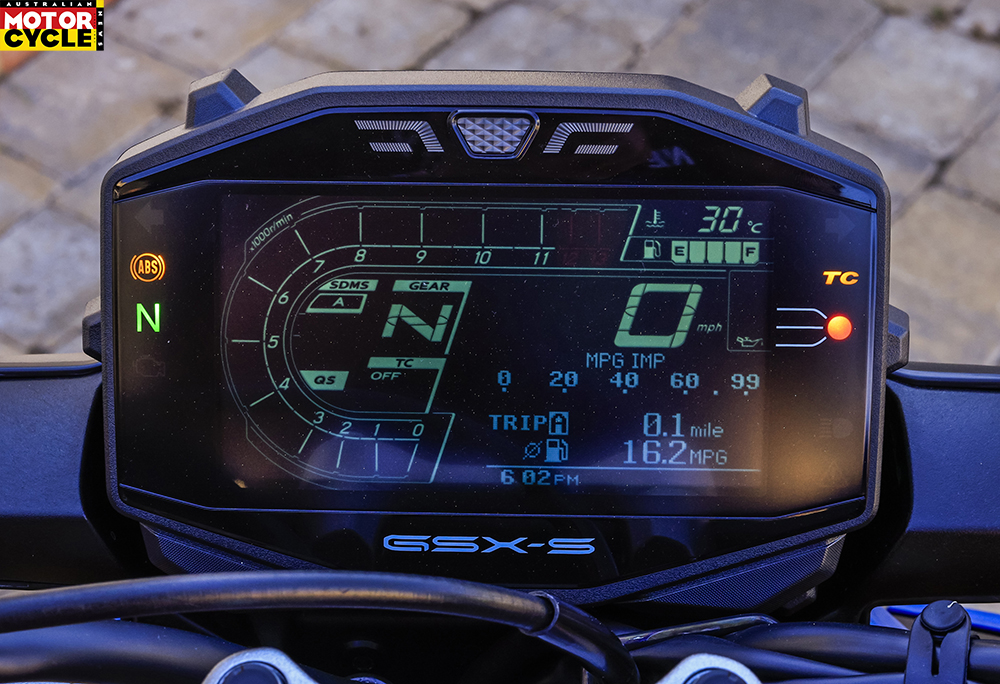 Accessories are mainly cosmetic, including red Brembo calipers, or crash protection like engine covers. Suzuki list two different tank bags, but no rear luggage or any type of screen. And there’s no option to add any rider aids, which is a shame, ’cos cruise control would be nice.

This GSX-S isn’t a huge leap forward in development. If the capacity had increased or tech like an IMU was added to facilitate lean-angle sensitive rider aids, the price would also need to increase considerably – which wasn’t the aim for Suzuki. Delivering a reasonably priced, desirable and usable nakedbike was key – which is precisely what it has done. 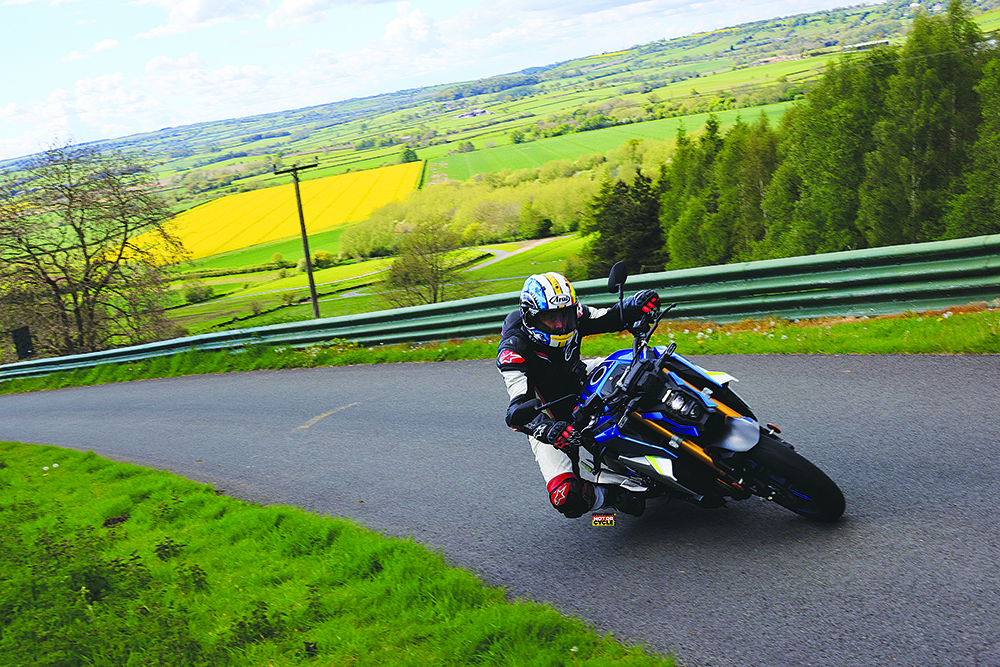 And it’s still more than qualified on the road and even on track, up to a point. The engine has real-world torque, the rider aids are just about adequate, and it’s priced very competitively.

You could argue it’s rudimentary, and some riders who are coming down from superbikes with much higher specs may be put off, but most riders who’ll buy it will be drawn to its simplicity and everyday usability.

Check out our test of the previous generation GSX-S1000 here 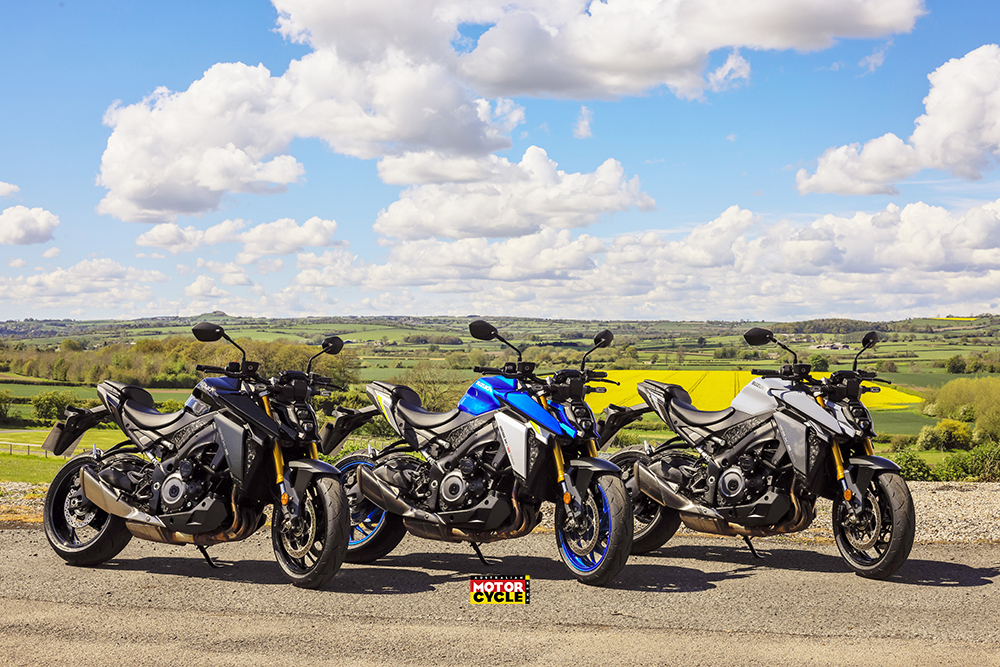