You are looking at the water-cooled engine that will power Moto Guzzi into its next century fitted to the Moto Guzzi V100 Mandello, the first model to be powered by it.

The Italian heritage brand, owned by the giant Piaggio Group, has leaked images of a model that celebrates its 100th anniversary by looking forward while retaining important design elements of old. Check out the other Moto Guzzi 100th Anniversary models here.

Full details will be revealed at November’s EICMA Show, but the images and video of the V100 Mandello clearly show this is a performance model aimed at everyday practicality. 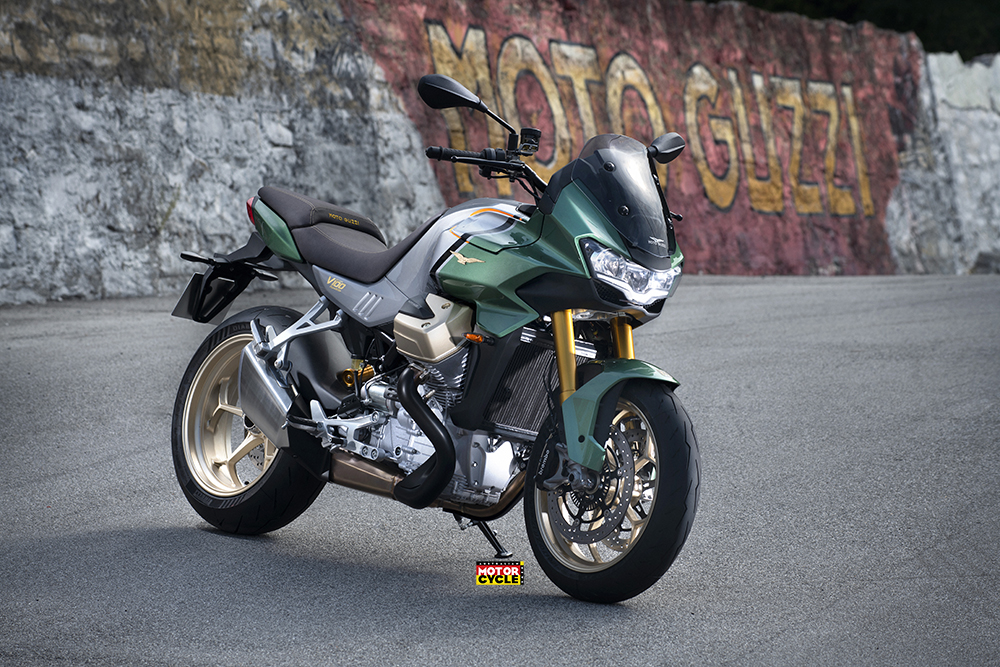 While the engine boldly maintains Moto Guzzi’s traditional architecture of a transverse V-twin it is water-cooled and at least of 1000cc capacity, making it the largest engine in its range. Similarly, that engine is a stressed member of the frame and retains Moto Guzzi’s long-held commitment to shaft drive. 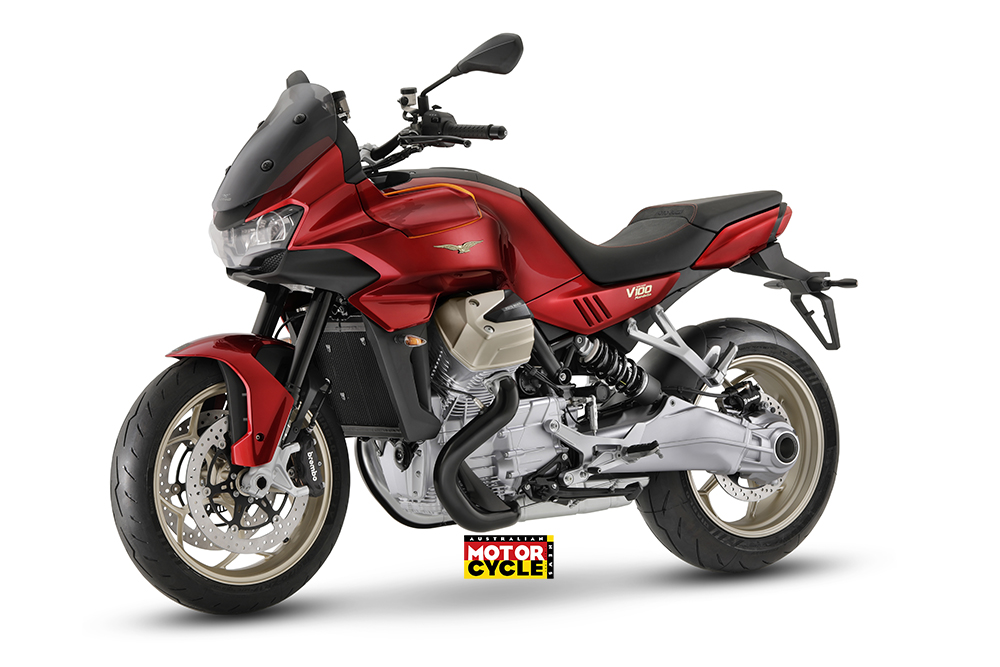 Also obvious is the level of technology. There appears to be semi-active suspension, aerodynamic and adjustable bodywork, high-end brakes and sports-oriented tyres.

Not convinced Moto Guzzi is about to roll out new models? As part of the Mandello tease, it released conceptual images of a completely new factory and museum to be built using eco-friendly principles at its current site in Mandello del Lario. This is where every Guzzi has been built to date. 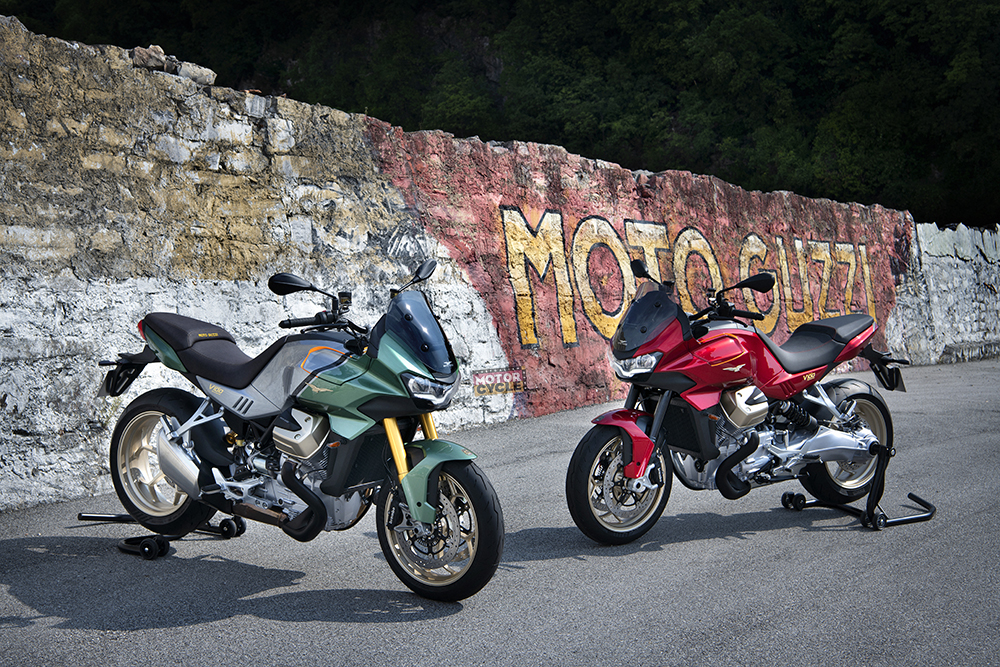 Moto Guzzi has released further details of its new Mandello that is set to lead the brand’s charge into the future. 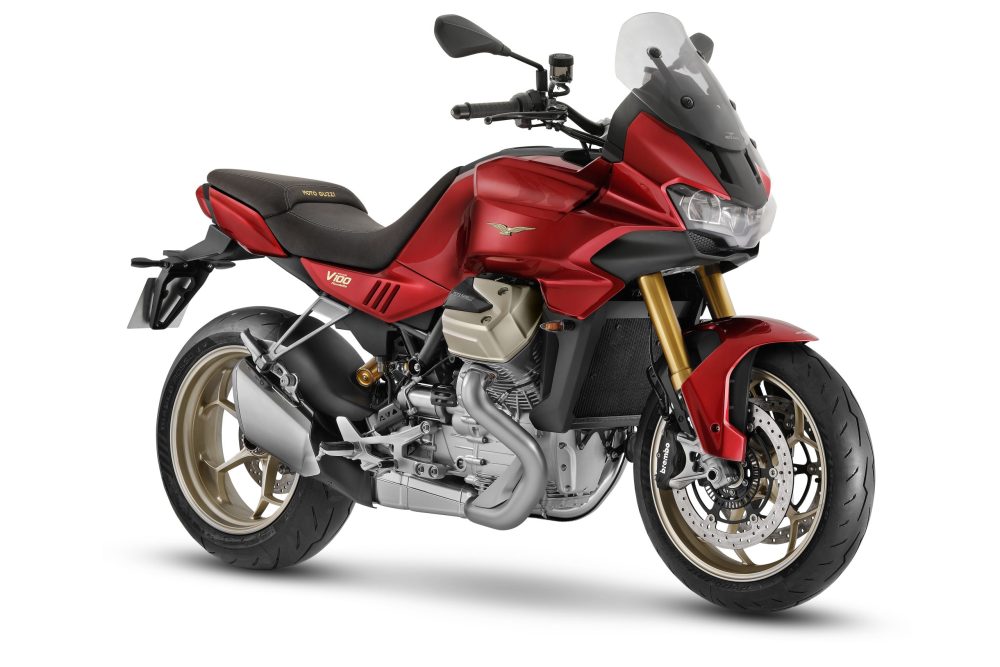 The Mandello’s design has allowed for the development of an extremely compact and lightweight engine, which is 103mm shorter than the V85 TT small block. The new twin stands out from all the engines recently built in Mandello del Lario for its cylinder heads, which are rotated by 90 degrees, a decision that increases on-board comfort and rationalises the positioning of components in the intake and electronic injection systems. 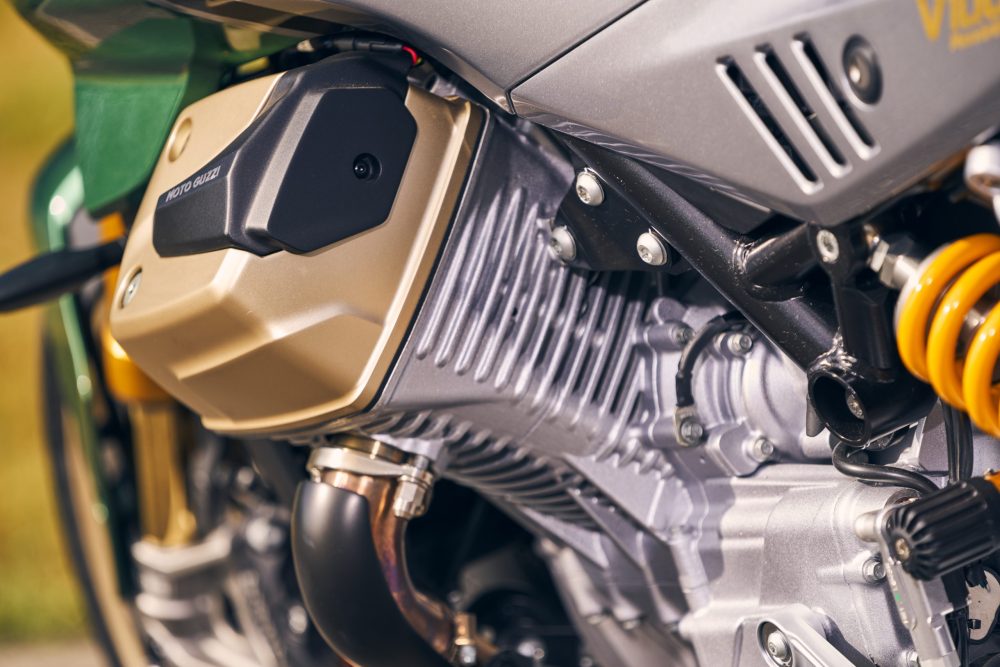 Its actual displacement equates to 1042cc, while timing involves a double overhead camshaft with finger followers and four valves per cylinder, which are chain driven. It also flaunts a wet sump lubrication system, a liquid cooling system, and a hydraulically controlled wet clutch. 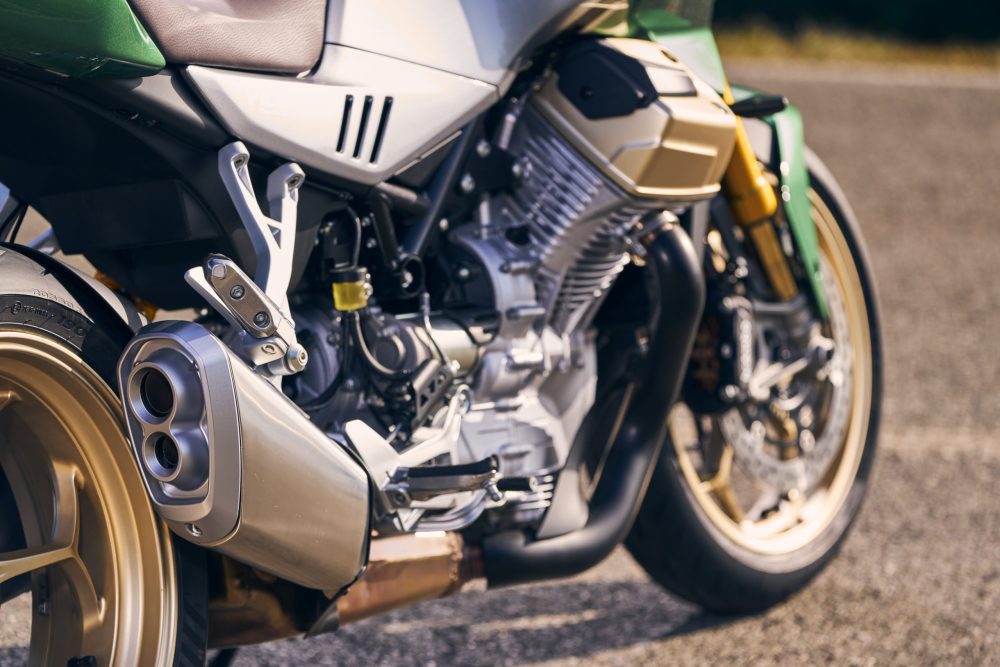 The shaft drive employs a long aluminium single-sided swingarm, now positioned on the left. The drive shaft exit position, much lower with respect to previous Moto Guzzi engines, does away with any suspension reaction owing to the transfer of torque, with no need for linkage on the swingarm. This makes for a smooth ride during both acceleration and release, similar to that offered by a chain drive, but with the typical advantages of the shaft, so less maintenance and greater cleanliness. The new engine is housed in a compact new chassis, with a steel tube frame with a wheelbase of 1486mm. 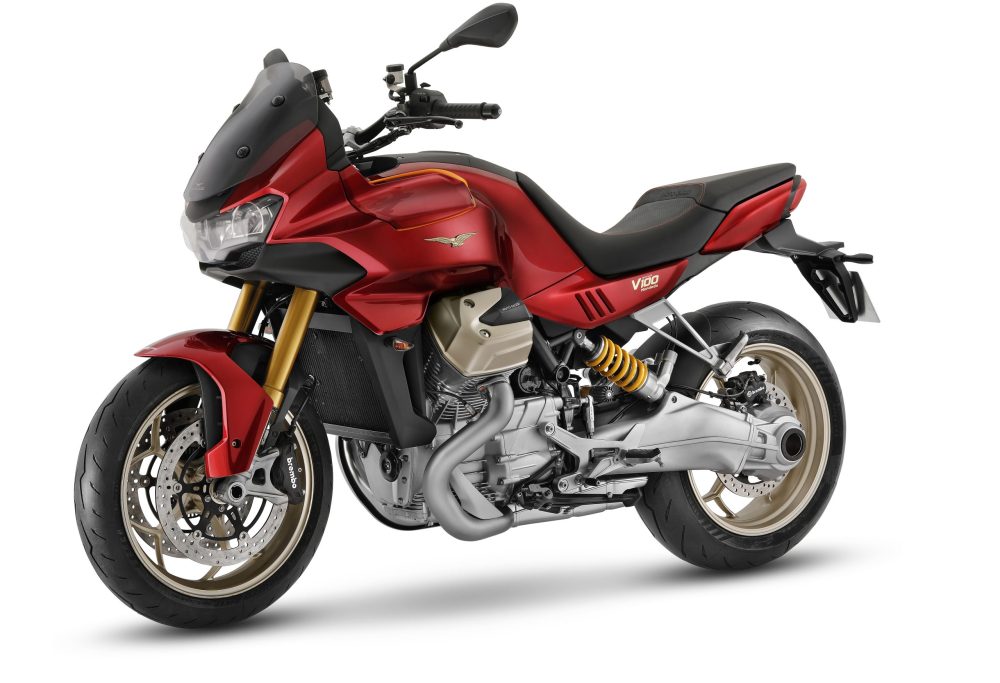 The Mandello boasts a generous saddle and active, relaxed riding position with a single variable-section aluminium handlebar and world-first adoption of an adaptive aerodynamic system that automatically adjusts the position of deflectors on the sides of the 17.5-litre tank depending on the speed and selected Riding Mode. The fully raised aerodynamic appendages reduce air pressure on the rider by 22 per cent, which brings V100 Mandello close to the level of air protection afforded by more voluminous and less sporty tourers, thanks also to the protection provided by the top fairing, the height of which can be electronically adjusted. 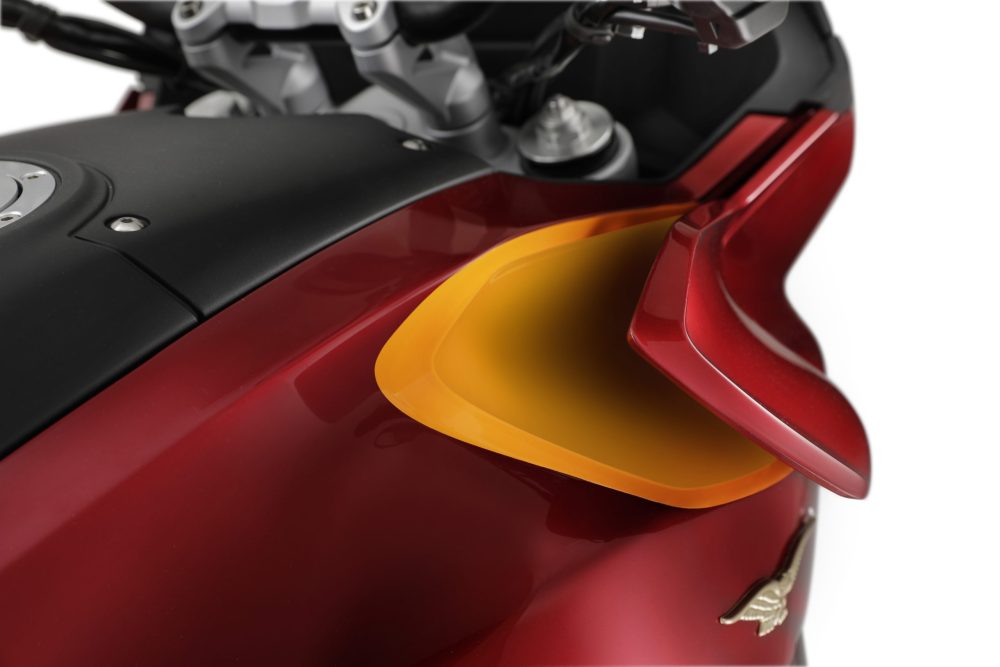 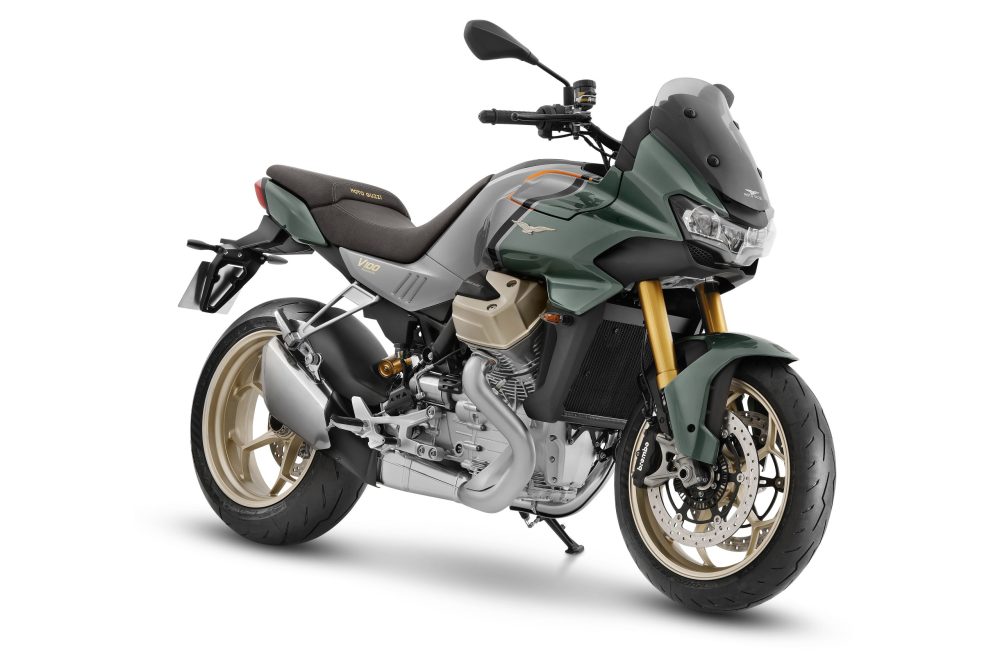 Four Riding Modes are available – Travel, Sport, Rain and Road with each managing three different engine mappings, four levels of traction control, three levels of engine brake and (in the version that introduces them as standard) also calibration of the Öhlins Smart EC 2.0 semi-active suspension, which can adapt automatically, minute by minute, to suit the type of riding and the road conditions, all of which are controlled and display on a 5.0-inch colour TFT dash. 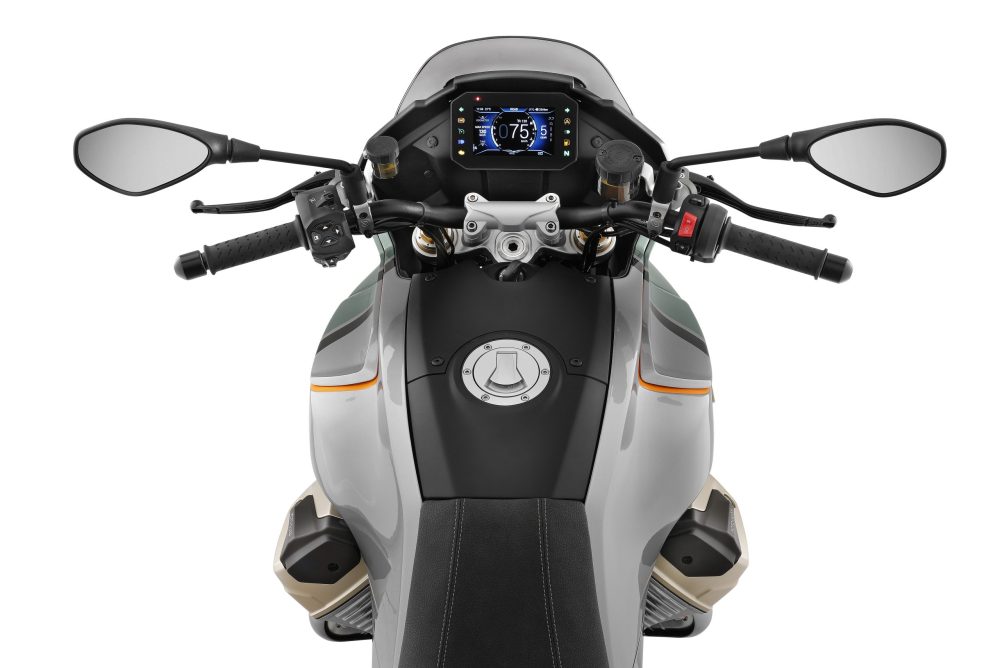 V100 Mandello is available in two versions, which differ in terms of their trim. The more comprehensive version includes Öhlins semi-active suspension as standard, plus a quickshifter, heated grips, and the Moto Guzzi MIA multimedia platform that allows a smartphone to be connected to the instrumentation via Bluetooth to extend its functions. Moto Guzzi MIA includes both the infotainment system for management of the voice assistant, phone calls and music via the intuitive handlebar controls and the GPS function, which allows the rider to view directions directly on the instrument panel once a destination is set on the smartphone. 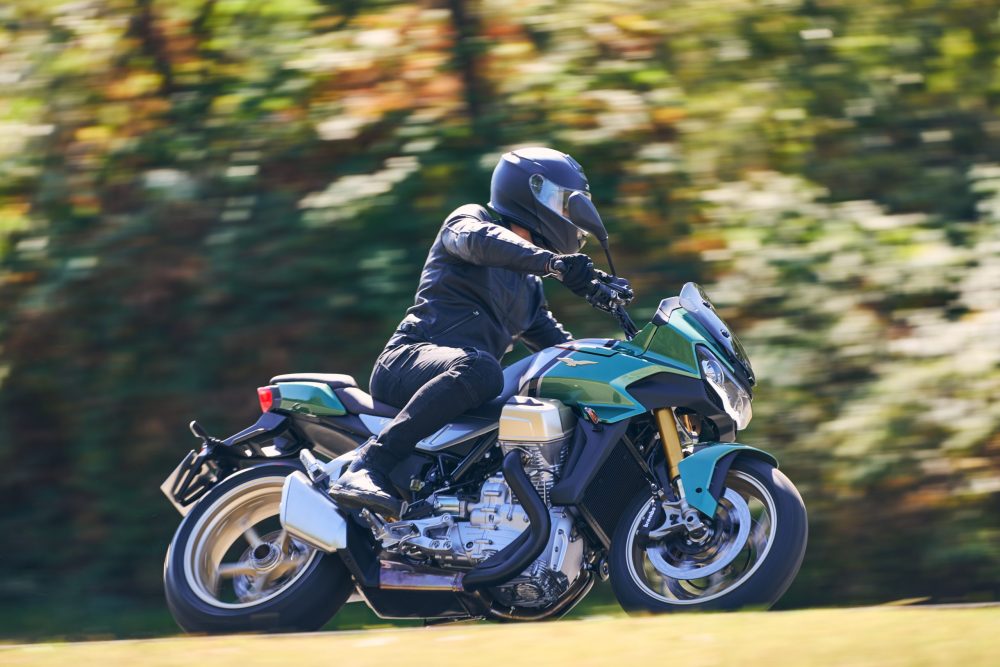 Moto Guzzi Australia is yet to confirm when the Mandello will arrive on our shores or how much each model will set you back. 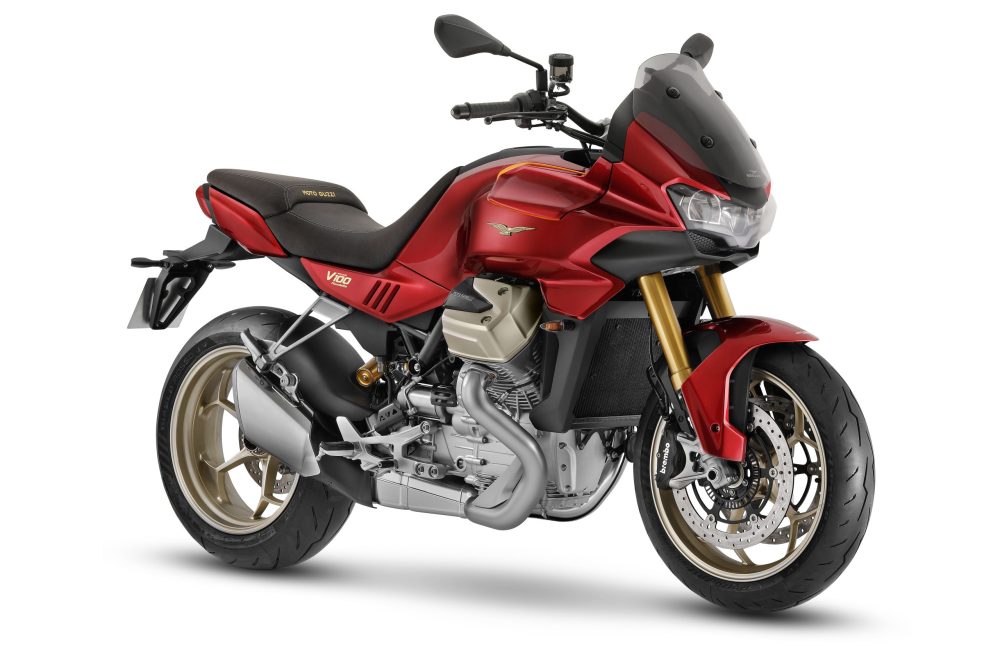