Would you barrel towards an opponent in a full-throttle fifth-gear slide? These blokes do

He takes risks in the midst of these furious riders, with his joggers and shorts his only protection. Even the goal keeper wears a helmet. But this guy, he’s the referee, and he’s skilful and respected. With his foot balanced on the oversized 40cm-diameter ball which weighs close to a kilogram, he takes out his penalty book before raising a yellow card up for all to see.

“The player goes out for five minutes to calm down,” he states. Everyone around seems to know exactly what’s going out there on the field and they’re all really happy to fill me in on the rules as we go along. It’s surprising how many spectators are here, considering there’s six Moto-ball games playing out in the south of France on this very same weekend. But like most games which involve round inflated balls in the part of the world, it divides the troops.

There is indeed the hard-core fans, the so-called Ultras who stand hard up against the fence and loudly cheer on their team with their hands raised in front of their banner. Others raise their elbows at the bar, or gulp down sausages in the barbecue area managed by the bloke they call the King of the Merguez. The atmosphere is fun and frantic. Come closer, you’re safe. For them, however, it’s wild and dangerous but remarkably somehow safe. This is Moto-Ball.

At 50 years old, the last 37 of them as a keen Moto-Baller, Jean-Marie Seignour can tell you a lot about the high-speed ball game. He has given “almost all of [his] life” to this fun and unconventional sport. A former international player, he has been president of the Moto-Ball Club of Valréas for the past 20 years: “Before it was more violent,” he tells me. “There were a lot of take-outs. We used to play more with the motorcycle, which today has become an accessory.

“By regulation, it is forbidden to take the ball with the motorcycle, only with the head and feet. In my early days, it was the other way around!”

“It’s an an adventurous side,” he continues, talking about the lifestyle and type of person the sort attracts. It is a real religion to some people and their families and, since his debut at the age of 15, Seignour has seen three, four and even five generations of Moto-Ballers pass through the French club.

He also remembers that 84-hour trip by sleeper bus to the Russian Caucasus region where they were invited, not far from Chechnya, in a meeting that was protected by high security in the less-than-desirable region of Russia, and the squad played several friendly matches in Ukraine in order to pay for the trip. 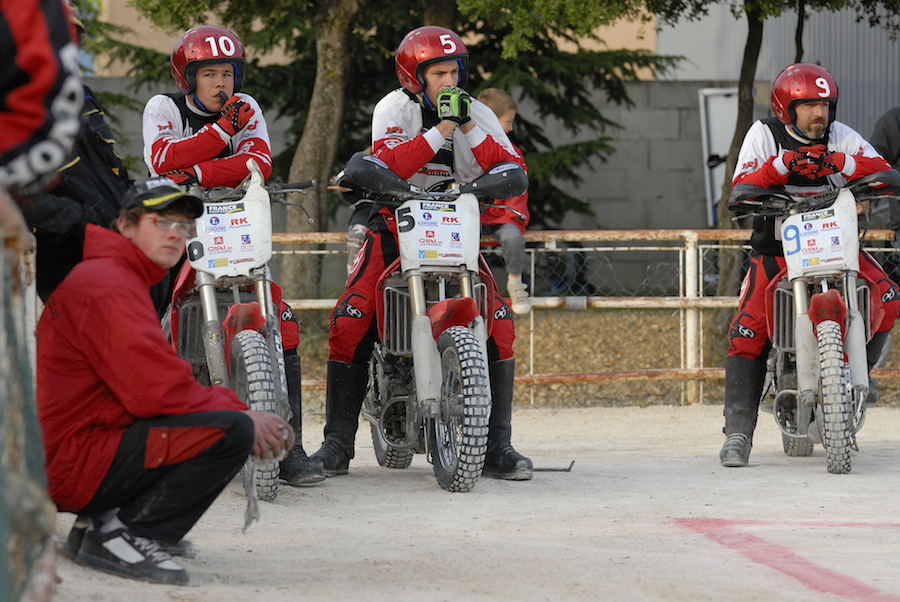 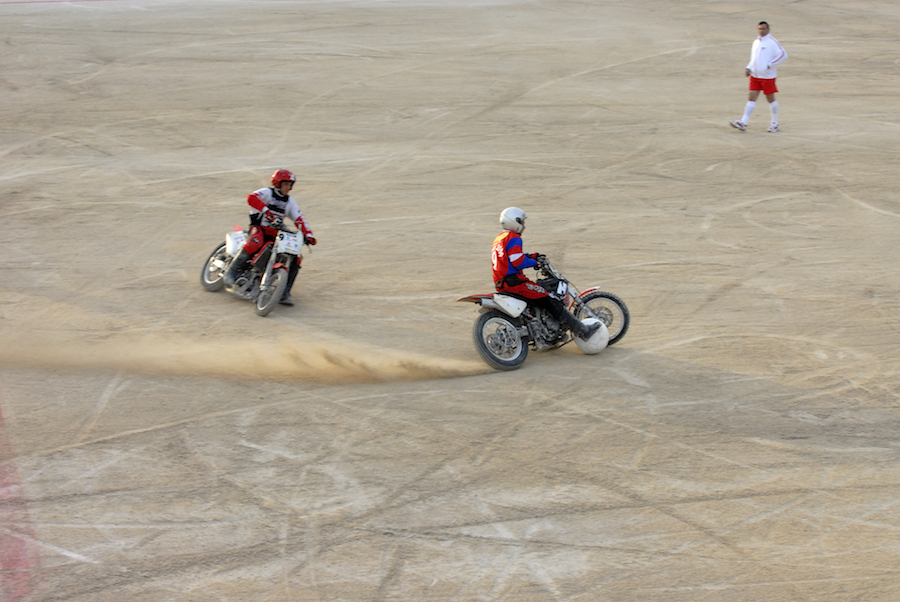 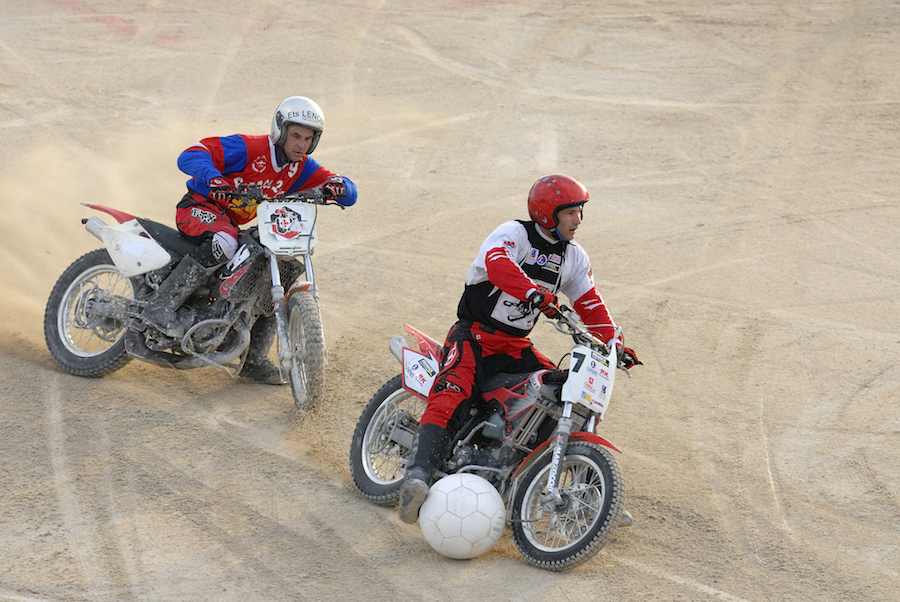 “On the road, our trailer fell off and passed the bus we were travelling in,” he recalls with a grin. “Coming opposite, a truck narrowly avoided it before the trailer crashed into a way below. The truck driver helped us to get it out and afterwards, he tried to explain to us something in Russian that we would only understand some two days and 700km later… he was the referee of the match in where we were going!”

Moto-Ball is one of the few FIM-sanctioned championships where two-stroke machinery is still king, though not necessarily driven by performance, it’s motivated partly by noise. Spanish brand Gas Gas offers machinery specifically for the two-wheel ball sport, a 250 EC enduro machine which has been lowered and fitted with a ball guide.

According to the Valréas Club’s mechanic, however, he prefers to work on the other popular choice among players, Honda’s discontinued CR250 two-stroke. And it doesn’t matter that the machines require some significant modification in order to be a useful and winning tool on the field, Seignour says Abdelmajid is a very accomplished welder. “He’s phenomenal,” he beams. “And it’s a fortune for a club like ours, a guy like that! He makes half the parts we need and doesn’t count his hours. He has the bad temper of all good workers. When we lose, he gets pissed off! He’s a winner like the rest of us.”

Both the gear-shift lever and rear brake are mounted on the handlebars, freeing up the rider’s feet for ball sports. Managing four bar-mounted levers while sliding your bike in an aggressive but controlled tackle in order to take control of an inflated ball is no easy task.

Abdelmajid’s counterpart on the opposing team, Gilles, is working on a Gas Gas when I wander over and enquire about his love for the sport.

He, like everyone else I’ve met, just adores the game but fears an every increasing focus on safety as it becomes bigger and more internationally recognised is dumbing down the sport.

“I hope we will keep our French game risky enough to make [a good] show [for spectators] and not fall into international restrictive regulations,” he says. “Because it’s not ping-pong or a sissy sport.” Gilles followed in his father’s footsteps, a player before him, and when he’s not twirling spanners, he sometimes gets drafted onto the team as a substitute player.

“I’m 43 now,” he smiles. “Maybe it’s time to stop!” The wheel is turning and his team, Troyes, is bringing a new generation to the field in 2019. The future will surely prove them right: in this sport, club domination seems cyclical.

In a burst of pride and a flurry of noise, Troyes scored a goal just before the break before the last quarter. The announcer turns off his microphone and silence falls back on the stadium as the overheated clutches cool down and both coaches assemble their teams in the locker room for the final pep talk.

Enormous spotlights come to life to light the final quarter which is being played at night. They roll back out onto the field and take their places. As fatigue builds up, the game gets meaner but the control of the slides remains superb, the ball stuck on the side of the bike by one foot.

At 10.30pm, the final whistle blows and the group of rowdy Ultras are ecstatic – Valréas remain undefeated at their home ground as the scoreboard flashes 4-1, in favour of the home squad.

Fierce and aggressive rivals on track, the tension disappears at the end of the night where opposing players and spectators all come together to relive the match and eat and drink together, swapping engine exhaust for barbecue smoke and fossils fuel for French beer and wine. Nicole is the club’s mother hen first and the club’s treasurer second. She prepares the food for the fully-catered training sessions twice a week. With a sparkle in her bright blue eyes she refers to the time spent doing the books, cooking, even sewing the torn jerseys and uniforms as “among the happiest days of my life,” she says with a laugh as she fills her glass. “And the only thing I ask them to do is to win!”

With 12 French championship titles to the Valréas squad’s name in the last fifteen attempts, the team does plenty of that.