“Tape’s up and we’re underwaaay!”

The commentator’s voice was beginning to sound like an old friend’s. It was, after all, the fifth event I’d heard the same bloke call in the last four days, each with as much passion for the racing and knowledge about both the riders and machines as the first. And I still had another day of racing left. I’m standing against the fence at the Oreti Park Speedway at Invercargill in New Zealand and the 1000cc sidecars are covering me and the hundreds of other delighted fans in lime and crusher dust as they blast their way around the 408m-long track. It’s the world’s southern most Speedway track and it sits less than a kilometre from Oreti Beach, the very sands on which Burt Munro used in the early 1960s as a proving ground for his record-breaking 1920 Indian Scout. The same beach, in fact, where I witnessed Burt’s great nephew Lee Munro wind his modern-day Indian Scout streamliner up to speed just the day before.

I’m at the 2019 Burt Munro Challenge, a delightfully unique jam-packed event that hosts six different disciplines of motorcycle racing across just four days. But they’re not token races to delight the battle-hungry spectators, these are the real deal. Take the hillclimb, for example, or to use its correct name, the 2019 New Zealand Hill Climb Championships. It’s been held on the steep 1.4km-long climb up Bluff Hill every year since the late 1920s when it was nothing more than a dusty gravel road, even old Burt himself was a regular competitor. 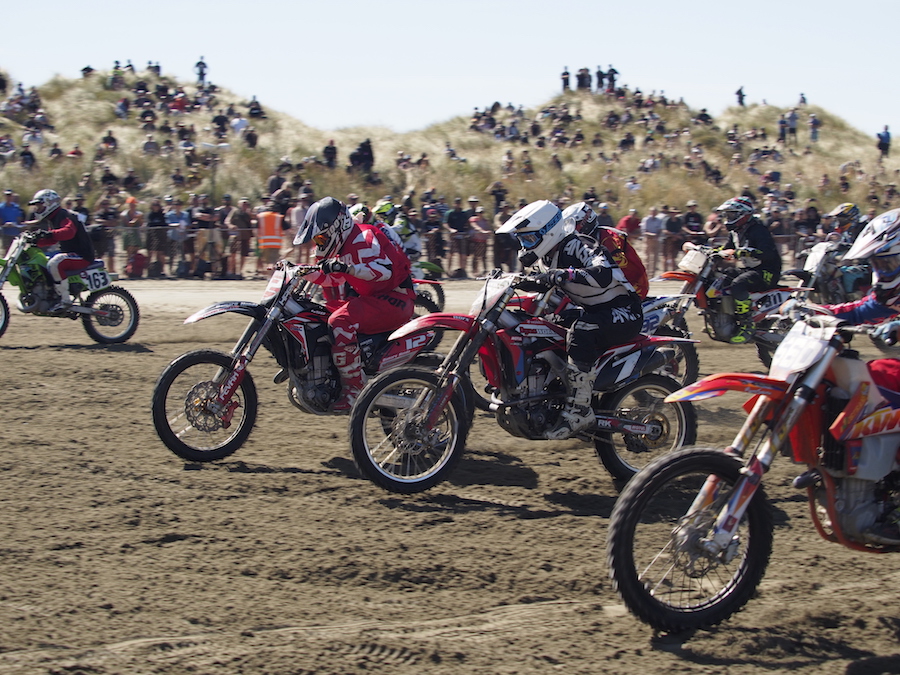 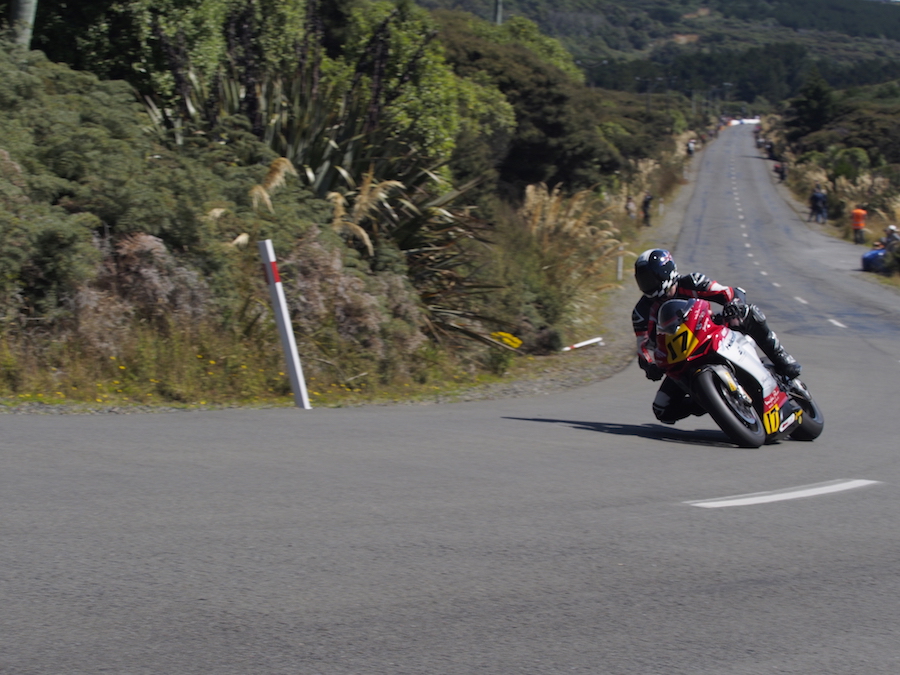 Or the Speedway, where fans were treated to the talents of three-time New Zealand solo champion Bradley Wilson-Dean as well as Danish star Thomas Jorgensen, the circuit and street racing fans were graced with the quick and talented Jamie Astudillo, the 18-year-old American girl who has raced motocross since she was four and who has vowed to make a career out of road racing. Then there was fast and versatile Aussie Damien Koppe who, after coming so close last year, was determined to win every race he entered. He was going well, too, until his KTM 450 gave up the ghost half-way through the 50-lap feature race on the beach for coveted Burt Munro Trophy.

But the thing that is wildly evident at every event of the annual Burt Munro Challenge isn’t the big names, or their perfectly prepared machinery, or even their epic and always close on-track battles. But it’s the ‘bit of Burt’ in the races, the riders, their attitudes and their set-ups. Often basic, but generally resourceful and, unlike motorcycle racing in most parts of the world, always without ego.

Competitor Kev Kinghan’s handmade timber toolbox is a perfect example, and when I pointed to it and raised an eyebrow in enquiry, he responded with: “Because we’re so remote down here, there’s still this mentality that we have to make everything ourselves. For a long time we couldn’t just buy things online like we can now, and it’s still in us.” And the modest, laid-back and imaginative atmosphere of the place began to make clear and perfect sense. 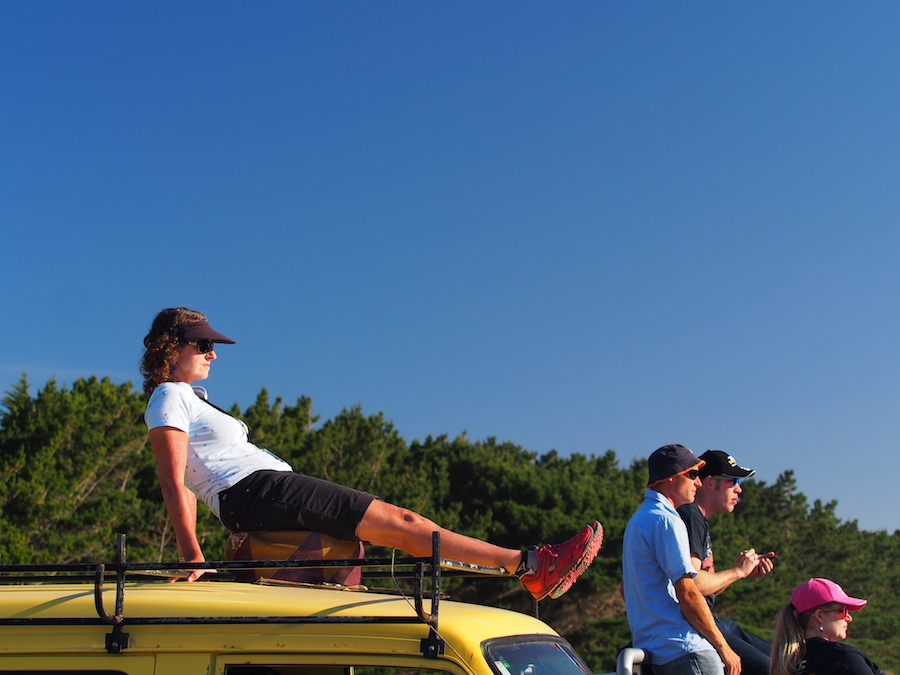 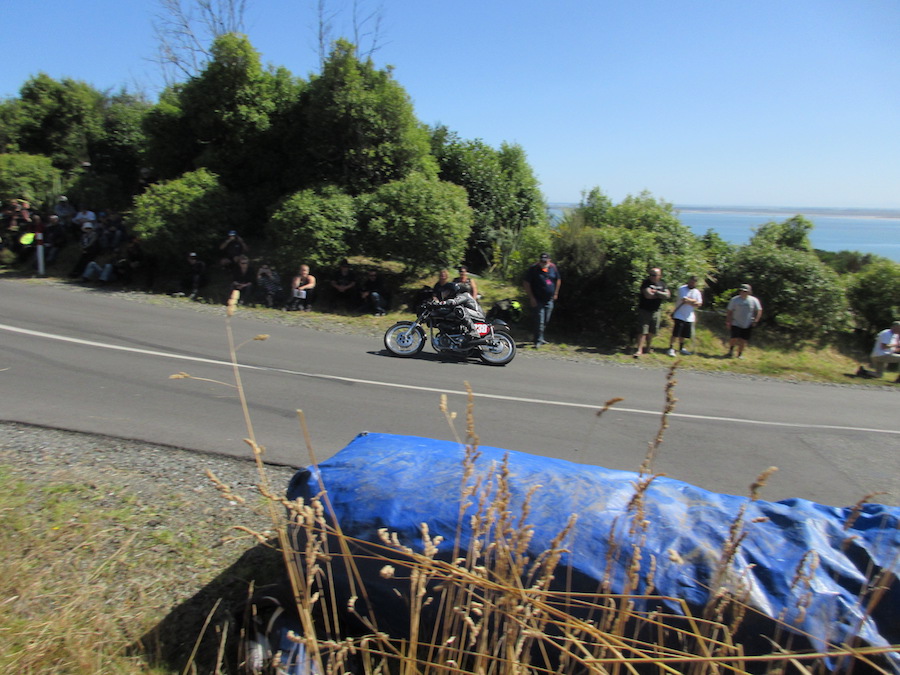 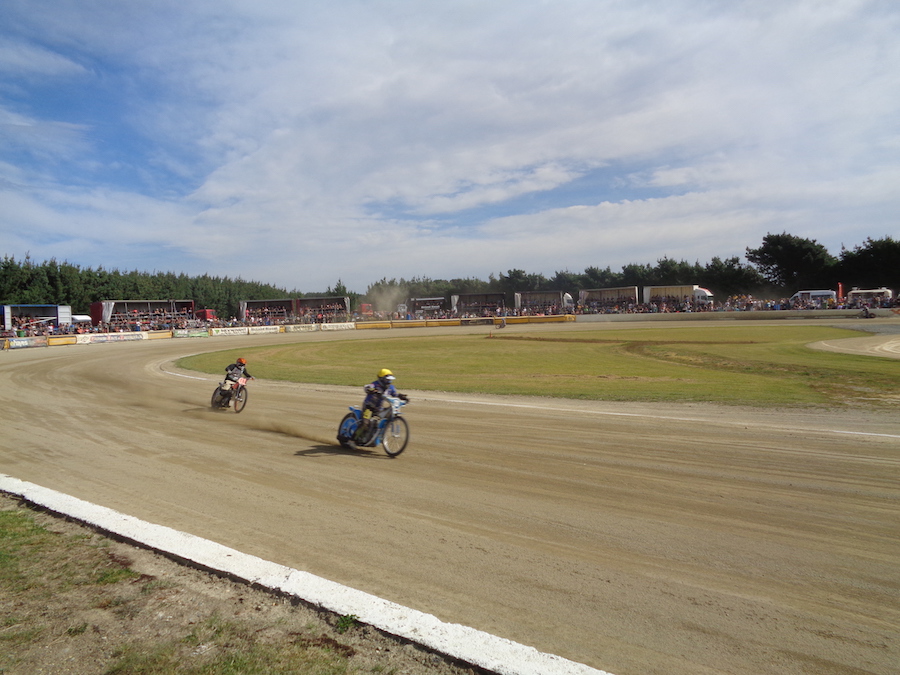 This year’s event was the 13th running of the Burt Munro Challenge and there were more competitor entries than ever before and more spectators than ever to witness it. Largely to do with moving it from its traditional November calendar spot to three months later, the weather is far better and more predictable in the new February time slot, and the 2019 event was showered in sunshine.

And as someone who’s witness the Isle of Man TT peeking through the hallowed hedges, and who’s stood wide-eyed above the tree line atop America’s Mountain during the annual Pikes Peak International Hill Climb, I can vouch for the Burt Munro Challenge as being one of the most unique and engaging motorcycle racing events in the world, despite only being 14 years old.

But you’ve really got to love bike racing to get the most from it. Because so much racing means you’re going to hear the sound of at least half a dozen motorcycles at full throttle at any one time for the best part of six or seven hours each and every day. You live it, you breathe it, you smell it, you all but taste it – I was even dreaming about motorcycle racing by the end of it. 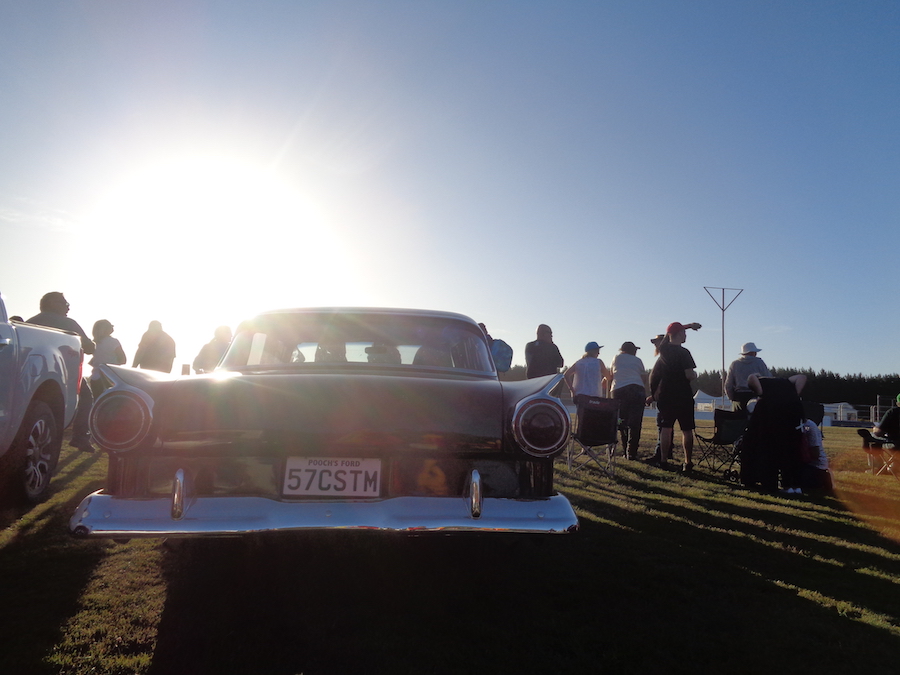 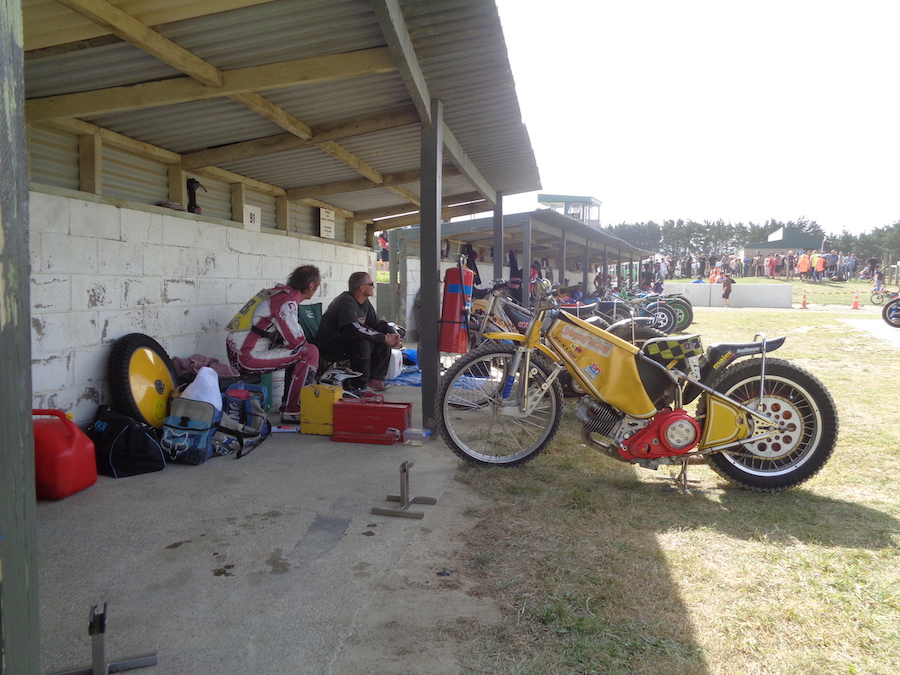 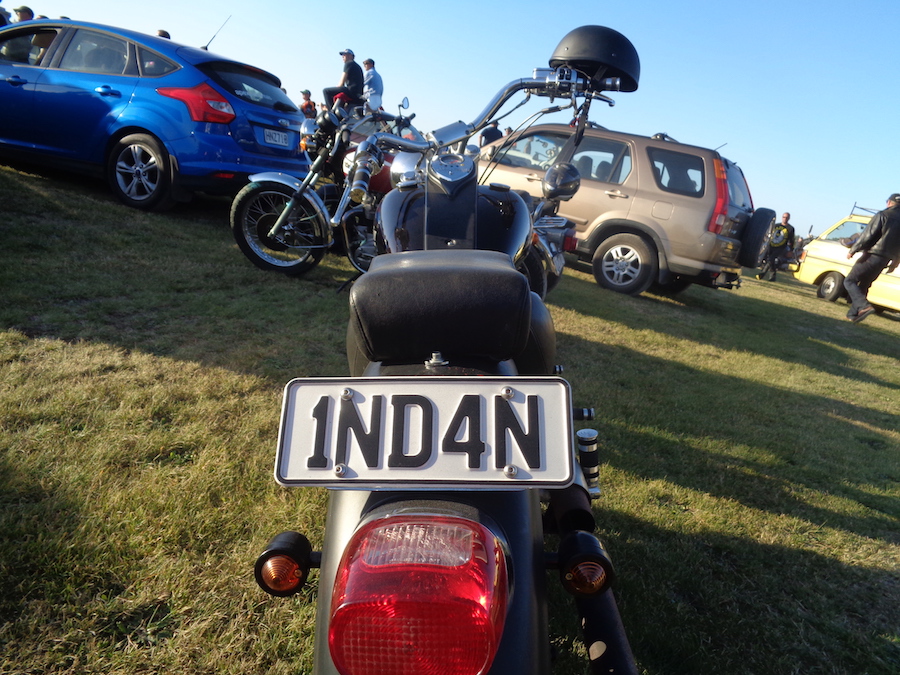 It might be the unmistakable shrill of Dale Finch’s MV Agusta F3 675 on the pipe towards the end of the long but bumpy straight up Bluff Hill, the howl of Cole Scammell’s 12-year-old Suzuki Hayabusa drag bike at it launches off the line at the Teretonga Park dragway, the unmistakable thump of Bill Swallow’s 1948 Eldee Velocette 248 or Garry Wells’ beautiful Rickman Metisse Matchless 650, or the distinct whaaaap of 70-something-year-old Reg Davey’s 1985 Honda CR500. It’s varied, it’s relentless and it’s a bike nut’s fantasy. 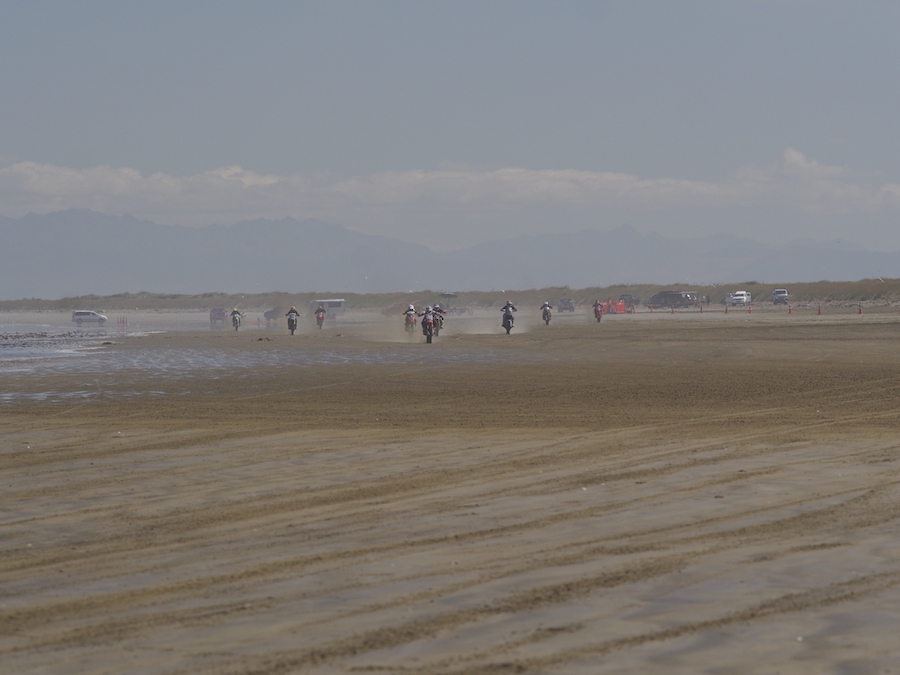 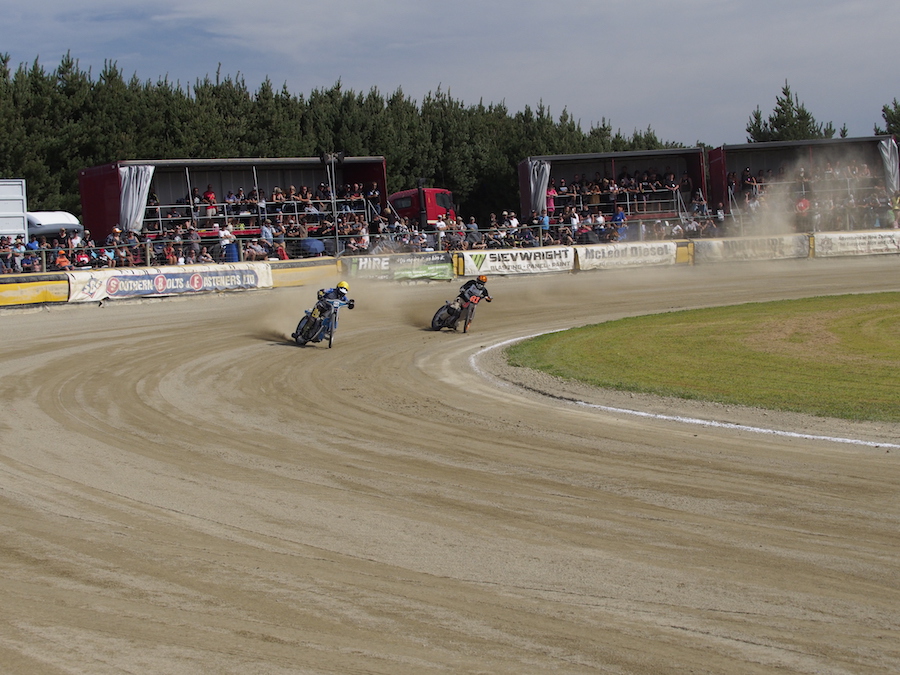 Burt one of my most memorable moments – and not just of this event – was a noise I heard on the beach when the chaos and commotion of internal combustion ceased momentarily. It was between races and there was some demonstration laps about to be run. The drawcard was that Burt Munro’s great nephew Lee Munro was about to follow in his great uncle’s wheel tracks and wind the modern Indian Scout-powered streamliner he hopes to set his own Bonneville record on up to speed down Oreti Beach.

But it was the sound of the replica of Burt’s very own 1921 Indian Scout, the bike used in The World’s Fastest Indian ridden flat out down the beach that still makes my hair stand up on end now. I’m not sure if it was the authenticity of what an almost-100-year-old bike should sound like, or the time between gear shifts as a result of the tall gearing necessary to achieve top-speed runs, or the sight of the thing as it disappeared down the sand in front of a calm and stunning ocean – it may have just been that I’d copped too much sun that day — but I listened until I couldn’t hear it any more and in that split second of silence, I felt the spirit of old Burt, as if I was standing there witnessing him practicing for what would be his still unbroken Land Speed Record set at the Bonneville Salt Flats over 52 years ago. That spirit of old Burt that is obscenely evident everywhere you look. The chaos roared back into my ears as a handful of 700cc quads complete with aerofoils and paddle tyres boomed off the start line for the first of their four-lap heat races. There really is something for everybody. And it feels like everybody is there to see it, too. The Burt attracts a noticeably different crowd than your average race meeting. The bearded man draped in well-worn and patch-covered black motorcycle gear still make up the lion’s share of spectators, but there’s families, there’s hispters, tangles of gangly teenagers, gaggles of pram-pushing mums, even possies of well-dressed older women – there’s a noticeable difference in how motorcycling is perceived and appreciated in this part of the world and it’s thoroughly refreshing. Any wonder Invercargill is otherwise known as New Zealand’s garage.

Take the time I saw the cops release a scooter rider back into the 80km/h traffic despite pulling him over for not heaving a helmet or shoes on, for example. I’m not condoning what he did, but he was a elderly gent who had managed to make it as far as he had in life by his own accord and the police and their common sense knew it. I ran into him the following day and asked him how he got on. 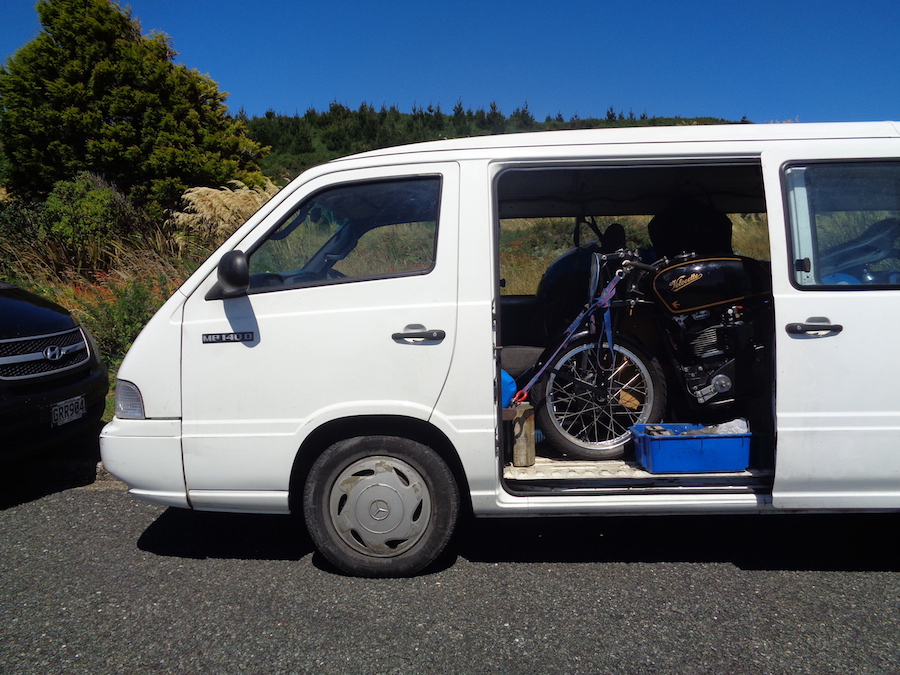 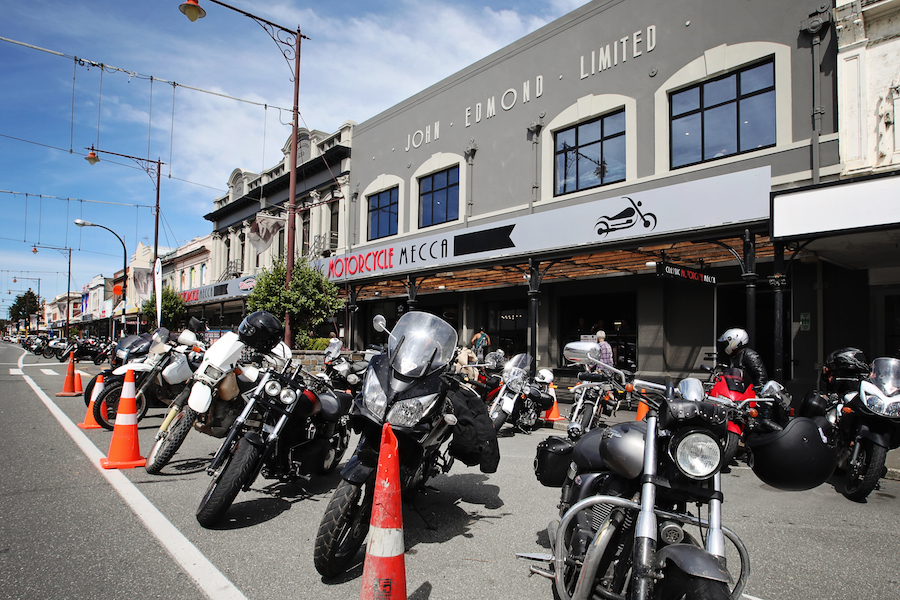 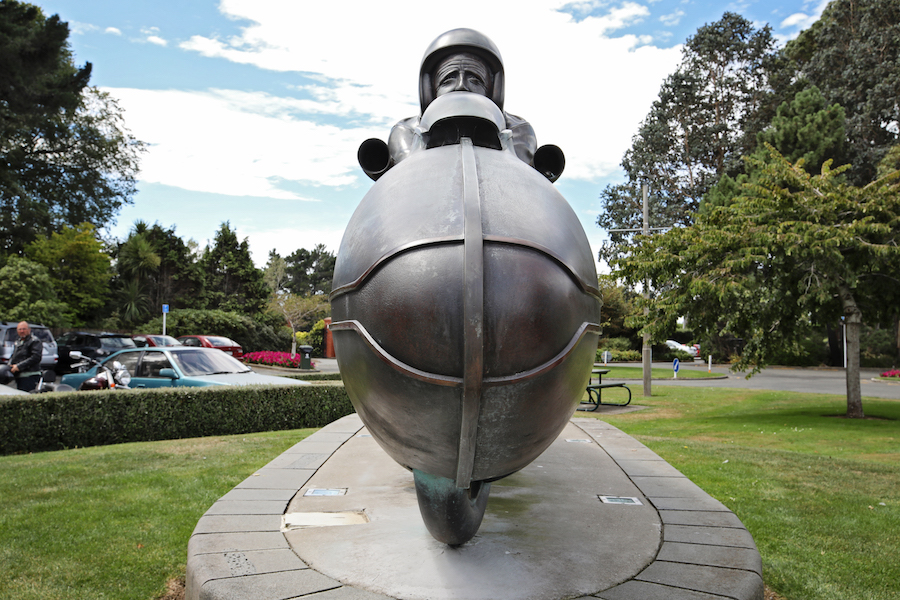 “I’m staying at the rally site and I needed to drop my paperwork down to the Teretonga Circuit,” he smiled, motioning to the 500m distance between the site’s exit and the circuit’s entry. “So I didn’t bother with my helmet. They didn’t book me, but they took my details and told me go home.” And when over 20,000 riders descend on a city whose population is 55,000, then common sense is key.

It’s a city that’s proud of its former resident racer, and nearly everyone has a story about their or someone they know’s brush with the eccentric old bloke and his addiction to speed. But they’re not always glowing. Burt wouldn’t mind though, cos pleasantries don’t make you fast and that’s all he was really interested in. 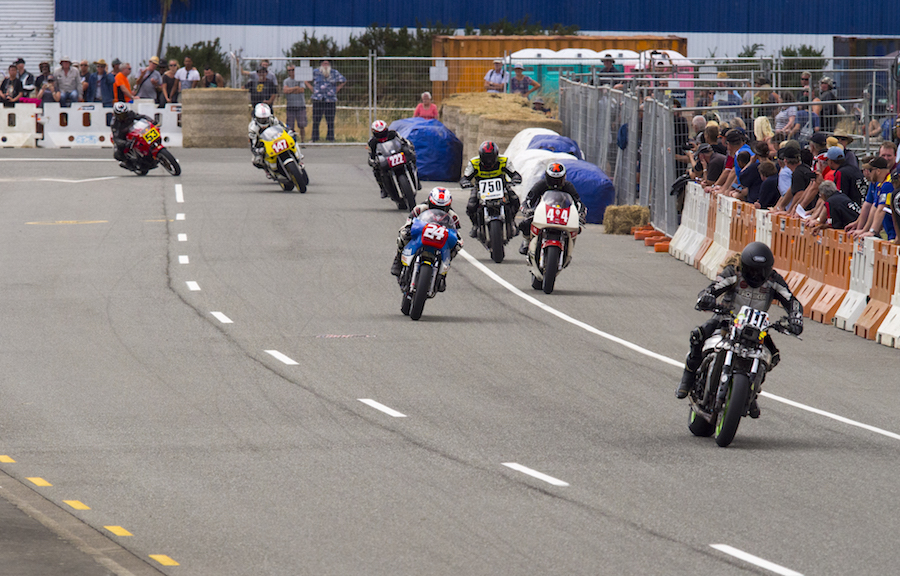 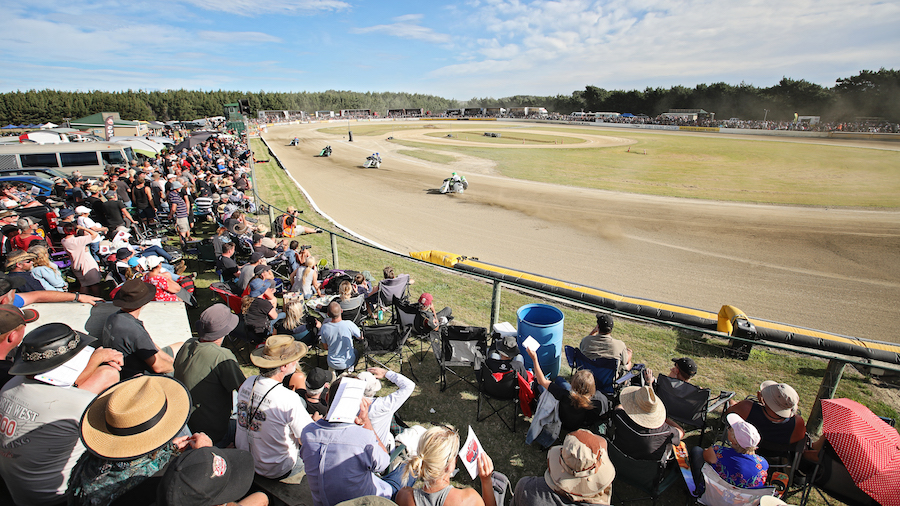 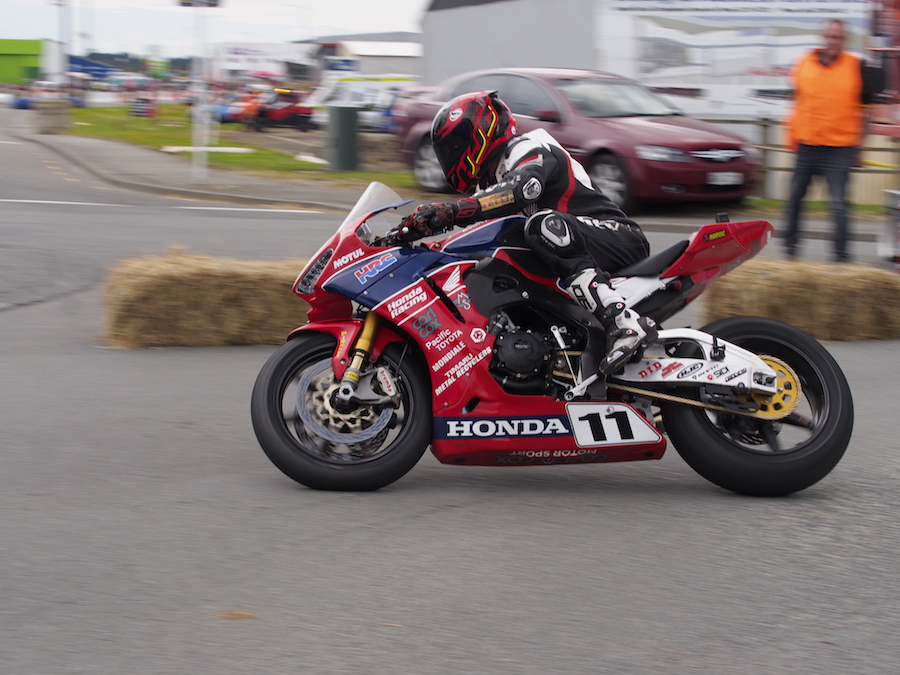 Through his homemade pistons, hand-carved con rods, a sharp wit and shrewd determination Burt Munro unknowingly paved the way for thousands of quick and cunning competitors to race for their own piece of glory on the southern tip of New Zealand’s South Island.

It’s loud, it’s fast and it’s frantic. And that’s just when you’re spectating. For the competitors who are fronting up to six race events in four days, that’s something else altogether.

And I couldn’t think of a better bloke to inspire such an awesome event. 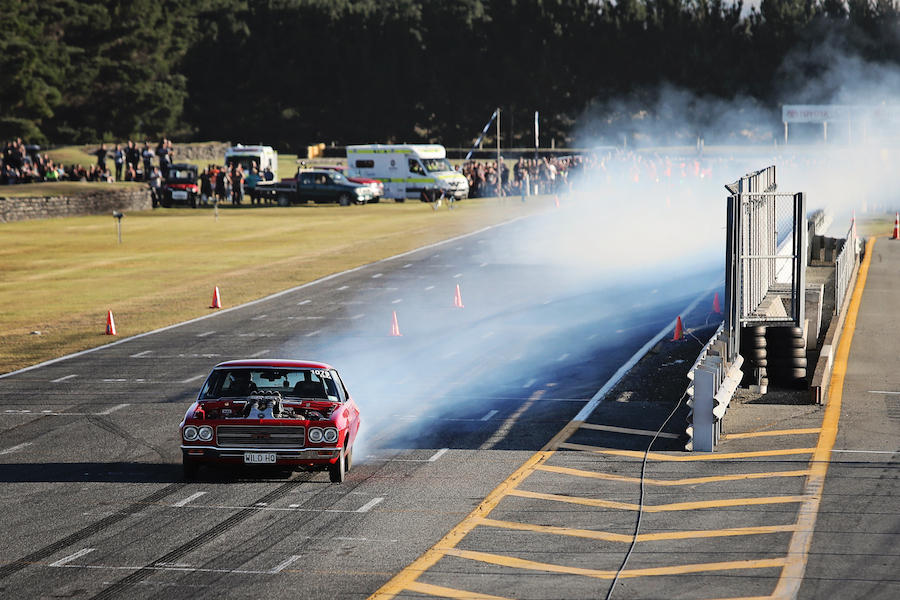 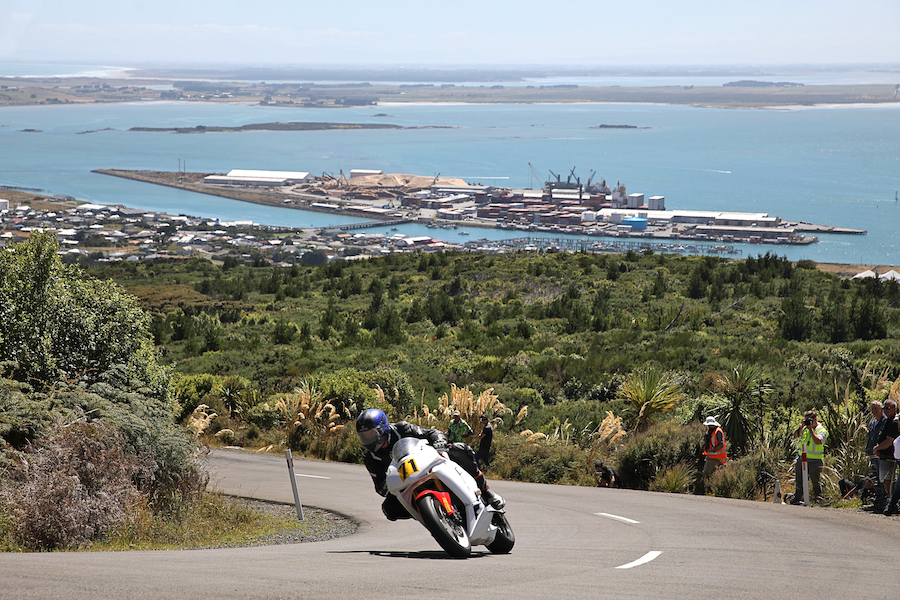