I got my motorcycle licence back in the early ’90s, when it seemed that everything except Harleys had a fairing, and because of this two-wheel upbringing, I love fully faired bikes. I’m getting too old to fold myself onto a sportsbike for travelling mighty distances, but the hoon in me is not dead. These days my priorities are comfort on a bike that can still chase the lead rider up and over a mountain pass on. Oh, and with sexy sporty looks. 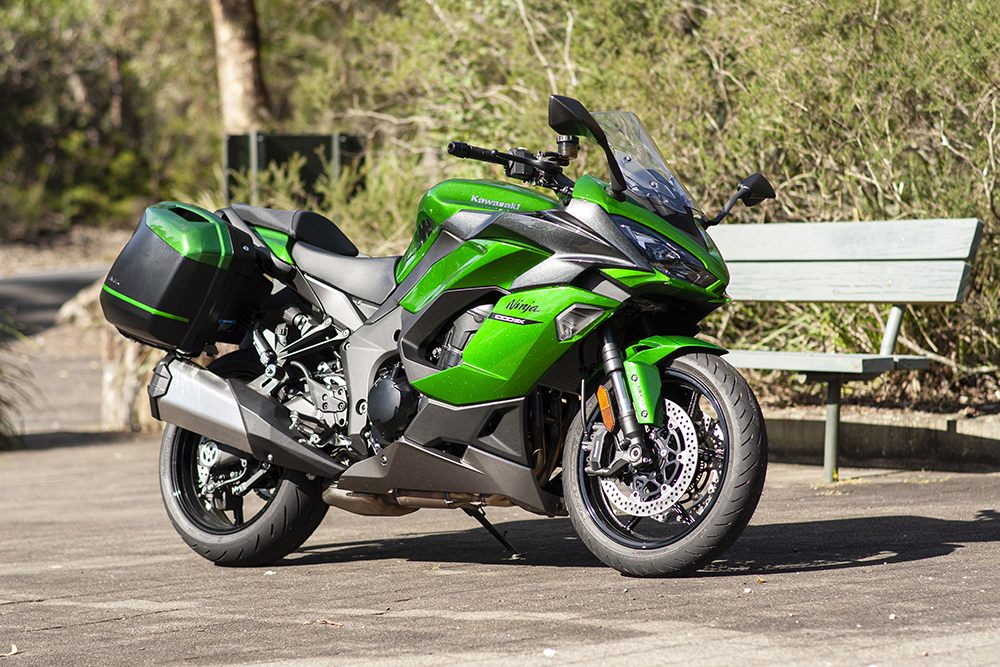 A lot of sports tourers these days look like wannabe adventure bikes with 17-inch wheels; adventure bikes for people that don’t like dirt and for the most part that gangly lot doesn’t exactly scream sex appeal.
If you’re after a fully faired, big-bore sports-tourer these days – especially one that errs more on the side of sport than tourer – your choice is a narrow one. In fact, there’s only three, five if you include Kawasaki’s Ninja ZX-14R and Suzuki’s iconic Hayabusa.
Suzuki offers the GSX-S1000F that we tested in out sports-tourer comparo (AMCN Vol 69 No 19), Ducati has the oh-so snazzy Supersport (AMCN Vol 69 No 12) and Kawasaki enticing with its updated Ninja 1000 SX. But it’s only the Ninja that combines the fully faired, sporty ride with all the modern tech that you’re more inclined to find on its gangly opposition. 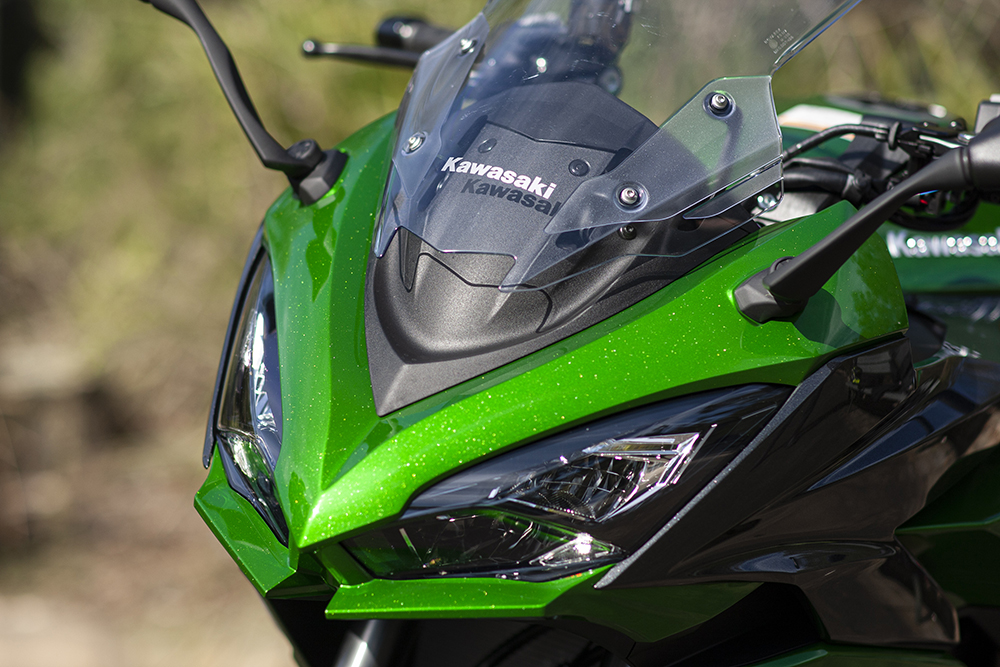 “Wow,” I said to Kawasaki’s marketing assistant when he led me into the carpark to make the acquaintance of Kawasaki’s new for 2020 Ninja 1000 SX. “That paint is awesome.”
The paintwork on the Ninja in the light of day is stunning – pictures I’d looked at ahead of the pick-up did not do it justice. In the metal, it’s metallic and juicy and as good as anything I’ve ever seen.
Once I’d moved on from my ‘oh, look – shiny stuff!’ moment, I climbed aboard the green machine and, in the process, dragged my boot over the lovely greenness of the optional colour-coded panniers – awkward! But with a seat height of 835mm, it’s something you have to come to terms with. That’s a seat height similar to the quasi-adventure Ducati Multistrada and the same as KTM’s 1290 Super Duke GT. It’s a pretty skinny seat, however, and the SX is pretty narrow between the legs, which goes a long way in conserving crucial millimetres of leg length. 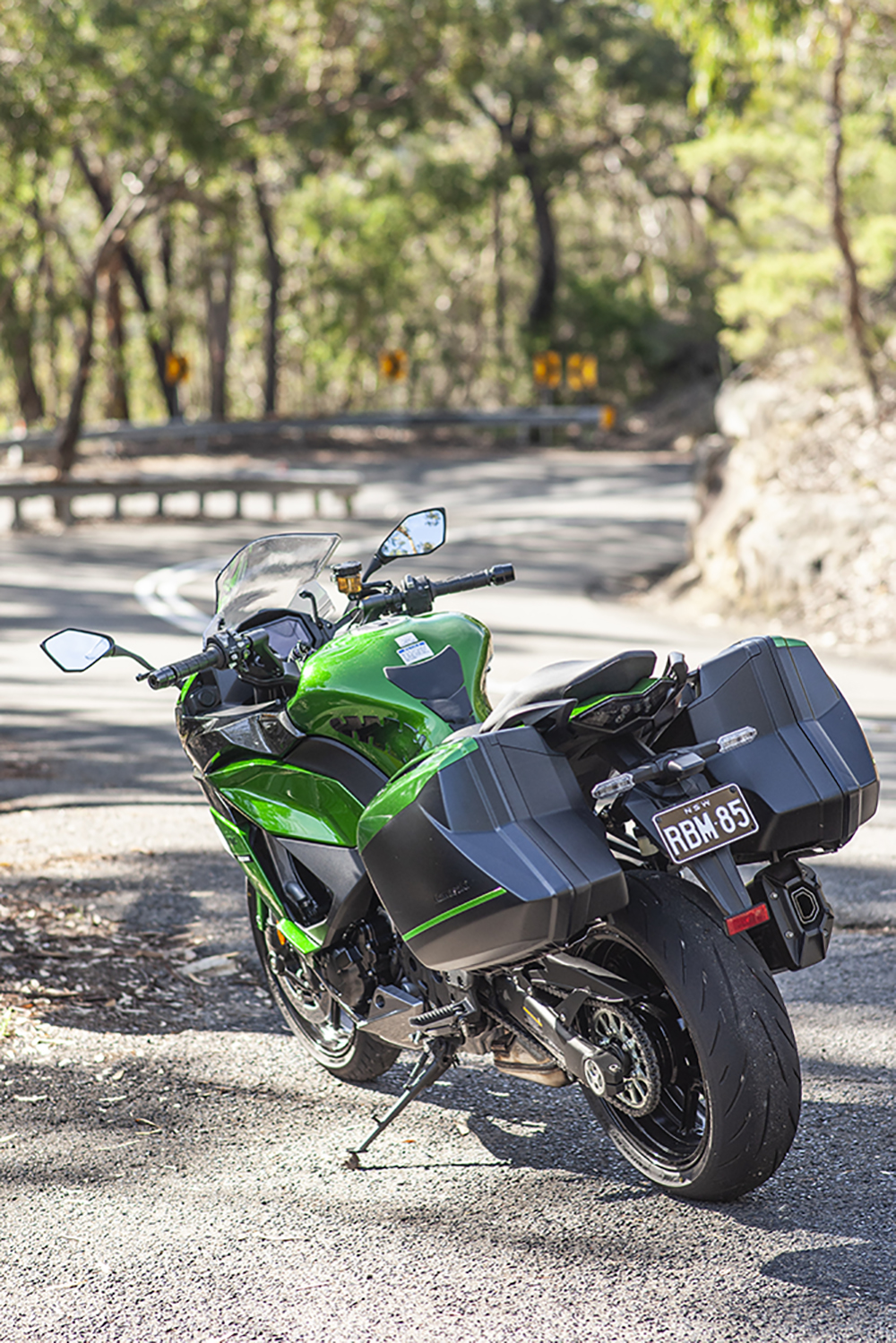 The seating position is on the sports end of sports-tourer, not in that it places weight on the wrist, or that the rider is particularly crouched over. But in terms of leg room, for my 186cm frame, it is a little cramped.
The cockpit isn’t though. There’s now a 4.3” TFT dash in place of the 2019 model’s LCD number and it’s a similar unit to what can be found on a number of Kawasakis these days, such as the Z H2, the Versys 1000 and the Z 900. Like all the new-generation Kawasaki clusters, the SX’s instruments are simple, clear and user-friendly, and they are becoming a firm favourite of mine for their ease of use.
The menu is controlled via a par-for-course switch on the left-hand side and navigating the menu functions is child’s play; press and hold the select button, you toggle through, you select what you want from the menu, you exit out with the reset button. It’s simple, can be done on the fly, and it just works.
The dash also sports Bluetooth connectivity via Kawasaki’s Rideology app. The app gives you access to a bunch of useful info, some of which can be accessed through the dash (like odometer, trip meters, fuel level and range), as well as info that can’t – like journey logs and the bike’s physical location. 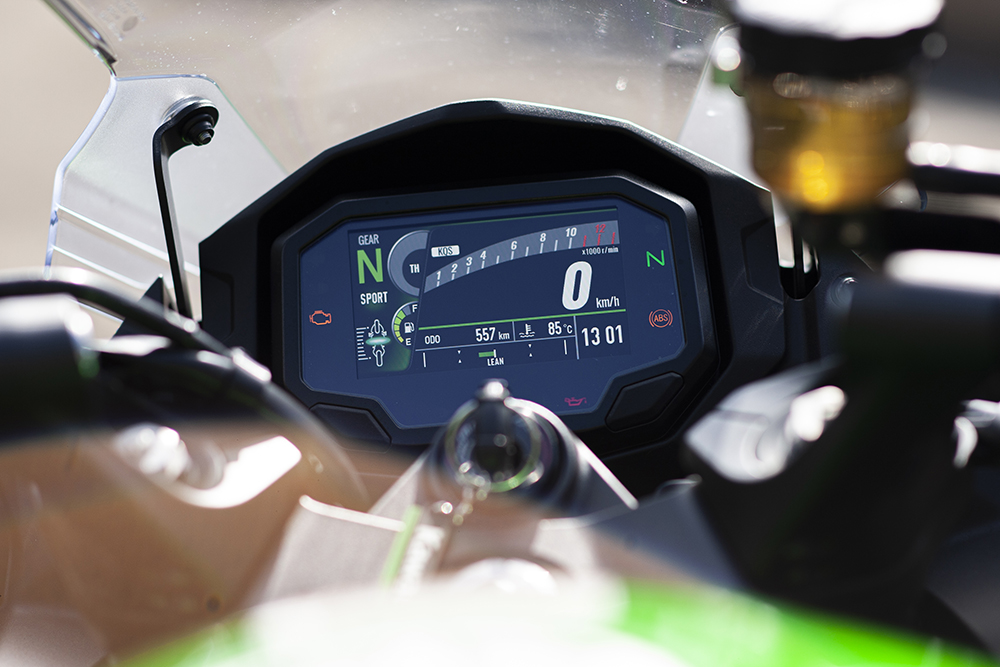 Tucked away just below the dash is a little lever that moves the four-position adjustable screen, and to the left of that a blanked-out spot reserved for DC power outlet – it even has DC stamped in the fairing – although Kawasaki couldn’t find it in it’s heart to fit that $5 part on this particular sports-tourer.
Arcing the Ninja up is a pretty subdued affair; engine noise is minimal and there’s bugger all vibration. Kawasaki have ditched the awkward-looking dual mufflers and gone with a far more handsome and svelte looking single-sided unit that’s ultra-quiet. The throttle is very light and required a bit of conscious dexterity as I rolled out of the driveway.
The 1043cc 16-valve four banger is a carry-over from the previous model and there won’t be too many that will be chasing more stonk from their sports-tourer. The inline four-cylinder engine knocks out a healthy 104.5kW (140hp) @ 10,000rpm and 111Nm of torque chimes in 2000rpm earlier at 8000. In that typical Kawasaki turbine way, the power and torque feel smooth and relentless, there are no sudden peaks or troughs – just fat, flat and seemingly continuous grunt as you punch through the slick, six-speed ’box. 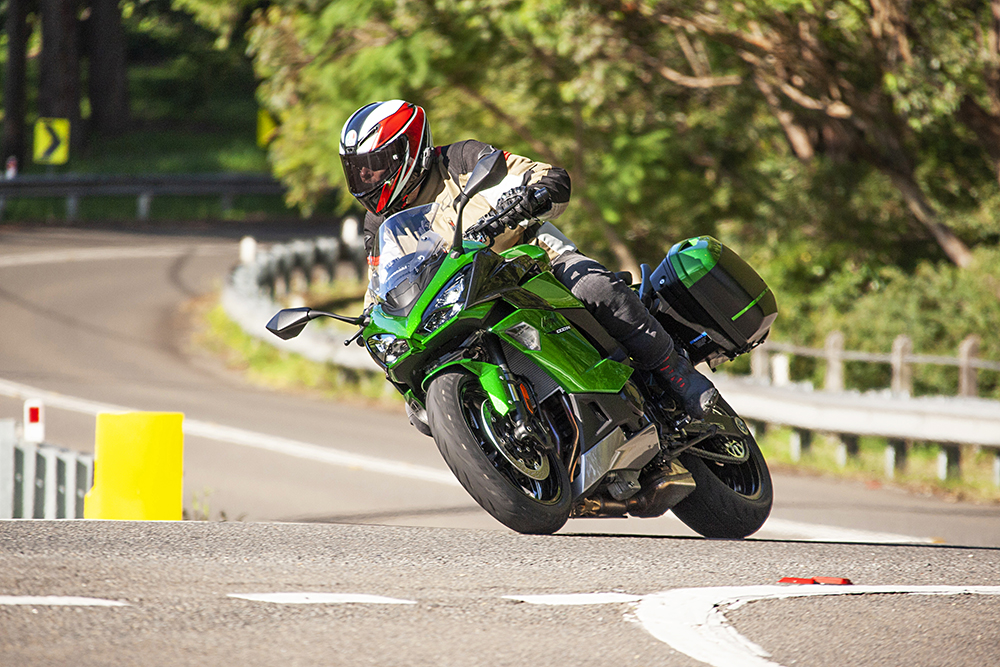 But as generous as that both sounds and feels, there’s something sinister calling you from under the 19-litre tank. It’s a creature that Kawasaki have perfected over the years, and it goes by the name something like ‘sexy as hell, so I’ll keep it wound on’ induction roar, or howl, or growl, or whatever the PR department want to call it this month. Its name matters not, but it’s addictive, it’s awesome and it never ceases to be cool.
The Ninja is also fitted with a bi-directional quickshifter with a blipper function; it’s one of the best I’ve used, and no matter how aggressive I was with downshifts, the rear wheel stayed planted and lock-up free.
There are three preset ride modes to choose from; Sport, which gives maximum power; there’s Road, which gives you full power and a whisker more of the cornering traction control butting in; there’s Rain, that restricts power and winds up the intrusion level on the traction control, and finally Rider mode which lets you customise the power level and the traction control intrusion level.
Traction control was unobtrusive except in Rain mode while on less than perfect roads that feature a liberal splattering of gravel. You get the full 140 ponies in both Sport and Road mode, but Rain mode takes the edge right off, and is very noticeable; uninteresting even. With the fueling and feel at the throttle on the two full power modes being as sweet as it is, it’s a mode that’s perfectly named, as Rain is the only time you’d need to use it. Modes can be adjusted either via the app or the dash while you’re rolling. 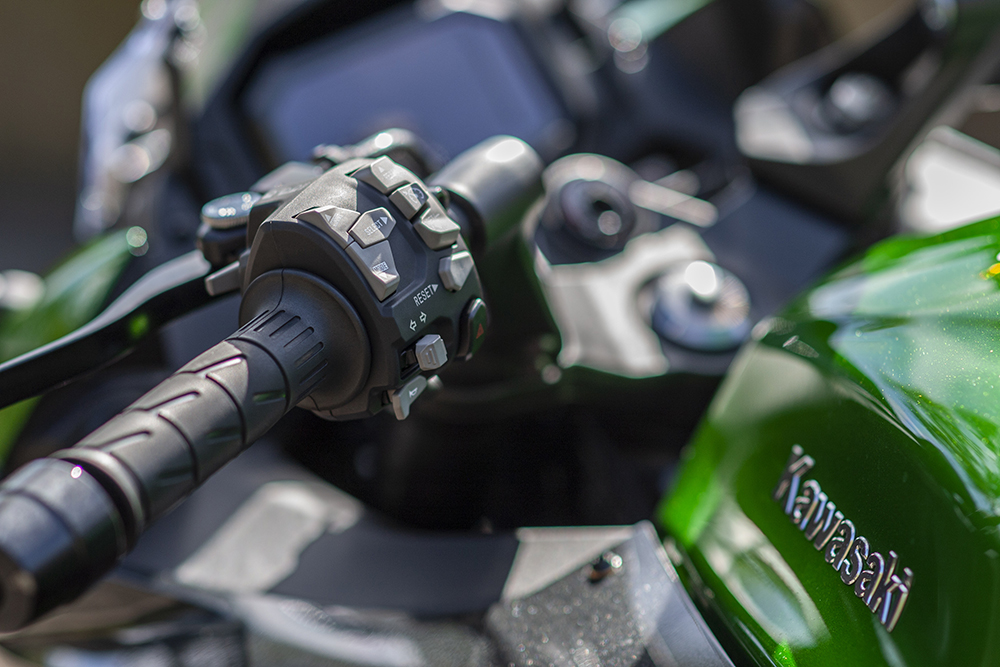 The updated 2020 model gained four kilograms over the 2019 model and now weighs in at a segment-appropriate 235kg, which equates to stability without being cumbersome. Initial tip-in takes a bit of muscle, but once it does start to dip it feels for a moment like its wants to fall over. Of course, it’s not, and it won’t unless you’re a drunken goose new to the game, but it’s an idiosyncrasy of the SX which initially takes some getting used to.
The Ninja runs a twin-beam aluminium frame holding the engine as a stressed member, however the beams of the frame run over the top of the engine, rather than around it as is common. It gives the SX its slim waist I spoke of earlier, but is also partly responsible for its height, and with 19-litres of fuel sloshing around on top of that again, it’s jacked up the centre of gravity, meaning you need more effort on the change of direction.
First impressions after chucking the Ninja into a series of fast corners was it lacked front-end feel. What I soon realised was the factory preload setting in the fully adjustable Showa rear shock was a bit soft for my weight, causing the bum to sit a bit low, unweighting the front end. There’s a convenient remote preload adjuster that’s rather inconveniently mounted between the right-hand pillion ’peg, rear brake reservoir and rear tail unit. 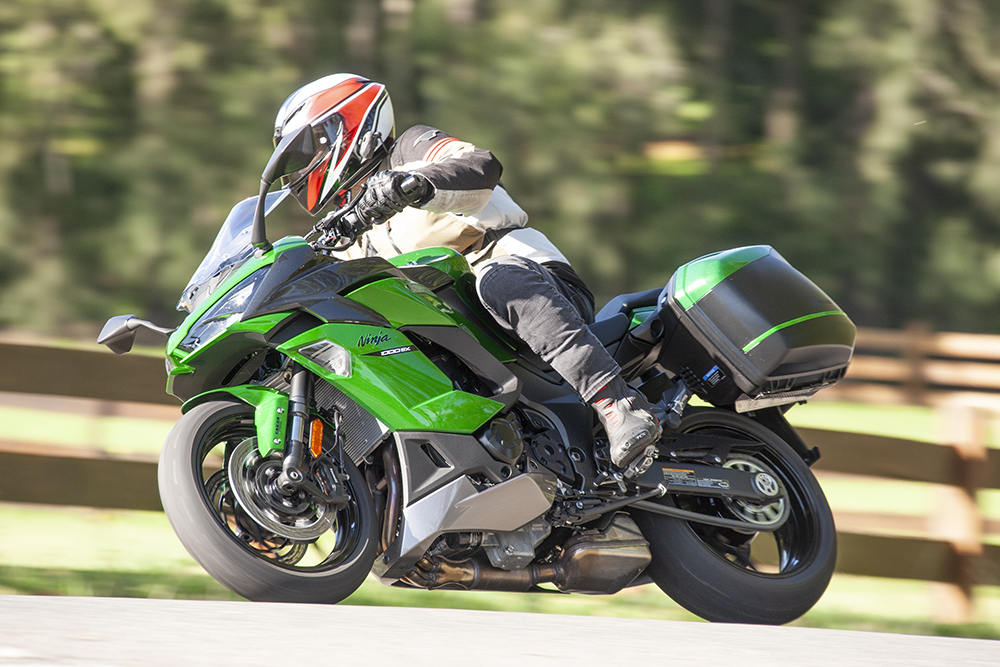 All that metal and sharp-edged plastic shaved bark off my knuckles when I wound on the preload to suit my weight, but the improvement of the feel from the front end transformed the SX from something that felt vague in the steering into an engaging and fun play toy. Once set-up properly, you soon realise that the Ninja is a sports-tourer with a foot and a half firmly planted in the sports arena.
Each time I rode the SX I felt faster and faster, braver and braver and I enjoyed it more and more. The front end is planted and reports what the front tyre is doing with glorious precision.
That feeling is helped no doubt by the 41mm USD Showa fork. It’s a fully adjustable unit, too, although once I sorted the rear end, I had no reason to adjust the standard settings for my rather comfort-orientated 105kg frame. At the end of the fork, you’ll find a set of cornering ABS-equipped monobloc calipers that tear into a set of 300mm rotors. Bite, feel and power; they work brilliantly in every way and are as good as any setup I’ve used in recent history.
Rear stopping duties are handled by a single piston caliper clutching at a 250mm disc and it’s as unremarkable as any good rear brake is these days.
Despite the seat being nothing short of a butt blessing – it’s beautifully shaped, well-padded and there’s even a chunkier version available if you’ve got a boney rump – I only had an hour or so in the saddle before I started to feel uncomfortable. While the seat can do the time, the cramped leg position I noticed when I first threw a leg over the SX raised its ugly head. 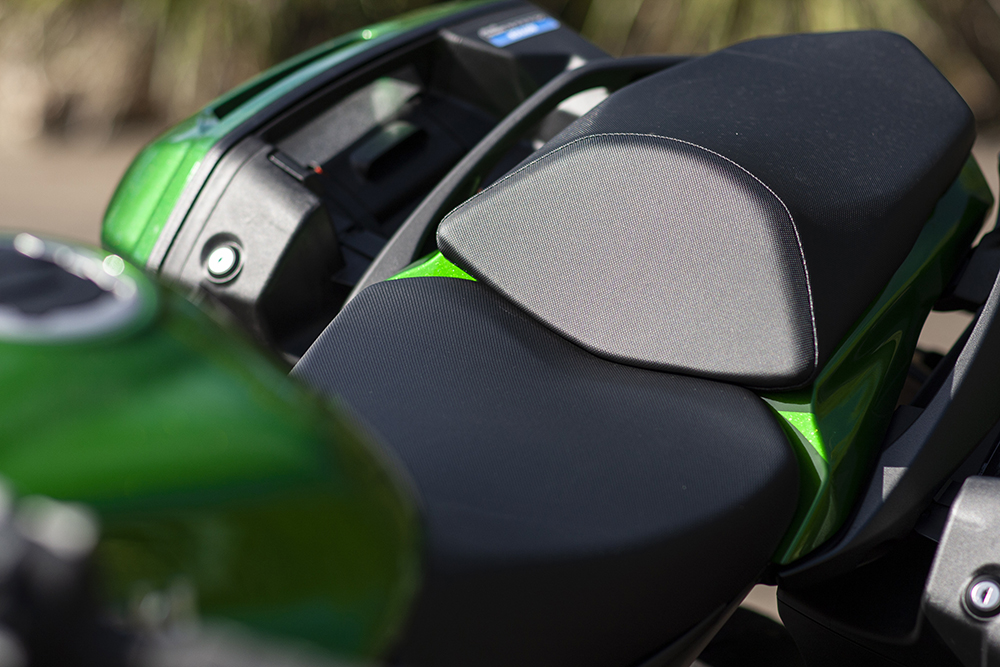 If you’re under six foot you’ll find the lack of leg room a non-issue, but the seat height could be. Then again, if you’re over six foot you’ll find the seat height fine, but leg room may be compromised. Adding to my bent-leg woes was a fair bit of vibration through the footpegs, especially the right hand one, where I felt every bump, bang and road imperfection through the peg.
Once the speed comes up you also notice the effects of the adjustable screen which, at its highest level blew a torrent of air straight at my helmet – but I’m a really tall bloke, average-height riders may not notice this – and at its lowest level it’s as sportsbike low. Kawasaki offers a much larger (and less attractive) screen if you’re a bigger unit wanting to cover more miles with more protection. 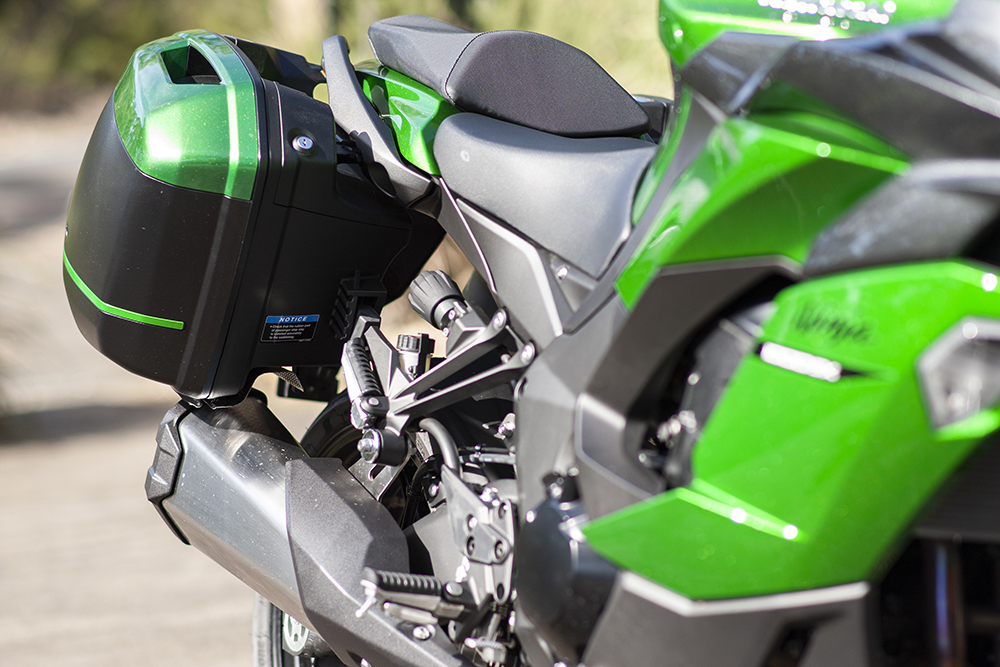 Some parts of the Ninja’s report card might sound a little grim for a touring bike and they are; if it were a touring bike. Don’t let the neat optional colour-coded panniers throw you; the Ninja is a sportsbike with some touring credentials. And once you get that, you get the folded-up legs, and the vibey road report through the ’pegs. Besides, point the Ninja at a twisty section of tarmac and you’ll forget about those niggles, all you’ll want to do is attack corners while listening to that glorious induction growl.
I don’t have the time to ride around Australia, most of my riding is commuting, hitting my local set of corners, throw in an occasional weekend away with mates, and an annual jaunt or two between Sydney and Phillip Island. I want a bike that can still rail a turn, looks like a sportsbike but offers a bit of comfort. And I want it to have plenty of electronic fruit, the convenience of fully adjustable suspension and something I like the look of.
Between the paint job which I found myself looking at for longer than I probably should have and with change out of 19 grand on the road, Kawasaki’s Ninja 1000 SX is a bike that you’ll buy with your head but ride with your heart. 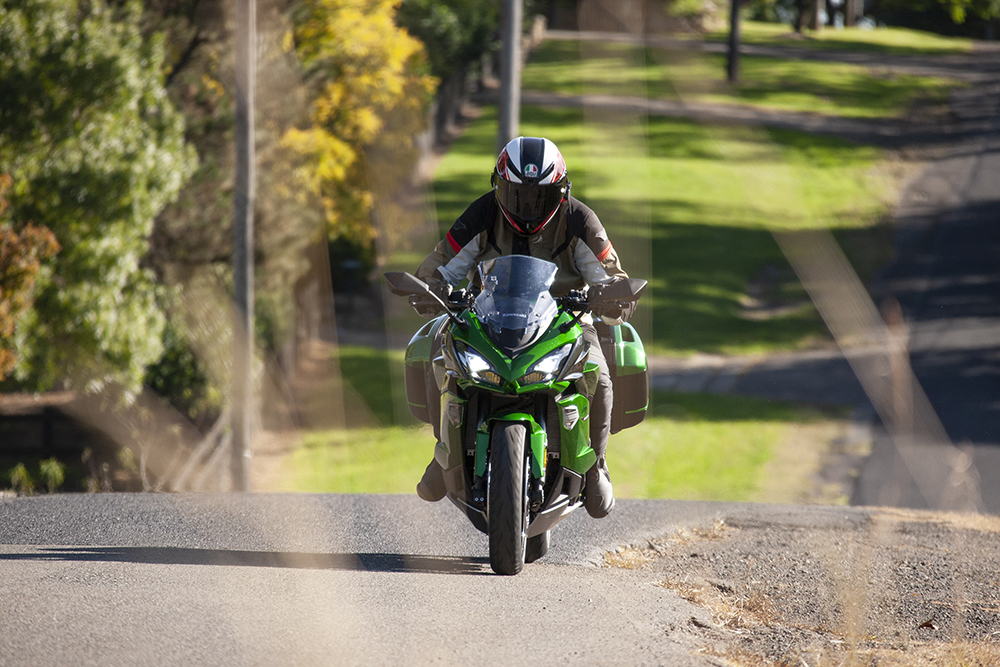