With less power and less torque, can the 2022 Suzuki Hayabusa live up to its modern legend status? Phillip Island can answer that

“It hasn’t rained in weeks, so the rain has made the track slippery as hell,” one of Suzuki Australia’s techs said as I rolled out of pit garage number 49. I don’t know if hell is a slippery place or not, but I didn’t want to find out on my first trip to Phillip Island for a ride around the famous circuit by throwing a bike down the tarmac. And that bike was the fresh Gen III 2022 Hayabusa, a modern icon of motorcycles. So fresh that the new ’Busa had arrived in the country only days before my soggy spin around the Island and it was the only one on the continent. After I’d finished with it, it was to go on show at various dealerships across the country. A wet track, one Hayabusa and a Phillip Island first-timer – no pressure. 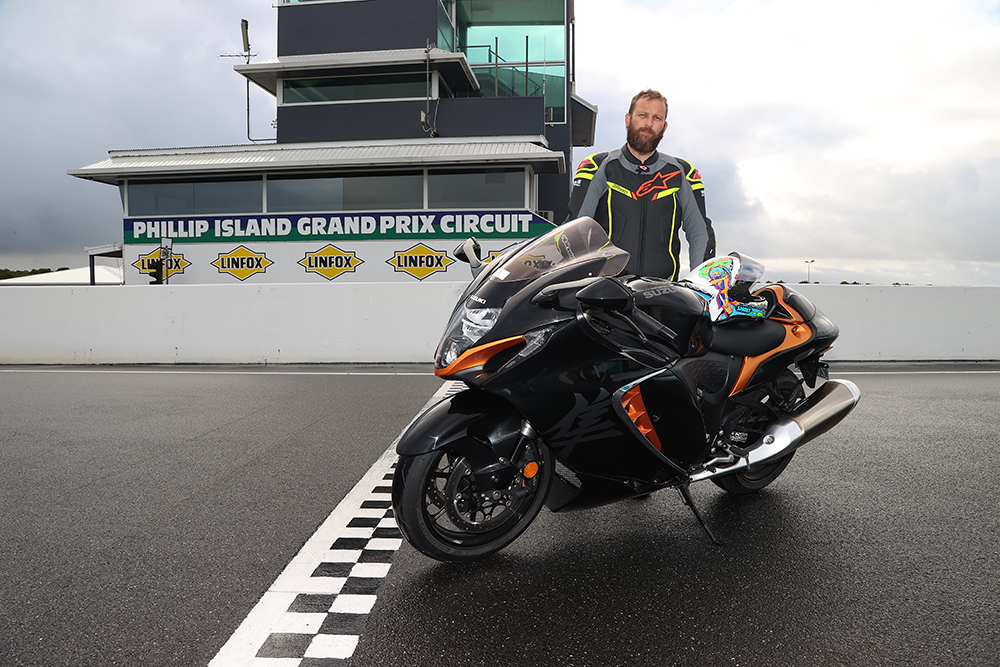 So because Adam Child gave you the tech-laden lowdown on the Gen III ’Busa in AMCN Vol 70 No 20 and Suzuki was good enough to bring a second-generation Hayabusa to the Island, instead of finding different ways to tell you about the same technical upgrades, I’m going to try and explain the stark and subtle differences when jumping between the two.

My first session was on the outgoing ’Busa and I took it very easy on the first couple of laps as I tried desperately to remember the track layout from years of watching racing here, while also coming to terms with 145kW and 155Nm from a 266kg bike with bugger all in the way of electronic aids while it hammered down with rain. 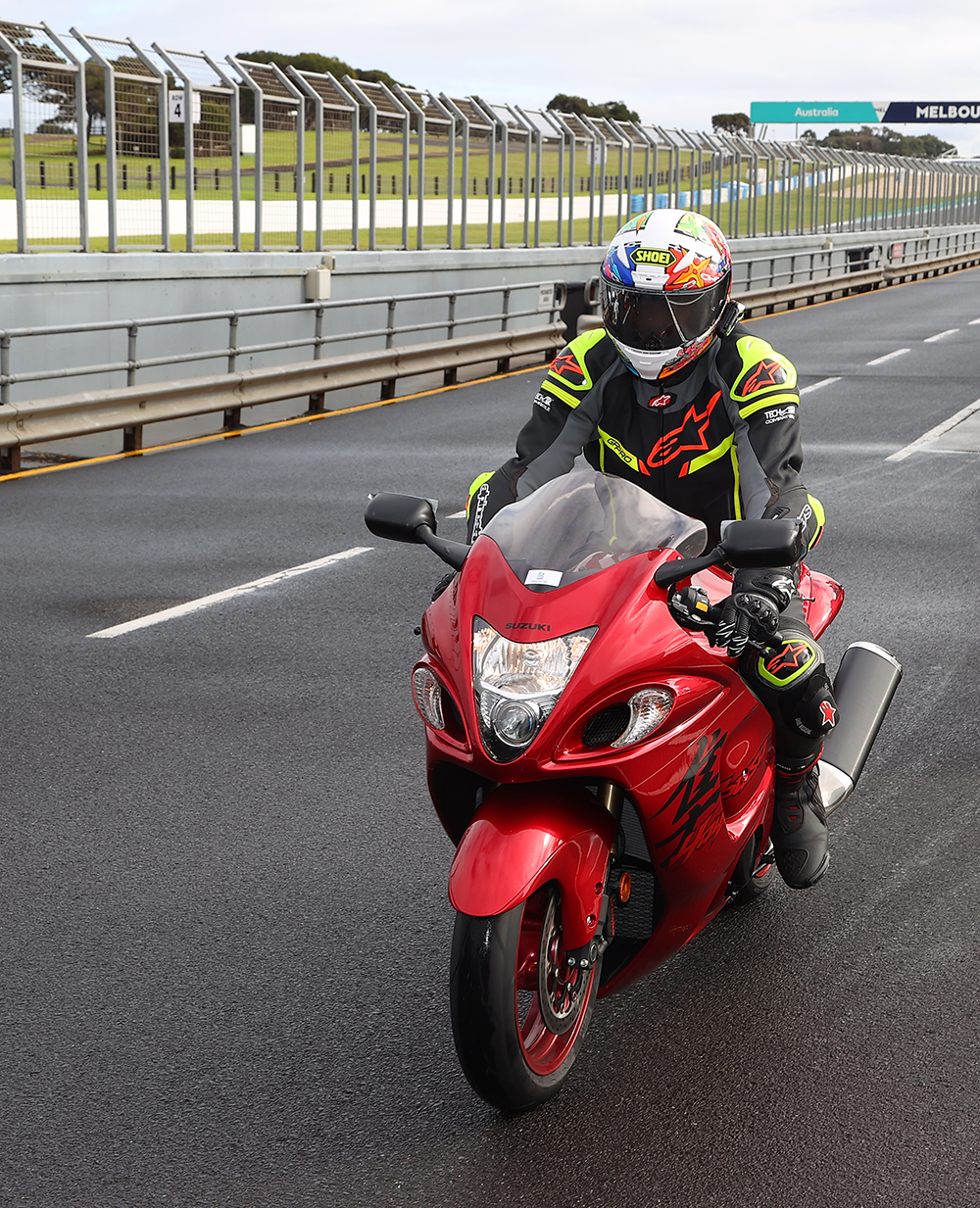 When you’re sitting in the pit garage staring at the large and bulbous Hayabusa you could be excused for thinking that you’ll be doing a lot of muscle work to get the big bus around the track. But those acres of aerodynamically shaped plastics are deceptive. Once you’re seated on the Hayabusa it feels much smaller than it looks and the new generation version even more so.

Even by modern standards, the outgoing bike is still maniacally fast, and handles far better than its physically large size suggests it should. When you chuck it into a corner you can tell you’re on a heavy bike, but in the wet and challenging conditions, being on a stable and well-mannered brute like the Hayabusa is actually not a bad place to be perched. 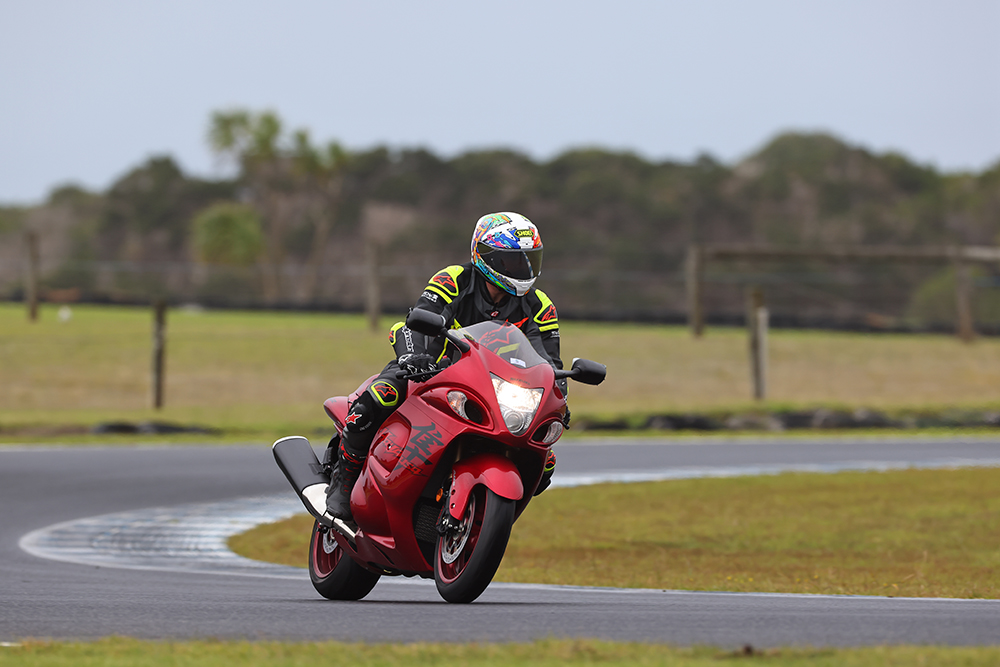 Thanks to the Gen II’s lack of electronic gizmos, getting the power to the ground can be challenge. And knocking it into rain mode takes the zap out of the big girl, which is comforting, sure, but not as much fun – especially when you’re getting smoked down the straight by a gaggle of superbikes.

The Brembo front brakes are showing their age – they still do the business okay, and are certainly better than the Nissin-equipped early versions, but they lack power compared to the current crop of top-shelf calipers from Brembo and Nissin.

I didn’t get a dry session on the outgoing Hayabusa, and it would have been beaut to dial in more of the Busa’s legendary power, but the conditions highlighted how easy the Hayabusa is to get around a track if you can rustle up a bit of finesse. 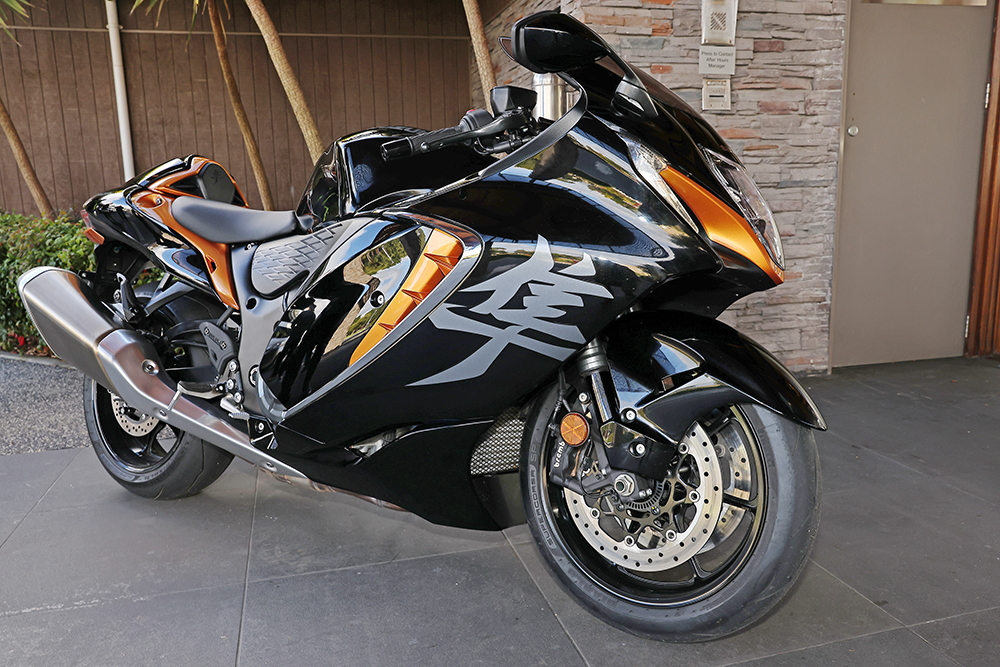 As I entered the pit garage to await my next session in an hour’s time the rain stopped, and a dry line started to form. I took in the new Hayabusa – it looks so much more refined than the superseded bike, the finish is excellent – it’s the level of fit and finish you expect from a $27,690 motorcycle – and I assure you the pictures do not do the new bike justice.

As I rolled out for my first session on the latest Hayabusa, the clouds did what they do best at the Island and by the end of my first lap, the rain started to fall again, erasing the dry line.

The new Hayabusa’s power and torque figures are lower than the older bike’s (140kw at 9700rpm versus 145kW at 9500pm, and 150Nm at 7000rpm v 155Nm at 7200rpm) and there has been a lot of negative talk around that point. I’ll admit that I was a little disappointed to read that when AMCN broke the news – I mean the Hayabusa is supposed to be about obscene amounts of power and a new Busa shouldn’t have less, should it? 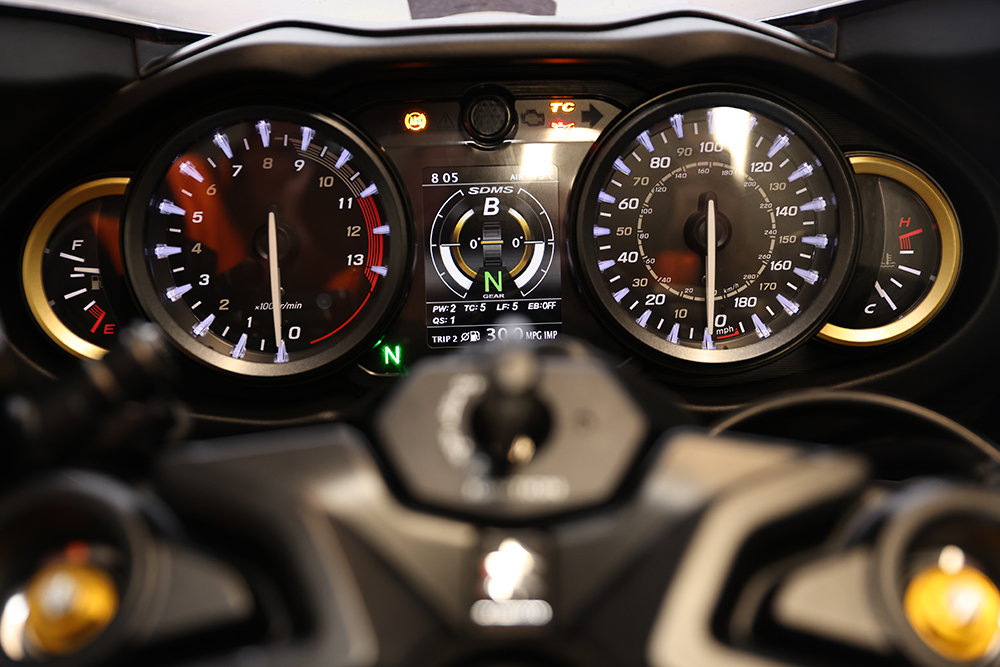 And while peak power might be lower, Suzuki claims that the latest bike makes more in the midrange and, as I ripped out of pitlane and accelerated out of Southern Loop, I could definitely notice the difference. It’s an increase just where you need it on a roadbike.

If you can notice the peak power reduction, then I look forward to following your racing career because in these conditions I couldn’t feel any difference. Still, from a would-be owner’s ego point of view, higher power and torque figures over the old model is kind of a must.

It’s braking heavily for the first time heading into the turn-four hairpin where you notice how much the new Brembo Stylema brakes and bigger 320mm discs have improved the braking performance. There’s far more power and loads more feel, and you’re backed-up by lean-angle-sensitive ABS – and in these sketchy conditions and on the only example in the country, that’s worth every dollar over the outgoing model alone. 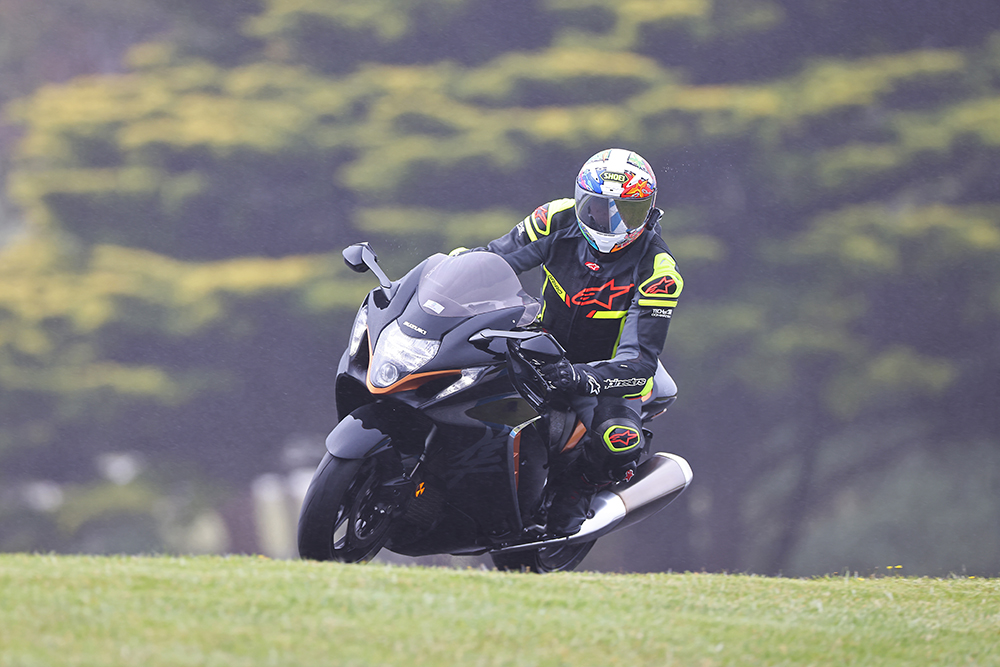 I also took a short road ride where every wallaby and cantankerous goose on the Island seemed to dart in front of the big ’Busa, and it cemented just how responsive and powerful the new anchors are and how the Bosch IMU’s computing power can keep you from being that guy who dropped the only generation III Hayabusa in town.

The ’Busa now features a full suite of electronic wizardry, with multiple ride modes, launch control, engine braking control, cruise control and hill hold control. The cornering traction control keeps the rear tyre in check as you accelerate hard out of Siberia allowing the rear to slide without getting out of control and it’s especially reassuring as you fire over Lukey Heights. It’s a proper modern system and I felt way more confident pushing on the latest generation than I did on the Gen II. It keeps you in control in a smooth and predictable way, which is exactly what it should do. 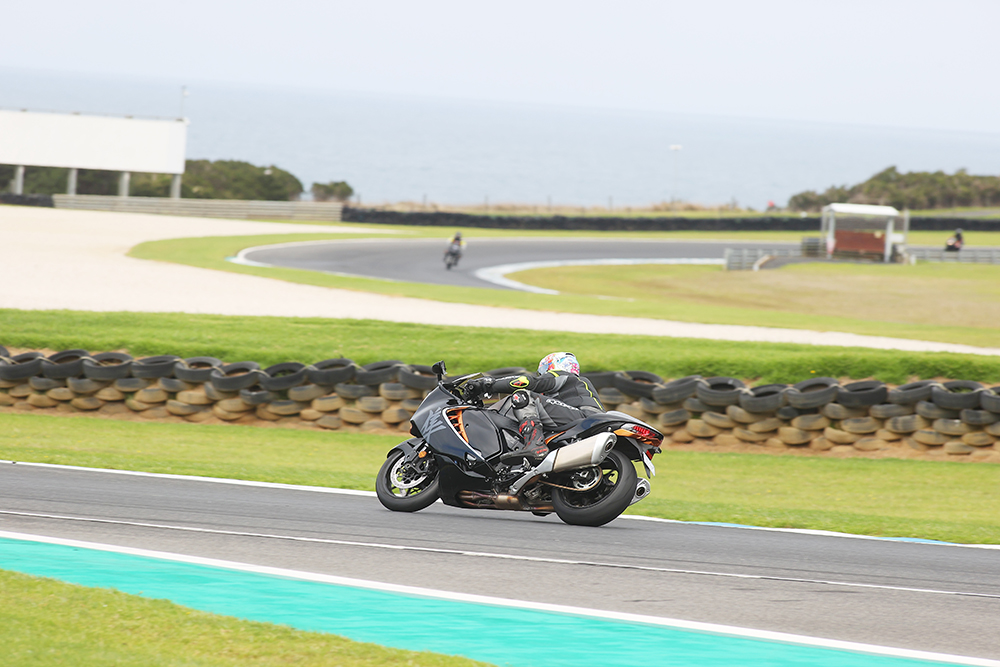 And the confidence is not only inspired by the electronics. Although the frame remains essentially the same, geometry changes and updates to the fully adjustable KYB suspension have conspired to create a more stable, yet lighter feeling and more flickable Hayabusa. This was especially noticeable as you head down from Lukey Heights and pitch the bike on its side to gingerly negotiate the turn 10 hairpin.

The new bike isn’t just better in the slow-speed stuff, though, it’s even better in fast turns where the outgoing bike – and especially the first-generation version – required a great deal of muscle to turn in or change direction mid corner. Its increased nimbleness and stability are very apparent as you round turns 11 and 12. A stab at the left-hand ’bar gets the ’Busa turned, and it’s absolutely rock solid as you power onto the straight and let the 1340cc four-cylinder engine have its way, rear tyre squirming until you’re back upright and on the middle of the tyre. 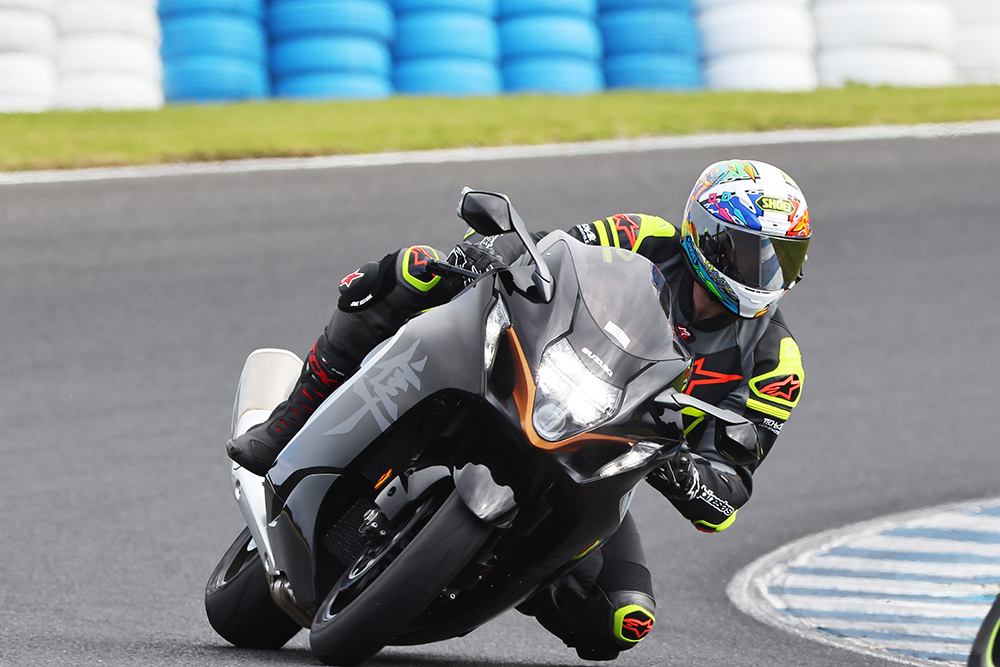 The engine has been extensively updated, but it retains that trademark Hayabusa/GSX-R rawness. There’s no lack of power and you make ground on the litre bikes until they build revs, then they move ahead until the Busa’s aero package comes into effect and you start to reel them in. By then it’s time to tip into turn one and it all starts again.

I’ll confess that I’m a total fanboy of both the first- and second-generation Hayabusas. Am I biased? No; if anything my expectations of the new model were higher because of that. I was disappointed when I saw the latest offering makes less power and I really, really wanted it to have a turbo lashed to it, but the truth is it’s got more than enough power anyway and makes better use of what it does have due to its fancy new electronics.

On top of that, handling and braking have improved and it’s a well sorted, modern and stylish Hayabusa fit for a new decade. 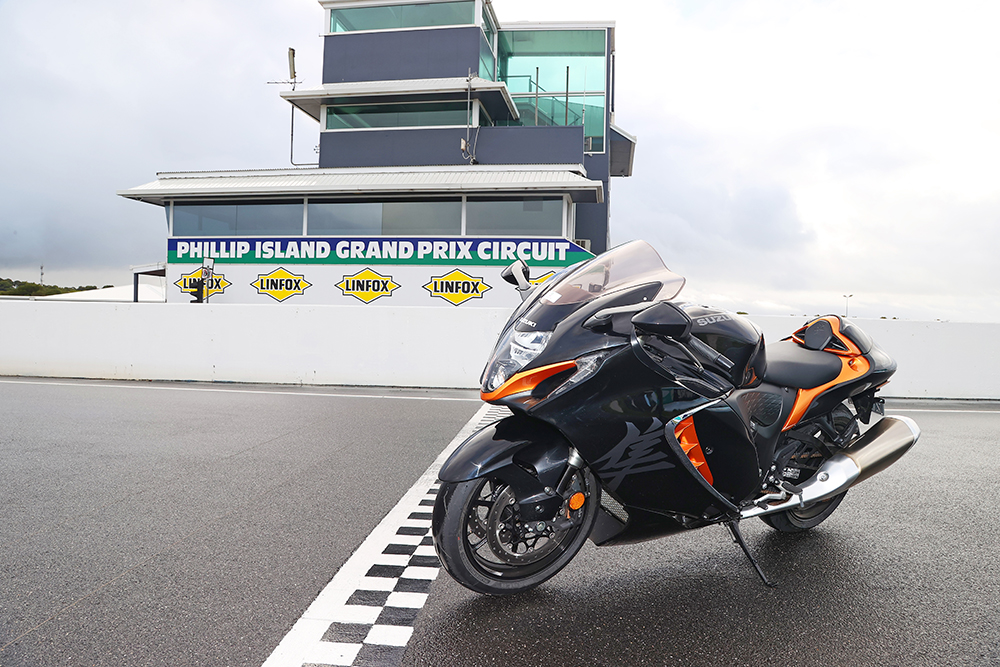