In what’s one of motorcycling’s quickest growing categories, can KTM’s 1290 Super Adventure R maintain its reputation towards the top of the heavyweight tree? Let’s find out

These days an adventure bike should be excellent both on the road and off it, right? They should, but the reality is most adventure bikes have a road bias that’s pretty easy to recognise the minute you drop off the tar onto the dirt. KTM’s 1290 Super Adventure R has gained a reputation for having excellent dirt manners while also boasting a sizeable ability to carve up the blacktop, and in 2021 it received significant updates. So significant in fact that KTM is claiming that 90 percent of components are new or revised. And some of them, such as adaptive cruise control, are aimed at making the 1290 a better road mount.

With 39 years of experience riding dirtbikes – enduro, hard enduro, trials and five Finke Desert Race finishes – I’m in my happy place when riding off-road and I had everything crossed that KTM hadn’t forgotten about improving off-road credentials as it strived to make the 1290 Super Adventure R a better roadbike.

And I’m relieved to report that while the 1290’s road manners and equipment have improved, it’s also become a better off-road machine. 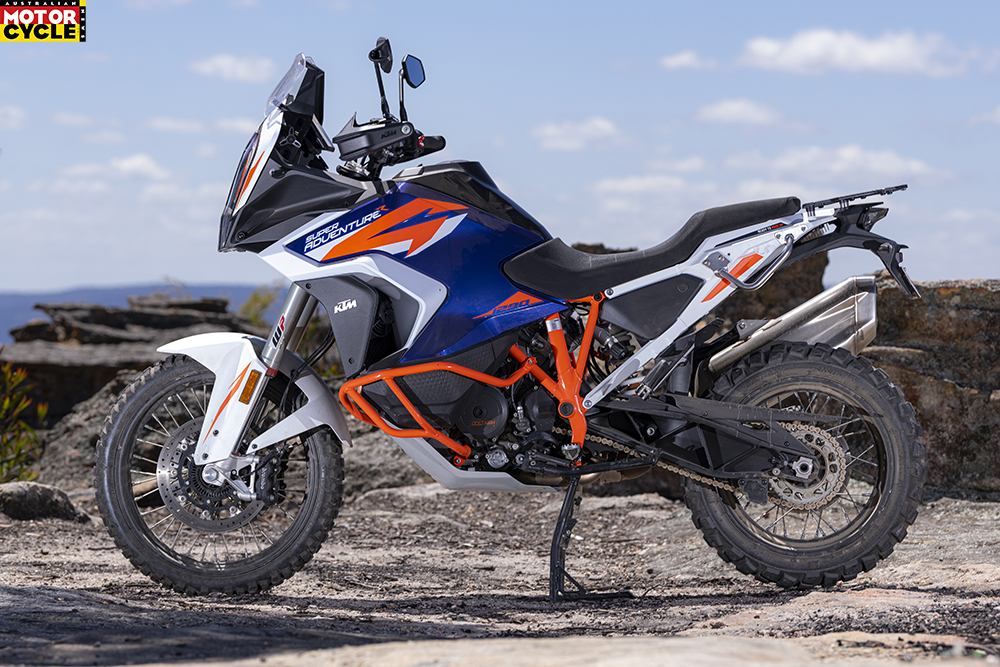 The 1301cc V-twin powerplant now meets Euro 5 standards but hasn’t suffered a loss in performance as a result. Retaining its 118kW (160hp) of power and 140Nm of torque, the LC8 engine is as hellbent as ever to make the world hurtle past at warp speed. It is a seriously potent motor on or off the road and brought a huge grin to my face every time I fired the beast into life. There is almost no vibration felt through the ’bar or footpegs, and that’s even with the anti-vibration rubber inserts removed. 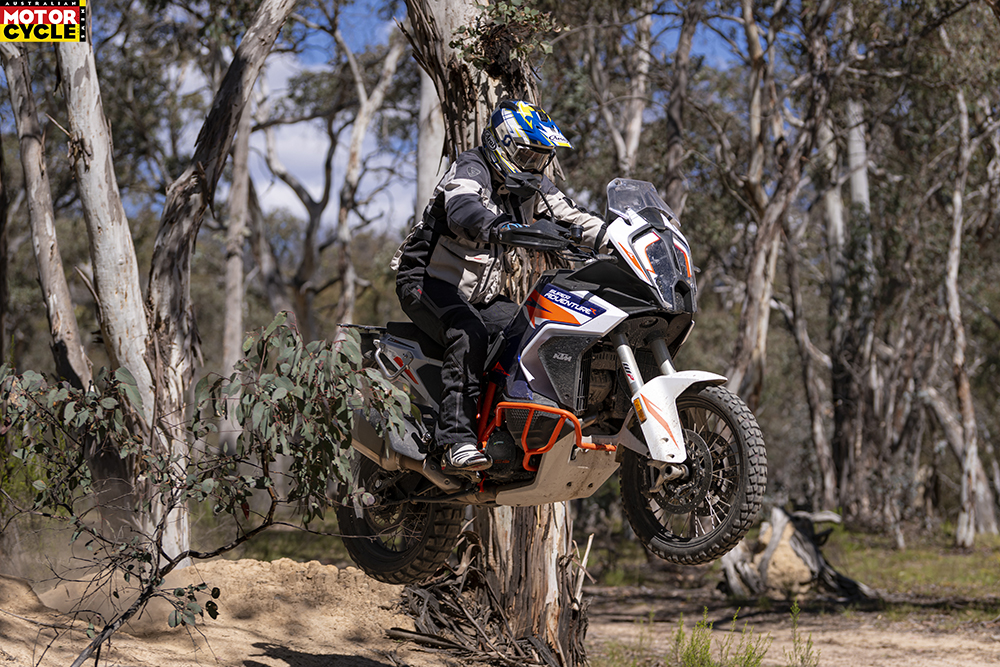 The hydraulic Magura clutch is almost as light as KTM’s EXC enduro range, and the quickshifter works beautifully (although I’m old-school and I’d be happy without it). The six-speed gearbox is slick, but the gearing is a bit tall, and I reckon I’d go two or three teeth bigger on the rear sprocket just to make it a bit easier to live with. At 110km/h in top gear the engine is revving at just below 4000rpm – it still pulls like a train in the upper cogs, but in day-to-day riding you will rarely see past fourth gear. 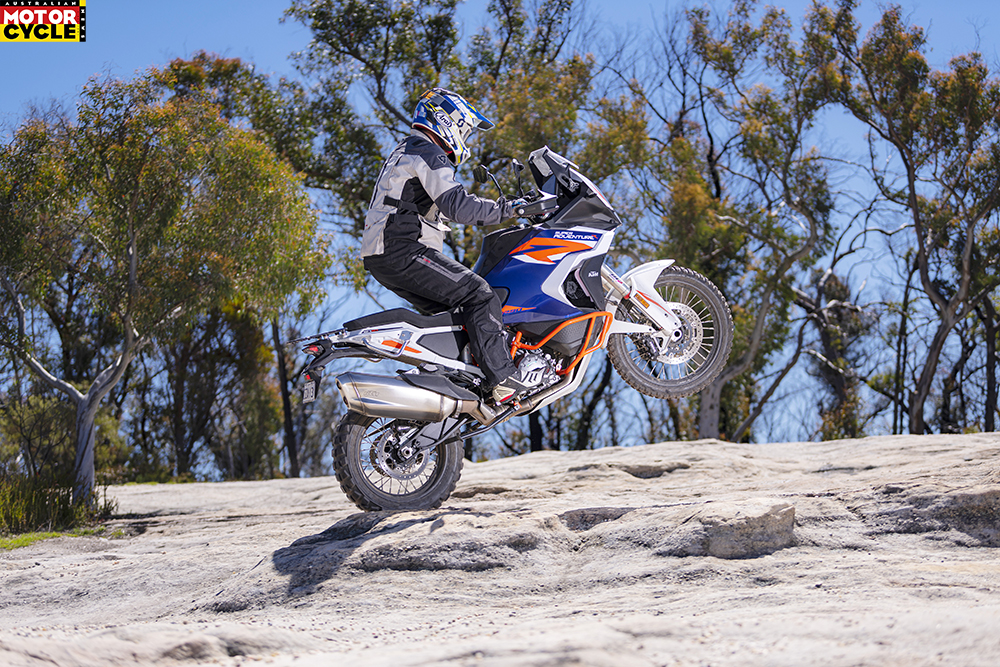 The new twin-radiator design allows heat to disperse directly behind the thermo fans that adorn each side and is a vast improvement over its predecessor. Not once did I feel even the slightest amount of heat radiating from the almighty powerplant below.

I’m not the biggest fan of some modern rider aids but the switchable lean-angle-sensitive traction control, which has four modes and 10 levels of intervention, gets a serious workout and it does a fantastic job of doing its best to minimise wheelspin. When turned off or dialled right down, the off-road orientated rear Bridgestone is destined for a very short and brutal life. 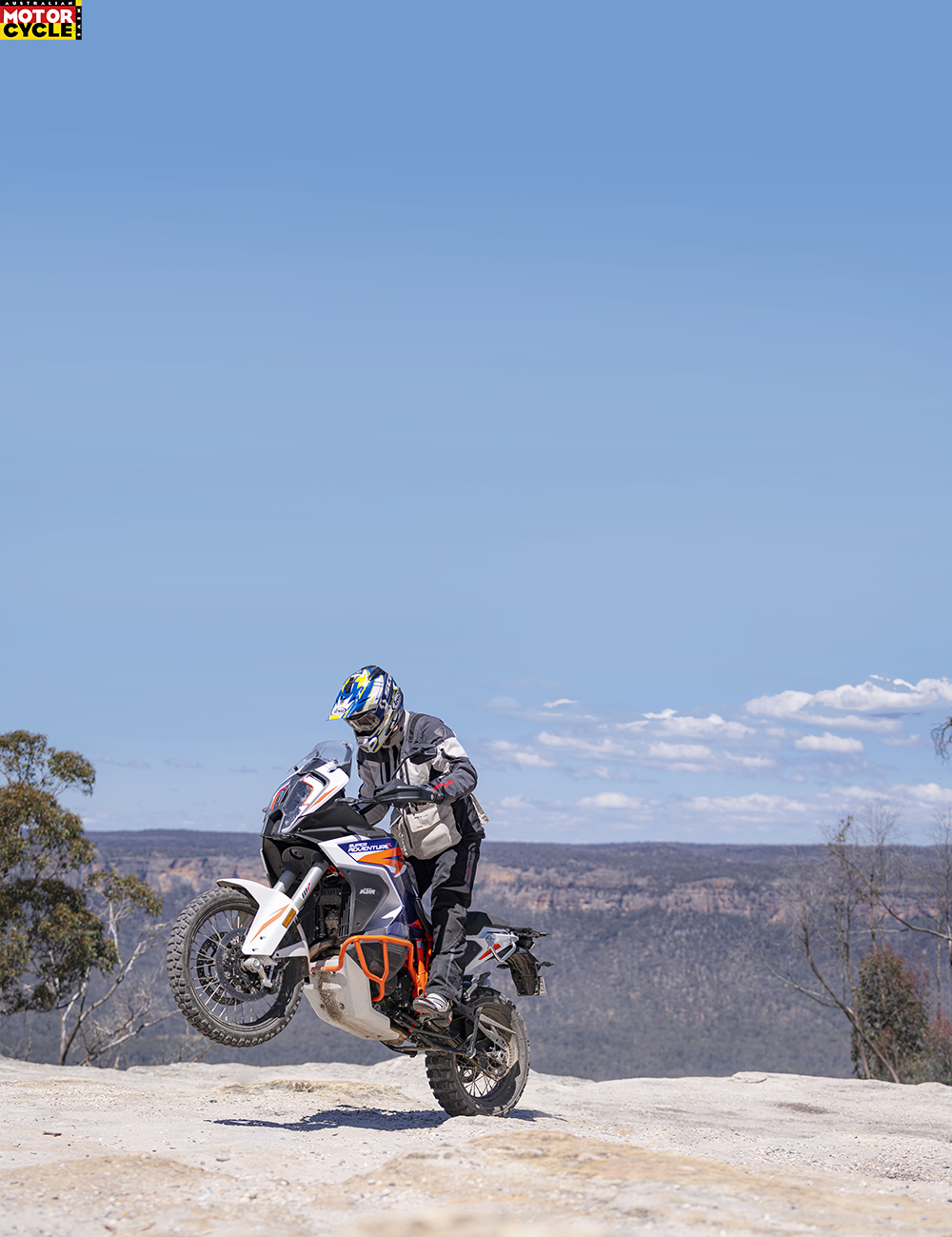 The KTM is packed full of the latest technology. As well as four ride modes (Rain, Street, Sport and Off-road) all easily changed by backlit buttons on the left-hand switchblock, there are almost infinite combinations to tailor the way this bike behaves via its electronics, and it all works very well indeed. 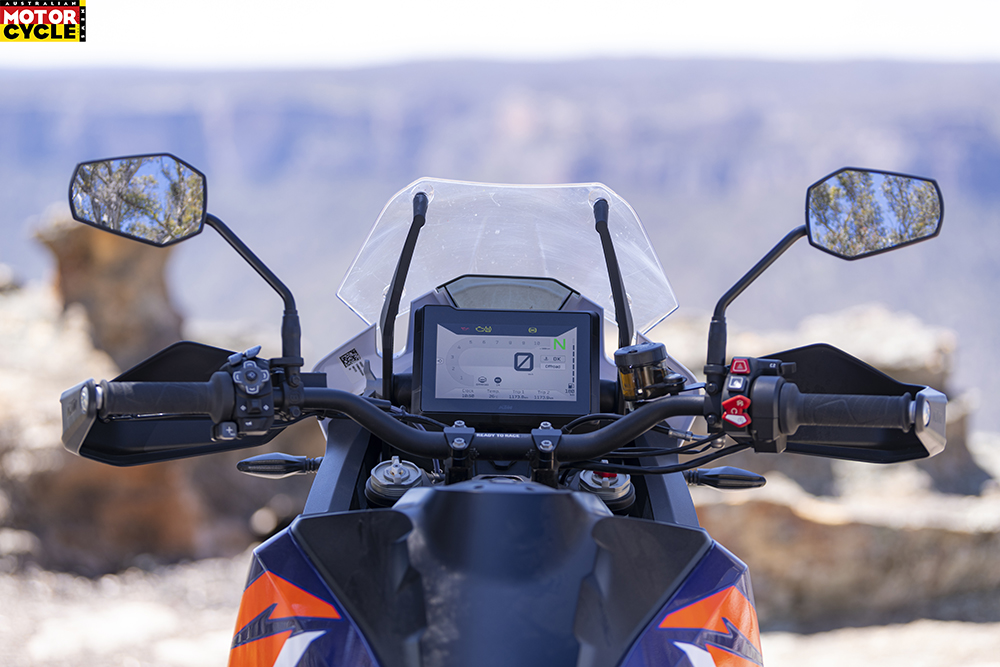 Each riding mode offers a distinct characteristic to the engine with rain and off-road being the most noticeable. The cornering-ABS-equipped Brembo braking system can be customised as well, and the rear ABS can be turned off in any mode, but the front will always remain on. This is great for sliding around on the dirt when setting up for a corner, whether it be at high or low speed. 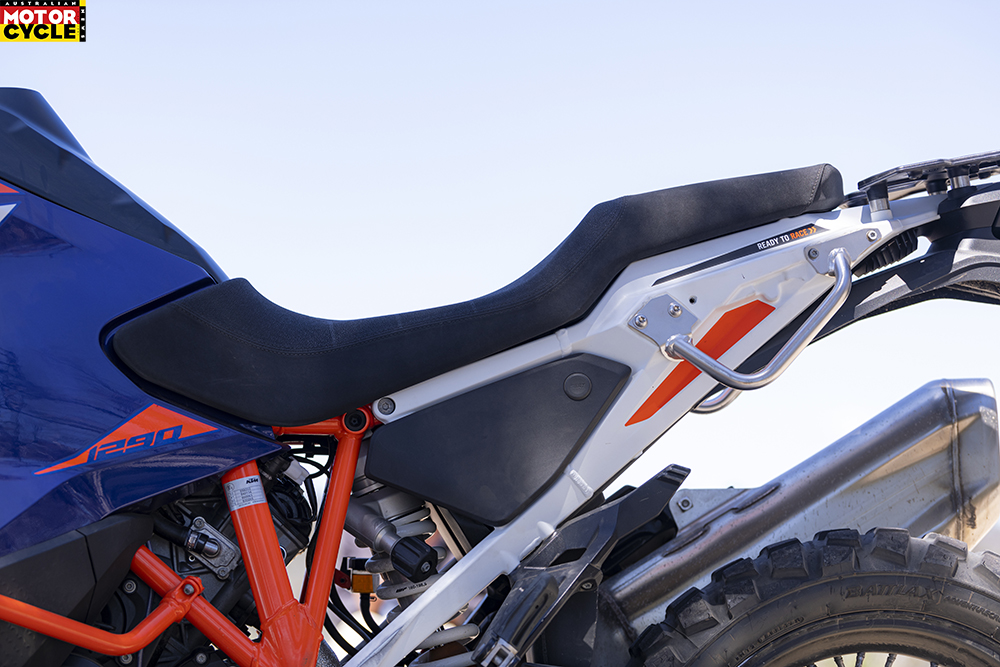 All modes can be customised in levels of traction control and wheelie control, and when in Off-road mode, the ABS is turned off on the rear wheel and the engine output is reduced to 100hp, which is roughly what a Honda Africa Twin makes at full power. 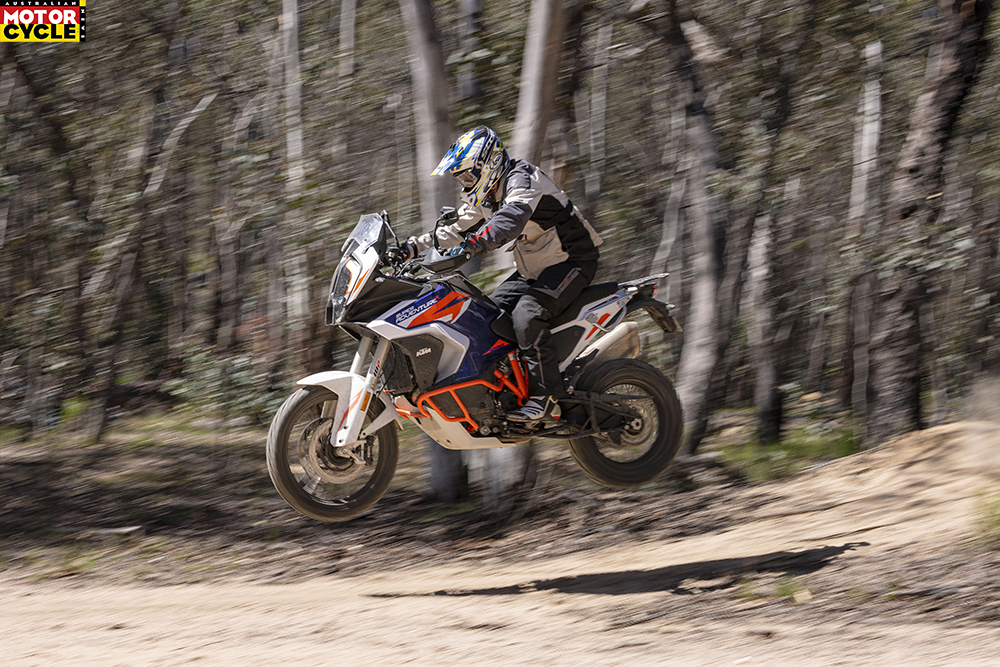 A 221kg, 160hp bike can’t be that good off-road, right? It wasn’t that long ago that superbikes were claiming those numbers. Wrong! I spent a fair bit of time on the previous 1290 Super Adventure and was really impressed – this latest model left me almost speechless. With revised steering geometry, a lower centre of gravity courtesy of where the fuel is stored and a host of re-valving, spring rate changes and updates to the WP suspension, the new 1290 is simply brilliant off-road. And believe me, I pushed it. 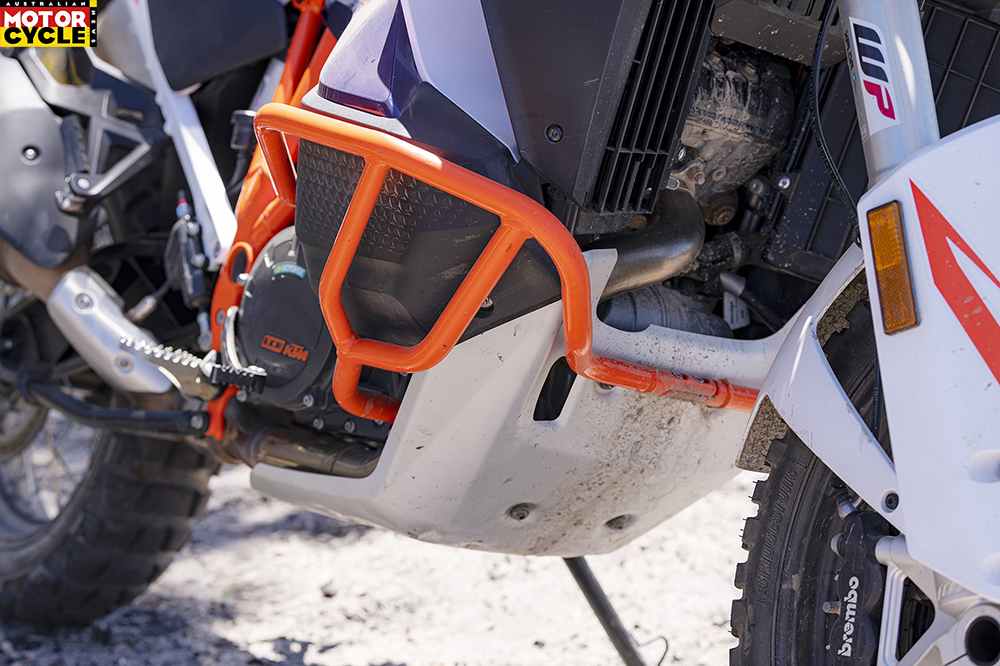 Taking the time and playing around with the preload, compression and rebound damping settings on the fully adjustable 48mm WP XPLOR upside-down fork and PDS monoshock makes a noticeable difference in the feel and performance, and is worth doing, too, as it’s a super-easy process. 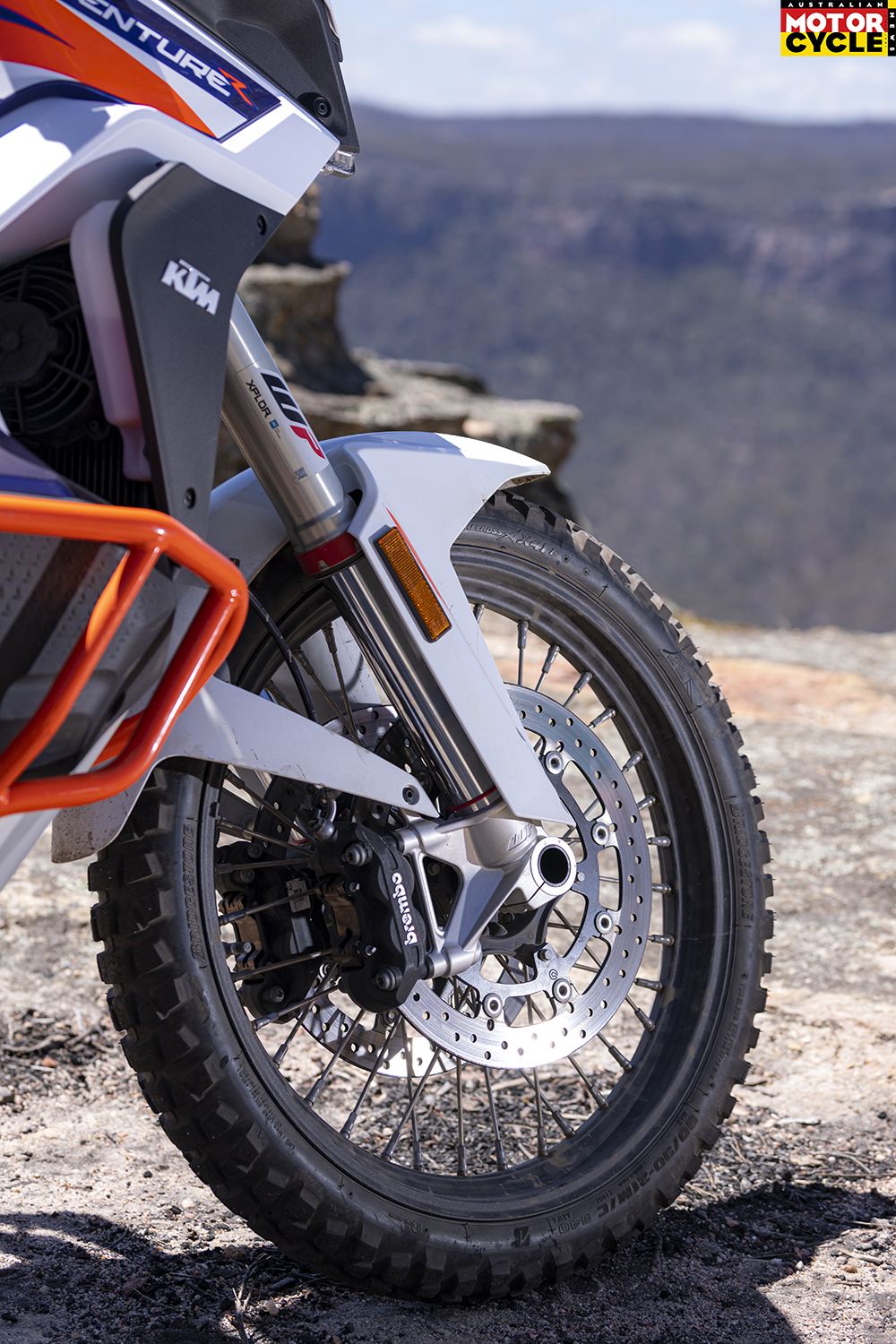 Suspending a bike this size that can generate so much speed so quickly is no easy feat, but KTM has nailed it. Fast fire trails are demolished, logs and rocks can be tackled like you’re on an enduro bike, albeit a bloody big one, and it gives a sense of confidence that I have not experienced on any multi-cylinder big-bore adventure machine. It tracks straight with minimal deflection which is helped by the speed-sensitive WP steering damper. If anything, I felt the fork slightly outperformed the shock, but like I mentioned, if I spent a bit more time playing with the clickers, I think I would’ve got it just right.

The 18-inch rear and 21-inch front wheels feel at home on the dirt. In my opinion, 19-inch wheels found on some other brands don’t feel anywhere near as good when the tracks start to resemble something where a rock wallaby would be hopping about. The 1290 is a big bike that requires and responds well to definitive rider input on the dirt – you just can’t let a big adventure bike dominate you, or it will end badly. 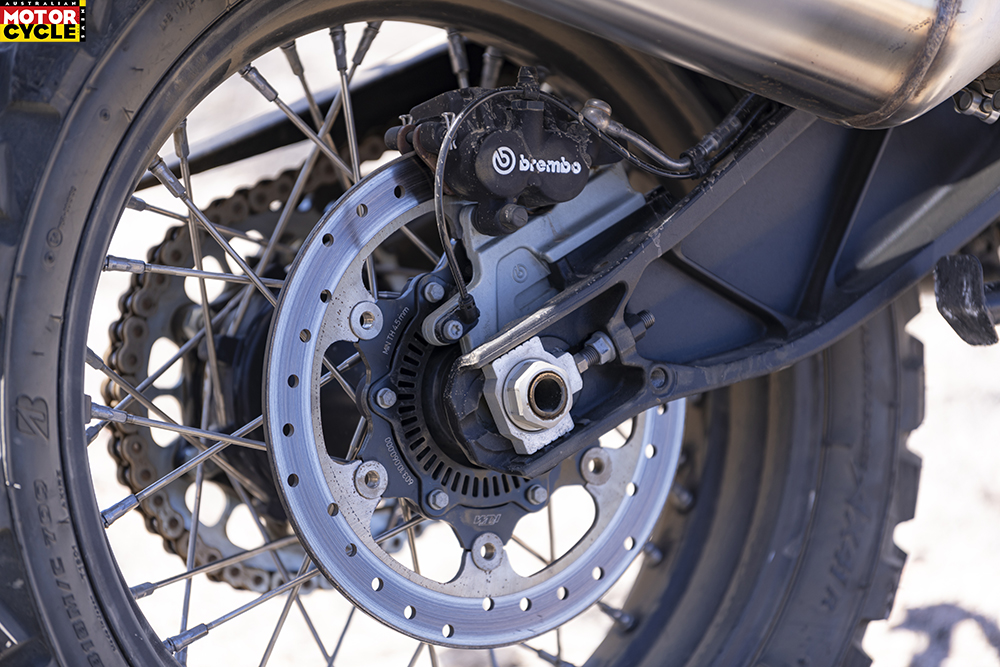 The fact that a bike this good off-road can be so composed on the road, especially when you consider it’s riding on an 18-inch rear and 21-inch front, is impressive. Compared to adventure bikes running 19-inch front wheels, some agility on the road is lost, but I have nothing but praise for the front given what it is and what it’s designed to do, and it gives the R a more relaxed feel on the tar as it slows down initial turn-in. Once settled into a fast sweeper though, it holds its line and is far less prone to misbehaving when you come across nasty potholes or bad road surfaces. Another advantage of the wheel size combination is the variety of tyres available, whether you intend to hit the dirt, the road or both. 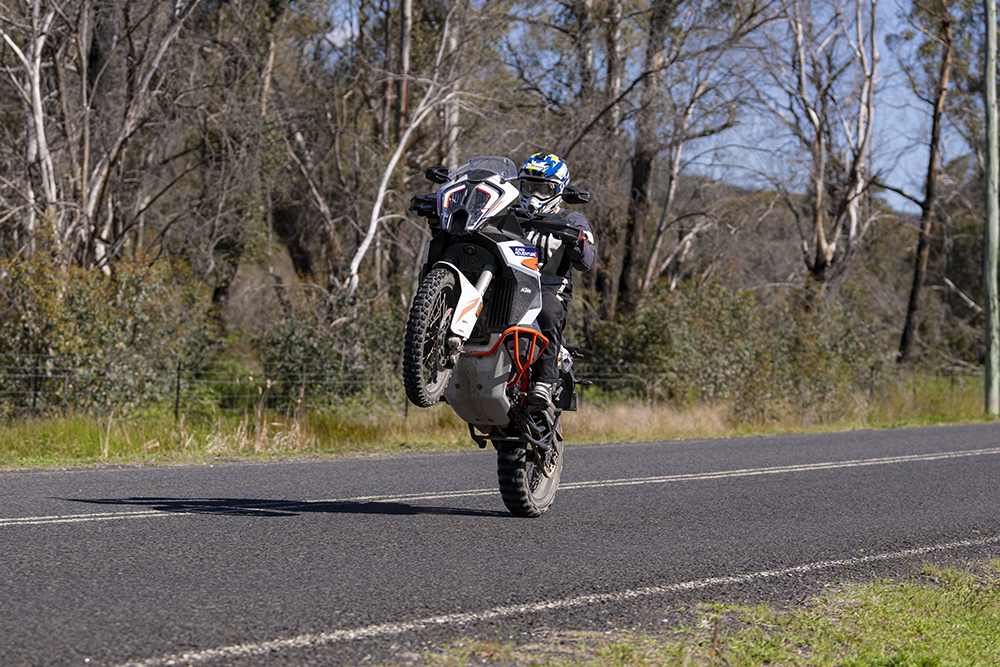 The Bridgestone Battlax Adventurecross tyres fitted to the test bike are very good but be prepared to start a separate bank account for rears if you’re going to run a more aggressive off-road tyre like this – spirited dirt and road riding on this beast will easily hammer one in less than 2000km. The front was very good on all surfaces and even when pushed hard on the bitumen it didn’t squirm around too much, and didn’t seem to give much away compared to a more road-orientated tyre under heavy braking either. 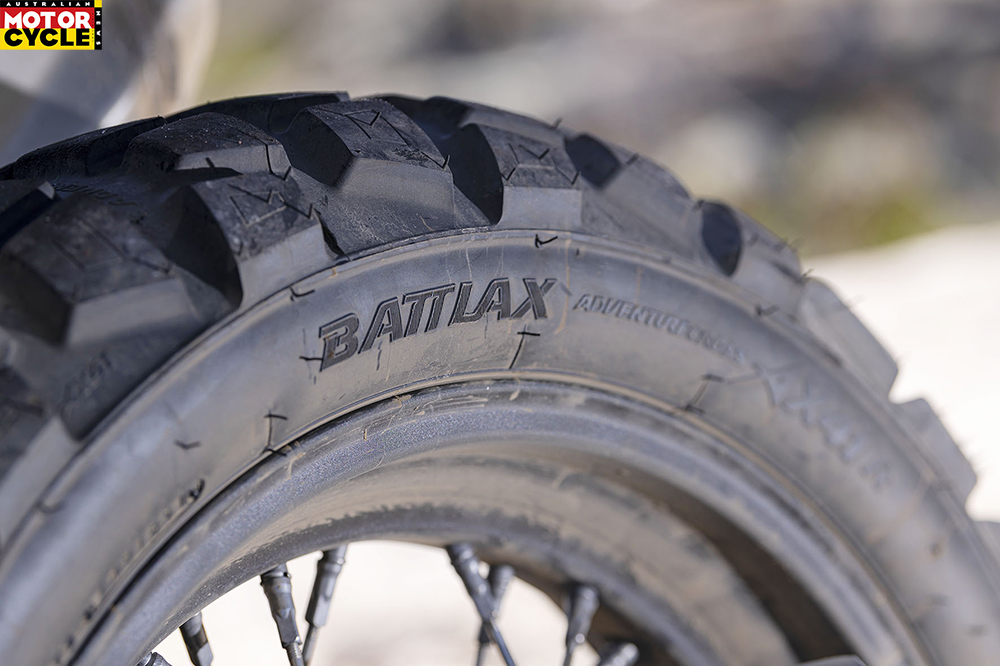 The ergonomics on the 1290 are outstanding. The seat is very comfortable, the pillion is well catered for and there are numerous genuine seats available from the KTM hard-parts catalogue if the stock one isn’t quite to your liking. The windshield is easily adjusted using both hands but at my height of 180cm, I was wishing it would go just a little higher. It wasn’t a problem at anything below freeway speeds, but the wind did shake my head around a bit as the numbers on the speedo went north. 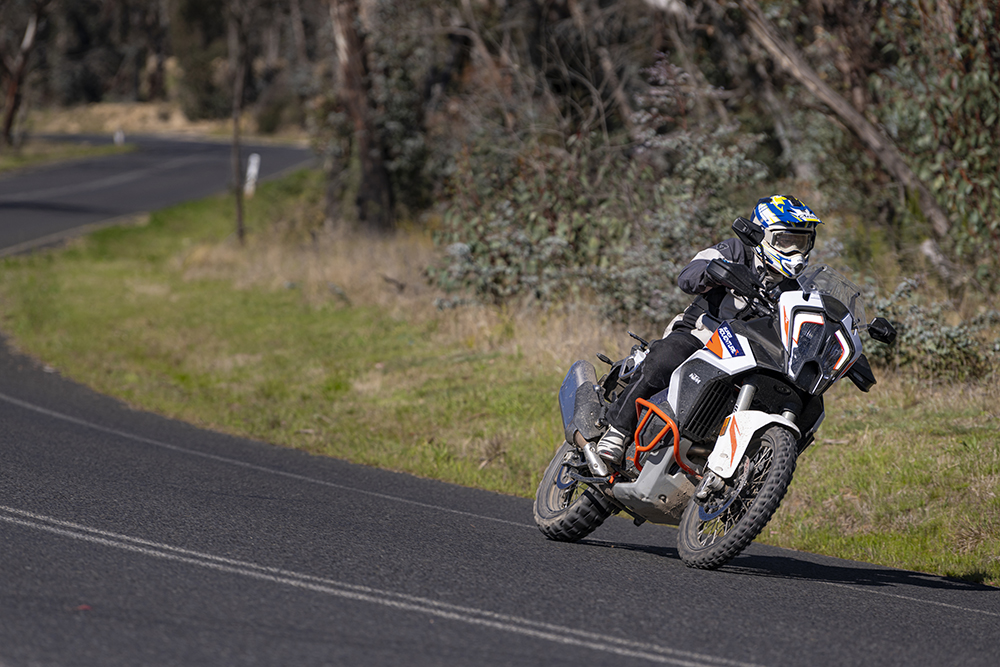 Info on the new seven-inch TFT dash is very easy to read in day or night conditions and each ride mode has its own individual layout. The LED lights are exceptional, and this also applies to the lean-sensitive cornering system, which works incredibly well. Good headlights are a must if you plan on doing any country or outback riding at night and the KTM’s well and truly tick that box. While we all know it’s not an ideal scenario dodging ’roos, cattle or wombats on remote back roads, it’s good knowing you will at least see them first with lights this good. They are automatic, and they will quickly change from the daytime running to low beam when low light is detected. 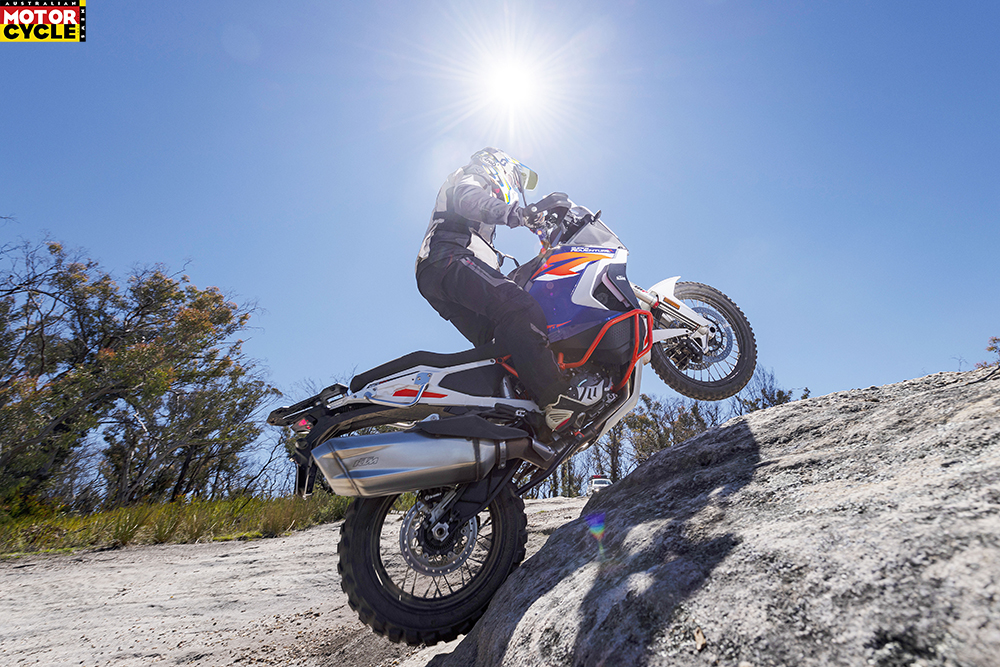 One of the very few things I didn’t like about the KTM was the indicator switch – it’s easy to turn on but very hard to turn off manually. The bike will self-cancel them, but it takes too long in my opinion, and you don’t want to be glancing at the dash to see if they’re off when approaching the next intersection with another vehicle thinking you are turning rather than going straight. 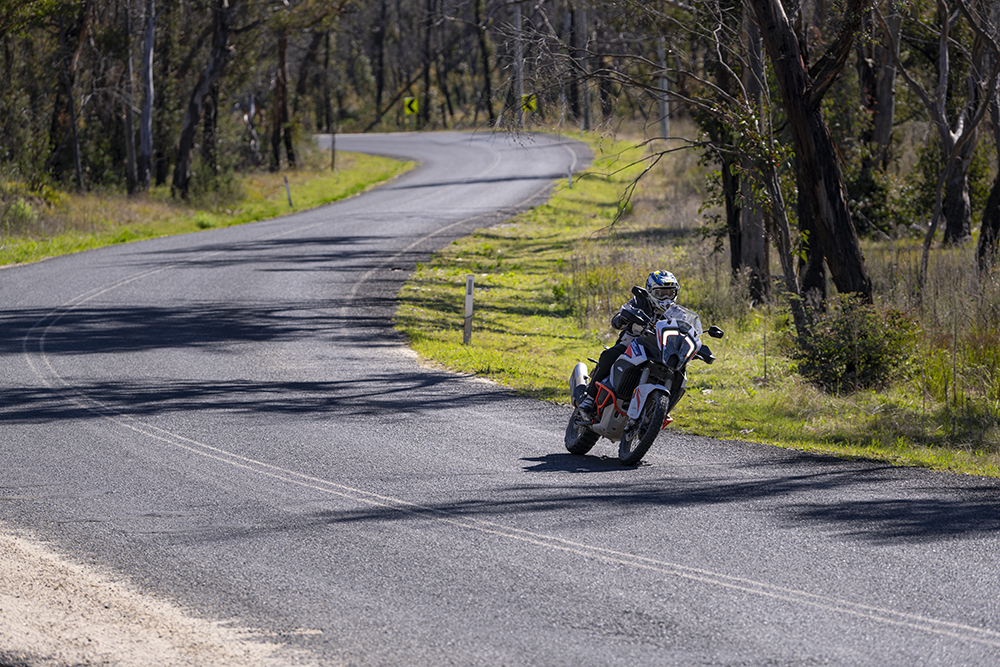 Since the 1190 Super Adventure R hit the scene, wheel strength has been a criticism of those who like to ride hard on the dirt. The Super Adventure received stronger wheels in 2016, but unfortunately, I still managed to put a dent in the front rim of this latest version. The wheels run a tubeless setup and I spent 200km worrying if the front was going to hold air for long enough to get me home. At this price point and given the overall quality of the rest of the bike, it was a bit disappointing. 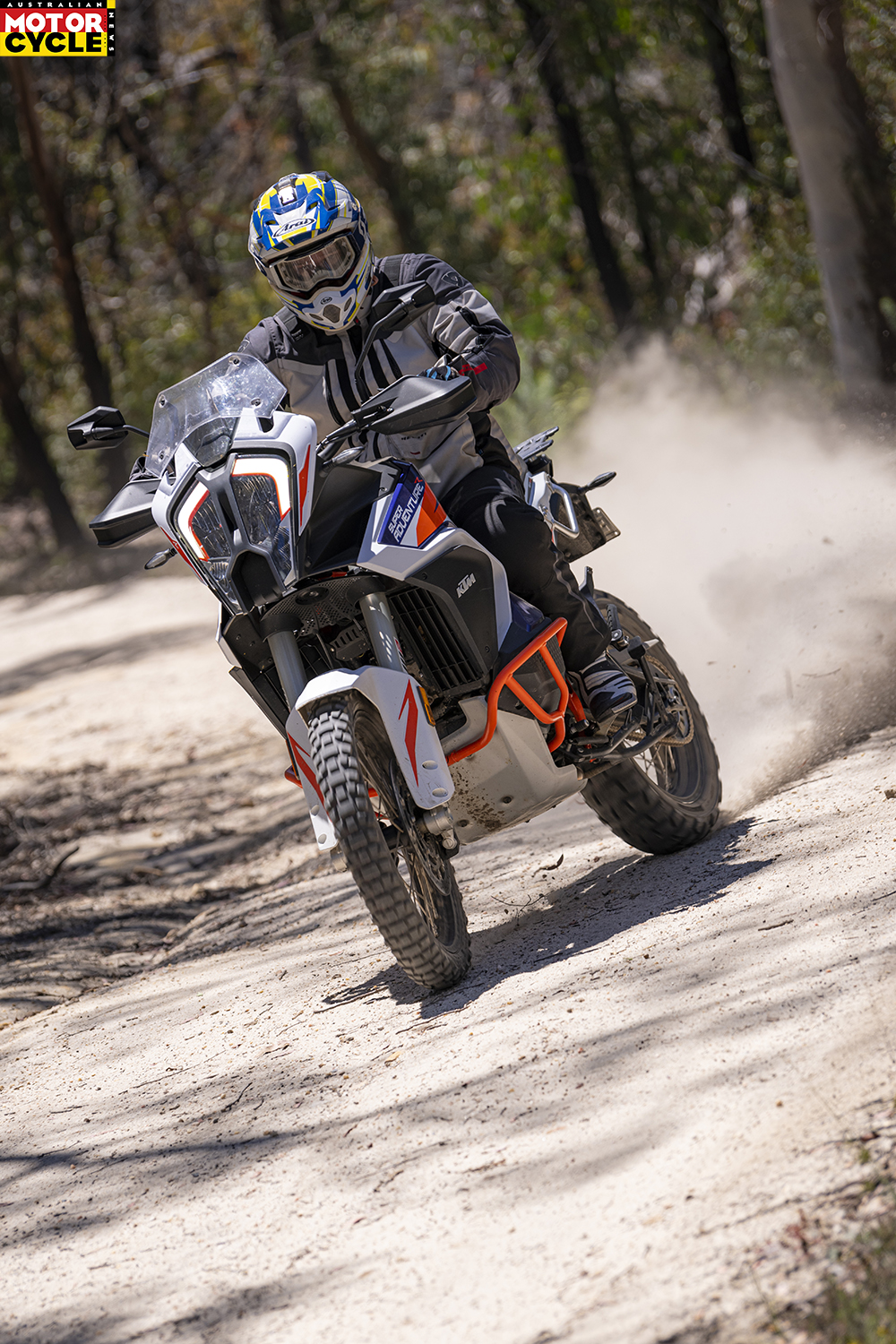 For those of you who like to do your own servicing, the oil filter, sump plug and air filter are all very easy to get to, and the factory centrestand makes tyre repairs easy. For a bike this size, it is so easy to lift onto the centrestand, too, which just shows a really well thought out machine. Engine protection looks solid but is quite flimsy so I would be fitting a more substantial bash plate for peace of mind. 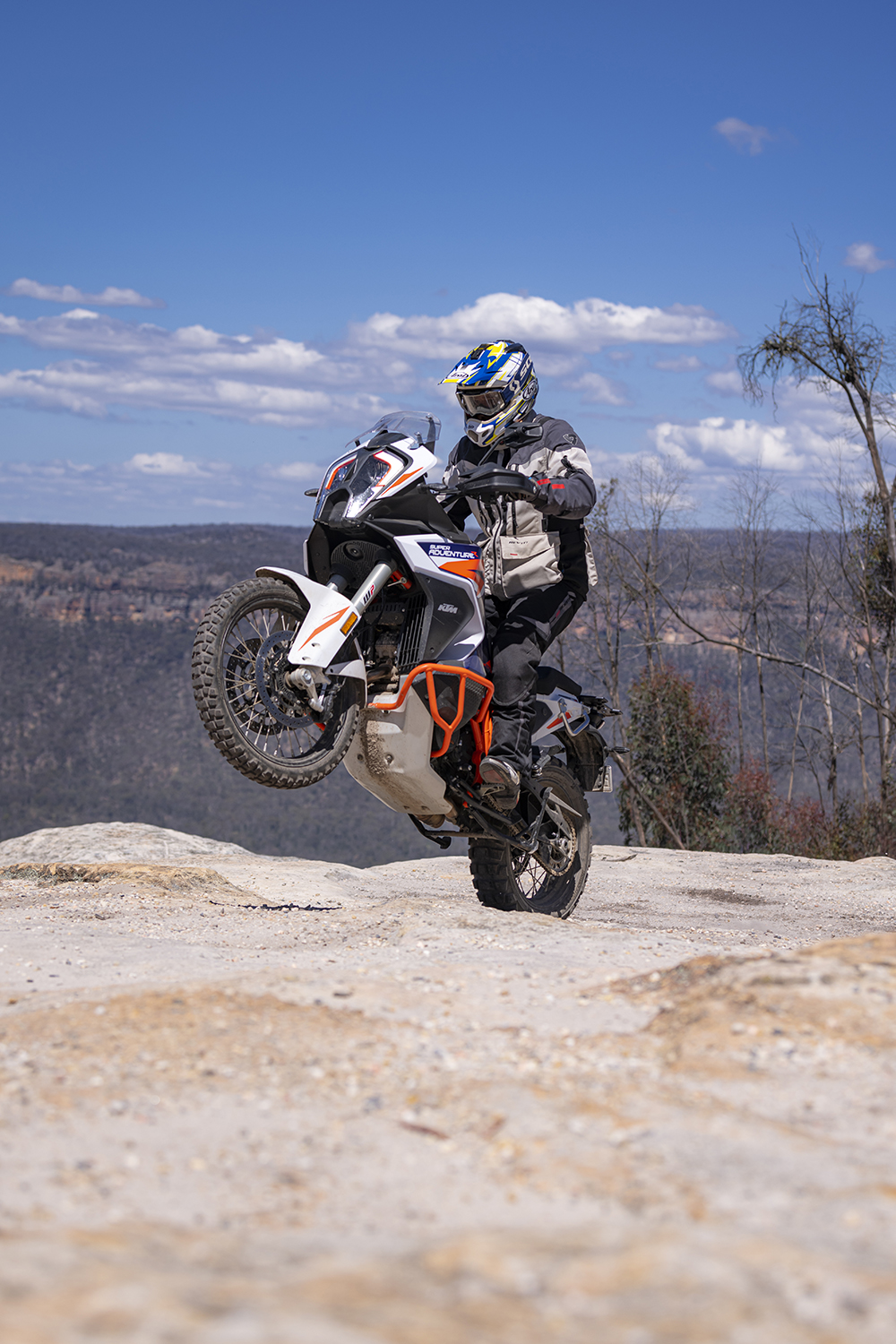 I couldn’t get enough of this bike; I loved every minute on it (except those 120 minutes after I dinged the rim). The power, refinement and ability to push the envelope on any surface left me in awe of just how good a high-performance all-round adventure motorcycle can be. The changes brought in 2021 have made it better off and on the road. I seriously want one. 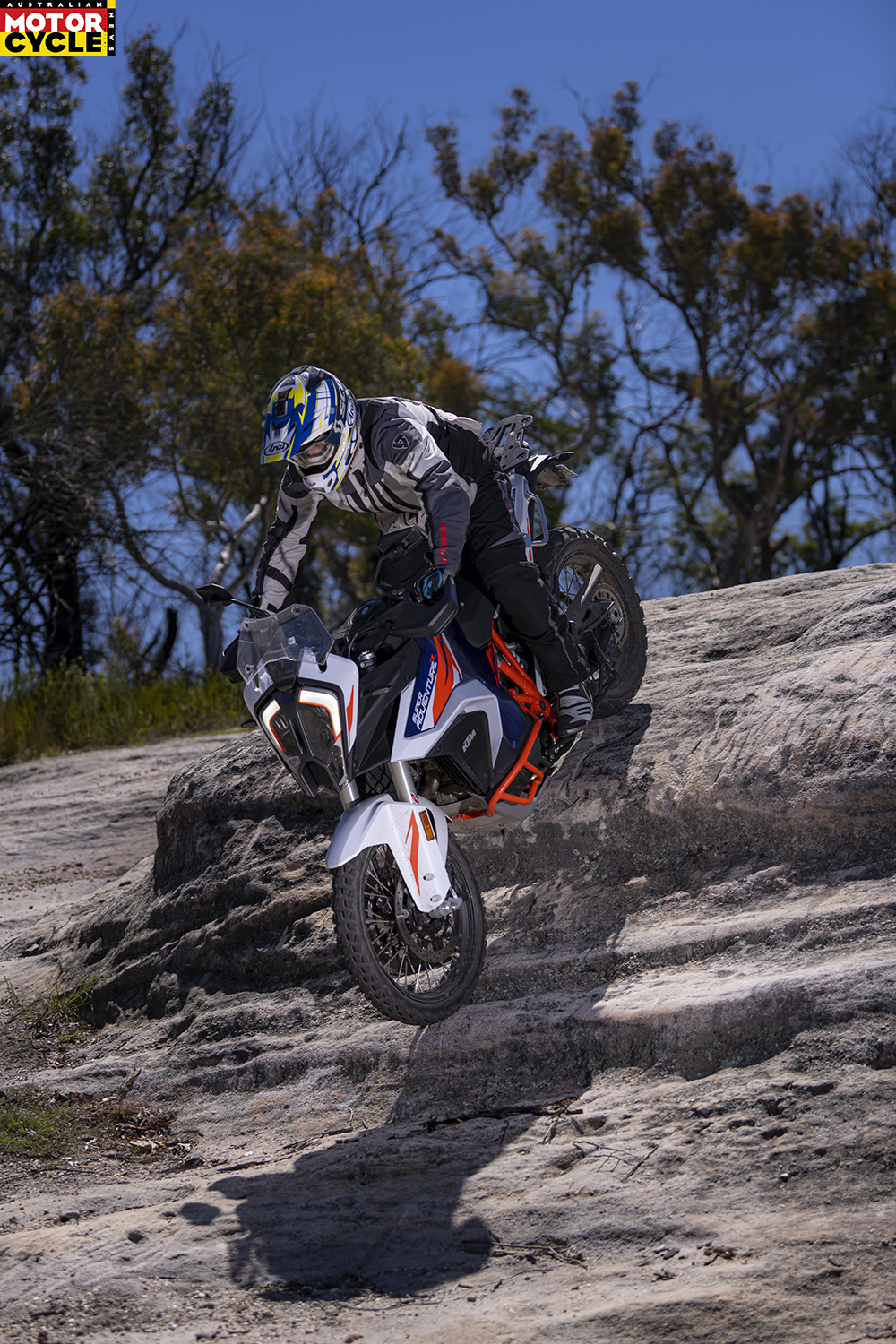