Reinventing hard-edged sportsbikes into performance nakeds is a trick Ducati has successfully accomplished multiple times. Now, for 2022, Ducati has stretched its Streetfighter range again with the launch of the Streetfighter V2. And while it’s the bottom of the rung in terms of the Streetfighter sub-brand, it’s no ‘entry-level’ bike; the 112kW (153hp) V2 is heavily based on the race-ready Panigale V2, but now in a simple naked format.

The Streetfighter shares the same monocoque frame as the Panigale V2, using the Superquadro engine as a stressed member. The suspension is similar, too, with fully adjustable 43mm Showa Big Piston Forks and a fully adjustable side-mounted Sachs unit on the rear. The non-adjustable steering damper is also by Sachs.

Visually, the fork appears the same as the Panigale’s, but carries more open settings for road-riding and comfort. The rear Sachs set-up is close to the Panigale’s, too, but the effective spring rate is reduced slightly because the swingarm is 16mm longer. Ducati has lengthened the swingarm to improve stability, as nakedbikes are fundamentally more unstable than fully faired bikes due to the absence of aerodynamics and the upright position of the rider. 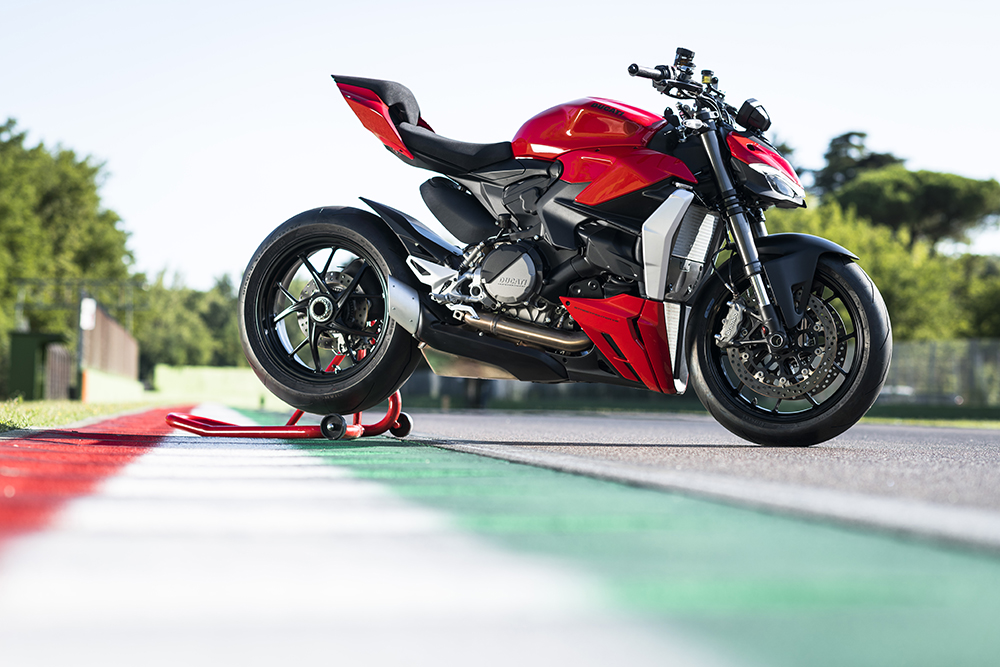 The test was split into two sections – road and track – running the same Pirelli Diablo Rosso 4 rubber for both elements. On the road, steering is nimble and fluid. It’s satisfying to sit tight in the Streetfighter’s comfortable saddle and simply point and steer with minimal effort. Big wide ’bar, a generous riding position and the lack of bulk from this 178kg naked all contribute to a bike that is easy to manage and relish in.

Even when you up the pace, it’s difficult to criticise the new Streetfighter. The suspension remains pliant yet is able to take on some aggressive riding without any loss of control. Feedback from the Pirelli rubber is first-rate, ground clearance isn’t an issue, and at no time do you feel the need to fiddle with the suspension’s damping adjusters. 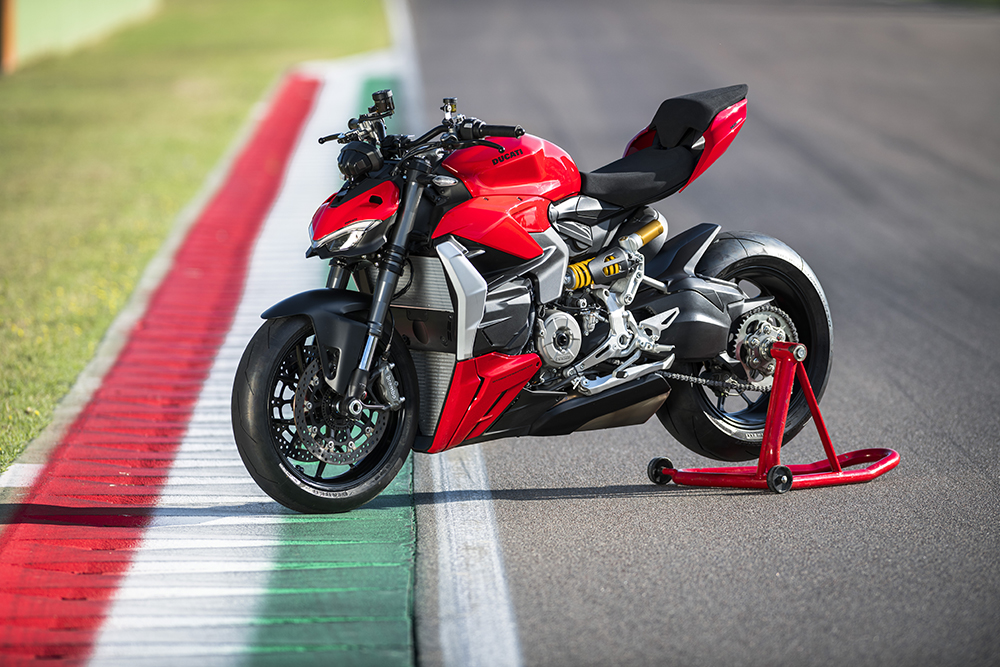 For the track element we tickled the suspension by adding 4mm of spring preload front and rear to give the chassis more support and increase ground clearance due to the Streetfighter’s lower ’pegs compared to the Panigale V2. And despite using the same road-focused rubber, the Streetfighter continued to impress. Steering remained precise and sharp, ground clearance, with that added preload, meant only my toe sliders touched on the odd occasion, and feedback from both ends remained excellent.

As the pace increased to race speeds, the Diablo rubber reached its limit. Releasing the powerful Brembo stoppers at the apex with lean would get the front tyre working overtime. But there was so much feedback coming through the ’bar that any potential scary moments felt expected and not too alarming. Just a clear indication the V2 was pushing the capabilities of its rubber. 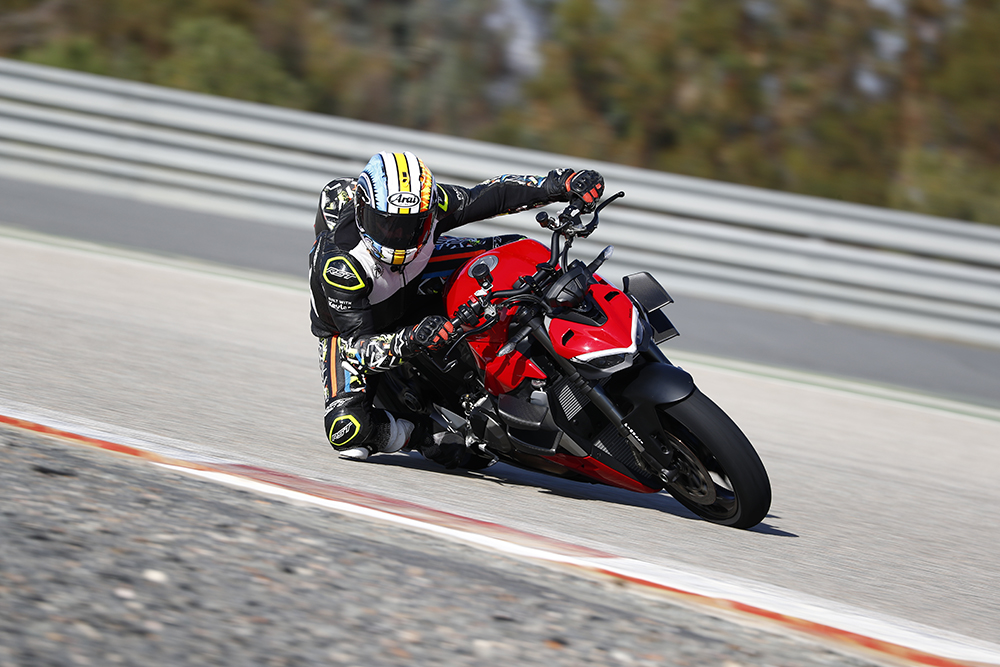 The rear was better behaved, only complaining a few times. But again, you can feel the movement, feel the limit approaching – and always that lean-angle sensitive traction control system was working seamlessly in the background.

I loved riding the V2 on track, arguably more so than its big brother V4. The limitations of the test were not the chassis, but the grip level of the track and the road-biased Pirellis which were asked to work far outside their design parameters. I’d love to try the Streetfighter again on Pirelli slicks or SC1 race rubber as I believe there is more to come from this chassis, and even more fun to be had. 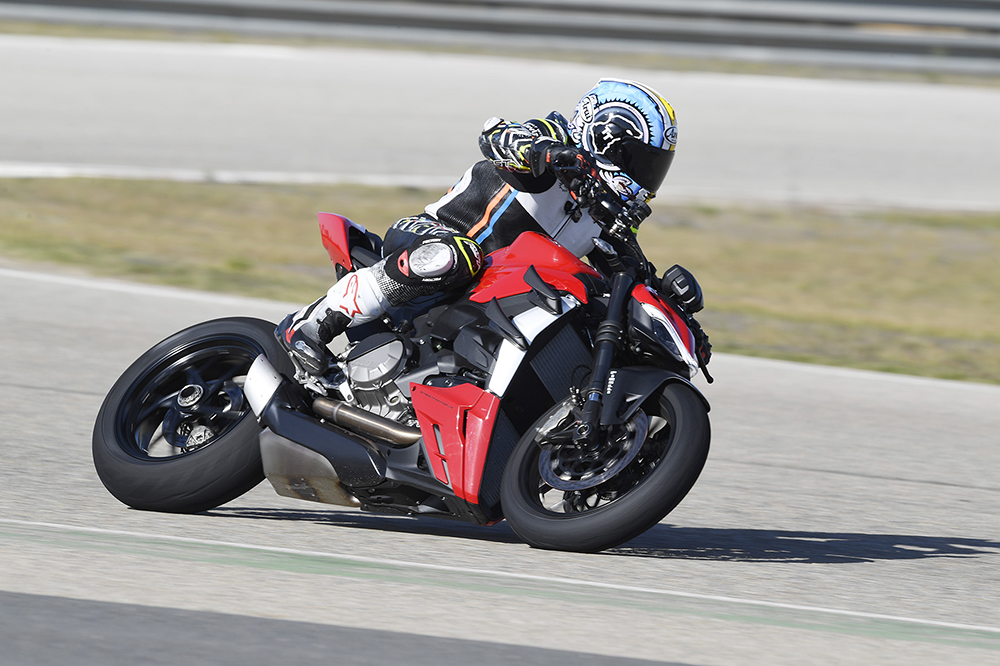 On the road the Brembo stoppers, backed up by Bosch cornering ABS, are faultless; powerful two- or single-finger braking is more than enough. On track, straight line braking on smooth surfaces is shockingly good, a real eye-opener, no fade despite the hard punishment on track. From 255km/h from top gear back to second at the end of the one-kilometre-long straight, I can’t praise the Brembos enough. Just squeeze as hard as you dare and let the clever ABS do the rest.

It’s only when pushing for lap times, while braking heavily over bumpy sections, could I feel the ABS intervention, but again this felt reassuring and was down to a combination of factors; road-biased rubber at its limit, a very bumpy track, and the level of grip slightly lower than expected. Fit some trackday rubber and I doubt you’d ever sense the clever intervention. 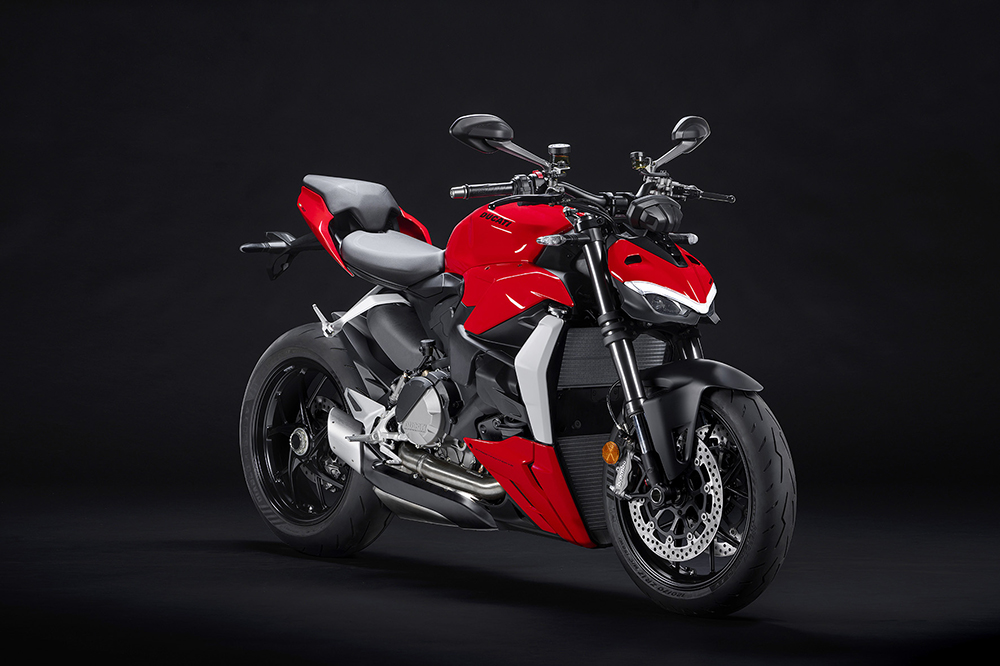 The 955cc 90-degree Superquadro V2 is taken directly from Ducati’s sporty Panigale V2 and makes 112.3kW at 10,750rpm and 101.4Nm at 9000rpm. There are three riding modes to choose from – Sport, Road and Wet – and each have unique power characteristics. Sport and Road are full power, with differing throttle response, whereas the Wet mode reduces power down to 110hp. Not only do the modes change the power output, but they also interact with multiple lean-sensitive rider aids: DTC (Ducati Traction Control with 0-6 levels), DWC (Ducati Wheelie Control, 0-4), Cornering ABS and EBC Evo (Engine Brake Control, 0-3).

When we started our test on the super-smooth, traffic-free roads of southern Spain, I opted for the standard Road mode, with the standard pre-set rider aids. Despite the Streetfighter’s angry face and the aggressive marketing images of the new bike, it’s actually rather docile and easy to live with. The engine pulls cleanly from 2500rpm, with plenty of midrange torque, which means you don’t need to be dancing on the up-and-down quickshifter. There’s a noticeable step up in power around 6000rpm, and it will blissfully rev to the redline should you wish it to. But our road ride was on the sedate side, as we negotiated the many deserted hill-top villages close to the Monteblanco racetrack. 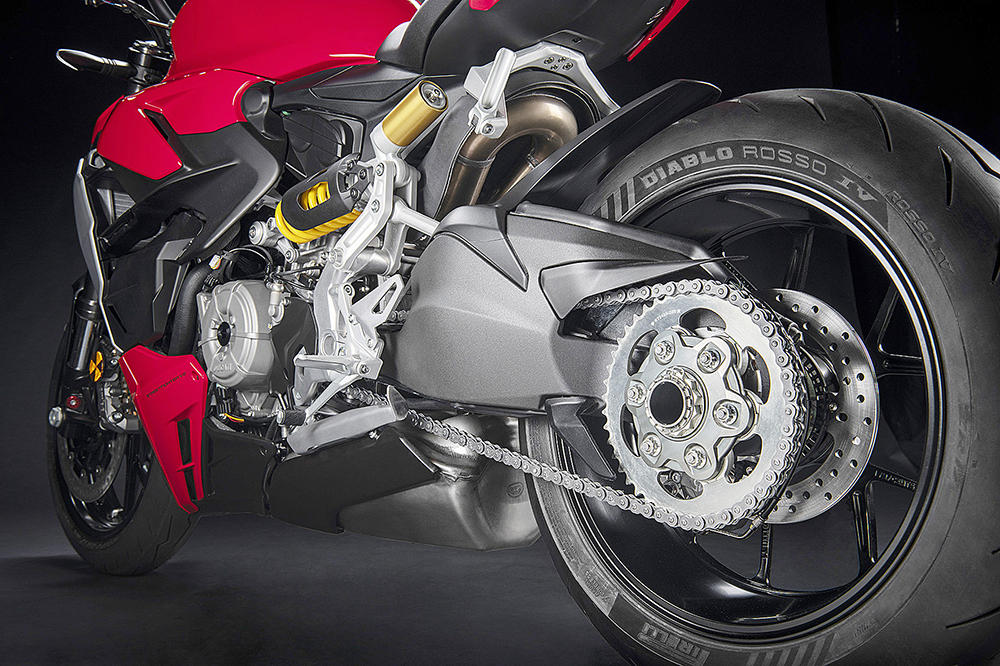 In Wet mode, selected from the switchgear on the left-hand switchblock with a closed throttle, a drop in power and urgency is evident – it feels like the throttle has more movement to it, with less reaction. Rider-aid intervention levels are increased for tricky conditions, and over speed humps or during hard acceleration the electronics are working overtime – yet are still smooth and unobtrusive.

The modes aren’t just techy gimmicks, and there’s a noticeable change when you switch to Sport mode, too. Power delivery is more urgent, the Ducati wants to gallop. Despite some intervention from the traction control and anti-wheelie, the front will lift on occasions but, reassuringly for inexperienced riders, only by a few inches before gently falling again. Should you wish to rock climb without ropes, both traction and the wheelie control can be switched off. 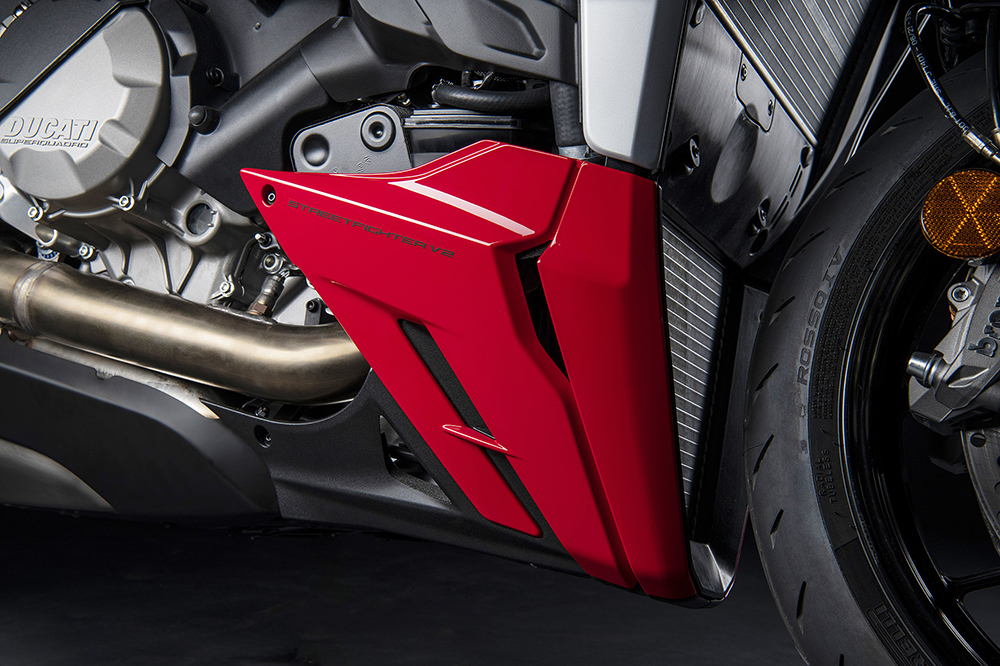 As you might expected from a 955cc V-twin, there’s a slight snatchiness when the revs drop below 2000rpm, but certainly nothing like twins of old. The 955cc Superquadro still pushes out over 150hp, which is more than Carl Fogarty had when he took his first WorldSBK championship for Ducati. At the end of the main straight the V2 was indicating 255km/h and still pulling before I was forced to focus on my braking point.

This is a quick motorcycle, whose low gearing promotes startling acceleration. But it’s also far less daunting than Ducati’s mind-blowing V4 Streetfighter; you have more time to think, pick a line and focus. The V2 delivers a combination of midrange torque and free-revving power that gives great drive out of corners and is equally happy holding on to its revs as it charges north towards its limiter. It doesn’t try to rip your arms from their sockets, but it is quick enough to give your upper body a thorough workout. It’s a neat and carefully blended balance, one that neither overwhelms nor leaves you wishing for more. 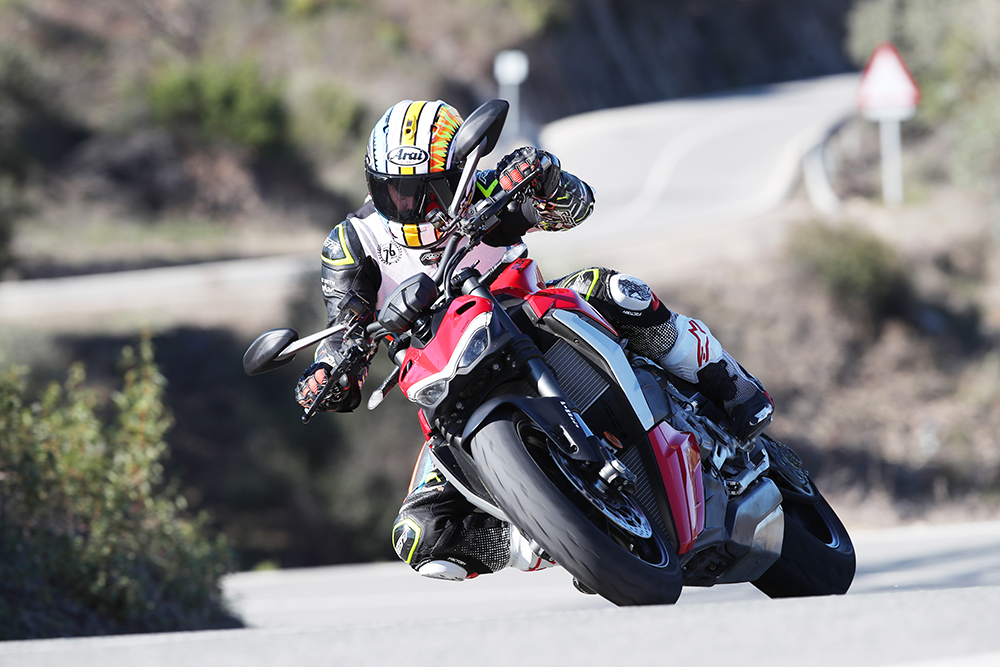 It’s practicality is where the Streetfighter excels, as a roadbike it makes a lot more sense than the sexy Panigale V2. The riding position is obviously more upright than the Panigale and it’s even more upright than the Streetfighter V4. The seat is wider, thicker, and flatter than the Panigale’s, there is more room between the seat and the ’pegs, too, which are mounted a fraction further forward.

With no bodywork to hide behind – not even the clocks – high-speed touring isn’t going to be much fun and pillions must be tiny or brave – or both. 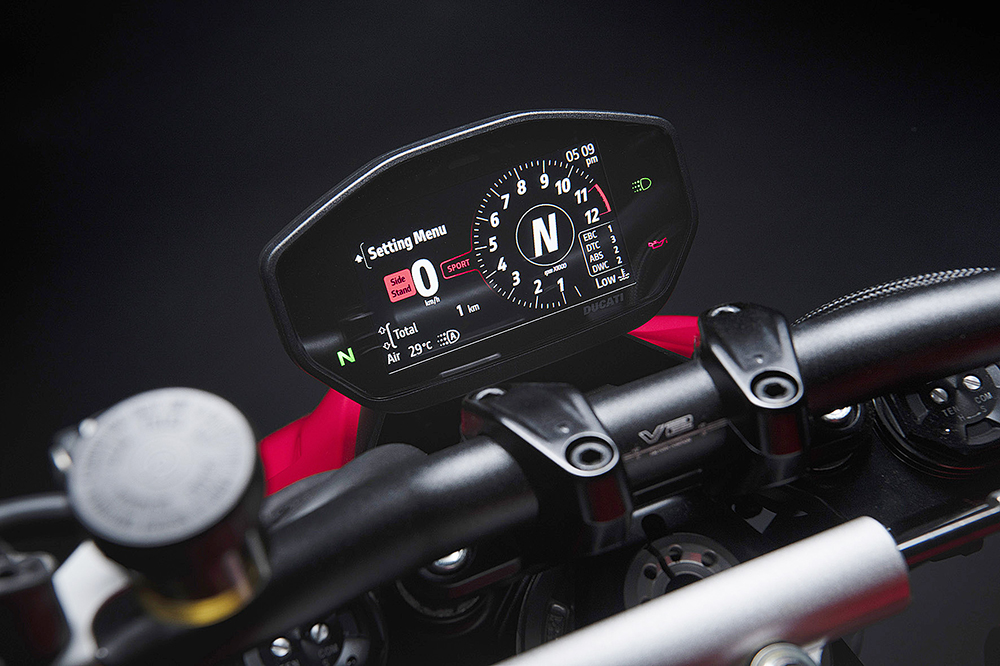 The fuel tank capacity remains at 17L and Ducati quotes a consumption figure of 6L/100km. On my relatively steady 130km road ride, I averaged 4.8L/100km which, in theory, gives a tested range of 218km.

You can change the modes from the set-up menu at a standstill, remove the wheelie and traction control if you require, even opt for the least of the braking strategies in set-up 1. By selecting 1 you’re getting front ABS only, not lean-angle sensitive, with the rear deactivated.

Once you’ve personalised a setting, for example removed wheelie control in Sport mode, this can be done on the fly with a closed throttle. All this is relatively straightforward, with the switchgear interacting with the full-colour 4.3-inch TFT dash. By modern standards, the dash is a little on the small side, and it doesn’t boast Bluetooth connectivity. Personally I don’t mind not having connectivity, but I do prefer the full-colour clocks on the new Multistrada V2. 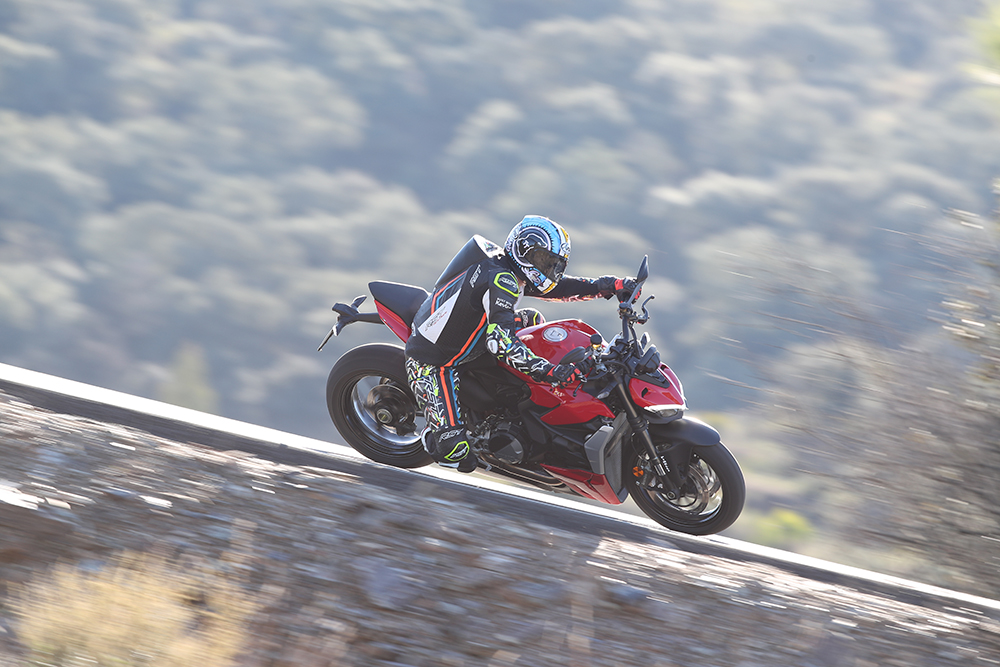 Far simpler to live with, ride and manage than Ducati’s V4 Streetfigher, and in many ways, a much better roadbike than Ducati’s Panigale V2. It’s roomier, comfier and cheaper, yet you have more or less the same power, rider aids, and chassis. On track with race rubber, it wouldn’t be dramatically slower than the Panigale V2; for average riders there wouldn’t be much between the two bikes. If you primarily ride on the road, the Streetfighter makes a lot of sense, but arguably is not as desirable or sexy as the Panigale. 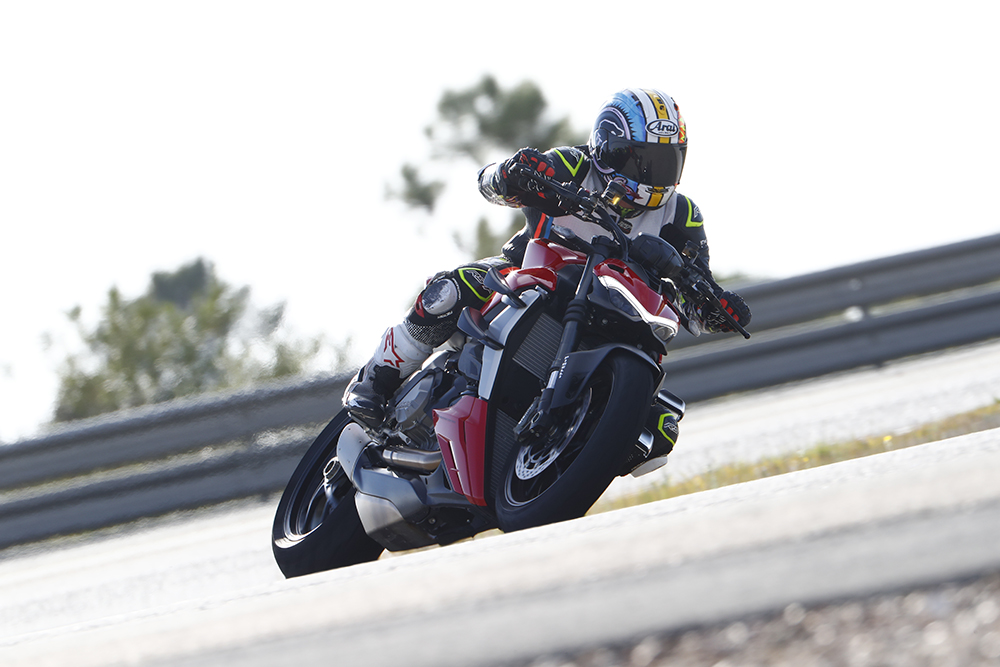 There’s no concealing the fact it’s expensive but as a versatile roadbike, it’s not just impressive against the race-ready Panigale V2 but sits in that enjoyable gap just below arm-ripping supernakeds and the less desirable, but cheaper middleweight naked machines. 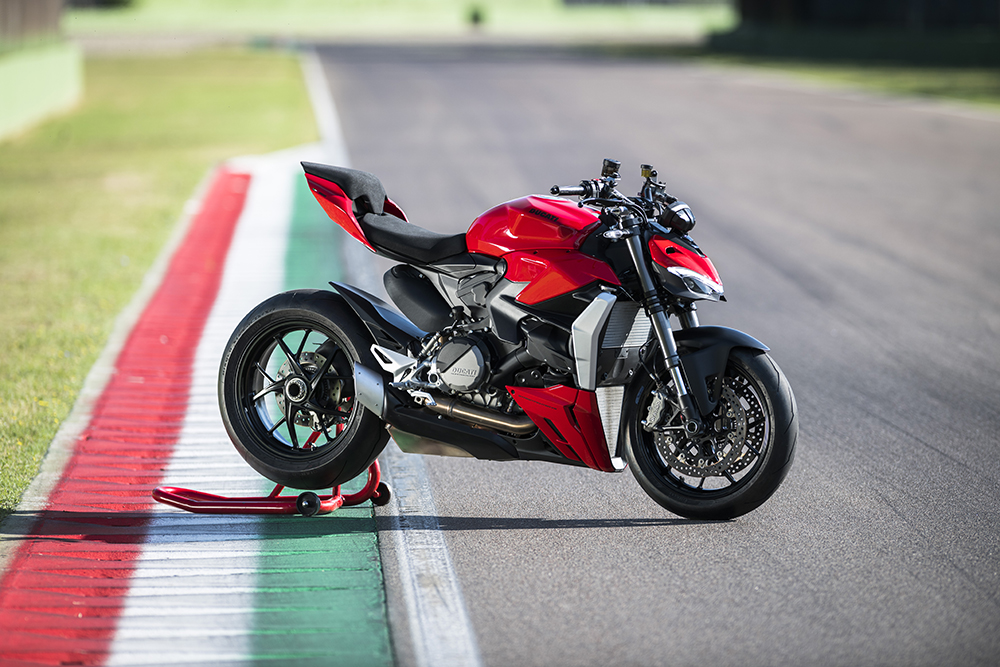