Kawasaki waved its wand over the cult classic KLR650, bringing it back from the dead with some modern-day updates

Since 1987 the KLR650 formula has remained mostly unchanged. Robust and reliable, it can do just about anything. The KLR looked like it reached the end of the road in 2018 when it was shelved due to tightening emissions, but Kawasaki deemed it too important to lose and 2021 saw the introduction of two new models: the KLR650 and the KLR650 Adventure.

Despite the addition of the ‘Adventure’ moniker to the higher-equipped model we’re testing, Kawasaki hasn’t reinvented the wheel. Instead, it has given the KLR a tickle in the right places to give it a new lease on life starting with the heart and soul of the KLR – the engine. The ever-reliable 652cc counter-balanced thumper has been gifted fuel injection, new cam profiles and a smaller exhaust header to improve midrange torque at road speeds. 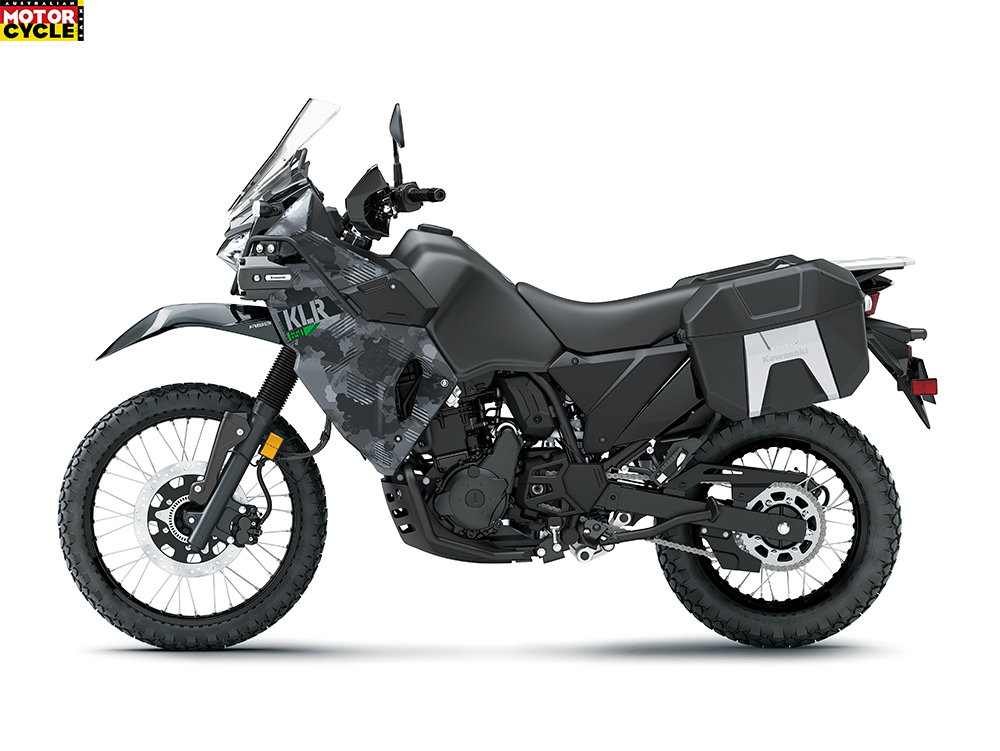 The engine fires into life effortlessly with perfect fuelling no matter where you are and what the conditions. The big single purrs like a kitten on the road and even with just five gears, it will cruise along at the national speed limit effortlessly for hours on end. While 28.5kW won’t stretch your arms, it has enough power to have plenty of fun off-road, sliding the rear around corners and chugging up hills in the bush. The KLR is very quiet so keep an eye out for wildlife that you might sneak up on – someone clearly took the silencer design a little too literally… damn those euro emissions tests.

There are no peaks or troughs in the power delivery; it builds speed progressively allowing you to make the most of each gear. Speaking of, the gearbox received some tweaks to increase reliability in the higher ratios. It feels solid, shifts easily and the cable-operated clutch is pretty light in your hand. 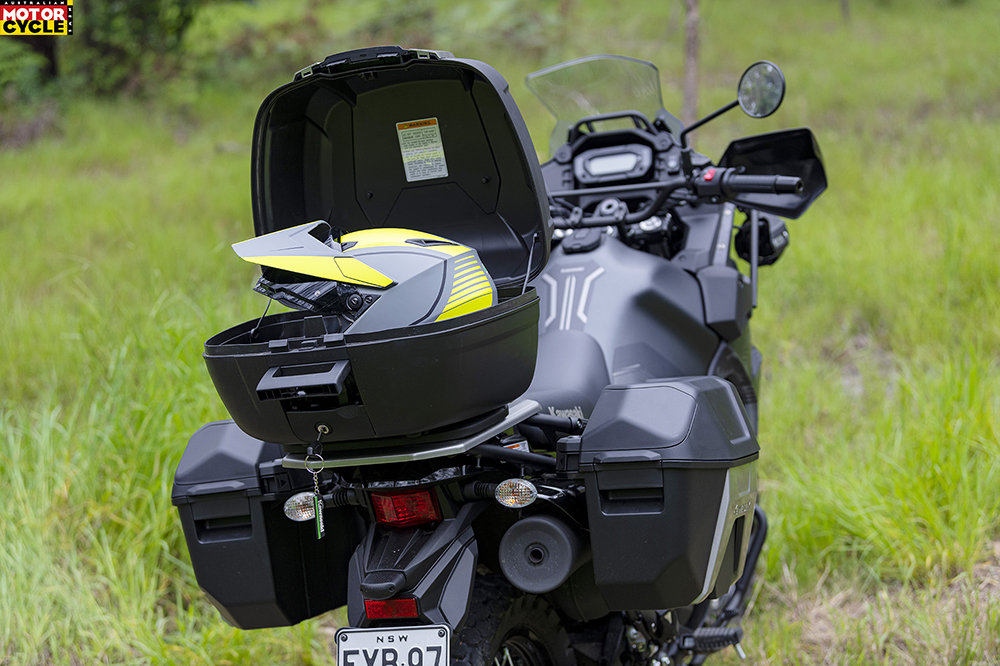 The five-speed ’box gives a nice wide spread of ratios for the road, but the large gap between first and second gears have me hunting between the two when riding slower sections of fire trails. First gear isn’t super-low or anything, it just feels like when it’s time to change up, second gear chugs a little until you are up the speed.

Fuel efficiency has also been improved; I measured 5.6L/100km during my test, which was far from efficient riding. So with 23L of fuel on board, fuel stops could be up to 400km apart – important for anything with an adventure sticker. 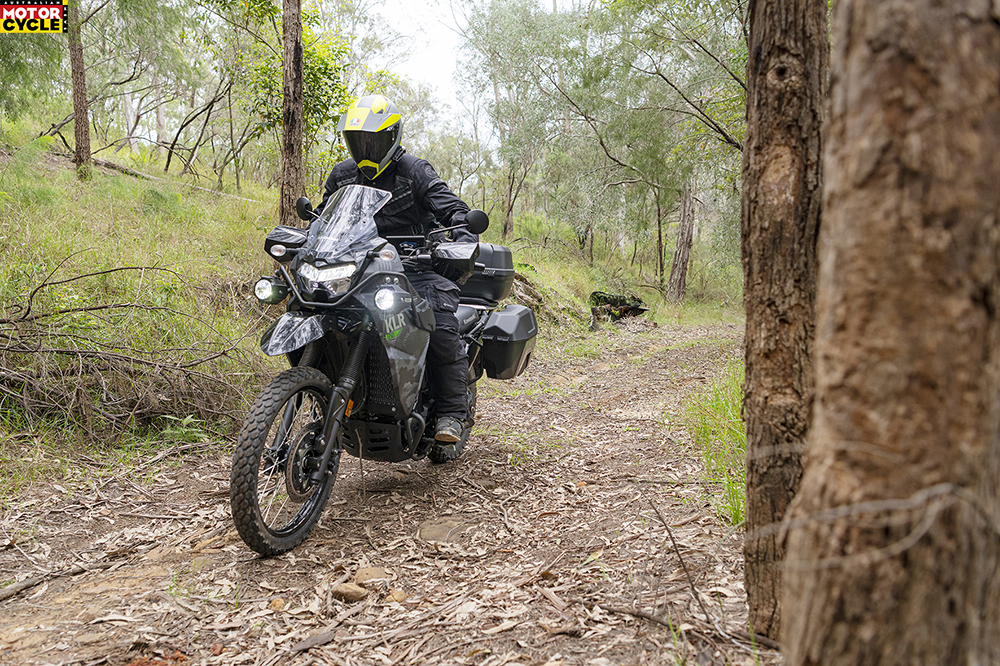 The chassis has been revised to enhance its touring capability and to improve its manners on the road. The rear frame is now integrated into the main semi-double-cradle frame to increase load capacity and allow the hard panniers to be fitted to the Adventure model. Said panniers are styled to match the bike and have a decent 21L capacity. Our test bike is fitted with an optional 42L matching top box to take advantage of the extra carrying capacity. The swingarm has been lengthened to increase stability when road riding and it certainly feels more planted than the previous-generation KLR. Even when winding the speed up to 160km/h+ it is rock solid, there is no headshake or wobbles. 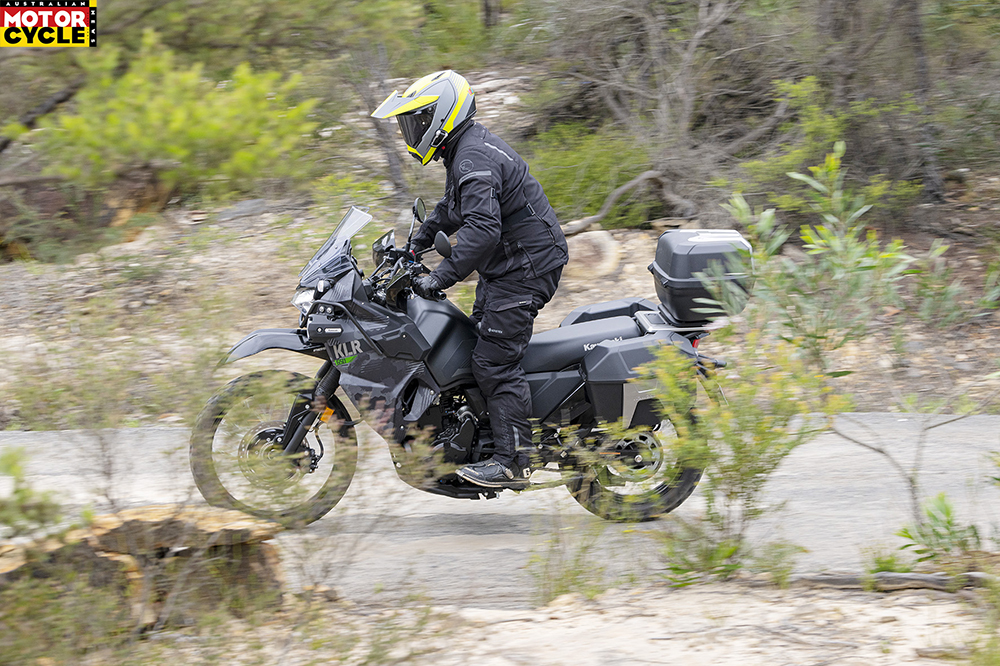 Off-road, the KLR is pretty lazy and relaxed, partly due to its 21-inch front wheel and 17-inch rear. It is happy tootling along exploring trails and back roads at a relaxed pace, when the speed is increased, it starts to become hard work and you quickly remember that this is a 222kg touring bike rather than an Enduro weapon.

The suspension is more comfortable at a cruising pace and at that speed is very plush. The 41mm conventional front fork has 200mm of travel with no adjustments available. It offers decent feedback of the road surface and does a reasonable job at smoothing out bumpy roads. 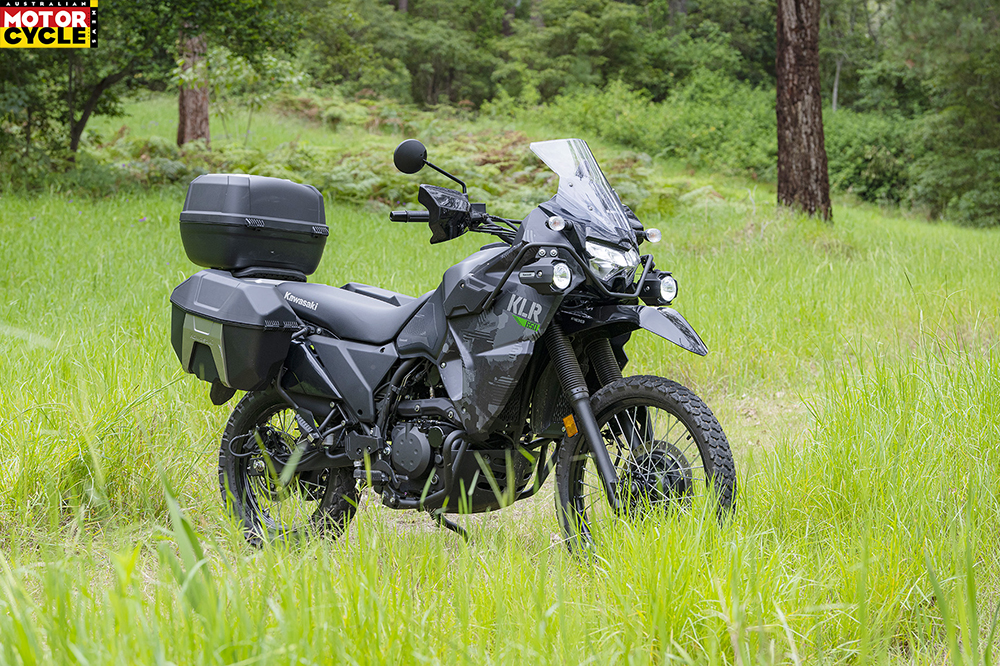 The rear monoshock with linkage has 185mm of travel and is adjustable for preload and rebound damping. Both are settings you would want to adjust if you were touring with the bags loaded up or carrying a pillion, otherwise, the rear will wallow over undulations. The damping at both ends is tuned towards on-road riding while still being capable on the dirt. If you get too aggressive, the big KLR does bottom out when you start getting air between your tyres and the dirt, so tracks with erosion jumps need to be negotiated with care. 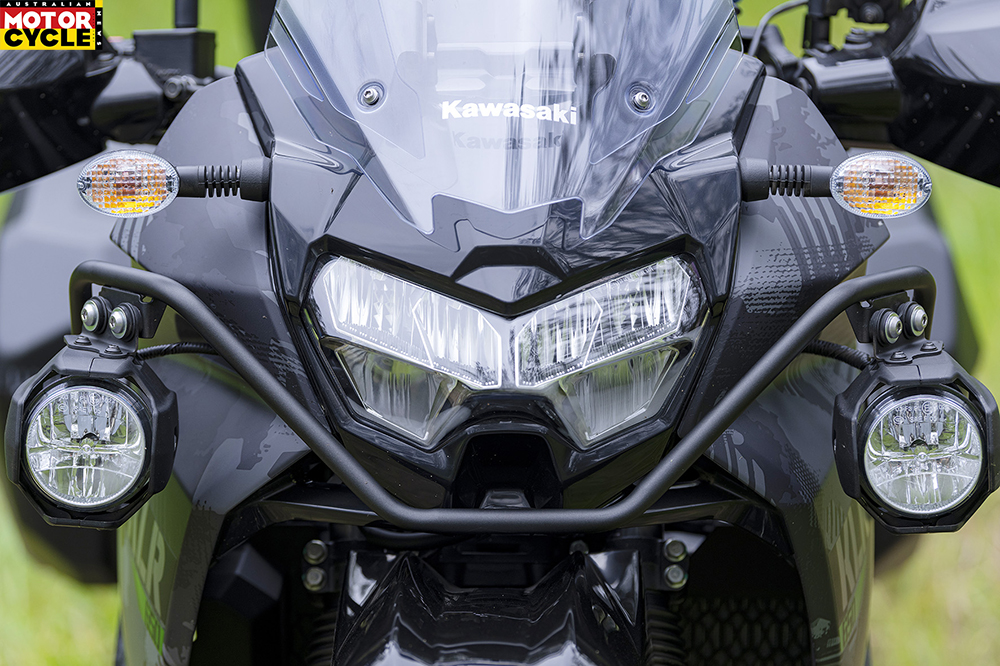 The single-disc front brake is now slightly bigger at 300mm. Kawasaki has moved away from petal-style discs and back to round for the classic look. The dual-piston caliper provides adequate performance for an off-road style bike and grabbing them hard will bring on the non-switchable ABS, and you can feel the fork starting to twist in retort. At the rear, a 240mm disc is now one millimetre thicker to help dissipate heat generated by the increased carrying capacity. As with the front, the rear brake power is adequate and feels okay. ABS is non-switchable, so there will be no skids on the KLR. 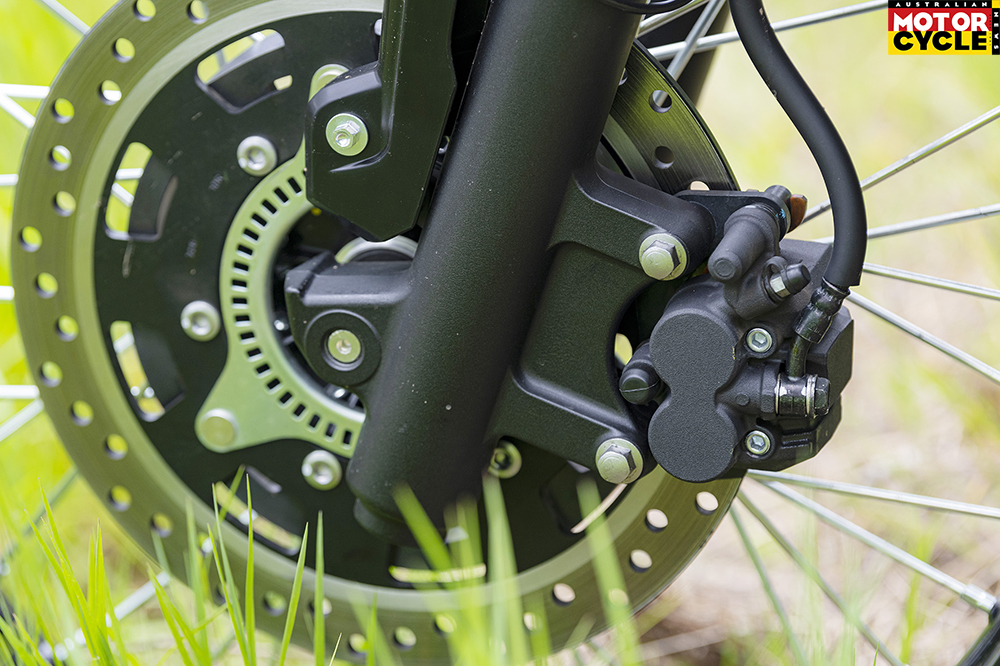 The imposing stance of the KLR is no accident, with the styling taking a form that follows function approach. The big front cowl integrates the windscreen, headlight and back to the fuel tank. It offers good weather protection, as the bulk of the wind is diverted around you at freeway speeds leaving you relaxed and not having to hang on tight. The screen is adjustable with tools to two different heights. The handlebar is wide and low creating a relaxed riding position with your arms bent. When standing, the ’bar feels a little low, so if standing is your jam, then add some ’bar risers to your shopping list and, while you’re at it, get some metal off-road-spec footpegs so you don’t slip off the rubber ones when they get wet or muddy. The ’bars and footpegs are rubber mounted to reduce vibrations. And between the counter-balanced engine, rubber mounts and soft suspension, the KLR is less like a big thumper and more like a magic carpet ride. On the road, anyway. Kawasaki calls it ‘all-day ergonomics’ and I have to agree. It is a super-relaxing ride. 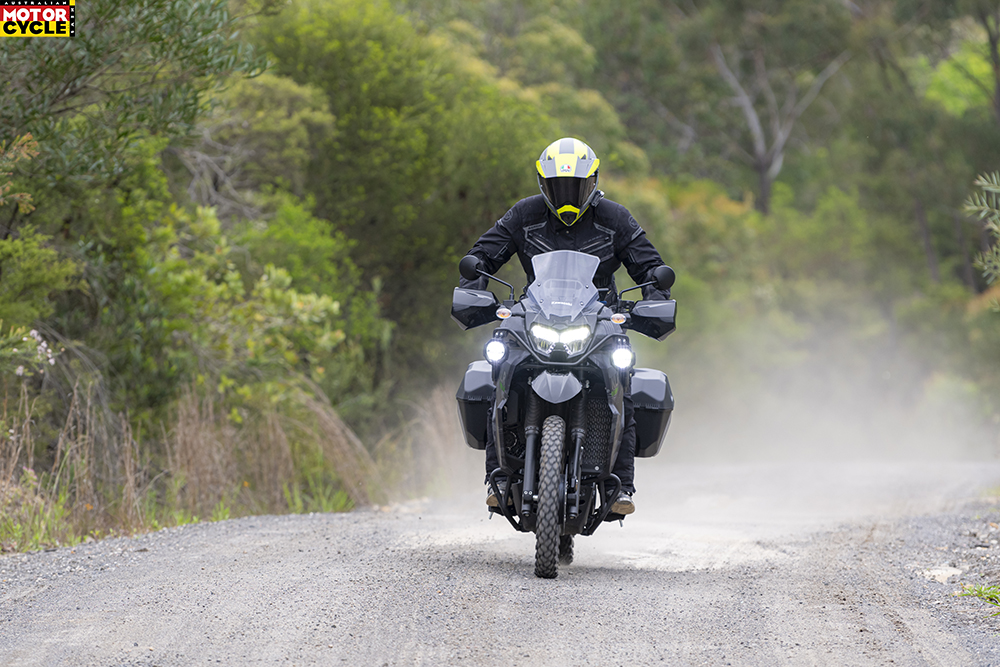 The 23L fuel tank feels comfortable between your knees and the one-piece seat is soft and wide. As it’s a single-piece deal, you can move back and forth until your heart’s content. Pillion comfort is decent with a wide seat, solid grab rails and rubber footpegs.

Our test rig is fitted with the optional heated grip kit. They look a bit rugged, but they work flawlessly and that’s the theme here anyway, right? Some reach-adjustable levers would be a nice addition to sit in behind the handguards. 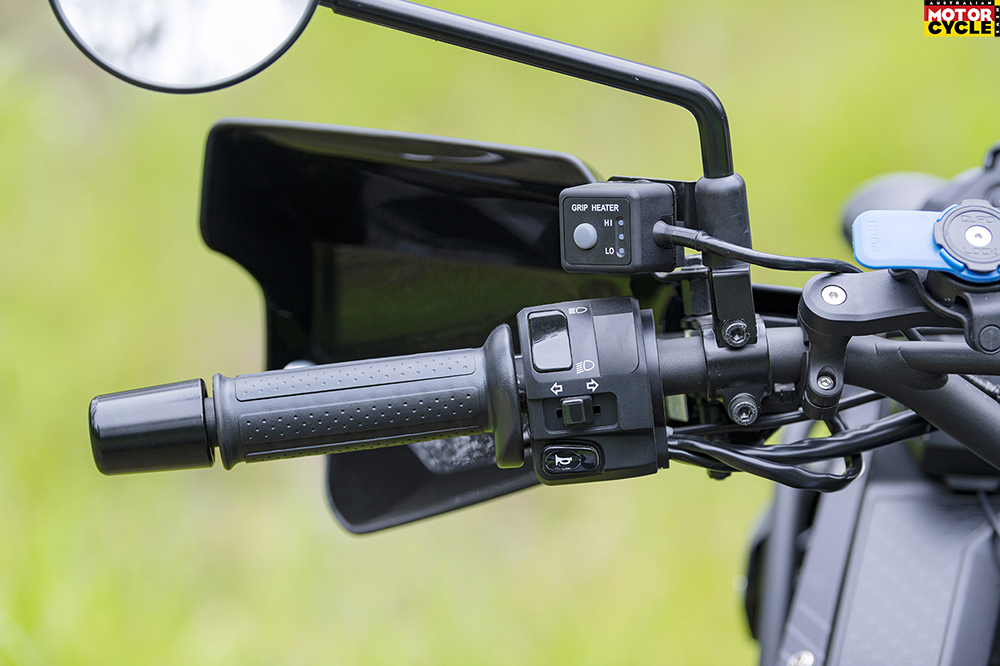 There isn’t any wiz-bang tech wizardry here. But Kawasaki knows that riders, or adventurers, will want to add accessories that suit them. So the generator has been beefed up to 26 amps from 17 and there is a higher-spec maintenance-free battery to help run the add-ons. There is a USB outlet and a 12-volt socket on the dash.

The instrument cluster is a neat and tidy LCD unit, offering just the basic functions like speed, trip meters, odometer, fuel gauge and clock. A gear indicator would have been nice, but it’s not a deal breaker. 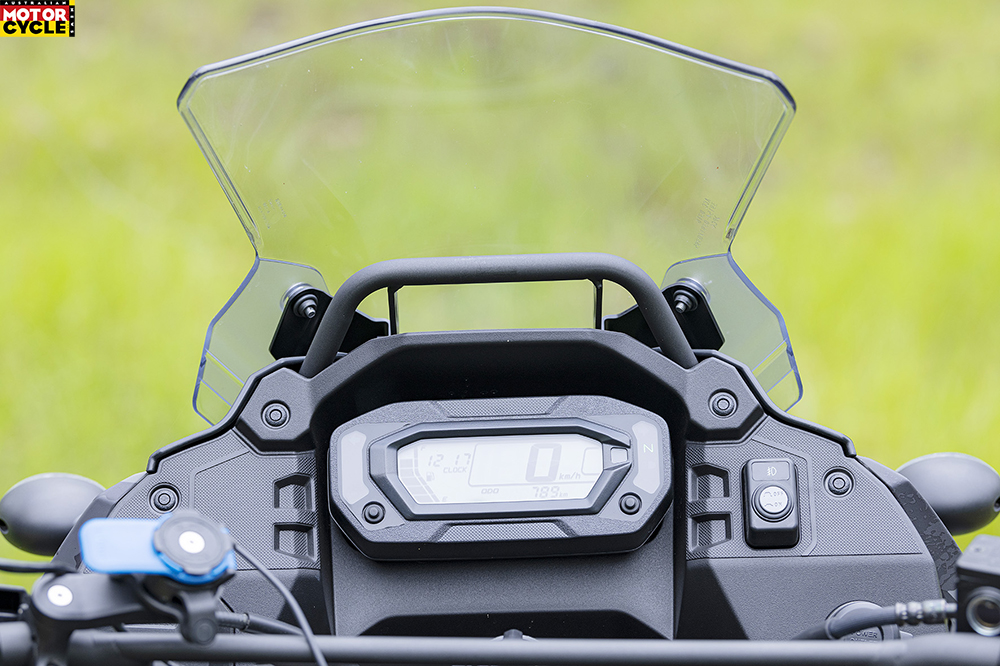 The new LED headlight is very bright and throws a nice wide beam. It’s complemented by the Adventure-spec LED fog lamps mounted off the side of the fairing, but running these just got me high-beamed from cars coming the other way. Blinkers and tail light are older-style incandescent globes rather than LED.

The new stronger rear wheel offers less flex, which should help with the handling. Tyres are Dunlop’s K750, which are 50/50 road and trail. While they are pretty quiet on the road and give reasonable grip, they aren’t great for ruts and grooves in the sand, but nothing out of the ordinary. Both are tubed so Adventurers can make repairs on the side of the road should they get a flat. A centrestand would have been a nice inclusion for these situations, though. 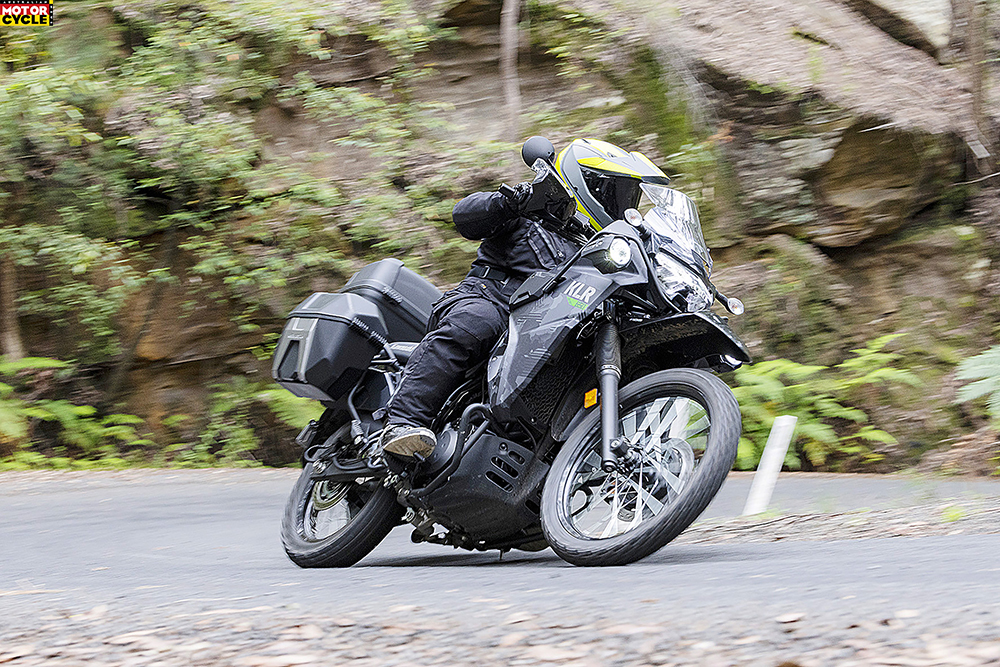 Overall, fit and finish on the KLR is decent quality and a worthy successor to KLRs before it. The base-model Khaki colour KLR650 costs $9129 (Plus ORC) and the Camo Gray Adventure model comes in at $10,129 plus on-roads. The extra dollars get you pannier bags, fog lamps, frame sliders and the power sockets ready to hook up a GPS unit and your phone. Our test rig is also fitted with top box ($459.41 including hardware) and heated grips ($340.41 including relay) 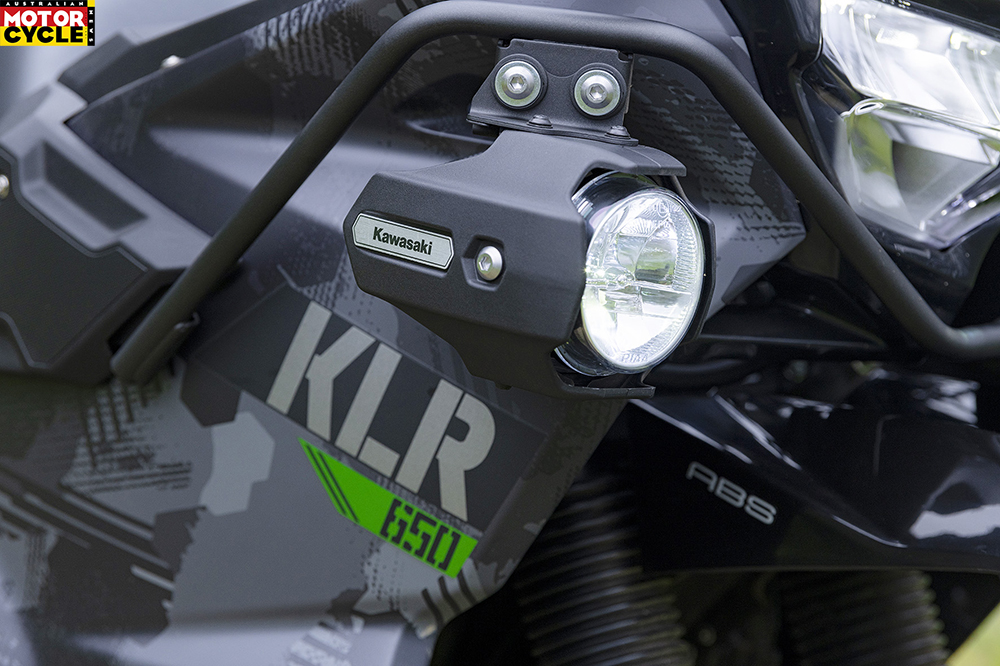 The KLR is a tough all-rounder, with its rugged looks and imposing presence it can tick a few boxes. Commuting is a breeze as you sit up high and see over the traffic, however, be careful filtering lanes with the bags on. After work, it’s ideal to get out and explore the local trails, and then on the weekend, it will cart you and your camping gear to some far-away campsite for a night under the stars.

The bang for buck is strong with the 2021 KLR650; it may not be the most exciting bike on the road, but you can guarantee it will probably outlast many of the higher-tech options on the market. It’s still the real deal.