The decision to replace the iconic tubular-steel trellis frame on the 2021 Ducati Monster with an aluminium monocoque was hugely controversial. And, as it turns out, long overdue

I get it, to some punters, looks, heritage and nostalgia are more important than performance and technology. That’s why the likes of Harley-Davidson and Royal Enfield are still doing well in the sales charts, I guess.

To lots of diehard fans, the 2021 Ducati Monster is no longer worthy of carrying the Monster name. The traditional steel-trellis frame that has long been the centrepiece of the Italian firm’s most iconic model’s design is gone. And some Monster fans aren’t happy.

Ducati has sold more than 350,000 Monsters since the original model was released in 1993, and it’s the bike credited with saving the floundering Italian manufacturer that has always been defined by its tubular-steel trellis frame housing a laid-forward V-twin. But that can’t be the only reason for the model’s enormous success – a trellis frame and V-twin described every Ducati in the range in 1993. The real reason for the Monster’s success is that it has always provided big fun in a small package, while giving riders access to the premium Italian brand at a reasonable price. So it makes no sense to judge the Monster by different criteria, because the Monster, with its swanky new frame is a lighter, faster, safer and more enjoyable bike than it has ever been.

The contentious new frame is similar in design to the aluminium front frame found on the Panigale range and bolts directly to the engine which is now a stressed member. The front-frame design has proven itself on Ducati’s performance range, it works on the Panigale – and it works on the Monster! The new frame is a significant 4.5kg lighter than the trellis frame of the previous model and there’s also a lighter Glass Fibre Reinforced Polymer subframe. That’s right, traditionalists – plastic! 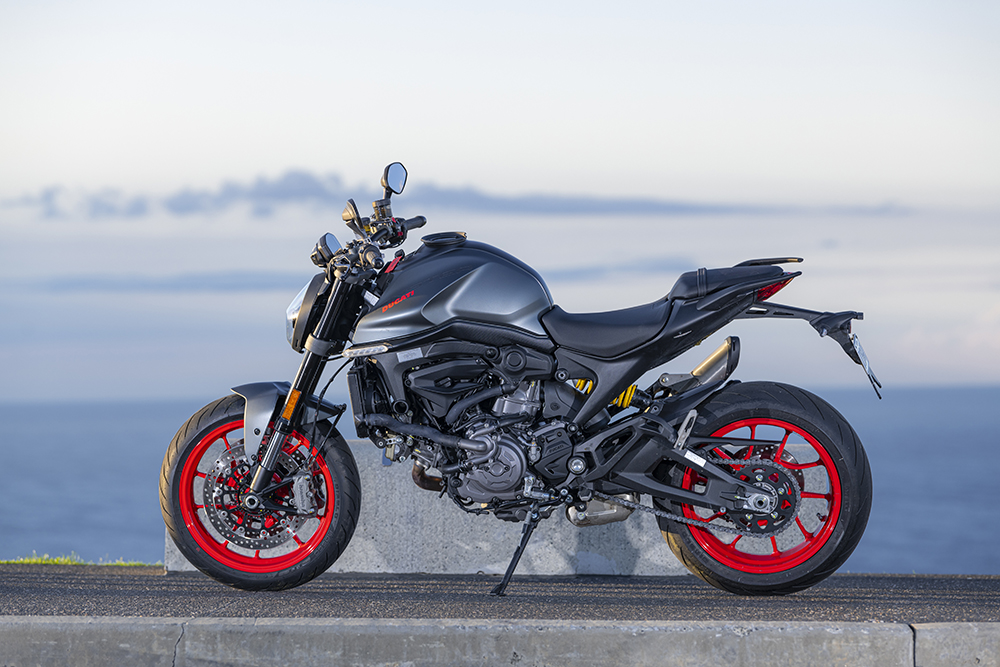 The Bologna brigade put the Monster on a diet and the ride has benefitted greatly. More on that soon, but before you even turn the key, you’ll know you’re on a very different beast. Firstly, it’s bloody small to look at and it seems even more so once you’re on it. The 14-litre tank and seat are quite slim and with an 820mm seat height, it’s a very accessible ride for people of shorter stature.

Despite the surprisingly small proportions, the riding position is comfortably, upright and sporty, even for a six-footer like me. 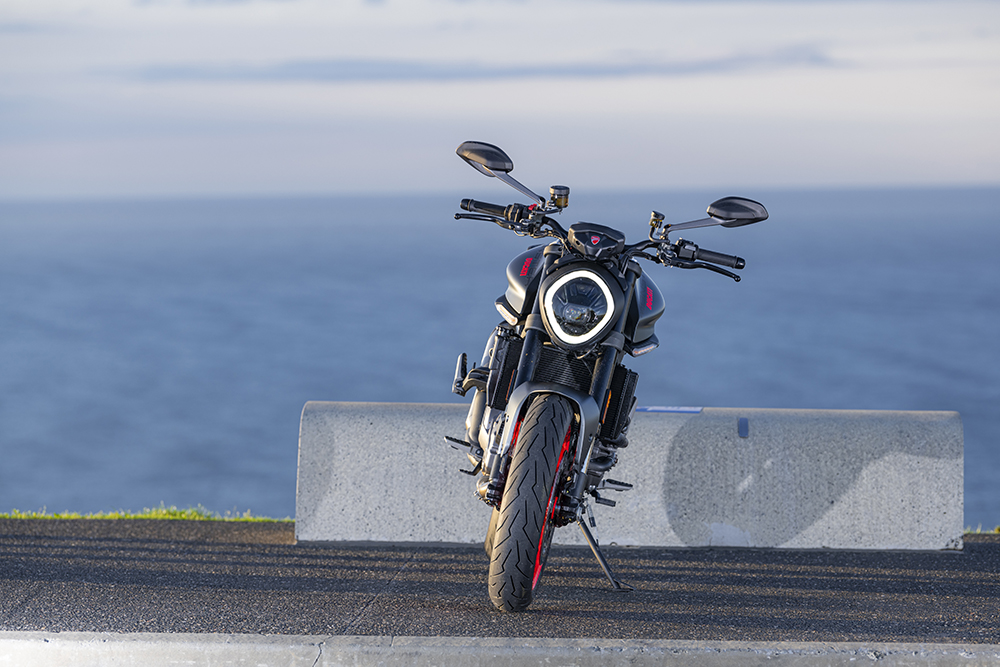 The Monster now weighs in at a claimed 166kg dry, that’s a 14.5kg reduction over the Monster 821 that it replaces. You can feel it as soon as you lift it off the stand – it’s compact and light and it’s easy to forget there’s a 937cc V-twin between your legs.

The Monster is powered by the same Testastretta 11° 937cc twin-cylinder L-shaped engine that powers Ducati’s SuperSport 950, Multistrada V2 and Hypermotard 950. The Euro 5 compliant Desmo sounds quite restricted, burbles quietly at idle and doesn’t get a heap better when you’re heavy on the throttle. The lacklustre exhaust note adds to the feeling that you’re not on a big-bore twin, as does the placid power delivery under 5000rpm. 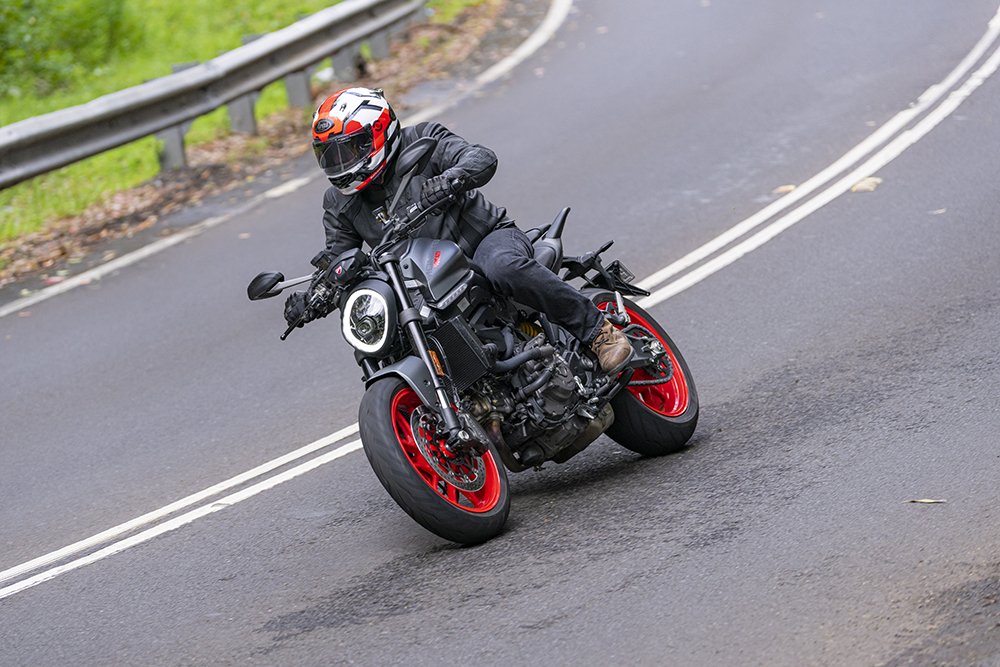 With 82kW of power on tap there is plenty to play with even under 5000rpm, it’s just that things get far more exciting after 5000rpm and there’s a real shove as you edge towards 6250rpm where the Monster’s 93Nm peak torque is produced. And that continues all the way through to 9250rpm where peak power is made.

It’s an engine that works everywhere; tooling around town or going hell for leather in the hills, but keeping it on the boil is where the magic is. The 937 Monster puts out just 2kW more power and 7.6Nm more than the Monster 821 but, with fewer kilograms of both sprung and unsprung weight to propel, it’s a spritelier ride in a straight line and around bends. 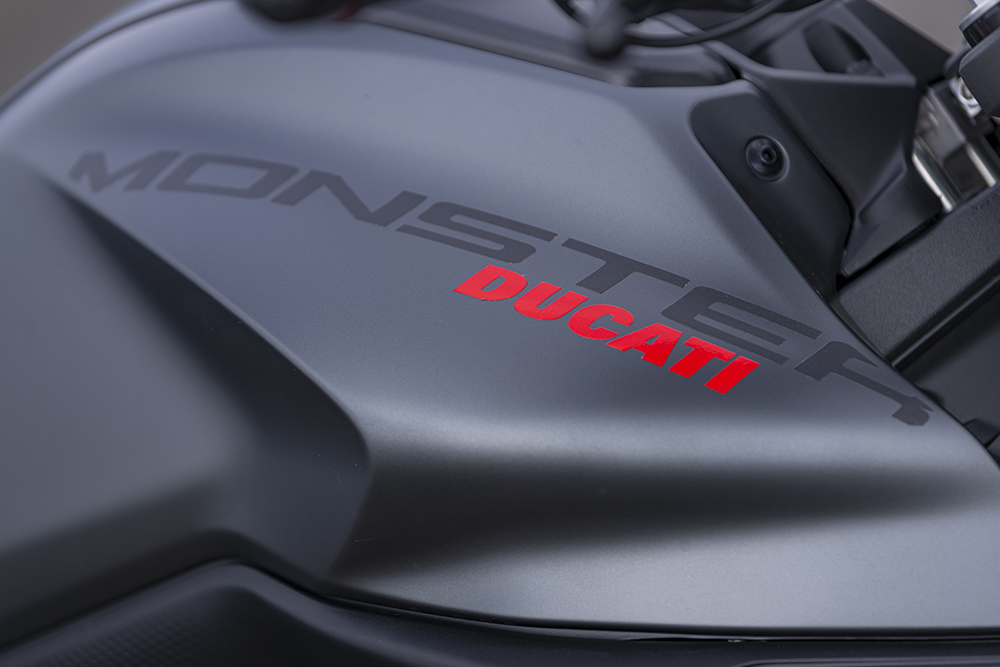 The Testasretta doesn’t seem to run as hot in traffic as other Ducatis, and while the thermo fan does come on regularly, it’s not blowing the heat at you; the rear cylinder isn’t trying to scorch your undies and that makes dealing with city riding so much more enjoyable.

The Monster is fitted with Ducati’s two-way quickshifter that lets you shift through the six-speed with buttery ease that not many can replicate. It’s so good you can use it no matter the situation – I’ve used it through carparks at 30km/h and it still does a brilliant job, and the blipper on down changes will have you flicking through an exhaust catalogue to unleash that beautiful V-twin music. 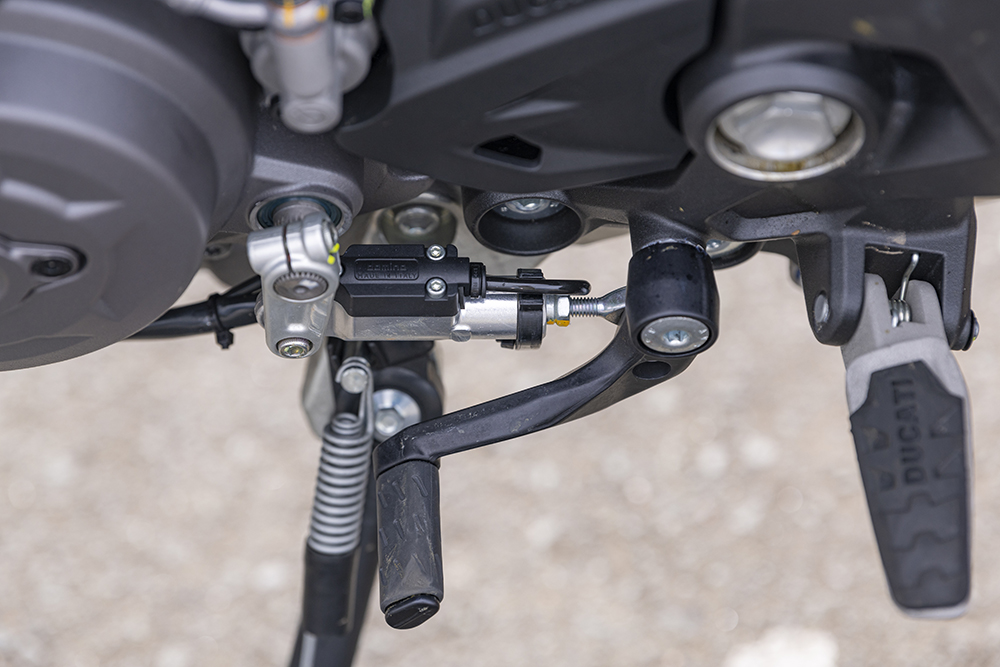 Ducati has also upped the ante with the Monster’s electronics package and the nude machine now features cornering ABS, traction control, launch control, wheelie control, and three ride modes – Sport, Touring and Urban – which can be altered on the fly to suit your requirements and desires.

Electronic goodies are controlled via a new 4.3-inch TFT dash which I found to be a real pain in the arse to navigate. Yes, you will get used to it, but it doesn’t need to be that hard – numerous manufacturers, with intuitive and user-centred interfaces have confirmed this.

Apart from the menu being as intuitive as a flat-pack Ikea bookshelf, there is one element of the electronics package that I really like – your previous settings are remembered by the ECU when you turn the ignition off and back on again, so you aren’t, for instance, required to turn the wheelie control off every time you’ve had too much red cordial. 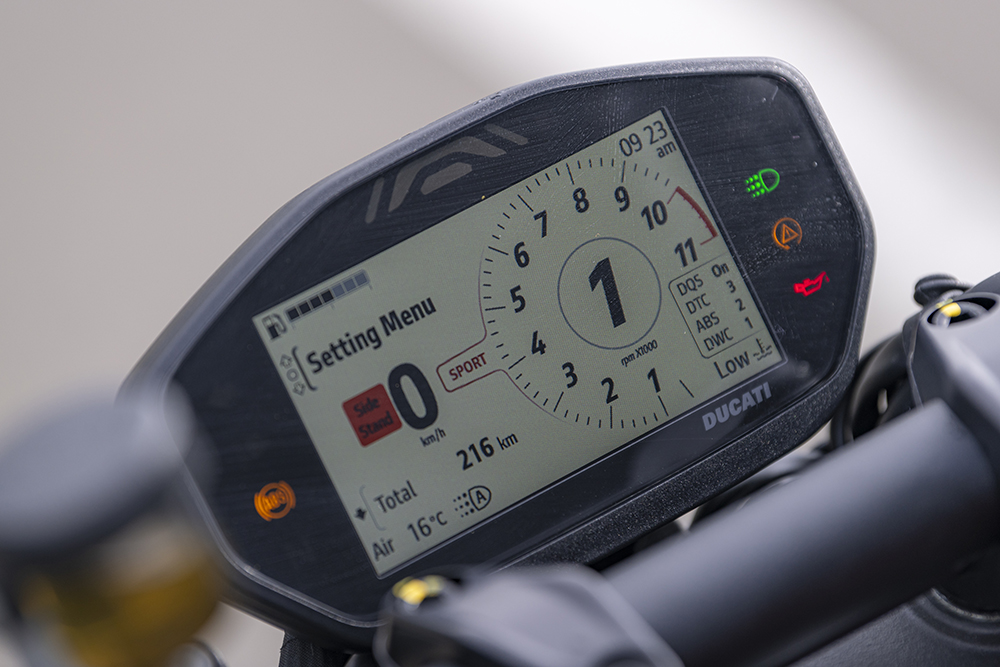 To my mind, $18,500 (ride away) is a keen price for so much bike, but it would be nice to have more suspension adjustability than our long-term Super Soco that’s less than half the price. The 43mm Kayaba fork is non-adjustable and the rear shock from the same manufacturer offers preload adjustment only. Having said that, I never had an issue with the performance at the front or the rear; it’s a setup that works whether you’re cruising for a pie or up it for a podium, but a bike is judged on its specs sheet sometimes and when you’ve got the likes of Yamaha’s MT-09 offering fully adjustable suspension, a full complement of electronic fruit and more engine performance – all for $2951 less – then the Ducati salesperson might have some explaining to do.

If you’re a faster punter or like the occasional trackday, you might be heading for some suspension work, but the reality is most owners will probably never touch the adjusters even if they had them. It’s a credit to Ducati that they got the suspension settings so spot on for such a varied range of riders. The Monster was part of our Motorcycle of the Year shootout (AMCN Vol 71 No 12) and not one of the 10 riders had anything but good things to say about the Ducati’s on-road suspension performance. 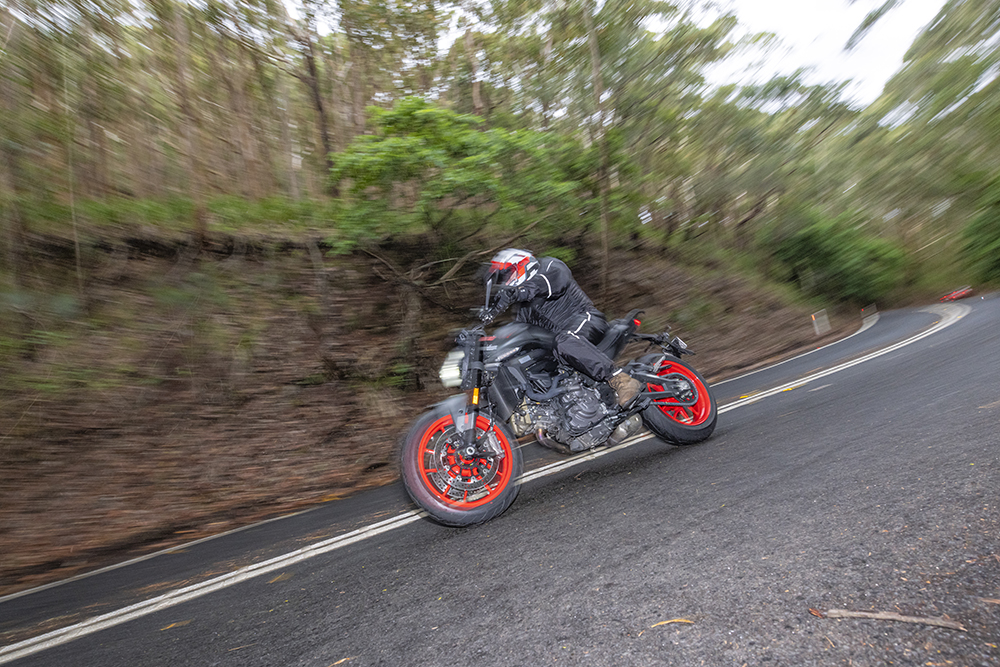 The Monster is so agile I was sure it would be a handful when the red mist came down, especially with no steering damper fitted, but it’s an absolute rock even on bumpy corners. The only negative I can think of is that it turns in so quick that I had to adjust my riding style to stop hitting apexes early.

Ducati has focused on reducing unsprung weight which makes a bigger difference to a bike’s performance than a similar sprung weight reduction. There’s a new swingarm which is claimed to be 1.6kg lighter and new wheels which shave an extra 1.7kg of the package, allowing the suspension to work more efficiently and adding to the agile ride.

In my opinion, Brembo makes the best brake packages getting around. Even though the Monster uses the mid-spec M4.32 caliper – which is lower spec than the M50 and top-shelf Stylema – they tick every box: feel, power and initial bite. The front-end carries a set of twin 320mm semi-floating rotors, with radially mounted four-piston calipers and a radial master cylinder with lever position adjustment. On the bum you get a single 245mm disc gripped by a twin piston Brembo caliper. Both ends are cornering-ABS equipped and are beyond criticism for road use. 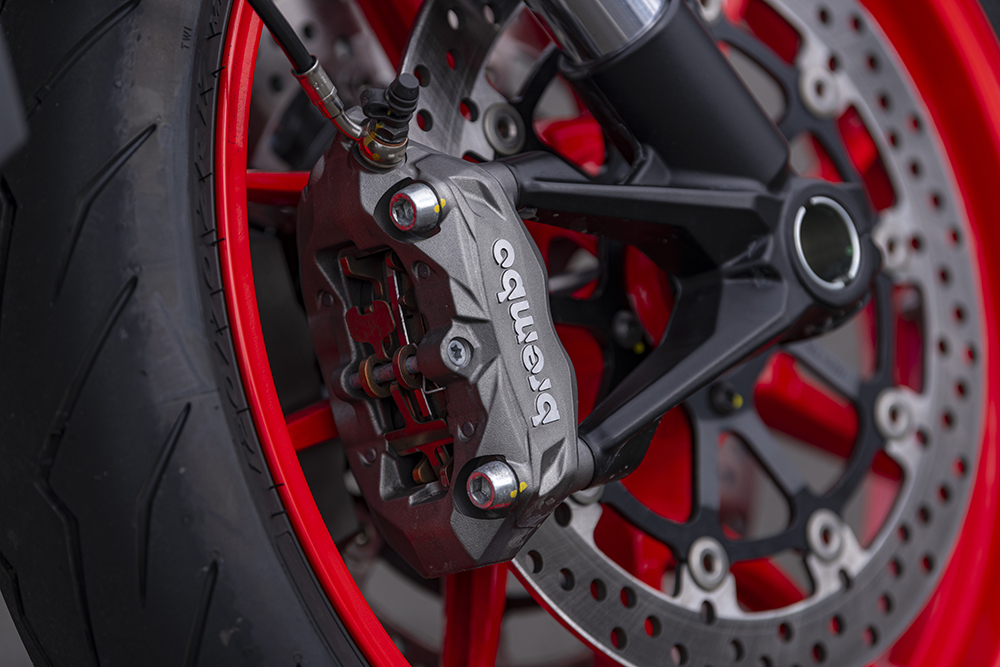 So, is it still a Monster or has Ducati turned it into just another Universal Japanese Motorcycle albeit one built in Italy? If by Monster, you mean a fun nakedbike with a thumping V-twin and excellent all-round performance, then Ducati should have called it the Monster+. Wait, that name’s taken, you can have one of those for an extra $650 bucks and you get a small screen and pillion-seat cover.

The essence of the Monster is more than intact, and is in fact better than it has ever been. When the original Monster was first released it didn’t follow the Ducati fashions of the day. It didn’t have a glossy fairing, it paved its own way and the new version is doing the same.

It may have lost its iconic trellis frame, but the new Monster is simply a better motorcycle in every way than the model it replaces. It’s one of the best roadbikes I’ve ridden because it’s just so damn fun. And that’s why we got into this game in the first place, isn’t it? To have fun? 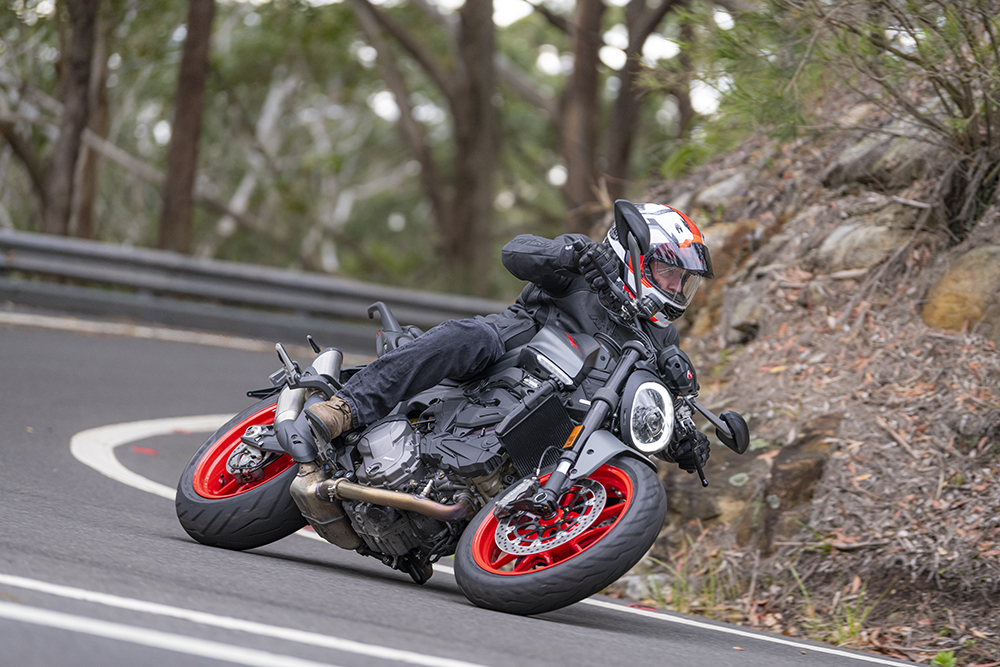 The Ducati Monster is quite simply one of the most fun bikes I tested in 2021. It’s compact and light, yet its 937cc Testastretta V-twin packs a solid punch, with a broad spread of useable torque throughout the rev range and decent top-end poke.

The Monster’s compact dimensions, light clutch and smooth V-twin make it ideally suited to plodding around town, but get it on the open road and crack the throttle open and both novice and experienced riders can’t help but have a blast on it.

The V-twin is as happy being short-shifted as it is being redlined; the up-and-down quickshifter is sublime; there’s a full array of adjustable electronic rider aids; the Brembo monobloc stoppers offer good bite, and the suspension is well sorted.

Some purists might miss the trellis frame of previous models, but I reckon the new Monster looks great with its alloy/composite chassis. The integrated front indicators are a neat styling touch, the generous pillion seat and grab handles offer practicality without spoiling the overall look, and the overall fit and finish is fantastic. And at $18,500 ride away, the Monster is great value for money. 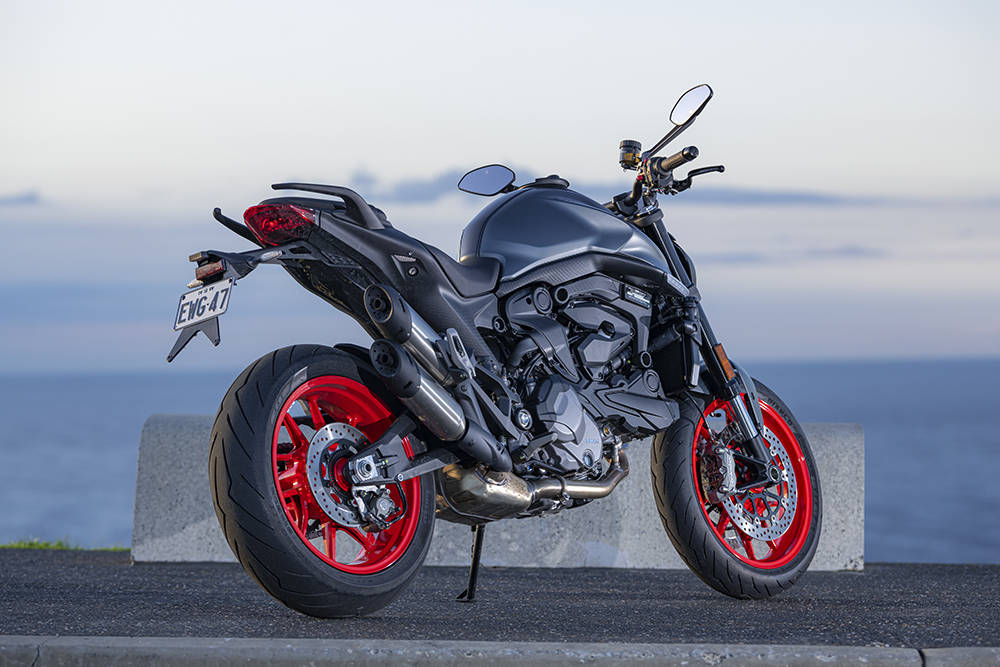