As the Dakar teams line up in Lima, KTM’s Sport Manager has a fistful of aces

“It’s been a special time for me,” says Jordi. “I was still competing when Marc Coma retired and I signed up for the role of KTM Sport Manager to advise a new generation of riders. We created our own specifically designed track at Igulada in Spain where I prepare the roadbooks for training. Morocco’s not far from here and we test there at least twice a year.

The first guy to turn up was Toby who is certainly a fast rider. And a fast learner. I’d explain a point of navigation, and next time out his roadbook would be perfect. I’m proud of the time he spent with me before his big success.”

Of Jordi’s undergraduates it was Toby Price who laid first claim to Coma’s crown, winning the 2016 Dakar. And, while Australia celebrated, it was easy to overlook that Sunderland never made the startline due to a broken right femur. And that Walkner had crashed out, being transported to La Paz Hospital in Bolivia. Which is exactly where Price terminated his title defence in 2017. So when the 2018 Dakar kicked off, Toby – who had spent the entire year in rehab – was in no way match fit, while Sunderland and Walkner had both won a round of the WCCC. Yet, in what was an eerily similar situation to Price’s disaster the previous year, Sunderland hit a buried rock, compressing his spine and causing temporary paralysis. Toby may not have been on top of his game, however he held on for a podium as Walkner took the crown.

For the very first time, the 2019 Dakar Rally will be held within the borders of a single country – the Atacama Desert region of Peru. And, as an indicator of the difficulty of the terrain, the rally has been shortened to 5000km over 10 days with all the competitive stages located in the massive Peruvian sand dunes. With his acknowledged expertise in the dunes, Sunderland appears to have an advantage. Jordi agrees. “Sam is certainly one of the favourites as we expect the event to be 80 percent sand and Sam is one rider who can open the road in the dunes and set a fast time. In other dune areas there’s a consistent wind direction which makes it easier to ‘read’ the terrain, so riders know what’s likely to happen when there’s a change of direction.

“But in Peru, there are just mountains of sand with the wind coming from all directions, making it impossible to predict what is over the next crest. And in the middle of the day the sand will be soft.

“Sam grew up riding the sand in the UAE,” Price acknowledges. “And for sure that experience is a great benefit when all you have is a compass bearing. A lot can change in the months between the course survey and the rally, and the ability to read the surface is invaluable. If the dunes are clean, a single track stands out like the proverbial, so once a few riders have been through there’s a very clear direction. But then there are sections where people have been playing in their 4WDs and buggies, so there are tracks everywhere and it’s easy to become disoriented.”

“The formula is different for Peru,” Jordi adds. “Similar to a round of the WCCC, but because it is Dakar, the intensity will be much greater. There are 15 or more riders all capable of winning a stage and, because it’s all sand, starting positions will be even more important.”

Jordi’s insights about the team are interesting. “Toby is an animal, by that I mean he is a truly instinctive rider, putting all his energy into going as fast as possible; confident and able to push the limits over all types of terrain. He feels it’s not all about eating perfect, training perfect, or even having a perfect bike; and rarely has problems with suspension setup. When another rider complains about the bike in testing I can always say, ‘Look, Toby has this tyre or that setting. He’s not complaining and is faster than you. So with the same material you can improve’.

“Matthias is the opposite. A perfectionist who always puts in 100 percent – almost obsessive about getting the most out of his bike. Sam’s always the professional and though very few riders can match him in the dunes he’s constantly looking for ways to improve. “We all try to speak English and it’s easy when talking engines and suspensions, but deeper conversations about life can become complicated. It’s easier to understand Matthias talking English – the Austrians do everything perfect. But with Sam it’s more difficult, and when Toby talks fast it’s almost impossible. When Sam and Toby are together they talk another English – it’s not the English I know.”

Jordi had previously stated that KTM have “such a strong line up sometimes we have our riders battling it out for stage and rally victories, my job is to make sure we all stay together and fight for the same goal – to always bring KTM on top.” So we asked at what point might team strategy – even team orders – come into play to avoid potential injury due to KTM teammates racing each other unnecessarily?

“It’s a difficult point for sure, with only one or two fast riders strategy is more easy to handle. But we have in our team the last three Dakar winners and the world champion. So it’s complicated. At the beginning you don’t know which rider will do best – or be brilliant in the second week. So it could prove a disaster if you tried to set a strategy in the first week. Of course we want to win as a brand and maybe, with only two days to the finish, we realise only our two riders are fighting for victory between them we would try to say something.”

“We take off each morning at three minute intervals so if you have a good day and the rider in front – and the rider behind – does the same, you may not see another rider all day. Or, your closest competitor may start five positions behind you, have a blinder, and later you’ll find out that he’s picked up 15 minutes on you.

“But it’s never over until the final chequer,” says Toby. “Though there might come a point where you realise your teammates are far better positioned than you; then it’s time to back them up – in effect to become a water boy – for the sake of the team.”

It goes without saying that Toby Price does not expect to be in such a position. But neither does Matthias Walkner. Nor Sam Sunderland. 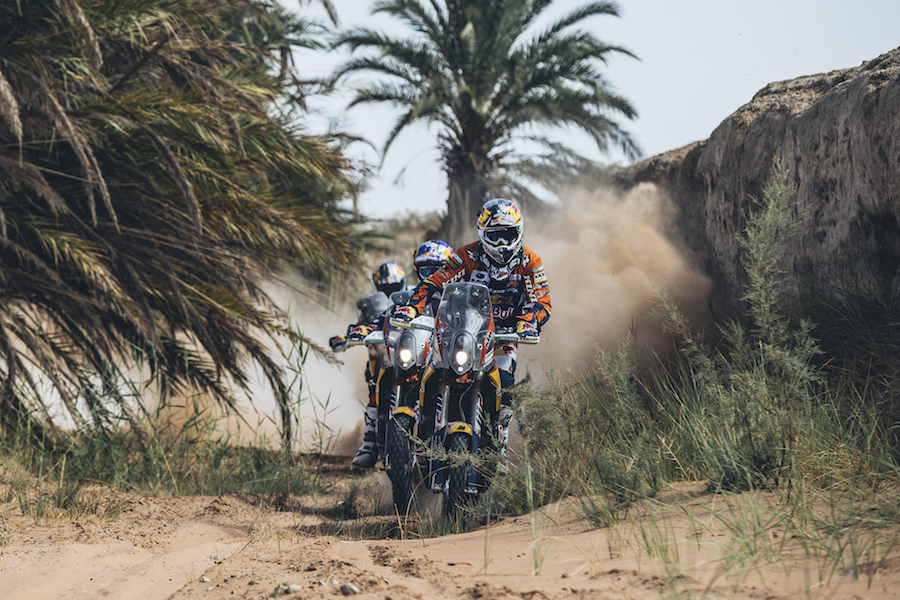 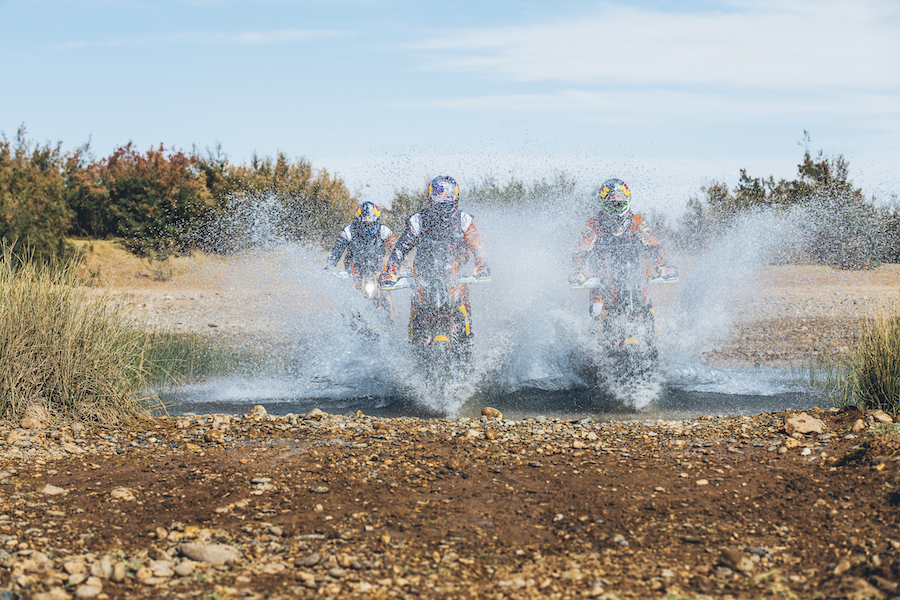