21 has been a magic number for Ducati ever since Troy Bayliss sculpted it with his victories in motorcycling history. Precisely in 2021, twenty years after winning the 2001 Superbike World Championship, Ducati is paying homage to the legendary career of the Australian rider by dedicating to him a special motorcycle, produced in a numbered series, which celebrates the first of the three World SBK titles won by Bayliss: the Ducati Panigale V2 Bayliss 1st Championship 20th Anniversary.

The bond between Bayliss and Ducati Corse in the Superbike World Championship is one of the most fascinating stories in the motorsport universe. The results of this beautiful adventure are 52 victories, 94 podiums and three world titles (2001, 2006 and 2008) won with three different bikes: the twin-cylinder 996 R, the 999 R and the 1098 R. Troy Bayliss is the only motorcycle racer in history capable of winning in MotoGP and World Superbike in the same season (2006) and his achievements in the race have indelibly imprinted the Australian’s name in the hearts of all Ducatisti. Now the winning chemistry between Ducati and “Baylisstic” is rekindled with the creation of this celebratory motorcycle, the name of which was chosen directly by the rider, who also actively contributed to the creation of the graphic concept. 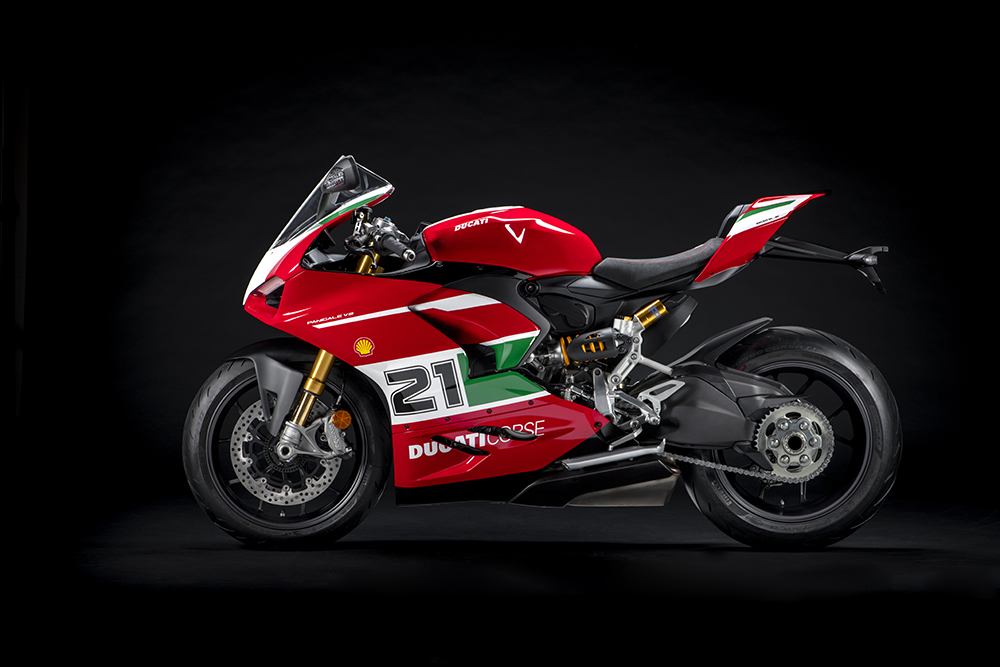 Made starting from the base of the Panigale V2, the “Bayliss 1st Championship 20th Anniversary” version is characterized by its special livery, whose graphics are inspired by that of the 996 R which in the 2001 season powered Bayliss to the conquest of his first world title, revisiting its colours and cuts. Ducati red is the main colour of the bike, and it joins green and white in a tribute to the Italian spirit of the Bologna-based motorcycle manufacturer, while the iconic #21, Troy Bayliss’ race number, and the Shell logo, which visually strengthen the link with the racing bike, stand out on the sides and front. Troy’s autograph is reproduced on the fuel tank, while the billet aluminium triple clamp shows the name of the bike and the progressive numbering of this unique model. 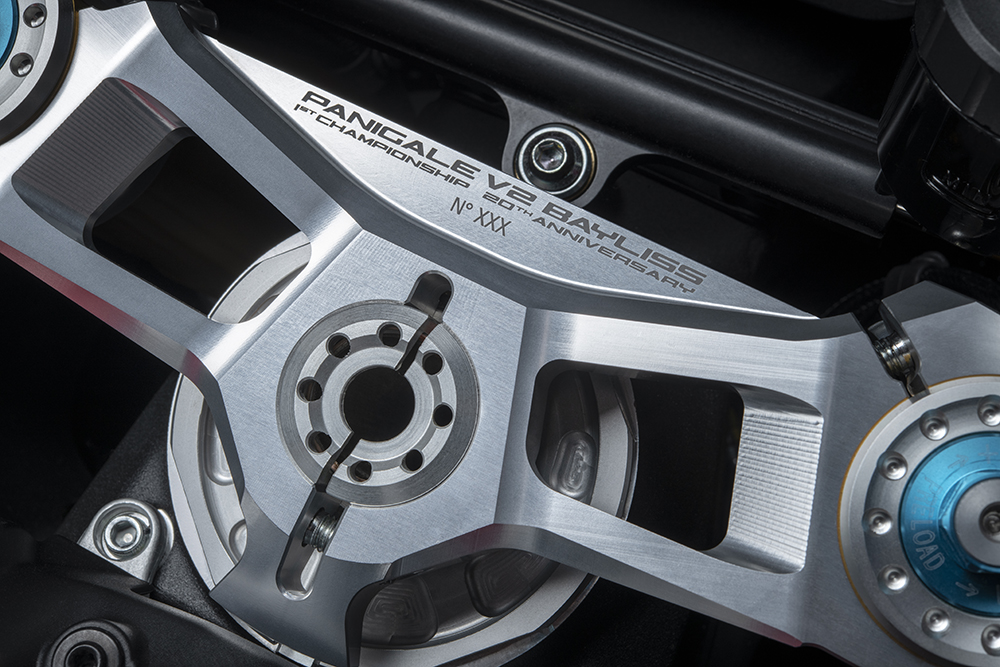 To make the motorcycle even more effective in track riding, Ducati has chosen to equip the Panigale V2 Bayliss 1st Championship 20th Anniversary with Öhlins components. The NX30 front fork and TTX36 rear shock absorber guarantee maximum smoothness and are designed to achieve the best performance on the circuit, with a set-up that makes the bike more precise and offers the rider greater feeling and greater support in all riding phases. The steering damper, thanks to the adjustments it is equipped with, allows you to customize its calibration by adapting it to riding style and the characteristics of the track. 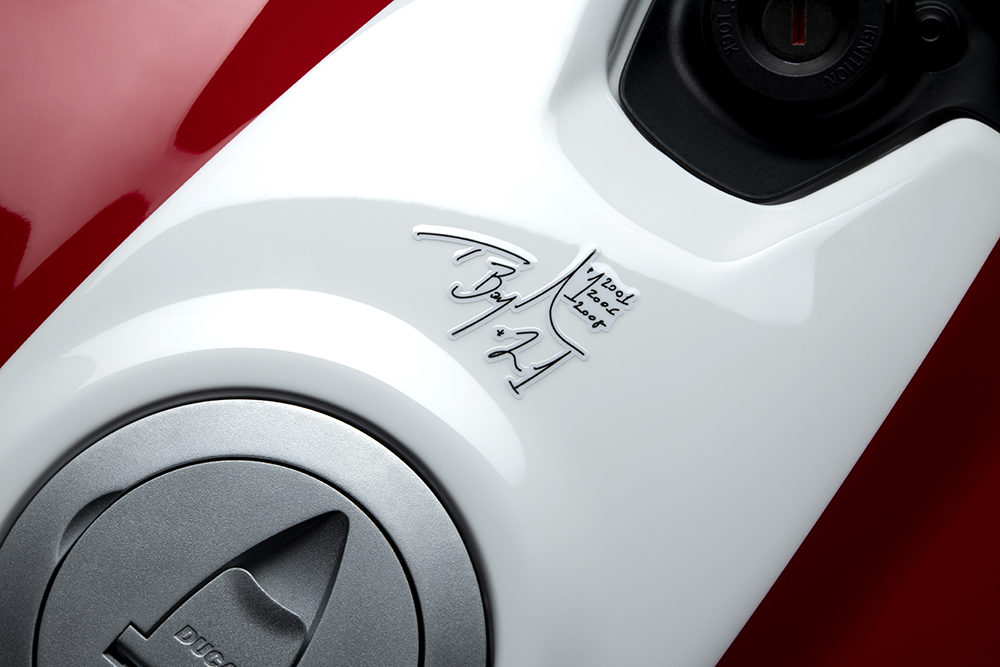 Compared to the standard version, the Panigale V2 Bayliss 1st Championship 20th Anniversary is also 3 kg lighter, thanks to the adoption of a lithium-ion battery and the choice of the single-seater configuration that explicitly recalls the look of the racing bike (passenger seat and footrests are available in the equipment supplied). 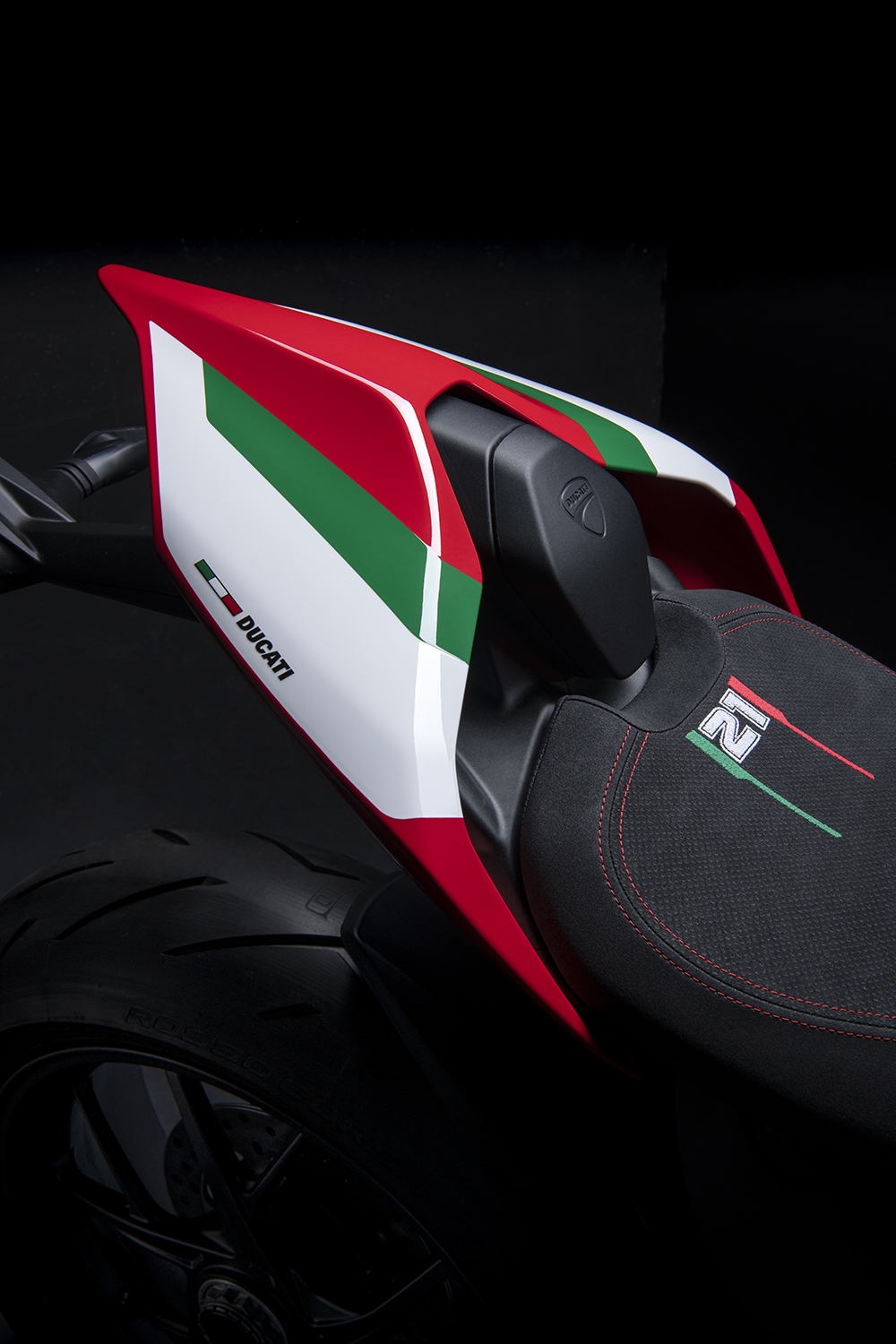 The equipment is completed by the sport grips, the silencer outlet cover in carbon fibre and titanium and the rider seat made by combining two different technical materials with double red stitching. Troy’s number 21 is embroidered on the saddle and, together with the green and red bands, makes up the Italian flag. The motorcycle is also equipped with self-cleaning brake and clutch pumps with smoke grey oil tanks. 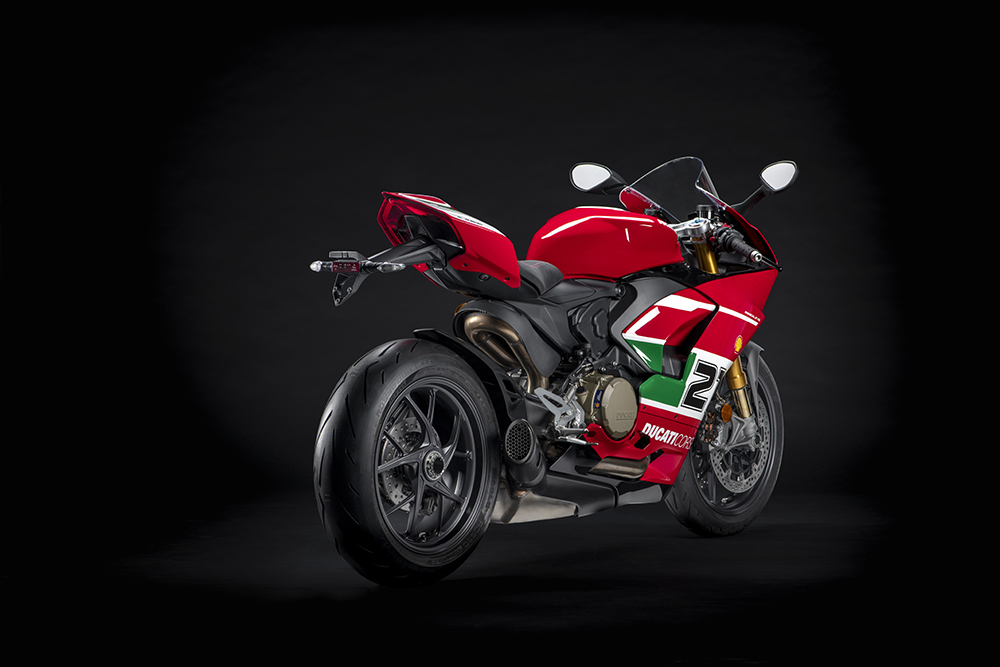 The Panigale V2 is the super-mid of Ducati sports bikes and represents the entry model to the Panigale family. It is powered by the 955 cc Superquadro twin-cylinder unit (Euro 5 compliant), with a maximum power of 155 hp at 10,750 rpm and a maximum torque of 104 Nm at 9,000 rpm. The chassis is based on the monocoque frame, while the elegant and sporty design is inspired by that of the Panigale V4. 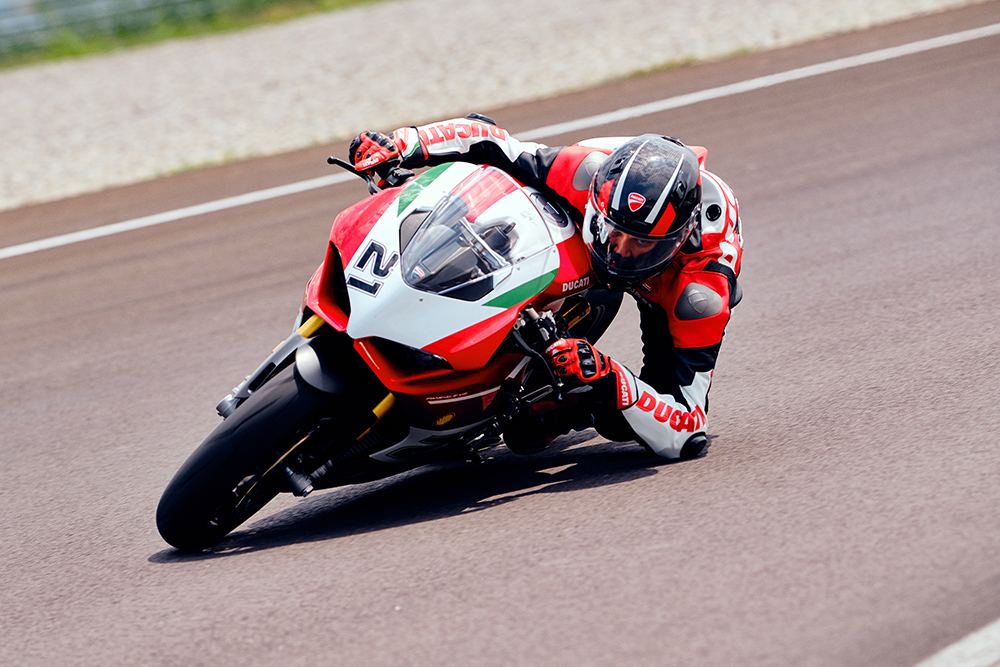 The electronic package, dedicated to active safety and vehicle dynamics control, includes the “cornering” function applied to Bosch ABS, the electronic quick shift that also works when downshifting and traction, engine brake and wheelie controls (Ducati Quick Shift, Ducati Traction Control, Ducati Wheelie Control, Engine Brake Control). All the controls are integrated into the three Riding Modes (Race, Sport and Street) that can be modified using the 4.3″ colour TFT dashboard with graphics and interface designed to make menu navigation and settings adjustment intuitive, as well as immediate identification of the selected Riding Mode. 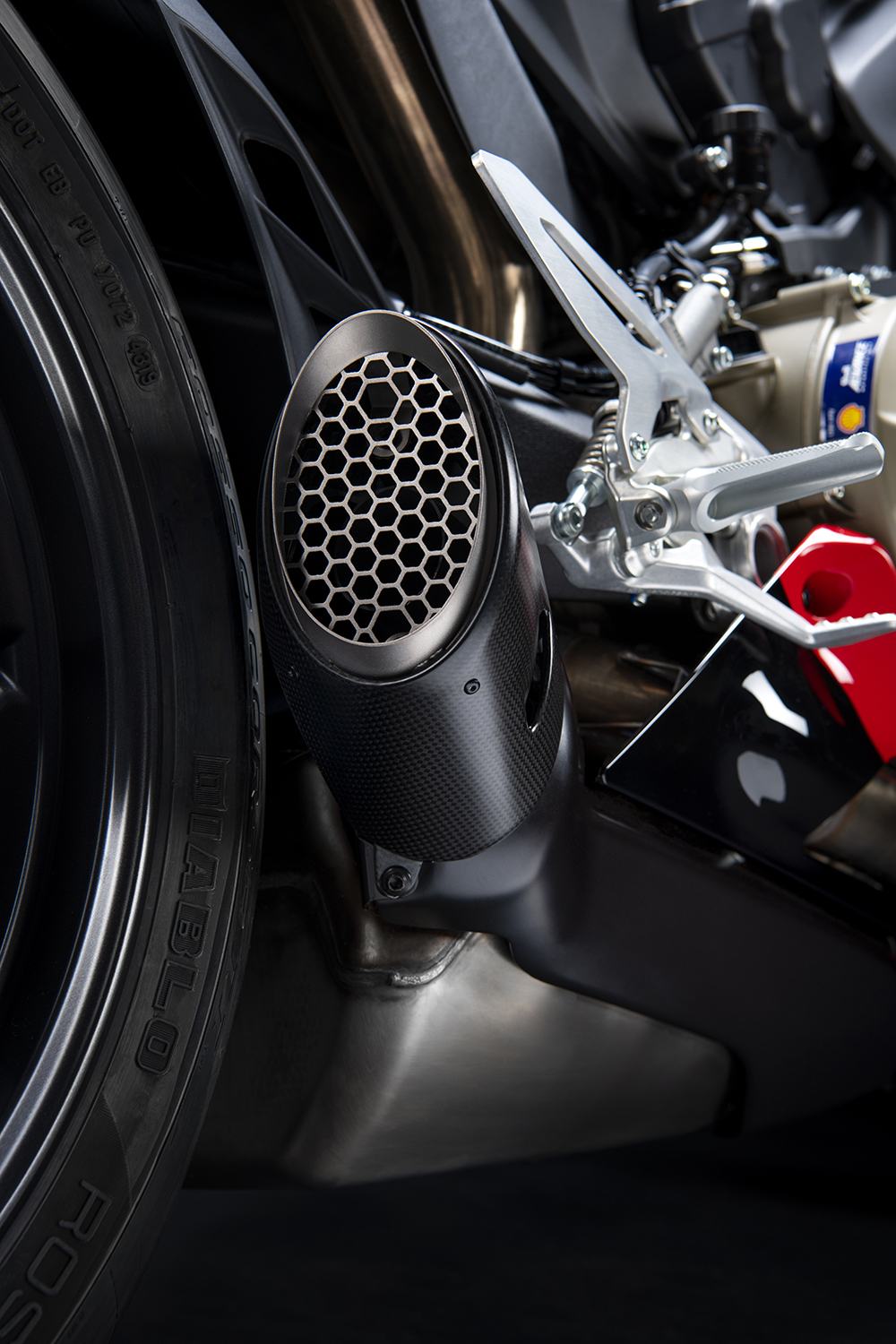 The bike was officially presented by Ducati in a special episode of the Ducati World Première made at the Museo Ducati, on the track and at Troy’s home in Australia. Ducati CEO Claudio Domenicali, Ducati Corse Team Manager Davide Tardozzi, who was alongside Bayliss throughout his career in Ducati, Director of the Centro Stile Ducati Andrea Ferraresi and Ducati Head of Product Communications Giulio Fabbri all contributed to the presentation of the characteristics of the bike and the storytelling of the incredible relationship between Ducati and Bayliss. Troy himself took part in this video, sharing with Ducatisti his most indelible memories and emotions experienced on the bike.

The World Superbike universe will also pay tribute to Bayliss’s career during Round 5 of the season, scheduled for the weekend at the Assen track. On Friday 23 July at 13.00 (CEST), the Australian champion will be the protagonist of a virtual press conference at the Paddock Show together with Ducati Corse Sporting Director Paolo Ciabatti, in which the most important stages of the victory of Troy’s first title, won on the Dutch circuit, will be remembered. On Sunday 25 July at 12.05 (CEST), after the SuperPole Race, the Panigale V2 Bayliss 1st Championship 20th Anniversary will complete a lap of honour on the track, ridden by Aruba.it Racing – Ducati factory rider Michael Ruben Rinaldi, who competes in WorldSBK with the same number as Bayliss. 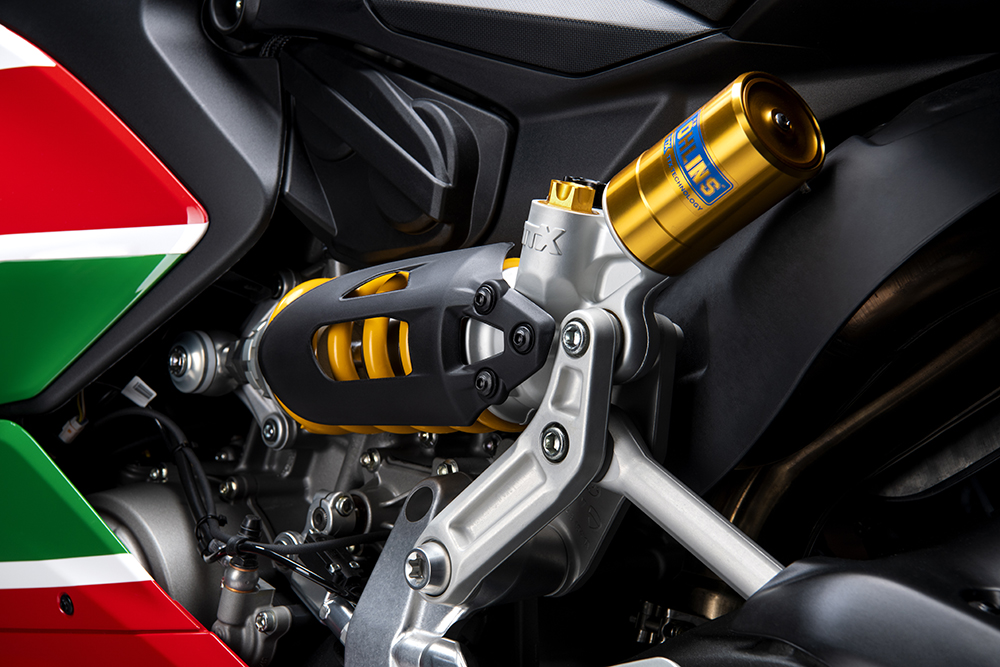 The Panigale V2 Bayliss 1st Championship 20th Anniversary will be available in Australia and New Zealand from January 2022 with an Australian ride away price of $27,489. 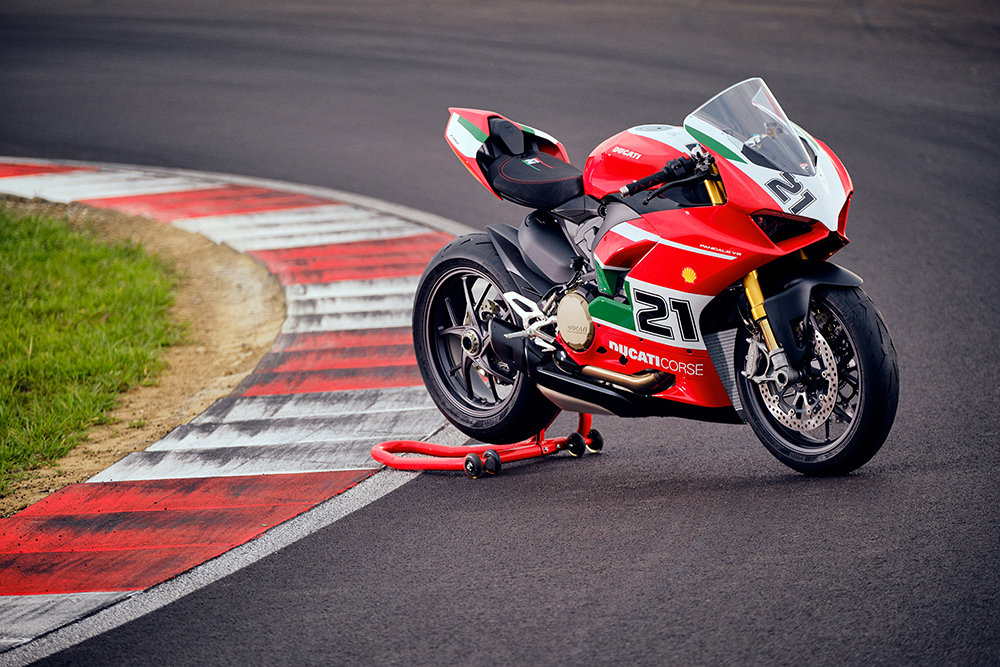