CFMoto has upped the wow-factor with its 650NK SP, but is it worth a grand more than the base model?

Less than $8000 ride away for a 650cc parallel-twin bike that looks fantastic, offers just about all the performance a LAMS-compliant bike is allowed to and it’s covered by a three-year warranty? Surely newbie riders would be lining up at the dealership door, right? Well, CFMoto importer Mojo Motorcycles reckons it’s on track to sell around 250 650NKs this year and that, despite the price premium, the up-spec 650NK SP Edition will likely account for 50 percent of those sales, which shows that even bargain hunters don’t mind opening their wallets when it comes to a good deal. 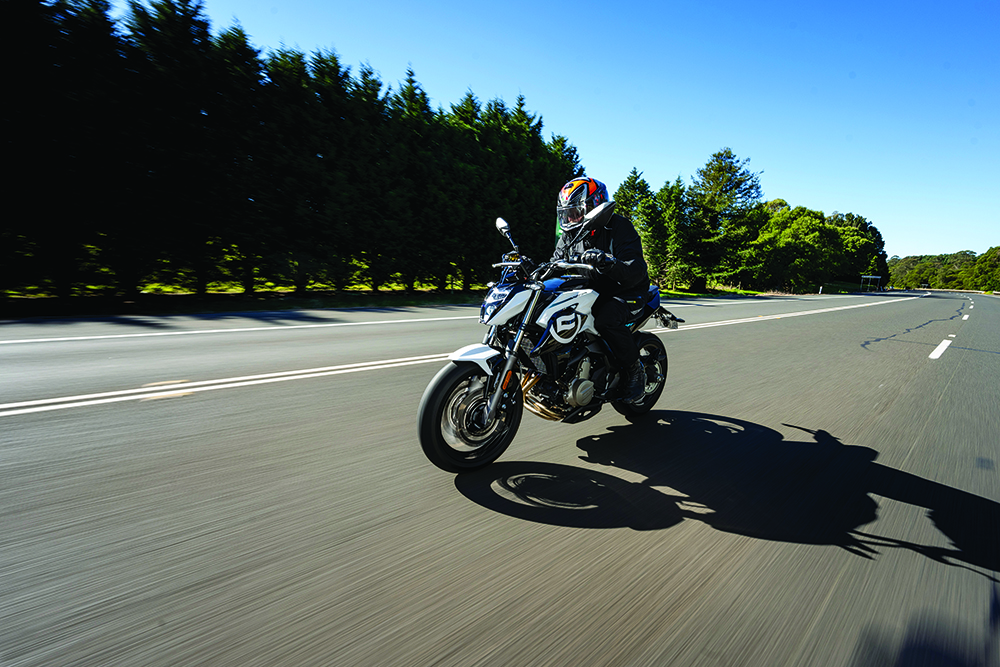 At $7790 ride away (with six-months rego, or $7990 ride away in states that only offer 12-months registration), the 650NK SP Edition is a full grand dearer than the base-spec 650NK, but it’s still a relative bargain for the amount of bike on offer. After all, where else can you get a brand-new 650 twin with a slipper clutch, Bosch fuel injection, Continental ABS, selectable rider modes, a five-inch colour TFT display and Pirelli Angel rubber for the money?

That parallel twin makes a claimed 41.5kW of power at 9500rpm and 62Nm of torque at 7000rpm, which is just shy of the LAMS maximum output for a bike weighing 193kg (dry). And while peak outputs are always good for bragging rights at the pub, it’s the way the engine makes its power that will most please novice riders, whether they realise it or not. 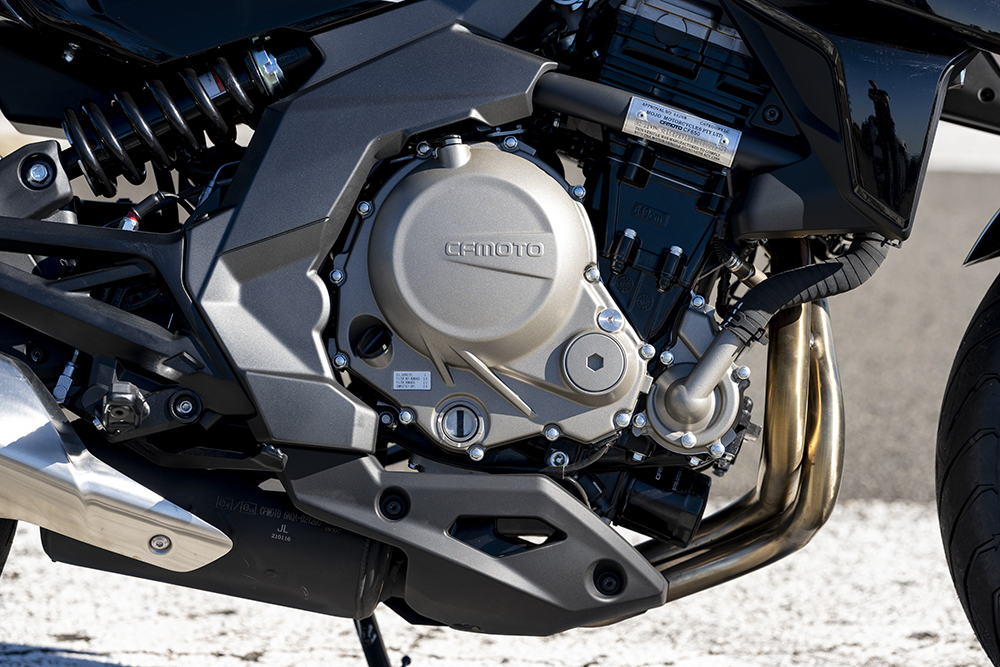 With plenty of torque from low in the rev range, the 650NK SP is well suited to those with lazy left appendages. Couldn’t be arsed downshifting in traffic? No worries, just leave it in a taller gear and when you need to pick up speed again the engine will pull away from as low as 3000rpm.

Having said that, the fuelling on our test bike wasn’t perfect; it coughed on occasion when snapped open from a fully closed throttle, but when just poking along in traffic it feels well sorted. 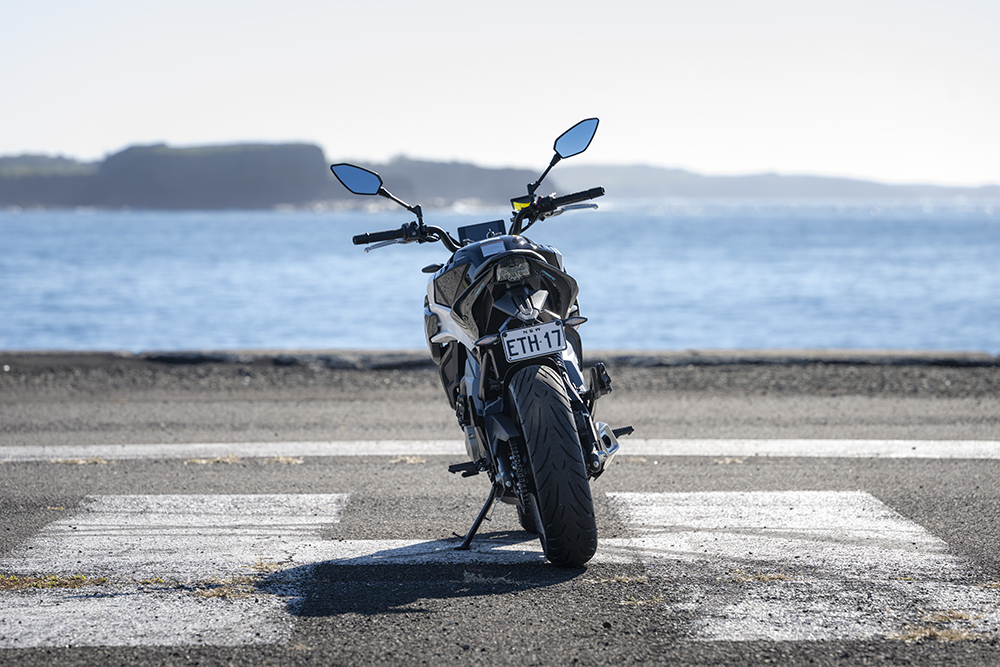 I reckon the torque curve would be quite flat, too, because as well as its strong bottom-end, there’s plenty of mumbo in the midrange, which is just what you want in a LAMS bike, allowing the novice rider to focus on cornering, braking and keeping it smooth rather than constantly shifting gears and trying to stay in a narrow power band.

Want more though? Exploring the upper half of the rev range delivers enough power to keep more experienced riders interested… but it isn’t delivered in such a way that it’s going to scare anyone. Having said that, there’s a small kick higher up in the rev range, but power tapers off beyond 9000rpm, so there’s not a lot of point in revving the engine to the 10,000rpm redline. Unless you like the sound of the exhaust note, which would be quite deep and possibly entertaining if it wasn’t so heavily muffled. 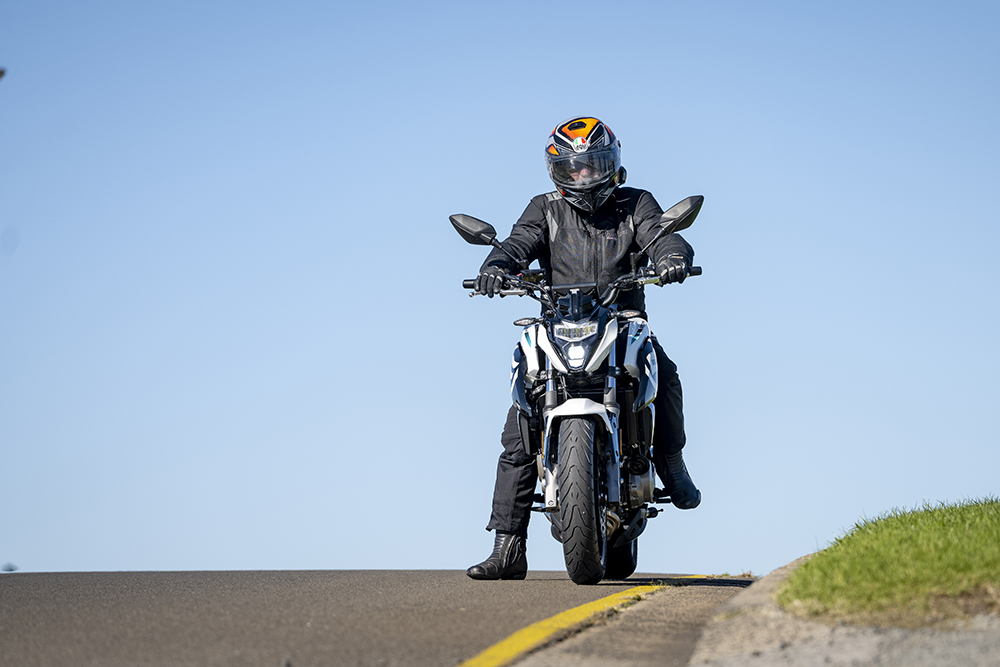 Oh, I almost forgot to mention there are two rider modes: Eco and Sport. These are selectable via a button on the left switch-block, and they are forgetful because they’re not all that notable; other than changing the display on the TFT screen, switching between the two rider modes doesn’t seem to have any effect on engine performance at all, so pick the dash display you best like and stick to it.

CFMoto says the SP Edition’s six-speed gearbox has been “enhanced” for optimised gear changes. Despite this the ’box feels a little clunky on occasion, especially between first and second, and picking neutral when you come to a stop can sometimes be a hit-and-miss affair. 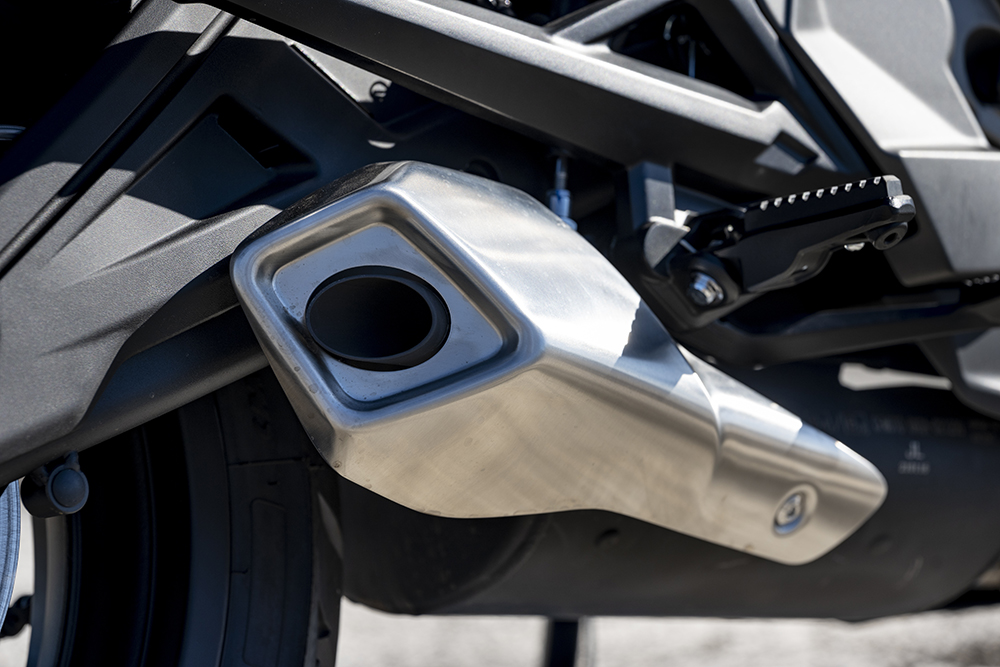 What I do like about the gearbox is the good spread of ratios that make the most of the engine’s linear power delivery, and the light and progressive clutch action. The slipper clutch also comes in handy when downshifting, preventing the rear from locking up.

On the open road the 650NK SP cruises along happily in top gear with 4000rpm or so showing on the digital tacho, and on test we recorded an average fuel consumption of 4.8L/100km, which equates to more than 300km between refills. 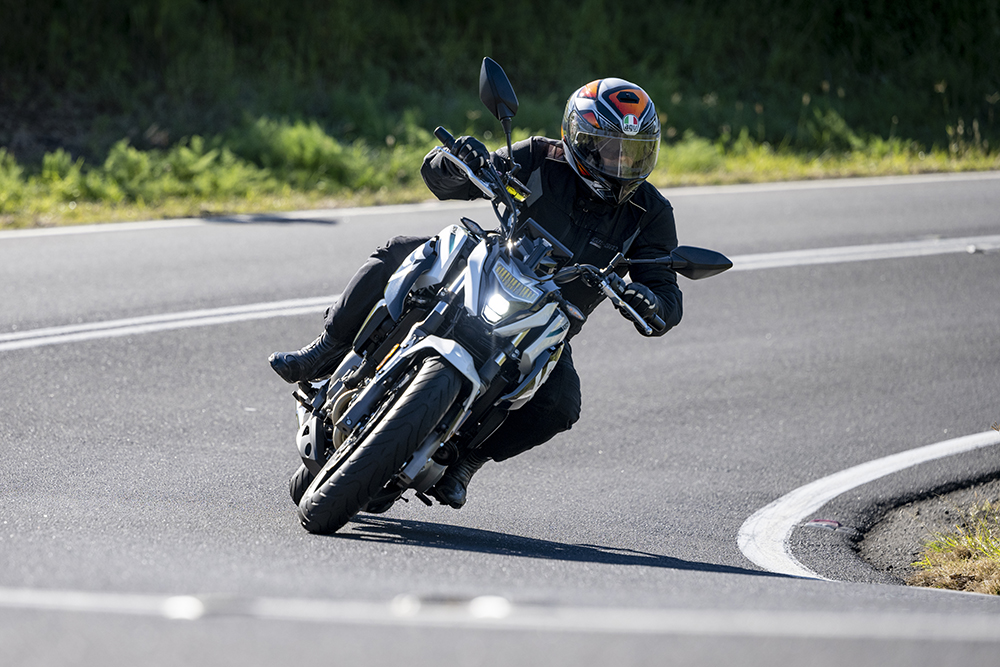 You’d probably want to get off for a stretch well before 300 clicks though; the seat is quite narrow and firm, and there’s not a lot of space to shift your bum back to get into a crouch, so taller riders might find the 650NK SP cramped. For a shorty like me though, the reach to the high and wide-ish handlebar is relaxed and the footpegs are in a comfortable position, while the seat shape and low 795mm seat height makes it easy to put both feet on the ground. 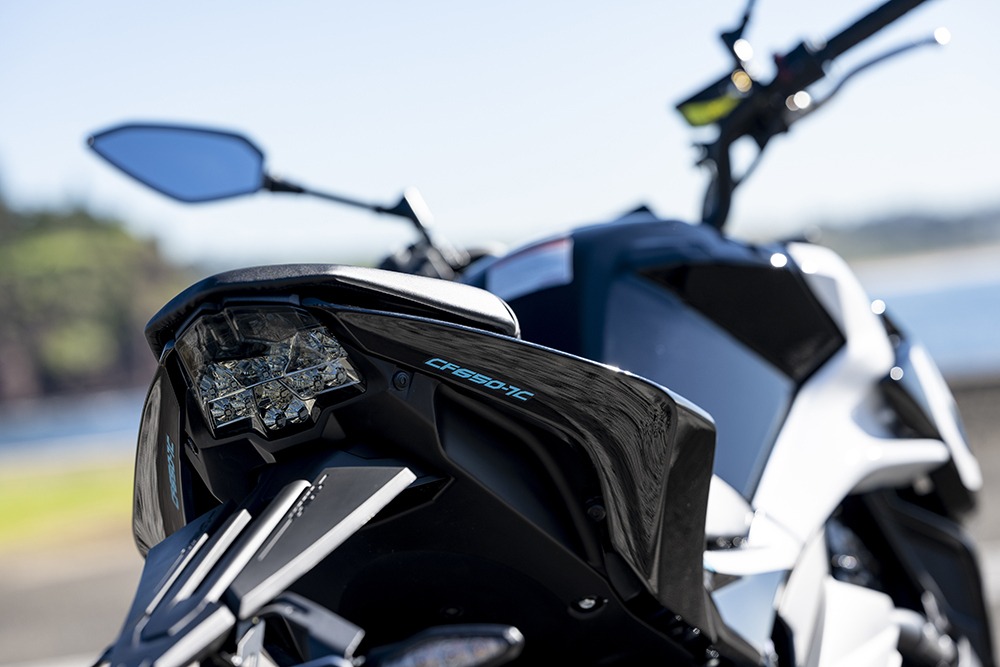 That low seat makes the 650NK SP easy to manoeuvre around town and although it’s not super light, it feels as though the bulk of the weight is carried quite low in the frame.

The wide ’bar makes it easy to tip the 650NK SP into corners and it holds a line well, but while the suspension is compliant enough on smooth blacktop, over bumpier surfaces it can start to feel a bit harsh, particularly at the rear. Up front there’s no adjustment for the conventional 43mm KYB fork but the standard setting feels like a good compromise for a variety of road surfaces. Down the back, however, the cantilever rear shock doesn’t like big hits. 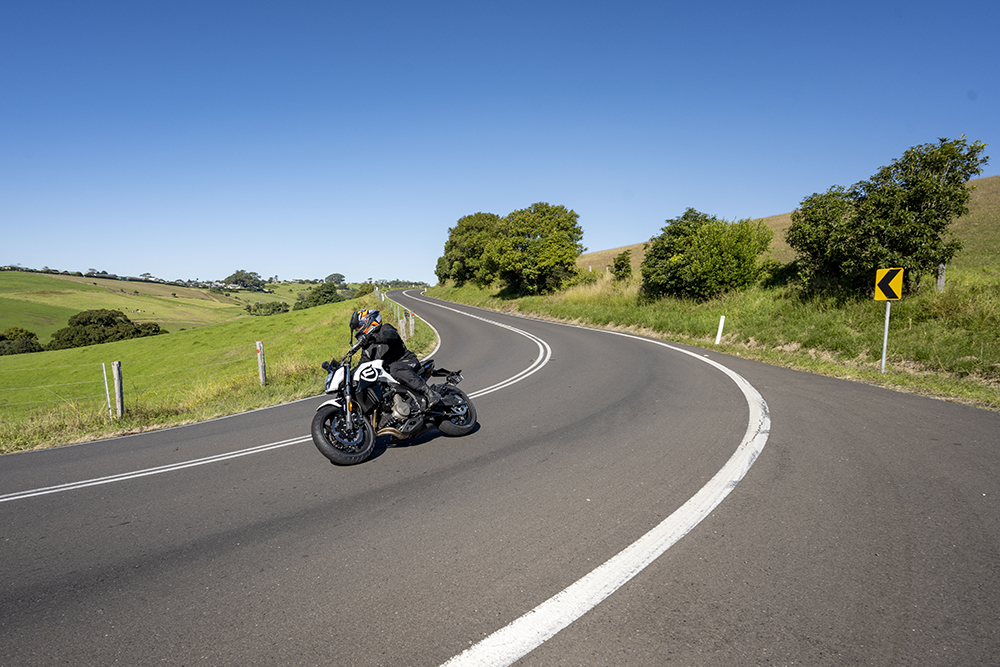 Nothing to complain about with the Pirelli Angel STs, either; they are more than a match for a bike of this calibre and no doubt aid in the good front-end feel. They also offer decent grip on damp roads.

In the brochure for the 650NK SP, CFMoto makes a bit of a big deal out of the fitment of J.Juan brakes with Continental ABS, and there’s no doubting braking performance is more than a match for the performance on offer. The ABS works as expected – not too intrusive but there when you need it – and brake feel is quite good, while the fitment of braided brake lines is a nice touch. 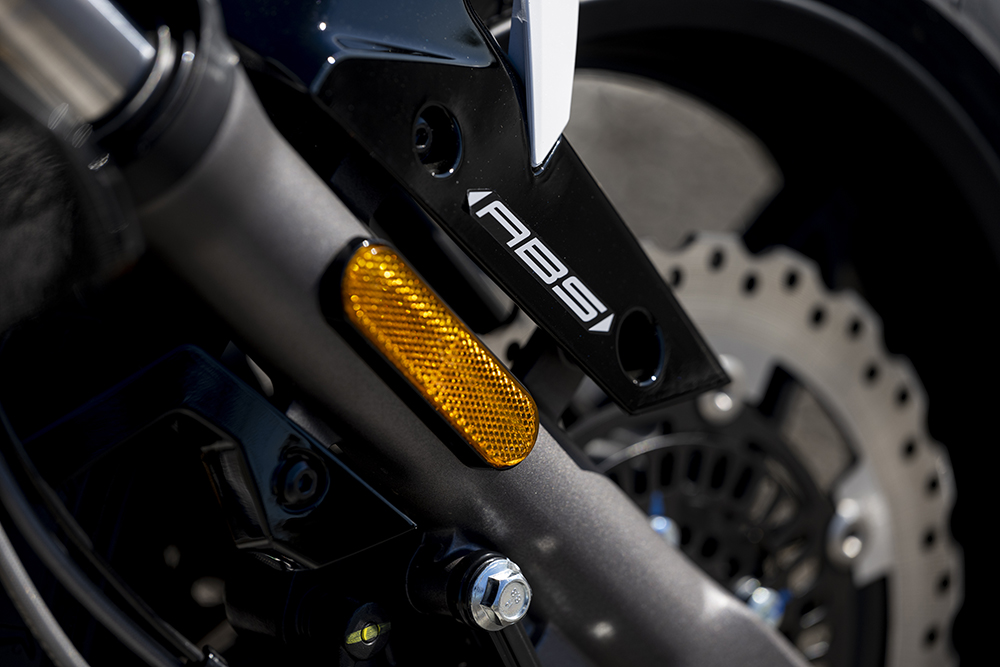 You’re out in the elements when riding any naked and, in the case of the 650NK SP, there’s nothing but the aforementioned five-inch colour TFT display in front of you. The screen on that display is bright and the digital speedo, gear-position indicator and tacho are easy to read, but some of the secondary info like the clock and tripmeter can be difficult to decipher when riding, and without familiarisation you sometimes need a second glance to distinguish between the temp and fuel gauges. As mentioned, there are two display modes – Eco and Sport – and while the fuel gauge and coolant temperature are easier to read in Eco mode, it’s still hard to read the odo, trip, voltage and time in either mode. 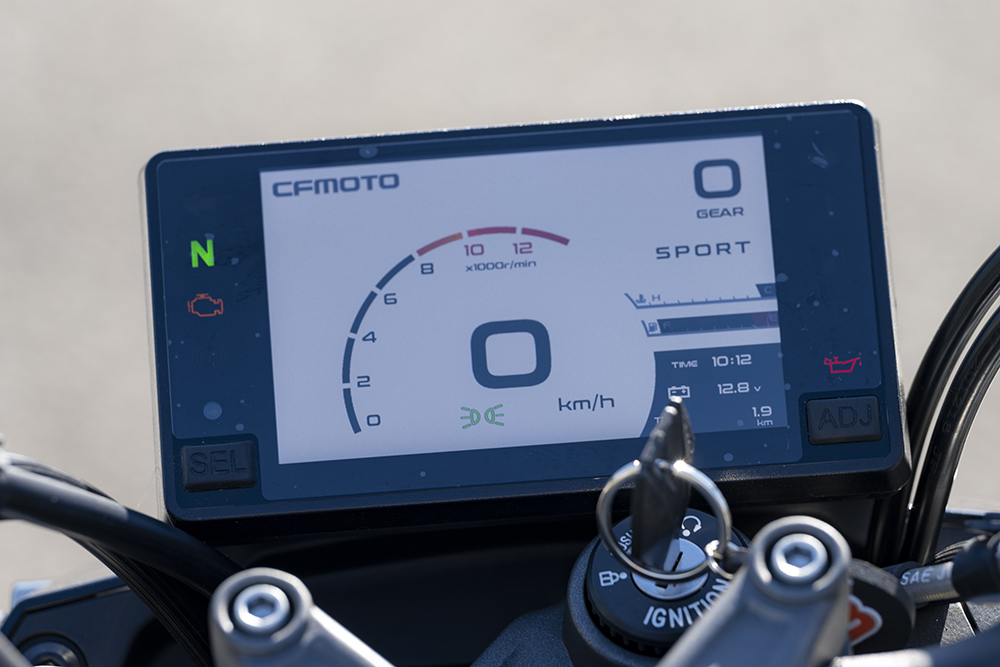 The switchgear is basic but of reasonable quality and all the controls are positioned where you’d expect to find them. Both the clutch and brake levers are span adjustable and, while the mirrors look a bit like Dame Edna’s glasses, they are big and high enough to offer a decent view of what’s going on behind and around you, although they do get a bit vibey at certain engine revs.

Want to throw a pillion on the back? Short rides only, I’m afraid. The seat is small, high and not very well padded but, hey, this is a LAMS bike, so no pillions allowed, right? At least not for P1 riders. Having said that, there are decent grab handles in the rear bodywork and the pillion ’pegs aren’t too high. 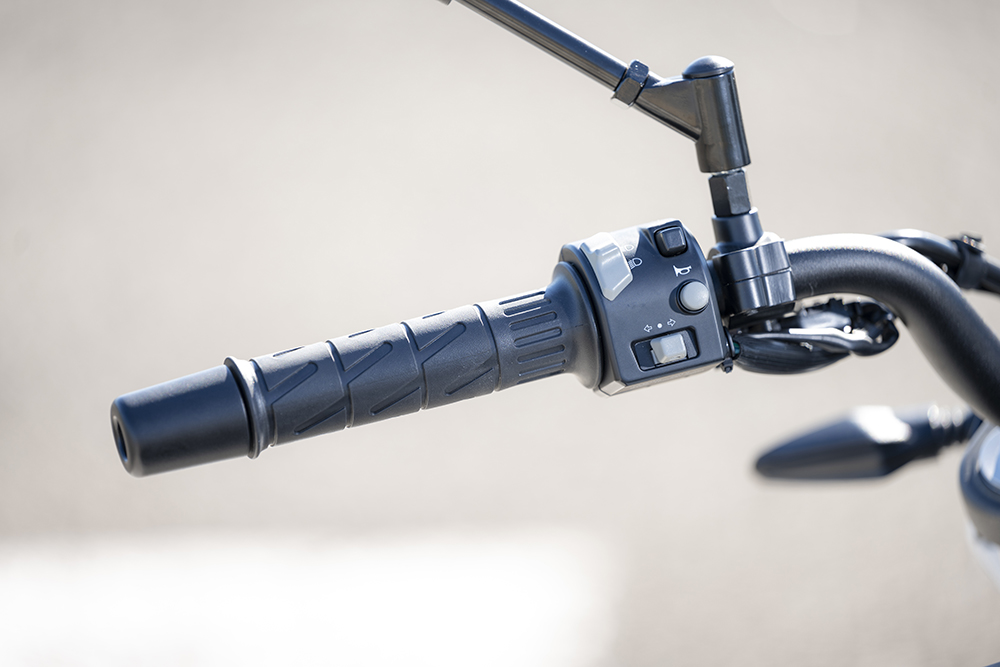 You’d be hard-pressed to secure luggage to the back seat without scratching the plastics, but the fuel-tank shape looks well suited to a tank bag with a flat and wide profile. There is stuff-all space under the pillion seat to stow anything and there was no toolkit nor owner’s manual supplied with our test bike, and I’ve no idea where you’d stow them; you need an Allen key to get under the rider’s seat.

Overall fit and finish is pretty good and there’s no denying that the Kiska-styled 650NK SP is a good-looking bike… Kiska is German automotive style house responsible for the design of various bikes including several KTM and Husqvarna models. This being the case, it’s no surprise that the 650 NK SP’s LED headlight has a definite KTM style about it, and likewise for the stubby exhaust. I also reckon the SP Edition graphics are more flash than the base model’s. 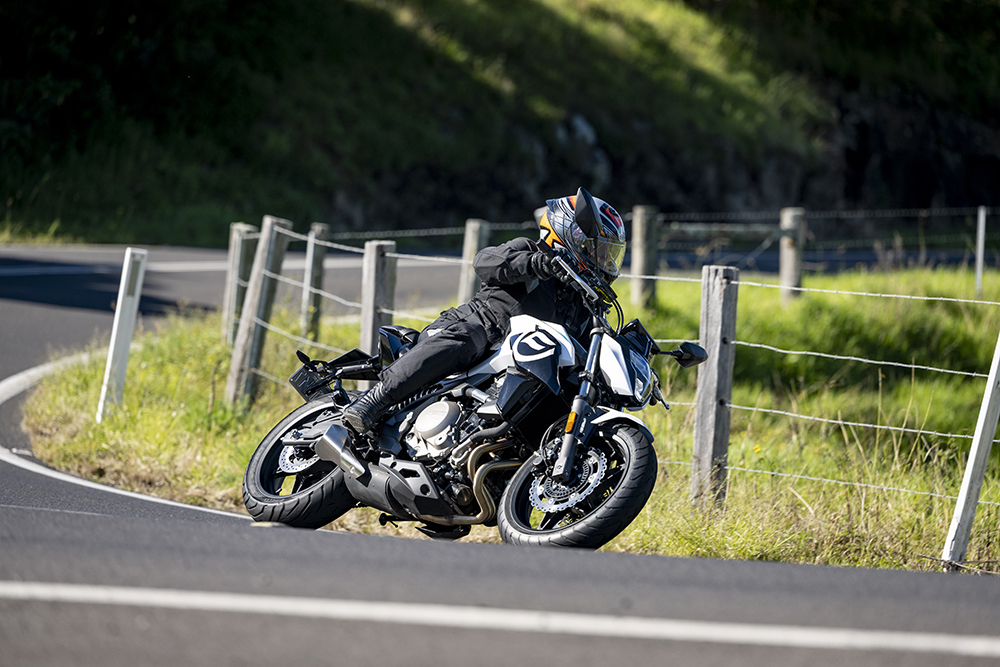 There’s no doubt the sub-$8000 ride-away 650NK SP is a compelling argument for those after a LAMS-compliant bike that will also keep them content as they progress from novice to more experienced rider; it really is a lot of bike for the money, it’s easy to ride and it has enough performance for the developing rider. And the three-year warranty should allay any fears about the CFMoto brand. 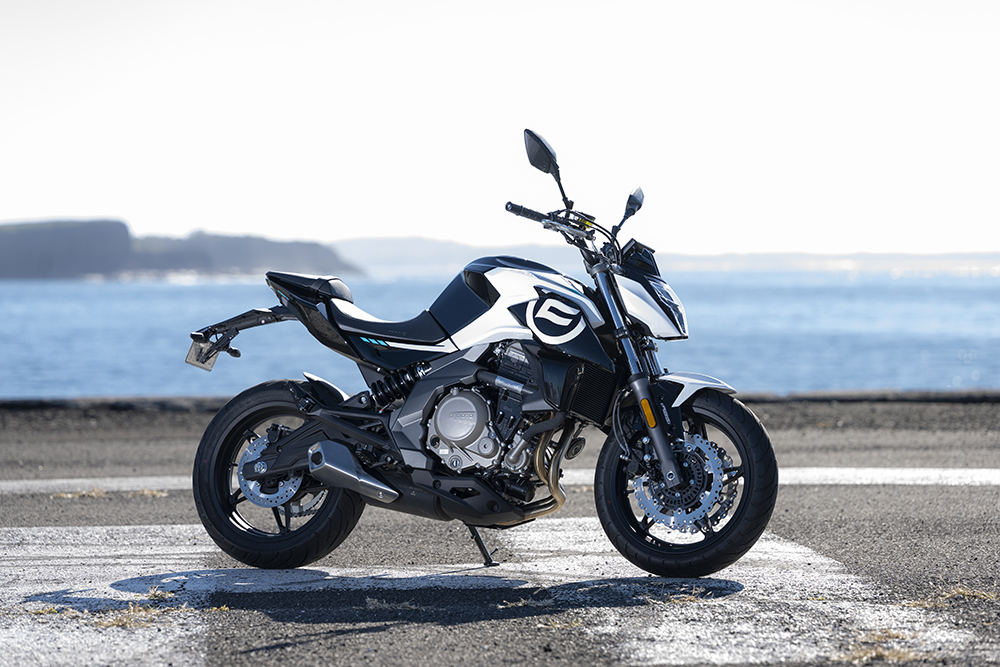