You know that handful of things that sat the Yamaha MT-09 at the budget end of the midsized nakedbike market? Well, you can forget them

When the Yamaha MT-09 was released back in 2013 it became responsible for bringing one of the most fun and engaging roadbikes to the market. Not only was the MT fun, but it was also reasonably comfortable, sported unique and edgy new looks, and represented excellent value for money. But the kicker was its new Cross-Plane triple cylinder engine; that sweet, sweet, charismatic 847cc CP3 engine ensured that the Yamaha MT-09 would become a massive success for Yamaha putting a smile on the dial of hundreds of thousands of riders across the globe.

The MT-09 copped a bunch of updates in 2017 mainly focussed on fuelling and suspension refinement which improved on an already fantastic and much-loved package. But nothing’s perfect and with the spectre of Euro5 looming over the MT-09, Yamaha went back to the drawing board and has come back with an all-new MT-09 and up-spec MT-09 SP that addresses the shortcomings of the previous model, improves on its good points and even gives the engine a kick in the pants as well. 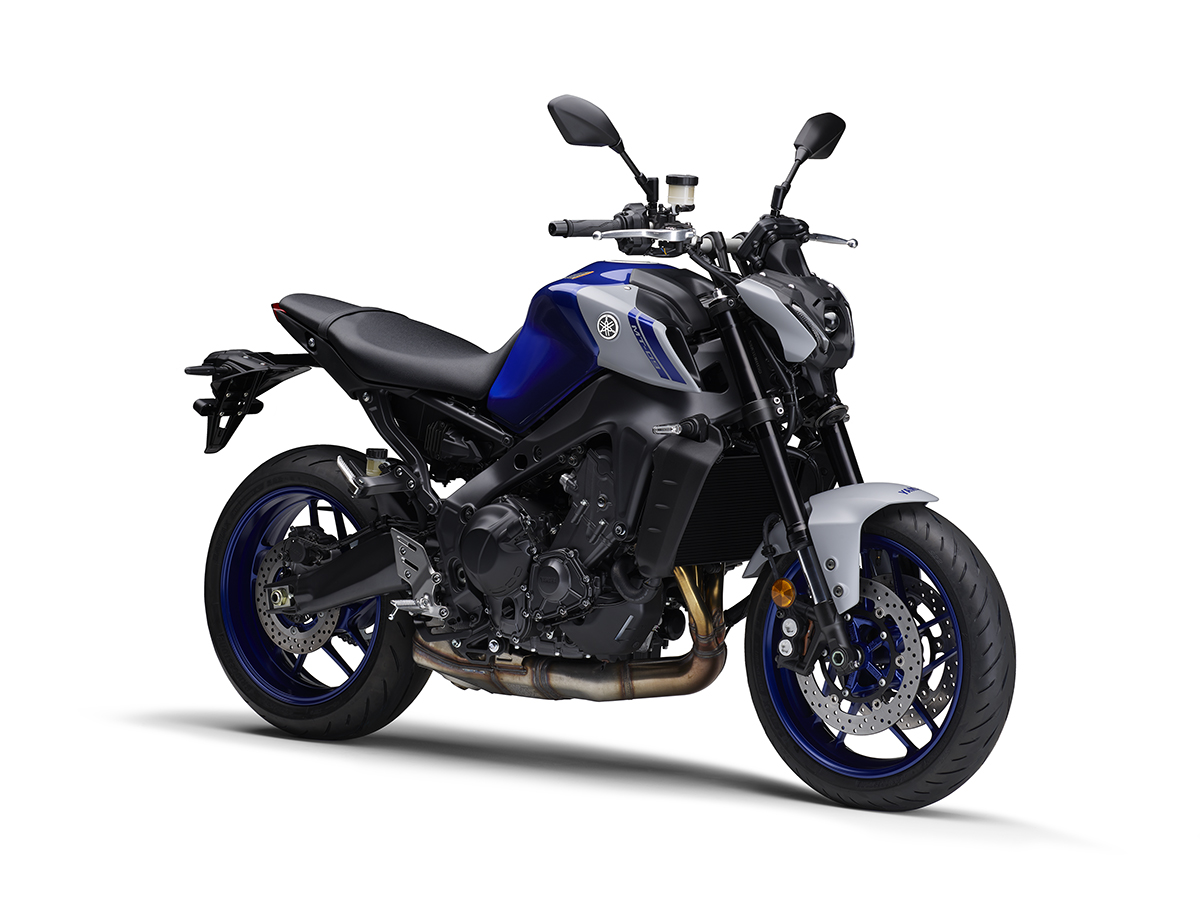 The Euro-5 compliant CP3 is all new for 2021. Among the conglomerate of new engine features, the big news is a capacity hike of 42cc, via a 3mm longer stroke out to 889cc, which has netted a three per cent increase in peak power (87.5kW at 10,000rpm) and a decent six per cent increase in torque (93Nm at 7000rpm). The CP3 is also 1.7kg lighter than its predecessor despite an increase in crankshaft mass to further enhance the sensation of more torque.

The new CP3 is a case of same, same but different; it’s lost none of its character and none of its performance. The extra inertia generated by the increase in crankshaft mass gives the 2021 CP3 a meatier and torquier feel that makes it easier to be smoother on the throttle. This is no doubt a consequence of refinements to the fuel injection system and the new ride-by-wire throttle as well. 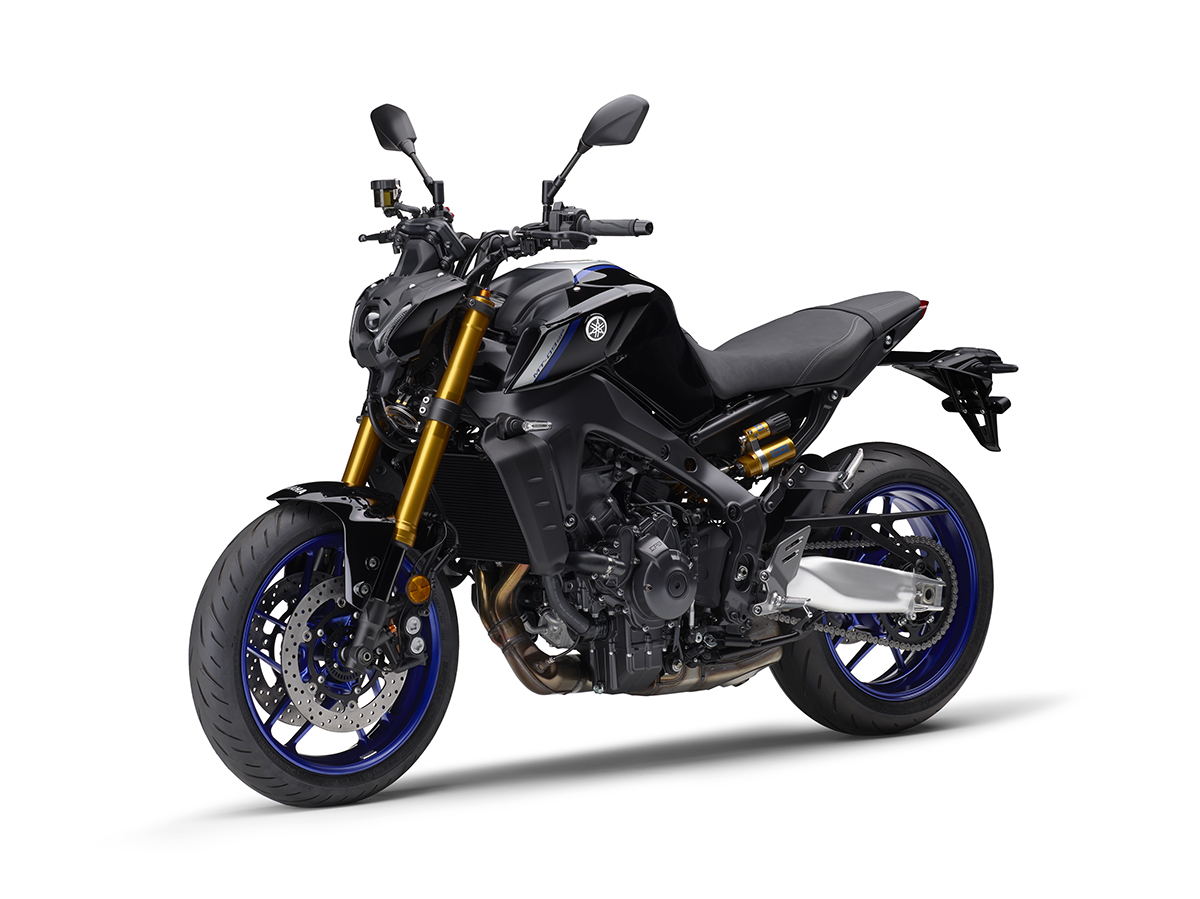 There’s also an increased willingness to loft the front wheel when you ask it to, and some clutch intervention has the front wheel easily heading skyward in third gear. And because wheelies weren’t easy enough on the old versions, along with the extra punch, Yamaha has bunged a two-way quickshifter on for seamless changes through the revised six-speed ’box – it works well the majority of the time, but there was a couple of times where you’d find a momentary false neutral. A false neutral on the MT doesn’t involve wailing engines and awkward looks from bystanders, though, it just cuts the power and then slips into gear as you roll along. 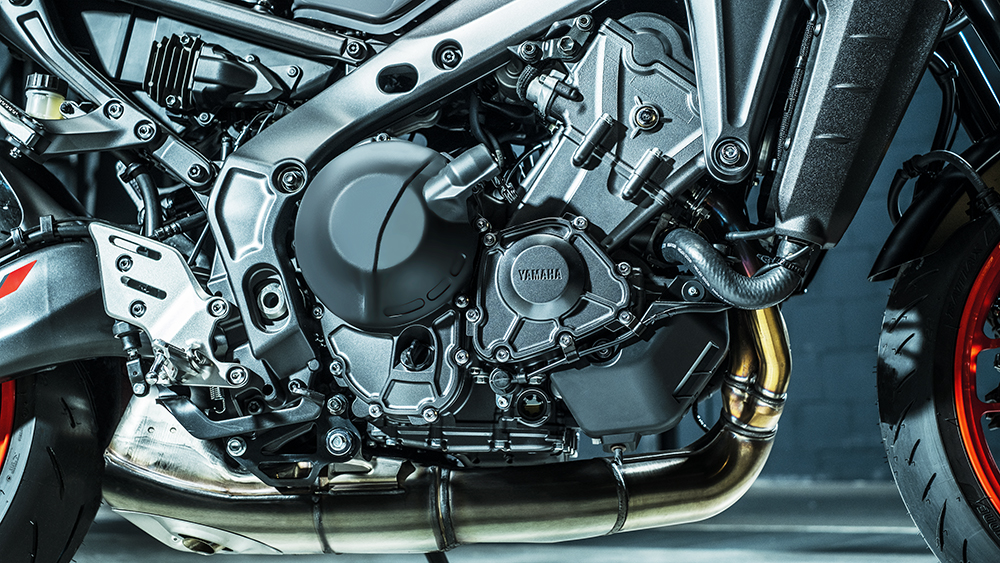 To meet Euro5 the MTs are equipped with a new exhaust that is 1.4kg lighter and tucked away neatly under the engine. It’s disappointingly quiet and doesn’t let the triple sing, and when you’re up it for the rent the induction noise is louder than the exhaust note.

The chink in the 09’s armour has always been its handling – it wasn’t bad, but it wasn’t up to the standards of the likes of Kawasaki’s Z900 (AMCN Vol 69 No 25), which is a sweet-handling unit. 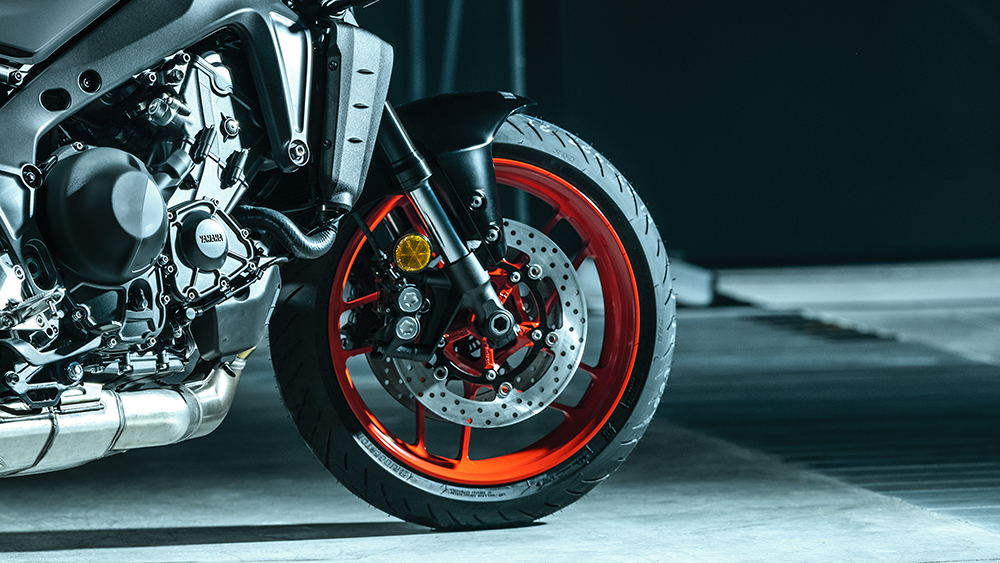 Yamaha has gone for the throat of the opposition with the new 2021 MT-09 with an all-new frame that’s more rigid but lighter, improved suspension and revised geometry. The headstock now sits a significant 30mm lower which forces more weight onto front tyre and obliterates the vague front-end feel of the previous model. Combined with the new chassis, this is a completely different bike – there’s not an area that hasn’t improved. It turns with purpose and conviction, holds a line with dedication and the feedback from the front tyre is rich and instant.

Adding to the MT’s new agility is a stiffer and lighter swingarm, a new aluminium subframe that’s 1.5kg lighter than the old steel one and a new set of 10-spoke wheels that shave another 700g of unsprung weight. The MT-09 weighs in at 189kg wet as opposed to 193kg for the previous model, a saving of four kilograms. 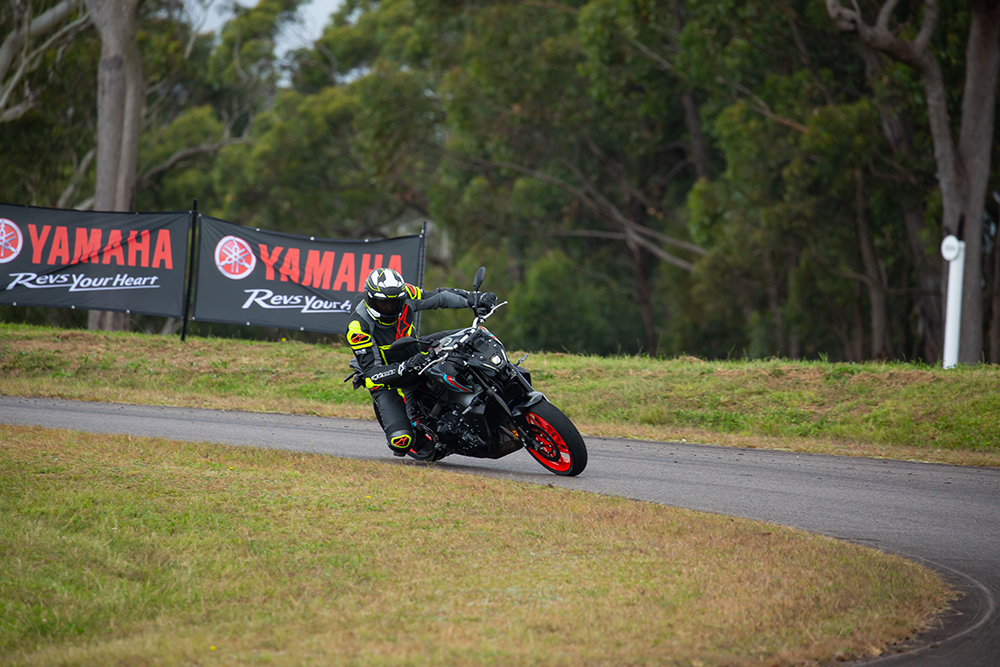 There’s a new 41mm fully adjustable KYB USD fork up front that is stiffer and shorter than before while maintaining the same 130mm of travel. The KYB rear shock offers preload and rebound adjustment with a new, more compact linkage. The KYB components are perfectly set up for road riding, there’s no harshness and they provide a soft and supple ride on most road surfaces, and it’s only when you hit the track that you’ll need to fiddle with the clickers to dial it in.

Like previous models though, I found the suspension comfortable but too soft for my 105kg, especially the rear. I preferred the performance of the SP with its up-spec KYB fork and fully adjustable Öhlins rear shock, which felt sharper to get turned and squatted less in the bum exiting a turn, although on bumpy roads it’s not as smooth. 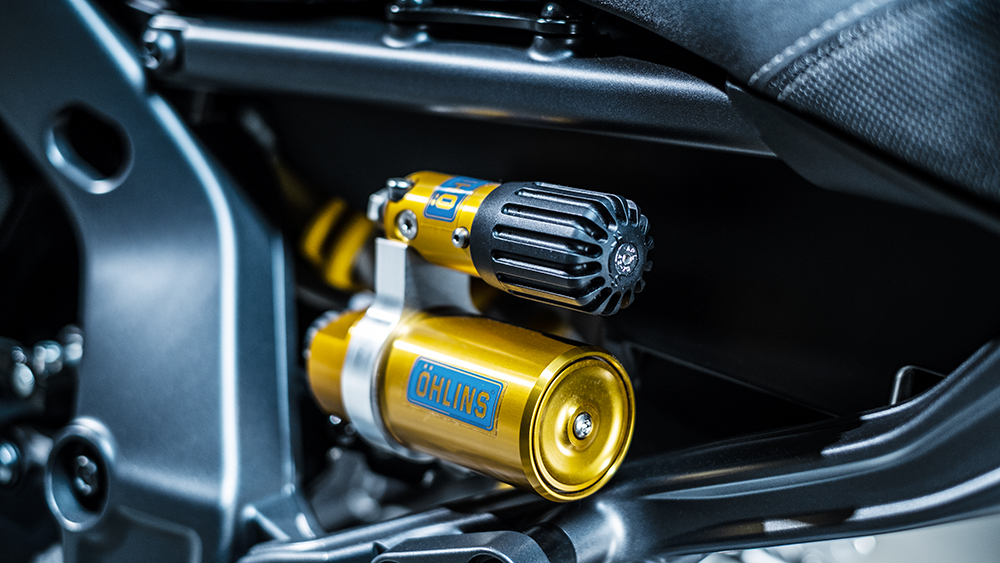 The new geometry and weight loss have transformed the MT; apart from the engine’s character it’s an entirely different experience. The MT has always been the bike you grabbed if you wanted to cruise around pulling outrageous wheelies, but if you wanted a bike that handled really adeptly, you shopped elsewhere. That is no longer the case.

The braking package has been upgraded and now uses R1-derived Nissin calipers, actuated by

a new radial front master cylinder. Rotor sizes remain the same at 298mm and 245mm. The brakes on the standard MT and the SP are identical but the SP offered a little more initial bite which could be down to pad material. 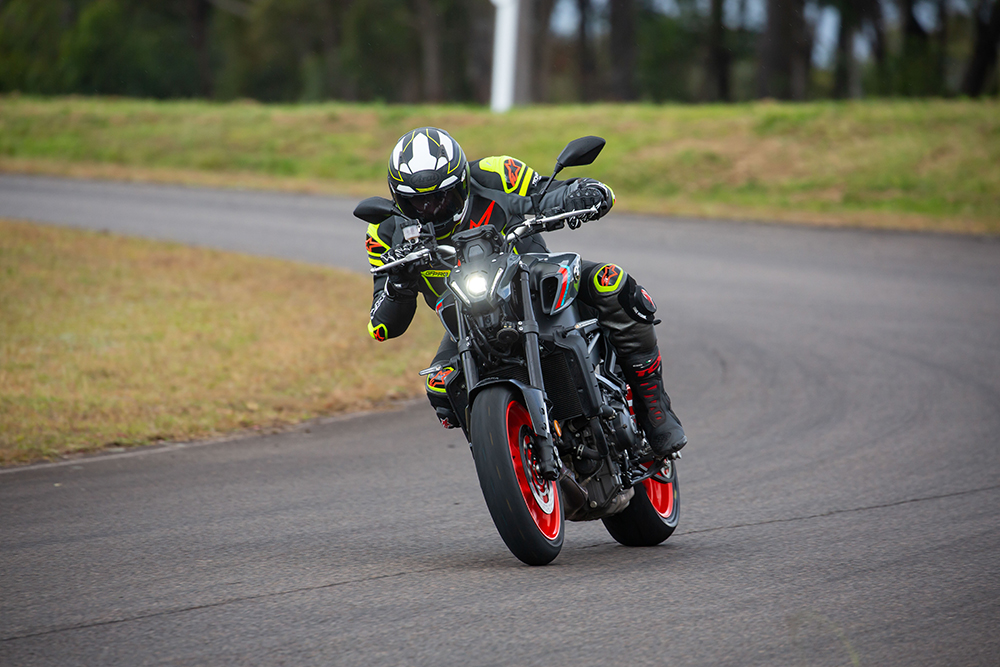 The new braking equipment provides good power and impressive feel, and neither on the track or on the road did I feel the need for more of either. In fact, on a particularly hairy corner that yours truly managed to overcook, I was able to brake relatively aggressively while still cranked over thanks to the oodles of feel through the lever, through the front tyre and with a little help from my cornering-ABS mate.

The 2021 MTs also benefit from a new R1-derived six-axis Bosch IMU. The electronics package is an area that the previous model was lacking, but now Yamaha has gone the whole hog; cornering ABS and traction control, slide control, wheelie control and ride-by-wire throttle. There are four power modes to choose from (1, 2, 3 and 4) and they adjust either the throttle response, power delivery or both. 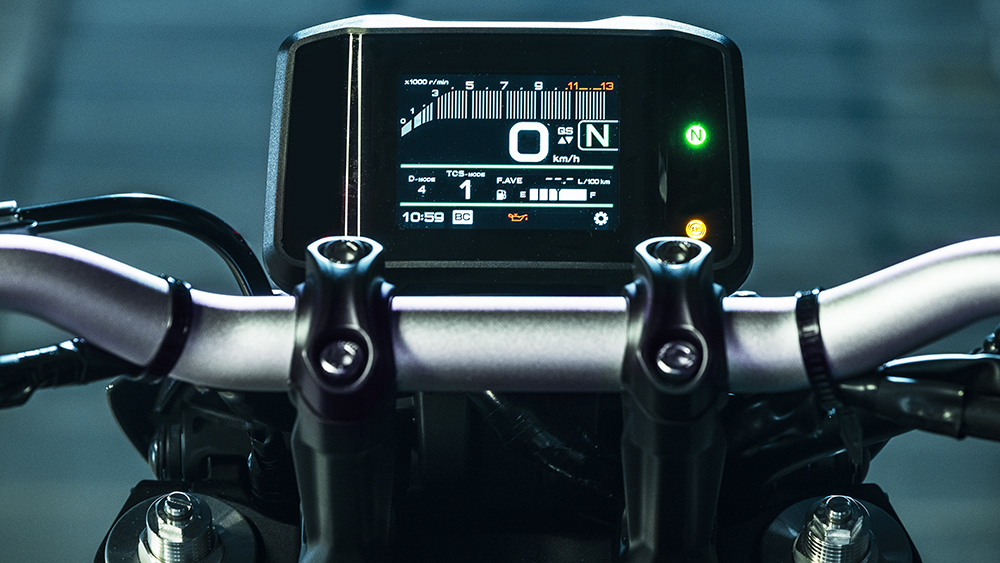 I found in mode 1, which is the most responsive, the previous generation MT’s throttle was too snatchy, and I fanged around in mode 2 which still gave me full power, albeit with a softer throttle response. Mode 1 still gives a very direct and immediate connection to the rear wheel, but it’s now much smoother than the previous model and I was content riding around in Mode 1 in most situations.

Mode 4 reduces power and throttle response considerably and, even in the extremely wet and slippery roads that I navigated, it was too dull for my liking and Mode 2’s smoother throttle response coupled with the high-tech rider aids, was delicate enough not to crash my brains out. Rider aid intervention levels can be adjusted via the new full-colour TFT display that’s easy to use and read. 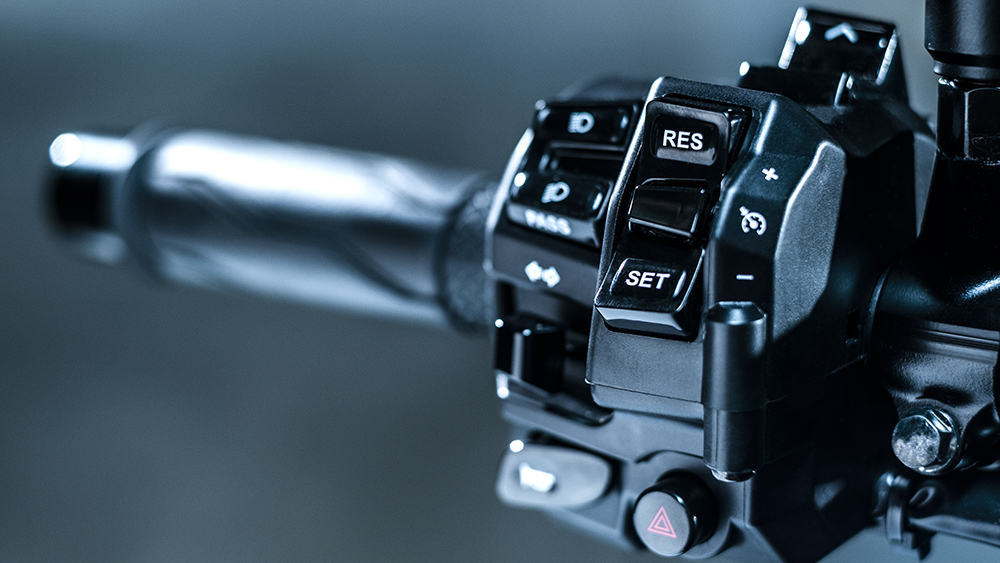 The menus are straight forward although it can take some time to remember where some of the more buried features are located, like killing the traction control. The SP also offers the same suite of electronics with the addition of cruise control as standard.

And the looks; it’s subjective I know, but social media has been aflame with talk of the MT-09’s new looks. Personally, I’m not a fan of the new headlight, but each to their own. The finish has stepped up a notch and the previous generations had a bit of a budget-bike look to them. The new MT looks far more premium – especially the SP with its pretty gold bits. 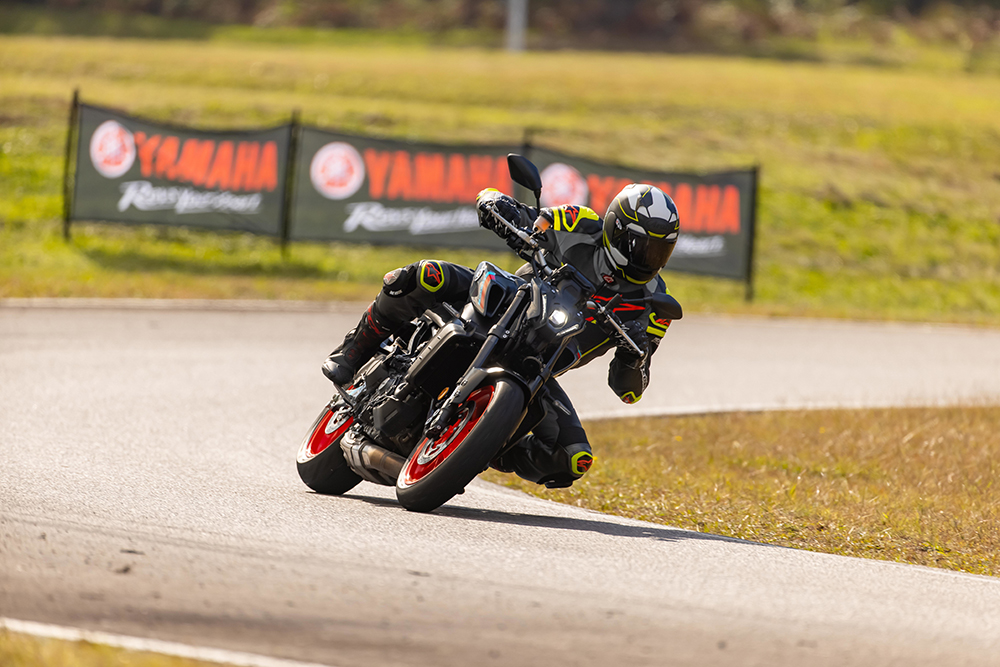 Apart from the styling, I reckon Yamaha absolutely nailed the new MT-09 and MT-09 SP. As a roadbike, the MT-09 has always been a ripping bike, but now it’s just better in every way. The all-new engine has copped a boost without losing what made the CP3 engine previously so engaging and fun and the first generation’s handling shortfalls have been summarily and definitively addressed.

The new electronic wizardry has made being a hoon or riding to work safer and at $15,249 for the standard MT-09 and $17,299 for the SP they still offer pretty good bang for your buck. 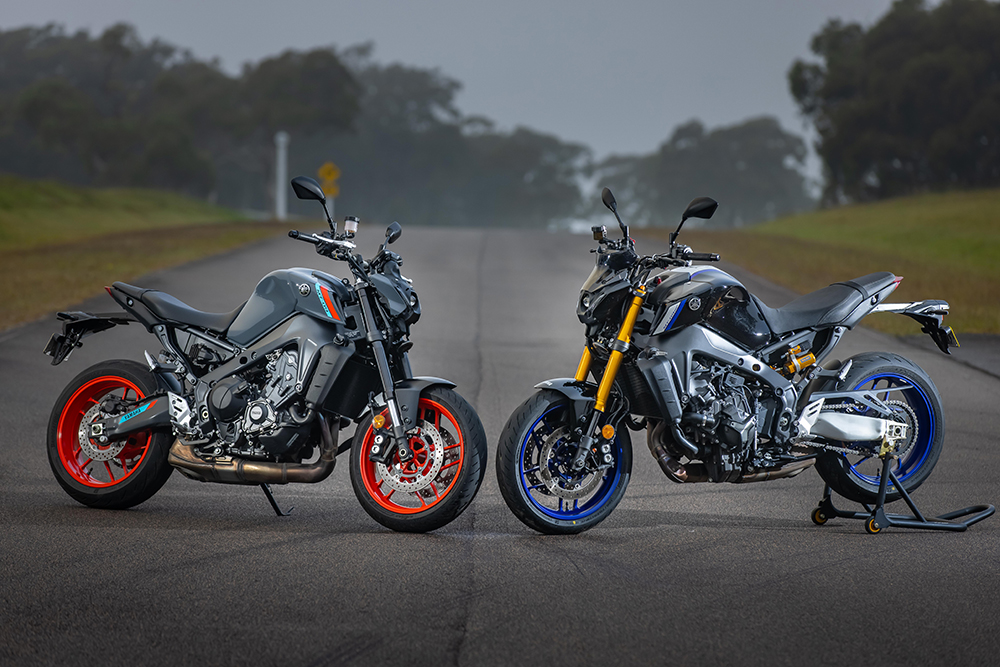